625 replies to this topic

Topa // No colony name // Camponotus subbarbatus
She laid her second egg! I think this means she is surely on the road to recovery!
No queen name // No colony name // Formica pallidelfulva
One of her pupae has started to darken! How long do you estimate before it ecloses?

If the pupa is now turning dark, any day it should hatch! Congrats in advance!

The nanitics have arrived for my Formica pallidelfulva queen! They’re so cute!

Also, I just got mind blown... I was looking on Antweb, and apparently Lasius niger doesn’t exist in Indiana. Of course, I know that’s not fully true, but it explains why I don’t see ANY at all in my yard.

Here’s some better pictures of my Formica pallidelfulva colony: 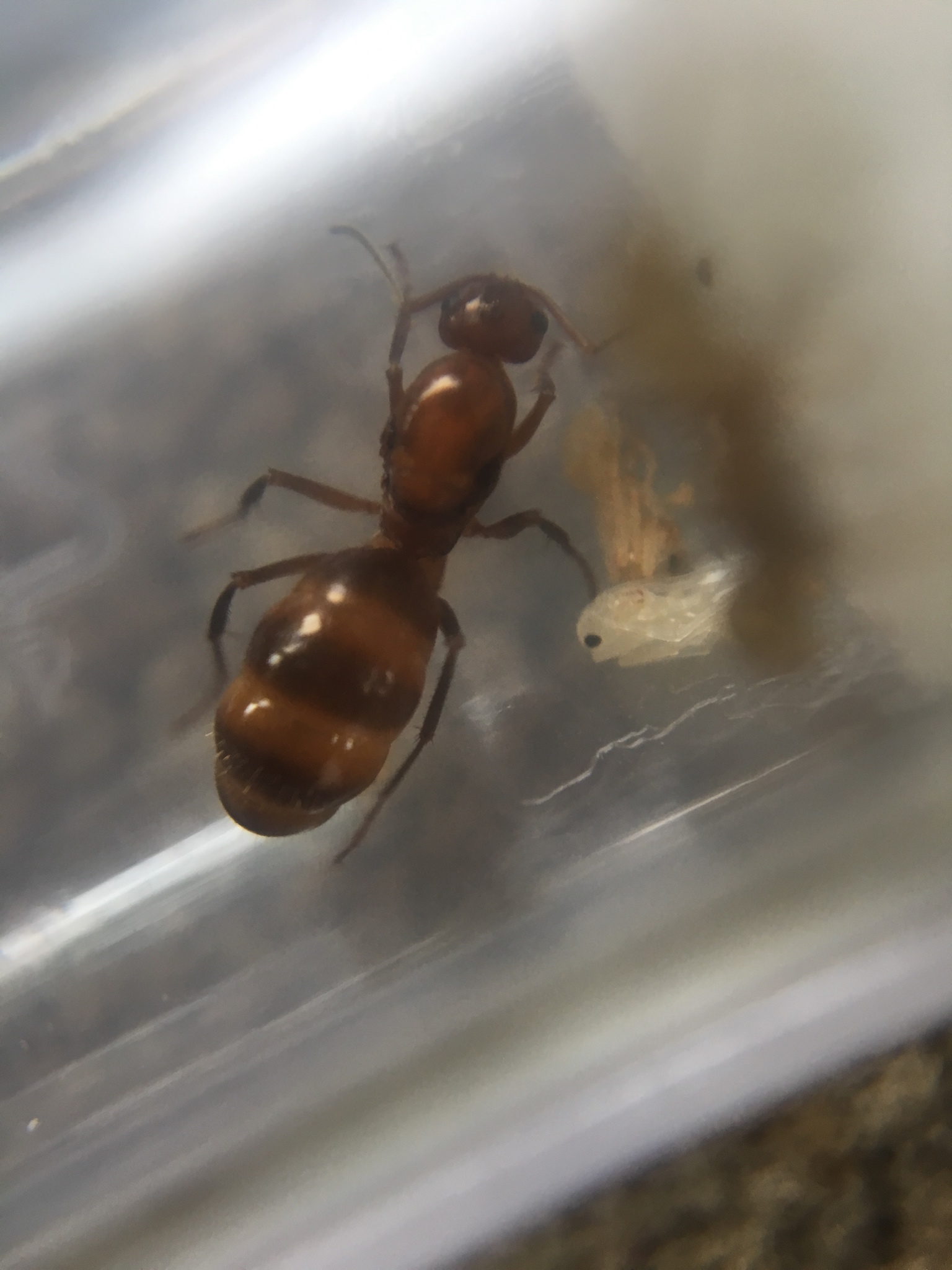 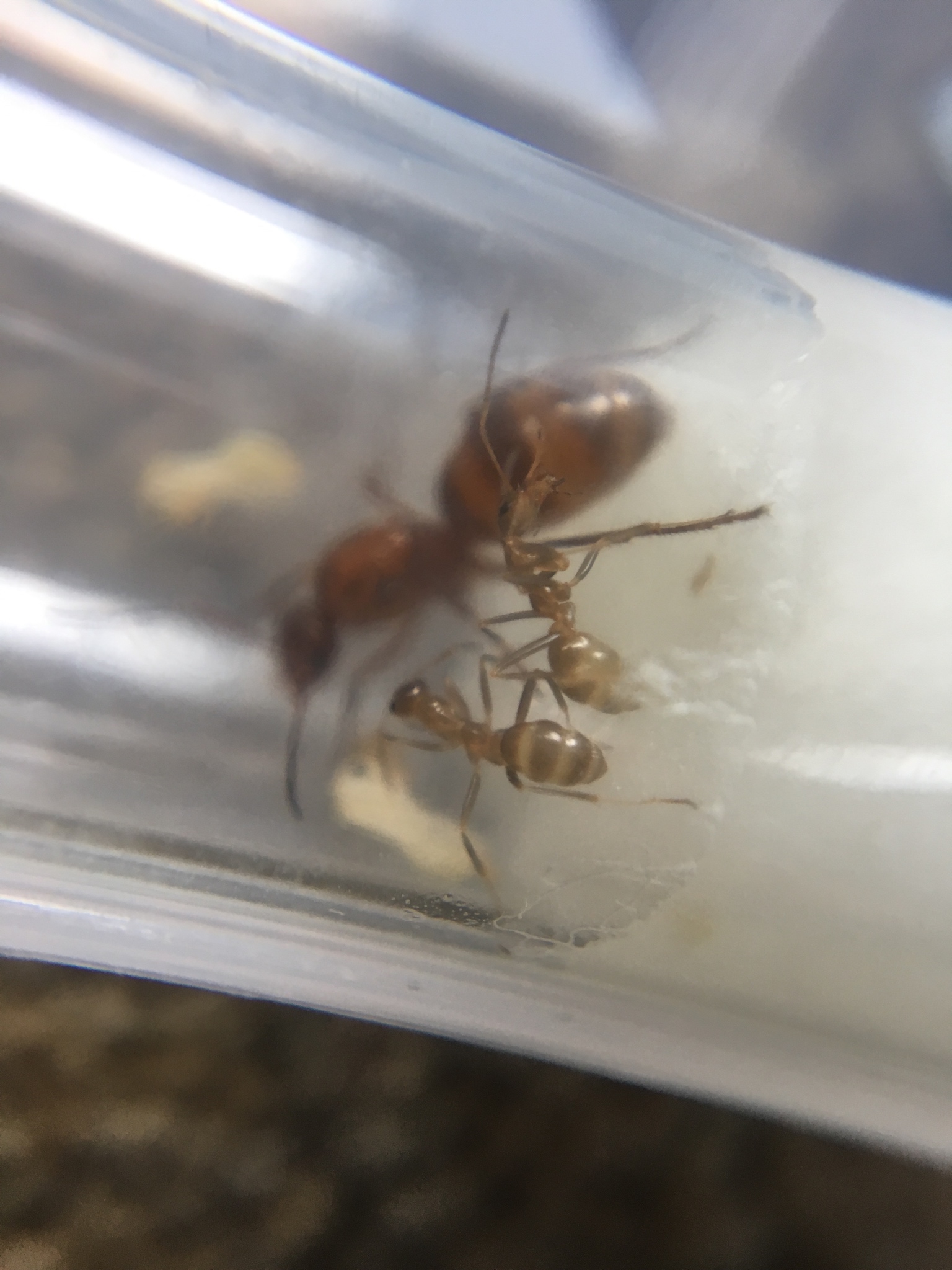 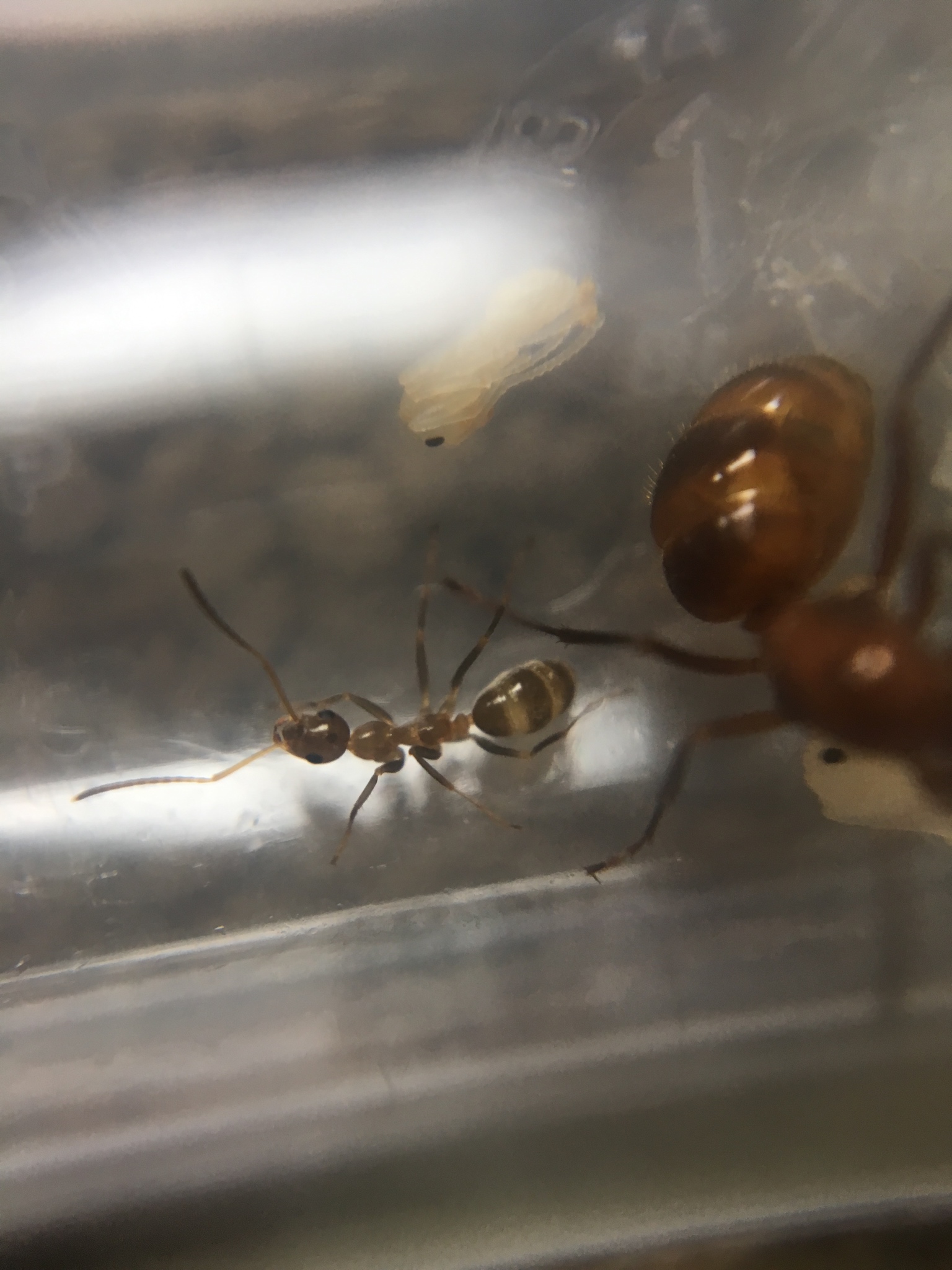 The reason I took photos is because I moved them to a new test tube, so as always, the images look better.

Time for a big update! Yet again, not on my Camponotus castaneus because they have dug where I can’t see them soooooo... ya. Also, all of my queens have just had a big meal of honey.

She is up to three eggs! I have been feeding her so that she feels more comfortable and doesn’t eat her eggs. I hope she gets workers before hibernation since she was set back! 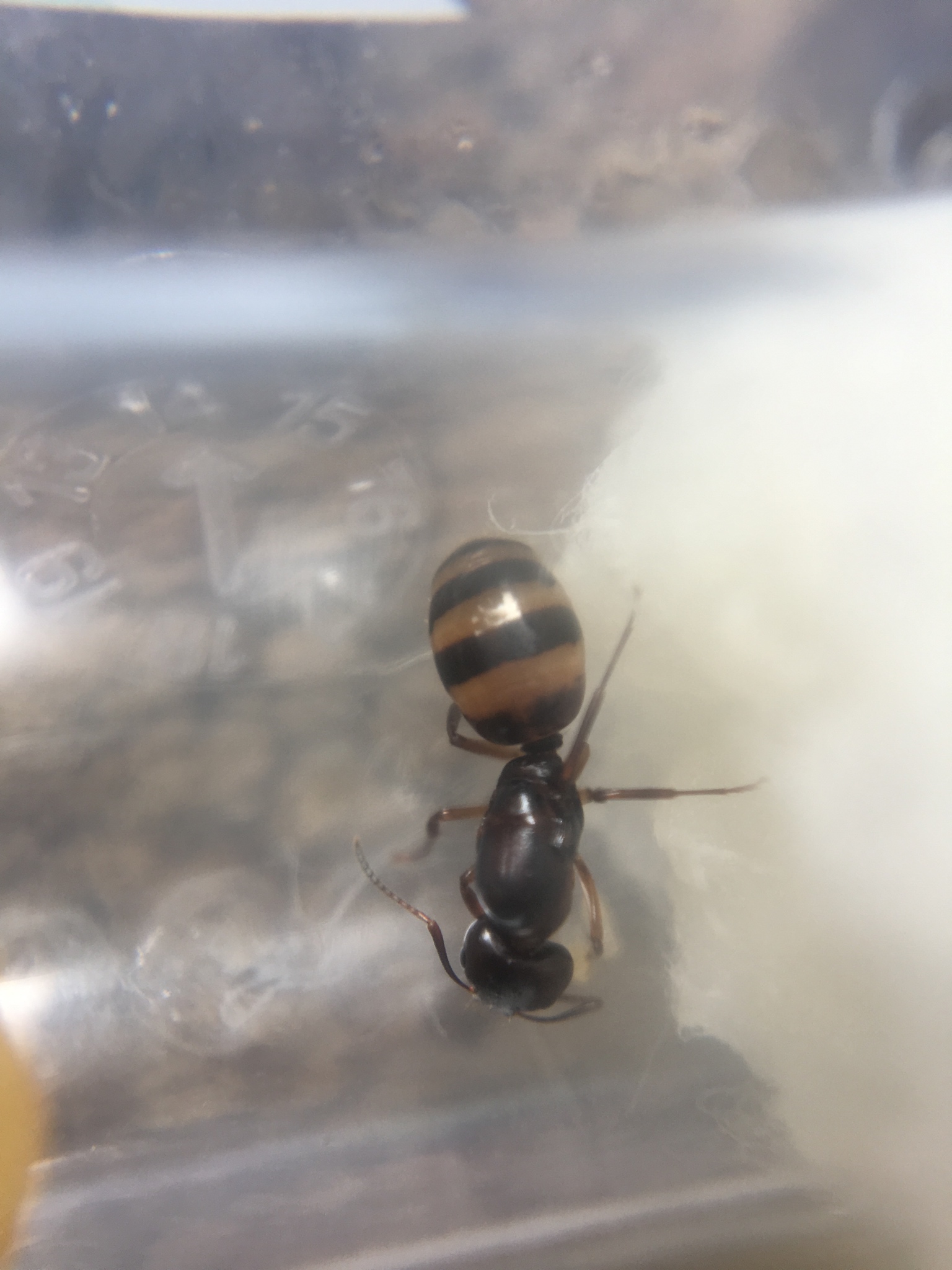 Her third nanitic eclosed! I wonder how dark the workers are going to get because most of the workers and queens around here are dark, but this queen is a lighter shade. Anyways, she had two more pupae, so that will leave her with five nanitics for her first generation. 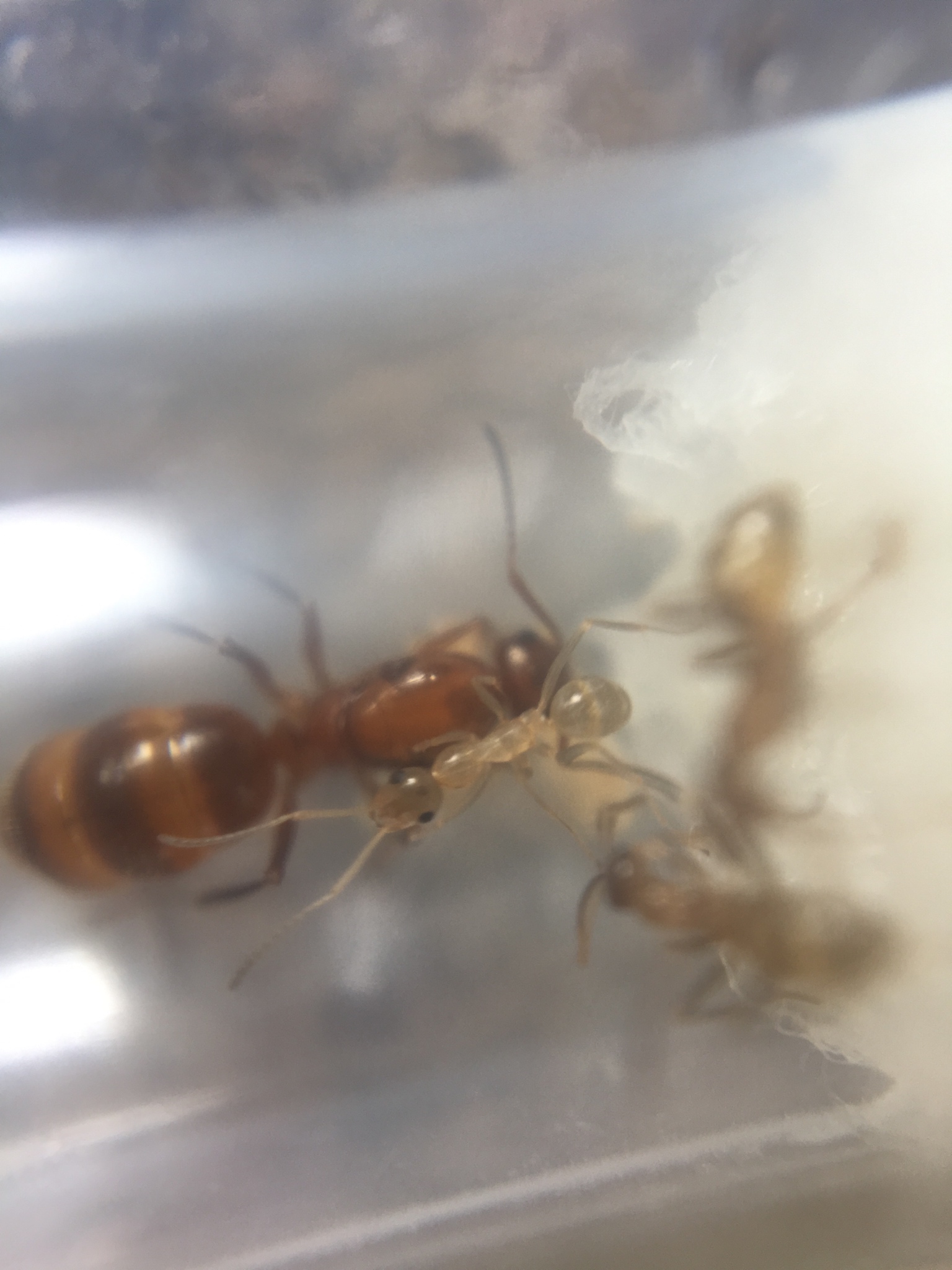 She should be getting her first worker tomorrow sometime! I am excited to raise a colony of these! 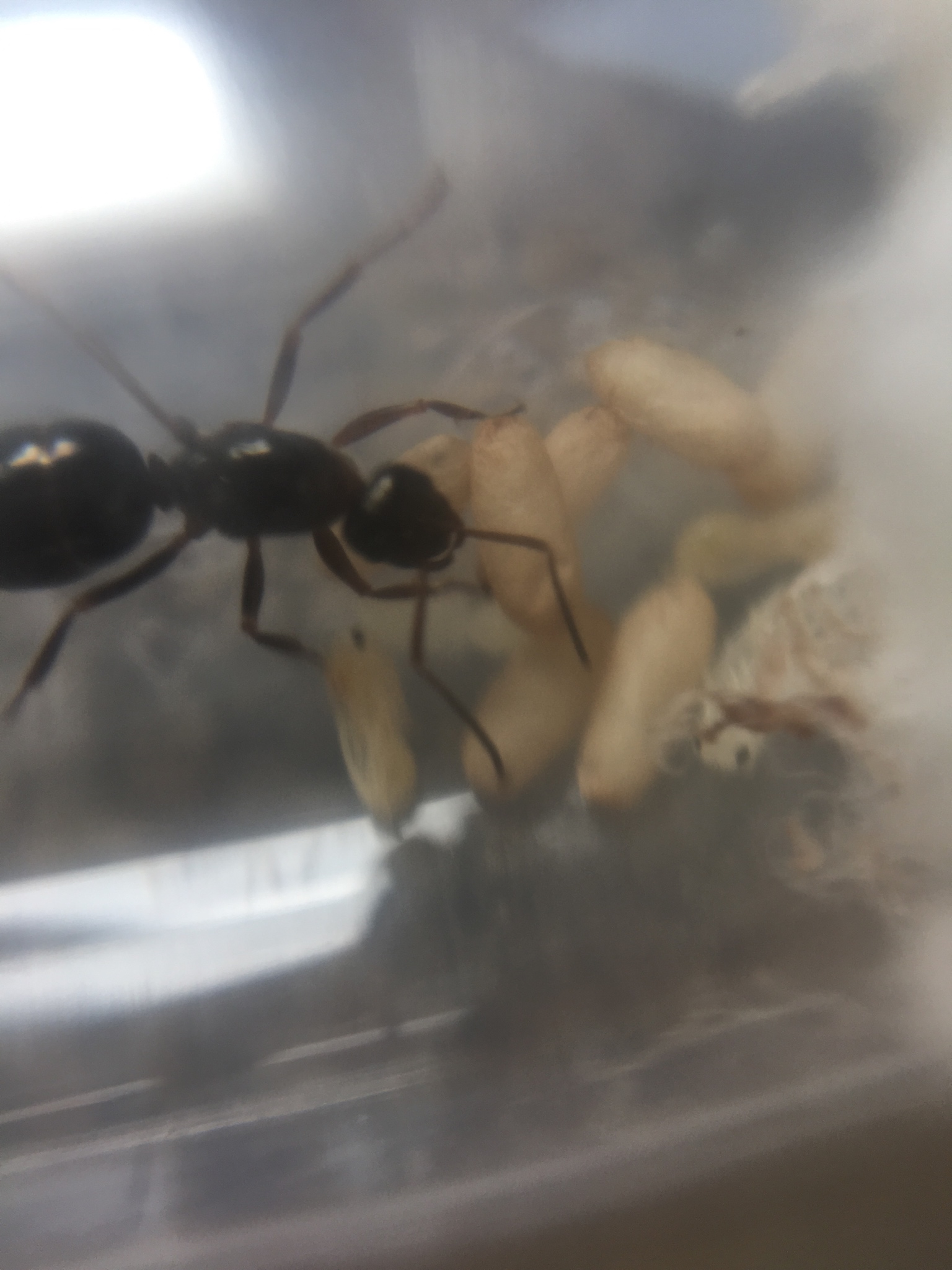 Her larva are getting pretty big, so I’m guessing they are goin to pupate soon! She will be the second to last queen to get workers, the last being Topa. 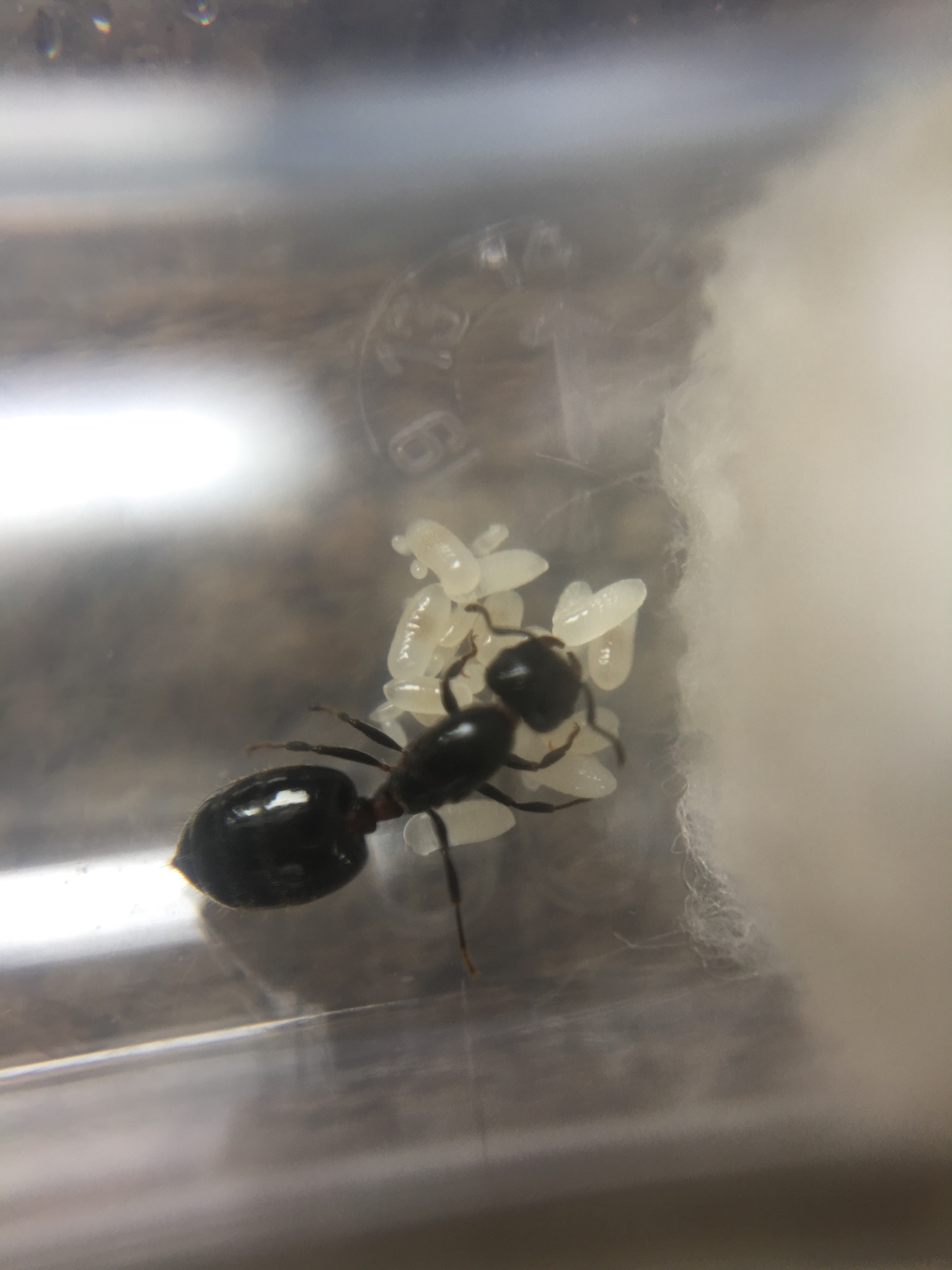 No queen name // No colony name // Lasius cf. something

I really need her to get to workers so I can identify her, or this is going to drive me mad! Luckily, she’s really close! 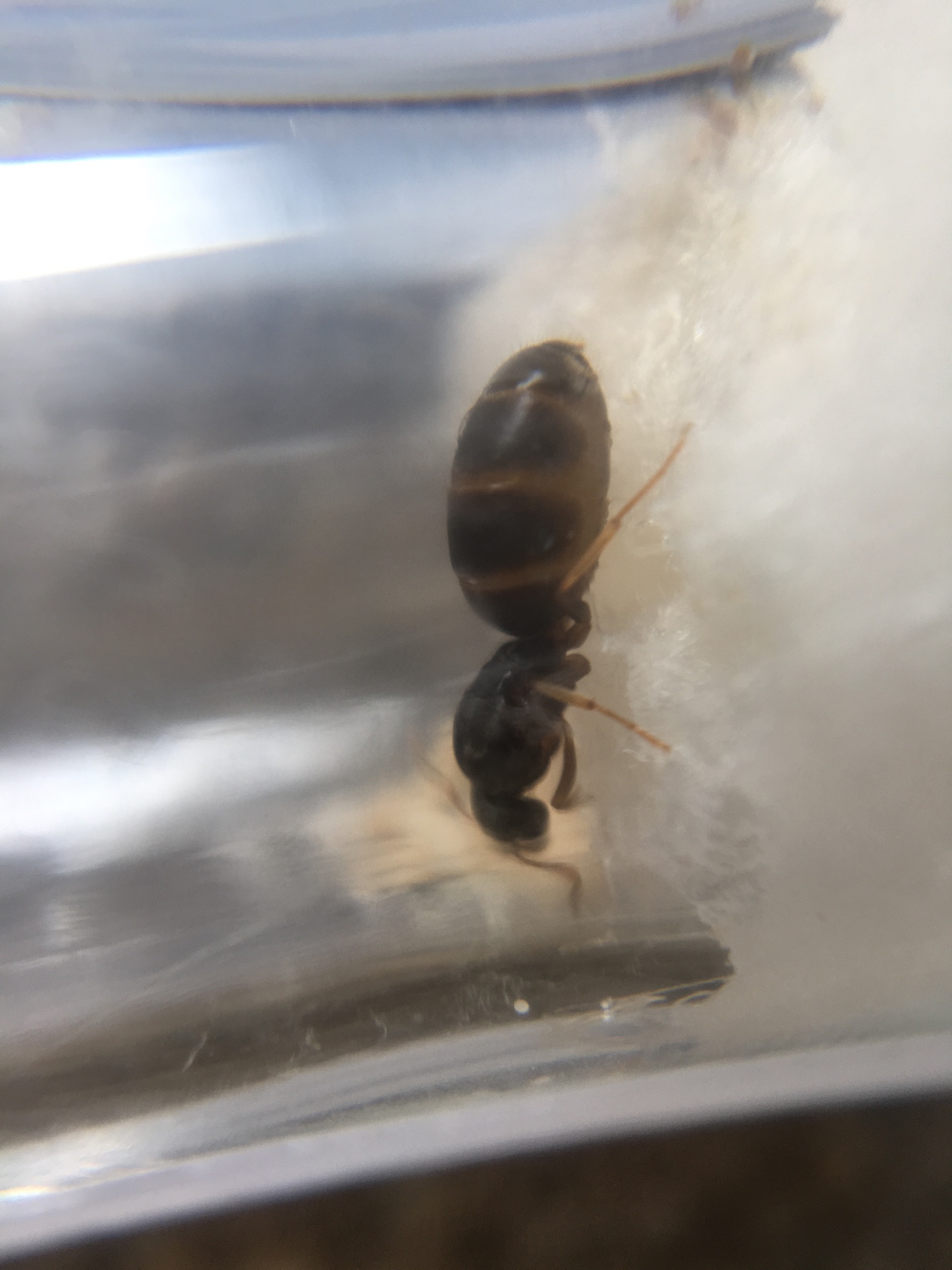 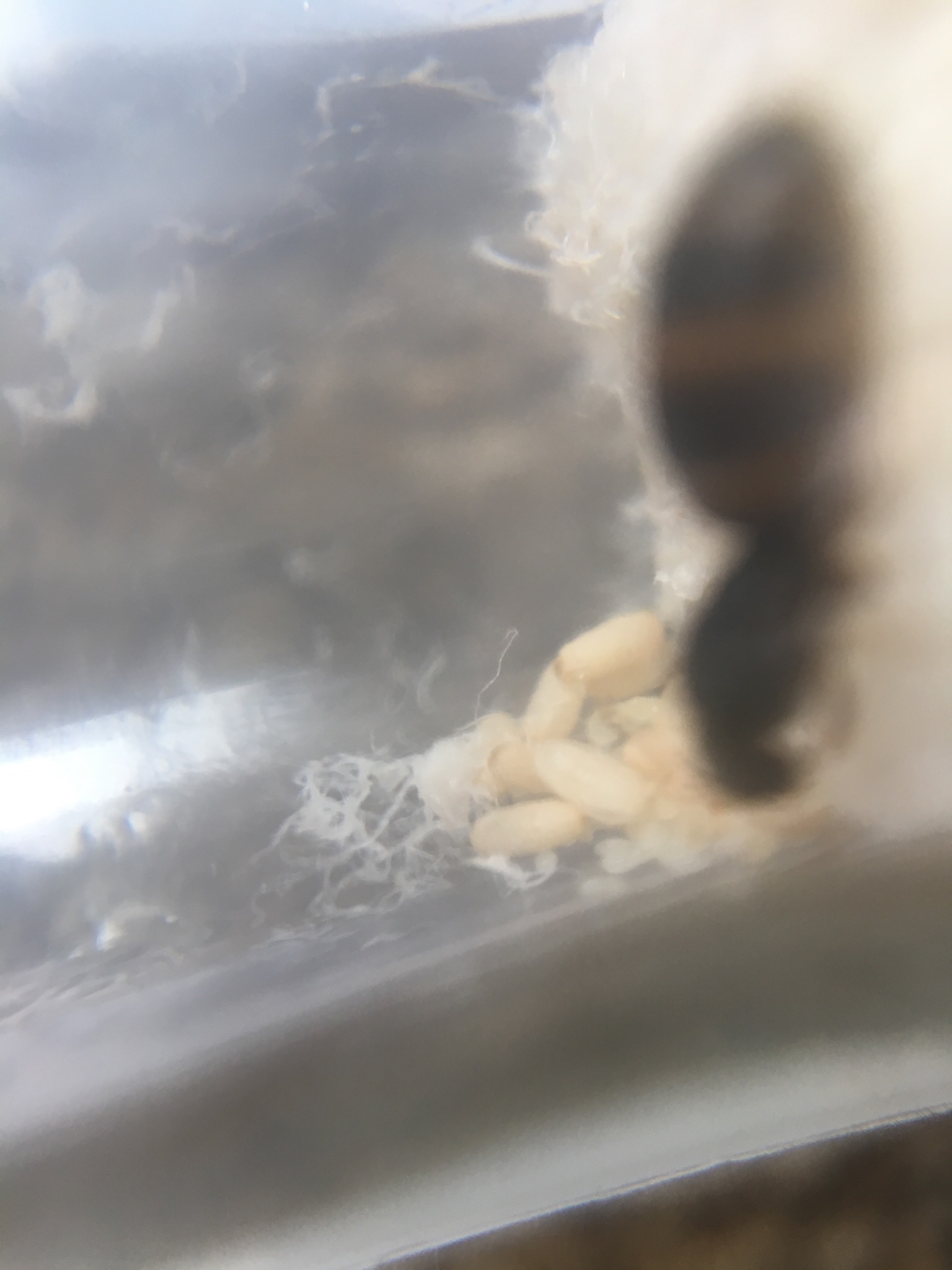 Disaster strikes! One of the three workers in my Formica pallidelfulva colony just died! I have no idea why, maybe they didn’t like the protein I was giving them because they appeared to be eating her... My Camponotus castaneus colony also started losing workers too, so I dug them a little nest where a found them and put what was left of the colony in it in hopes they would recover. This morning they were all gone, so I don’t know if they dug a new nest? Also, no workers have eclosed yet for my Formica neogagates queen, but they should eclose very soon! My crematogaster queen also just got her first pupae!


I believe that is part of the pupa. The queen will eventually eat it off. That happens to alot of my new workers.

Congrats! P.s. Formica neogagates is an amazing species to keep!

I believe that is part of the pupa. The queen will eventually eat it off. That happens to alot of my new workers.

Congrats! P.s. Formica neogagates is an amazing species to keep!


Good news! She did eat it off! Whew! Her second worker just eclosed, and she also just laid an egg. Honestly, I wasn’t much of a fan of Formica from the beginning, but now they are one of my top species to keep.

Disaster strikes again! Another worker just died in my Formica pallidelfulva colony, and both of the pupae are in the trash pile as well, that leaves the queen, one worker, and no brood... it’s not looking good.

Formica are very good species to keep. Their colonies grow EXTREMELY quickly! Back in Washington, I had a Formica pacifica colony that was only two years old, with almost two thousand workers! They were my favorite colony.

Time to do a picture update! I am now going to list the colonies in order from favorite to least favorite.

Yep, she’s my favorite now. I really wish I new how to use all the emojis... could anybody explain to me how to? Anyways, she is up to two workers and has nine (?) Pupae. This is honestly a very beautiful species to me because she is a nice jet black, but if you look closely, she has some orange on her legs. Here’s some pics (I moved her to a new test tube): 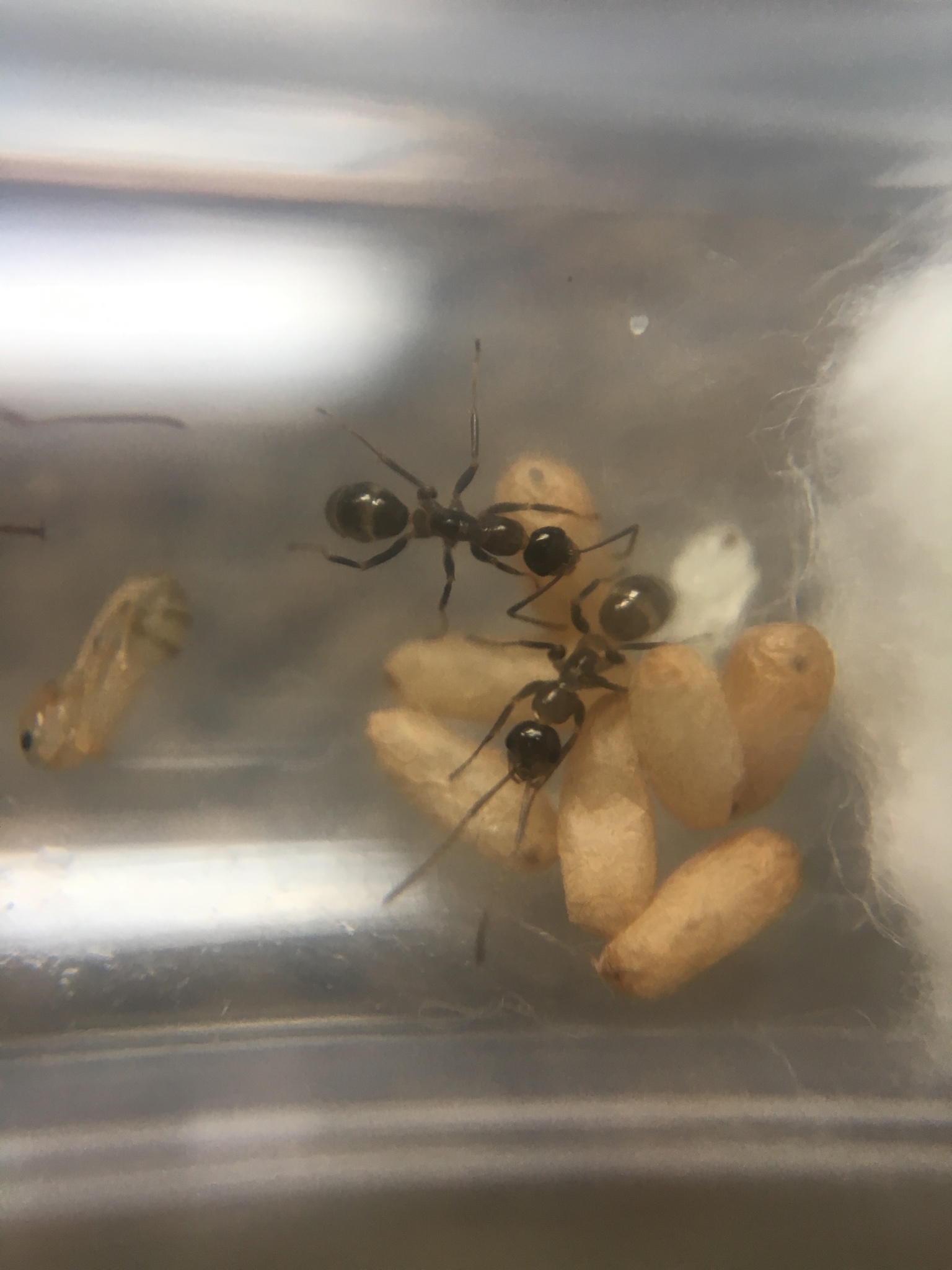 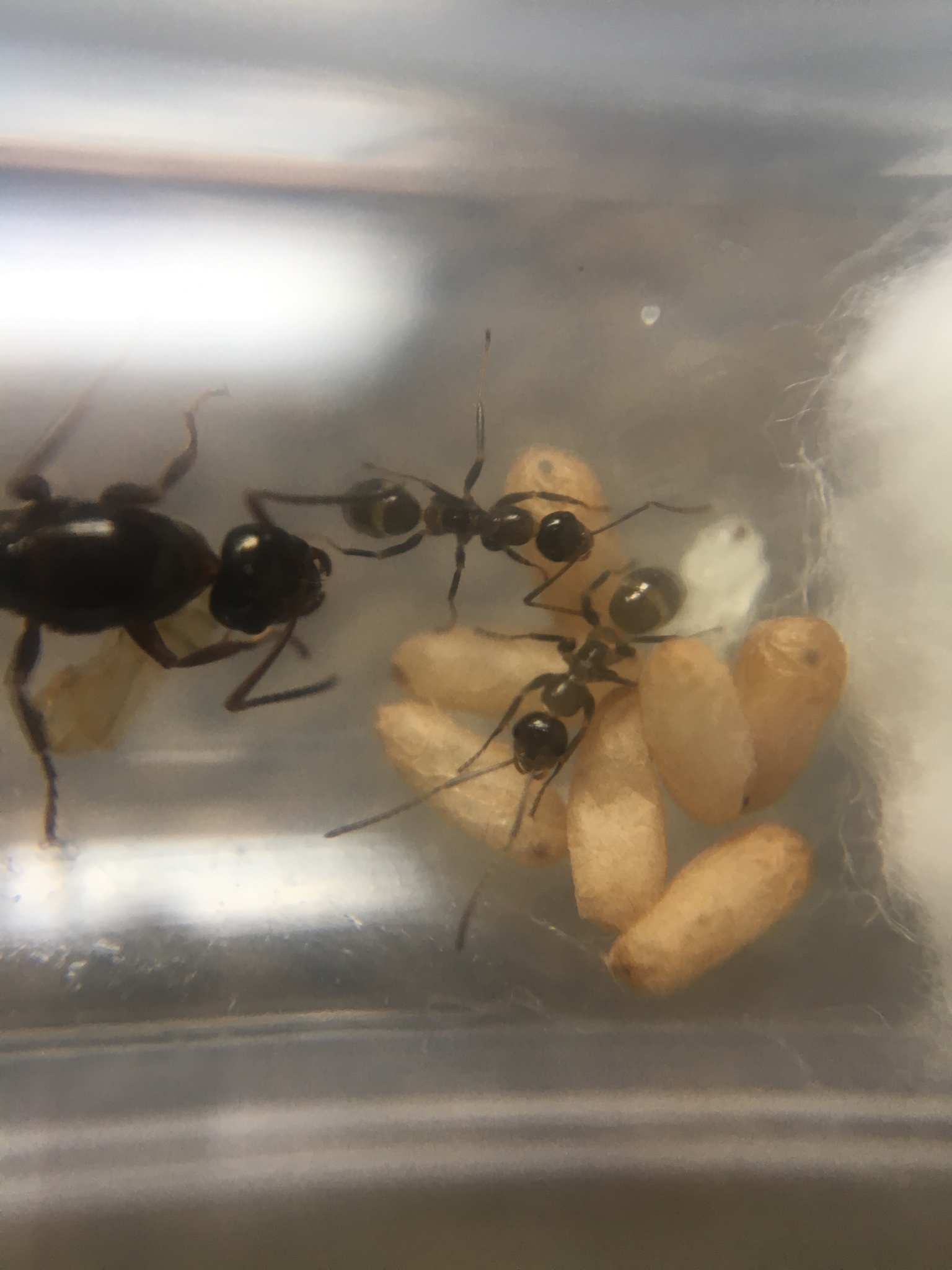 I’ve never actually seen any crematogaster ants before, but I got a good picture of one of the pupae! It’s heart shape gaster is so cute! I can’t wait for workers! Also, she’s now officially my second favorite! Here’s some pics: 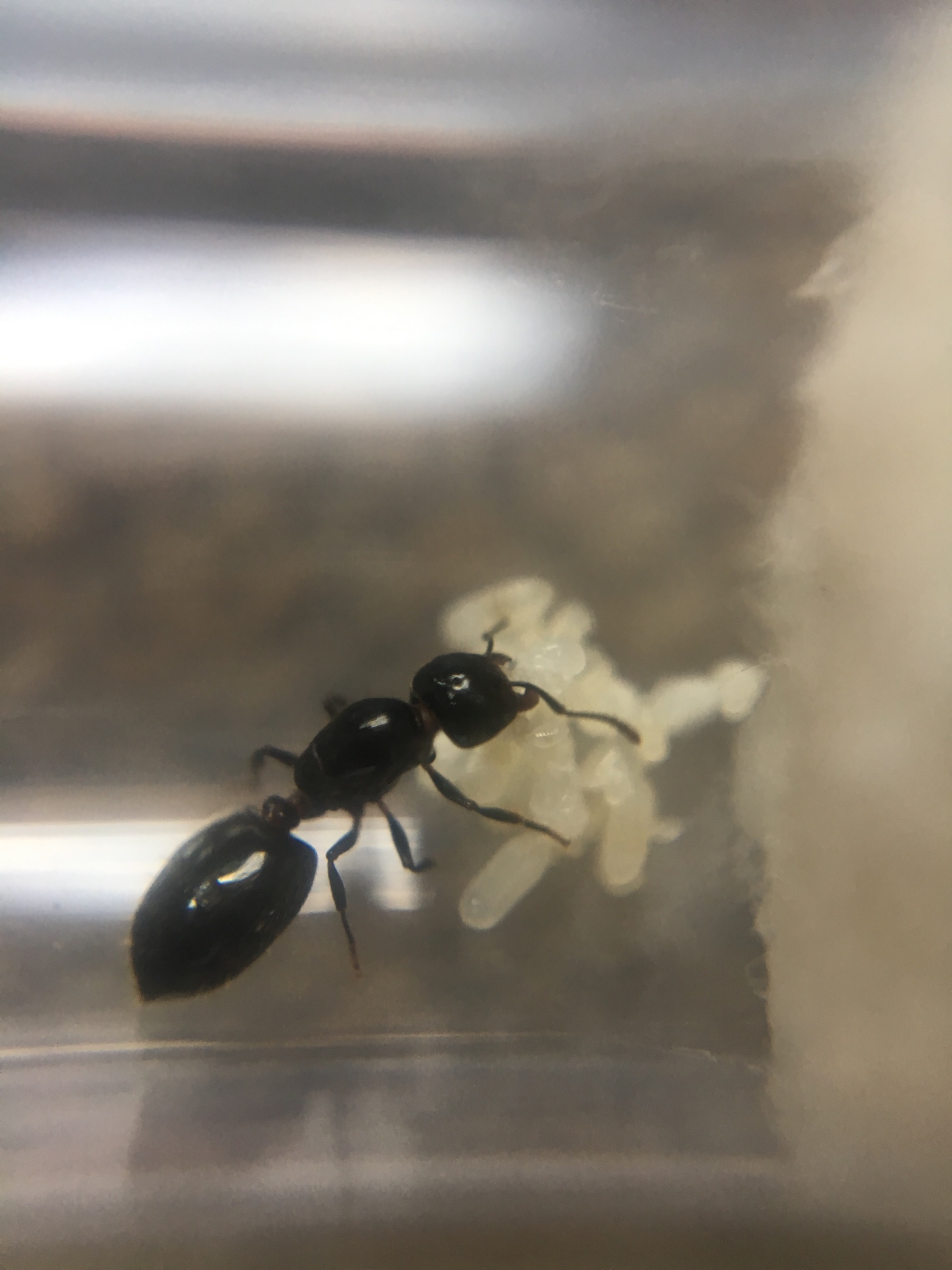 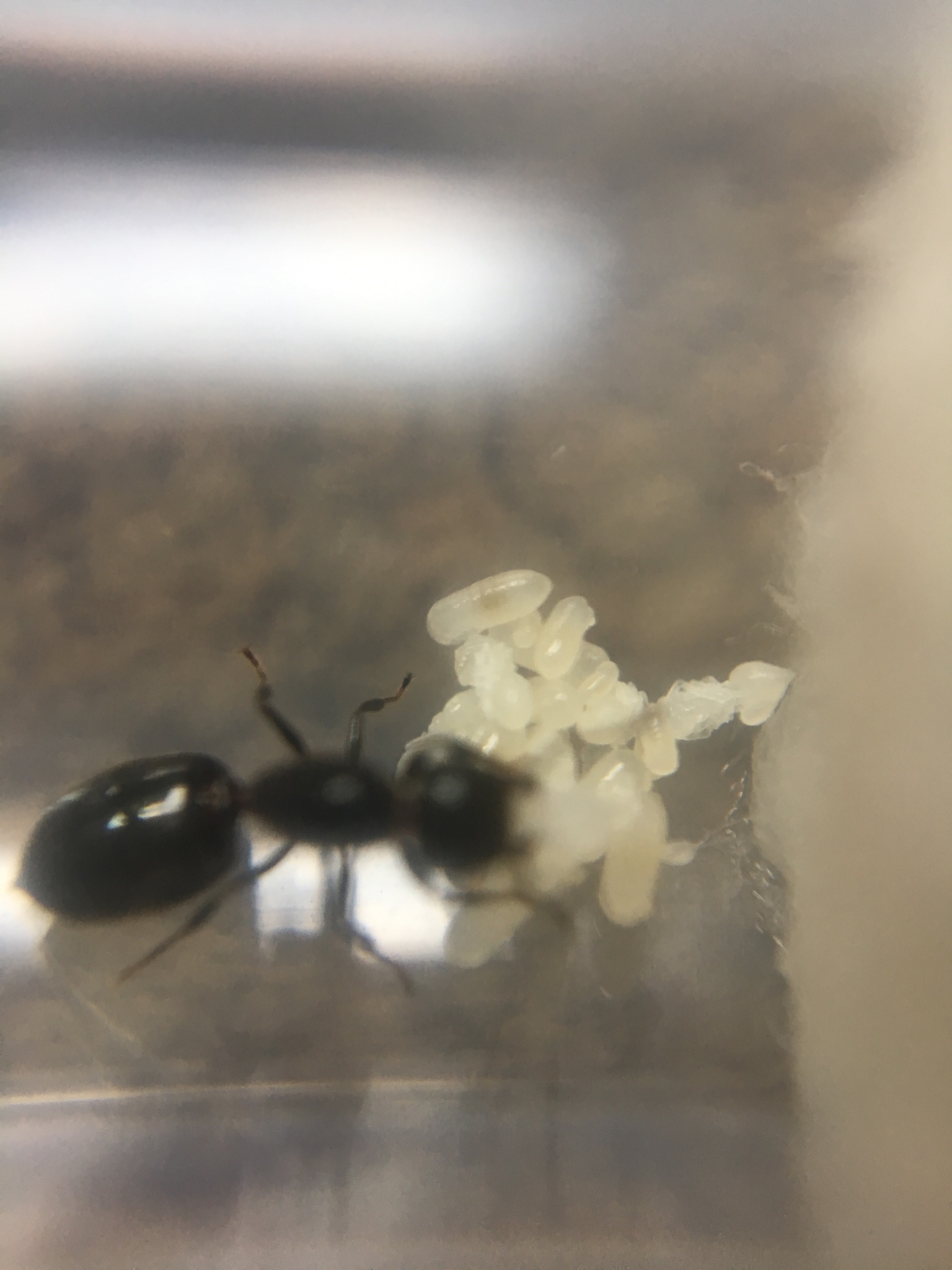 As of right now, she’s number three because I have nothing to look forward to in the near future, just eggs. That will probably change though if she gets workers! Here’s a pic: 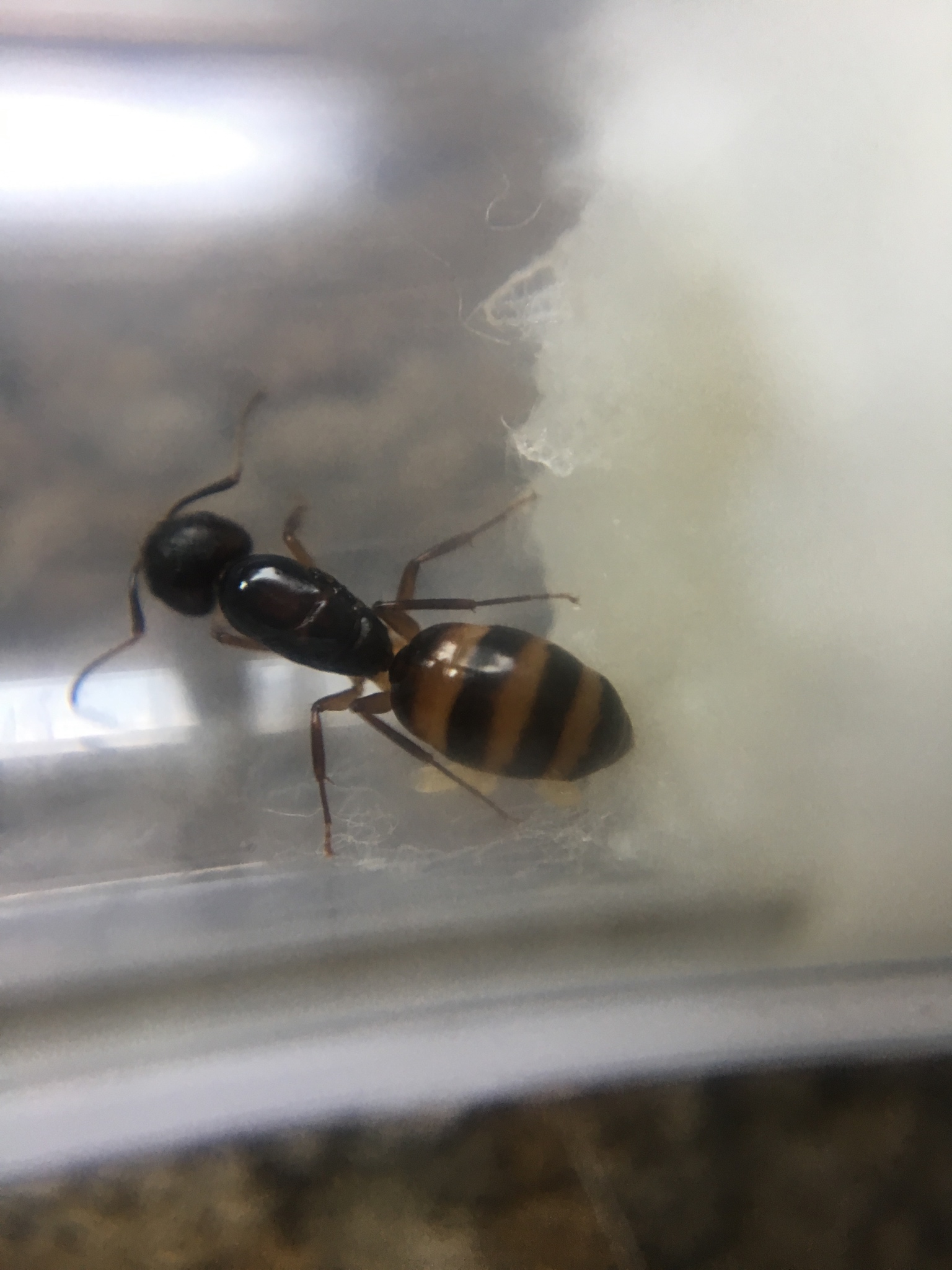 I really love this queen just as much as my others, and I am going to keep her for sure. She should be getting workers maybe within the next week! Here’s a pic: 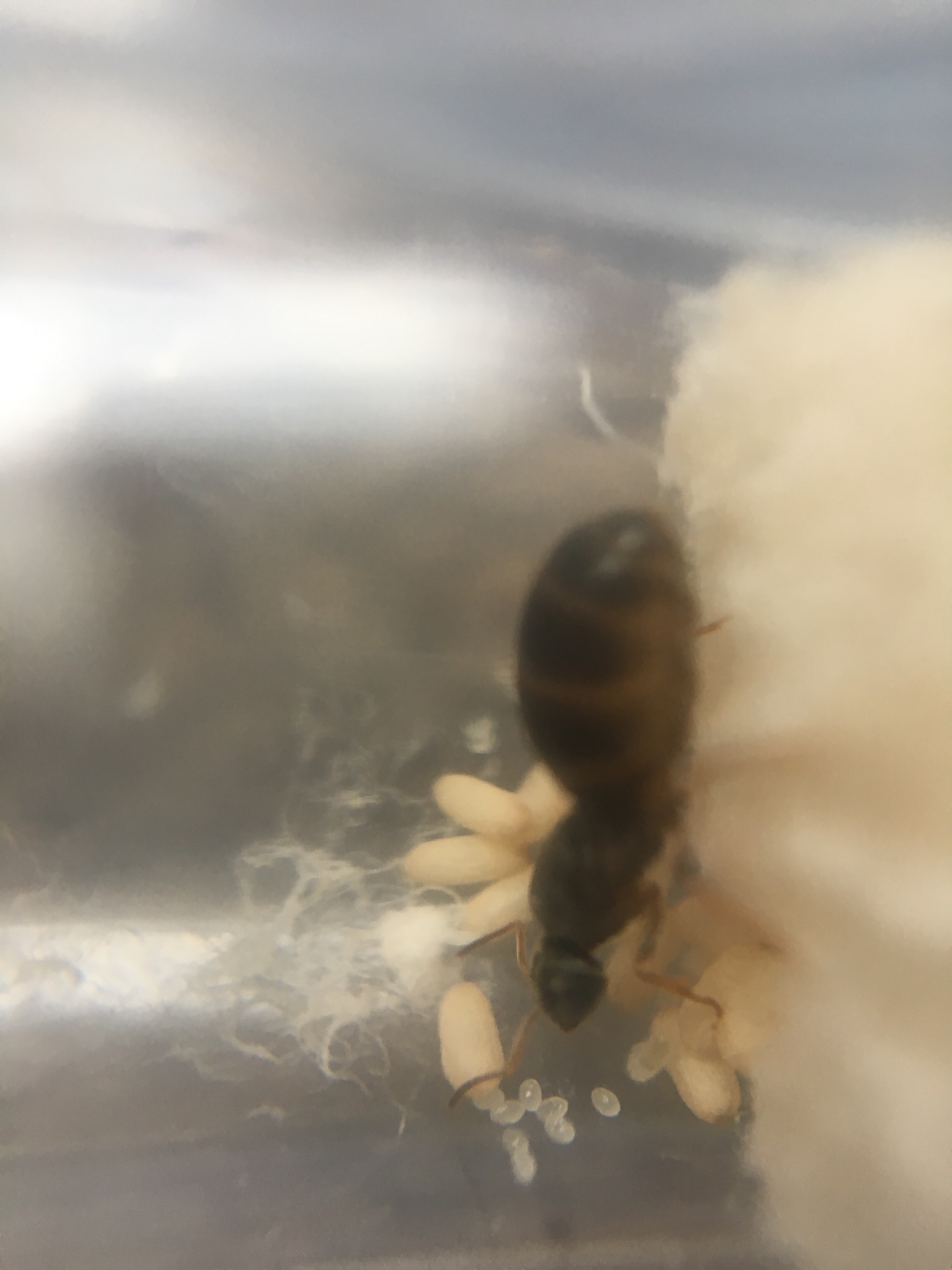 She’s really gone down on my list, and I don’t plan on keeping her long term since she lost so much stuff. I might just release her, my goal is to have four main colonies anyways. Here’s a pic, maybe a final one: 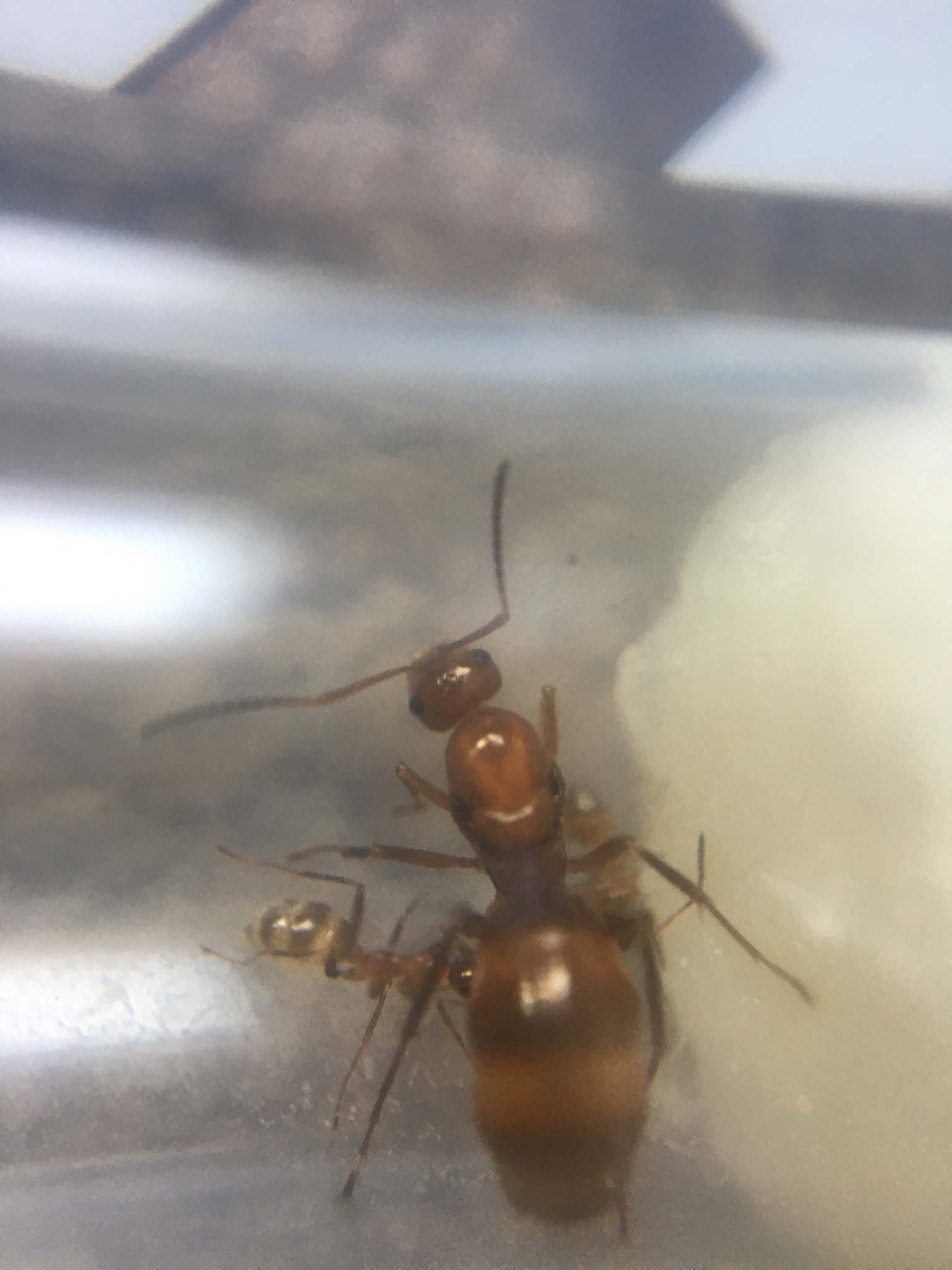 I find it funny how my Formica neogagates colony, when they freak out, they stick their heads in the cotton like ostriches.

Formica neogagates colony just got its third worker! They also still have eight pupae left, so if all goes well, I will end up with eleven workers for the first generation!

I was doing some research, and on two different sources, it says that Formica neogagates only get into the hundreds of workers, for they have small colonies! (I LOVE small colonies!) Also, they have four workers and the fifth in in the process of eclosing!

It seems that one of the workers in my Formica neogagates colony is in the process of dying? But I’m not worried, plenty more workers are on the way! Also, I just got three large bead containers for formicariums!

RIP, that worker has now died...

Long story short, I tried to move my Formica neogagates into a small formicarium, but one pupae was lost and I accidentally dropped the test tube on the queen! She was left without a scratch thankfully. Then I realized that the formicarium was too big for them, huh! So I moved them back and accidentally squished a worker. So no they are back in their test tube with 3 workers and four pupae. I’m so dumb! Hopefully this colony will pull through, because so far they are my fav.

Sorry for all of the spammy updates, but my Formica neogagates is now in great condition! They have settled back into a clean test tube (there old one had condensation all over it). I gave them a housefly soaked in warm water, then dipped in honey. They haven’t noticed it yet. Also! A new worker just eclosed, so that brings it back up to four workers!

My Formica neogagates queen is back to being herself, she just layed three eggs this morning, and I assume more are to come!

Spoiler
Back to Ant Keeping Journals · Next Unread Topic →

Also tagged with one or more of these keywords: formicarium, temnothorax, antkeeping, catsnants, blacklight, small species