Simple Discussion about my Kept ANTS

36 replies to this topic

Here id just like to share all my kept ants, without specifically keeping up on a journal. More about sharing ideas and questions !

Starting with my endemic species !

Formica Sanguinea, the raider formica i got as a queen with couple of slaves to whom i gave dozens of cocoons she gladly took in and already raised her own biological workers

Yup they where spring brood so couple of males and queens came out...

Formica Rufa, my all favorite wood ant (as specified in my personal presentation this species is widely protected in Europe, but weirdly enough not in my region) she got introduced by my care to a small serviformica group with pupae, after soem quick rough fight she got accepted and started lying eggs. Tho because of the red filter i never got see the bio workers of Rufa yet, as they tend to use slaves for foraging the first year. They are in Hibernation as for now so i hope to share more about them next year ! i did want here to feel in a established colony there for the numerous pupae and slave workers available to her foundation.

Formica SP Shiny black in 3 polygynous foundation, i had about 12 setups and they lasted up to only 3 now also in hibernations

My Cruentatus has been in trouble for one and a half year now, not lying eggs. I might have missed one hibernation wich i won't surpass this year.
The Aethiops has 3 workers and is also into hibernation right now.

My Solenopsis Fugax, the smallest species i have ever kept. I am not very into tiny ants but the foundation phase is for me the most interesting so when i found one drowned in a water bowl outside got her in and found her moving i couldn't help myself but trying to give her a chance AND it worked she won't be hibernating this year, as it appears she won't need one in her first founding stage. The fact that she prefers to make her own founding chamber felt interesting enough to give it a shot, two workers for now and much more Incoming ! 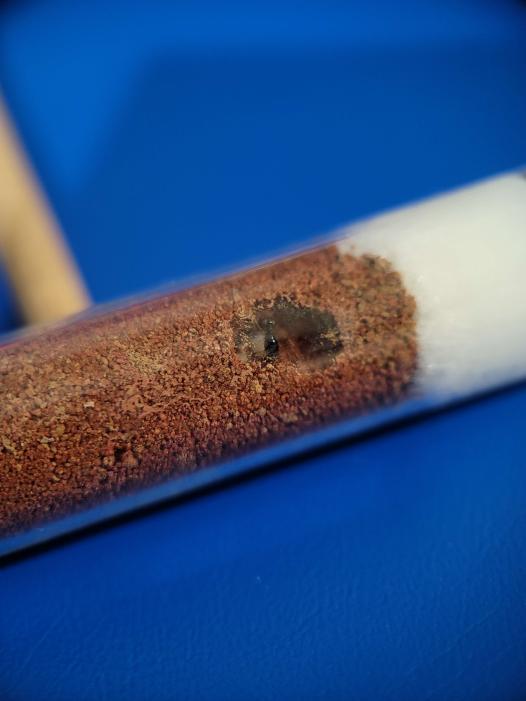 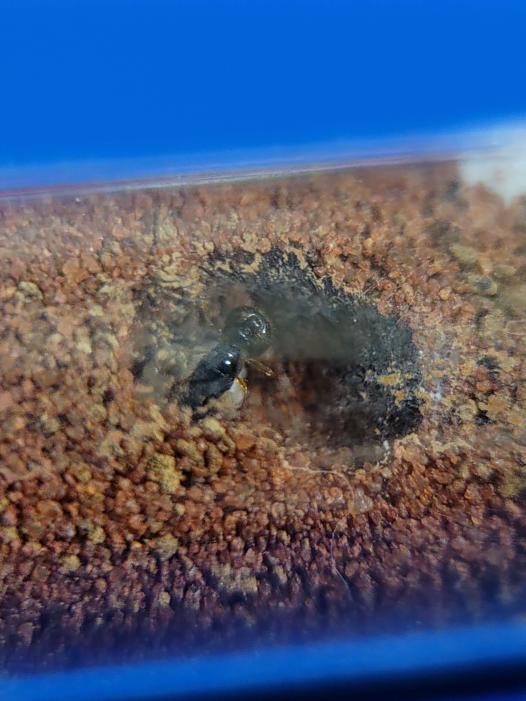 Now to my "Exotics" not much for most of you people !

My young M.Mexicanus colony now living and a substrate natural setup and having great foraging life and ongoing digging ! not much to say about them other then that i can try out different feeding experiences. Half a dozen epmty cocoons have been scattered since they dug them self up. Here they are, after i recovered my queen from a big mistake of mine.. unless her sperm got fried she is fine and alive

I also have a Mexicanus queen in a yellow color which seems to be infertile, she will be exchanged by the seller next week for one with larvae, she will get some special attention to !

The last honey pots i have ar M. Placodops, they also had a rough start being my first honey pot ants i didn't know much about their care and lost the first generation (due to heating problems i suppose) but for now all seems to go slow but fine. Having one large "media" pupae, couple of larvae a small egg pack and 4 workers.

The next on my list is the most "sensitive" my Myrmecia Nigriscapa, damn her and her emotions she won't lay eggs anymore having consumed her brood on arrival. She now went on a forced hibernation at 15C for 2 months, which i hope will rest her for that time and giving her the push when the heat comes back to lay.

Her one meter sight is no joke, the day i got her i wanted to maintain heat and watch her closely without disturbing, but all she did was looking at me from one and a half meter away before i put her in the dark.

The next exotic is and Ausie as well, the meat ants ! Irdomyrmex Purpereus, hasty tough and agressive one they are. They now have grown fast and are takign in any insects i throw in, I'm sure at some point i will give them some dinner meat rests and they will chew it to the bones.

For my the next ant it is a Camponotus fedschenkoi, i just love the yellow pale colors they have and also the fact that they live in arid conditions. They have grown well and are now in a small THA nest.

Here in comparison with a Mexicanus queen in the background

The last one to speak of would be my last bought queen, my Messor Cephalotes. I started with a Barbarus 15 years ago kept them for 3 years. Learning that they where bigger and more colored version of them made me dream about them and this year i got my hand on them, for now they don't leave they founding tube even tho one small cockroach disappeared once dropped in the tub.


I have several THA nests ready for everyone of them once needed, i don't feel like settling them in before they crave for it. Only one of my honey pots will settle in a mini hearth next year, wich one i can't say yet.


Thanks for reading and leave me any question you feel for asking i would gladly respond !

Assuming your cruenatus doesn’t have workers it’s very likely that she is sadly infertile.

She has one, she had brood. I have no clue what happened. So now she is just resting for 3 months, unless the seller did boost her

thanks, does any one have any idea on what insect protein to give to my mexicanus colony ? small cricket do only interest them fresh, even 10 mins out in the sun and they won't take it in the nest anymore ...

i will try out Canned Crickets, maybe the juice will suffice and keep the meat/protein moist enough

Woopsy, i might have forgotten to mention that i also keep two leaf cutter Species.

I have no idea how i forgot them, maybe because i just have to get them leaves once a week at the moment, ahah

i count my self very lucky to be able to watch those species at my place, its just fascinating.

Small PS as i don't keep a journal for them, my Messor cephalotes have their first Major larvae growing !

My myrmecia is gone to hibernation (just in a drawer in my room where its like 13 to 15 C° at the moment) only because i did not respect her earlier hibernation, she seems fine with it, we will see in February if she starts laying eggs again after a year.

But I'm still concerned about my Yellow Mexicanus queen, she first of didn't ley eggs or ate them. Then i boosted her with a cocoon and 2 larvae from a deceased queen, she so now has a worker and has started laying eggs again, how much time before they would hatch into larvae ?

thanks, does any one have any idea on what insect protein to give to my mexicanus colony ? small cricket do only interest them fresh, even 10 mins out in the sun and they won't take it in the nest anymore ...

My mexicanus have taken chopped up mealworms, crickets, and fruit flies. When I don't want to deal with a ton of leftovers or a mess, I do fruit flies. They always take them and they keep the glass and acrylic clean too.

i will try to put the protein in the coolest place of the outworld, hoping it doesn't dry up too fast.

I just remembered that i have about 300 frozen fruit flies in my freezer, so i dropped a dozen near the nest entrance and workers immediately came out and grabbed them in the nest.

Just read through your journal,nice colony.

Just found a picture i took of my Messor Cephalotes couple of weeks ago.. I have now spotted a huge larvae, Pretty much as large as the queens abdomen ! maybe a Major ?

And also a picture i found of a species i have dreamed to keep for some times and got my hands on years ago, but sadly they died out. Bad care, bad transport conditions ? Why not the atta sexdens species.

Why not the atta sexdens species.

It is a glas plane, a simple large window with only 2 cm spacing in betweent glass panels. I doubt it would hold any growing atta colony for very long

Also tagged with one or more of these keywords: formica, camponotus, myrmecocystus, iredomyrmex, myrmecia, solenopsis, messor