I collected a colony of this species in a forest mostly dominated by invasive buckthorn trees, but the twigs were beside a native tree. There are not acorns in this forest, so almost all the colonies are in twigs if they are not nesting in the soil. I snapped open a twig and noticed ants, so I dumped the twig into a tube by tapping it on the edge of the tube and blowing through it. I noticed immediately that there were orange workers, but a dark queen. A few moments later I noticed some workers that appeared to be pilagens.

I am not 100% sure that this is pilagens. None of the dulotic workers have died, and so I have not been able to put them under a microscope. It is possible that this colony is Temnothorax duloticus, but considering the proximity of the worker I caught and identified as pilagens, it is likely that the latter is correct. As soon as a worker dies, I will identify it. For the time-being, I will consider them pilagens.

I've already fed the colony a cricket and some sunburst. I'm unsure how much of the brood is pilagens, but I do know there's not usually very many pilagens workers in the average colony. If anyone has any advice or suggestions on what I should do, or knowledge of these ants, please share. 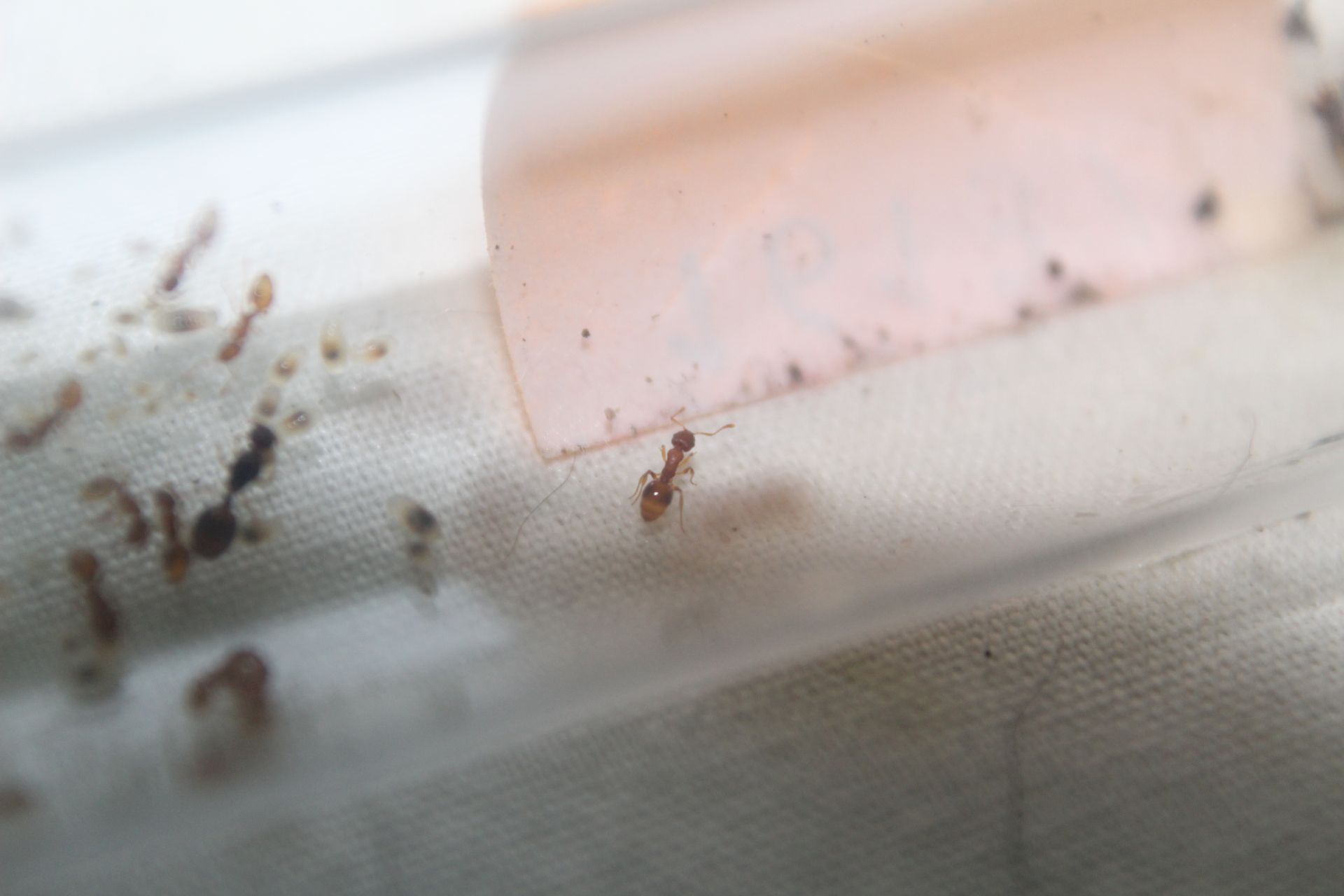 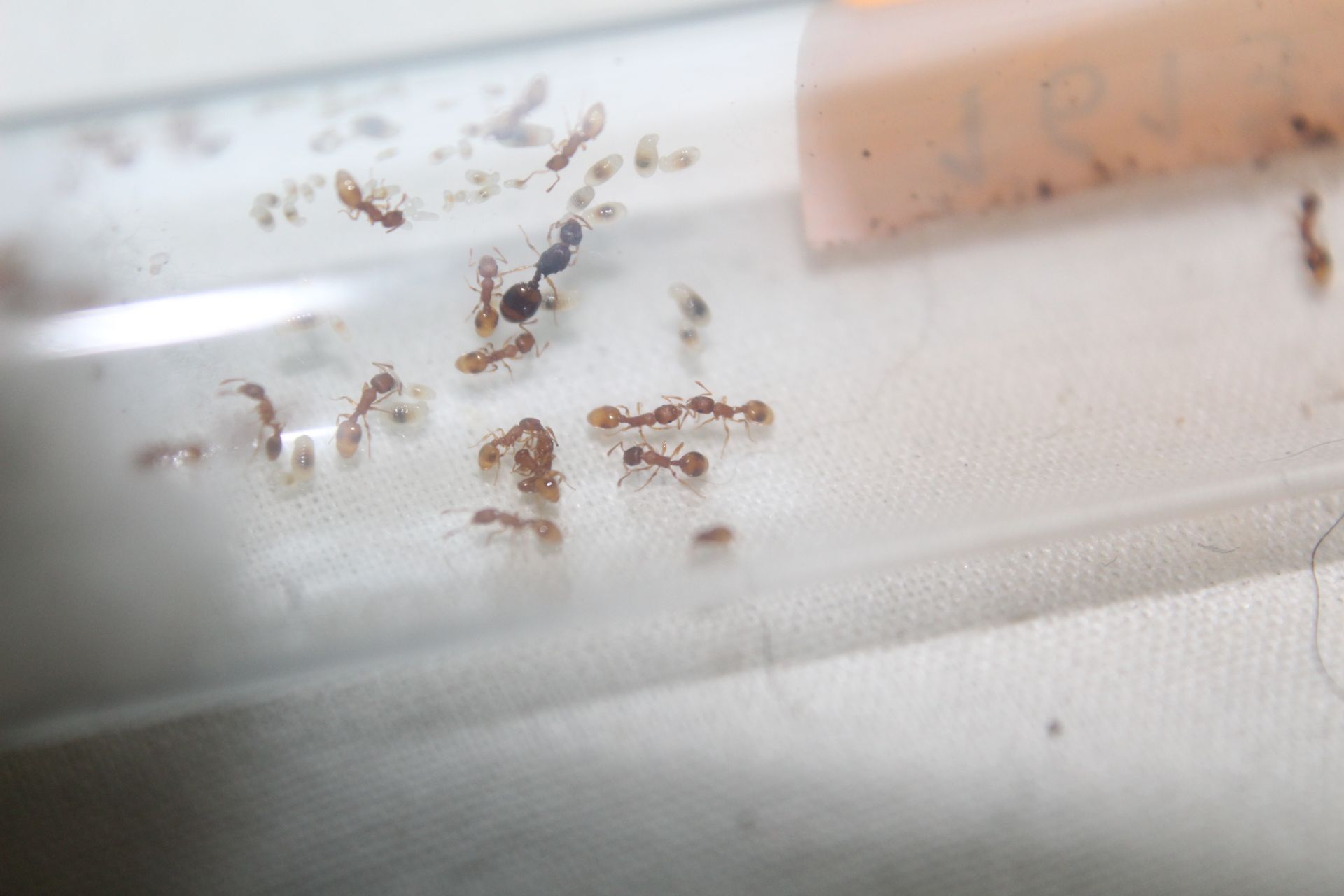 It's really cool that you got a colony of these guys when they aren't even reported in your state. Must be nice living in an understudied state, practically every ant you see is a "new discovery"!

The colony has been growing. I have done some research and figured out a solo queen that I found wandering and introduced to to T. ambiguus workers is T. duloticus. This queen is very different from the queen in this journal, so this colony must be pilagens or an undescribed species (so it's pilagens).

The colony wasn't very hungry so they were all gathered around the brood. Here's some photos. Those are some wee ants! Cute. I was finding nests of Temnothorax today (I believe).

The pilagens colony has been doing well. Today, I was out cracking twigs when I noticed a twig that had some Temnothorax in it. I blew into the twig and out, into my tube, popped a Temnothorax americanus queen and three host ambiguus workers. I don't know why she had so few hosts, but I'll try hard to get her some workers of her own. With my dulotic Temnothorax collection expanding, I have also been collecting a few ambiguus colonies. One of them even has alates.

Interestingly, I have found all three of the dulotic Temnothorax in the same forest, all within a small area, and none of them are reported in this state.

Here are some photos One of the ambiguus colonies I can get hosts from

Are these temporary parasites or true slave raiders?

Are these temporary parasites or true slave raiders?

These are all true slave raiders, although some of them have different styles of raiding. pilagens will try to recruit the workers of host colonies, and the raids of this species have typically a low amount of violence. I believe T. americanus is different and prefers the typical raid seen in some species of Formica. In most cases, the workers of the victim colony aren't able to defend their nest and flee with what they can.

So you’ll need to keep supplying them with slaves to keep them alive?

So you’ll need to keep supplying them with slaves to keep them alive?

Yes. I have multiple host colonies of T. ambiguus.

Would it be possible for you to take pictures of where you find these colonies (type of forest, type of twigs), because I have a large forest right next to my house, and haven’t had any luck whatsoever in finding Temnothorax there, and I want to search there (as it is some place new, and I’m hoping to find some other species than T. curvispinosus which I find in hickory nuts near my road). Thanks

Can you post some pics of the duloticus queen?