52 replies to this topic

Black light traps can be a very handy tool in catching queens. I started using one last season, and caught quite a few queens that way. I was just hanging a white sheet on the cab of my truck with a black light laying in the bed shining up on it, but setting this up over and over at every different place I went to was starting to get very old. I decided I needed a nicely built trap that I could quickly and easily set up with little work. Bioquip.com has some nice ones, but their products are rather expensive. Like I do with most things, I decided to just build my own. I figured if I'm making my own, I might as well design one way better than the ones I can buy for the same price. After I finish this, I plan to come up with a very low-priced design next, since I need one or two like that also.

This is a picture of one of the Bioquip traps that I'll be basing my idea on.

I just bought a bug zapper to start with, because these are obviously already designed to attract and kill the very bugs I want to collect. It already contains the ballasts, UV light bulbs, and the sockets that the bulbs plug into. I went with the Flowtron BK-80D, because it contains two 40 watt bulbs and two 40 watt ballasts. You can find this on Amazon for about 60 dollars. (http://www.amazon.co...flowtron bk-80d). This will give me 80 watts of light, compared to the 12 to 22 watts of lighting you would get from one of Bioquips traps; that means way more light, which means way more insect attraction. I would like this to be portable also, so I decided to tear apart a small desktop UPS and incorporate that into my trap too.

I just started this project, and will post everything on this thread as I go.

This is the Flowtron BK-80D before taking it apart. 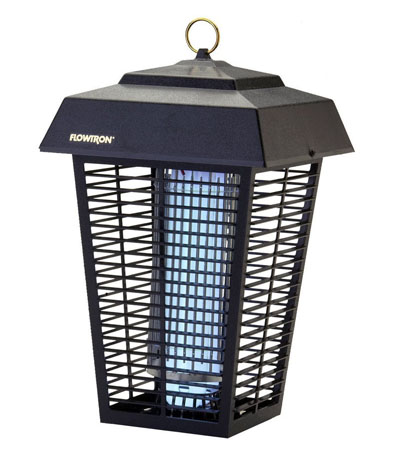 Here it is all disassembled. You can also see the two black buckets I purchased from Home Depot, and the funnel designed to fit inside them perfectly that I got from Bioquip. Even though the price was kind of high (27 dollars), I bought the funnel from them anyway, because that's the one part that only they make, and that I would not be able to fabricate myself. The acrylic baffling is all cut out and fit together now. I cut the bottom off one of the buckets so it can be used for he top half of the trap. Baffling all reenforced, welded together, and painted. Huh very cool design. I will be watching this.

I guess the baffling wasn't completely finished yet, because it needed the mounts to attach it to the upper assembly. I spent like three hours making them, and then realized they just weren't going to work, so I then had to try to revert everything back to how it was in the beginning, which of course did not leave it in the best of condition. After about four hours of wasted time, and some added imperfections, I then almost had exactly what I had when I started today.

My next mounting idea turned out much better. I duct-taped the underside of the upper assembly to seal up all the holes. Now I just have to get the baffling mounted onto the upper assembly.

Okay, so this nice acrylic baffling piece I spent so much time on is now in the trash can. I completely destroyed it in an unfortunate chain of events. Some of its design was actually just a bunch of fixes to mistakes I made along the way. I'm going to remake it the way I would have liked to from the start--much better obviously. First of all, I'm going to use thicker acrylic to eliminate the need for the tubing down the edge of each fin, as well as the square piece that each fin had to be fit into. This new one should be a lot smoother and simpler. Secondly, I'm going to use white acrylic so it won't need to be painted, which is pretty much what caused its death in the first place.

I'm saving all the detailed reading for tonight, but in the meantime, this looks promising:

I noticed a design online where they punched a hole in a rubbermaid. That might be a good idea, but I have spare buckets so I want to use those up. Some ideas I have for the funnel instead of buying one include dog surgery collar, large mixing bowl or cut up a length of duct.

My plan right now is to try constructing a LED trap, which should help with portability.

That's a hugeeeee trap. And I bet you're gonna catch some weird things with it, not just ant queens.

More the merrier! It appears the CDC design trap has a fan above the light to convince the insects to enter the funnel. That should be pretty easy to implement with a small battery powered fan.

I'm saving all the detailed reading for tonight, but in the meantime, this looks promising:

I noticed a design online where they punched a hole in a rubbermaid. That might be a good idea, but I have spare buckets so I want to use those up. Some ideas I have for the funnel instead of buying one include dog surgery collar, large mixing bowl or cut up a length of duct.

My plan right now is to try constructing a LED trap, which should help with portability.

I'll have to check that article out. Funny, I had that same idea about the dog surgery collar. I just like this funnel because it fits perfectly and has a nice lip that lets it sit on the rim of the bucket.

I've got a UV LED strip on the way which should be much easier to configure. I'm thinking about how I want to set the bucket up though. I'm debating whether to use a funnel or not. Without one would allow you to inspect what arrives and get the moths and hamsters out. But with a funnel, you can set it and forget it, though you'll have to sift through inches of random creatures later on. Any suggestions?

Yeah, up until now I've been using just a white sheet, where I can sit in the bed of my truck picking anything I want off of it. I figure with one of these bucket/funnel traps, I can maybe just sort through all the goodies later and see what I came up on... so long as they don't all kill each other. I'll likely design something specifically for the bed of my truck, and use the portable bucket trap to carry out to another location near by and leave for a while. I see it as more as an unattended trap, like something you might leave out over night and check in the morning.

Any sources for the acrylic other than HD? Any tips on cutting it without a router or bandsaw? And where did you get that middle connector? I have an idea for building a cheap UV trap, which I'll share if it works out.

I get my plastic from http://paragonplastics.us/. They're located in Santa Ana, CA. As for cutting it, if you're cutting a straight line, all you need to do is score it and snap it in half, but if you have curves, then you will need some kind of power tool or a laser cutter. You can cut plastic with a router and a plastic cutting bit. I have some bits, but no router because they're just way too loud to use in an apartment. What middle piece are you talking about?

That's the top part of this bug zapper. I got it so that I would already have the socket for the bulbs.

Edit: Actuallly, I made a couple posts that day. Are you talking about this center piece?

That's the top part of this bug zapper. I got it so that I would already have the socket for the bulbs.

Edit: Actuallly, I made a couple posts that day. Are you talking about this center piece?

Yeah that's what I was referring to.

I ordered a "12 inch homebrew funnel" and it's a perfect fit. Next I'm going to try and make the acrylic. Is Fluon effective on plastic? I'm thinking coating the funnel and acrylic with Fluon or silicone may help encourage ants and whatever else to go into the bucket. 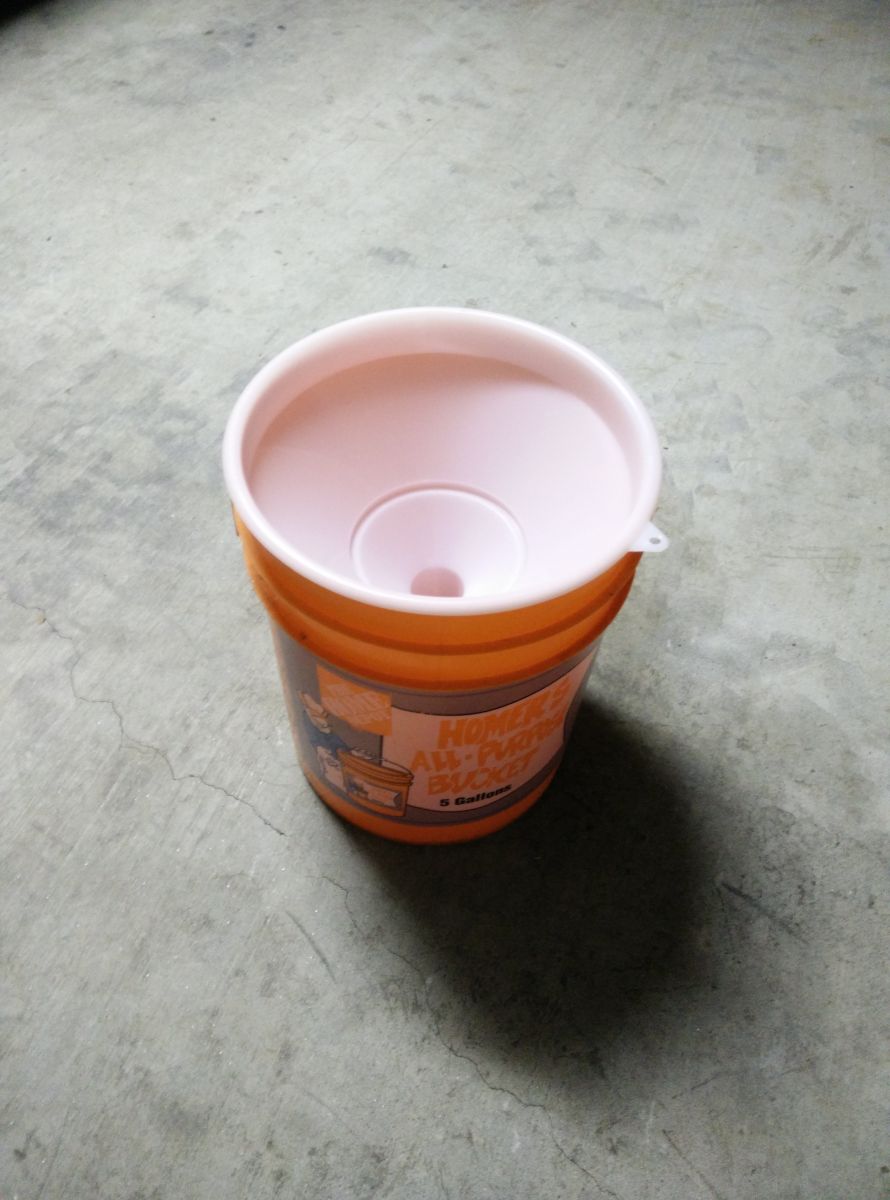 That's awesome. That funnel should work just fine. Fluon will work great on that thing. Too bad they had to put that one little ridge in it. How much did you pay for that?

That's awesome. That funnel should work just fine. Fluon will work great on that thing. Too bad they had to put that one little ridge in it. How much did you pay for that?

Ditto. The ridge is for a strainer. I don't think it will be an issue, but if it is, I was thinking it can be easily filled with something like caulk or epoxy. It's $10 but came out to almost $20 after shipping. Got it from morebeer.com, though there's plenty similar ones on ebay and other homebrew sites.

Regarding the acrylic, I'm hoping the width of a rotary saw will be enough for them to fit together, I'll just have to make sure I cut it straight

. Cutting notches at the bottom would probably be best for it to sit on top of the bucket/funnel, but I'll probably have to find a bandsaw or dremel. Any suggestions on acrylic thickness to use?

Also tagged with one or more of these keywords: black light, dspdrew, trap