173 replies to this topic

Hopefully all those white dots on the wood are sand grains and not grain mites.

Haha, not mites. I check for those constantly.

I had something very strange happen with one of my formicariums. I don't know what the deal was with whatever was in this liquid feeder, but it appears to have caused some sort of reaction with the resin. I honestly have no idea what happened. 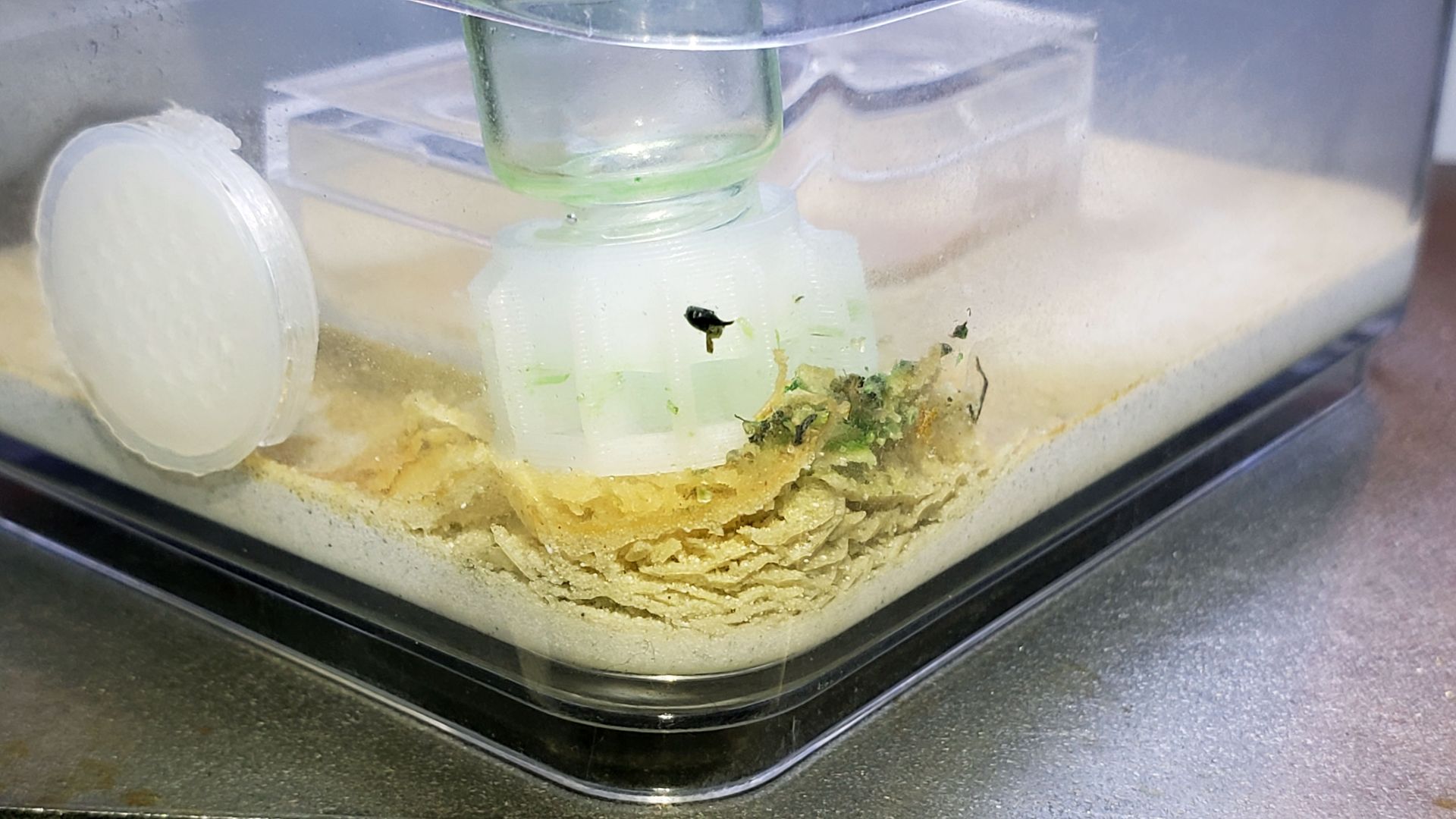 This is what it looked like about a month later. I had something very strange happen with one of my formicariums. I don't know what the deal was with whatever was in this liquid feeder, but it appears to have caused some sort of reaction with the resin. I honestly have no idea what happened.

This is what it looked like about a month later.

Woah..That’s quite a lot of damage. Do you think it will endanger the ants safety?

It didn't seem to. I have since scraped all the loose part out.

Looks like the fungus in the old Super Mario Bros movie. 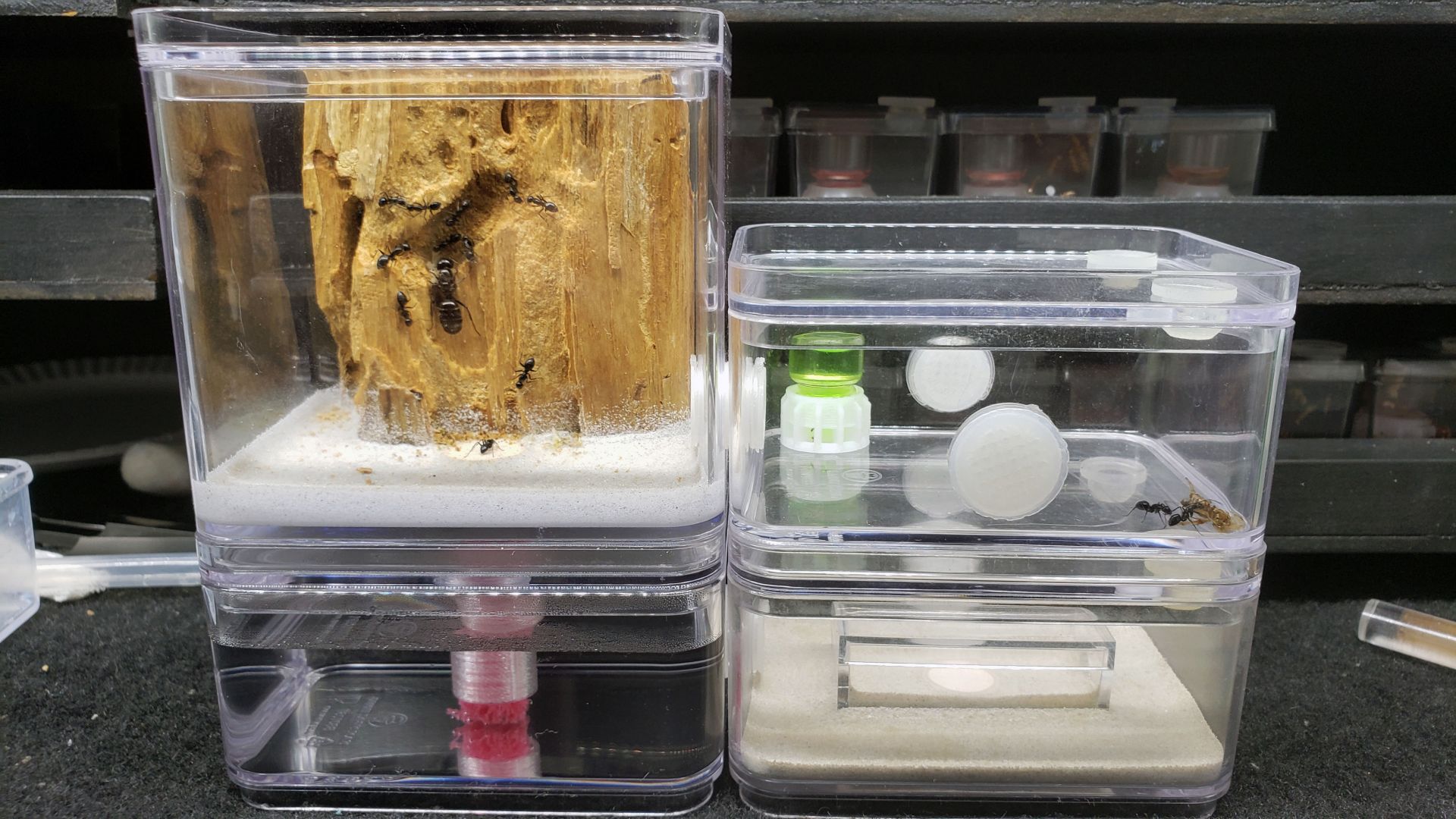 So how is this working out so far? Looks sharp! I wonder how the wood handles moisture over time.

My Youtube channel: Ants Navajo               Keeping- Camponotus pennsylvanicus, Tapinoma sessile x 2, Pheidole sp x 2
"We may be witnesses to a Biblical prophecy come true - 'And there shall be destruction and darkness come upon creation and the beasts shall reign over the earth.'" - Dr. Harold Medford

It's ok, but I never do well with this species.

Hey how did that wooden nest chamber go that you posted about in July?

What bits do you use to drill such perfect holes? and is that a custom printed plug for those holes?

So far this is pretty similar to the typical petri dish setup, only I am trying to find a way to keep it hydrated for a long period of time, as I will always do with all my formicariums.

The bottom container will hold water that will be wicked up into the inner chamber in the top container only, leaving the out world dry. I decided I'm going to put a thin layer of Hydrostone in the bottoms of all my out worlds to allow absorption of any excess liquids, and better grip for the ants. This layer of Hydrostone does not connect in any way with layers of Hydrostone on the bottom of the inner chamber and on the underside of the top container, or the ports between them, therefor it should stay dry. The inner chamber will also have a removable lid to allow for microscope observing, and easy cleaning. this is what i call confusingly smart

Hey how did that wooden nest chamber go that you posted about in July?

It was alright, but the colony eventually died off. C. laevissimus always seem to die off on me eventually.

What bits do you use to drill such perfect holes? and is that a custom printed plug for those holes?

Stepper bits, and yes I 3D print the plastic plugs.

So in the past I have had trouble with grain mites spreading through every colony in whatever cabinet I had them in. Fortunately, they're harmless and really just a nuisance, but I have heard of some people having parasitic mites spread through all of their colonies, which would be a real disaster. The main problem is by the time you notice the mites, they have probably already spread to every other colony around them.

I decided to find the best way to make sure that if there ever was an outbreak, it would remain confined to that one colony and no others.

So here is what I came up with, designed specifically for my laboratory-style formicariums. It should keep the formicarium and water tank completely isolated from the cabinet they are in. This is the formicarium and water tank on top of it. You can either put soap water or oil in them, both of which should stop the mites. The lid should keep the evaporation to a minimum if you are using soap water. It also keeps it from spilling when moving it around. It's actually almost impossible to get anything to splash out of a hole in the lid like that, short of violently shaking it.

I have oil in this one here. I'm sure there is always a chance the mite could fall off and end up loose in the cabinet, but it would certainly never make it into another colony, and probably wouldn't live long.

I guess if I wanted to, I could design them with a little more space between them and the formicarium to also keep your colony from being attacked by other small pest ants like Argentine ants.

Also tagged with one or more of these keywords: formicarium, container, out world, enclosure, how-to, diy, design, nest, dspdrew, tutorial