8 replies to this topic

I still believe test tubes are the best founding/queen rearing formicarium setup ever made. While the best idea out there, they still do have a few problems of their own. For instance, possible flooding, cotton strands tangling up ants and their brood, and the problem with having to move everything whenever the water dries up or gets dirty. Here's a little design I am working on so far to eliminate some of these issues. I'm still thinking of ways to improve on it. Terry Miller is also coming up with his version of this idea, so if it works out, between me and him, we may come up with the perfect alternative to the test tube that eliminates the few problems they sometimes have.

So far I have built what amounts to nothing more than a test tube cut in half, held together with silicone tubing that has a Hydrostone wafer in the center of it. Unless water somehow leaks between the Hydrostone wafer and the silicone tubing, which would be virtually impossible, considering how tight of a fit it is, the only possible flooding would occur outside the ants' portion of the setup, and would only flood the counter that it's sitting on. The only cotton so far is the cotton plug, which can easily be replaced with something better. The main problem with cotton, from what I have seen, comes from the cotton ball used as the damn. Since these two halves can be easily separated, it should be pretty simple to refill the water end if it should get dirty or run dry.

I'll be adding to this as I improve on this design. 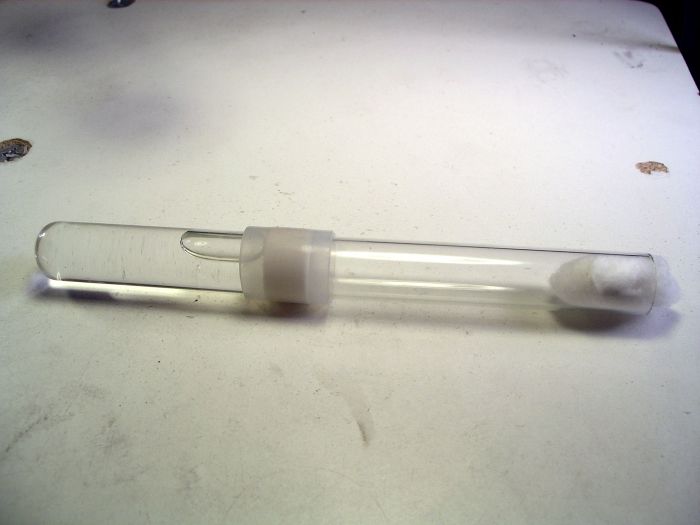 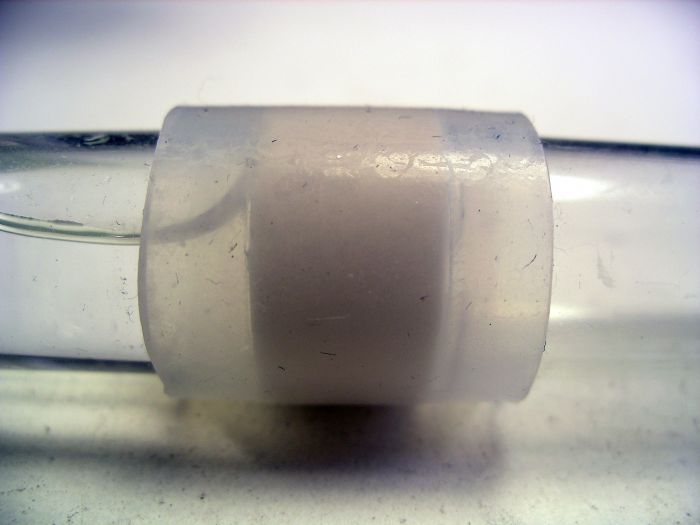 As we discussed, my biggest beef with a solid plug style is that hydrostone, like all gypsums and cements, is water resistant.  Hydrostone is even marketed by the manufacturer as having "High water absorption resistance."

I realize people will have their own opinions as to what constitutes high and moderate water absorption water resistance, but I remain skeptical of any design where water must permeate through by capillary action alone, as mineral content in water may stop the flow all too easily over time.

Keep us posted on any advancements, and I'll also let you know when I have a prototype.

Yeah, I'm aware of what the manufacturer states about Hydrostone, but I have no idea why on Earth they say that, because it absorbs water VERY well. It makes no sense to me, but it's perfect. I also only use water that has no minerals. Even mineral buildup would probably absorb water too though anyways.

The resistance probably comes in when casting larger sections.  That's my guess.

It has high water resistant when use in thicker layers, which is why its use for alot of water fountains, bird bath etc....

What blade was used to cut the test tube in half, and how did you shape the hydrostone wafer?

Might just be some rigid acrylic tubing from the local hardware store. I imagine and clear rigid tubing would do the trick.

But I agree, yes please on the instructions to make these.

I would definitely give full instructions, I just wasn't really worried about it until I came up with the best, most simple design. I was actually hoping there wouldn't be a need for any cutting, I only did it at the moment to test the idea out. I used a micro table saw with a diamond blade, but there are actually glass tube cutters which I have ordered. I'll let everyone know how well they work for cutting test tubes, since I have found that that is most likely what this will require now. As for the Hydrostone wafer, I'm still trying to find the easiest way of making them. For now what I did was just filled the right sized test tube with Hydrostone, and waited for the glass to crack. After removing the Hydrostone rod, I cut it into wafers with my table saw.

dspdrew did you ever find an easy way to make the Hydrostone wafers? Not looking forward to the idea of breaking a bunch of test tubes in the process

Also tagged with one or more of these keywords: dspdrew, test tube, nest, formicarium, chamber