I heard you guys wanted more leafcutter journals? Well, I suppose I don't really have a choice, do I...

I'll start this off by saying I've actually technically been the owner of this Atta colony for quite a while, but due to certain complications involving the absurd AZ summer temps, the pandemic, etc., they were stuck in the possession of a friend of mine for the last 2ish months (along with a few other colonies). 10 days ago I was finally able to have them shipped to me, as the temperatures dropped enough where they wouldn't cook in the box. Unfortunately, even with overnight shipping, the fungus was severely damaged. Around 70% of the fungus was dead on arrival and quickly discarded by the colony. From there, due to the stress of shipping, they wouldn't accept any food I offered for the first day or so, and were quickly eating what little fungus they still had.

While it was looking very bad for the colony, I know of one little trick that can be used with most attines. In the wild, leafcutter ants will drink the sap from the leaves that they cut and get the sugars from it, giving them energy and allowing them to consume less of the colony's fungus. Since my colony wasn't cutting anything, they were stuck with just eating their fungus rather than getting any sugars. Typically if just pure liquid sugars are offered they will be ignored, but with some strategic placement and small droplets I was able to get the colony to realize that the mysterious liquid was in fact delicious, and they quickly started eating what I had offered. This almost completely stopped all consumption of the fungus, and gave the ants a great boost of energy. From there, the path to recovery was mere steps away. 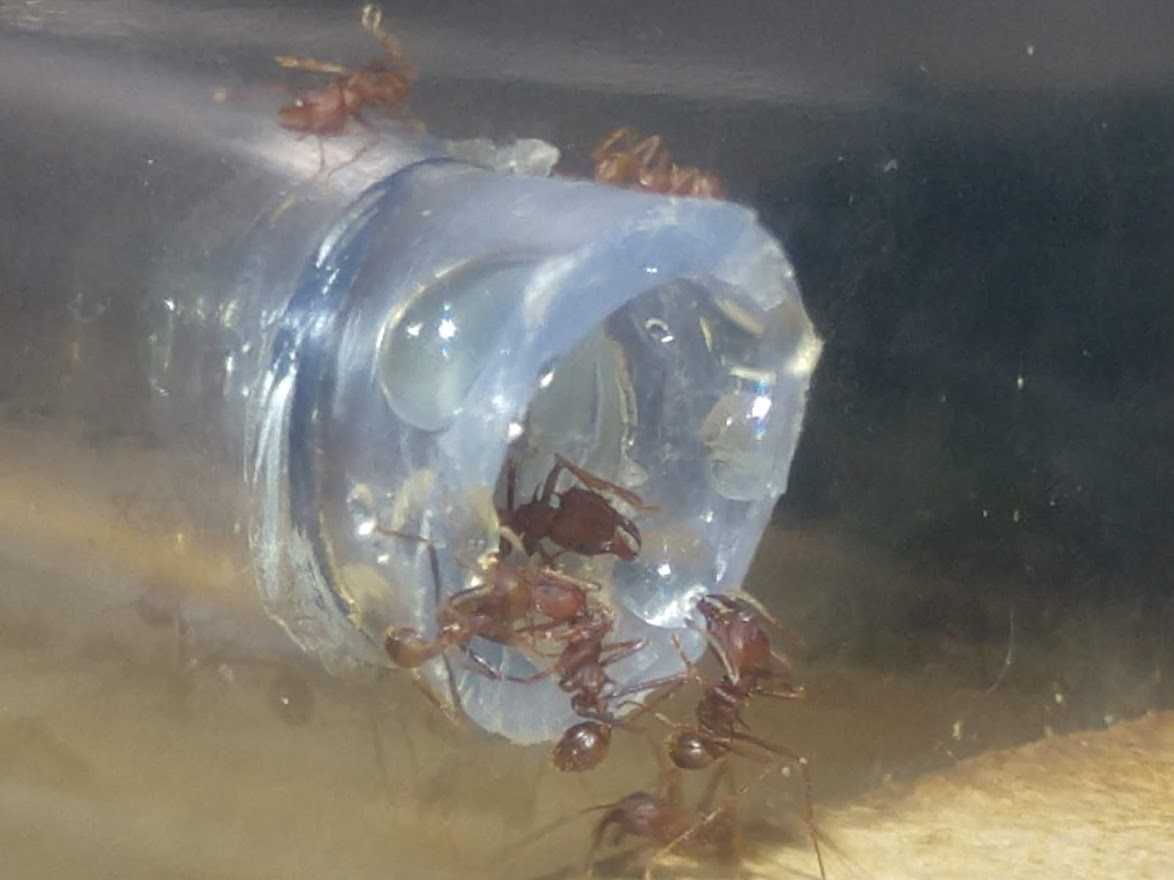 Even though things were looking good, or at least better than before, I still was not in the clear. Since being shipped the colony had lost around 95% of their original fungus mass, as of 10/20. At it's smallest, the brood pile alone took up more space than the fungus garden did. Not good. To my dismay, the Atta weren't interested in any of the food that my Acromyrmex were taking regularly, so I knew I had to find some alternative sources. The previous caretaker of this colony had told me that he had some luck with clovers, and thankfully just up the road there's a large park that serves as a floodwater reserve; and it's full of miscellaneous grasses, including clovers! After harvesting a bunch, I offered it to the Atta and hoped for the best.

One feeding later, and the fungus had nearly doubled in height! The Atta LOVED the clovers! The fungus finally had some real structure again, and while it was still really small, the fact that it was now growing instead of shrinking was a huge development. Until now it had done nothing but gone down in size, so now seeing it re-grow was such a relief.

Each day these guys would take in more and more food. It's really interesting watching them process it, and how they mince it into smaller pieces to be distributed around the fungus garden. Seeing fresh plant material on the fungus is really satisfying, too! 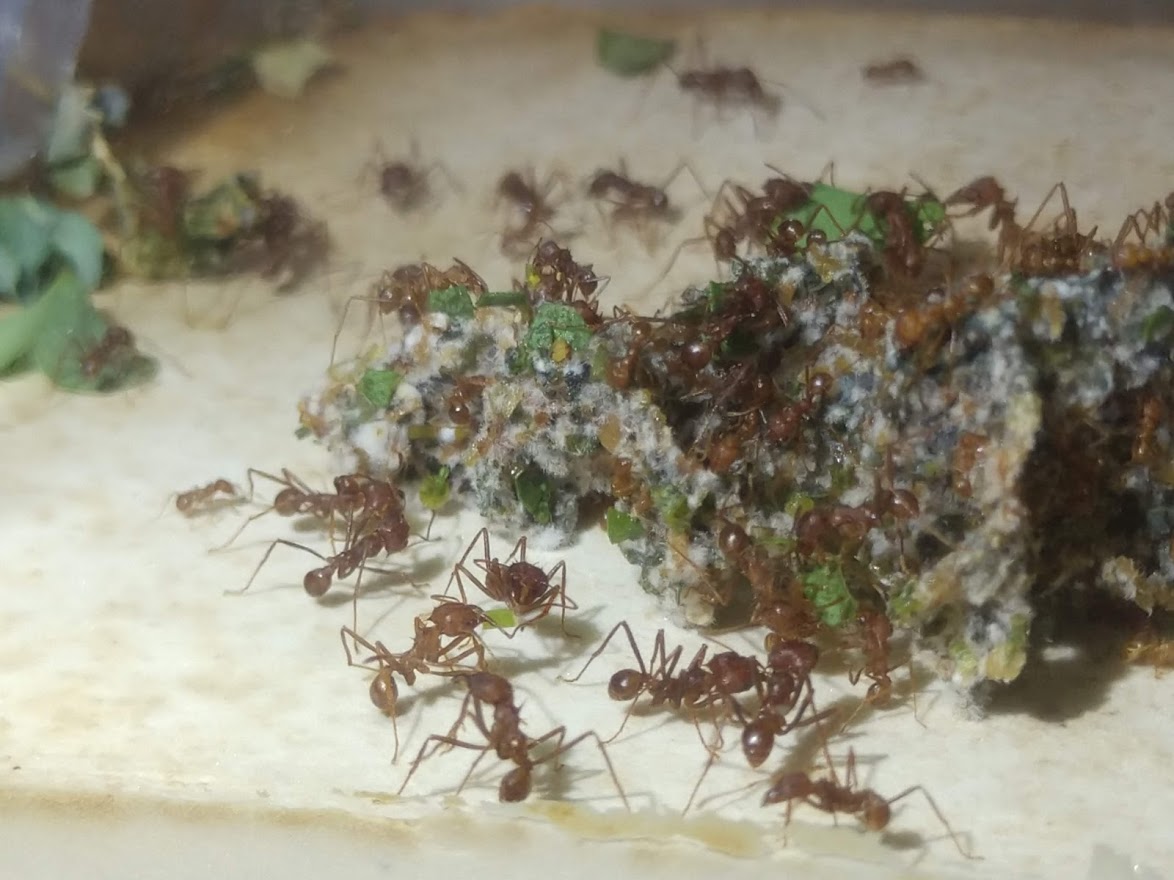 The fungus grows insanely quick, too. The fungus was at it's smallest on 10/20. Just four days later, it is easily 3 or 4 times the size, and the colony is acting far more normal now. We're also at the point now where the brood is once again seated within the fungus garden itself, rather than sloppily in a pile on the ground. Soon enough the brood pockets will be largely closed off and hidden away from where I can see, along with eventually the queen herself. While I still have the opportunity to see her, I'm going to take advantage of it, because it's only a matter of time before she disappears into the fungus. I do think it'll be a while still, given that she clocks in at a staggering 25mm, making her the largest ant found in the US. Either way, making this journal is a huge relief for me, as I was worried I would have never gotten the chance to do so. When seeing their fungus shrink rapidly over the course of the first 6 days I was sure the colony was toast. Well, to my relief, they are in fact ants and not toast, and I can finally make this journal for you all. To wrap things up, here's a quick video! I'm sure it'll be awesome to look back here in a few months' time to see how far the colony has progressed.

Best get your lottery ticket; you're one lucky dude.

Clover is a high protein legume. It must be a super food for the fungus! Through seeding, I'm slowly converting my lawn from grass to mostly clover to help wildlife. Muahahahaha!

Since yesterday the fungus has grown significantly taller, and the colony is taking in tons of food at basically all times. They're also taking a wider variety, but clovers are still their favorite. The brood seated in the fungus looks really satisfying too! It definitely looks right at home in there, opposed to in a big pile on the floor. For now they seem to be growing the fungus mostly upwards, for whatever reason. The footprint itself still isn't huge, so I assume eventually they'll start to grow it outwards as well. The queen has also moved to the other side of the garden for the first time since getting them. They seem to be growing that region the most, although I really don't know why. Seeing the structure develop is really cool, since originally they basically just had a big lump of fungus without any real shape at all. These are so cool looking and the queens are so fat! Best of luck with these. But I don’t think you need it.

I feel like saying "the fungus got even bigger, again" every update is gonna get repetitive, but that's just how it is with these guys. Typically I collect food for them on my way home from work every night, but I forgot yesterday, so they went a few extra hours without anything to eat. I went out early today instead to get some, and they went wild! Needless to say they still aren't bored of clovers at all! It's crazy to me to look back on the first pictures in this journal and think it's only been a week since then. I'm really glad I was able to save this colony, because I'm having so much fun watching them recover and flourish. I still love my Acromyrmex, but their growth rate doesn't even come close to these guys. Here's a quick update video of them that shows a bit of their foraging behavior:

You could grow clover sprouts indoors. I bet they’d love that.

I feel like CO has some of the most boring ants.... aside from P. occidentalis

Co-owner and founder of Mountain Myrmeculture and The Menagerie Discord Server.

Do atta always need to be fed this much? Or are you powerfeeding

You could grow clover sprouts indoors. I bet they’d love that.

Definitely! A lot of legumes are easily sprouted with minimal resources, I bet that'd be a really reliable food source for leafcutters.

Time to bust out the chia pets again.

Time to bust out the chia pets again.

hehe i remember those from walgreens.

Do atta always need to be fed this much? Or are you powerfeeding

This is great for people like me who want to keep Atta but will probably never get a chance to.

This is great for people like me who want to keep Atta but will probably never get a chance to.