Lasius fuliginosus is in my opinion one of the most beautiful Lasius species. They are native to Europe and parts of Siberia and Central Asia.

Fuliginosus colonies are often found near the base of broad-leaf trees. You'll see hundreds of workers climbing up and down the tree to farm aphids up in the treetops.

This is a parasitic species, meaning the queen requires workers and brood from another colony in order to start her own. In nature she attempts to intrude an umbratus colony and kill their original queen. I caught a fuliginosus queen in June 2019 and gave her niger brood & workers as hosts. Lately my colony has been failing and I had almost given up hope, until I had a nice surprise today (August 18 2020). I'm confident enough in the survivability of this colony that I'm going to keep a journal about them.

A few things about Fuliginosus that make them so interesting to me:

Fuliginosus workers & one of their cardboard structures:

I will post a timeline of how this colony progressed throughout the past year and then start posting regular updates:

[June 2019] On June 24 I returned home from a failed queen hunt. Then I found a large ant in my own garden! I thought it was a Formica fusca worker at first, but later someone told me that it was a Lasius fuliginosus queen! The next day I attempted to introduce host workers to the parasitic queen by using the fridge-method. I raided 50 pupae and 5 workers from a wild Lasius niger nest. I then put the queen and the 50 pupae together in a test tube. The 5 wild workers were placed in a different one. I then put both tubes in the fridge (the cold makes them less hostile). After half an hour I tapped the 5 workers into the tube with the queen and the brood and I placed the merged group into the fridge again. 30 minutes later I took them out and they seemed to have accepted each other! The workers were still a bit "scared" of the queen, every time they touched her with their antennae they'd bounce back, but the workers were otherwise calm and peaceful

[July 2019]
The first eggs appear. I spotted one egg sticking to the gaster of the queen. The queen is getting large! Her gaster is swollen and white. The niger hosts must be feeding her well.

[August 2019]
There's a large pile of eggs in the colony, but still no larvae or pupae... I had expected some older brood after a month. Maybe the hosts aren't taking care of the eggs properly?

[September 2019]
Another month later, there's finally large brood! There are several larvae and a single pupa.

[October 2019]
I spotted 4 pupae during September and October. When hibernation arrived all these pupae were gone, but there were no fuliginosus workers anywhere. Odd

[March 2020]
The colony has emerged from hibernation. They have about 30 niger host workers left (out of the original ~50) and a dozen larvae from last year. Still wonder what happened to those fuliginosus pupae.

[May 2020]
The colony is doing great! The queen is fat again and the colony has a massive brood pile! There's over 20 fuliginosus pupae in their test tube and a tonne of eggs

[June 2020]
Very bad news... The pupae are dying off in large numbers. Not a single fuliginosus worker has eclosed. The pupae in the test tube turning black, all with dead workers inside. I think I know what happened to those pupae from last year now... Something probably goes wrong with the communication between the niger hosts and the fuliginosus pupae. The niger workers just refused to open the pupae, causing the fuliginosus worker to slowly dehydrate and die inside. The workers have raised so much brood, only to let it die.

[July 2020]
The host niger numbers are dwindling. I gave them 20 pupae from another wild colony in my garden. Half of those turned out to be male drones, ugh (I manually removed them each time one would venture into their outworld). I didn't have high hopes for the colony at this point.

[August 2020]
Good, unexpected news! I thought this colony was doomed, but after checking up on them today (August 18) I discovered six or more fuliginosus workers in their test tube! The host workers are finally succesfully helping the new workers eclose.
I am very happy.

Some old images below.
The queen on the day that I found her & after introducing her:

On the left: a thriving brood pile and a fat queen [May 2020]. On the right, a month later: all that brood is dying. Many pupae are partially opened / shredded with limbs of the dead callows sticking out [June 2020]

The good news! [August 18 2020] Circled in red are the workers that I can confidently say are fuliginosus (sometimes they're difficult to distinguish). They are still very small compared to the size of workers from wild, mature colonies.
Most of the parasitic workers are staying inside the nest and actively take care of the brood, while the niger hosts mainly forage (I've only seen one fuliginosus worker actually in the outworld) 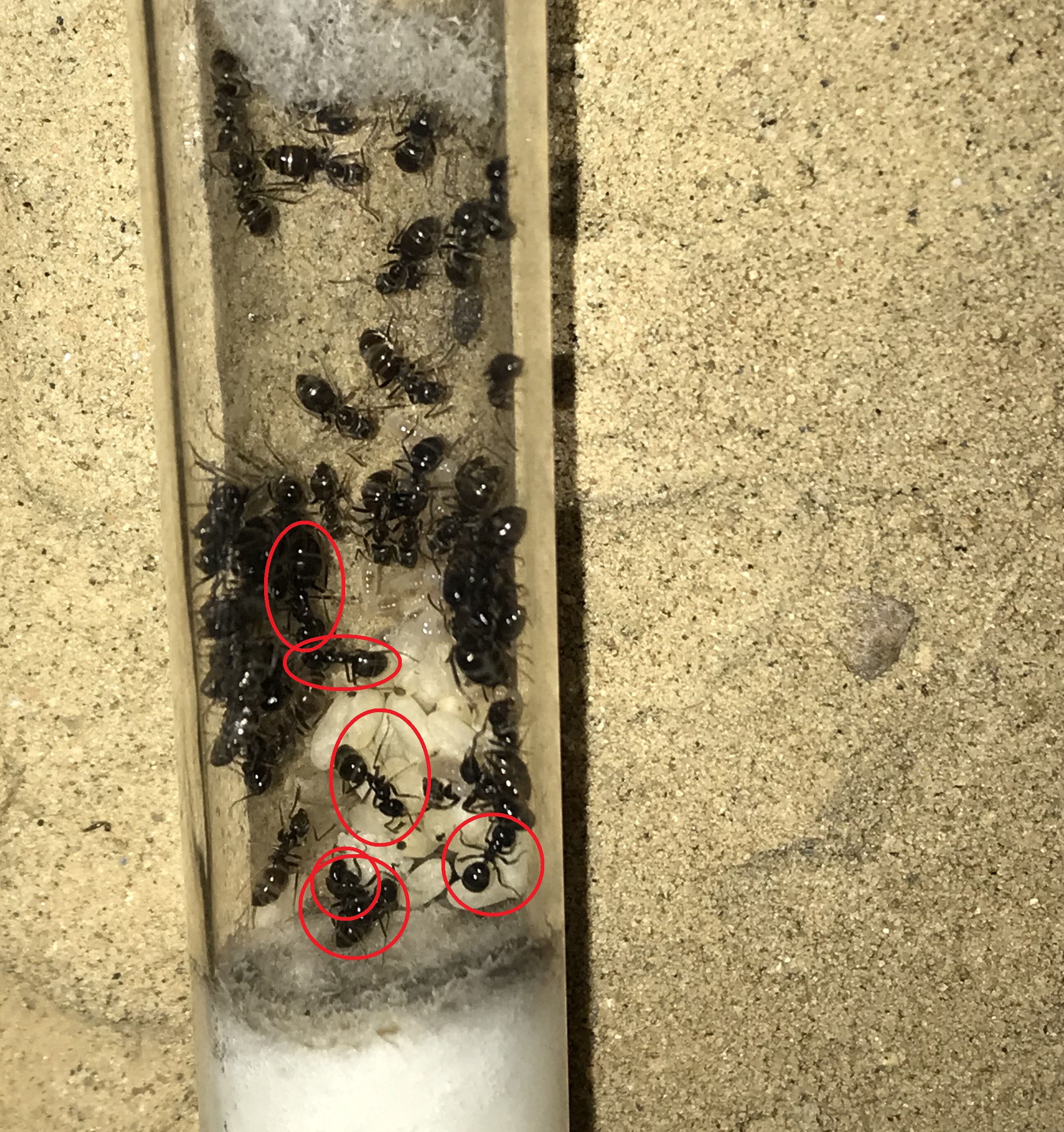 Awesome! I love this species.

I think I might have found a colony of these not far from me, not sure when they fly or where the nest is, but I am pretty sure I have seen those workers, because the ones I seen were huge, about 1cm but I have no idea where the nest is exactly so I am not sure if i will ever find em

Though there are some fuliginosus workers now, I'm still not sure if they're taking care of the brood properly. I saw a pile of cocoon shreds, dead cocoons & dead fuliginosus workers in the outworld. I don't know how recent these are, they could have been from weeks ago when niger workers were still slaughtering the brood.

Someone on discord pointed out that adding niger pupae can significantly increase the chances of the workers opening both species' pupae. Perhaps my second boost of a few weeks ago (which mostly contained male niger drones) was what triggered the opening of fuliginosus pupae. I might give that a try again (though I have no idea where to find niger pupae currently, it's cold outside)

Pile of dead fuliginosus in the outworld: 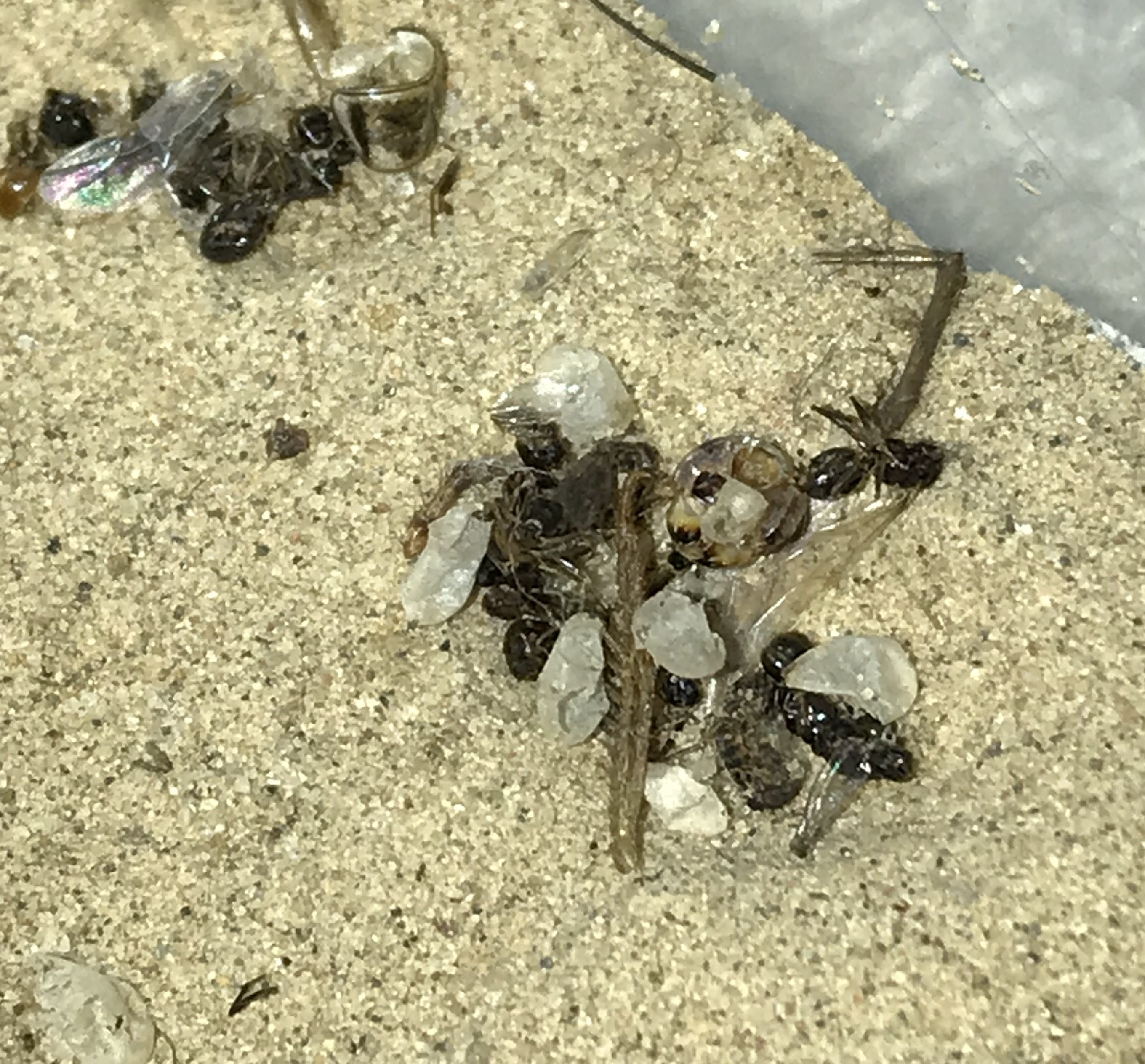 The colony (queen at the cotton in the centre): 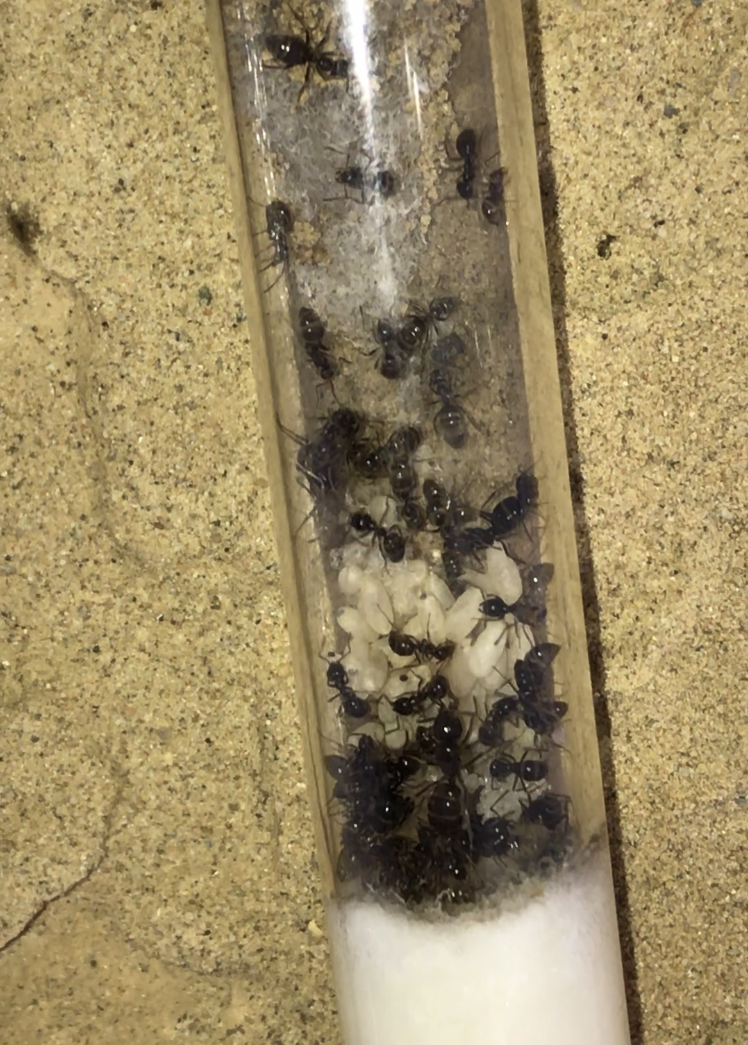 The colony is growing steadily. Every time that I check up on them more fuliginosus workers appear.

The fuliginosus workers have performed a coup d'etat! The parasitic workers have taken the upper hand over the past three weeks. I could only identify a few niger host workers left, the majority of this colony are now fuli workers.
The remaining nigers are sitting idly near the entrance of the test tube while the fuligosus workers are taking care of the brood. 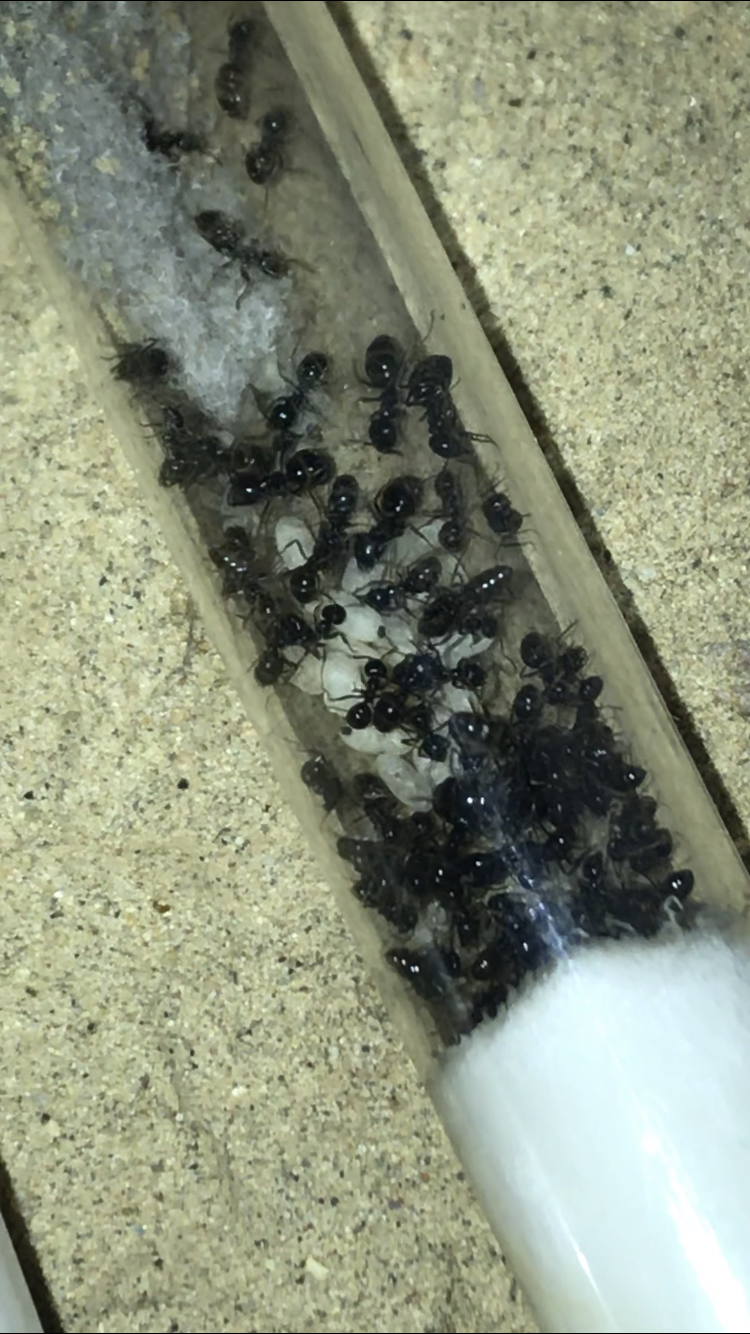 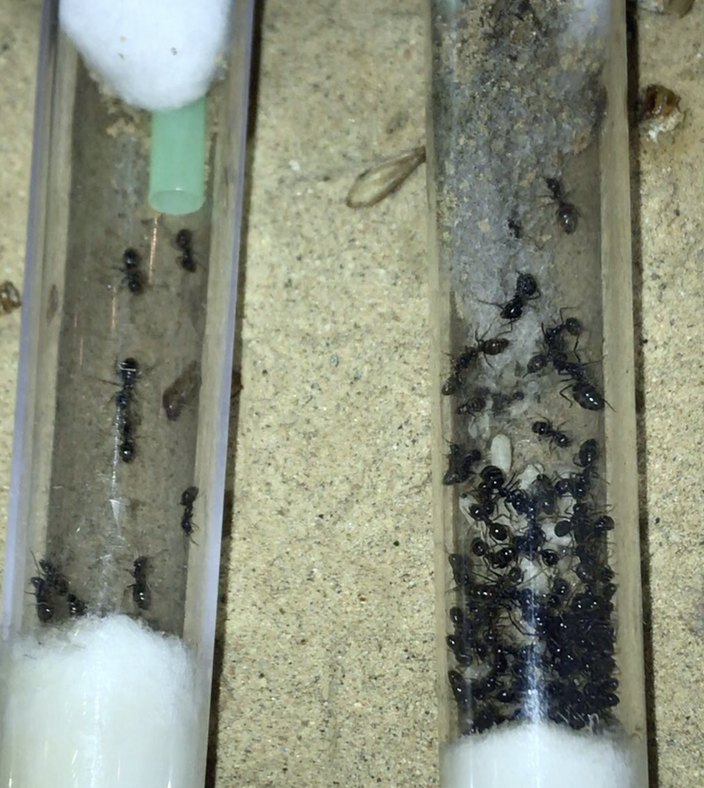 The fuliginosus colony has been in hibernation since late October. I made a small container for them to fit in the fridge.

There were 4 niger host workers left, who were constantly driven away by the fuliginosus workers. I removed the nigers and put them to rest.

Their old test tube dried out and I couldn't get them to move out. I eventually (gently) dumped the colony in the hibernation container. The queen at the bottom left: 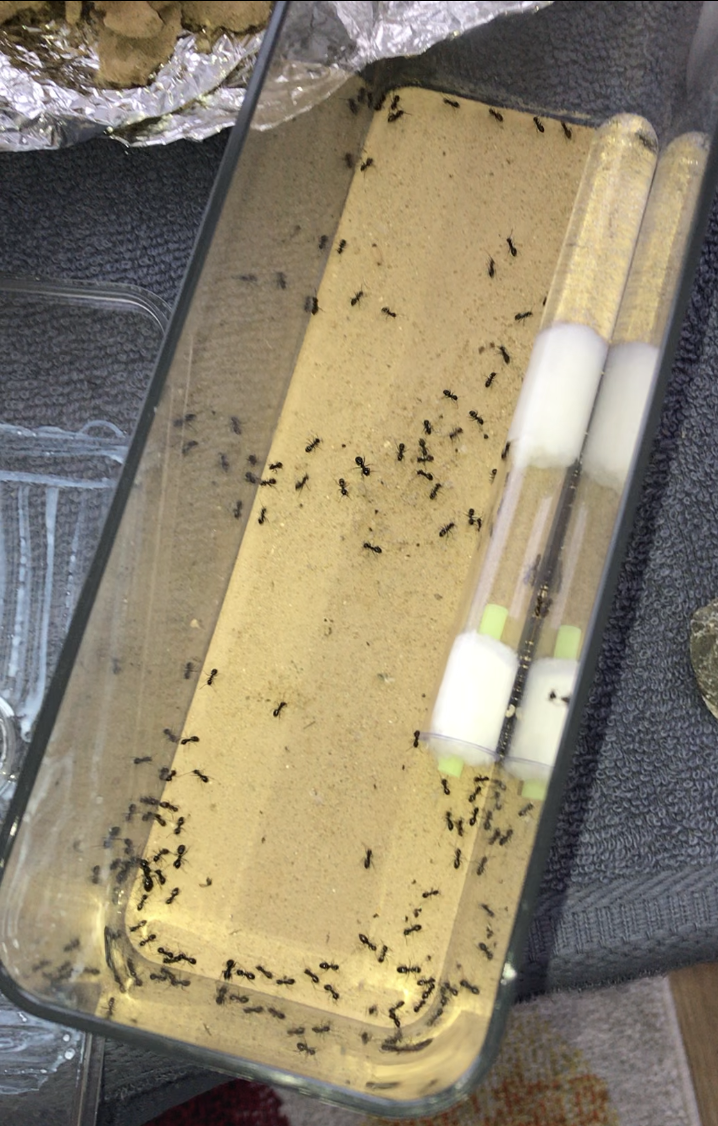 During hibernation. All the workers sitting together in a clump around the queen: 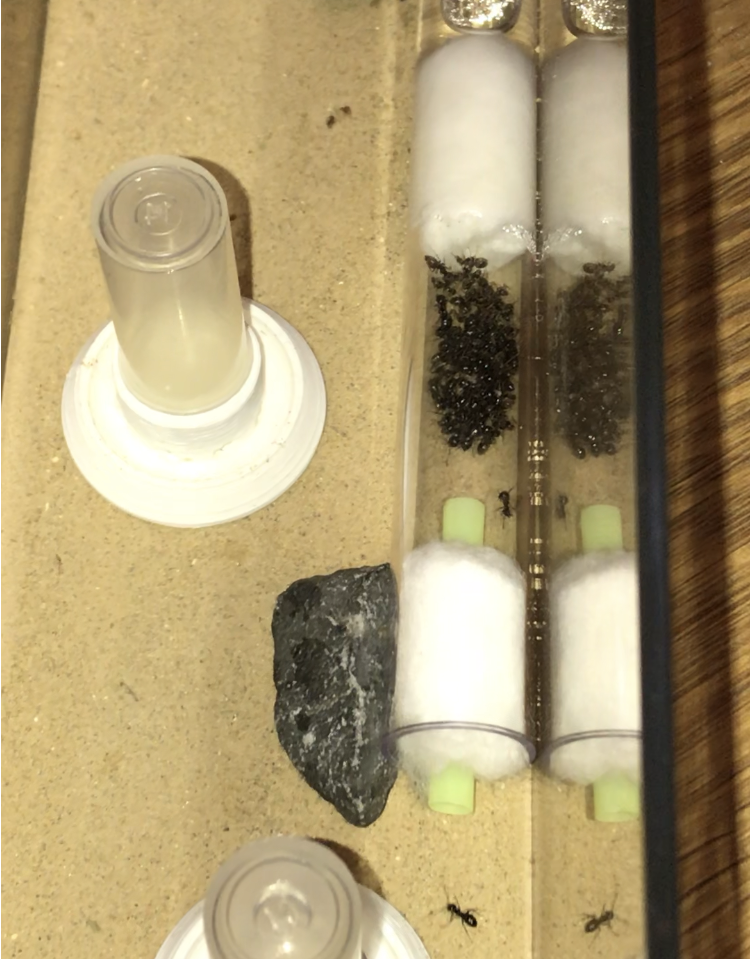 I took the colony out in late February

They hibernated with a small pile of larvae which have now developed into pupae. Expecting the colony to double in size soon

Sorry for the glare, their current set-up makes it difficult to take pictures: 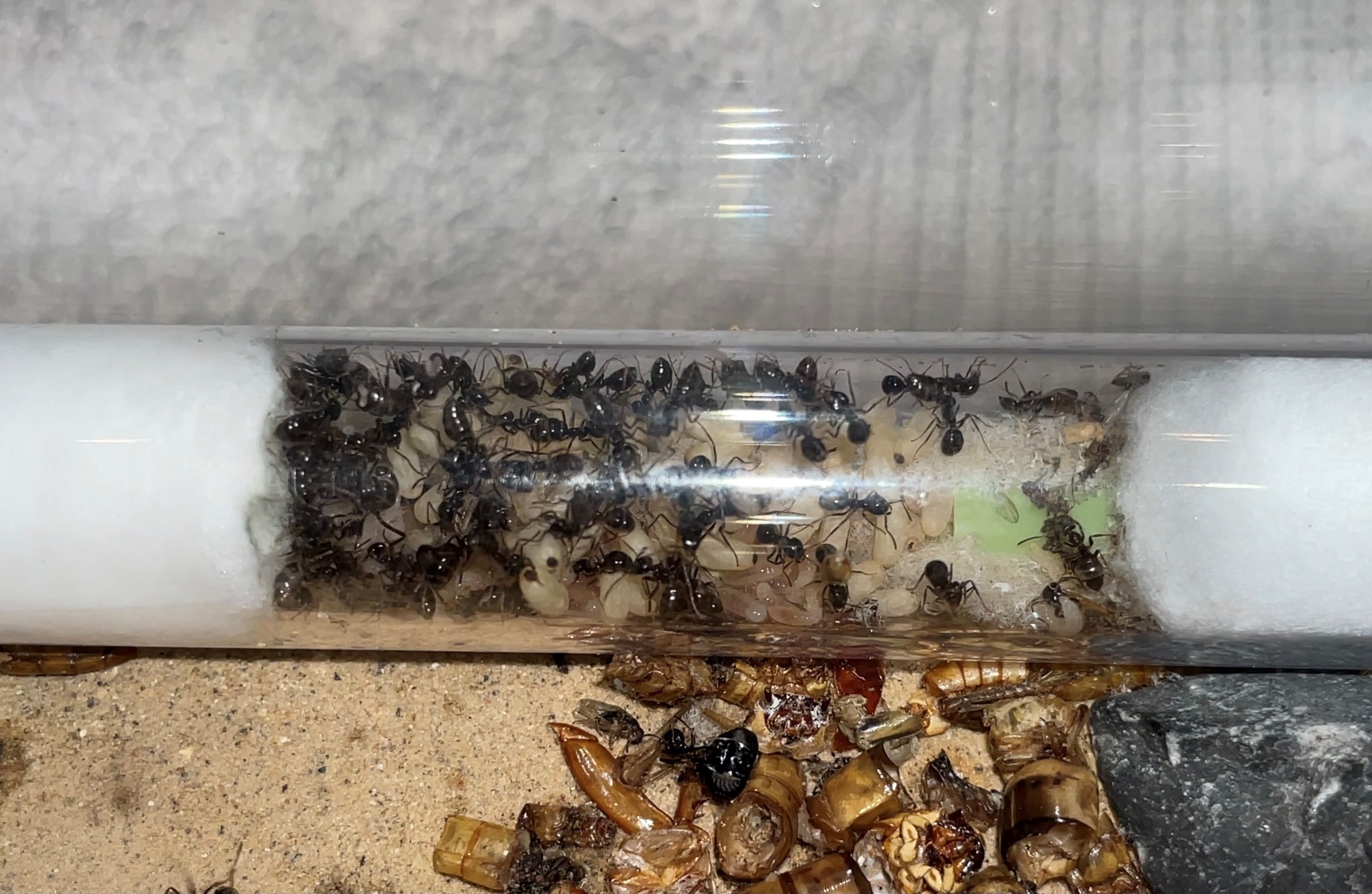 Also tagged with one or more of these keywords: lasius, fuliginosus, parasitic