The majority of the larvae have pupated now, there's a couple thousand workers on the way!

I hooked up the new nest and outworld that I made for them: 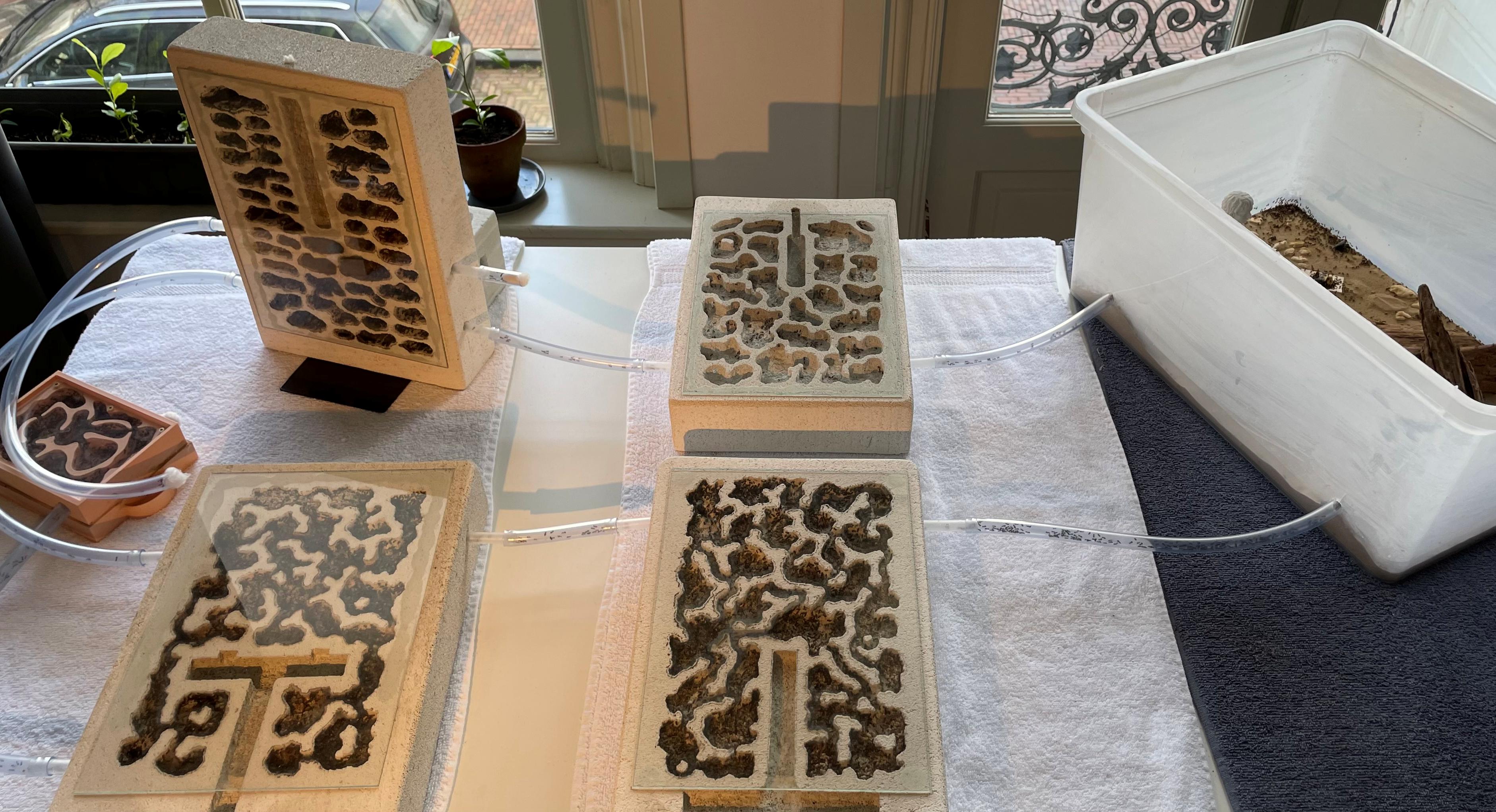 The outworld is just a big tub with hardened loamsand, wood and a bust of Emperor Augustus because why not: 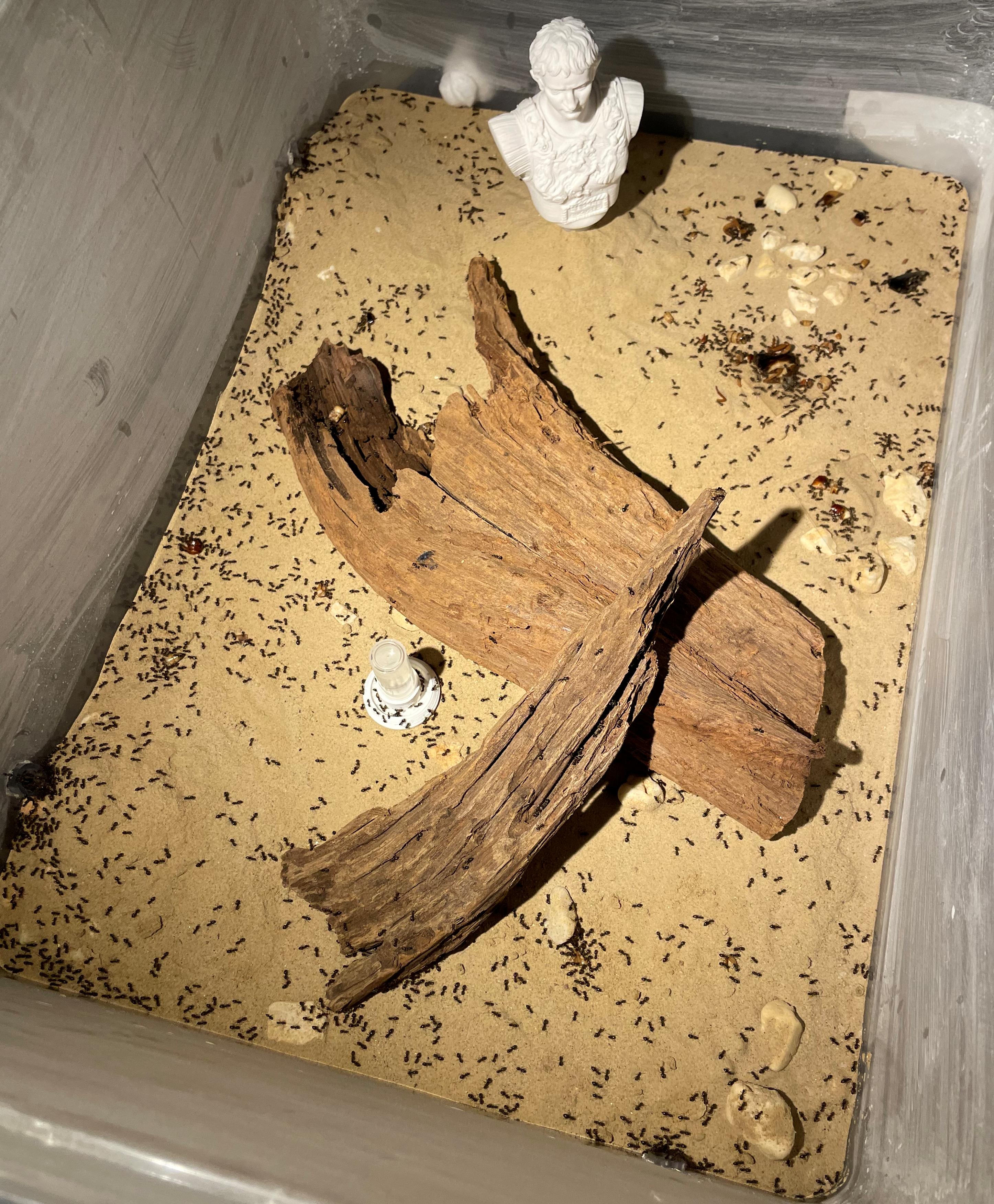 The colony's oldest Ytong nest, the one they were first hooked up to last year
There's some yellow-ish looking larvae in some parts of this nest. These failed to spin a cocoon and are going through pupation naked! There's a few of these every year: 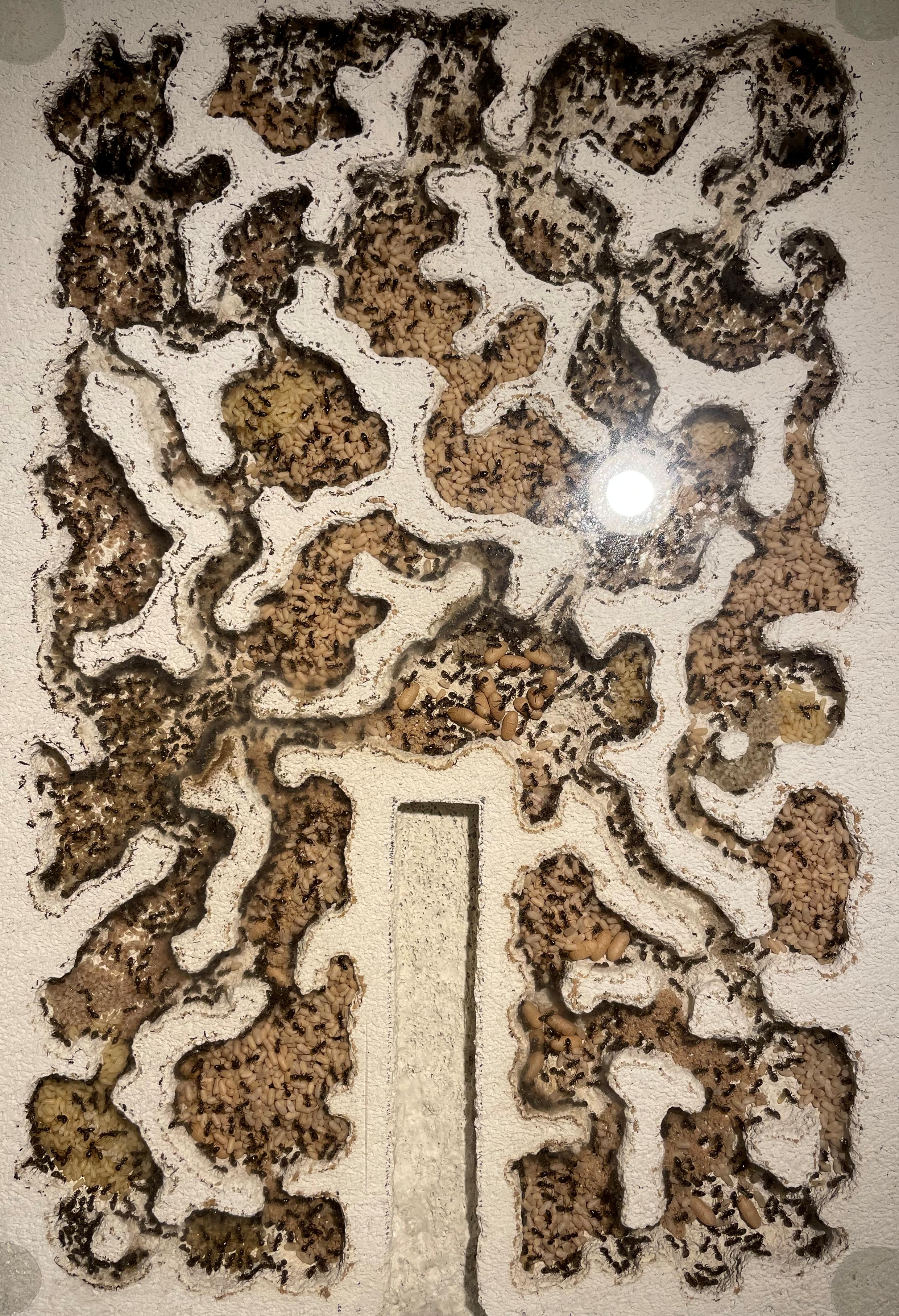 Their second Ytong nest. Most of the alate pupae are stored here. This is also the queen's royal residence, she has lived in the bottom left chamber of this nest for almost a year now: 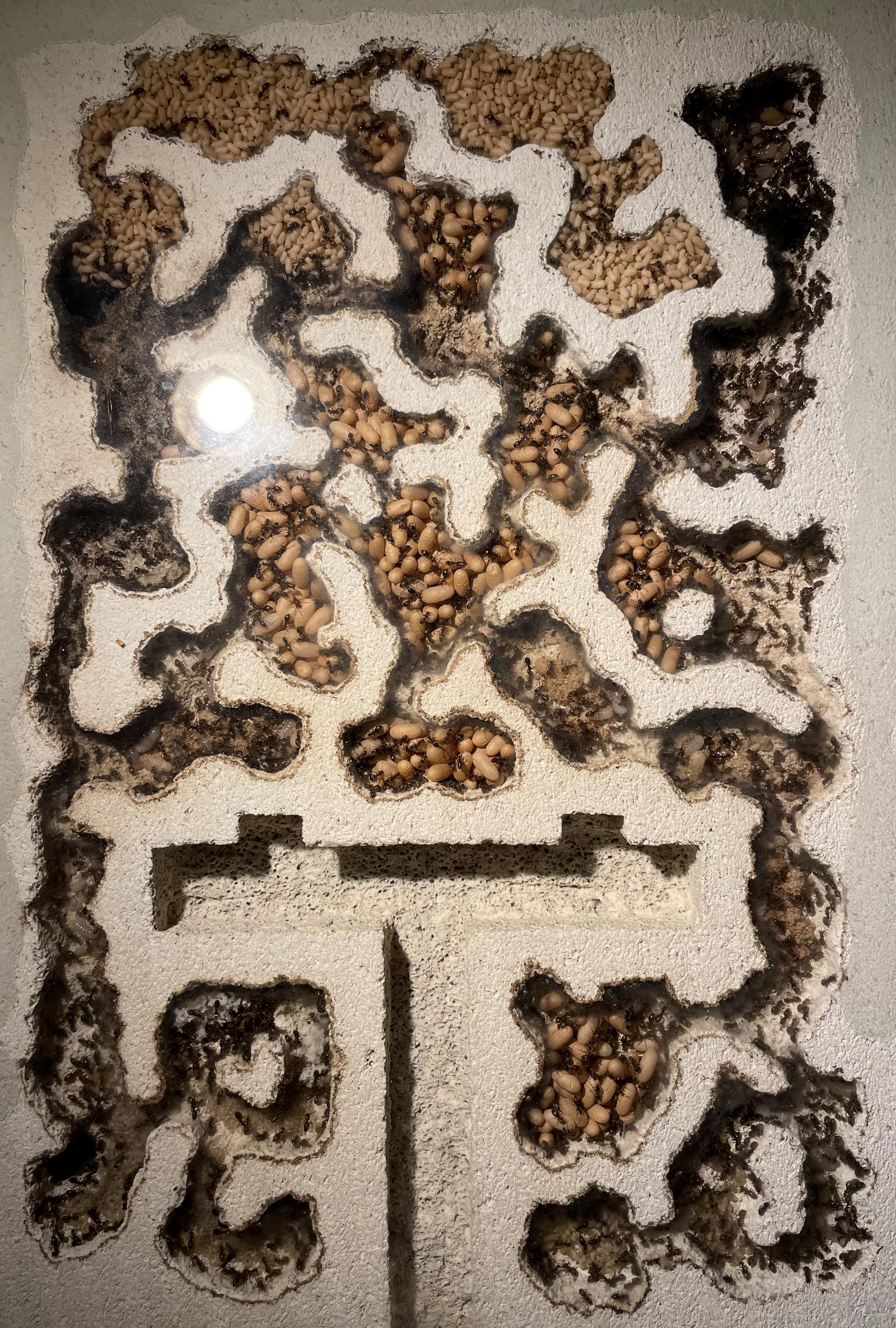 Their third and vertical nest. Scattered piles of larvae and pupae. Most of the brood form this nest was relocated to the new nest not long after it was attached: 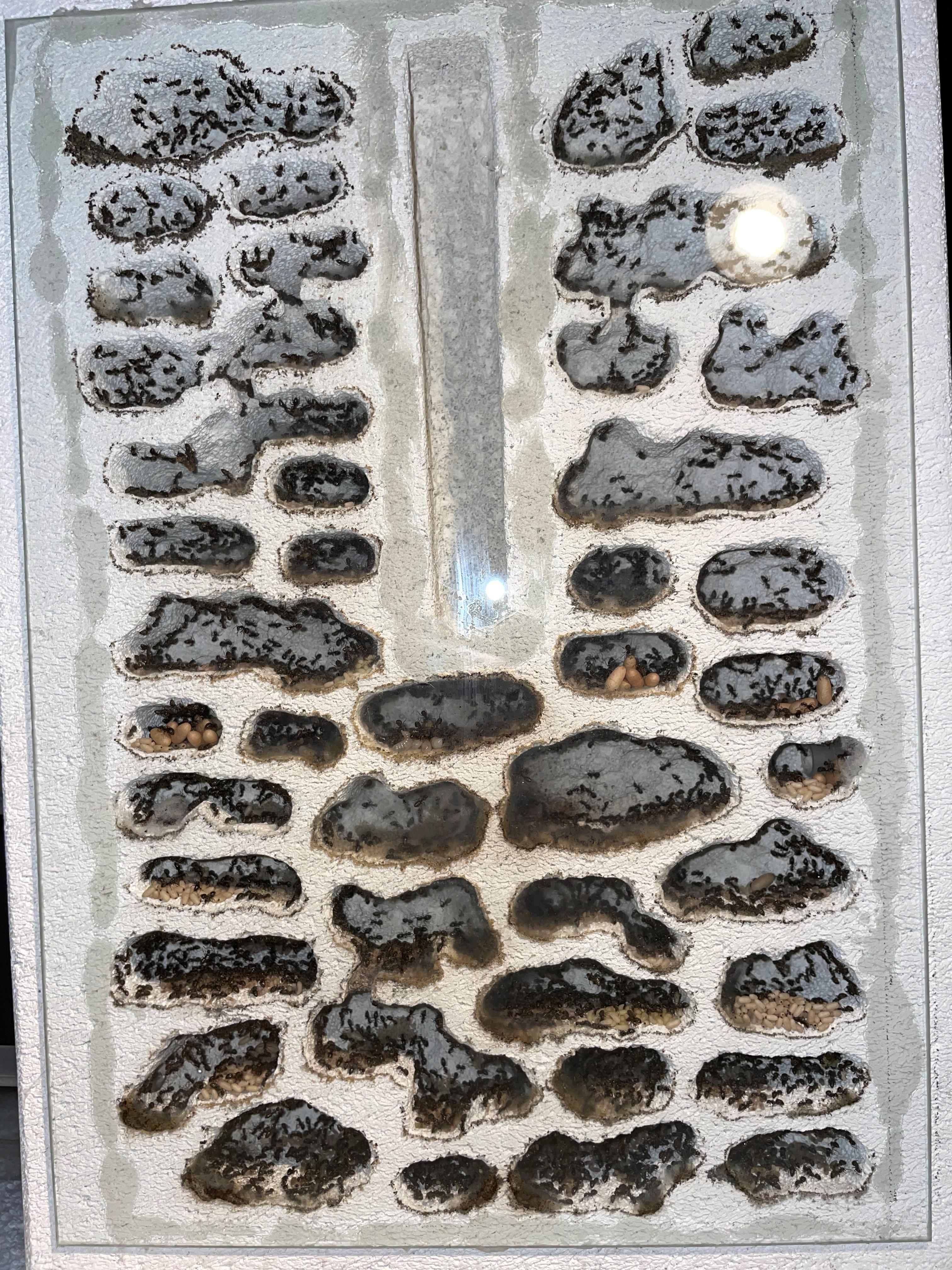 The new, fourth Ytong nest they received last week. Only used for larva storage at the moment: 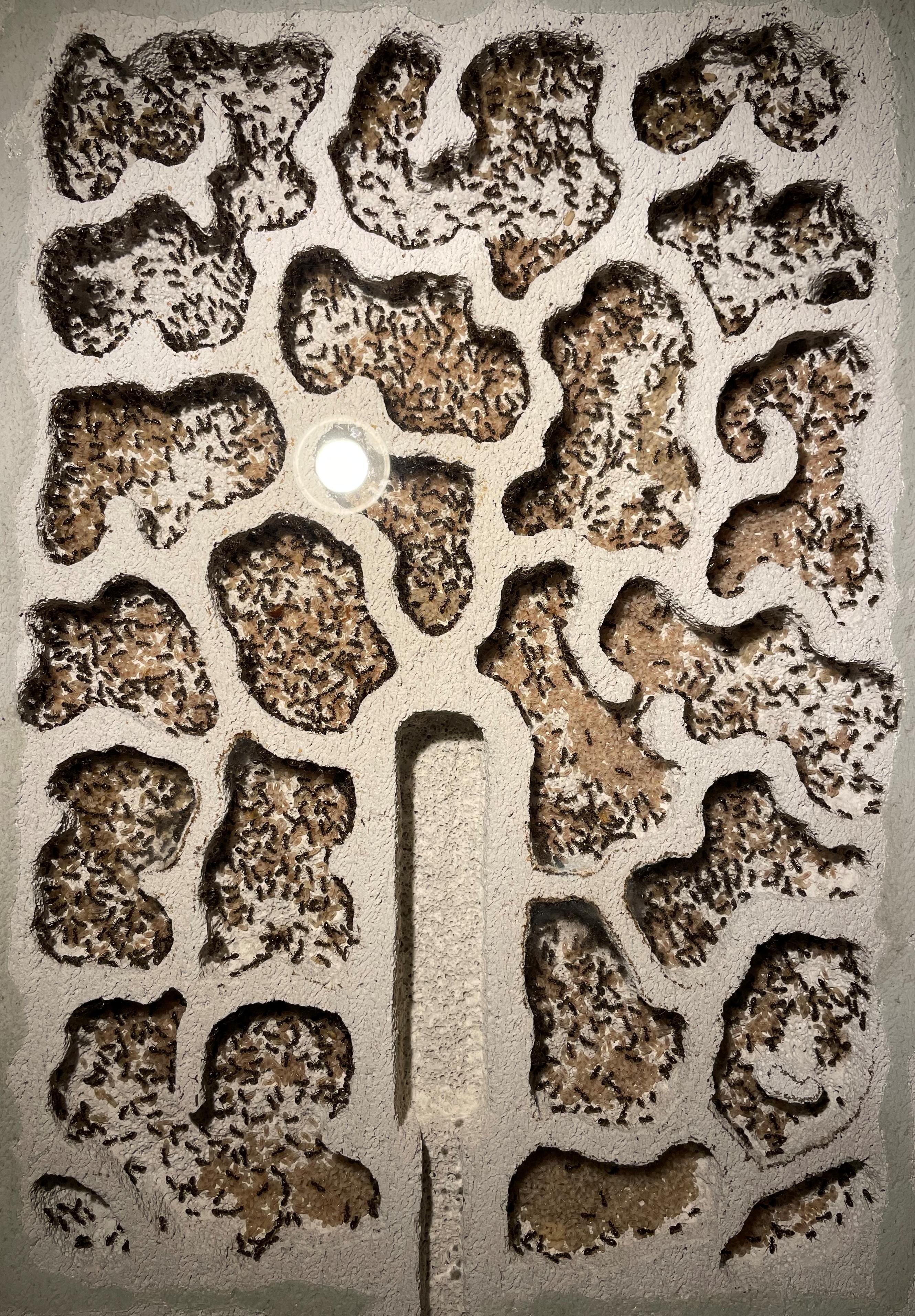 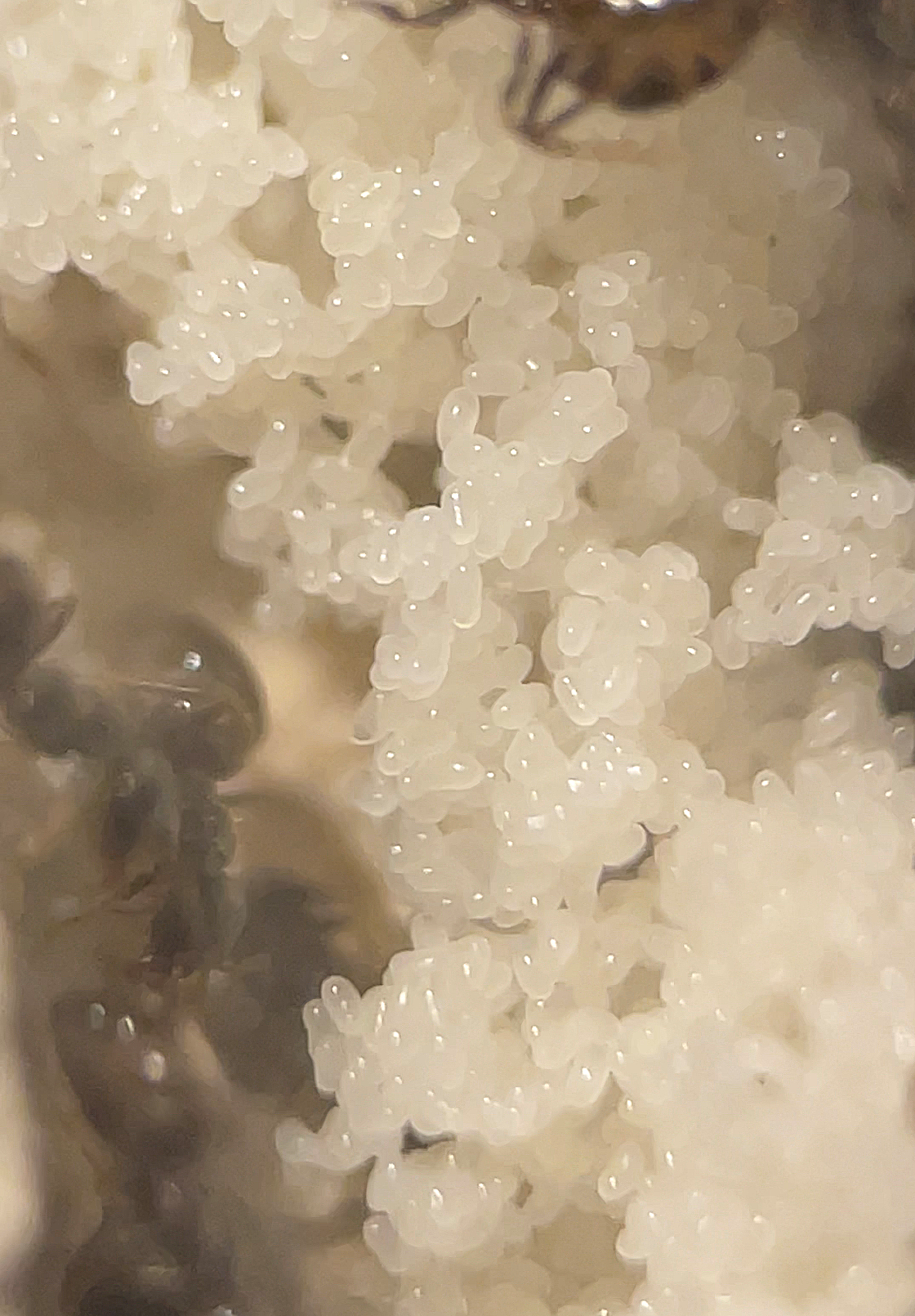 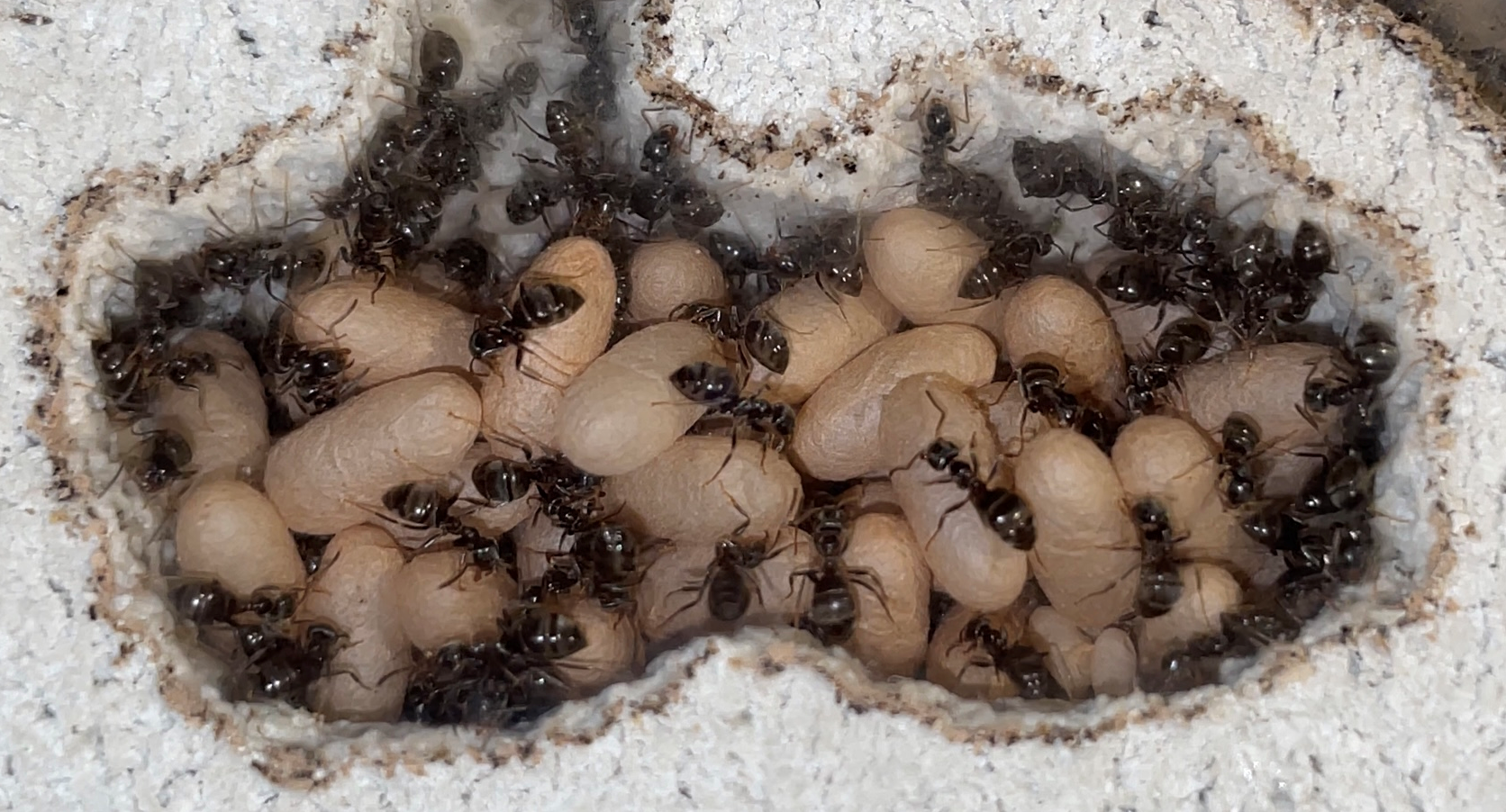 Left = larvae, right = the early stage naked pupae that I mentioned earlier. Recognizable because they got rid of their gut contents 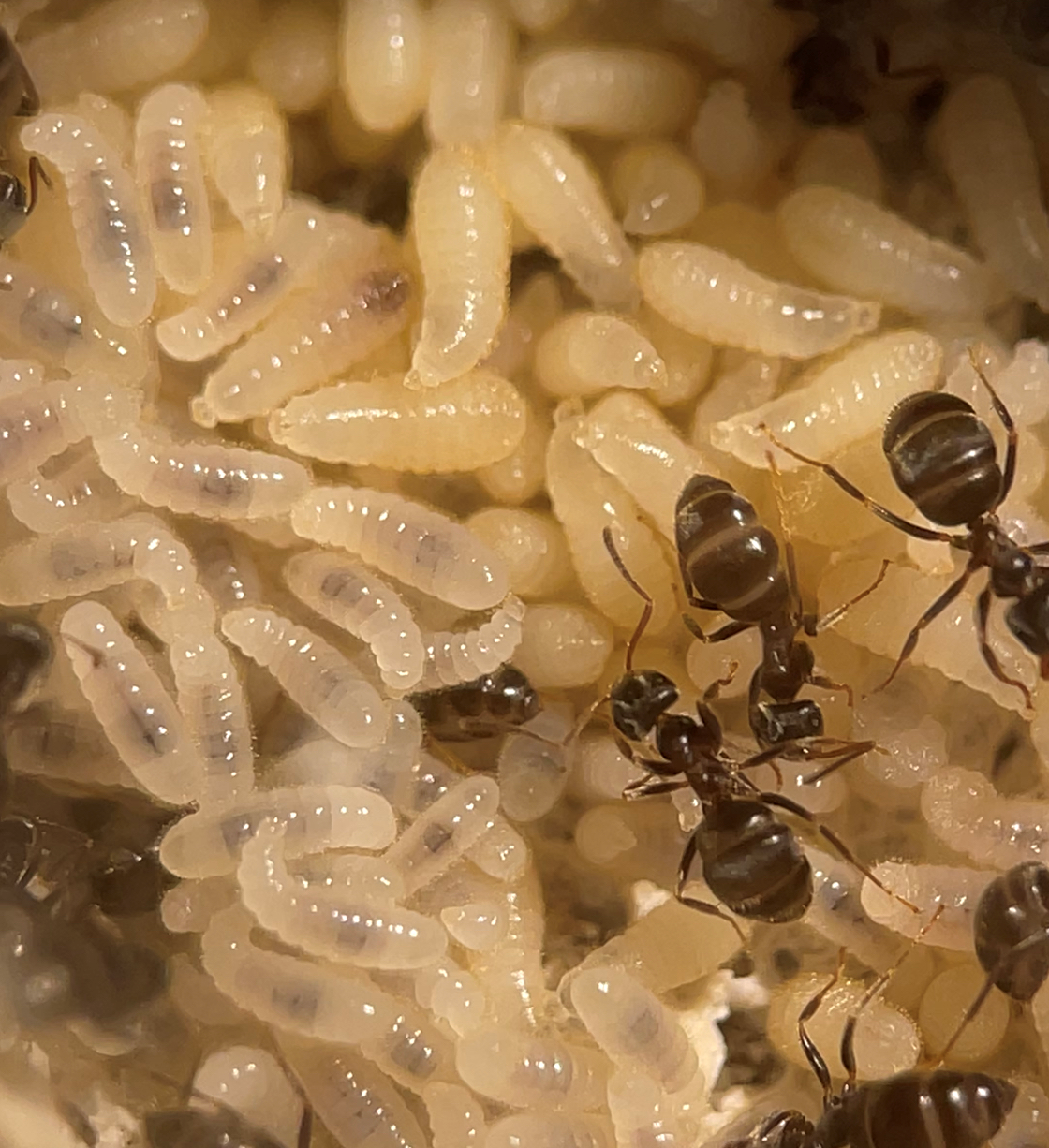 Some starting to go through metamorphosis: 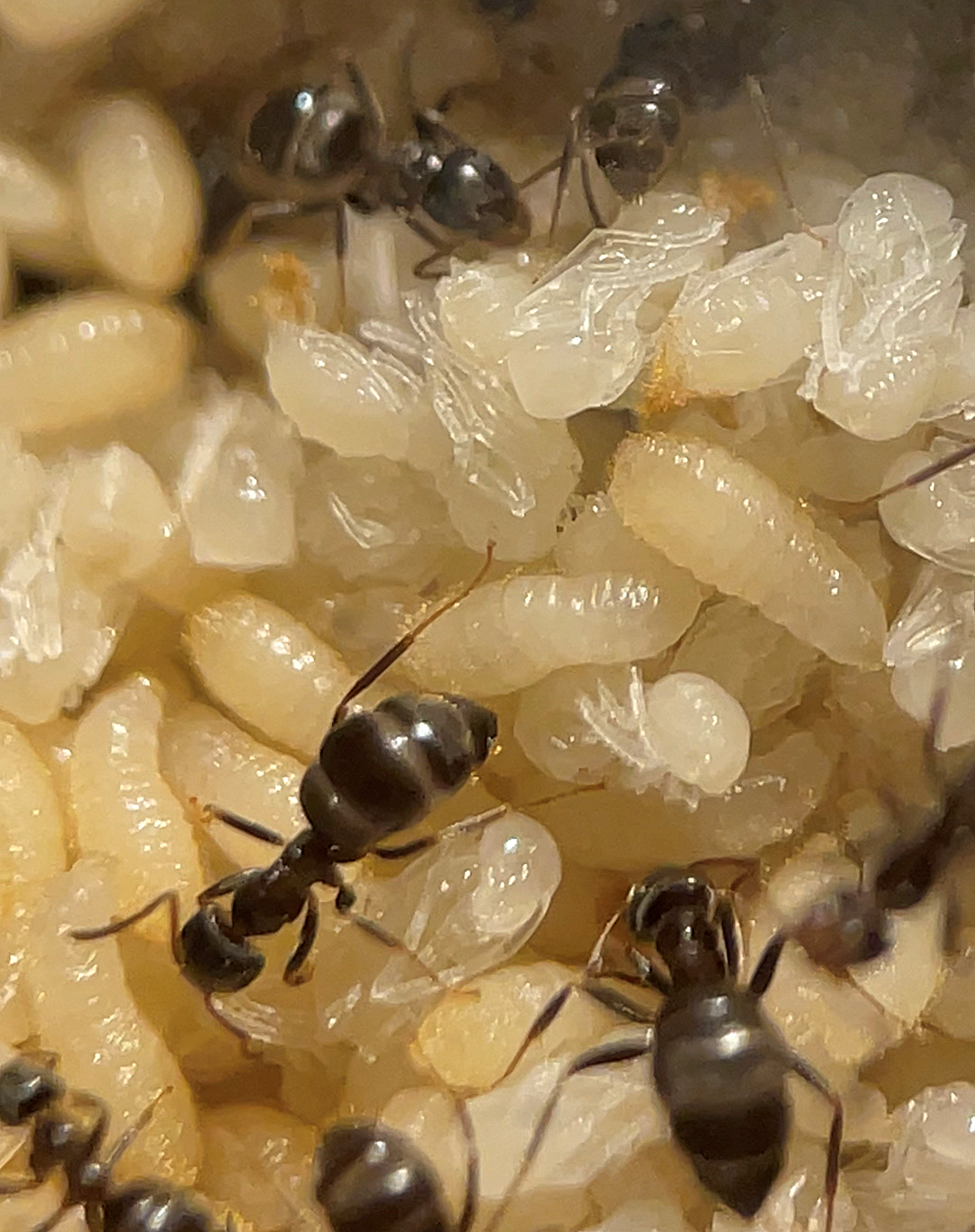 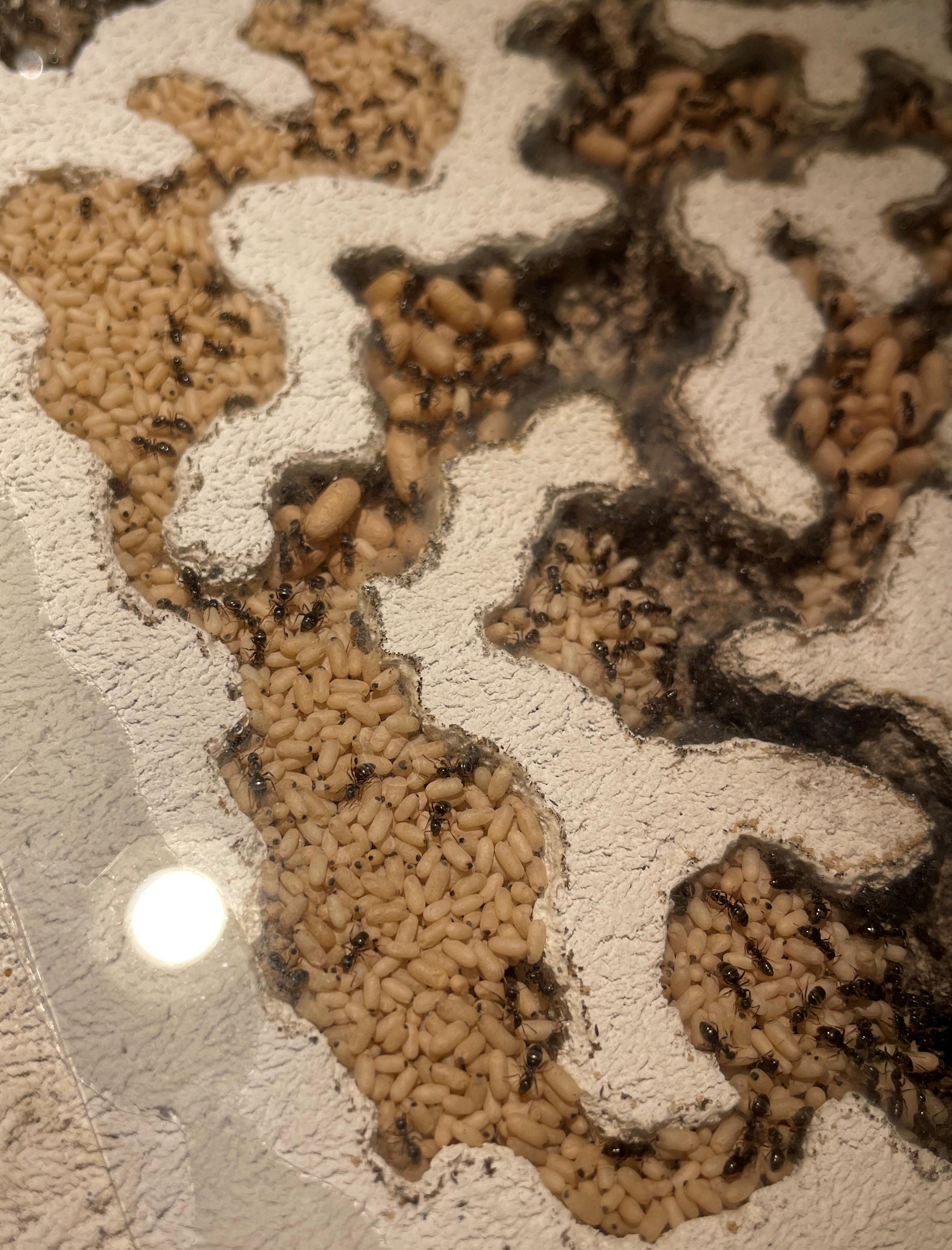 A little timelapse of workers cycling this pile

This made me laugh for some reason.

It is so cool how they organize their brood like that, with larvae in one nest and pupae in another.

Argh!!! I wish my work computer wouldn't block all the photo sharing sites.

Argh!!! I wish my work computer wouldn't block all the photo sharing sites.

Is there a setting that blocks them that you can turn off? I'm not sure why that would happen.

The colony breached through a talcum barrier of their outworld 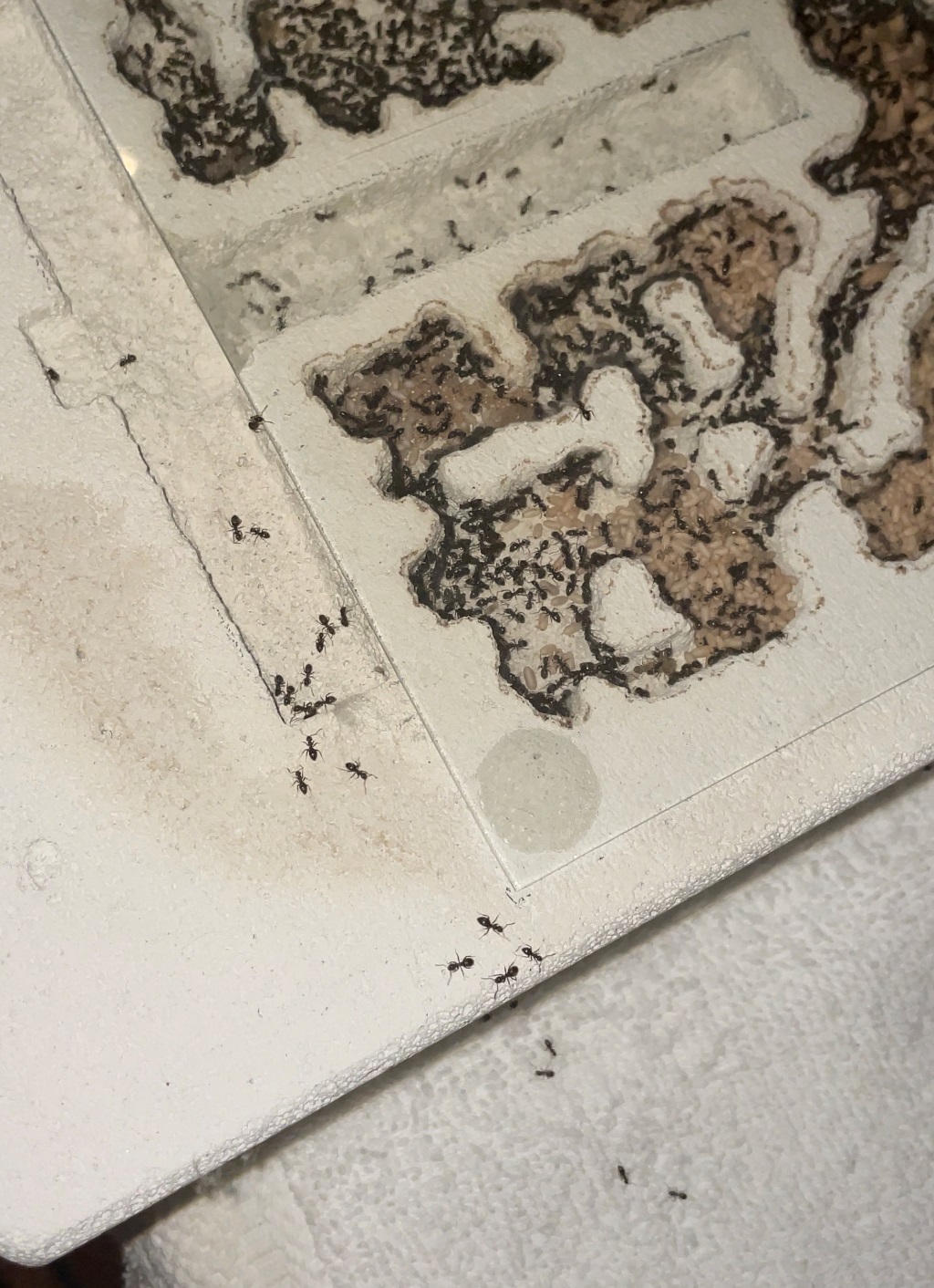 Or on the floor of the shower: 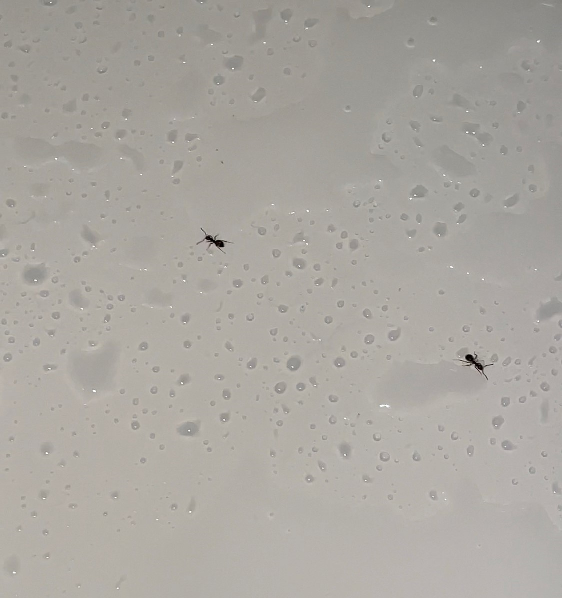 Most of the escapees were roaming on the floor. I returned around 200 workers to the colony. After five days I stopped seeing them

The colony lost maybe a month or two worth of last years' progress. The rooms in the nests were noticeably more empty after the escape.
Fortunately they had so many pupae that eclosed shortly after, they've reached pre-escape numbers again!

The last of the naked pupae eclosing: 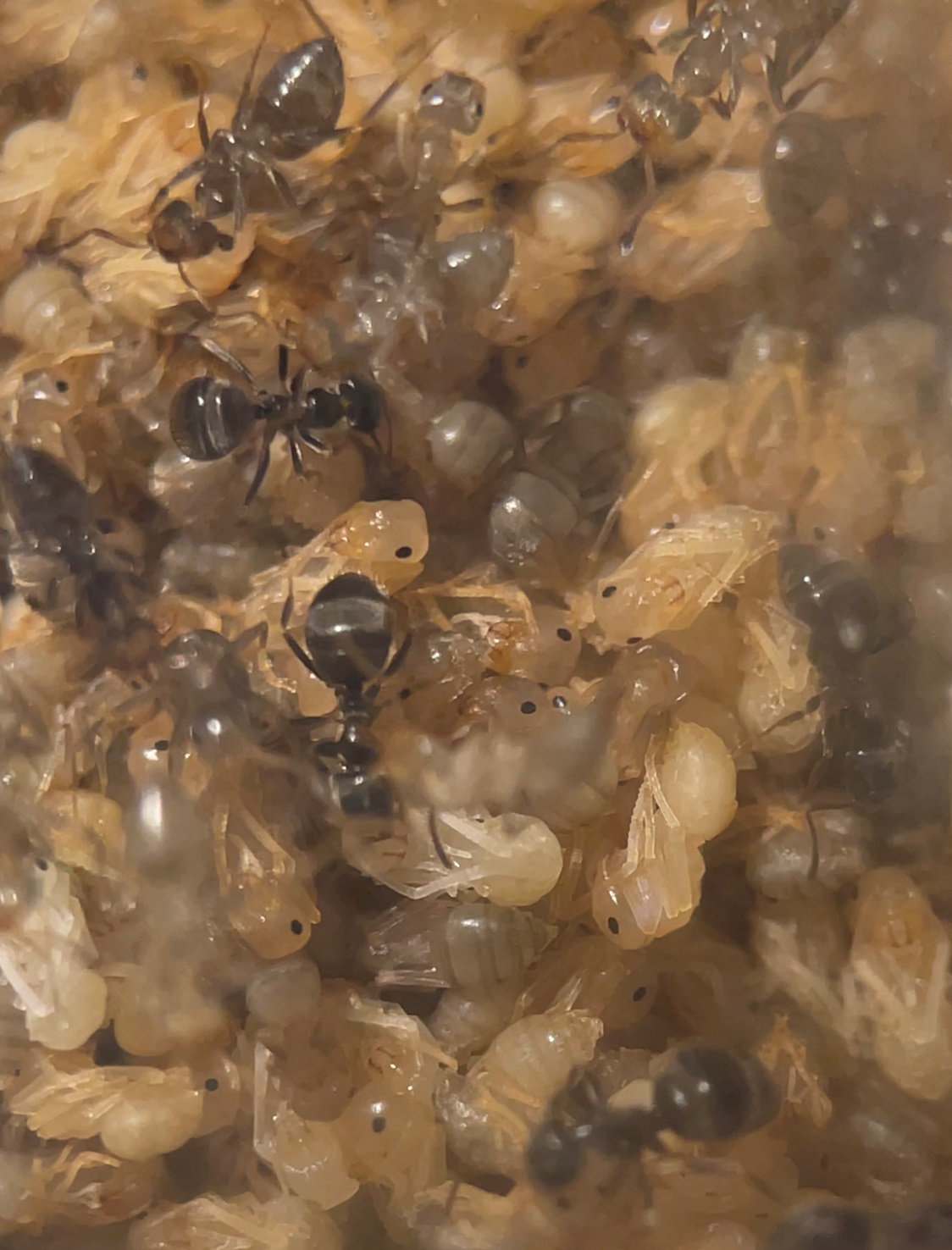 The alates have begun eclosing as well: 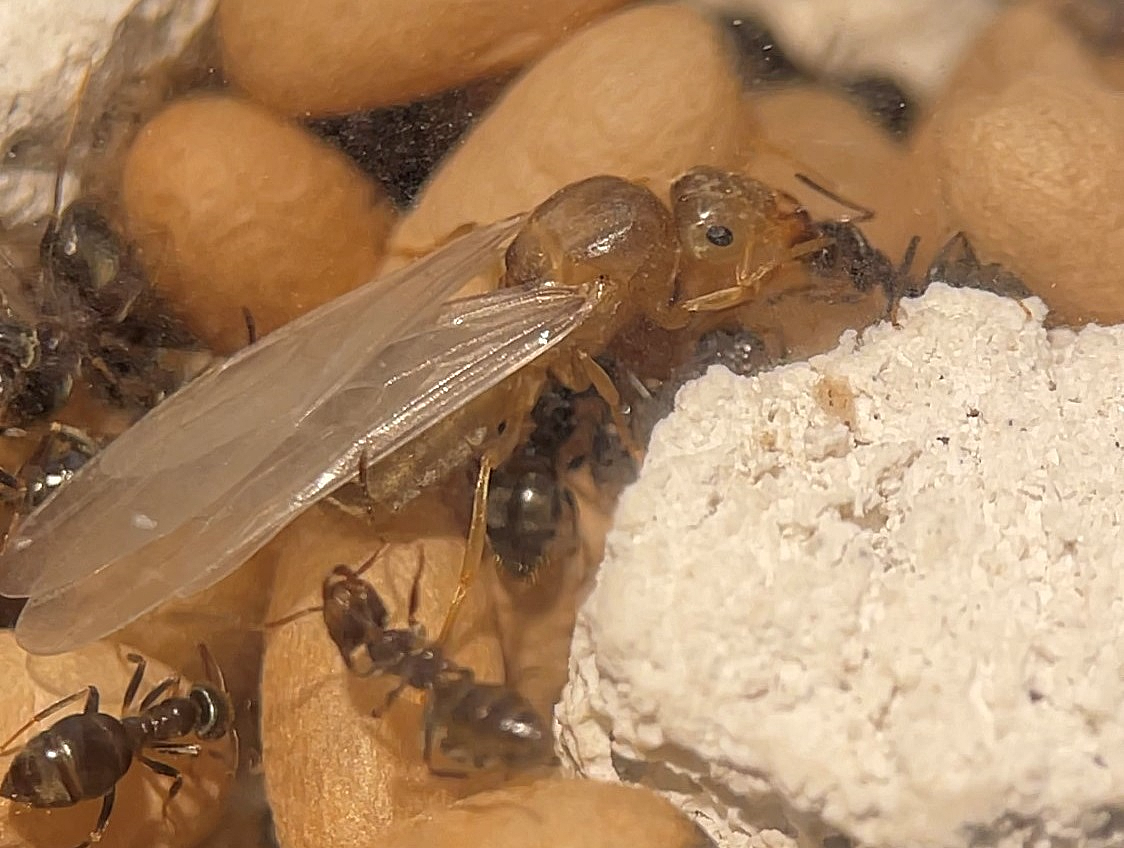 They are constantly being tended to by workers: 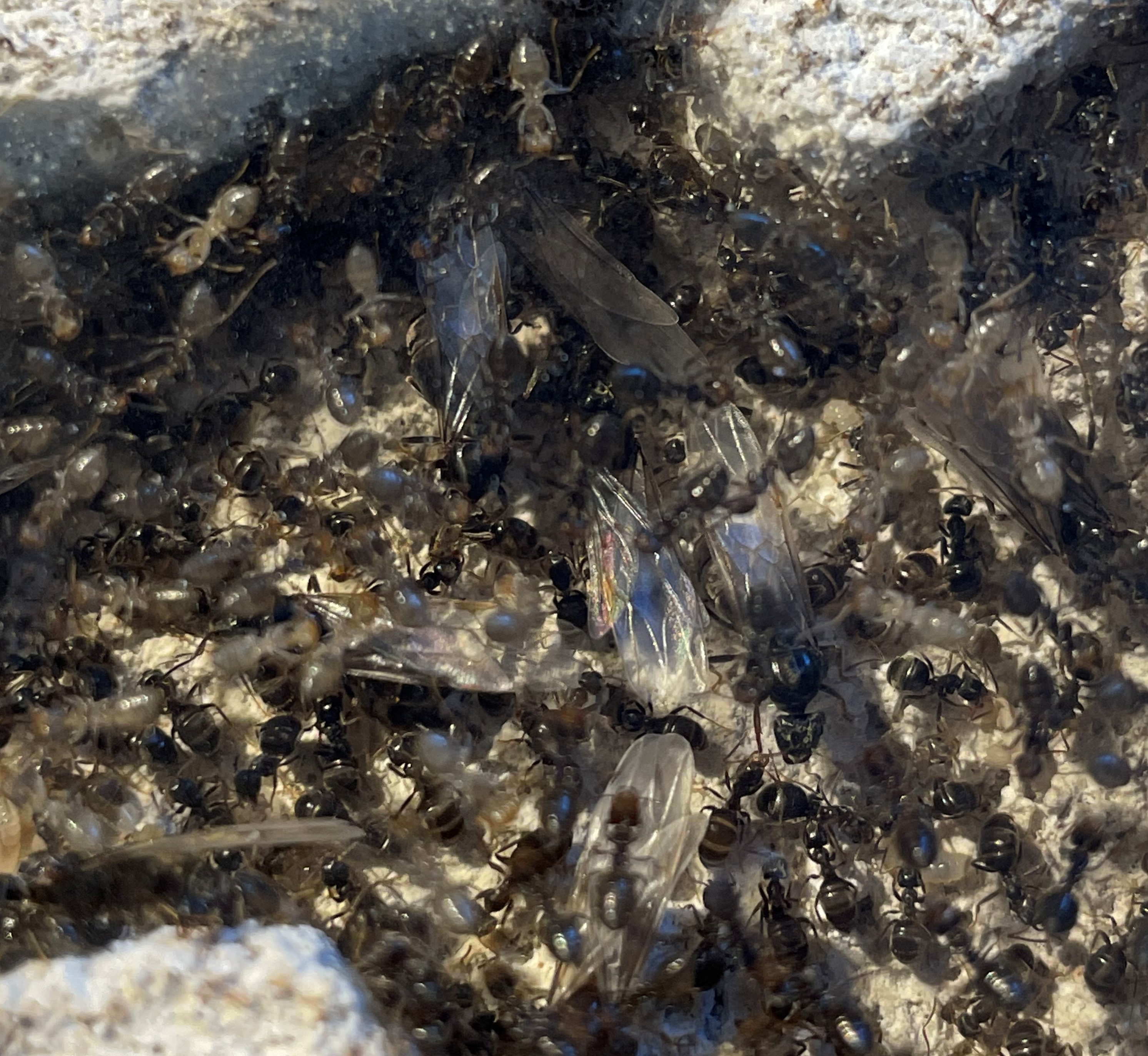 Not for the faint of heart but... A dove in my garden was eaten by a sparrow hawk, there was a carcass and tiny bits of meat strewn about... And I never pass on the chance to give my colony more variety in their diet 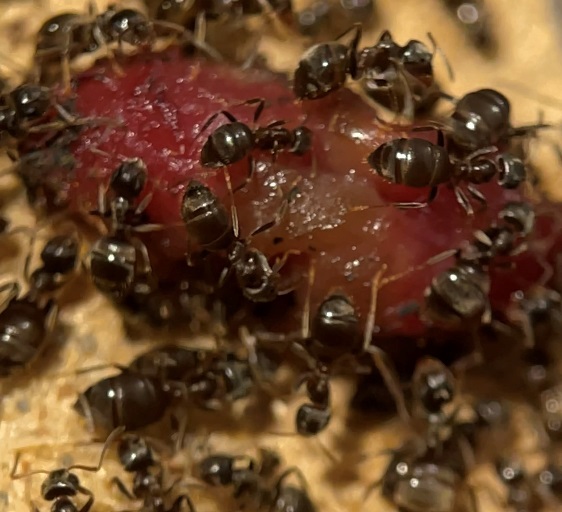 Ouch. I can feel your pain. I think you may need to look into some high quality fluon and good lids for a colony this huge.

Lovely photos; callow queens are always so pretty. How many alates do you reckon will be in the colony by nuptial flight season?

This may be a stupid question, but are you going to somehow allow the alates to fly out into the wild?

When you said 1000 or 2000 workers escaped to me that would of been more then my whole colony, but your colony is so big.

Bad news here. My colony has been stagnating and then shrinking, and I don't know why.

There are thousands of larvae but they have stopped to pupate for the last two months by unknown causes. It's as if they're in some sort of diapause.

Here's all the facts:

1.) Halfway May, all alate brood has eclosed. There are about 400 new queens walking through the nests and outworld (No male reproductives were made)
2.) The colony keeps growing for a while, lots of worker pupae
3.) About 2 weeks later, the last pile of worker pupae ecloses and there are no pupae left. The thousands of larvae are not pupating, though the nest conditions are still the same. Maybe they are stagnating because workers have to care for hundreds of alates?

4.) Every few days I remove about a dozen winged queens from the outworld
5.) In the evening of June 4, the alates are acting crazy. They are frantically running in the outworld and attempting to fly. They are taking off and keep hitting the walls of the outworld. It's still a month early for nuptial flights in the wild, so it can't be outside pheromones that's getting them excited. (a short video of them flying: https://www.youtube....h?v=Y5l8-2XSu2c )

6.) A few days later there is a massive culling. All alates die/disappear overnight.
7.) I hoped they'd return to normal after the alates were gone, but there is no change in their behaviour. The larvae keep growing until they hit their pupation size, but won't spin cocoons. The queen is still physogastric and pumping out eggs.
8.) I'm trying to give them different conditions. More humidity, less humidity, warmer nests, warmer nests & more humidity, warmer nests & less humidity, more food. Nothing snaps them out of it.

9.) The nests are becoming noticeably more empty as the old generations of workers are dying off and no new workers are being produced to replace them.
10.) On June 28 I place them in my cool basement, hoping to give them a sort of mini-hibernation. I will take them out soon, but my hopes are low.

Does anyone have an idea what's going on?

This nest was once filled to the brim. Now it's a wasteland: 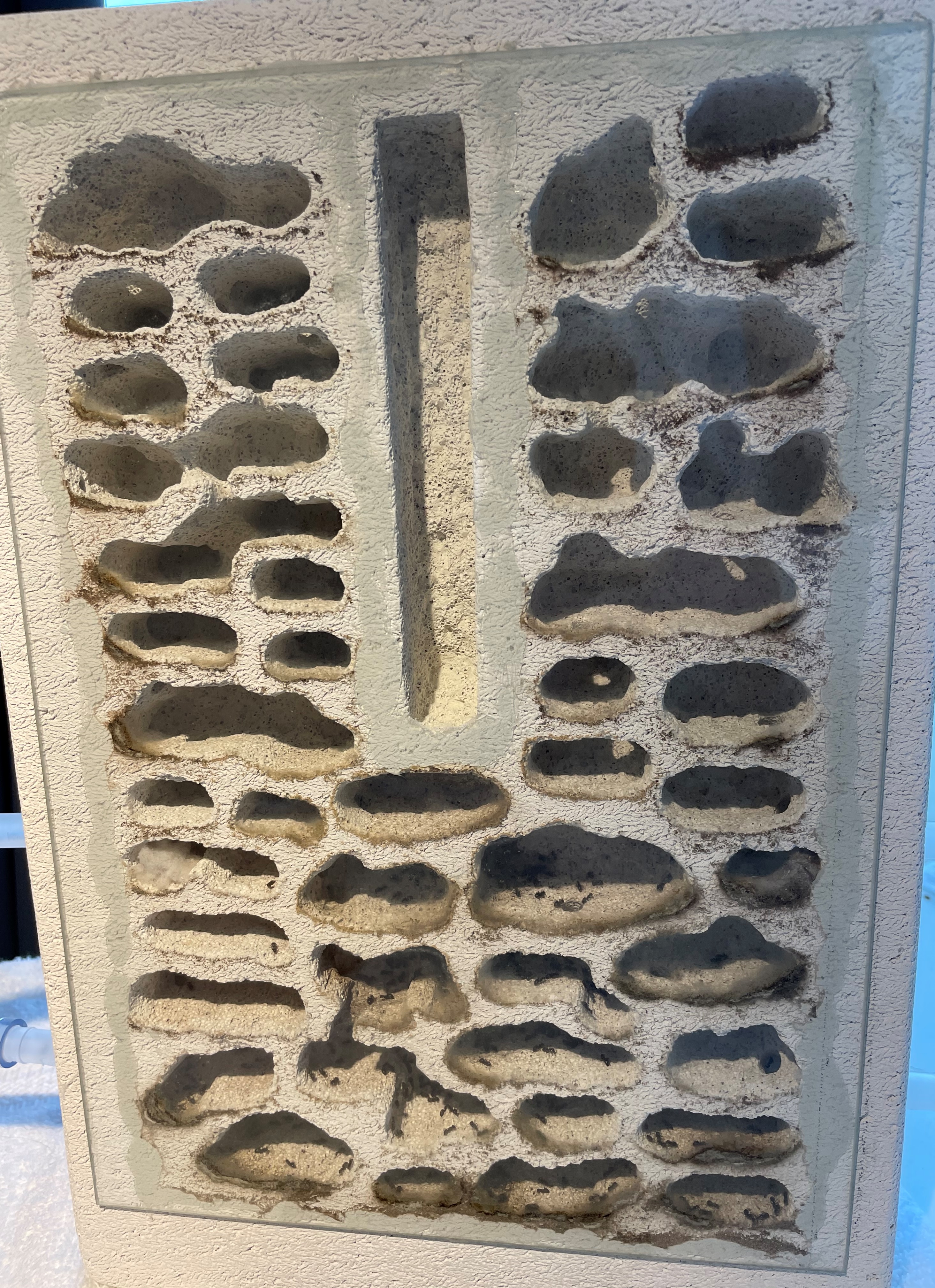 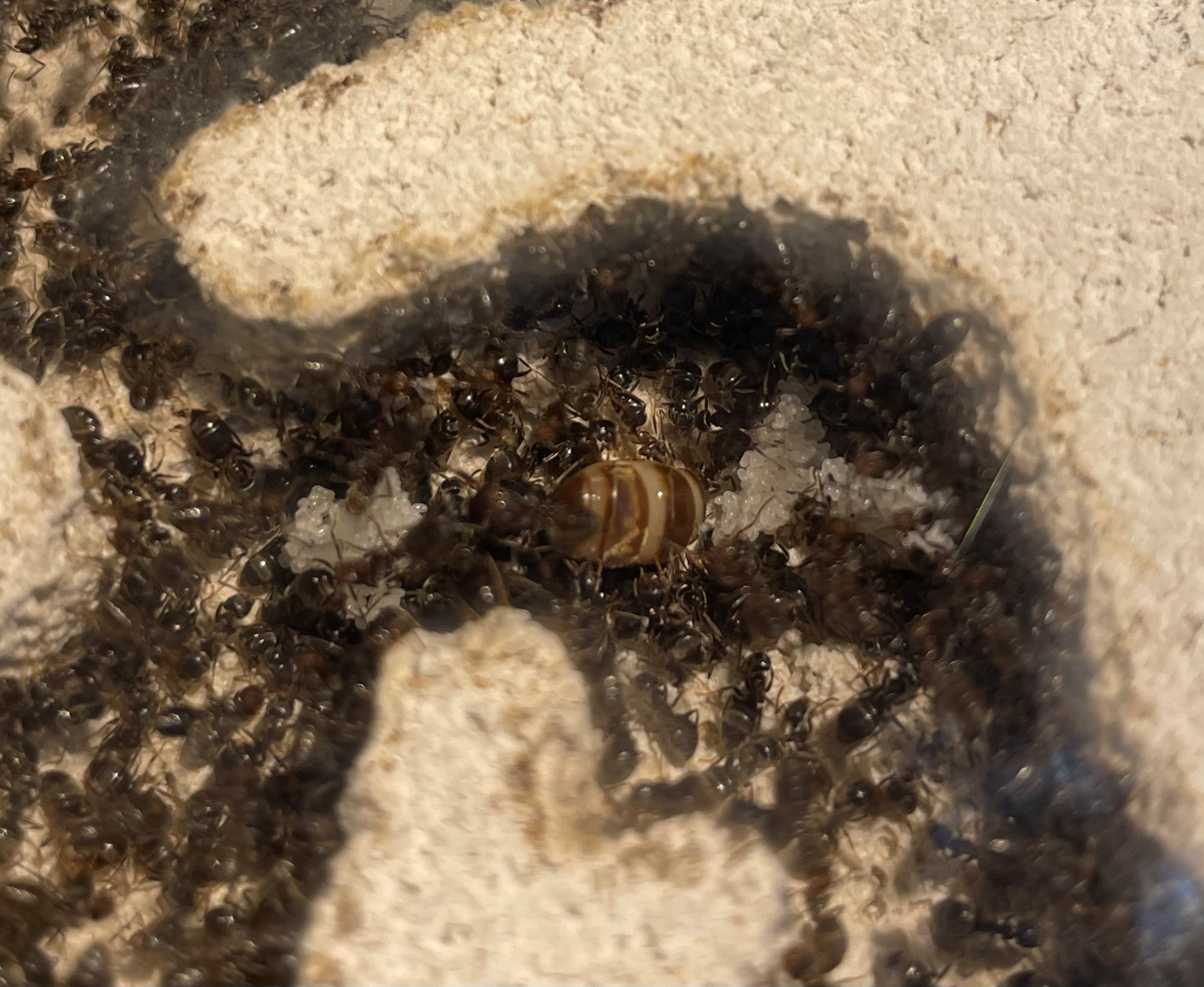 The nests disconnected and stacked in the basement: 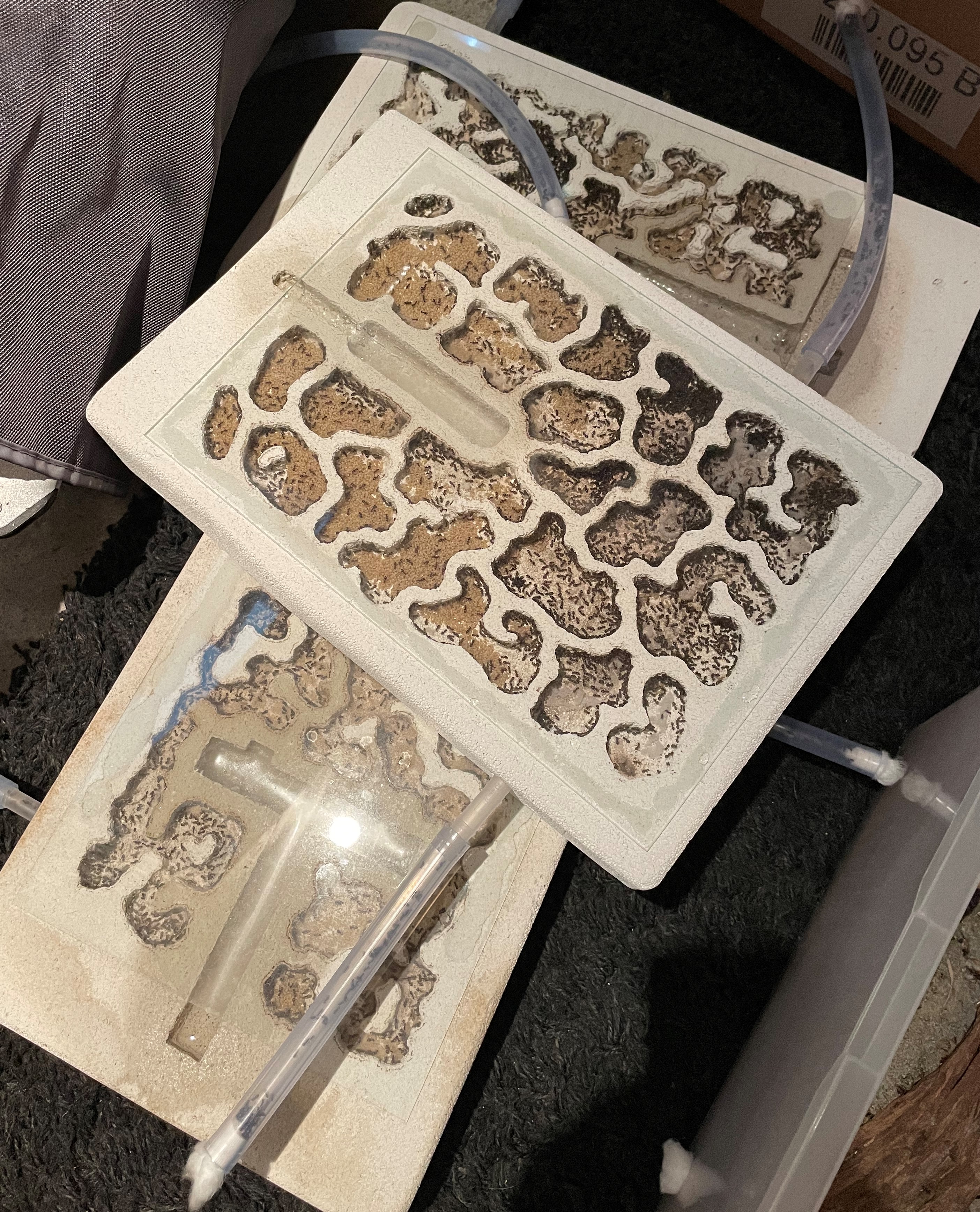 can you tell if the pupae are workers or could they be even more allates? Not that knowing that would answer it.

could you try giving a few pupae to another lasius colony to see if this is the fault of the workers? This also might be a bad idea because if this is a pathogen that would spread it. But you seem like the sort who might have a few lasius queens in test tubes and you could give one like five or six of the paused pupae.

That's all I can think of. this is very strange. following and hoping that you find the solution. This colony is glorious so I'm pulling for it to work out.

At least the queen is happy...

It’s very interesting you’ve posted this because I’ve seen a similar phenomenon in two other species of mine that just put out their first batches of alates, my Crematogaster and Nylanderia. In both colonies, growth has basically stopped. It’s even more pronounced in my Crematogaster colony, which has very little brood at the moment. I can only think it’s a natural phase of a colony’s development. My Pheidole just got their first queens, so I’ll be watching them to see if something similar happens. So few people get to this point that it’s sort of uncharted territory.

I wonder how often in the wild colonies make it to having second waves of reproductives after the first? I wouldn't be shocked if there was a drop off. It'd make sense for the colony to pour everything into getting out that first wave, then, only if they are still in that ideal stable location, with great food sources and few competitors they could keep going for another wave. (does that make sense)

So, if this is "a thing" that happens with multiple species that would be how I'd explain it in terms of evolution.

Get at least that first wave out. Get more if you can.

It's only the rare queen that hits the jackpot of putting the nest in a location with water, food, climate, predation advantages. So few queens found at all, fewer still make it to this important milestone of reproducing. I bet there is another drop off in numbers for those ant colonies that last for years and reproduce over and over.

That said you are giving your ants perfect conditions. Basically unlimited food, the choicest temperatures and humidity. So, maybe they just need to recover. Like after a woman has a baby, is she going to be running around doing things?

I agree, probably a natural recovery stage. I thought I had read an article about an every-other-year cycle for producing alates in the wild.

My own guess is that there's something very wrong with the colony's biological clock, because of the huge wave of alates early in the year

The colony started produced alates right out of hibernation in early March because of the abundance of food that I gave them. Whereas wild L. niger colonies here do not start producing alates until late May / early June. Maybe the workers & brood are acting like it's much later in the year than it actually is?

This colony had to maintain 400 alates for nearly 1,5 months, keeping the new queens' fat reserves up and keeping them fit, while wild colonies only have to care for their alates for 1-3 weeks tops? Because they produce them so close to the nuptial flights. I'm no expert so this is 100% an un-educated guess