11 replies to this topic 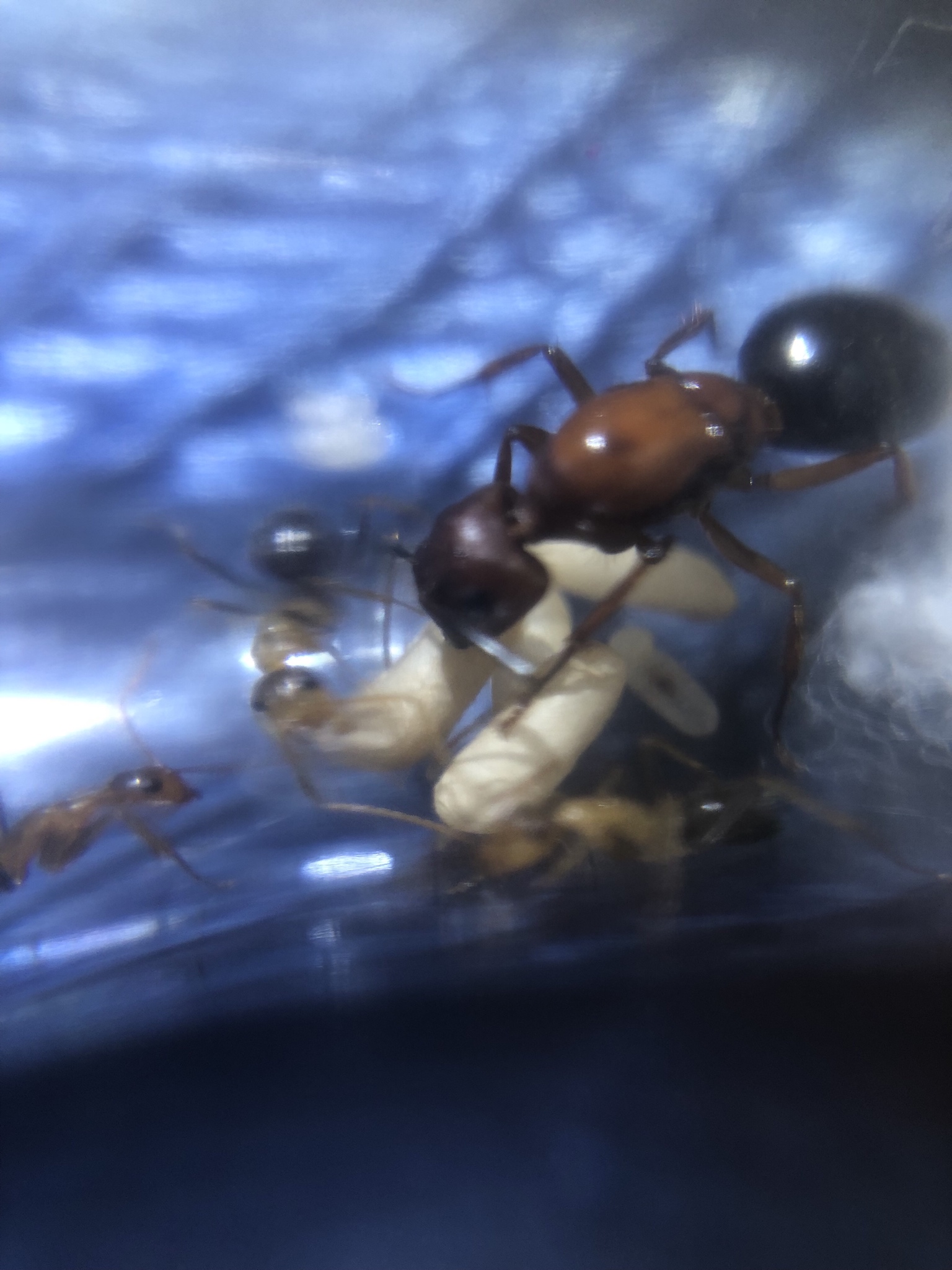 I got this founding colony with 4 workers, 4 pupae, and a clutch of eggs from another ant keeper. They came in a larger than normal tube which was very wide, and I planned to change out for a smaller test tube. This is the largest species I will be keeping, the Queen is about 14-15mm and the largest species of ant I have at the moment 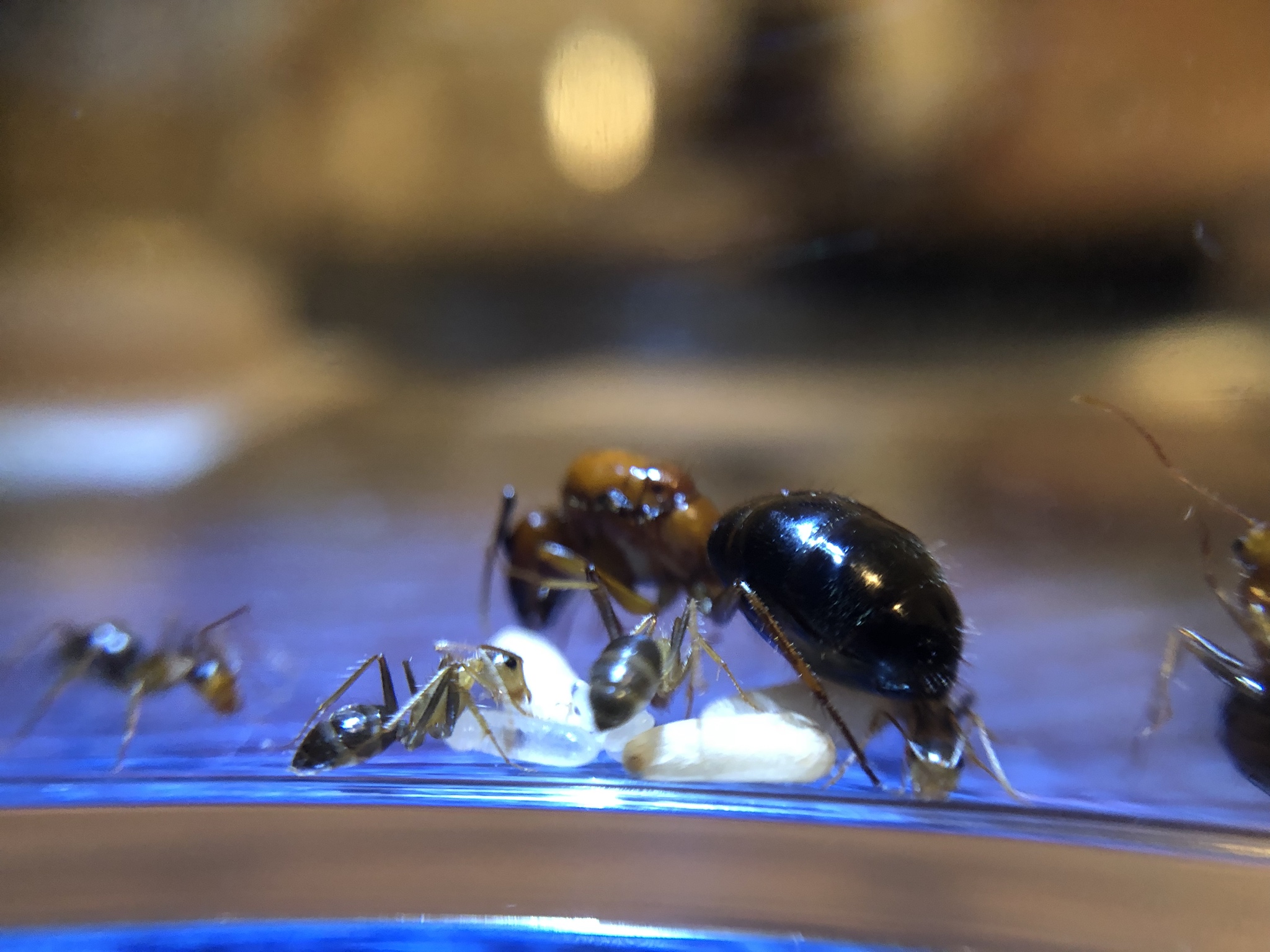 So I decided to put the tube in a clear rectangular polystryene container measuring 8-1/4" x 3-1/2" x 3-1/4" h, thinking it would make it easier to feed this small colony. Unfortunately they decided to move into their new outworld, but it gave me the chance to realize that a fifth worker(hiding under the queen) had eclsoed within the two days I had them in my care. At the time I was still waiting to get test tubes to give them a comfier home.


I had cleaned out and changed both the cotton and water in their wide tube the day earlier hoping they would go back inside and when I decided to check on them I realized that another worker has eclosed. I was able to get a short video of my new worker being groomed by her fellow sisters, the fifth worker can be seen out of focus in the background in the out world. 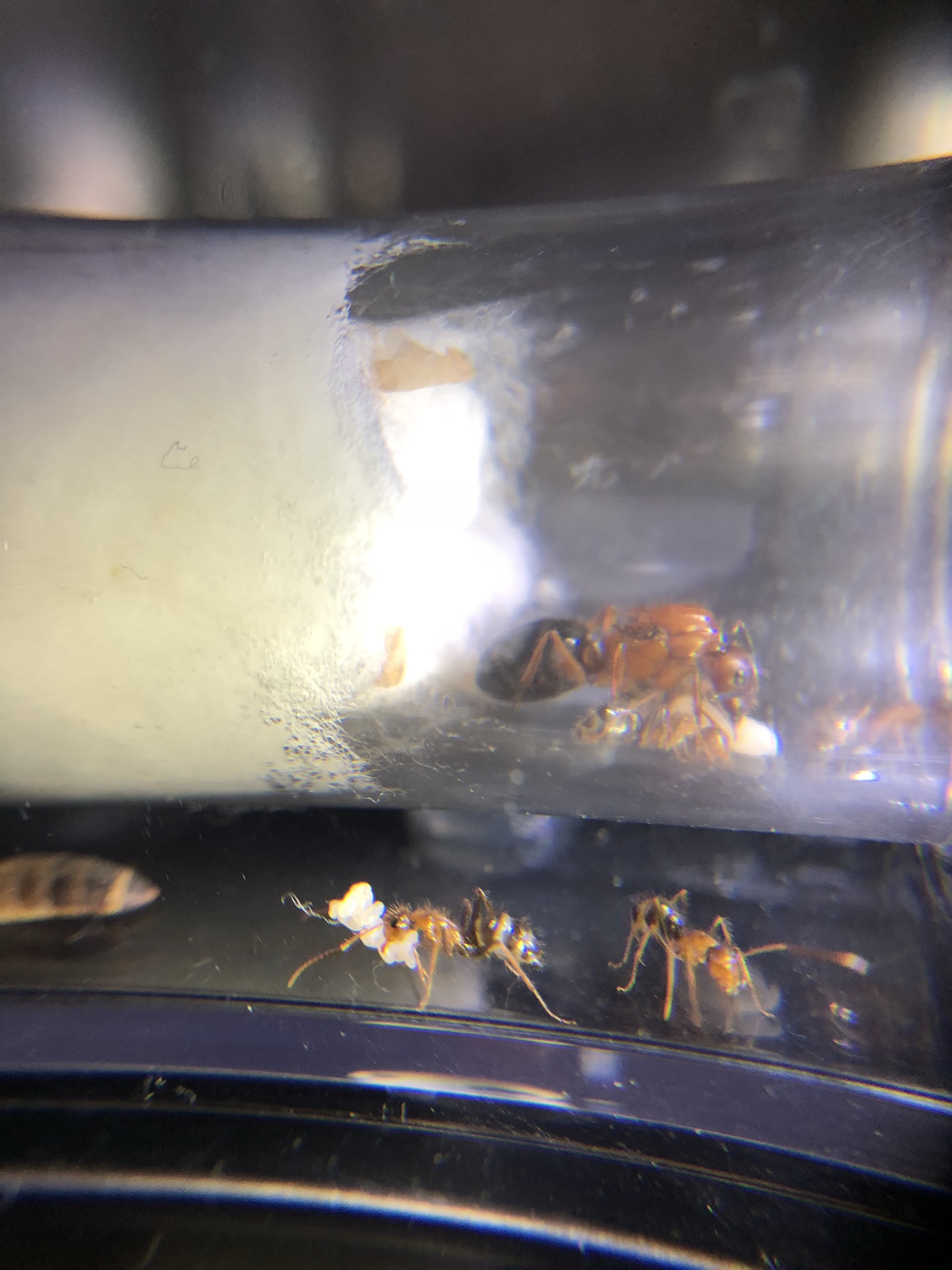 So I checked in on them after five days and was happy to see that the queen was staying put inside the tube, even though it's so wide. But I did catch a worker running around holding the brood pile, which worries me that they'll leave their tube again. Somewhere in those five days I also had another worker eclosed, which I noticed because there were only two pupae under the queen. 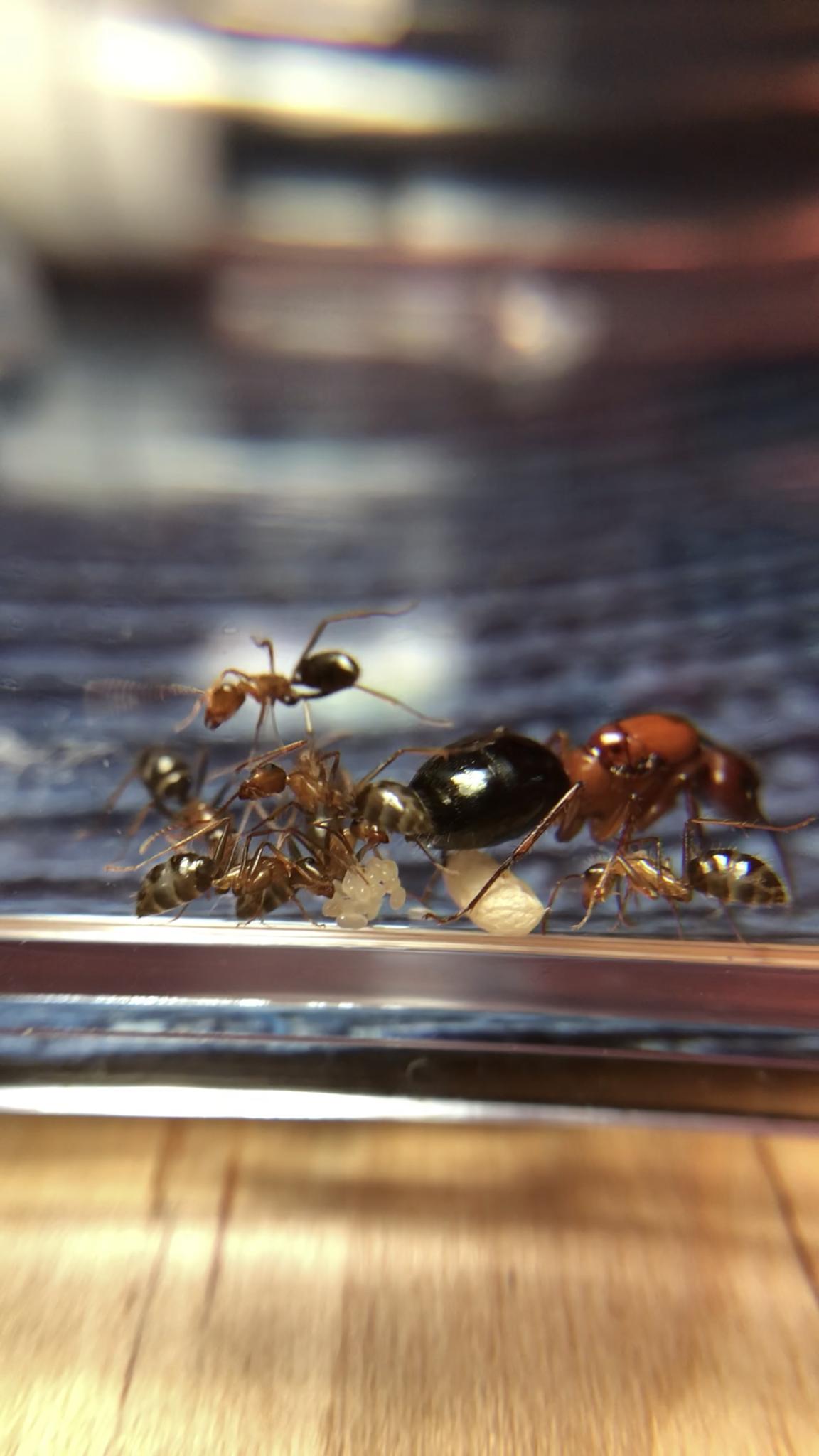 Unfortunately just a day later and they've decided they like the out world over their tube, I believe it's because they're trying to get to the warmth coming from below the clear box. I'm waiting for my test tubes to get delivered so I can so I can switch out the obscenely wide tube for something more appropriate 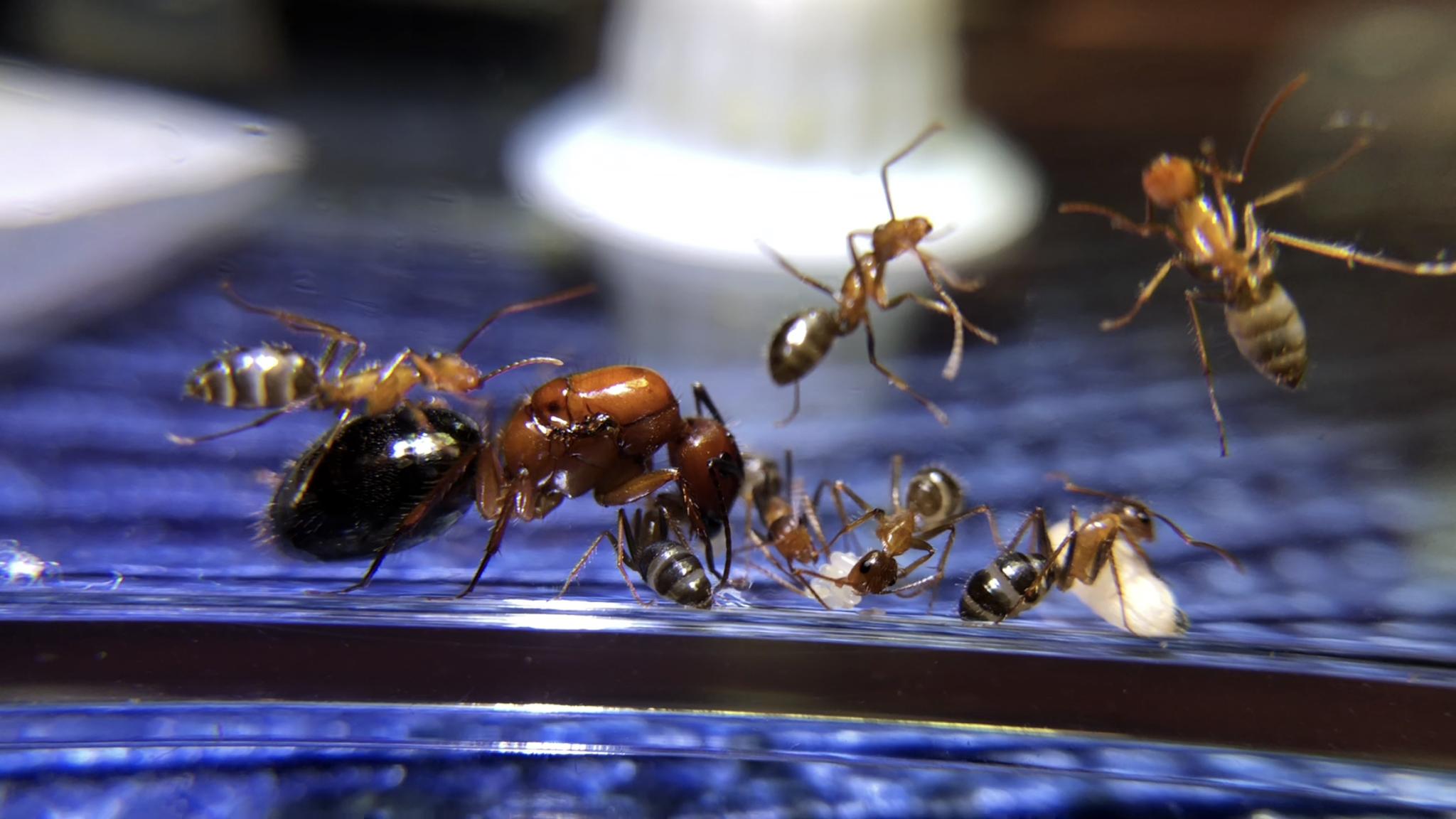 So I decided to take a quick peek in on them and once again saw they were in the out world, luckily the test tubes had come in the day before. So I took out their big tube and gave them a tube that I connected an acrylic elbow onto. Happy to report they took to it immediately

So around early August my colony made it to 10 workers, so I decided moved them into a vertical mini hearth from THA. Since that point, I've made sure they have honey in their feeder, and I've provided them with a whole super worm every two days. 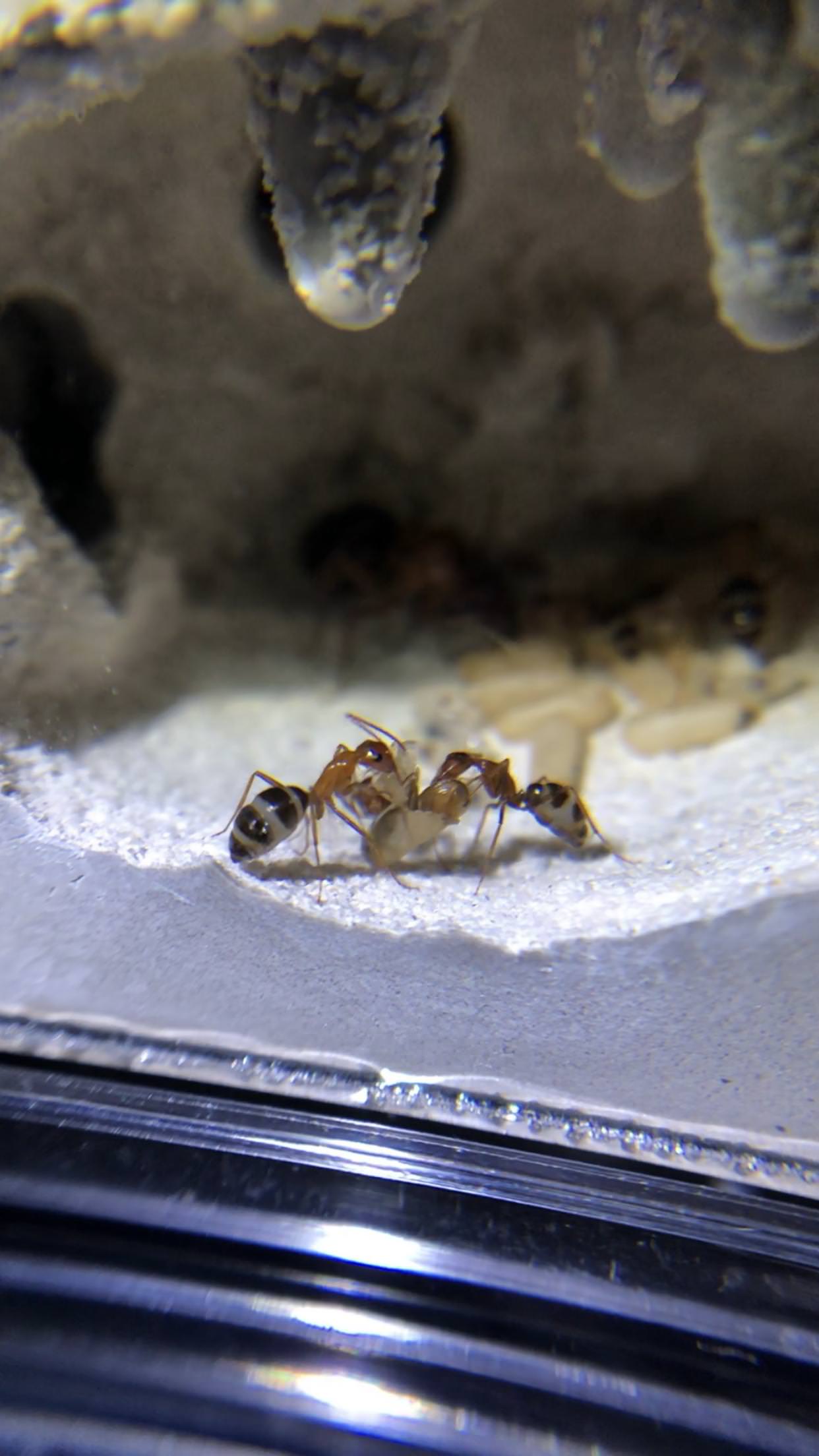 A worker eclosing on September 14th

A video I took on October 9, 2018, where there's a notable difference in the sizes of the worker force in my small colony whose numbers are around 25-30 at this point.

This was in November, just a short video of a larva being groomed. The worker count at this point was in the area of 30-40 ants not many more than in October.

This was on the 1st of December and a wider shot to show how they are beginning to blanket the floor of their mini hearth, the worker count is somewhere around 50-60

So it’s been about eight months since I’ve updated this journal and the colony is a little over a year old. Since then I've had to move the colony from a THA Fortress into a double-sided THA Nucleus. They’ve stepped up food consumption, as they've been devouring any protein dropped into their outworld. They are also going through a large feeder of sunburst ant nectar and water on a weekly basis.


One of the largest majors produced by this colony so far


I recently tried frozen crickets, and it seems they’ve taken to them quite easily


One of the spots in the nest with larvae

Also tagged with one or more of these keywords: florida, wander, camponotus floridanus, camponotus