23 replies to this topic

The journal of a C. scutellaris colony. Queen caught in a local nuptial flight September 2017.

The queen went through her claustral phase in AntKit's acrylic founding chamber with an attached water container.

She is actually the only queen who successfully went through the claustral phase in it. I have two of AntKit's acrylic founding chambers, and had 4 failures and 1 success.

It is most likely due to a poor hidratation system, and the chamber being too large for the queen to feel secure (4x2cm).

The moisture sponge is not accessible to the queen, so she cannot drink from it, unless almost flooded and water delivered through capillary action between layers of acryl.

She spent most of her time tucked inside the "sawtooth connector" rather than inside the nest. All of the queens preferred the narrow tube-like space of the connector, two of them so much that they were constantly in contact with the wet cotton of the attached water tank. They molded and died. It is a pity the "coming soon" queen excluder accessory never saw the light of day.

I must also point out that she is doing worse than two other C. scutellaris queens that got test tube setups. By the time hey got 10 nanitics each, she had only gotten four. 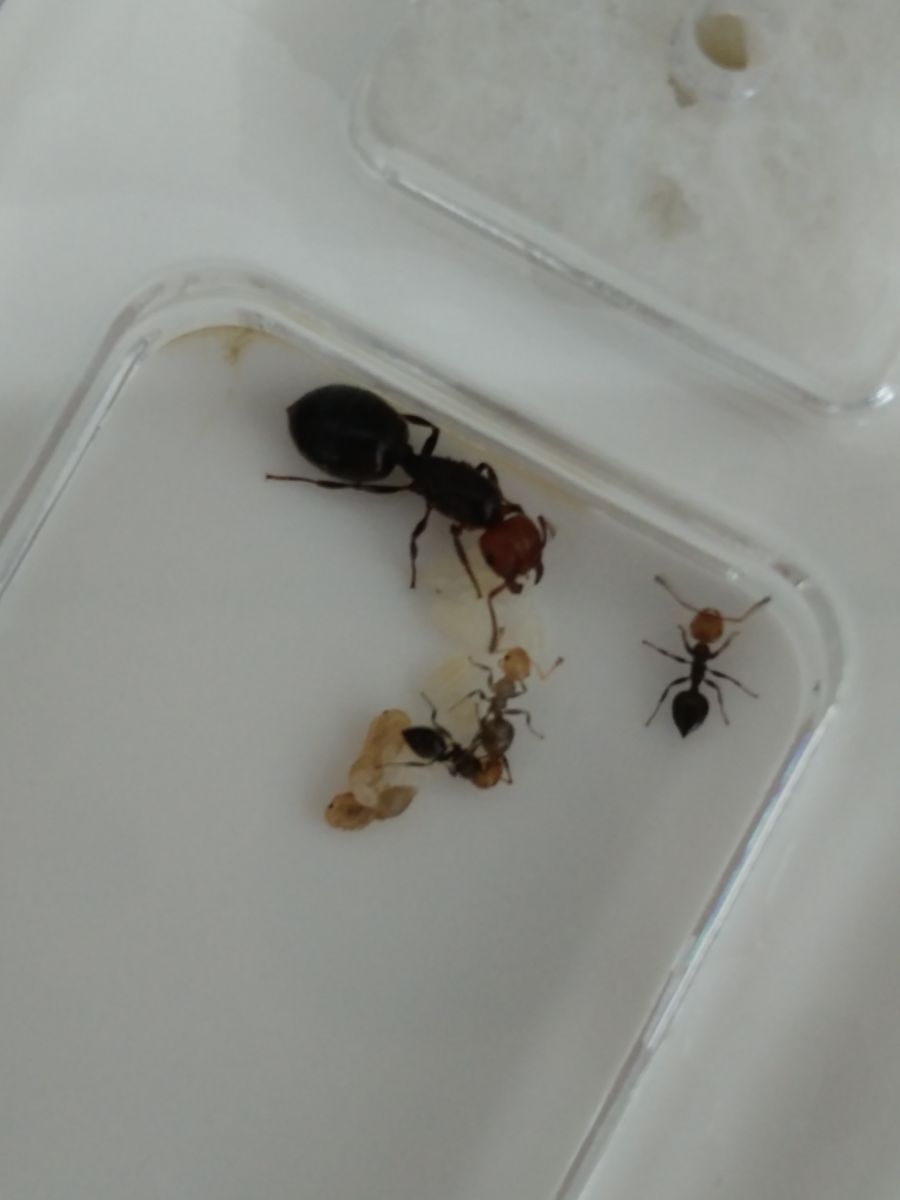 She now has eight workers and several larvae. I connected the AntKit nest to a formicarium with an outworld and additional nesting space.

I decorated the outworld with a pine branch that I found locally and baked in the oven. It is serving as a "dining table" as the outworld lid is pretty small and hard to reach the bottom thank you for your journal I think you'll have a lot of fun with this species.

I also kept this species two times. If they survived founding phase they will grow very quick.

They grew close to half a thousand workers, and had larvae to double that!

I had nowhere near the conditions to keep them, so I passed them to a fellow countryman and antkeeper.

Once a colony gets bigger, I noticed that a percentage of workers stays outside at all times. I had trouble convincing the ants to move into a test tube entirely.

In the end, I shipped them in two test tubes, but a bit more than 50 ants would not get inside.

I kept them for a future adoption experiment. Once I catch a nuptial flight, I will introduce them to a queen.

Even now, they hang out outside, form a body heap, reluctant to settle in a nest. I guess they are searching for their lost queen.

I fed them some protein jelly from antskeepingdepot and they started devouring it. My Lasius niger, on the other hand, are not so hot about it. 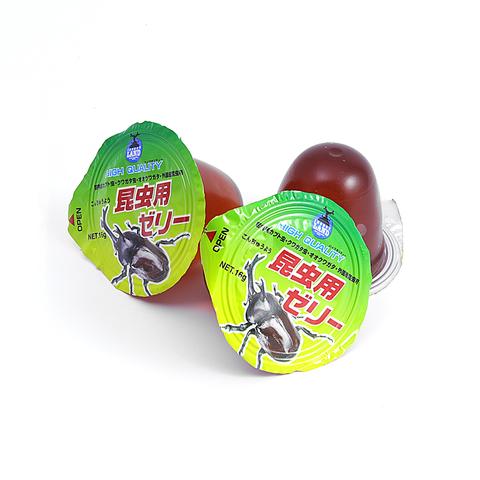 A very peculiar thing happened. I had around 50 workers left, after I gave the colony away. I noticed 4-5 larvae were left behind as well. The ants took care of them, until a couple of days ago. Approximately one month after they lost their queen, they stopped caring for the larvae. In fact, they ate them. They were provided with other food, so starvation is not the cause. I guess queens produce a pheromone that compels the workers to tend to brood...

Found a queen de-alate yesterday. She was wounded - had only a single antenna. I believed she would be unable to survive on her own, so I made an experiment with her.

Not believing she had much of a chance, I simply dumped her in the orphaned colony's outworld.

In an instant, the workers were swarming her, their gasters raised in alarm. The queen had a visible drop of distress pheromone on the tip of her gaster.

I thought that was it, that she'd be eaten, and went back to work. In the evening, I saw her still in the outworld, still covered with workers. I concluded they were eating her. Also she was positioned in their dump heap close to an empty grasshopper shell. So I went to clean the shell, lifted it with tweezers, and lo and behold - the queen was holding to it, moving her legs!

It is too early to tell, but looks like the colony accepted the queen... time will tell whether successful.

If it ends up in a stable colony, Crematogaster can be added to Camponotus as a species that exhibits "adoption" behaviour.

Crematogaster can be added to Camponotus as a species that exhibits "adoption" behaviour.

My Lasius neoniger colony was founded by adoption.

I will have to ask the guy about the big colony. I'm guessing it amassed thousands this summer

About the small colony, they started behaving differently...
Previously, they were unorganized, all over the place... trash all around... They never concentrated in a single spot. More like they were "diffusing" over the available area.
Now that they have a queen, they picked a room to hang in, and started organizing trash. Interesting. So, apparently, they don't go out of the substrate unless they are given protein. Then they come out in hundreds, their marching lines easily observable.
Here's a video:

Crematogaster can be added to Camponotus as a species that exhibits "adoption" behaviour.

My Lasius neoniger colony was founded by adoption.

The queen has died

Not sure if it was due to previous injuries, or due to injuries sustained during aggressive introduction to the colony.

The workers keep moving her around and caring for the body.

Weather forecast for tomorrow is rainy - hopefully I'll catch another one.

Sorry! I hope you find a new one, too.

The queen is now officially a part of the trash heap.

The colony has reverted to its original lifestyle. They took all of the trash to the outworld, and don't stay in the same "room". Introduced another queen, by attaching her aeacus Corinth small nest to their nest. Instant aggression. I quickly detached the nests, and the queen made short work of the two assailants. She seems unhurt, even though there was a half of worker clamped to her underside for a couple of hours.
I will have to wait for winter to kick in before making a second try at it.

I tried to introduce that queen again, and it was a failure. Just a couple of days ago, my friend caught another one. It was in a poor shape when it reached me - one antenna crumpled, the queen lethargic...on her way out. So I said what the heck and introduced her to the workers. There was no instant aggression, but the worker was alerted, turned backwards and did his gaster-pheromone thing towards her. She did the same. It looked like a weird, high alert, dance...both were visibly on their heels. After a while other workers found her and a weird thing is happening. I have observed it in the previous, unsuccessful, adoption trials. Workers seem to drag (or she climbed herself) onto a branch, and keep her pinned down. They keep bobbing their gasters, and the queen does so too occasionally. It is weird because it is clear the queen will die, but they make no attempts to eat her. It has been two days and the queen is still moving, the workers keeping her in place. They obviously responded to her differently than to an insect or an intruder...but they aren't welcoming either. Almost looks like they are milking her of her sweet motherly pheromones, but still not accepting her as their own.
Has anyone observed something similar, or has an explanation for the behaviour? I made a short video, but unsure how to attach it to the post.

Good to see an update, brother! Sorry this new queen didn’t work out.
I’m currently founding two new Crematogaster cerasi queens, plus I ordered a beautiful new Tar Heel Ants formicarium for my huge colony. I’m happy to hear we have lots of similar ants here as in the Old Country.
dobra večer

Wish I had more now. I collected eight, sold two, traded two, and released two. Now I only have two left.

The queen is still alive! Looks like they made peace. She was in a poor shape to begin with, so I'm not sure she'll survive. Still, a partial success!

Also tagged with one or more of these keywords: journal, creamatogaster, scutellaris