but damn this queen is so careless with her eggs..

I see one egg stuck on the glass top an inch away from her nesting spot.

3 stuck on top of her gaster, and 4 forgotten in the middle chamber of the nest

Hey she has an egg! Not sure when she laid it.

Must have been yesterday,

But she still hasn't left the test tube since I opened it up nor eaten anything.

I hope she does go out and drag in that termite I left for her, as they have no social stomach so the brood will need it

An egg a day, keeps the keeper away

She laid another one!

So continuous laying seems to be the go instead of batch laying.

She laid a second egg today

Still hasn't touched the termite, unlike my green Rhytidoponera queen, but she should when the eggs turn into larvae.
Maybe I drop it directly into her chamber...

I pet store bought wood roach feeder setup, which started as small ones, now has 1 winged adult male, and probably a few adult females.
So it's go time for babies

She has been munching on the termite alate nymph I put in her test tube, so she at least won't die from starvation, but now to see if she will lay some eggs...

Eh back down to 15 eggs.... this one has issues getting cotton tangled on her mandibles, and she freaks out trying to get it off, gets stressed and eats her eggs.

Last night I dumped a termite alate nymph directly into her chamber and she did grab it, sting and munch on it a bit. So no need to wait for her to go outside and drag it in

Oh, she laid a third egg last night as well! 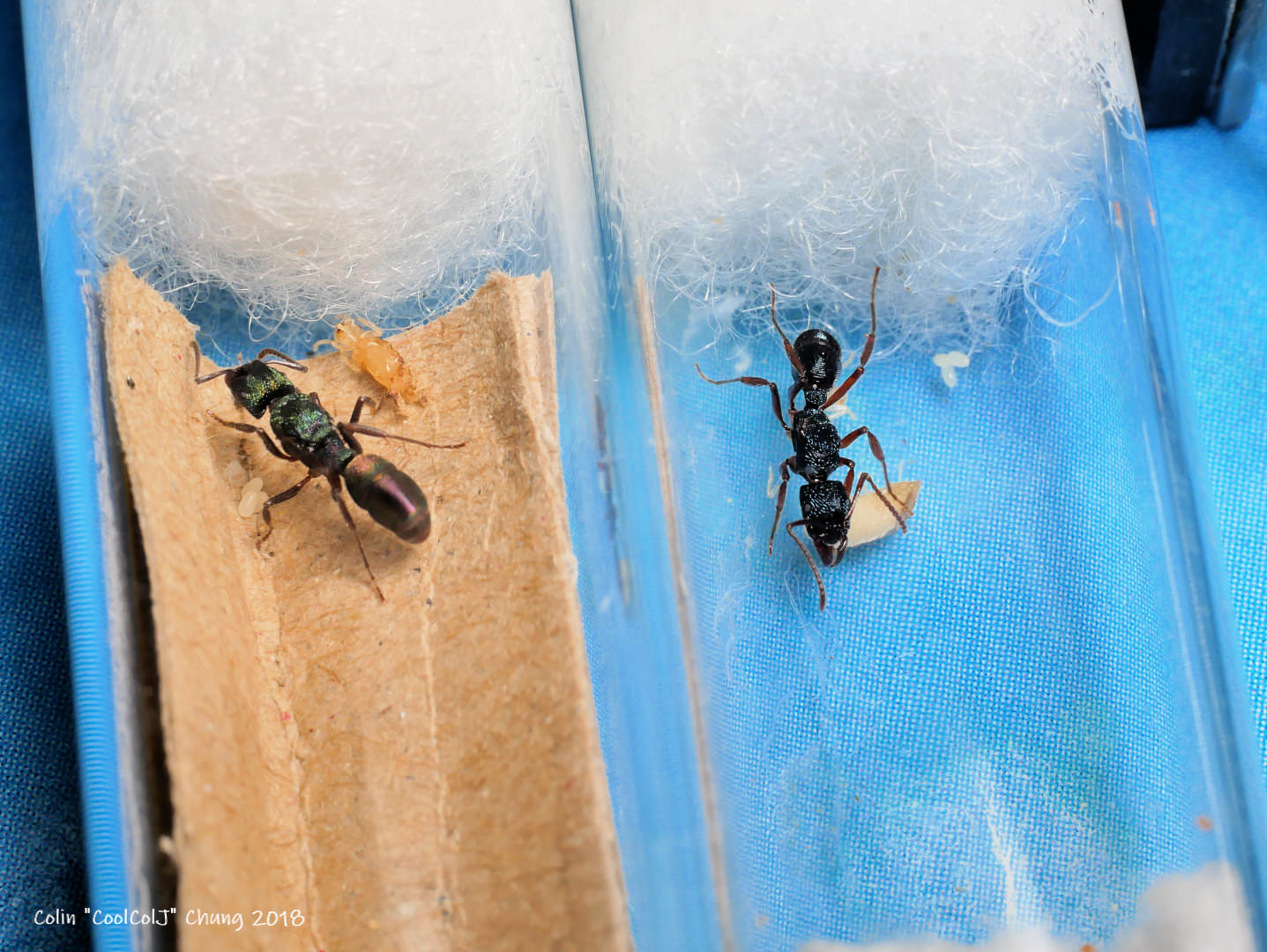 A little comparison between my two Rhytidoponera queens - This one might be an aspera.

The green one is too big to be a R.metallica, but would usually be ID as one, even though there are so many types of green Rhytidoponera... so who knows! 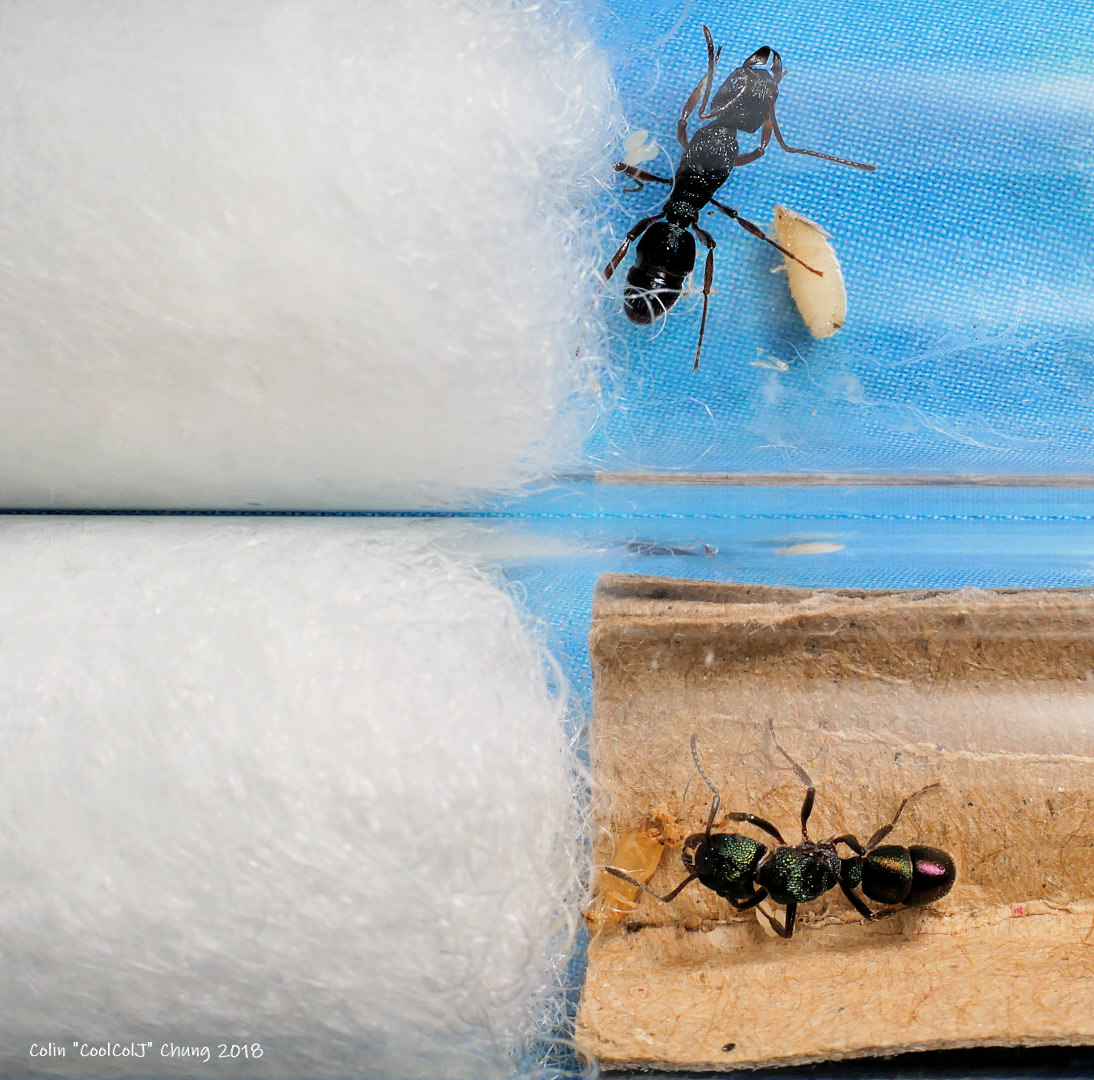 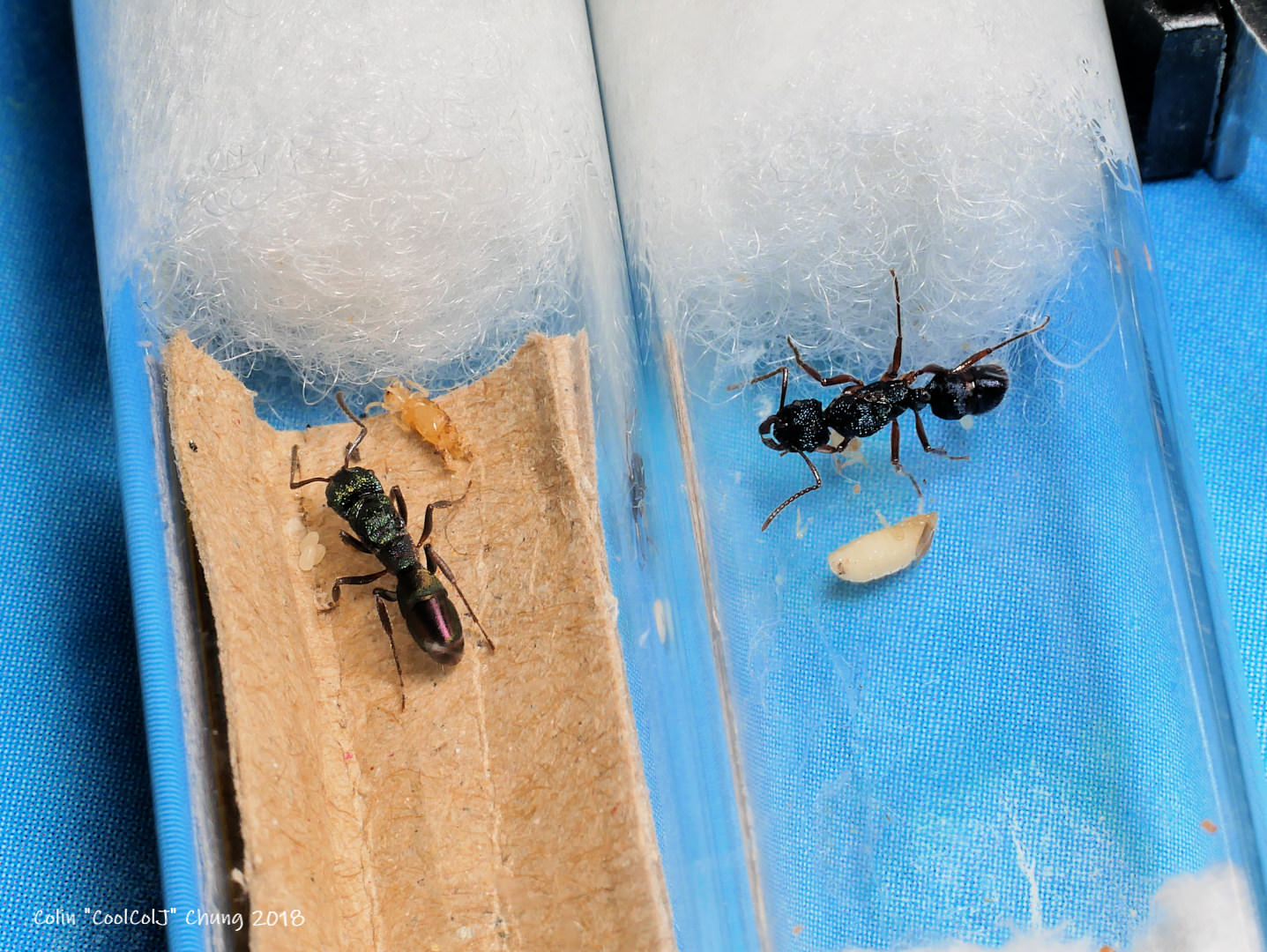 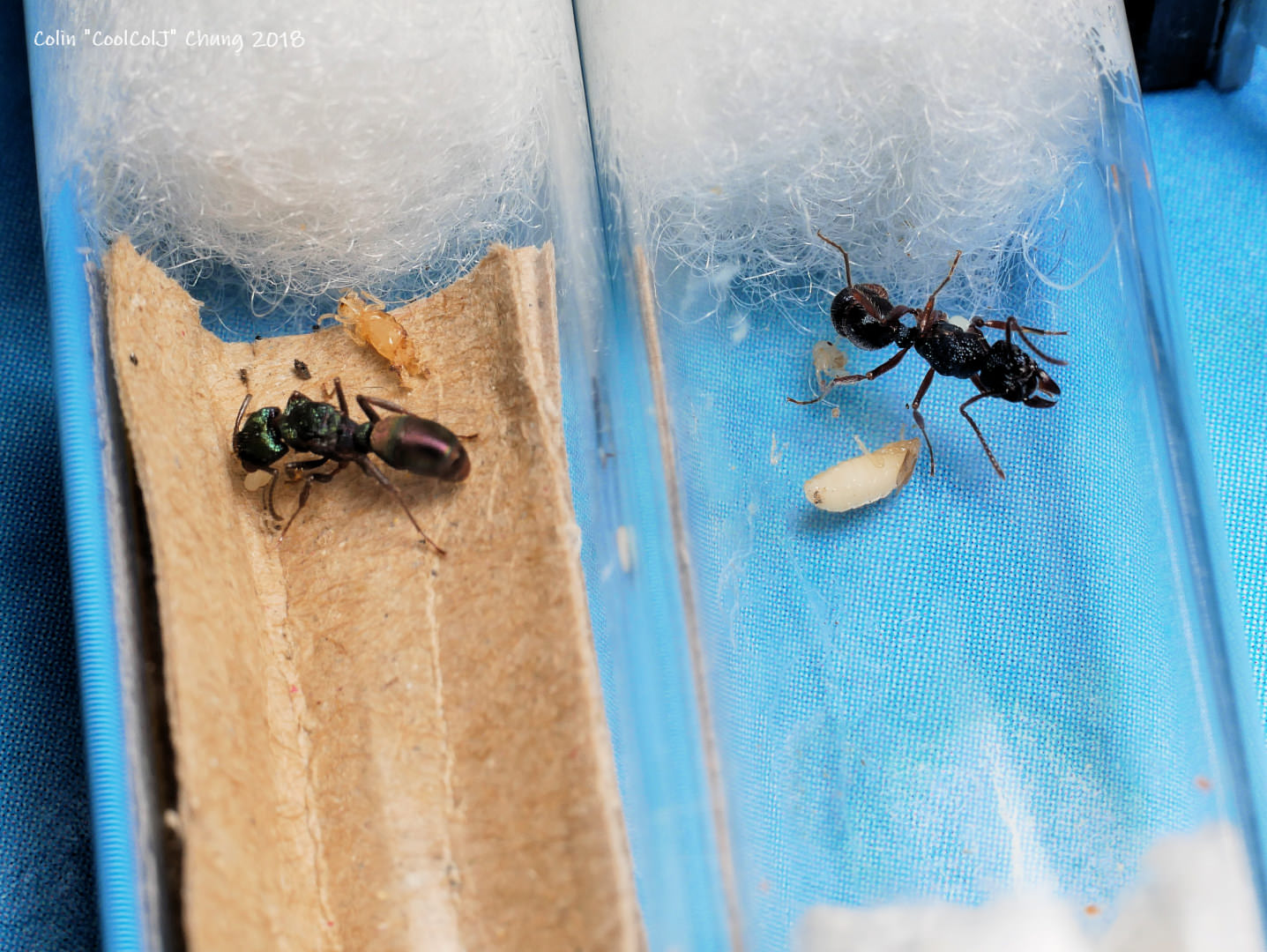 So I ended up running the heatcable along the top of the nest's glass top, placed over the end, directly above the queen.
Holding it down with a heavy metal tape measure
Since running it under the nest seems to cause condensation over the whole glass, while doing the above only in one corner

I didn't check on her till this afternoon.
And she packed bags and moved herself and the brood back to the middle chamber area!
shown in pic - she used to be on the far end of the right side passage. 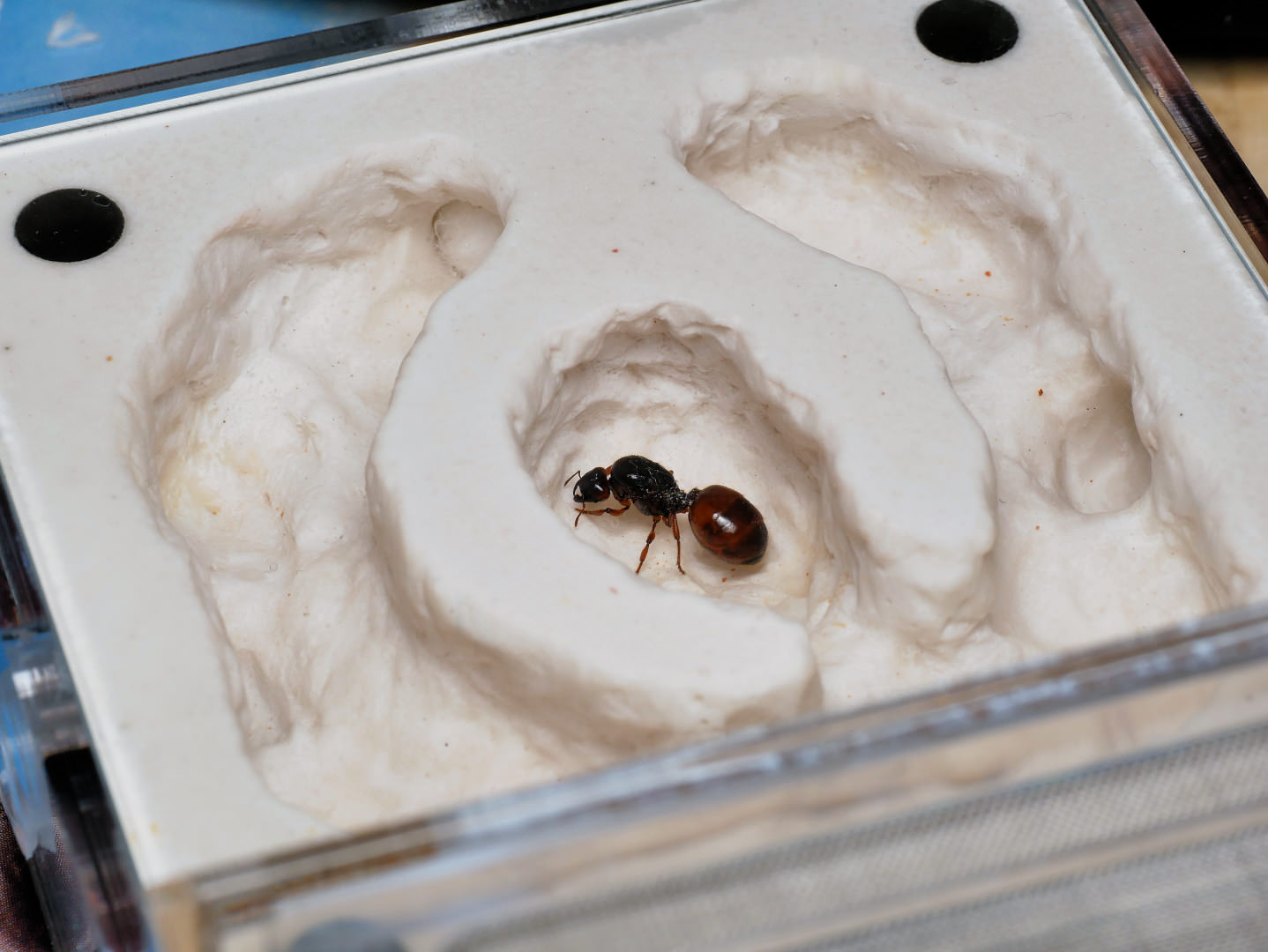 Maybe due to the enclosed walls feeling warmer? Or maybe cooler, if the heat bothered her.
Hopefully by the weekend the brood will have a growth spurt from the heat and become small larvae

She still has a single egg sitting on top of her thorax....

I left the heating cable only on the corner of the nest near her, for the last few days.
Everything seem to be going well, the condensation on one corner had dried out.

But today she once gain abandoned her huge pile of brood in that right side passage, and moved to the centre chamber.
She has 4 eggs there as well, but this is strange?!

I took the heat cable off, and will see if she will move herself back.
There is something bothering her, or attracting her there, but why does she not take her brood with her?!

Wow, so the Pheidole cf antipodum queen actually laid a new batch of brood in the middle chamber of her nest after abandoning the huge ball of 35+ brood on the right side passage where she had been hanging out, until I applied the heat cable!
The new brood ball is at least 60% of the size of the old one!

This one is definitely careless about her brood... I don't even know what to do!

edit - disaster averted, I manually moved the old brood ball to her new position, with some featherweight forceps and small paint brush, that means she has some 60 brood now!

Their first major larvae has finishing pupating. it took about 5 days, so not as slow as I thought, but slower than colony B's 2 days, and Colony C took 3 days.

Crazy, this morning the pupa still looked like a larvae....

This major pupa is over 50% of the queens size, so it should be the largest one yet.

Lots of recent worker eclosures, and more to come with lots of brown pupa.

Some flights today , 11am by the looks of it, I found a unknown winged queen, bent antenna, means queen for sure, and what looks like Rhytidoponera queen wandering around in my backyard when I went to throw some rubbish

Pretty quiet in the bush, much cooler in the shade, but I turned over a rock that revealed a termite nest with more advanced alate nymphs, with brown wings already, so these termites may fly within a month or so.
There was a Polyrhachis ammon nest right next to them, under the rock, which probably had no idea they were next to termites.
Some of them scrambled and grabbed a few termites, while others moved their cocoons into a small hole

I captured another batch of termites from here, some brown wing alate nymphs, workers and guards.
Hopefully I can get some mature alates out of these and get my own tandem pairing king and queen action happening

Possibly a Nylanderia sp. queen i captured todaywhich may not ahve mated as I saw a tiny male 1m away.... 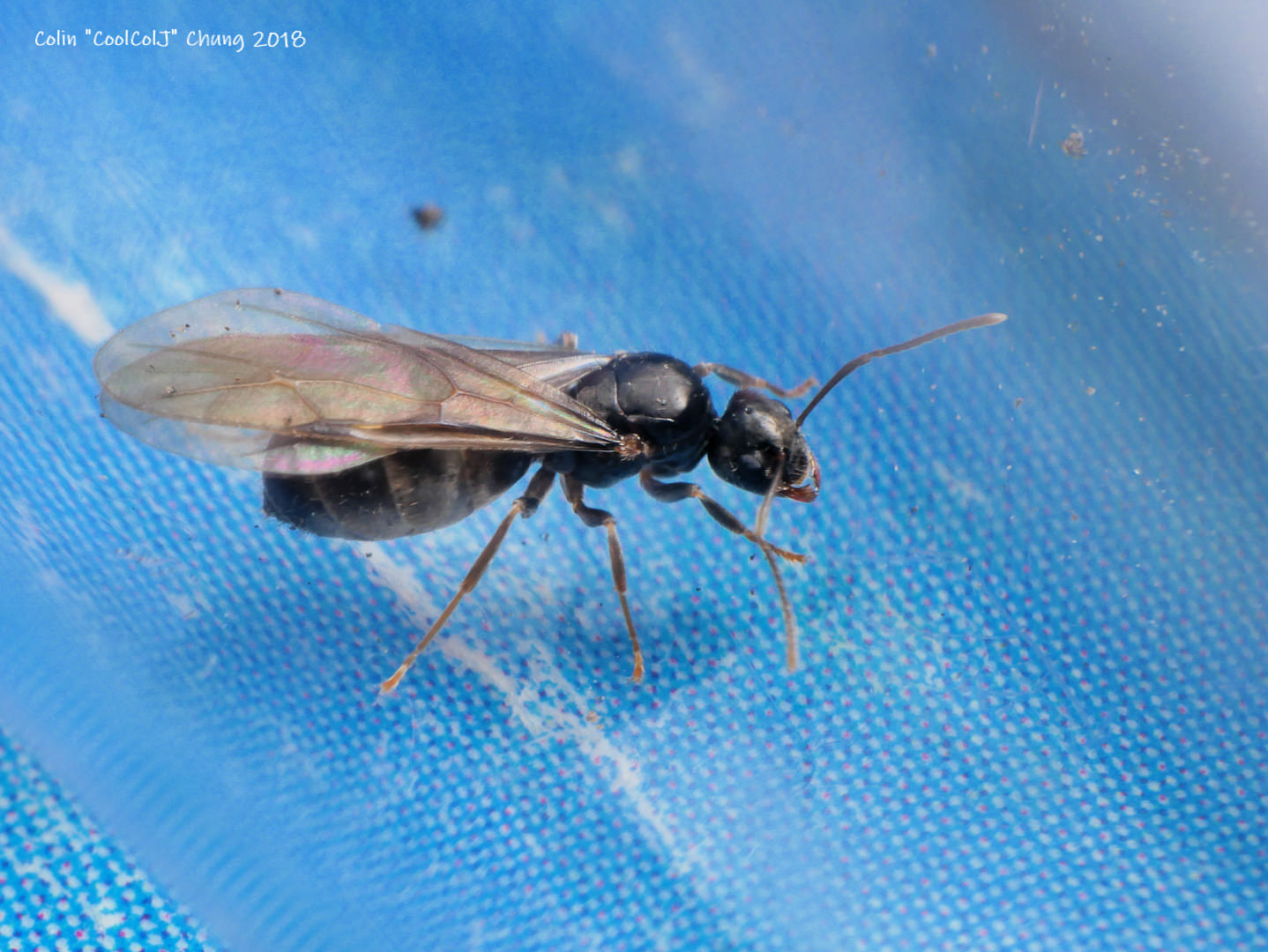 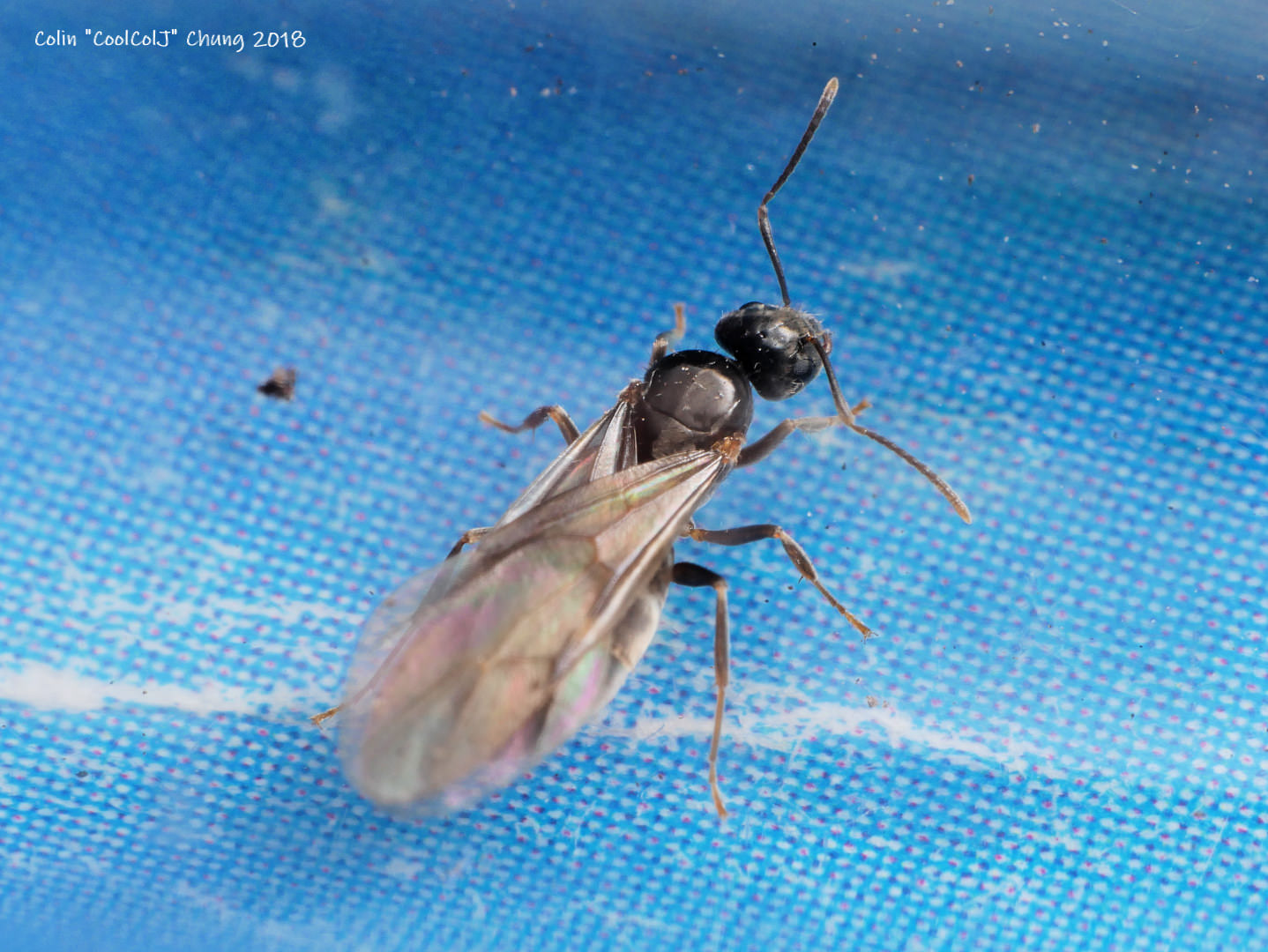 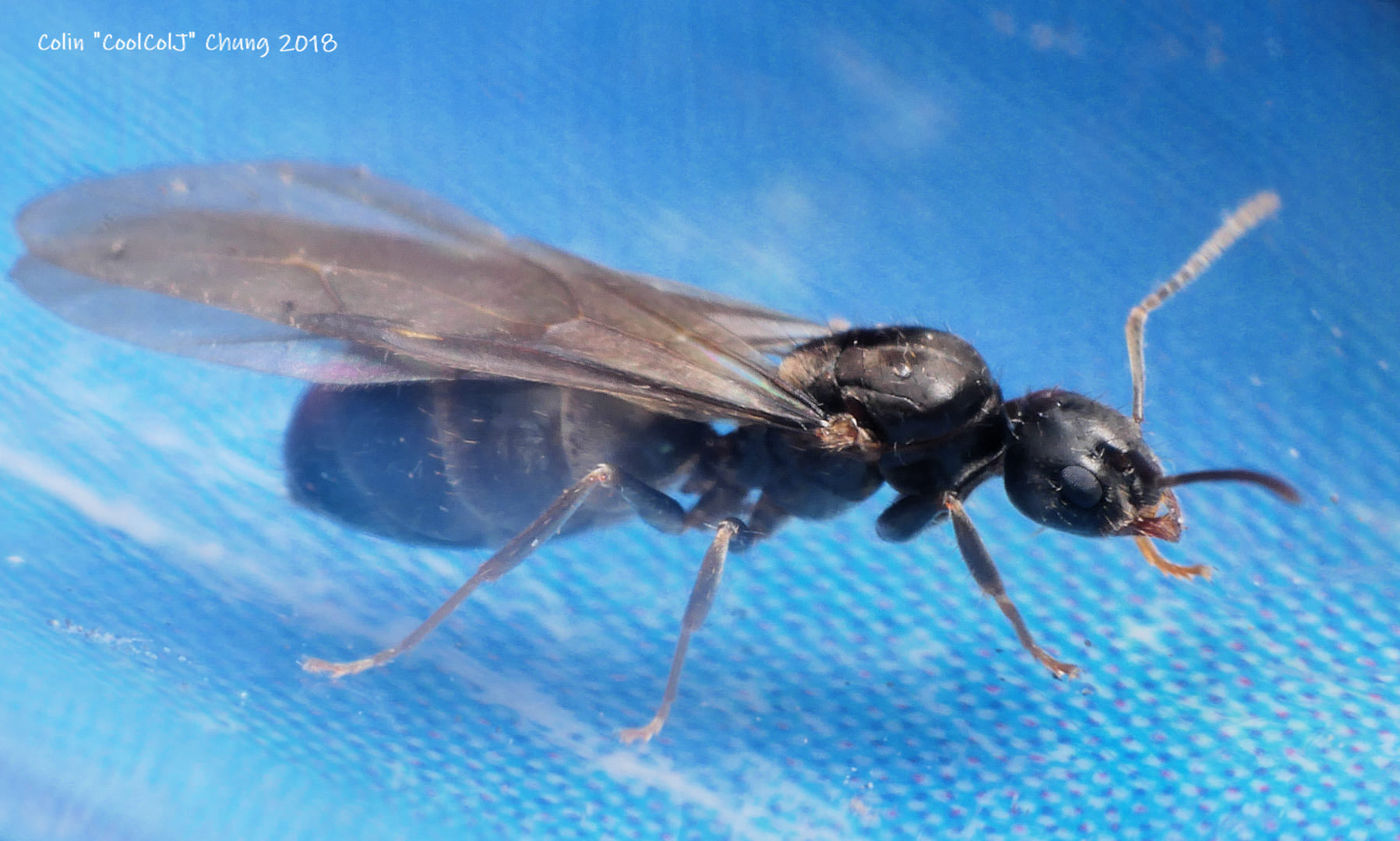 7-8 mm Rhytidoponera queen I found wandering in my backyard today.
I've never seen these in my yard so it has to be from my neighbour

Although I have seen workers of a smaller species, for the first time, this week in my yard.... 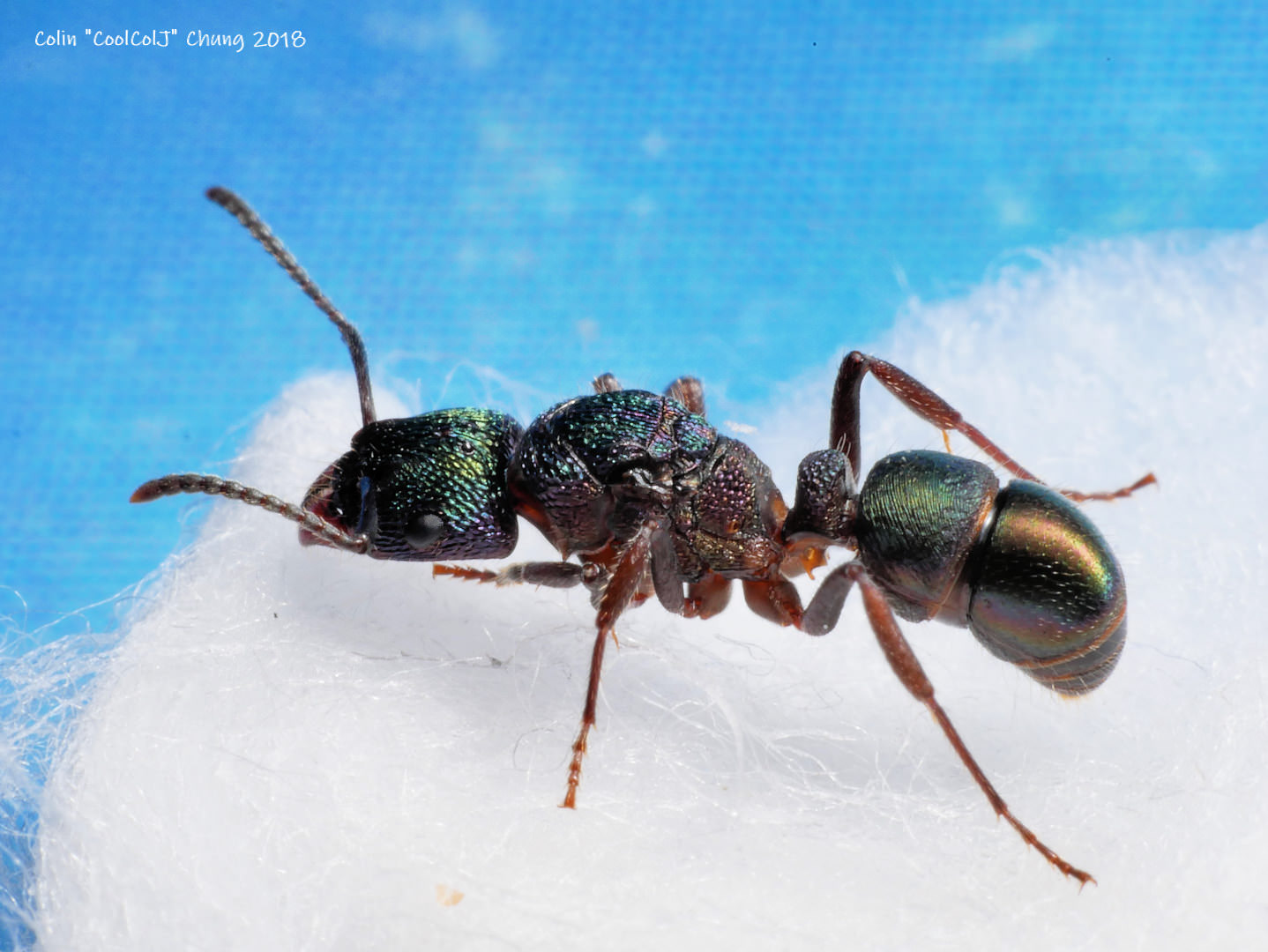 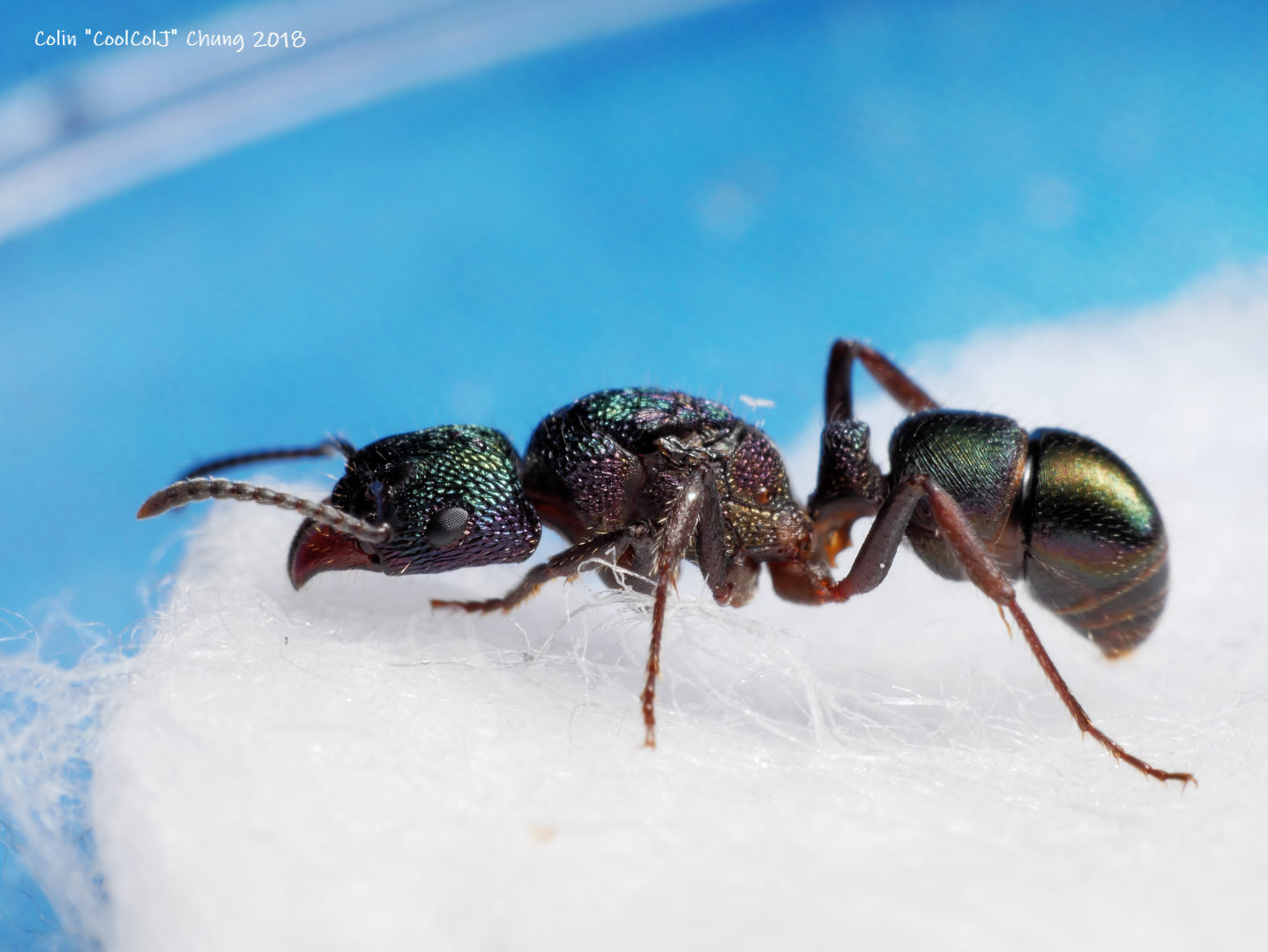 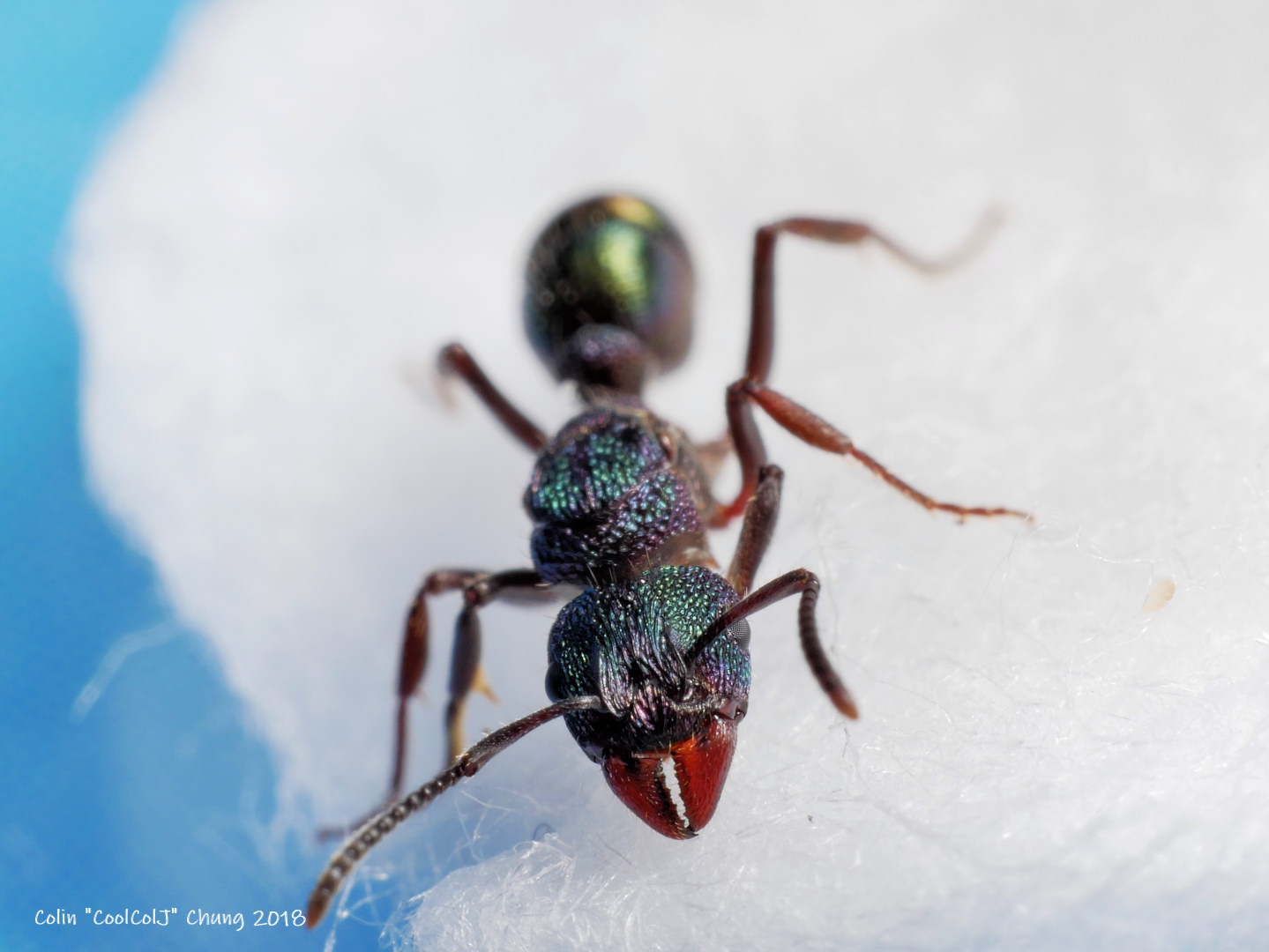 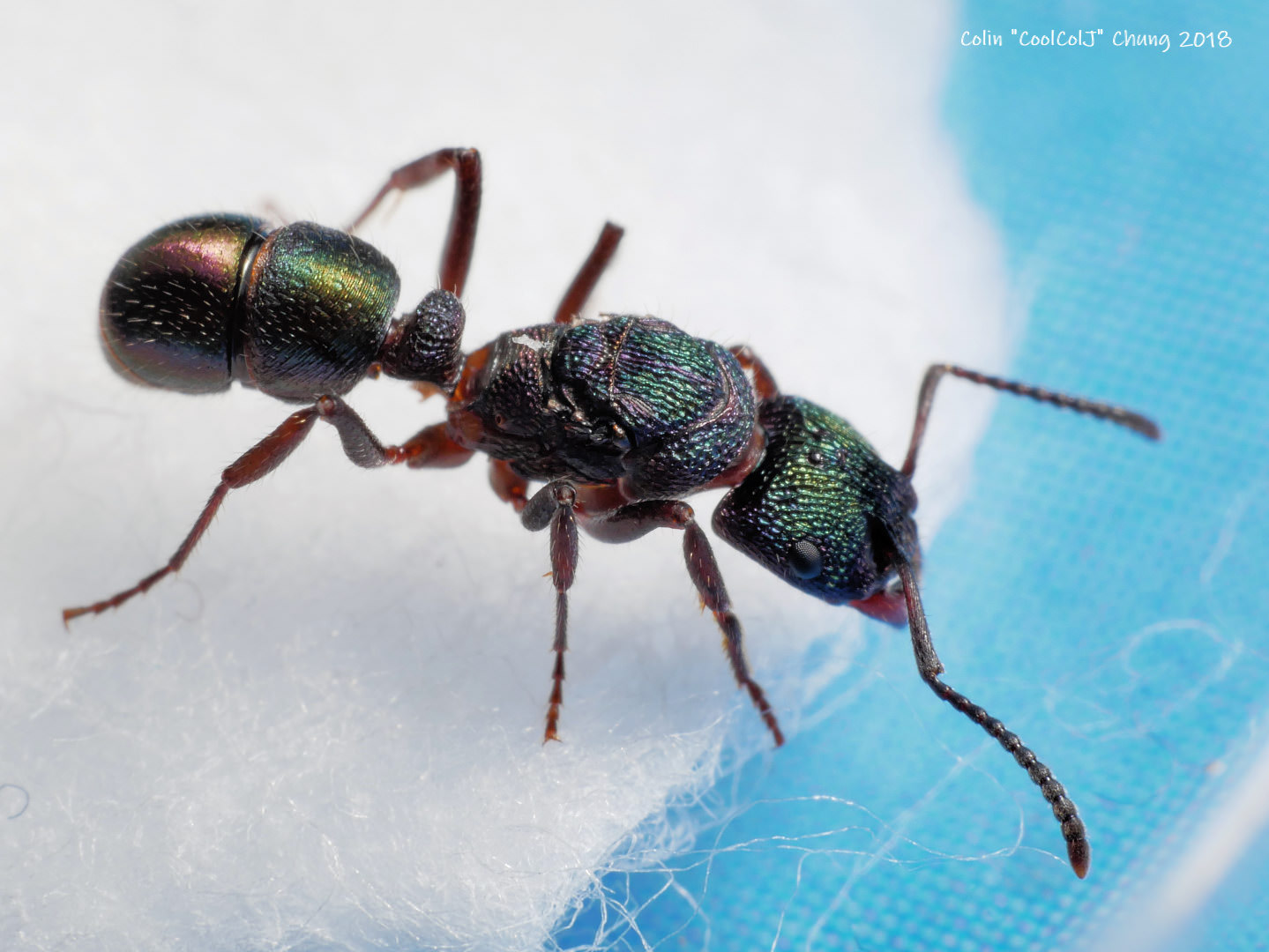 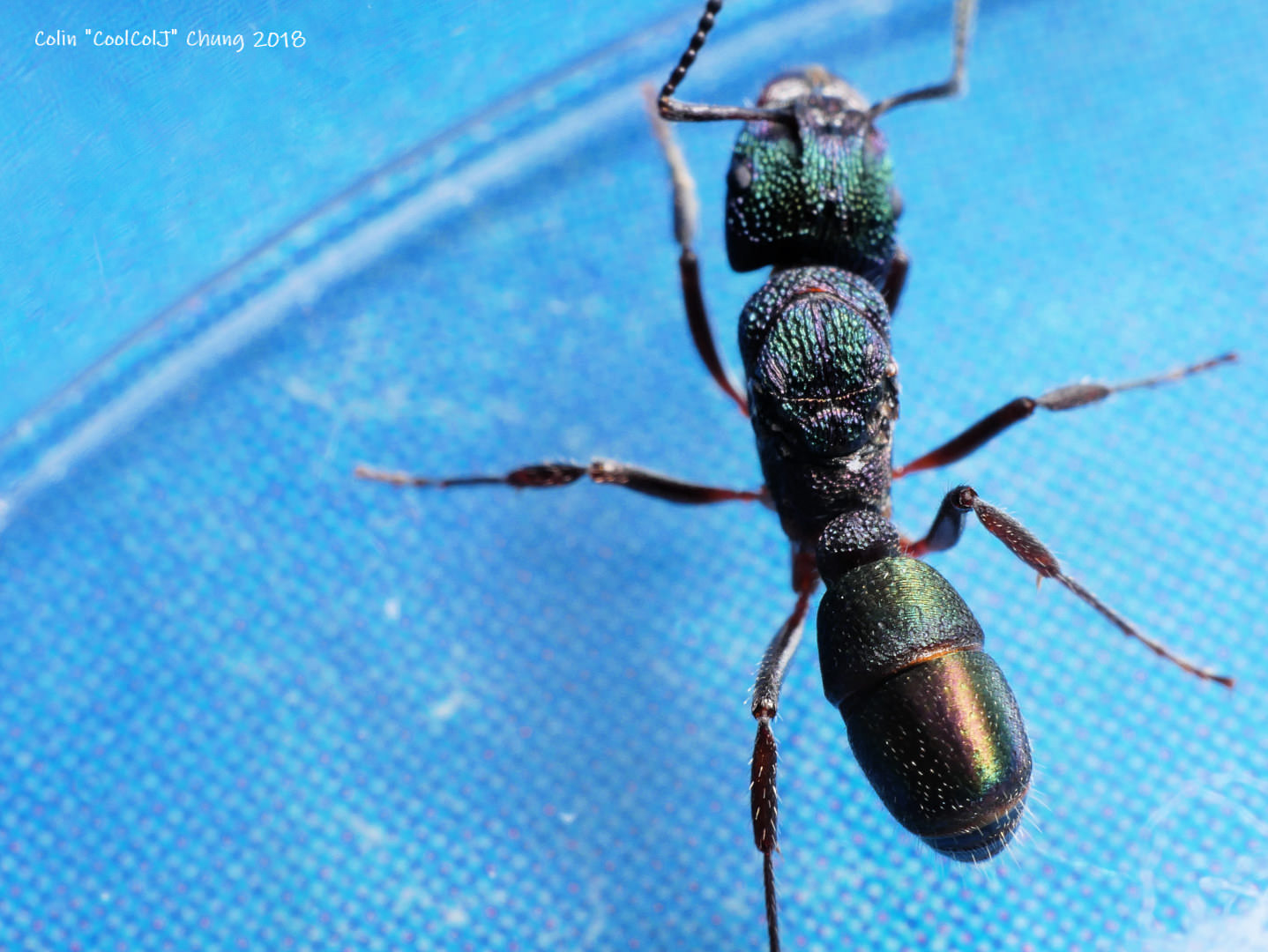 Released my 8.5mm Iridomyrmex queen colony.
With all then incoming queens, it was time to cull of any colonies I don't intend to keep long term.
Once I sell off a few Pheidole colonies, when they get their majors, that should trim things down a lot as well

Second major pupa is starting to go brown, and should eclose in a 1-2 weeks time.
Fastest developing majors of all my Pheidole species colonies, and already going into a second one, while the others are still pupating their first.
This one looks larger than the first major! Need to confirm.

Finallly get a good look at the first major pupa, since they have spread the brood pile out.
Looks to be the smallest major pupa of the 3 most advanced Pheidole colonies.
Makes sense, as the queens are smaller than the other two.


Sold my black Rhytidoponera sp colony 4 workers and brood. So no more updates on that one, but the queen did lay 2 eggs the last 2 days!

ARgghhhh, she ate another 7 eggs, WTF is wrong with her,

Fed her a termite, just in case she is just after something to eat... well she certainly attacked it good!

7-8 mm Rhytidoponera queen I found wandering in my backyard today.
I've never seen these in my yard so it has to be from my neighbour

Although I have seen workers of a smaller species, for the first time, this week in my yard....

Found another in exactly the same spot today

The forced feeding of a termite seems to have done the trick, I see 5 eggs now. 2 more than yesterday!
That's quite a lot for a semi-claustral queen's first batch.

Must have laid a couple of hours ago, as earlier I did not see an egg
Just watched her lay her second egg over a couple of mins, a long birth

For some reason, she put both her eggs on the poop stain...

Hooray she laid a second egg, sometime this week!

Clever girl - she somehow managed to move a bit of honey from the front of the test tube, in the feeding dish, and place it next to her eggs on the cardboard!

She laid an egg overnight.

Didn't expect it as she was by far the most unsettled of 3 green queens I caught recently.

That cardboard substrate helps I think

Worker number 8 eclosed! Must have been yesterday.

That snuck up on me!

That took 2 months, with some distant heat cable on the outside of the outworld, that the nest sits inside, to eclose after the cocoon was spun.

I noticed a nice stack of eggs, but will need to take a macro pic to see how many

Ha I think I might have made a Rhytidoponera aspera gamergate or two... maybe more!

I saw a green tinted R.aspera grooming herself in my backyard, near the fence, so likely from my neighbour. I captured to take a closer look, 10 seconds later I saw a drone, so I also captured him and dumped him into the same container.
Without any notice he jumped on her gaster and did the dirty deed

Only it lasted only 10 secs? Then he hopped off. I expected him to die, but he didn't so maybe it wasn't fully done?

I captured a second worker a minute later and also placed her in the same container, this ones looks smaller, and he also tried to mount her.
And then attempted to mount the larger one again

Captured 4 more workers wandering around, so I could have a 6 worker gamergate colony

Quite a size variance between the 6 workers

LOL he's still alive and is trying to mount the other 4!
Sharing the honey with the others, and a worker has been grooming him... 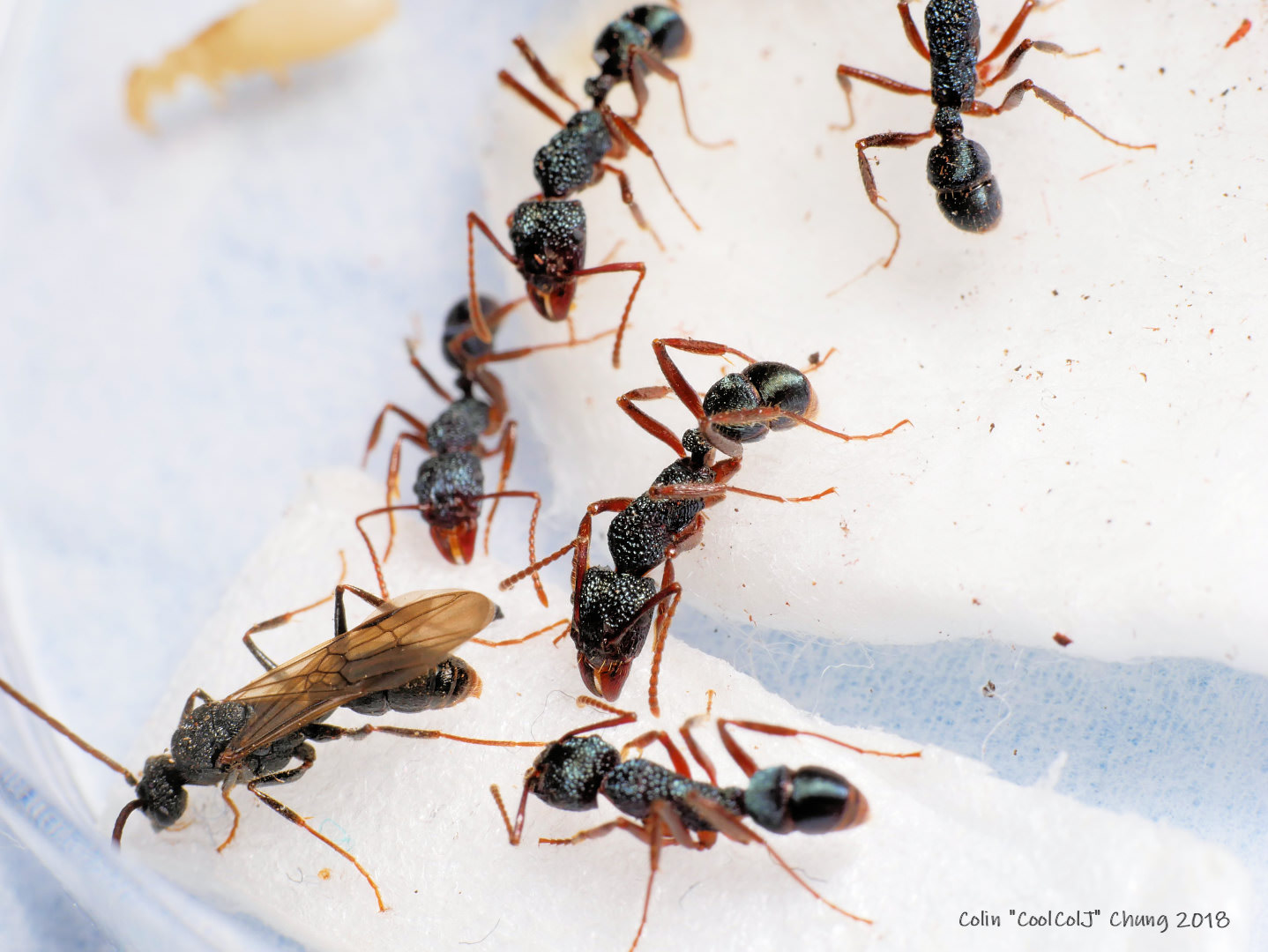 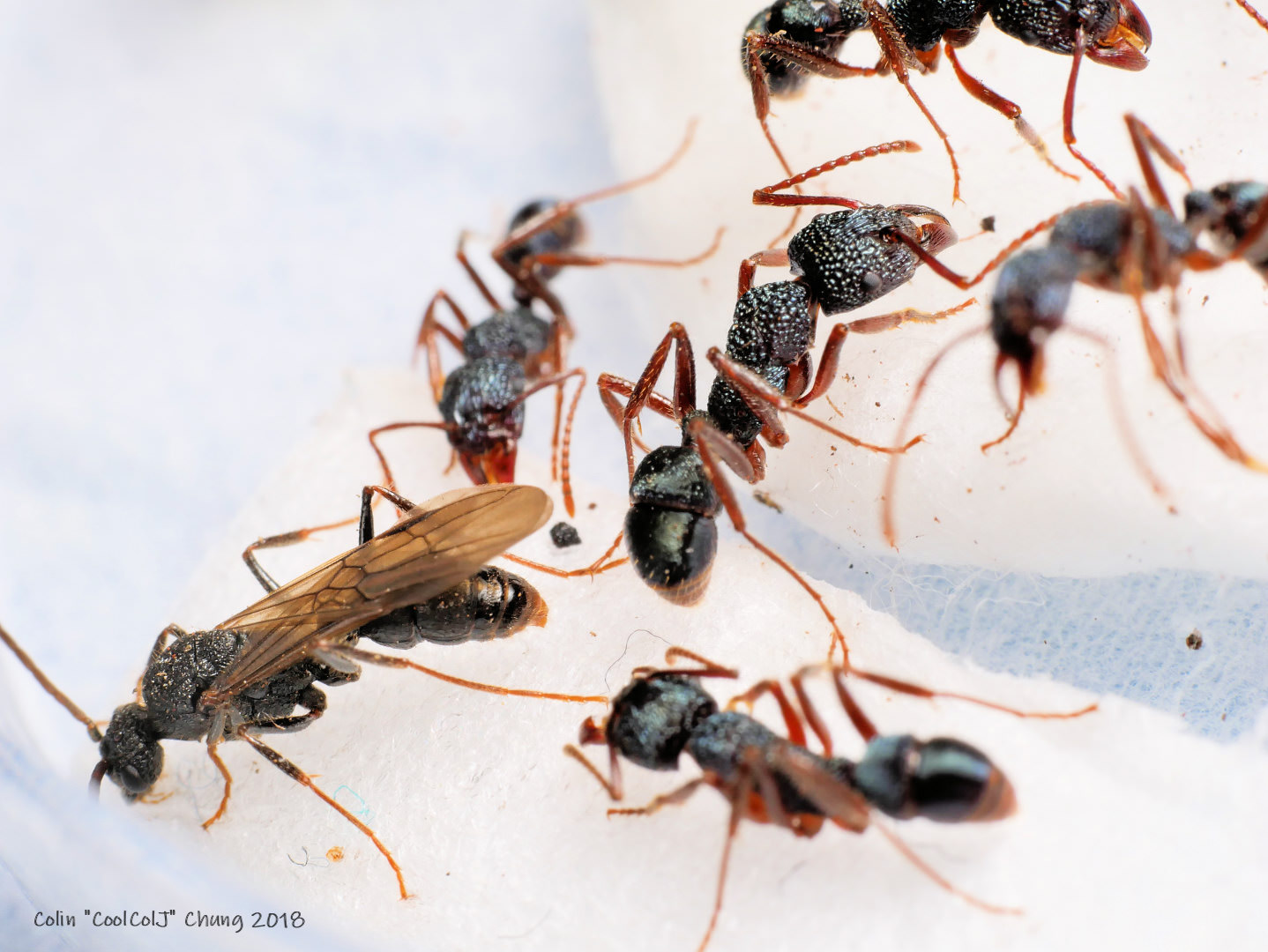 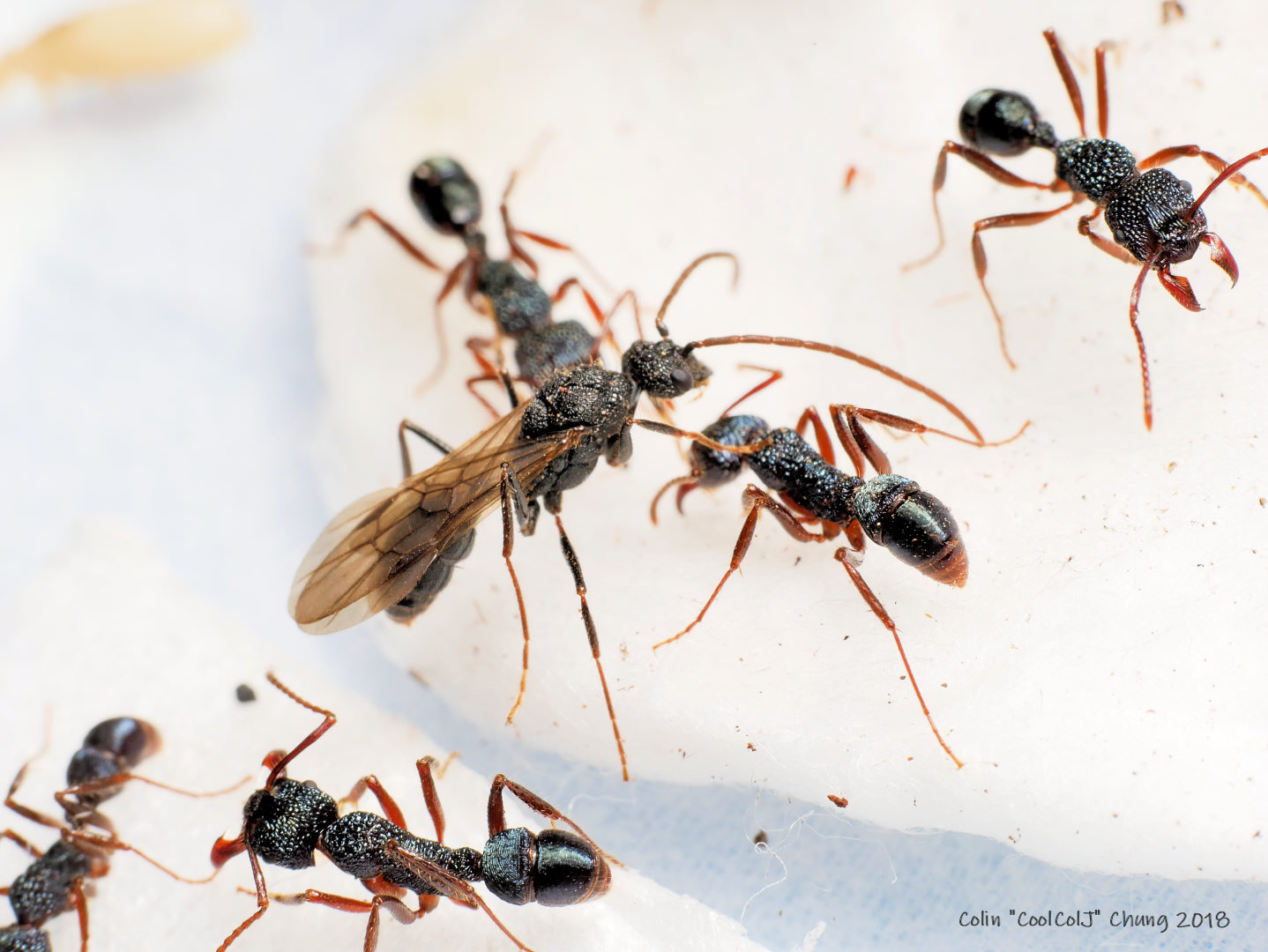 I wish I could get a look at the winged R. metallica that was with my colony, I didn't get to check the antenna, your drone seems to have a plump gaster, perhaps I was mistaken. I would be interested to see how long the drone lives when left in the nest.