40 replies to this topic

This was the first Desert Tarantula (Aphonopelma iodius) I found, but it died last year. This was a mature male, so it supposedly shouldn't have lived very long. The females can live for a very long time after they're mature. 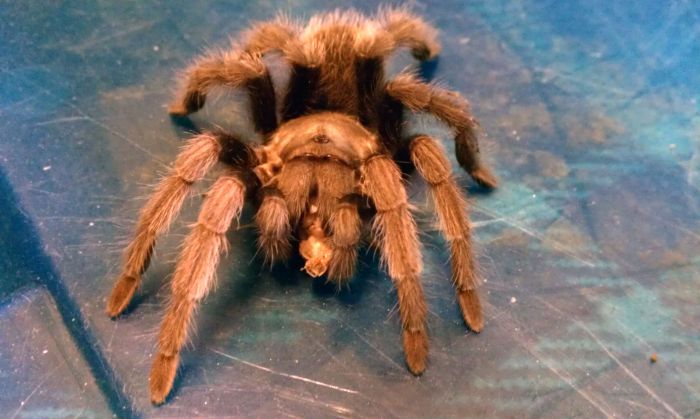 I found a young female one last summer and still have her now. I dug her out of a small burrow in the ground near Joshua Tree National Park. I quickly threw together an aquarium for her with some potting soil. I made her a nice little burrow with a rounded piece of bark, but she just dug a hole under it and made a big burrow of her own all the way down on the bottom of the tank. Supposedly these things can dig some pretty deep burrows. I'm still wondering how they can dig these holes in the rock hard dirt. She did a good job digging her hole in this container, even though I never actually saw her doing any digging. This was potting soil though, so it was pretty soft.

I made her a new container with dirt I actually got from the desert where I found her. I wet it all down, so it should dry hard like the desert floor. I started a little hole for her in hopes that she'll decide to make that her home and dig her burrow there. Here's she is eating a Katydid in her old potting soil container.

Well that was pretty cool. Has it grown much? It's hard to tell

A little. It molted once.

Thanks. And you are right. She is Aphonopelma iodius. I don't know how I came to the conclusion that she was A. chalcodes. Do you know if they actually dig the deep burrows in the really hard dirt, or are just claiming it from some rodent? I was hoping she would dig one in this new enclosure I made for her.

They definitely dig their burrows themselves, but I think they do it while they're young and then expand it. I haven't seen any wild-collected adults dig their own burrows.

Ah, thanks for the info. The first container I had this tarantula in had potting soil in it, and she dug a pretty deep burrow. That was really soft dirt though, so maybe I'll have to get this one started myself.

What you could do is wet the dirt down until it's soft, and keep a lamp over the enclosure until the tarantula digs a burrow and the enclosure dries.

That's exactly what I've done. It was mud when I put it in, but it's getting drier every day. Any idea how they dig? Do they use their fangs? That's what I can't figure out.

Yup, fangs.  Those fangs are extremely hard, they can dig into the hardest clay if they want.

Well she finally dug her nest. She dug right into the hole that I got started for her. I just placed a water bowl over it so she would hide right where it was and hopefully decide to move in. It took almost three weeks for her to finally do this. I even caught her digging on video.

It looks like she just doubled the size of her burrow judging by the size of the dirt mound I just found outside her hole when I got home from work yesterday.

Wow, you have so many cool pets you can find in the wild in California.

It would be awesome if there were tarantulas in BC.

It contains a lot of information about ants, guides, videos, links, and more!

If you have any feedback, please post here or PM me, don't be shy!

On May 12th the tarantula finally came out of her burro after being in there for about four months. She's been coming out every night since then. She seems very healthy and is eating well. I can see she also molted.

Just the other day she decided to dig her burro even larger, because there is now a giant pile of dirt next to the entrance, along with her old skin. 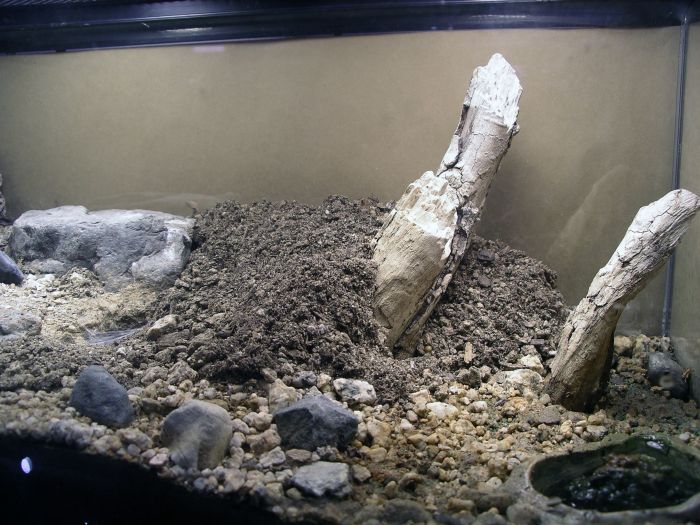 A little more than a month ago she went in her burro and closed it off with dirt, but came back out just the other day. I can see she molted while in there. I can also tell how much bigger she has gotten over the last year.

The tarantula is still alive and well. She's dug her burro almost all the way around the bottom of the tank by now. I caught a male a few weeks ago near Desert Center and tried mating them, but I don't think it was successful. I think the male might still be too young. I'll keep him and continue trying.

I'll see if I can get some pictures later.

wow, that is a long lived tarantula! I didn't realize they could live so long.

Back to Off-Topic Journals