63 replies to this topic

Since I'm not sure when or if the termitat will be available again, Zootermopsis angusticollis can be ordered here:

If you are interested in making your own. Mine arrived today in good condition, going to wait and see if any eggs show up.

I'm pretty sure any of the nymphs can be reproductives if needed, and read one site that said they sometimes all fight for dominance and kill the actual queen. Which I've seen said for subterranean termites as well, where the reproductives take over (by killing the queen) and produce an even better colony (which is funny that a colony does better with reproductives than the actual queen lol).

Some ants (like Harpegnathos) actually do something similar, with their very short-lived queens and the gamergates taking over (and fighting for reproduction rights in ritualized jousting duels) after the queen died.

I'm honestly not sure. They included two larger golden brown ones that look like
Neotenics, but no soldiers. Some with wing buds too and some small nymphs. Just going to wait and see what happens.

The main reason I got them was just to see if I get any egg production and if it's possible to get a colony from just workers since I'm still not really sure based on what I've read.

Well so already some eggs in my mock termitat,just FYI.

Yeah sure. Nothing fancy, just made it out of some half inch wood Dowling and two small plexiglass plates. More eggs this am, probably around ten now. I'll still buy a termitat if they ever come back since my version isn't exactly pretty lol.

This is an awesome journal!!! we need more termite journals like this. I personally just started rearing my four Reticulitermes flavipes colonies a few weeks ago and they are doing great.

Nice termites, but where's the queen? I've always wanted to see one of those...

Termitat is back. Got mine in today, I'm very pleased with it although it is a little smaller than I thought.

The termites that came with it are a lot healthier looking than the ones I got from wards too.

Will do! Reading through the literature he talks about it take about a month for supplementary reproductives to appear, so it seems like a good way to have a long lasting colony.

Well, hopefully all this information doesn't hijack the journal thread. Maybe this could be split off if the creator of the journal doesn't want his thread taken over by termite facts lol.

It doesn't say much, but does list what "forms" the Zootermopsis angusticollis have.

Notice unlike the bugguide posted earlier and again below this, that above site says NOTHING about workers. Or the mythical fantasy of reproductive soldiers that makes no sense, except in a fantasy book or a disney kid movie about insects.

Of course, that isn't to say all the nymphs could become reproductives. But again, I'm almost positive that is the case. The downside is, there is so little information out there on termites, and especially these Pacific Dampwood termites (which is surprising because they are so big, so would think they'd get more attention. Especially because they are supposedly rather common up north) that its hard to find more concrete info. But, what is a fact is that bugguide page is a bunch of BS that is best to be ignored and not mentioned again lol.

So since the forestry page looks to be an actual legit website and its actually a public university, I'll take it as fact since its from, well, an actual university. I figure they'd get things right. So, even though not much actual info on the first link. It at least clarifies (which is what I've read elsewhere as well) there is no workers, only winged reproductives, nymphs and soldiers. From what I could gather, nymphs turn into reproductives as they get older, but act as "workers" when young.

Its kinda sad though that so little information exists on termites. Even a common one that is so large, barely any information at all. And there are so many termites that do really interesting and unique things. Many which ants evolved to do as well, so they evolved pretty much the same. The fungus growing termites, the plant/seed harvesting termites, termites that do I guess raiding (at least with huge thick marauding looking trails). Lots of stuff, like ants do. Its interesting how they evolved almost the same way (or at least do the same kind of things), even though they aren't even related. Yet seems termites are very understudied, even for common termites.

I've learned from recent experience that termite colonies will produce secondary reproductives and alate nymphs when the queen/king disappear. The nymphs molt into the new reproductives. The alates can be used to start new colonies if you wish to experience termite founding (it's pretty cool).

These are really suspicious. Every time I ask or anyone else brings it up (not just this thread, but there was another one and it was asked a lot), on how to replace the wood or expand it or anything once the wood runs out...EVERYONE completely ignores the person who says it or asks.

That tells me there is no way to replace the wood and its a one use (expensive) toy prop.

That is really cruel to the termites inside...so they'll starve to death...that is great.

This is late, but actually the termitat is really easy to open. If you don't really want to send the termitat back for a refill, you can make a new setup with damp cardboard and transplant the colony into it.

Colonies I currently own:

Hello Guys. So I've had the termitat for just over a year now and they are all doing great. Its been the easiest thing to care for only needing about 5ml's of water every week or so. When I first got it the colony only consisted of a hand full of workers and maybe two soldiers. Now the colony is much larger with lots of soldiers and tons of adult workers and numerous juveniles. The juveniles seem to come in waves every month or so.

Soon within the next month I'm going to try and rehouse them into a larger version of the Termitat that I'm designing. It's basicly just going to be a jumbo version. With a 15" diameter slab of Douglas Fir instead of the 7.5" slab that they're living in now.

So here are a couple of pictures.

This is what I refer to as the front side. 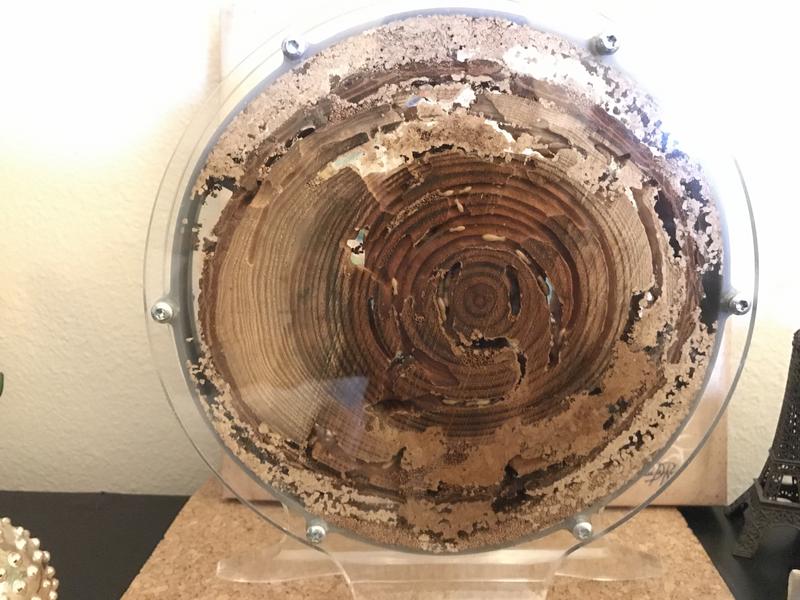 And this is the backside. 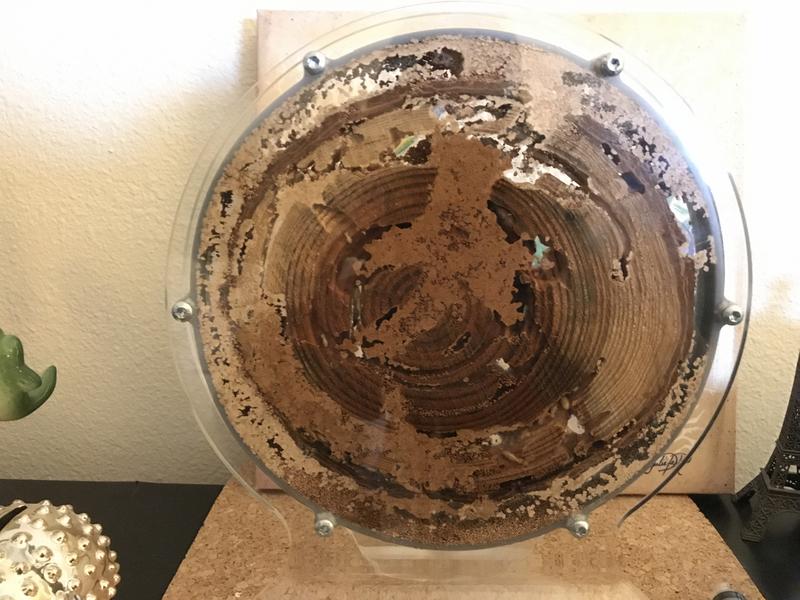 Also here is a short 6 minute video I just took.

So for those members that might remember me, I hope everything has been going well with you and your colonies.

Edit: forgot to mention the species. These are Zootermopsis angusticolis, AKA damp wood termites.

I had made another thread updating my termitat one year on but I forgot that I had this journal. So if a mod or admin wants to delete the original in the termite keeping forum that would be fine. Thanks.

0% chance of escape. And if you opened it up and they did get free they would die. these termites are not good at being pests. They would desiccate fairly quick in a normal home setting.

I wrote a guide, it's linked in the tab below, but I'd be really happy to help get you started. I recommend reading journals, and if you have any questions afterwards, feel free to ask.