21 replies to this topic

I dug out a mature female Anuroctonus pococki scorpion last week from its burrow in the embankment on the side of a trail. Now that I know more about this species of scorpion, I built a nice little setup that it should feel most at home in. 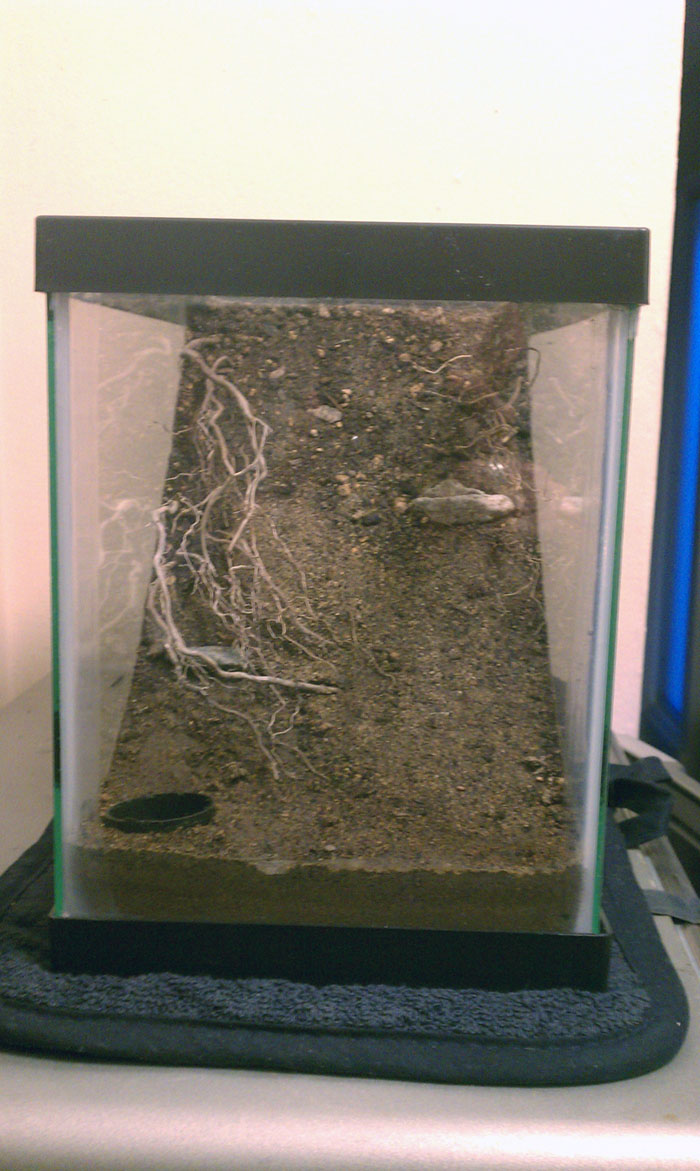 This should allow her to dig her burrow into the side of an embankment like they are used to doing. Hopefully if I keep it dark in the back, she might dig right up against the glass allowing me to view her while in her nest.

I put the scorpion in her new cage last night and started a small burrow for her. Right away she took over on the digging. 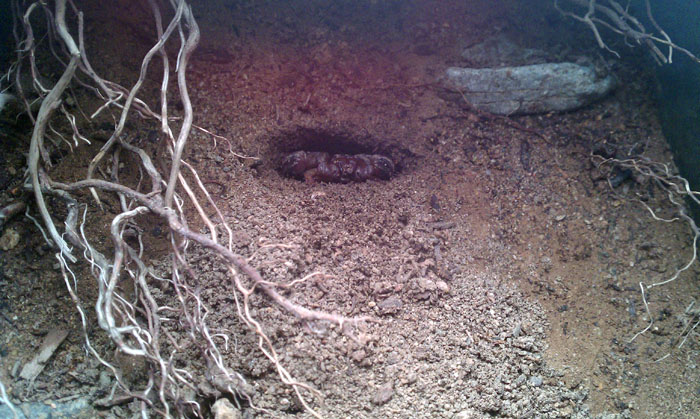 Scorpions!?!? You're making me feel my pets are lame. Do you know if there are any safe scorpions I can keep in Vancouver?

It contains a lot of information about ants, guides, videos, links, and more!

If you have any feedback, please post here or PM me, don't be shy!

I can't remember the by laws for Vancouver, but I'm pretty sure most arachnids are not allowed, at least they were in Abbotsford when I lived there. That being said, I know many people who kept them anyways and many pet stores in the lower mainland still sell them. It's not very strictly enforced, but it is a bylaw and so they could enforce it if they chose and make you get rid of any pet arachnids you may have.

But, enough about that, the best choice for someone with no experience with scorpions would be something like an Emperor Scorpion, or a Flat Rock Scorpion. Both of these species get quite large and are not very venomous, and in most cases would most likely pinch you rather than sting you. If you are interested in getting scorpions I would recommend www.tarantulacanada.ca or www.arachnophiliacs.com . If you are interested in getting information on scorpions a good forum is www.arachnoboards.com .

I think there's only a few scorpions that are very dangerous, most will just inflict a lot of pain. I know around my part of the US I think the only really dangerous one is the Bark Scorpion; that one can kill you.

What do you feed that thing? What's that orange stuff in the dish?

I feed them crickets. The orange stuff is a sea sponge, it makes it easy for critters to drink without drowning.

Cool stuff. How did you capture her? I'd be so afraid of getting stung.

Just corralled her into a container with the lid.

She has dug her borrow about five or more inches deep by now. There's getting to be a pretty large pile of dirt outside the hole. She doesn't come out very often while doing her digging, but I did manage to catch her once on video.


This is how they like to sit at night waiting for dinner to come walking by. It looks like she has dug her burrow as deep as it's gonna get. Just corralled her into a container with the lid.

Or use your hands. These scorpions aren't prone to sting, although they make an impressive threat display.  Even a sting is not very painful, ants would hurt more (speaking from experience here).

Or use your hands. These scorpions aren't prone to sting, although they make an impressive threat display.  Even a sting is not very painful, ants would hurt more (speaking from experience here).

Wow. I always thought it would be a horribly painful sting.

Wow. I always thought it would be a horribly painful sting.

Of the scorpions commonly found here in Orange County, A. pococki has the least painful.  The other scorpions found here are more painful, but overall it's equivalent to a bee sting. Nothing deadly here, thankfully.

Crickets are not the best feeders. Crickets are known to bite molting inverts and shedding herps if they are hungry enough. Nice setup. Best put an obstacle in the middle so the scorpion will have to burrow against the glass. Your scorp has dug against the glass, but best put something in the sand. Plus, the scorpion, like Hairy Desert Scorpions, will probably drag food inside the burrow, so you might want to put in a blue feigning death beetles inside. You can get those from Bugsincyberspace to act as janitors. They make a sound that deters the scorpion, or they can play dead. Emperors are good starter scorpions, but the "red claw" emperors are not. They are very aggressive different species! Never buy the tiny yellow scorpions form the Mid East or Northern Africa. You might be buying a Death Stalker or a Fat Tail! Very dangerous. Best of the luck!

This scorpion must have been old. It started falling apart. It's stinger broke completely off at one point. I finally hadn't seen it come out of its burro in a few weeks, so I checked to see if it was still alive, and it wasn't. It finally died. I might get another one, or I might just use its tank for my new scorpion--Hadrurus arizonensis (https://www.formicul...rus-arizonensis).

So how did you make that setup? You packed damp clayey soil into shape, tilted the tank, and dried it with a fan?

I just poured the wet mud into the tank while it sits at an angle and waited for it to harden.