46 replies to this topic

Hooray the epic guilt of occasionally shining bright flashlights and lightly tapping their tube can finally end, they moved! And shockingly it wasn't even the easy move into the specially prepared second tube right next door—they caravaned across the entire setup and moved into the Por Amor  UndergroundCiti formicarium woooot.

They stuck it out in the torture chamber for most of a week. In fact they were very acclimated to even the direct overhead light by that point (though not close-up flashlight).

This was a couple days ago, about ten minutes after I'd triggered the last mini "GRAB A BEBE AND FLEEEE" cycle with some tapping. I expected them to be moving any time now, I'd rotated the tube multiple times, they haaad to be feeling disrupted enough right??? But seeing that these two girls had taken the "RUNAWAY" opportunity to dash out to the buffet and bring home a fruit fly, which they then acrobat tag teamed, made me realize it was time to get drastic. And by drastic I mean I did the one thing I realize now I should've done from the very beginning (and probably the only thing that actually really mattered), which was taking the AC tube reducer off the end of their tube and connecting them directly to the portal. doh.

Sure enough, 24 hours later I came back from a visit to a friend's to an empty tube! 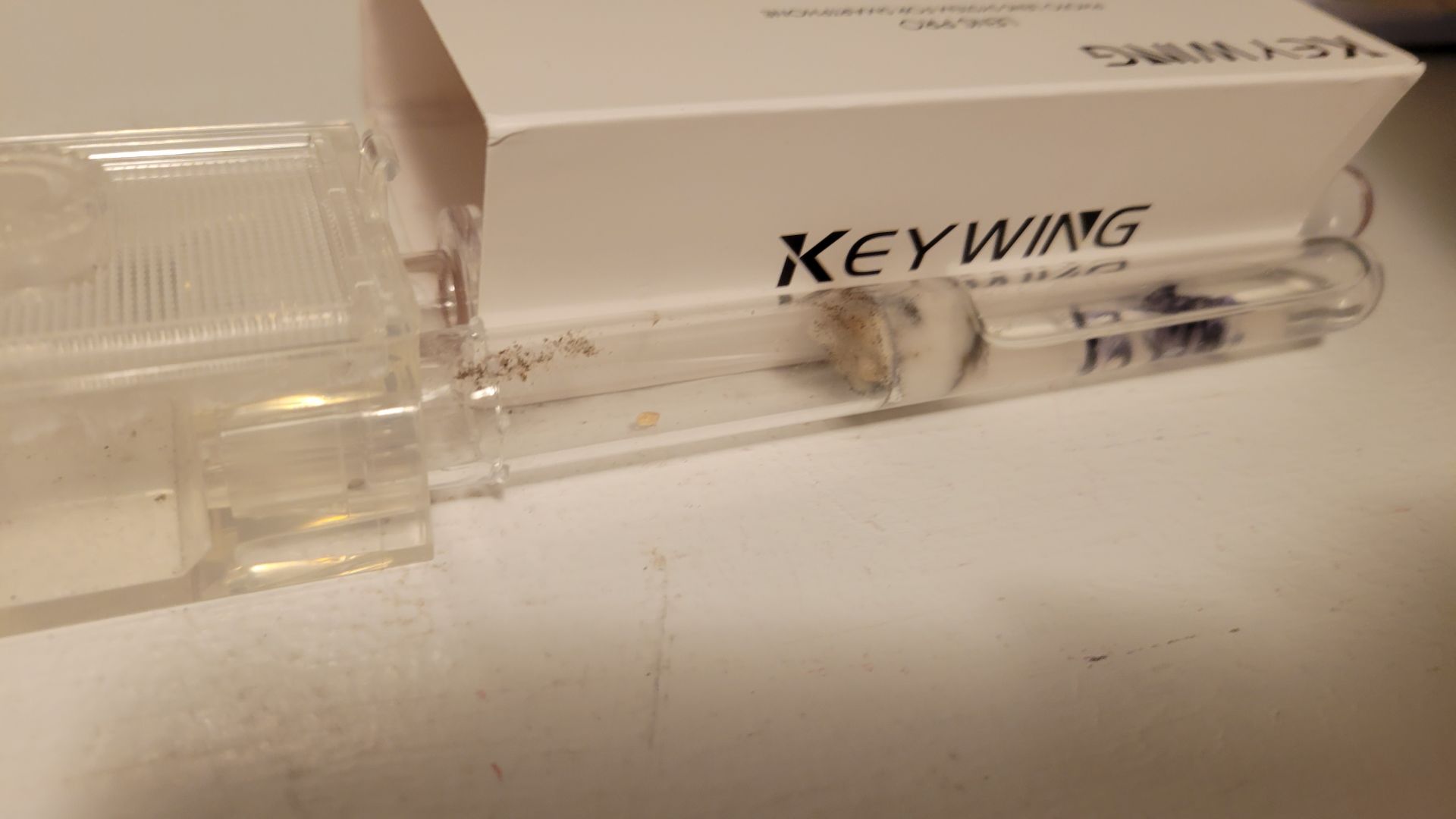 After a tiny heart attack when I didn't see them in the second tube either, I looked over and spotted three girls waving fruit flies from the buffet pile over their heads and hauling them into the nest

so I knew all was well. (the white stuff over the hydration section is sand, not eggs lol)
With so much time to look at them over the last few days, I'm pretty confident they've got 24 or 25 girls (as of last night) running around. And I, uh ... I can quite easily count at least 50 late instar larvae and pupae in those two pics above

So looks like mama really is gonna call my bluff. Go lady go

I'm sad that I won't see much of her anymore, especially since they've very traumatized by light and vibration right now, so I'll finally let her have some privacy for a while. She's a good girl and a helluva layer, I hope I have her for a long time!
Last couple shots of them out in the open: Not really of course lol, but still, a few weeks ago I had suspected I was seeing my first wave of non-nanitic eclosures coming already, and I was correct!

Obviously the m99 buffet has the good stuff wutwut

Blurry because I had to scramble for the exact moment when one of the oldest girls was in view next to one of the youngest, but still a marked contrast that's even more obvious in person: Meanwhile I've felt like the first picea eclosures are imminent for more than a week now, but every time I take a peek her pile has just gotten slightly bigger lol. But the two month mark isn't far off, so I guess she's just gonna go ahead and take the maximum amount of window I've ever seen referenced for A. picea first generations. Fingers crossed.

The first eclosures were a few days after I last posted: Fell in love with these girls immediately, they're so big and interesting looking, and so curious and active right from the start. They've been getting fruit flies and sugar water from the start, and the queen is always at the front of the line lol 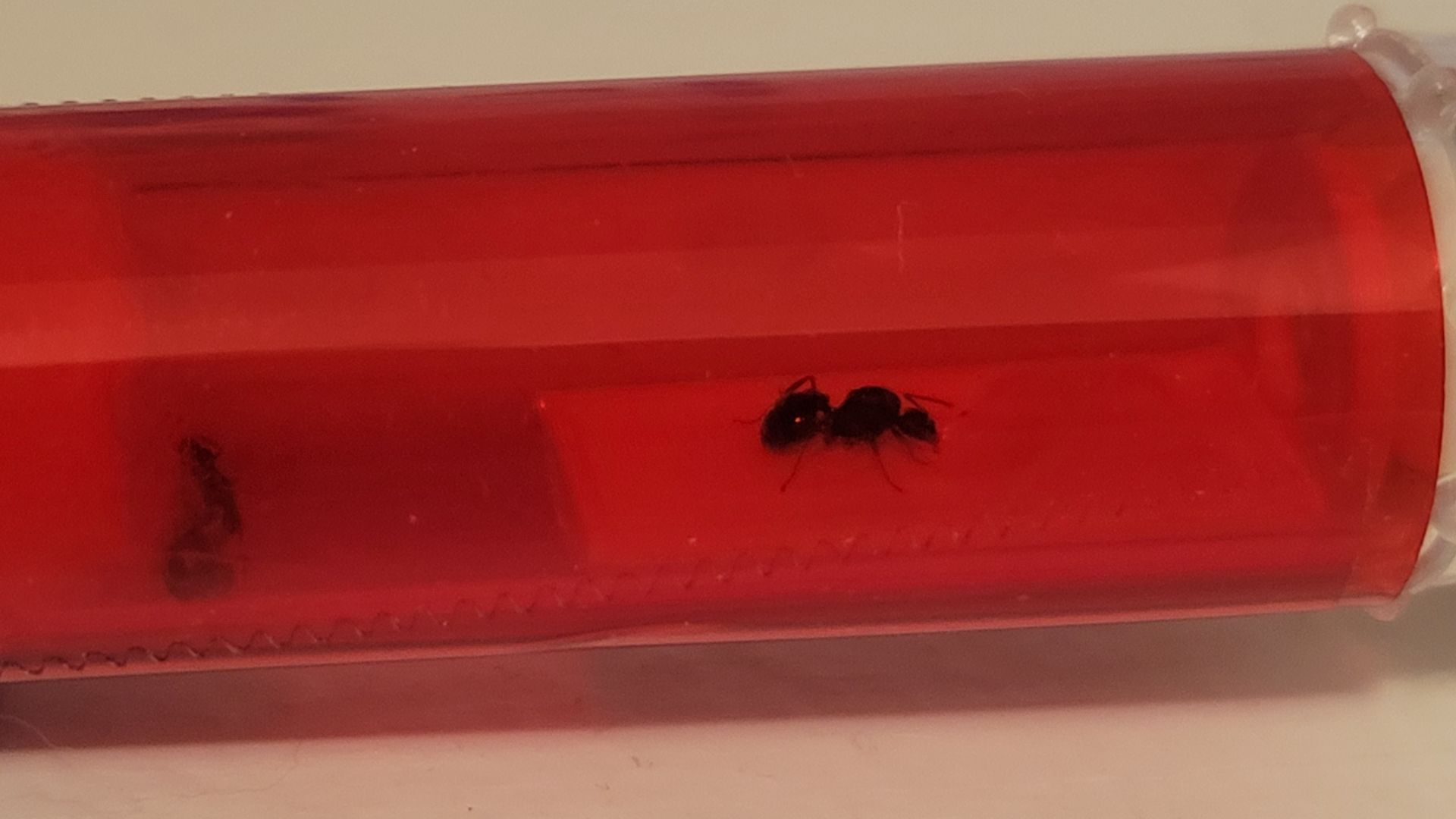 In total they're up to 7 ladies now, and I just hooked them up to an AC portal with a custom sized Por Amor grout insert in the tube across the way. That tube has a reducer and their claustral tube doesn't, so hopefully they'll be encouraged to move in by the time I get around to picking up my hibernation setup. Their claustral cotton is starting to get a little grey and the water's more than half gone so that's my hope.

Meanwhile the pavement ladies are booming. I haven't tried counting them for a while, but I assume they're around 75 or so, and will definitely be at 100 once that pillar of brood finishes up They've been a lot more communally active the last ten days as their numbers get big enough to always have a few girls wandering around outside. Their big project has been determining the trash situation, especially with the loads of fruit flies I keep giving them. Unfortunately the younger girls had chosen to put it against the near wall of their outworld, which I can't see in my linen closet setup. A few of the oldest occasionally tried to restart their old dumping site in the AC portal, but they never won the vote ... until— I'd watched her frantically trying to get out of the portal lid, and eventually it seemed obvious what was going on. Ten minutes later she was gone. I don't know for a fact that she was my very oldest and fondest, but I'm going to assume she was, and RIP to the OG. You did good little lady, you kickstarted a whole herd of sisters.

And as her final gift to me, her choice of graveyard convinced the girls to move the trash out into the portal again, where I can very easily see it to clean it. Uh, speaking of which, I may have killed one of the carpenter queens, Ms. Peggles most sadly. Somehow their apartments got tipped at some point and the water had slowly trickled out, she's totally unmoving in the toppled-over position even after being blown on a bit (no antenna movement either), so I'm guessing I'll be checking again tomorrow and have to give her the goldfish farewell, so sad. That leaves the winged queen, who was frantically trying to get out of the plug with no sign of laying, but that doesn't necessarily mean anything if they were drying out right away and spent several days baking in the heat. She's fully watered and flat now, and I made sure a healthy drop soaked into the grout on her side too, so we'll see.

On the plus side, tetra queen number three finally had the cutest little pile of (quite orange, to my eyes) eggs, maybe 7 or 8 in total. I certainly don't have high hopes for her, but since she's apparently decided to have a real go at it, I moved her up into the rack with the other two so she'll be in the full heat zone from now on.

"Goldfish farewell" - That should be the farewell all dead queens and colonies get lol.

Haven't had time to put together update posts with the pics I have, but none of the colonies have progressed enough to look drastically different than the last time they've been seen here yet, so it's mostly more of the same. I'll probably do more of an autumn summary around christmas.

But for now, finally was able to order the wine cooler I want which is on the way, so hibernation will be imminent!

Tetra crew: These girls really hate to move. Really really really hate to move. Even when their old nest hasn't been watered for a month and they have to haul all the pupae out into the mini-outworld once a day for climate control reasons lol. But fortunately, after nearly six weeks of being hooked up to their new mini hearth, I accidentally dropped their outworld lid on top of their nest chamber while feeding and that finally triggered the panic wave that led in the right direction, and they finally transferred over.

, but were much easier to scare out this time, and I've blocked the inner doorway leading to their old nest chamber with cotton to keep them out. Once they've started slowing down in the cooler during the transition period, I'll detach their old nest and get the hearth sealed up on its own.

Preno ladies: Really unhappy to still be living in room temperature. Seem to be eating plenty of sunburst but I never see them in their outworld and they ignore protein. Hopefully they'll start perking up during the temp drop-down month in the cooler and I'll get to see them out and about.

Aphaeongaster crew: I love these ants. They're so big and fun to watch. Still sitting at 5 or 6 strong (I can't remember) and after their claustral test tube finally dried out enough they've transferred to a fresh tube with a por amor grout insert where they'll spend hibernation. Since I love them so much and want to give them a good start, I'm planning to keep them properly hibernated for a solid four months. (The other colonies I'll probably start warming up again after 2 or 3).

Lasius americanus crew: I was fortunate enough to be able to grab one of the surprise late season Lasius colonies at Buckeye, and after an upsettingly long trip here because this country likes to just let a saboteur sit there running the postal system, they thankfully arrived completely healthy. They came with four and a pupae or two, but the queen jumped on the protein I fed them and quickly boosted a total of 5 into pupae. We've since lost one mega-fatty due to a tragic dried-sunburst-glue-trap situation (I think she might have cannonballed straight into it by all appearances lmao) but they've still got eight. I love how calm and beautiful the queen is, and how cute and hyperactive the workers are when they do their shudder sprints.

I'd love to be able to turn this crew into a desk colony in my new house next year, so we'll see.