67 replies to this topic

Yeah as I was looking at that pic up close I realized they're all fully striped up and extended right now, so that must explain it. I guess I just expected them to be juicing mom up too after hibernation, but maybe she's not in an egg laying phase right away, especially with all that larva about to go.

Good thought about the lice too, I'll have to consider that if it doesn't resolve itself I think.

Alright snow land surgery complete! I'm really glad I went in there, because it assuaged all my concerns about the prenos. One, they'd organized a lot more since a few days ago, so the mold didn't look nearly as bad as it did then (when they had the bodies scattered basically everywhere except the immediate water tower area).

In fact I decided to not even go into the top chamber of their bifurcated, and was able to slide the glass aside to quickly clean out the main chamber instead.

Unfortunately I didn't grab any pictures during, especially because the queen very quickly started running along the glass looking for escape. But this is the aftermath and the putty-qtip tool I used: 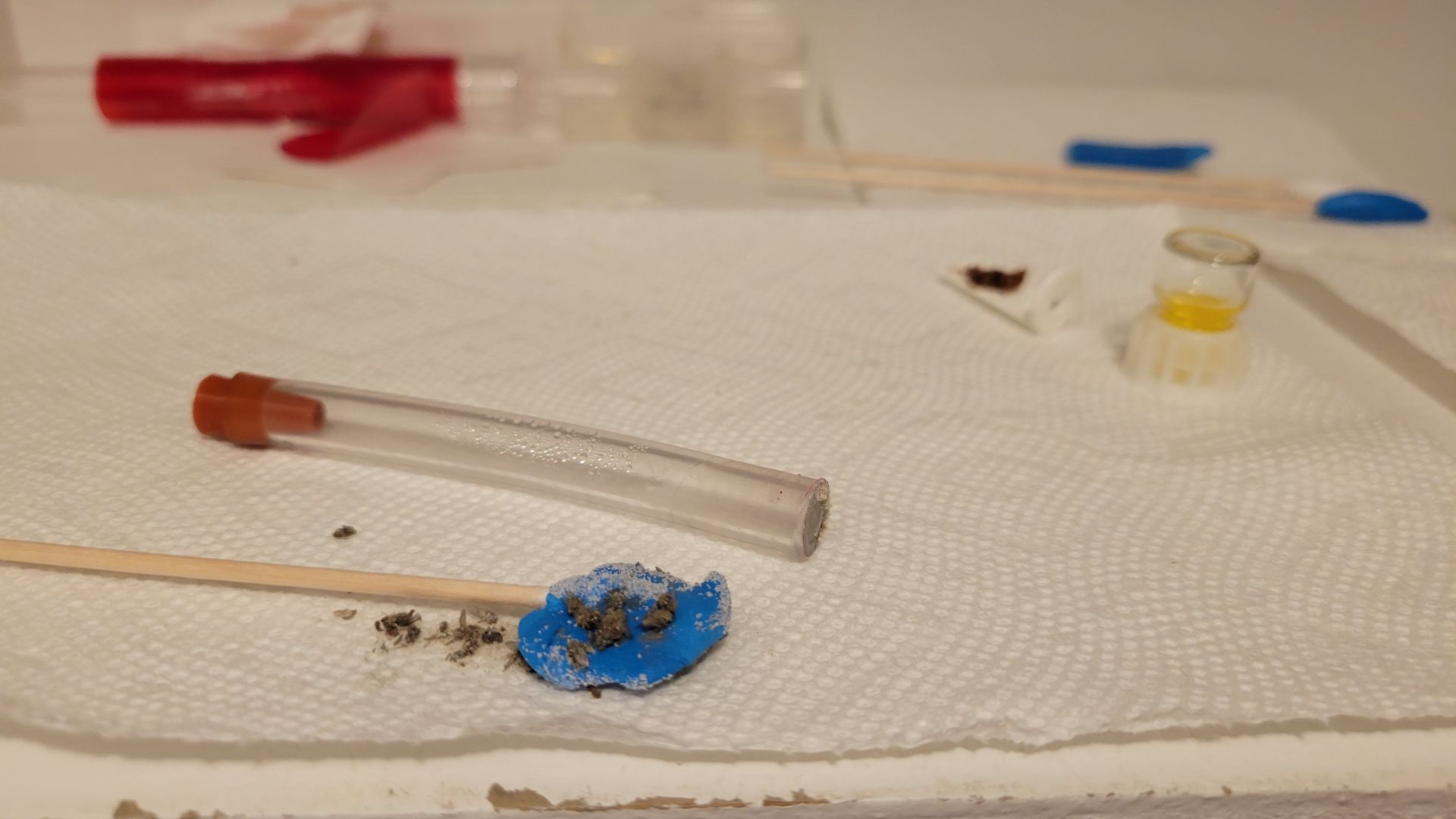 I got a good look at the crew and if I counted correctly it looks like they haven't lost a single girl over winter! And they were all fatty to the max, so I won't worry about their eating at all now.
I think I'll leave them in the cooler for another month-ish at the top temp of 64 degrees and hope they come into May with a pile of summer eggs ready to go into estivation.
Meanwhile the picea ladies also came out today, but I'll wait until they're warmed up and settled back into the ant shelf to take some update pics.

Well, it looks like the second year Preno curse has struck me too.

I'm holding out hope that some new food and a day at warmer temperatures might lead to a miracle, but the queen was on her side on the water tower the last time I checked and I don't have much hope.

I'm really sad about it because I got to spend so much time looking at her so closely, and she features so heavily in this journal so far. I know they're a really hard species to get going through the second year, but I also feel guilty for what a rough start they had and how much stress it probably caused her over the last year.

Anyway. I'm hoping I'll come across flying queens myself this year and in the meantime will hopefully be able to keep the remaining girls alive. If so, I'll attach the queen's test tube to the mini hearth once they're confirmed to be viable, and hope I can keep the colony going.

First the bad news, preno queen long dead, no new queens found or captured this year, can't find any for sale online, probably going to have to eventually freeze the poor remaining workers which breaks my heart. They're probably not long for this journal anymore.

Nylanderia sp (pres. faisonensis): Has two small piles of eggs, impossible to see clearly without pulling her out to look under my loupe. Concerned about the yellowish cast of the eggs that I can see, but she seems happy and healthy otherwise so hoping for normal development and eventual inclusion in this journal in a few weeks. (these are capture pics not her claustral tube setup). I found one more nylanderia queen last week in the same location, but she'd been in a pool and I decided not to keep her. But I do plan on catching any healthy ones I see and trying to turn this into a polygenous tube. 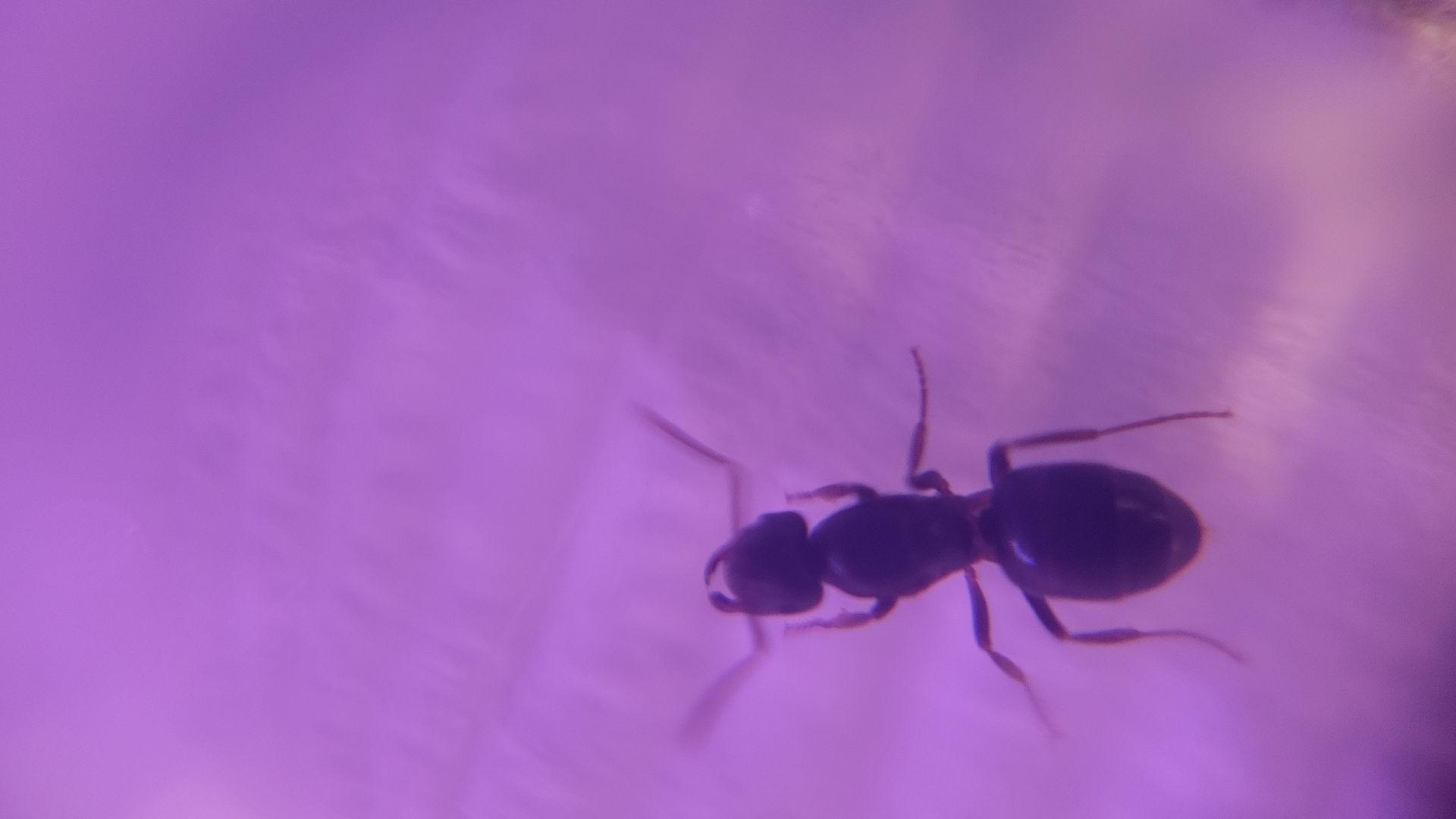 Called to me psychically from the patio or something because I suddenly got the impulse to do a lap around the backyard and she was right there running at me. But, released after ID because I don't need what is basically a parasitic duplicate of my existing americanus queen.

Booming. Mama's doing her best to make me nervous about whether I want to try and move them into a larger formicarium before my move or not. Piles of cocoons 24/7 these days, and another batch of eggs on the way. They just got done doubling their numbers, and I think they're around 30-50 girls now, but it's hard to tell and changing quickly. I put another tube on their AC portal so they have expansion options, but if they keep growing this large I might regret not having them in a proper formicarium before the house move, we'll see. Seem to be doing great, I'm guessing somewhere around 20 workers now. I take almost no pictures of them though because mama is so much more upset by light than the other queens.

That’s a lot of cocoons! Good luck with all those Tetras

Yes I think secretly I'm moving house for the ants, not myself. They demand it