117 replies to this topic

July 20
I went to a location similar to the one I went last time, an arid Badlands environment prone to flashfloods in the southern desert. Dorymyrmex bicolor, Pogonomyrmex rugosus, Solenopsis molesta and Pheidole were all flying at the time. Some other winged queens of a species that looked like large yellow Lasius queens were flying as well, I wasn't able to get images unfortunately. I do remember the queens had partially black wings.
I also came across another species I had never seen. The workers were large, around 6 mm, and had the appearance of a Formica species, however in this environment I have never seen Formica at all. I'm thinking it could be Myrmecocystus mendax but the red contrast was very pronounced. See the last two images, any suggestions?
The large Pheidole flights at the time, due to the lack of any trees or large bushes in the area, the queens and drones were attracted to me and my partner, as we were generally the tallest landmarks in the area, making finding and collecting them quite easy. 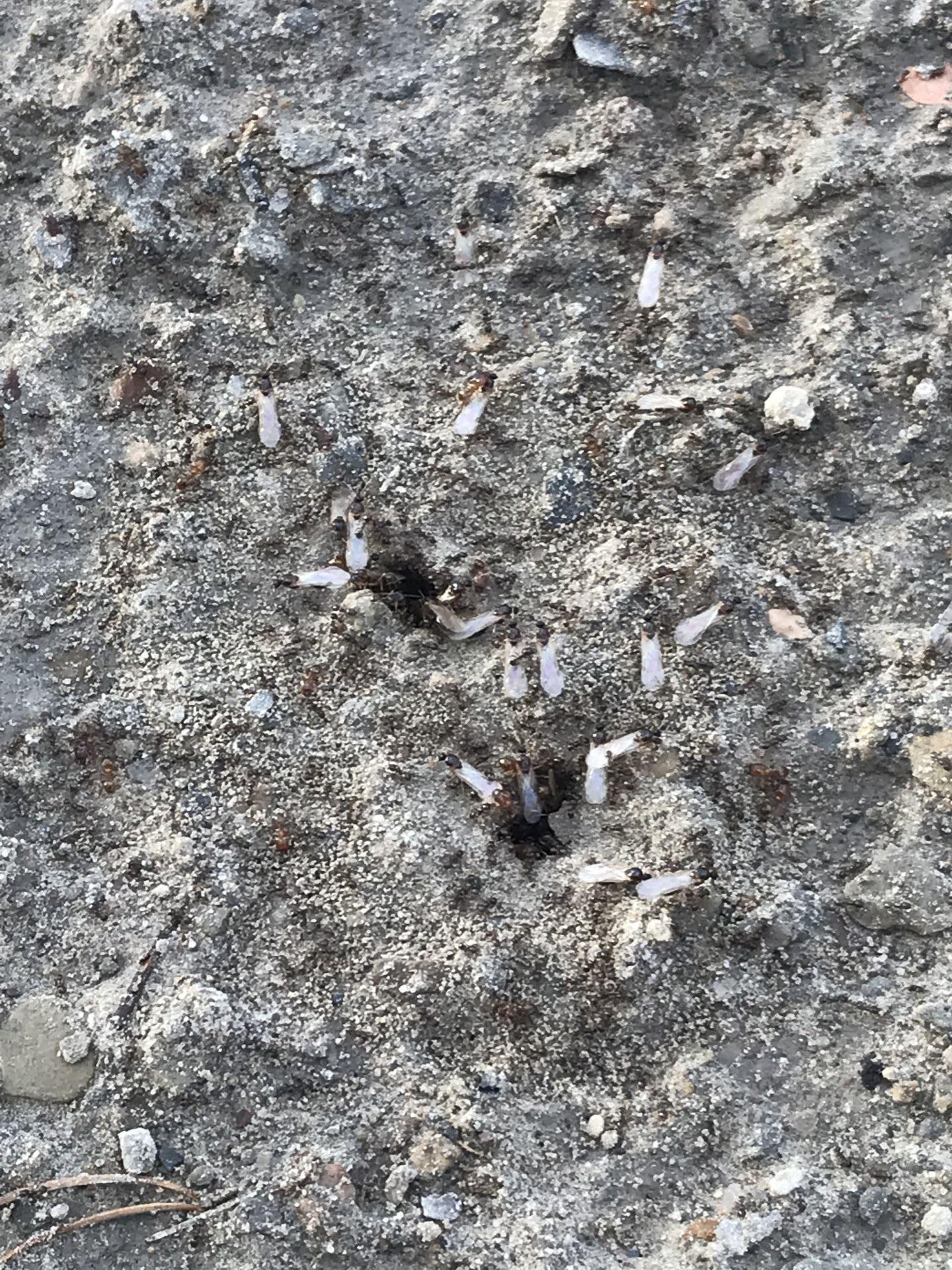 Species in need of an ID. Images are blury but does anyone know the genus? 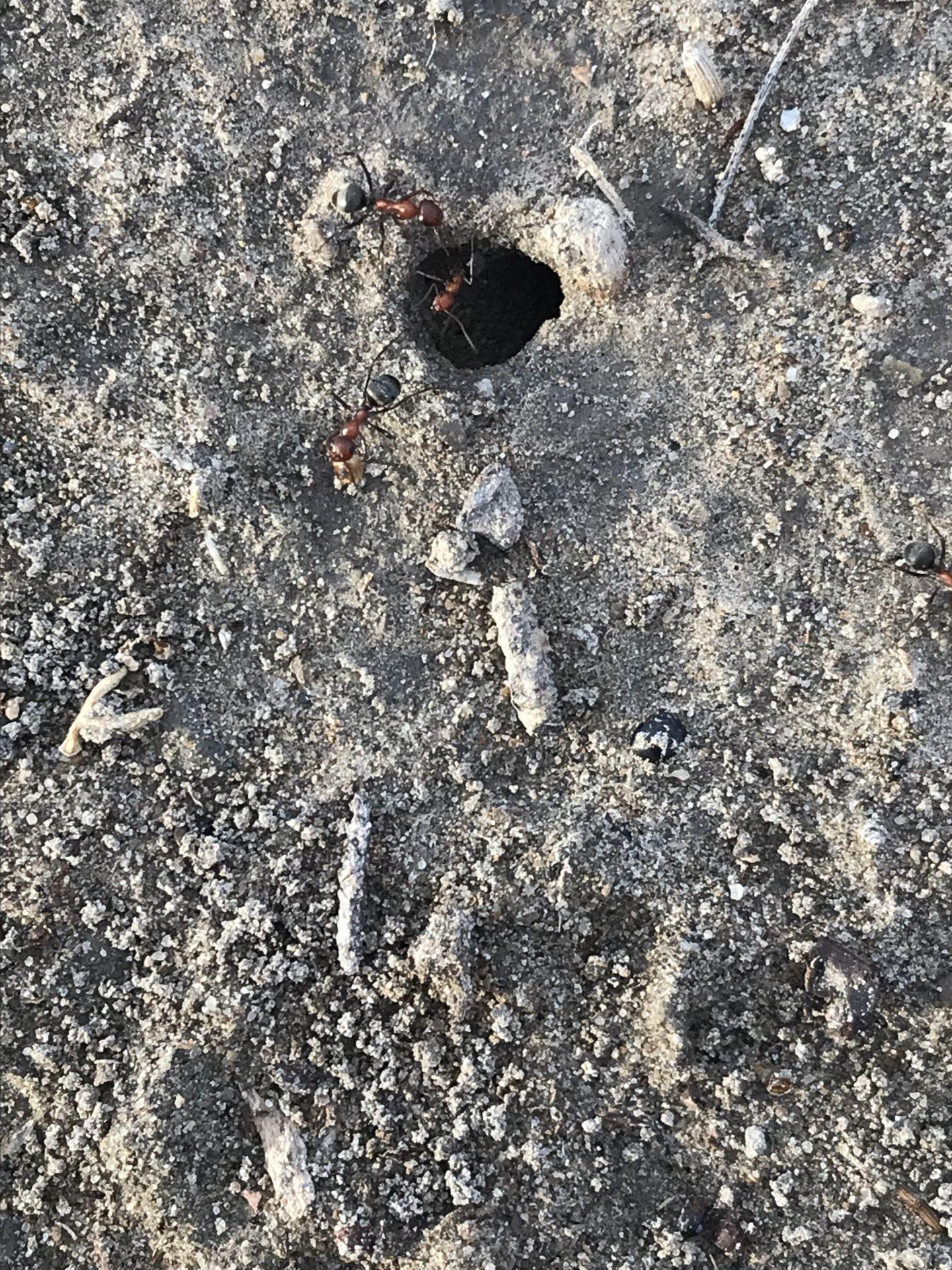 Those ants are formica sp is

It looks like there are some species of Formica that do in fact live near seasonal washes in the desert. It appears "wood ants" and "field ants" are not so exclusively limited to forested locations as suggested by their common names.
I'm thinking Formica perpilosa, as documented in this article. The behavior and looks seem to match, although without proper equipment I can hardly guarantee the exact species.

Large Temnothorax and possibly Crematogaster flight today after the heavy thunderstorm last night. I checked for Pogonomyrmex flights but nothing today, maybe tommorrow

Lots of termites flying around all day as well

Are you finding all these exclusively in southern utah?

I find the pots and rugosus down south, I find the rest up in utah valley.

Yesterday there was a large Pogonomyrmex occidentalis flight, 100's of queens swarming every other tree in the area. I also found some monomorium flights, they seemed atracted to the color yellow Wow thank you so much. Nice finds!!

I’m in utah valley for the day I’ll keep you guys posted. What habitats were you seeing the pogonomyrmex?

Look for undeveloped fields with sagebrush and a few trees. Use Inaturalist and AntMaps for exact locations, and keep your eyes out for fresh founding chambers in areas that got rain a few days ago

Awesome thanks. Found a couple unmated Formica queens and a dead Camponotus but no luck on something for my colony. INaturalist is great ant maps has a lot less in northern Utah that I had seen in comparison. Hopefully this rain brings some flights.

Solenpsis xyloni flights in St. George on the afternoon of August 9

Flew while it was raining lightly that day

This little ant landed on me last night (8/15/2022) at Eagle Park in West Jordan.  I have placed it in a test tube.  Wings are still on so I am not sure it it is a male or a female.  It immediately took to the wet cotton end of the test tube.  The test tube is now in a box to keep it dark.  Does anyone know the species and gender? This little ant landed on me last night (8/15/2022) at Eagle Park in West Jordan.  I have placed it in a test tube.  Wings are still on so I am not sure it it is a male or a female.  It immediately took to the wet cotton end of the test tube.  The test tube is now in a box to keep it dark.  Does anyone know the species and gender?

Definitely a queen, possibly a Pheidole or a Solenopsis sp.

Those Mystery Formica are parasitic, in the difficilis group.

Here are some better photos of the ant I collected on 8/15/2022 at Eagle Park in West Jordan Utah.  I put this together from the best shots I could take with a cheap USB microscope camera looking through the test tube. Any further identification of this ant possible?

I took these photos tonight, one day after capture of the ant and it still has its wings.  Not sure if it is mated.  Is there a way to tell?