Pheidole metallescens is a small, iridescent species native to the southern United States. It is closely related and has many behavioral similarities to P. bicarinata, a more commonly kept species. P. metallescens is known for being one of the only iridescent ants in North America -- tiny minor workers shimmer like little blue/purple jewels when light is shining on them. In darker lighting, they appear completely black. Queens and majors, instead of having the black iridescent color of the minors, wear a red-and-brown color scheme with no iridescence. Colonies are monogyne and maximum colony size is unknown.

This is a fairly common species around me, and I've always gotten them at my blacklight on summer nights. I'm not sure why I never started a journal on this species, but I've also never really tried to raise a large colony of them. Sometime in June of 2020 I caught a queen and decided to rear her. I'm starting to gain some enthusiasm with this colony, so I figured I would start a journal on them to document their growth and see how large they end up getting.

This was a few weeks after the first nanitics eclosed. 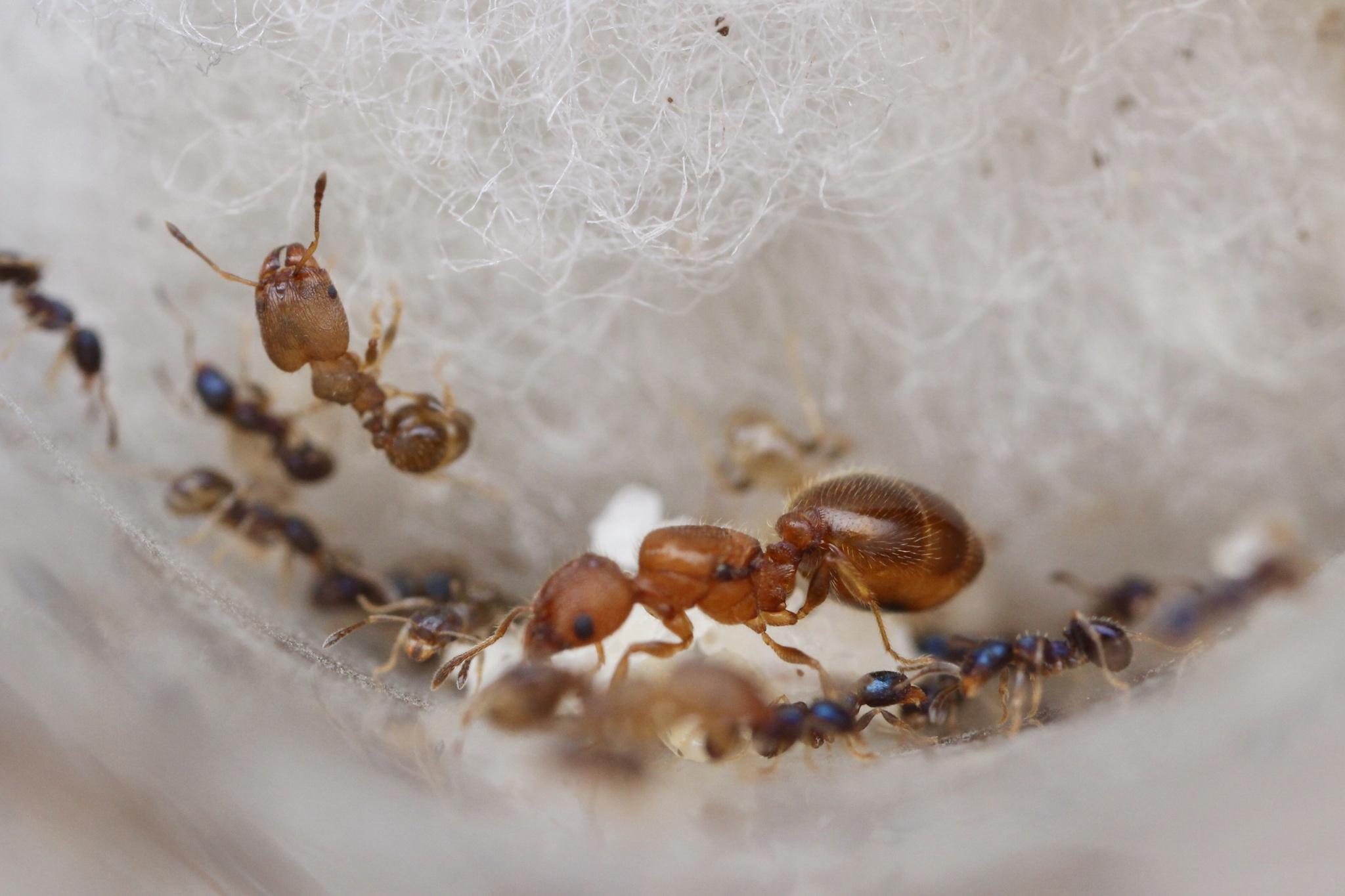 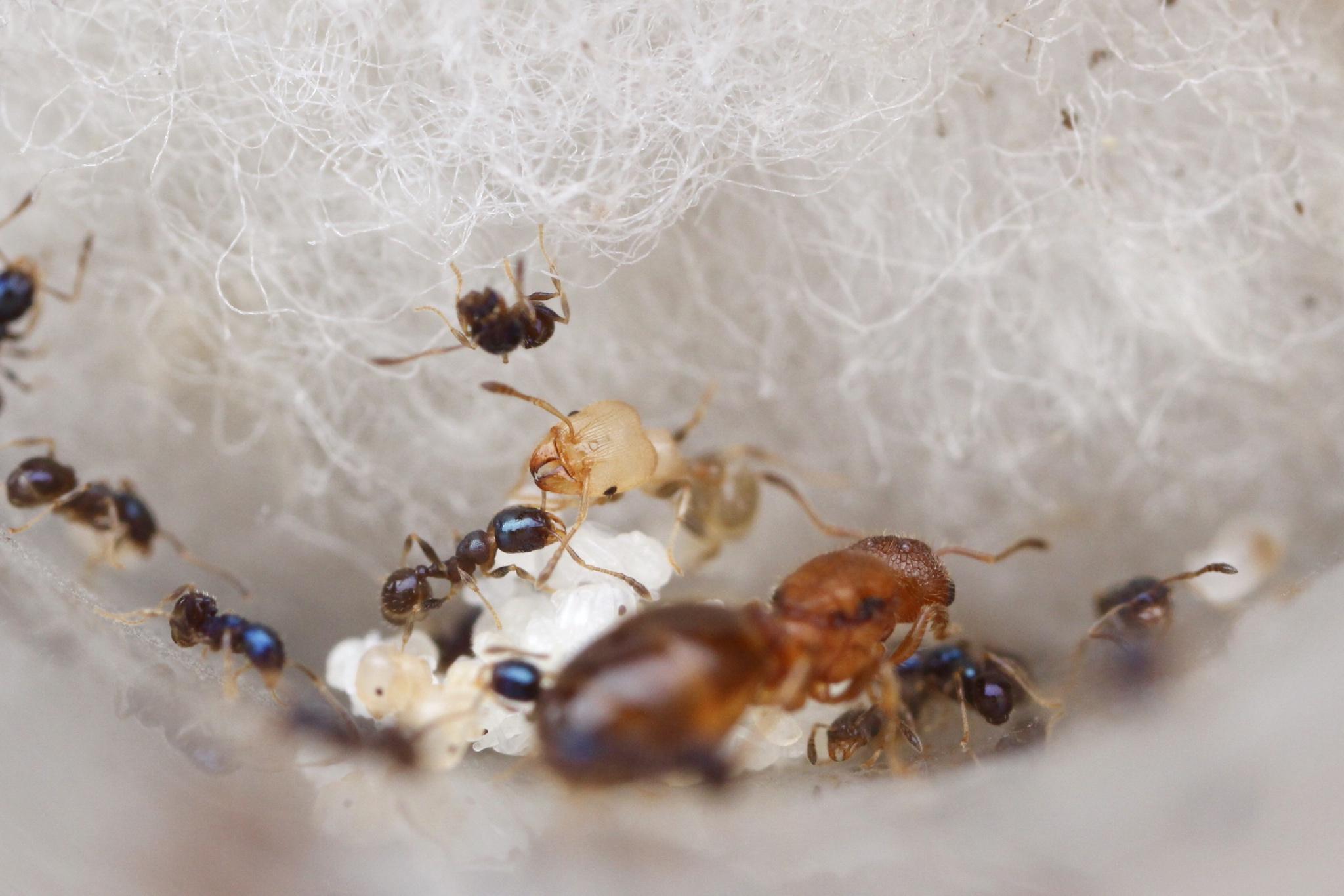 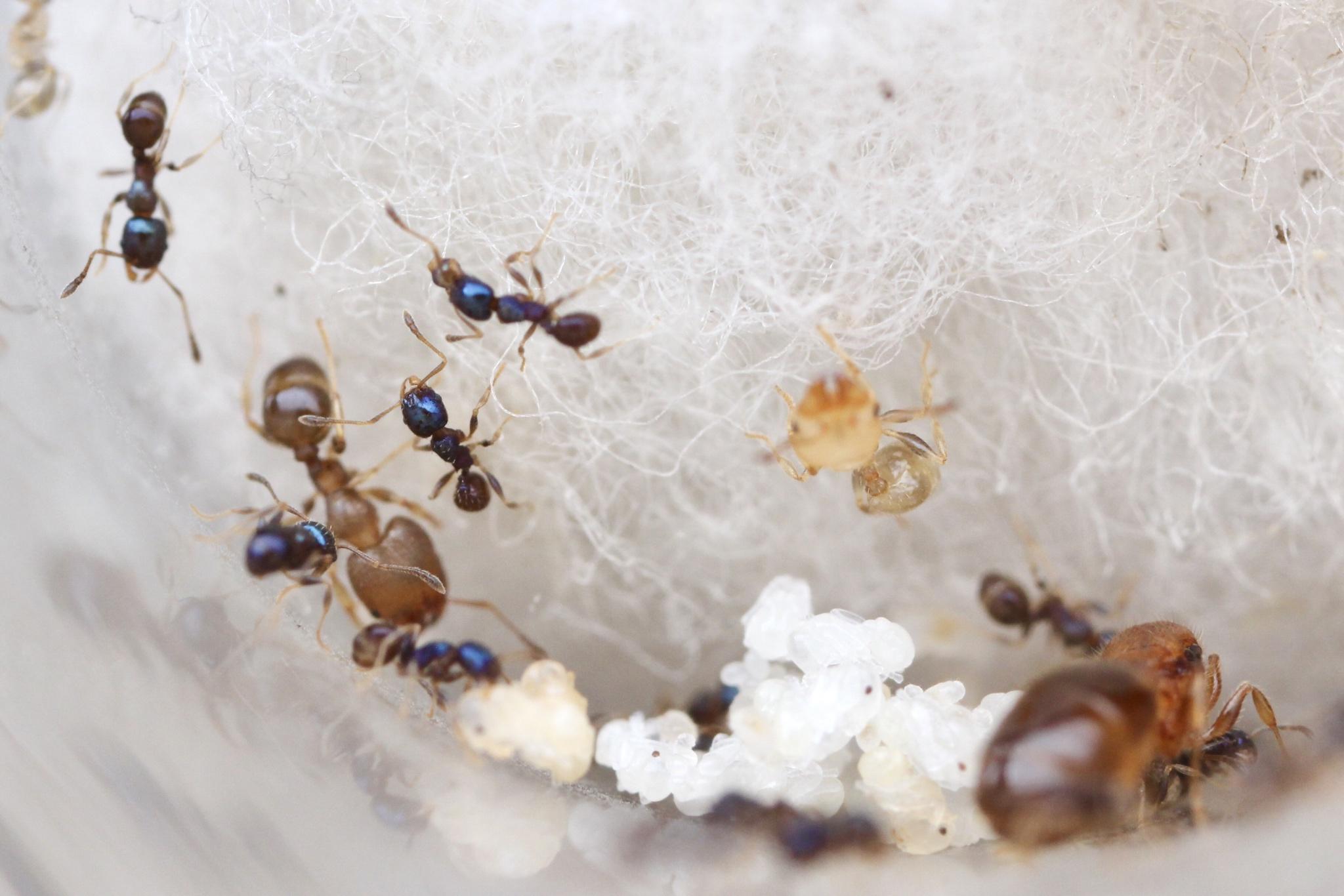 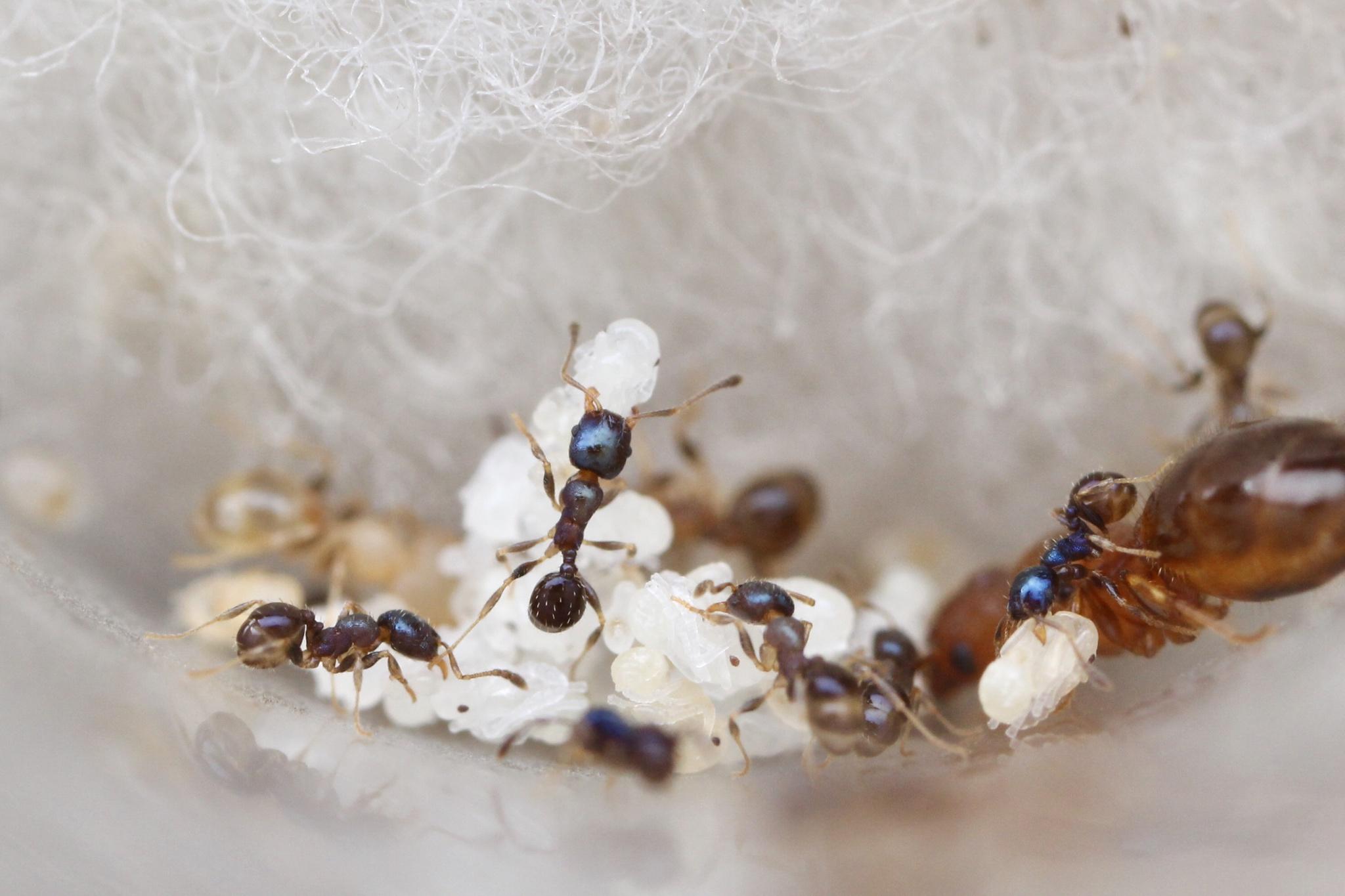 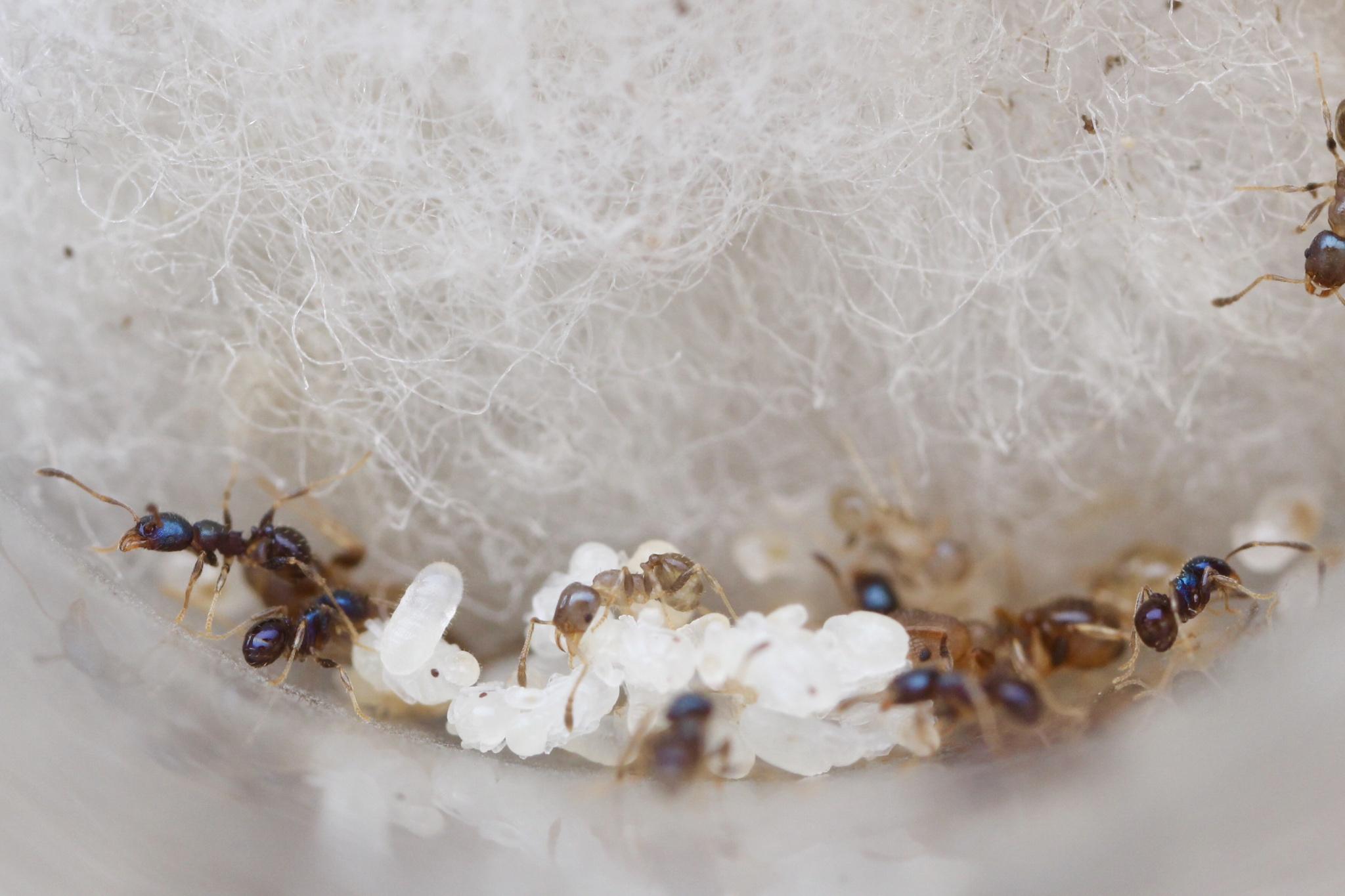 This is them now. For a couple months I wasn't really feeding this colony much, so they could've been larger by now. Ever since I moved them into this nest I made (a couple weeks ago), they've been getting a lot of roaches. They usually don't have a very large feeding response, but I know they're getting plenty of fulfillment because the queen, majors, and larvae are looking nice and plump lately. Recently they pulled a bunch of legs off of some baby roaches I gave them and distributed the legs among the larvae that sit on the water reservoir. It was a cool thing to see but I haven't gotten any pictures of it just yet. I've never seen tiny ants do something like that. Something I've also noticed more recently as I've been keeping them at a very warm temperature is that the workers are amazingly fast-moving, much more so than any other small Pheidole that I've kept. Their speed and movements remind me of Brachymyrmex patagonicus, believe it or not.

There are more than 1,600 workers as of today. The glass of the nest is very wet/condensated right now, so that is why these pictures aren't the best. 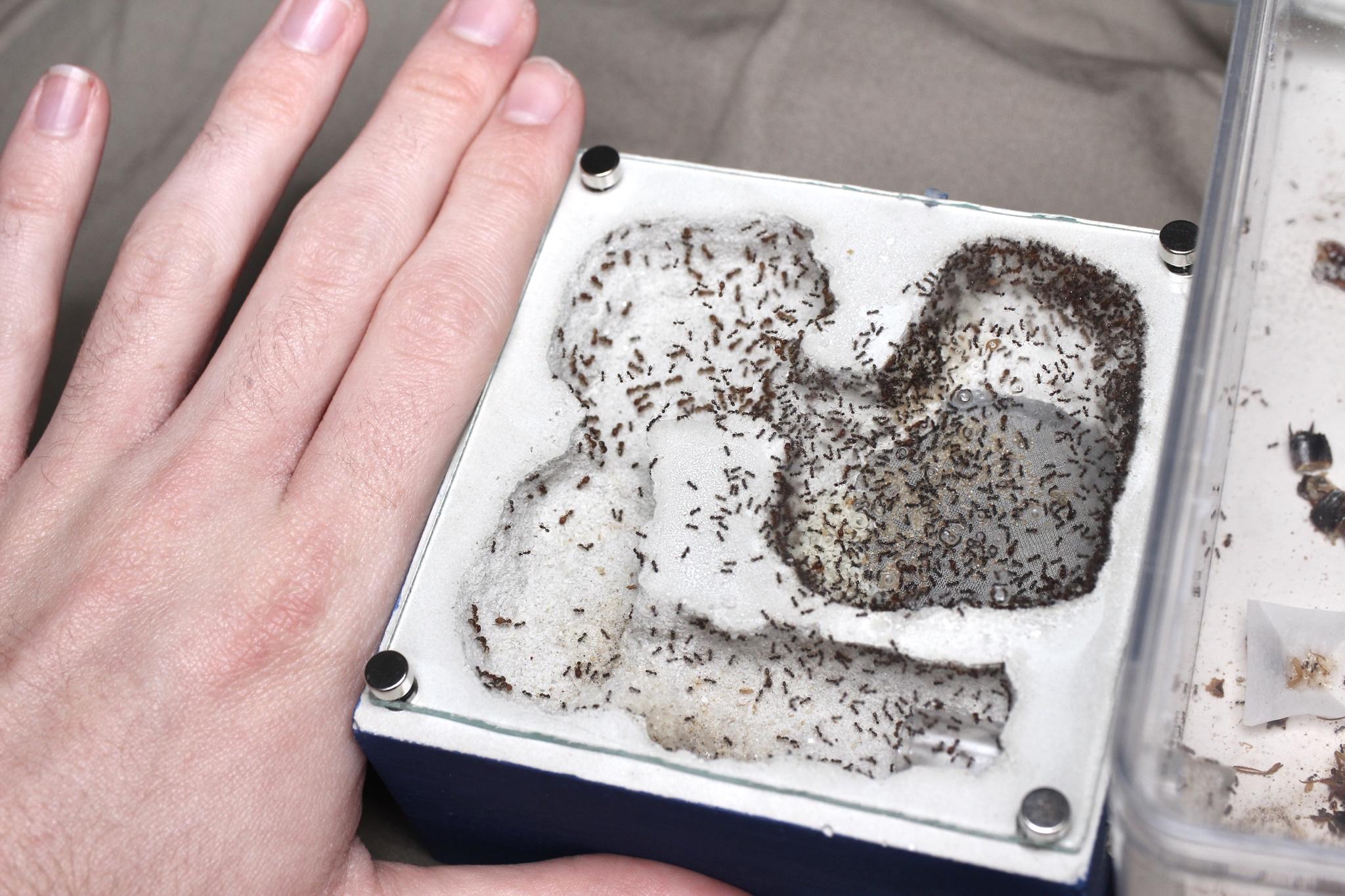 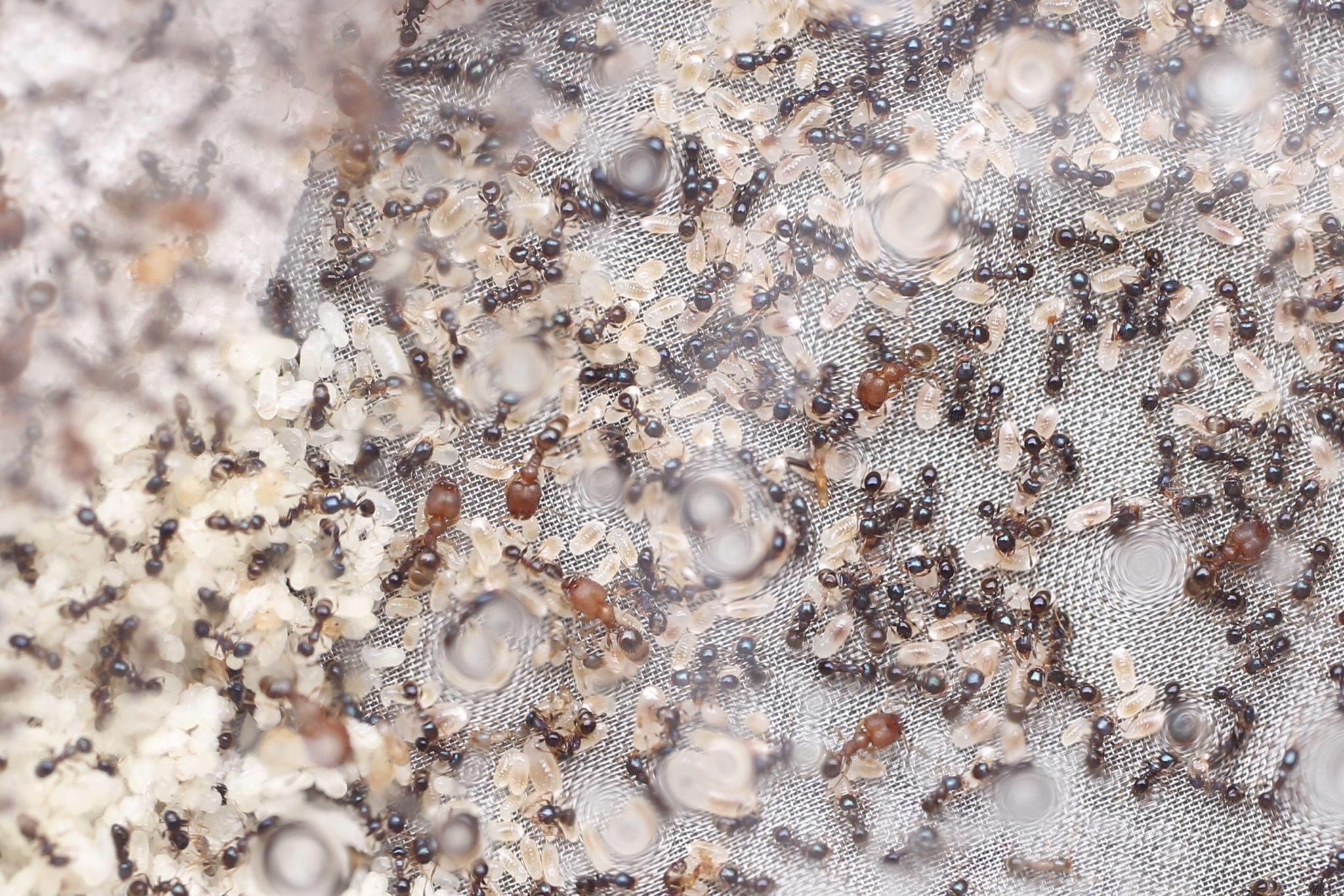 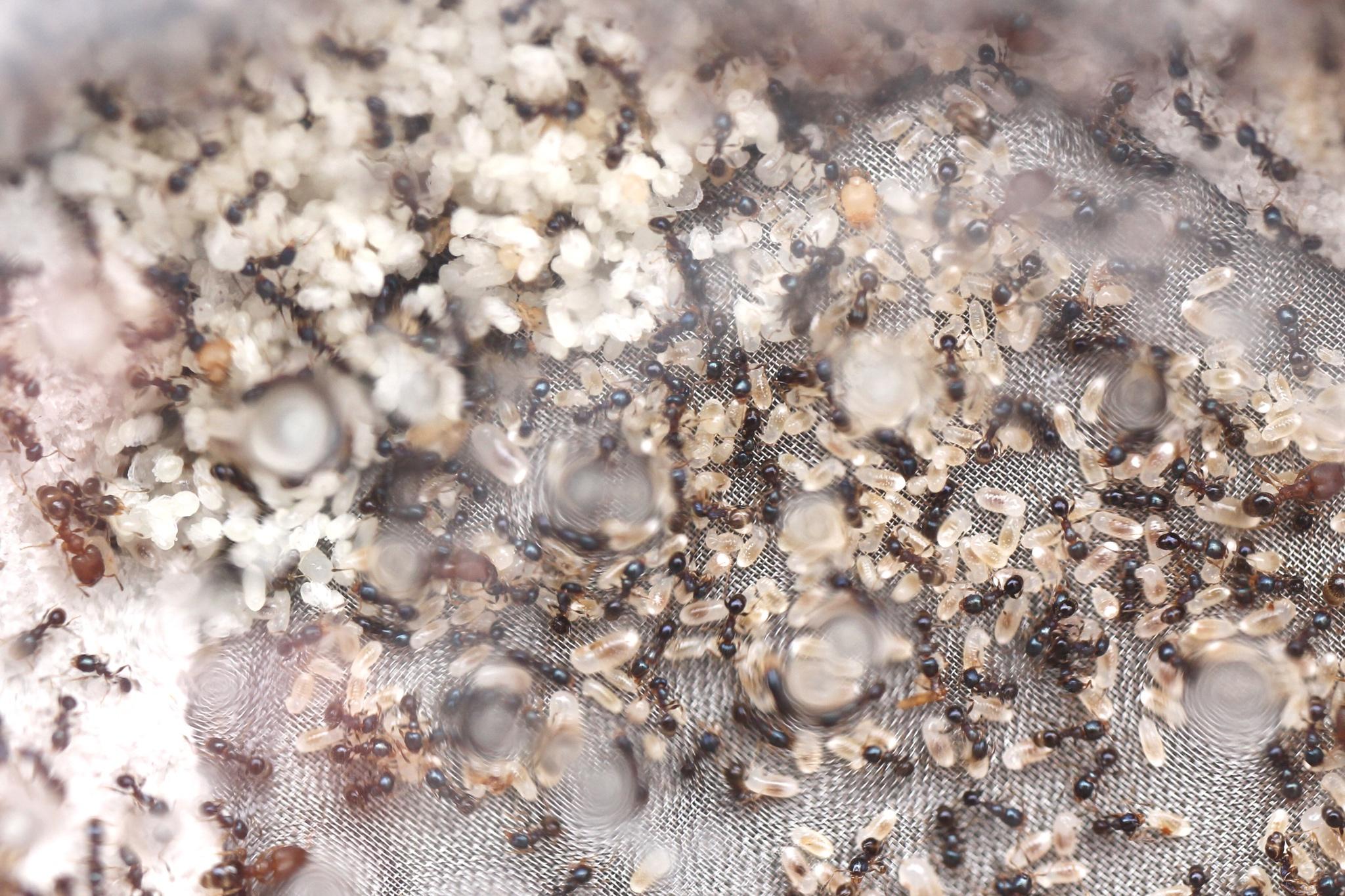 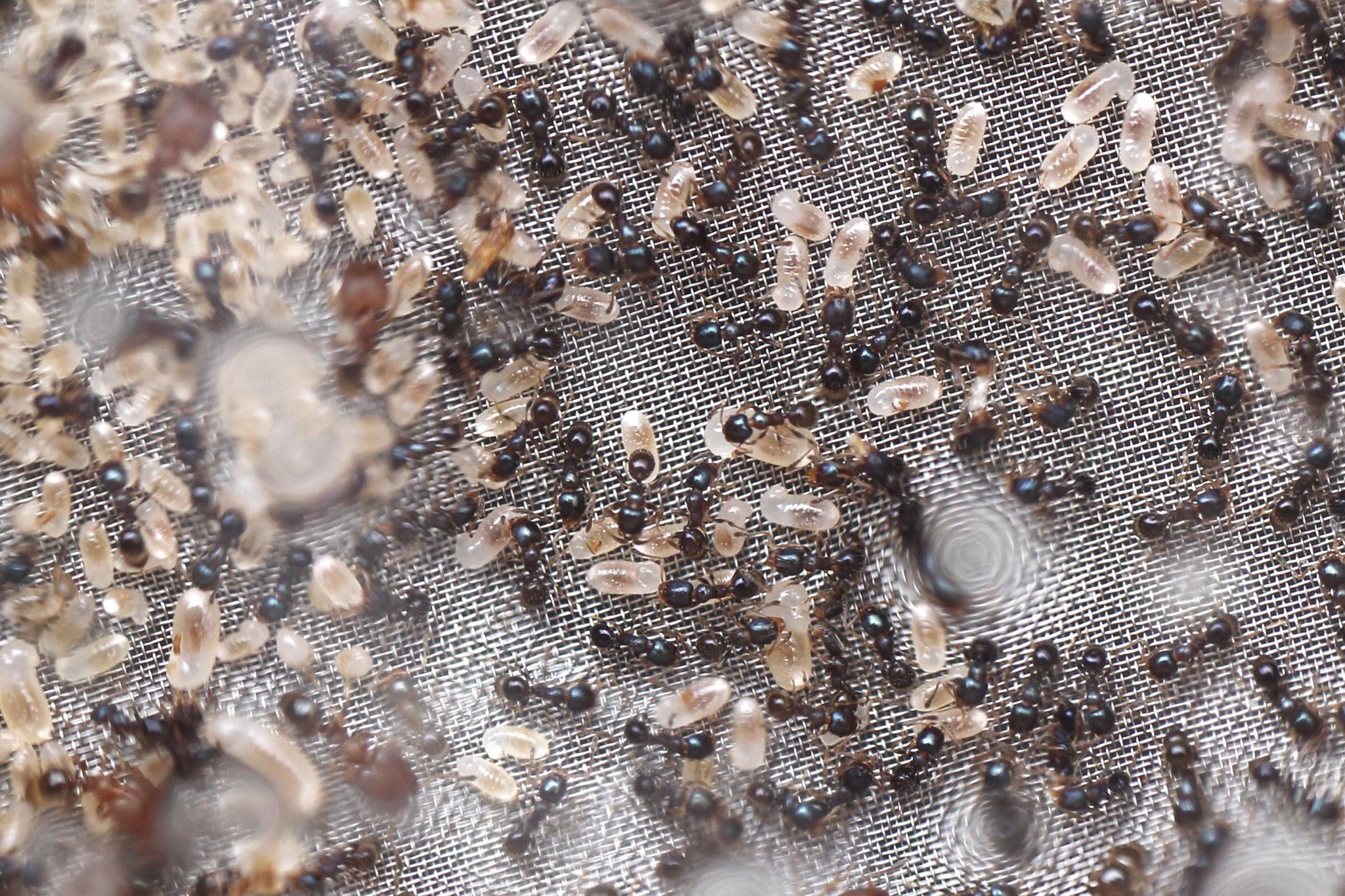 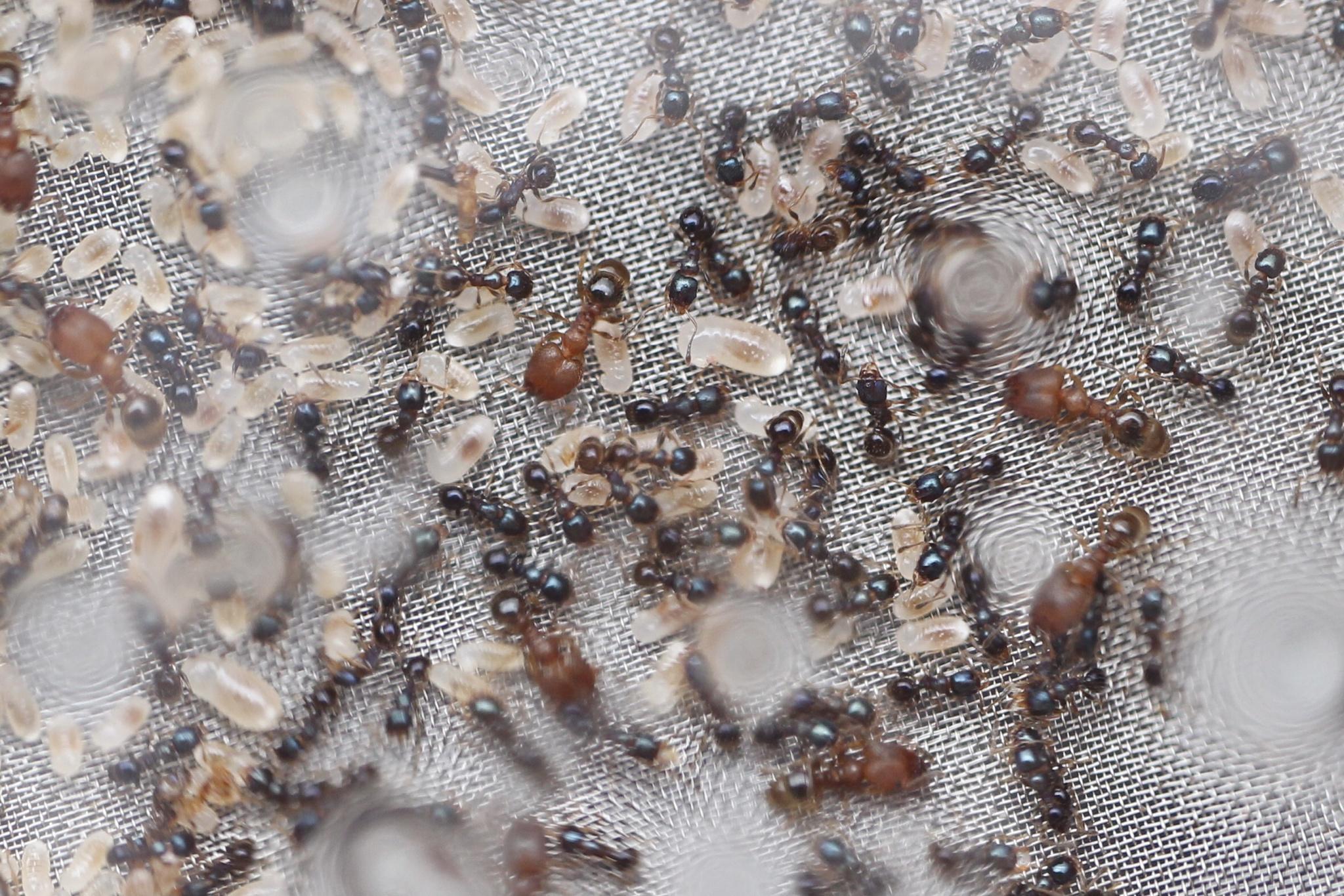 Very nice! Is that a tarheel formicarium?

Ummm. I feel dumb. Should I read more carefully. Anyhow, how did you make that nest? It looks so good.

Iridescent Pheidole! What could be cooler than that??

Aaron, how is this colony now?

Also tagged with one or more of these keywords: pheidole, metetallescens, iridescent