I have a small Camponotus colony. The queen was sold to me with brood as Camponotus chromaiodes, and her appearance fits the description, but she's since had a couple dozen workers and they're black with gold setae, when C. chromaiodes workers are supposed to be red. But the queen still has red tints to her legs and the bottom of her thorax & abdomen, which C. pennsylvanicus queens apparently don't have. What species have I got?
(For reference this queen was sold by Tarheel Ants, so would have been harvested in North Carolina)

Here's a picture of the colony:

But because my camera is awful at capturing the aforementioned traits of the ants, here's some pictures I found online that look nearly identical to my ants:
The queen: 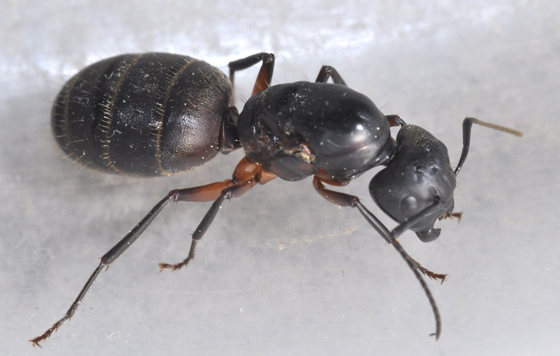 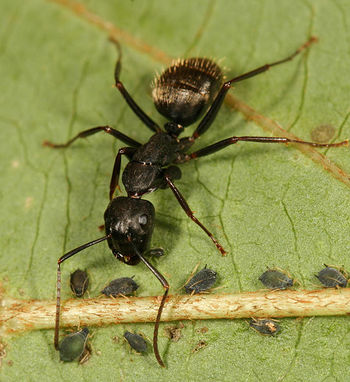 Sourced in North Carolina. I also found an identical queen myself last year by a rotting stump in a wooded area, but she was injured and didn't survive. She was nearby a black-workered colony having its nuptial flight so she may have come from that colony.

Anyone know what this species is? Is it just a color variation of C. pennsylvanicus I didn't know about, or something similar?

Based on your location and description, you most certainly have Camponotus chromaiodes, but rather the dark form. Those pictures you found, however, are Camponotus herculeanus and C. pennsylvanicus respectively. If you'd like, check out my journal (in signature) so you can see what I've done with my past and present colonies, and how they thrived.

My current colony has around 600 workers, living on a diet of crickets, superworms and mealworms with pieces of apple, some honey and sugar water, living in a THA Fortress, homemade grout nest and THA Discus all connected together, in case you don't want to read through all of it.

Second edit: Here's a paper on it, though it does omit the existence of a dark-form C. chromaiodes: Camponotus chromaiodes - AntWiki

Also tagged with one or more of these keywords: camponotus, ant id, id, chromiodes, pennsylvanicus