Has anyone kept Incisitermes minor? (Termites)


56 replies to this topic

I found some. What type are they and what do I do now? Also please tell me that's a queen.

Those look like Zootermopsis (dampwoods), but also may be subterranean termites. (What are the measurements of the workers? If you found the queen in the wood they're most likely Zoots because subterraneans nest in the soil.) That also is a reproductive, probably a queen because of the extended gaster, but you need a king and a queen to have a termite colony because the queen continually mates with the king.

I'd suggest going back to the place you caught them and looking for another brown reproductive. If you can't find one, collect some nymphs and hope that they molt into a secondary reproductive king for you.

They were living in the wood. I don't think I'm gonna get a chance to go back. Can these workers turn into reproductives?

They were living in the wood. I don't think I'm gonna get a chance to go back. Can these workers turn into reproductives?

100% Zoots with those measurements. Most termites are way smaller

I’m pretty sure workers can’t turn into reproductives, but someone with a little more termite knowledge might pitch in, as I’m not fully sure about this.

How many did you get?

Will this work for now? 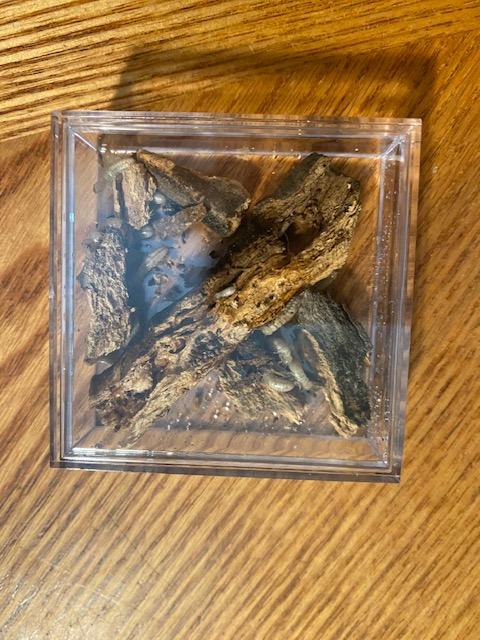 Yep! Is that wood from where you collected them? If so, that’s great.

What ventilation is there? Also you might want to add a tiny, super thin layer of soil at the bottom so the termites can also hide under the wood against the soil.

Yeah. Wood is from where I collected them. They have no ventilation right now. Will they be okay till I get home?

ya probably, just open the container once in a while? nice btw!

Yes they can molt into gynes! Best of luck with your colony, M_Ants! Keep us updated on the colony, maybe make a journal?

That is one advantage of Incisitermes minor. They don't have workers, they have pseudergates which can turn into both male and female alates, no nymphs required.

With that said. I dangerously broke apart a burnt dead tree (well in this case it really is dead and burnt in a fire from decades ago so it doesn't harm anything). It was a little dumb with some of the bigger limbs since its by myself and I could have got hurt, but I live dangerously

There is only one more limb I can break I know has more Incisitermes, and I heard it crack, but I got to revisit. This limb isn't dangerous, just was hard to break. One was pretty stupid and was abandoned long ago so was a waste of time. On other hand, gives a huge amount of wood for the local subterranean termites to move into.

Either way. I think Incisitermes minor might be VERY sensitive to plastic compared to subterranean termites. Not sure how Dampwoods would be with this. I think the problem this whole time is two things.

Keeping them outside = bad. Keeping them in the garage = bad. Keeping them indoors in room temperature like Pepsi kept his = good (hopefully its my theory anyway lol). I also put them in a medium sized clay plant pot, chemical free. Its also really old so whatever bad might have been in it or not is long gone. And I'm keeping them in the living room, which we often keep humid at night, which should help a lot. In their natural environment, they get fog at night/morning, and maybe they do need a bit of humidity to survive, not just 100% complete dryness which they got in the garage.

Not sure how big of a colony I got, but sure is a lot of termites exploring the ends of the broken tree limb. Sadly, no nymphs or signs of soldiers. But again, these are pseudergates, they could even become just secondary reproductives (which Incisitermes can have).

Hopefully more success than in the past with the big changes.

I don’t think those zoots you collected have a king though, which probably means they won’t survive unless a worker becomes a king.

Are we certain they are zoots? They were in fairly dry wood. Also I though people typically caught termite colonies and had workers turn into reproductives. Is it rarer than I thought?

Are we certain they are zoots? They were in fairly dry wood. Also I though people typically caught termite colonies and had workers turn into reproductives. Is it rarer than I thought?

These are zoots for sure.