104 replies to this topic

You have termites where exactly??? Also, you can grab termite alates from a nest and they may still start a colony, as the males live with the females for life and breed in captivity.

BTW someone created a new Facebook group just for termites, and I told them I would mention it here.

I was given a bunch more of these termites by ArtimusClyde. I divided them in pairs as best I could. It seems pretty much impossible to tell which is a male and which is a female. Supposedly the males will follow the females, but really it seems they all just follow each other around randomly.

I put eight of these in test tubes with little pieces of rotted wood in with them, and I put three in really small round containers filled with a peat moss/clay dirt mixture.

So far I don't see any progress in any of the new "colonies", except one in the test tubes looks like it has one yellow egg.

The older colony is getting pretty big. I would estimate they have over 500 workers now. There seems to be tons of what looks like eggs, but it's hard to tell because you can only see them on the bottom of the jar.

Since it's always so hard to see these and I can never get any good pictures or anything, I decided to design a termitarium just for them.

I took two lids of the containers I use for most of my setups. I poured Hydrtostone in one of them, leaving three ports through to the bottom side where I also poured Hydrostone. This should allow me to put this on top of a water tank with sponges and keep it hydrated. I drilled and threaded some holes in the corners so it can be screwed together. I'm using some aluminum screws for now, until I buy some stainless steel ones. I welded a cylindrical container to one end, and cut a hole, opening it up. This will be used as the foraging container where I'll keep the pieces of wood. 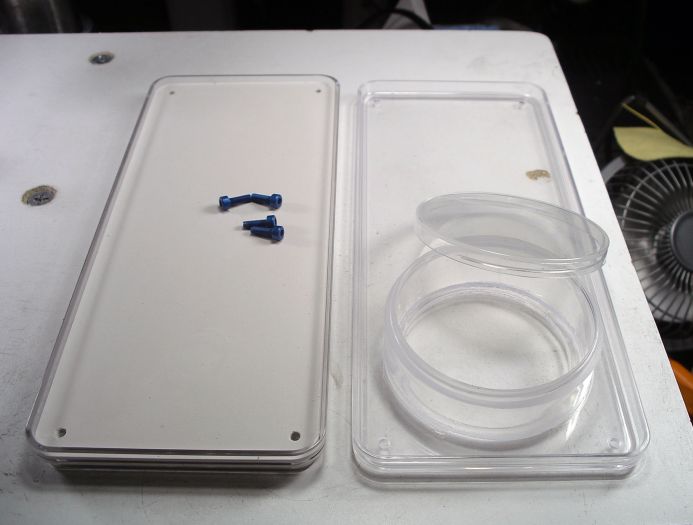 Since these are subterranean termites, I figured a white background wouldn't be that great for visibility. I tried using some activated charcoal to dye the Hydrostone a little darker. It worked for the most part, but for some reason created a strange pattern. This is the water tank that will keep the nest hydrated by wicking the water up into the Hydrostone. Here it is all put together with the substrate and wood added. Since these are small termites, there's only about a 1/8 inch gap between the panels. Hopefully this will force them to dig their chambers against the plastic. 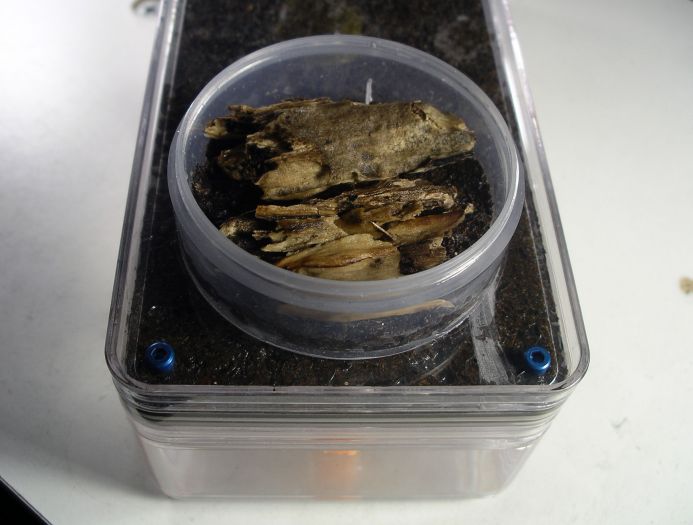 I drilled two holes in the bottom of their jar right next to some of their little trails, and I swapped out the lid with one of my open mesh lids. Hopefully they'll build some tunnels down into the foraging container and move into the nest as the jar dries out. Now to leave them be in the dark for a while.

This looks interesting.  I have even thought of using a similar setup filled with sand for some of our Myrmica species.

What plans do you have to expand the nest if they ever outgrow it, or if the substrate gets too soiled?

If I have to relocate them, I'll have to think of something similar to what I'm doing now.

The large colony has not moved into the new setup yet, but they did have a mud tube leading down into the out world. Green mold is starting to form on the pieces of rotted wood, so I dropped a few springtails in there. Once the springtails start to reproduce, they should take care of most of the mold.

I checked out my new colonies in the test tubes, and three of them have visible eggs. One had a clump of about five or so eggs, the others look like they had about three.

Here's a video of the colony with the clump of eggs. Unfortunately one of them picked the eggs up and went inside the piece of wood before I could get the camera.

One problem is the water in the test tubes is all gone now, and they'll start to dry out soon if I don't do something. I'll have to figure something out.

I taped fresh test tube setups onto the old ones, with pin holes poked in the tape between them for air. I'm hoping that as they dry out, the termites will move to the new tubes. I left enough room in the new ones this time so that the wood pieces can be farther away from the cotton plugs, keeping them from soaking up the water and drying the test tubes out prematurely. While doing this, I noticed there was a fourth colony with eggs now. You can see them in their little chamber on the bottom of the wood. One of my test tube colonies got their first nymph. I've spotted eggs in all six colonies now, and two of them have at least one nymph.

Getting the first nymph in a termite colony is always the most exciting part for me.

I don't see anything in the three small cylinder containers, except a couple of the dealates from the last bunch I put in them.

As for the test tubes, one now has eight little nymphs, two have three or so, and in the fourth test tube all I could see was one of the two dealates.


The colony in the termitarium has finally moved in, as the old jar was completely dried out. I could see a few trails with some workers walking through them. I'm pretty sure the nest is directly under the foraging area. I lifted up a couple pieces of rotted wood, and saw quite a few workers running around. I also spotted their first, or one of their first soldiers.

Very nice!  It seems that the test tube method has offered the most visibility thus far.  It will be interesting to see whether the colonies can continue to grow in that sort of setup.

I will be testing some petri dish nests this summer, if I can find Reticulitermes dealates.

What is their substrate?

I don't even remember exactly. Probably a mixture of clay dirt and some peat moss.

The wood in the foraging area has been completely consumed and broken down to powder. There's also a bunch of fungus gnats in there and lots of their larvae which is kind of annoying. I had to dump out all the powderized wood to make room for some new pieces. While dumping it out I managed to get a picture of one of the soldiers. Nice Glad to see at least one colony is doing really well!

A couple of the new pairs in the round containers now have  little colonies going.

The four new colonies in the test tubes are doing well and continuing to grow. Chromerust gave me another colony of these he had in a test tube also, only his was filled with sawdust. That colony is doing better than all of mine, and has a lot more workers.

I moved one of my test tube colonies into this little termitarium I made (or as drtmiller would call it--a box of sawdust) a while back for some dampwood termites that just ended up dying. When moving them, I noticed there was only the king or queen, and I did not see the other. I guess if the other doesn't turn up eventually, I'll just put one of the round container colonies in this thing instead. I want the ones in the test tubes to stay in the test tubes because it's so easy to observe them.

Also tagged with one or more of these keywords: desert subterranean termites, dspdrew, journal