78 replies to this topic

I caught a few California Tree Frogs and decided to make a vivarium for them. Temporarily, I just took a small 15 gallon tank, and put a few potted plants and rocks in it, along with a little fountain I got from Fry's a while back. Later I found a wild blackberry plant I liked out in the forest and took it home in a pot. I still hadn't actually planted anything yet, because this small tank was only meant to be temporary. I also found a brown Baja California Tree Frog which I decided to add to the tank too. I modified the bottom of the fountain so that it now picks the water up from the bottom of the tank instead of its little water reservoir. Here's one of the California Tree Frogs having a cricket for dinner.


Later in the spring I found tons of Baja California Tree Frog eggs and tadpoles down at some little nature preserve close to where I live.

I took home some of the eggs and put them in a container. A little later I had tons of little tadpoles. 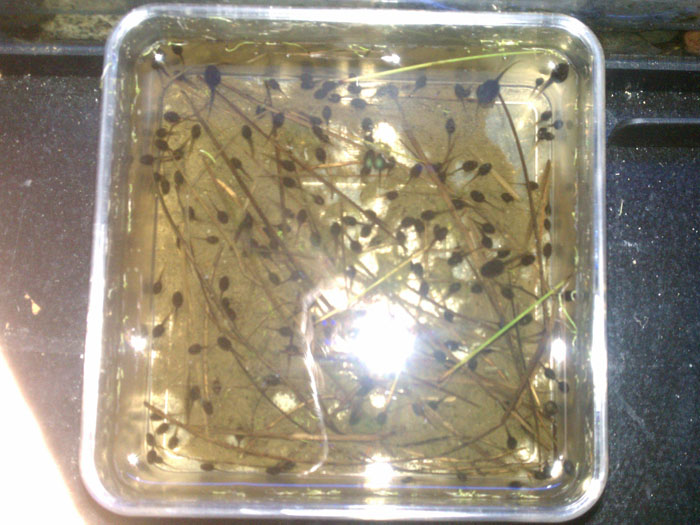 I later moved them into a really small fish tank with a rock for them climb on once they grow legs. I put some underwater plants and algae in there which they ate up real quick. I kept feeding them plants and algae until I started getting frogs. Eventually I let them all go but just one brown and one green one which I kept.

Here's a picture of the little green baby. I got rid of the fountain, and got a filtered water pump for the tank. I changed the rocks around to make a nice little pond with a bank on each side. I also found some ferns from the forest, and some Pennywort from down near the back bay and added them too. I still have everything inside this little tank, but I am planning to build the more permanent vivarium very soon. Most of the plants I had in there died by now. I did add one new plant I recently found, and I still have a few more wild blackberry plants on my porch that are still alive and well.

The froggies love the new moss covered rock I found; they sit on top of it all day long now. Omg those tree frogs are so cute. I kinda wished I lived near you so you could share.

Haha we have more than enough of them. The Baja California Tree Frogs are soooo loud though. As tiny as they are when they start making noises at certain times of the year, it wakes me up.

I put my California Newts in this paludarium also. These guys are probably the funniest little pets I have. He even plays the air guitar. I created a false bottom using some net pots and coconut fiber. 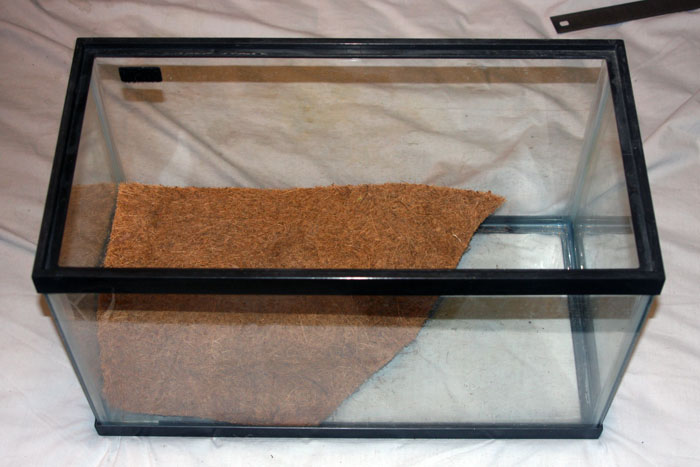 Covered it all with rocks. Added some of the moss and fern I've been growing for a long time. In this video you can see one of the newts being his clumsy self.


I hope they enjoy their new temporary home.

I see sierra newts all the time in a creek near a trail I frequently hike. I thought about taking one home but I wasn't sure how well they'd do in captivity.

Mine have done quite well in captivity. I just have to feed them by hand. They must not get to eat very often in the wild, because they are the most uncoordinated creatures I've ever seen; I don't know how they ever get a meal.

Haha, they do look a bit clumsy.

I want to start one of these, but the weather isn't exactly on my side to help me find tadpoles, with the whole drought and everything...

Just go to where the creeks still have water in them.

Just go to where the creeks still have water in them.

Yeah... There isn't any of that around my area anymore, the drought hit this area hard. Closest I can think of is maybe somewhere up in the mountains by Castaic.

Any update on this?

ROLF at 1:30 of the last video. I actually laughed.

Any update on this?

I can get some pictures. It's changed a bit over the months--the different plants and all. I haven't done any more work on my big one yet.

ROLF at 1:30 of the last video. I actually laughed.

Yeah newts are pretty clumsy and funny to watch sometimes.

How big is that tank you used? Do you change the water frequently, or does that waterfall thing also filter?

It's just a little 10 gallon. The waterfall thing is a filter, yes. I don't change or clean anything really, other than the filter from time to time. Everything in this is pretty much cleaned by one organism or another. It's a little self-sustaining ecosystem basically. Aside from the frogs, newts and fish, there are springtails, non-parasitic mites, white worms, non-parasitic flatworms, snails, and more. Frog turds are gone in two days; they make a yummy meal for some of these creatures.

Thanks.  I'm thinking of doing something similar soon with a 29 gallon tank.  How do you keep the temperature down in the summer?  I've found that newts can't tolerate the water to be warmer than room temperature for long.

Well, I hadn't. It gets in the 90's inside that aquarium. I found that the lights, even though fluorescent, are still causing a lot of the heat, so I'm going to try to do something about that. But yes, California newts are supposed to stay around room temperature.

Maybe some more ventilation is needed? Evaporation is great at cooling.  You could also invest in an aquarium chiller. You'd probably need one for the bigger tank anyway.

I really like newts but the fact that my house gets up to the 90s in the summer has always hindered me from keeping them.

Yeah, ventilation would definitely help, but then the moss wouldn't grow. Even the way it is, I can barely keep moss alive in there, while it grew like crazy in a little greenhouse tray I had that was always 100 percent RH. I thought about a chiller. Maybe I'll look into that. Up in Trabuco Canyon where I caught them, it's in the 90's quite frequently during the summer. Not sure what temperature the water is though. I should check it some time.

I got home from work today, and found the whole gang posing for a picture. Back to Off-Topic Journals