36 replies to this topic

Fungus Growers! Everybody loves em, so here I am to flex mine on you all.

On September first, I caught a pretty sizeable A. versicolor flight about 30 miles south of Tucson, AZ. I ended up collecting 95 queens total. Here's a video of the flight:


I did have a few deaths overnight, but I'm still left with right around 90 queens total. This journal will be following the most successful group, AKA the one I'm keeping for myself. I'll be selling all the rest.

After the flight, I placed groups of 5 or so queens into the setups I had made; just a deli cup with around 1cm of plaster of paris at the bottom. It works great for pretty much any fungus grower I know. Either way, I was delighted to see this group had multiple fungus pellets placed right on the wall of the container. Yes, the little brown dot is what a fungal pellet looks like at first. 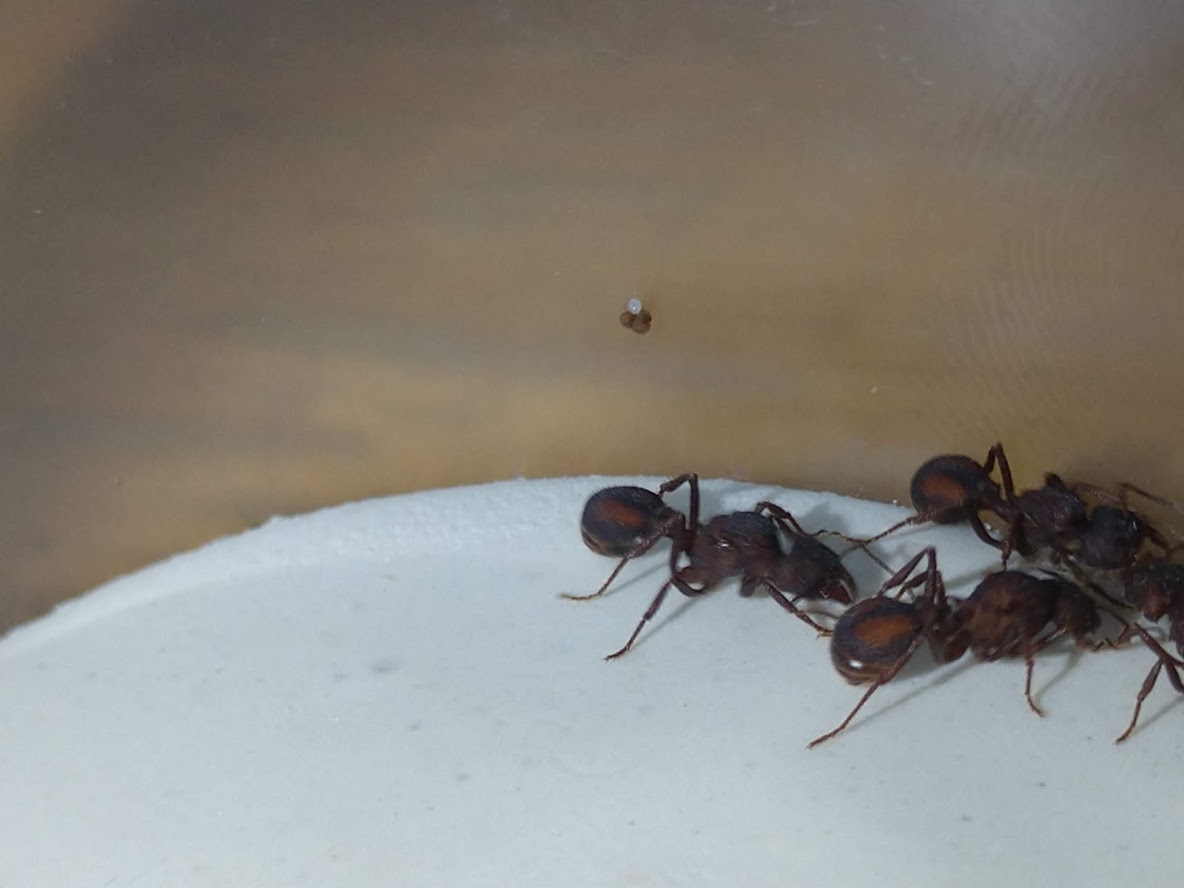 After offering some food, I checked back a few days later to see some pretty nice fungal growth. I was relieved to see that this group was doing well, as the majority of the others' fungus had failed. I will end up boosting the others once I get more fungus to offer. I decided to just keep offering food as long as the ants were taking it, and it definitely worked. This picture was taken two days after the last. The brown material is dried flower petals, for those wondering. Acromyrmex versicolor tend to use flowers to feed their fungus quite a lot, arguably even more than they use leaves, so long as they get the chance.

A few days later, the fungus had gotten even larger still, and they'd even expanded to make a miniature second garden next to the first. I don't know what their intention with this was, but they definitely did it. I guess I'll just wait and see. With the fungus now being larger than the size of all 4 queens, I'm confident this group will do well. Confident enough to make a journal, at least. 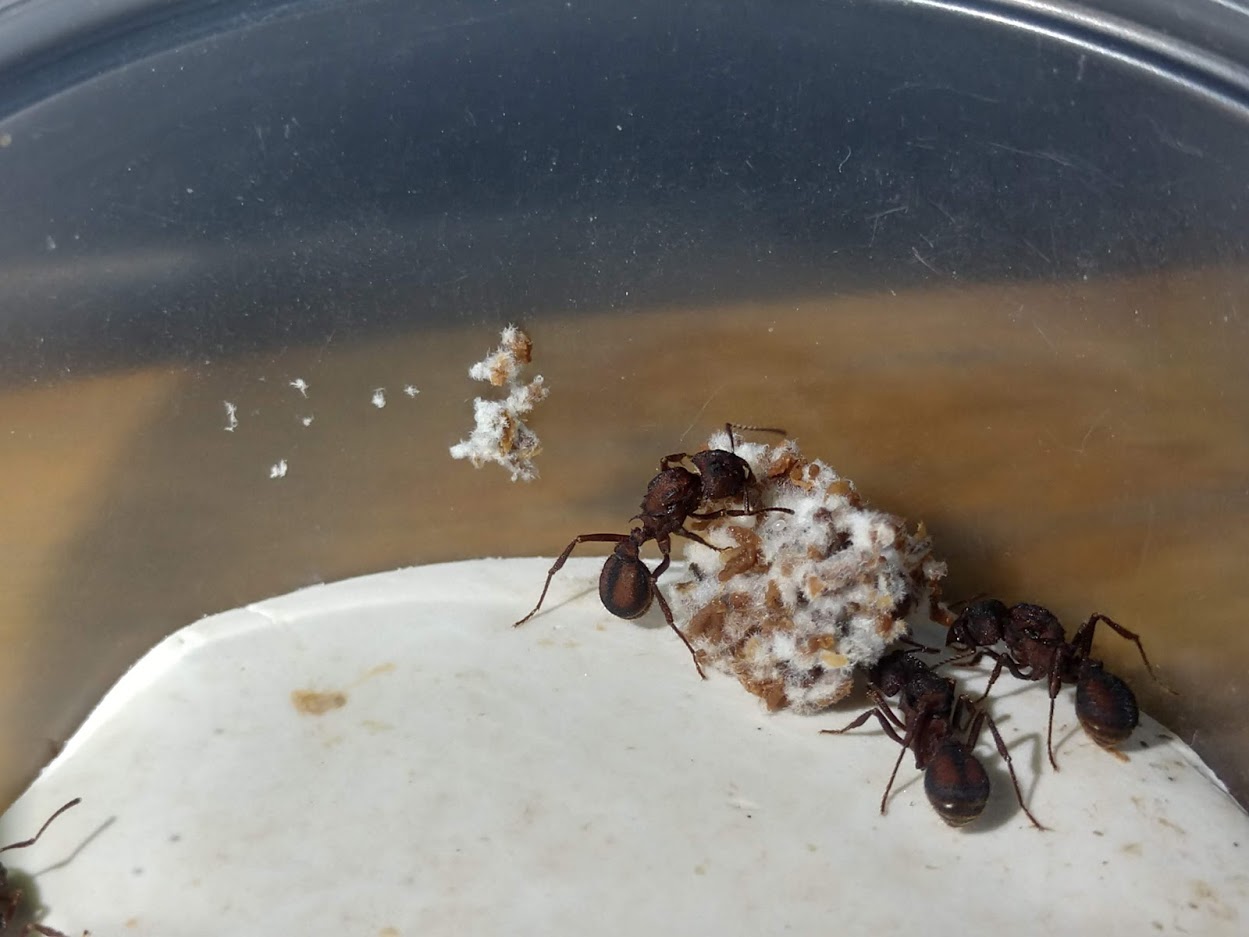 This is amazing. You do be flexing!

95 Acromyrmex v. queens...Why do I live in Cali... Would like to see your founding setups.

So I've heard, and seen in your journal. I'm considering making a setup with a low lid so they can hang the fungus. But that'll come once the deli cup becomes unsuitable. For now it seems to be working just fine, so I'm just gonna keep with it.

After taking a bit more food, they've started developing the fungus to almost have some real structure to it. They're starting to build a few pockets in it, and they've even gone and placed their eggs inside of them. I'm sure I'll probably see some larvae soon, although I know Acromyrmex versicolor have a pretty slow egg to worker development time. Anyways, I decided to take a quick video. Most of the queens were just hiding behind the fungus, but you can get an idea of how they're doing.

I would totally buy if I was in AZ.

Today I noticed the first larva in this group. None of my others have any that I can see yet, although that may be attributed to the fact that this group's fungus is significantly larger than any of the others. I do believe that Acromyrmex wait until the fungus is of a certain size before allowing any eggs to hatch into larvae. Either way, I'm excited to see the appearance of larvae in this group, as it means all is going well with them. Their fungus has also grown quite a bit more after feeding them some dried rose petals. So far it definitely seems that dried flower petals are their favorites. I wish I had these.

you need someone to cultivate some extra fungus for you? i grow culinary mushrooms, and i would love to see how this stuff will grow on agar (a gel like growing medium in a sterile petri dish"

you need someone to cultivate some extra fungus for you? i grow culinary mushrooms, and i would love to see how this stuff will grow on agar (a gel like growing medium in a sterile petri dish"

As awesome as this would be, higher attine fungus is unable to survive without the ants present. The ants not only feed the fungus, but also remove wastes from the fungus and spread around spores to promote growth. Without this happening, the fungus could not survive. You could theoretically cultivate the fungus of some lower attines, but unfortunately I am extremely doubtful that Acromyrmex fungus could survive at all without the ants, even in a lab setting.

Dude these are super cool

This is a completely unexpected update. I have no idea what is up with this group, but only 5 days after getting larvae they are already in premolt. Compared to everything else I've seen with Acromyrmex, this is absurdly fast. They are not being heated, so I have no idea what is causing this growth other than the fact that the fungus is very healthy and growing quickly. I was expecting to wait upwards of 8 weeks for workers, but with pupae appearing after only 3, I'm expecting a total egg to worker of less than 6 weeks, at least for this group. My 2 other best groups also have larvae, but none that have developed fully yet. I also have another question, for those who may know. Antwiki claims that A. versicolor are polygynous, but then go on to mention pleometrosis later on the page. I have also heard from others that they are pleo. Can anyone verify if they will stay functionally polygynous or not? I feel like it'd be good to know.

actually, the fungus is just mycelium, and doesnt produce spores. the spores come from the fruiting bodies (mushrooms). and I'm not sure any fungus really produces a waste that will bother them. i could be wrong, however. the way they are propagated is just by basically removing some of the mycelia and offering it nutrients. i heard someone else mention enzymes that the ants provide, but I'm not sure if that is a theory or a fact. anyways, if you are interested in trying it, it would only take a small sample. it would need to be shipped later, as most mycelium does not fare well above like 94-96f if memory serves. and its still 110f where i live. and, the reason why youre seeing the growth you mentioned could be due to the fact that mycelium creates a decent amount of heat when its growing. i think that might be a reason the ants put their brood in it. is the colony with the faster growth also the one with the bigger fungus "ball"?

AWESOME colony!!! Wish i had those up here!!

Learn about our website AntsDakota, and help us develop and publish it!

Join our Discord, where you can discuss your anting ideas in peace!

As of a few days ago, these ladies did get their first pupa. The larva took about 3 days in premolt, which is funny because it only took 5 days to reach premolt. Still, only around 1 week total for the larval stage is absolutely crazy to me. This group is still doing great, eating just about anything I offer them. I'm considering adding an outworld for them, as adding food directly to the container causes it to spoil from the humidity in only a few hours.