28 replies to this topic

this journal will feature another colony of mine, my young but very active Lasius niger colony.

This species is the species that got me into ant keeping and will always have a special place in my heart.

Just a few Infos about this species:

queen: usually one per colony, 8-9mm long and black with a brownish shine
workers: 3-5mm large, black or dark brown

colony size: around 50.000, large colonies are very aggressive and will often attack and kill other colonies in their territory
habitat: open meadows, especially abundant in city areas, often nest under sidewalk plates and stones

I got this colony from a friend of mine ho sadly had to give up ant keeping. I gladly took them.
They are currently being kept in a small plastic container with a test-tube and 8cm of sand.

They keep some of their brood in the test tube and some (mostly bigger larvae) in the dirt nest.
I am not really a fan of this setup so I plan to move them into a homemade plaster nest with a glass outworld. First I am going to let the sand dry out, so the ants will move all of their brood into the test tube which I am then going to put into the new setup, once it's finished. I am still in the planning phase and waiting on a few packages from AntStore.

But now need to rush since the colony is thriving right now and as you can see the queen is laying loads of eggs.

All this brood needs to feed too, so they have quite an appetite.
This is the normal recruitment whenever I give them something to eat.

I mostly feed them flies, red runner roaches, mealworms as well as crickets. For carbohydrates, they have 24/7 access to diluted maple syrup which they really like.

This colonie is really fun to keep and quickly captured my heart. This really takes me back to the roots, to when I first started ant keeping.

The next update will probably follow once I have their new setup build and a better overview of how large the colony is.

Yes, they are awesome. Sadly here in Germany, they have kind of a bad reputation as a boring starter species which does them a total disservice.

Yes, they are awesome. Sadly here in Germany, they have kind of a bad reputation as a boring starter species which does them a total disservice.

It's the same here. Lasius neoniger and americanus are super common around here, yet are also considered boring starter species. Yet I just love how large they grow. In the right areas, I can flip over rocks, and there are thousands of workers and brood underneath. Yesterday I took advantage of this and got a massive amount of workers for my parasitic colony. And another thing, I love how their queens get physogastric: 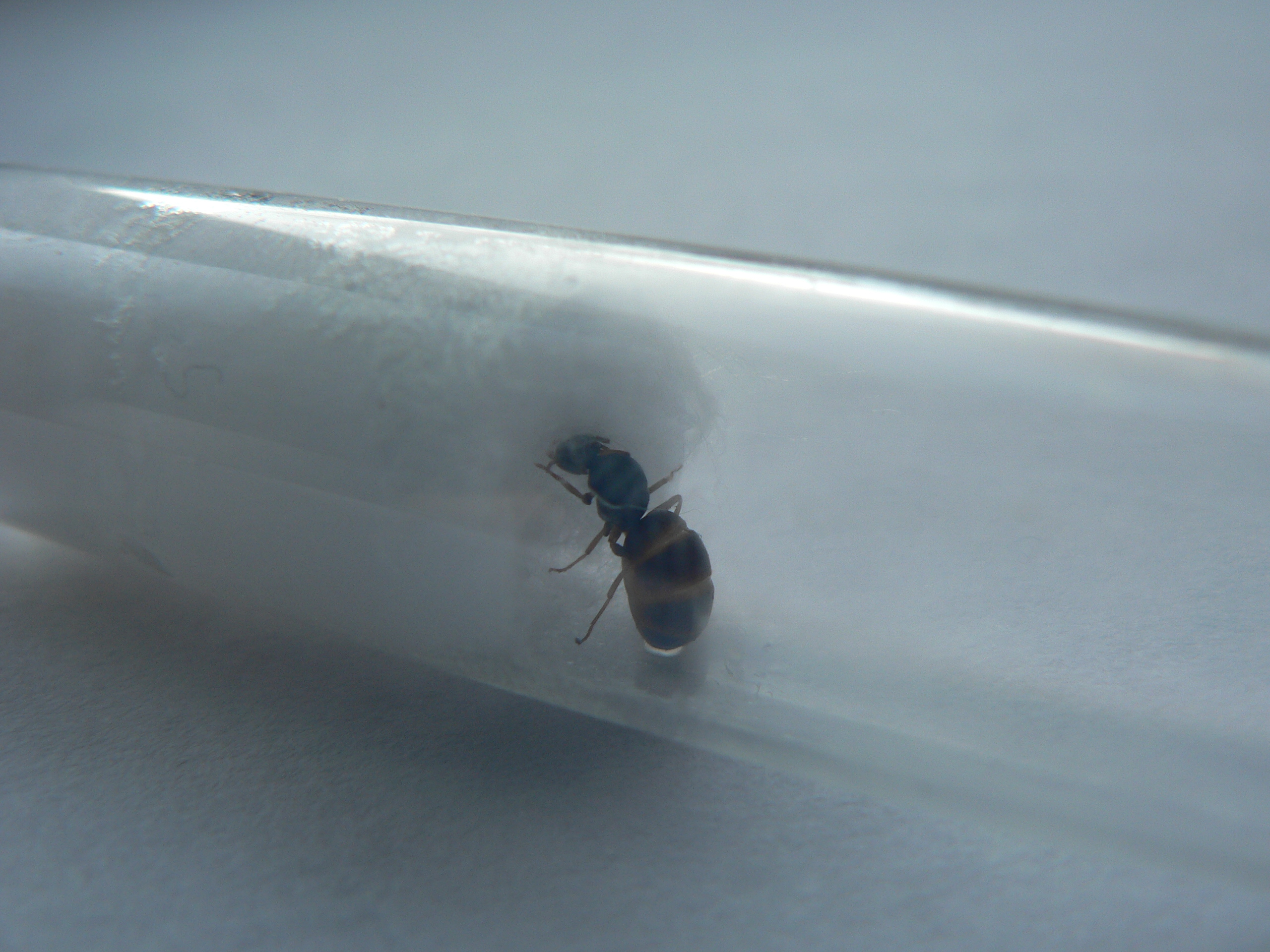 I love that about them too.
Good luck with your parasitic colony.

Today I feed them a small cricket. Not their favourite food but they still drag it into their tunnels.

Flys are still their preferred food.

I also switched out their maple syrup (it started to leak) with some invert sugar for now just a drop. Once I clean out the ByFormica Feeder it will get filled up with that stuff.

Seems like my kinda ants to keep! Very cool.

Lasius just doesnt seem to get the love on here. They're very common where I'm from but I always have a hard time getting them through the winter.

I actually just stumbled upon a Lasius americanus colony, which is more niger-like. Hoping she’ll be as productive as yours. If you wish you can read more about them in my journal.

I actually just stumbled upon a Lasius americanus colony, which is more niger-like. Hoping she’ll be as productive as yours. If you wish you can read more about them in my journal.

I am definitely going to follow that journal. Good luck with her.

The colony has now moved out of their old setup into a new 3d printed nest. Its a bit too large for them but I am sure they will fill it up quickly.

They have been consuming loads of insects (mostly mealworms and crickets) and sugar water. The brood pile is growing on a steady rate and new workers are emerging almost daily.

However I am still waiting on their new glass outworld, but once that arrives I will present the complete setup.

A small pile of pupae with a new worker, they have more but those are hidden under condensation.

And a few larvae, still more hidden behind condensation.

And I still can't get over the number of eggs in that first picture!!!

Join our Discord, where you can discuss your anting ideas in peace, and learn more about AntsDakota.com

Well, today they finally got their new outworld. For now, it is a 30cm * 20cm * 20cm tank, which was originally intended for my Camponotus cruentatus but those have no need for it anymore.

The nest is attached via about 25cm of tubing, the ants really use the extra space and ts so interesting to watch them drag prey through the tubes.

The colony is growing extremely fast due to the warm temperatures in my room (about 28°C).
They hit the 100+ mark and are now more aggressive than ever. They even started taking live food (not on purpose) a fly landed in their outworld near the sugar water test tube and the ants quickly swarmed the fly and took it down in a matter of seconds.

The queen slowed down a bit with egg production so most of their brood are now pupae.

Time for an Update!!

The colonie is doing great, they´re growth slowed down ab it since I was on vacation for two weeks. During this time they only got proteins once a week, but now that I'm back they will be fed daily again.

I'll try and get some pictures this week.

My little murder dwarfs are doing great.
They have been hungry as always and take anything I throw in there be it flies, roaches, crickets or mealworms.
Their recruitment is really fast and great usually around 50-60 come rushing out to defend their food source. Recently when I gave them some beetle jelly, a wasp came in through a open window looking for an easy snack, landed next to the jelly and the ants lost their [censored]. Three chased it away again and again while 2 ran back to get support. A few seconds later about 60 ants rushed out of the nest and quickly swarmed the wasp. Sadly the light was really bad so I didn't get any good pictures.

However, of what I did get pictures off was their reaction to an adult dubia male.

IMG_8636.jpg   234.57KB   0 downloads
They knawed on this for about 12 hours after that is was completely hollowed out and all the legs cut off.
After that, they were completely full for two days and had no activity in the outworld.

But dubias aren't the only thing they go for, they really like cut-up mealworms.

Of course, proteins aren't the only thing they crave. I finally got around to order some more BYFormica Feeders so they now have better access to their sugar water.

IMG_8648.jpg   304.17KB   0 downloads
This is the usual activity at the feeder, there are always some ants gorging themselves and then stumbling back into the nest only to return a few minutes later to fill themselves up again.


That's it for today, so until next time

I want some non-parasitic lasius.

I want some non-parasitic lasius.

Come to Scotland XD Lasius Niger are still flying about right now, I kinda went mad catching a lot of them, but I had no idea what the survival rates would be. So far pretty high.

These girls are still going strong and make no signs of slowing down for winter.
There is still loads of activity in the outworld, they are as hungry as ever.

They empty these small ByFormica Feeders within 3-4 days, I definitely need to upgrade those next year. I only use them for sugar water, with normal water they wouldn't last two days. They get they're drinking water from a small test tube laying int the outworld, this lasts them about 2 weeks

For proteins, they now get mostly red runner roaches (1 male per day), frozen and the cut-up. As well as the occasional annoying fly or mosquito.
They still try their best to drag those into the nest but often fail at the connector so they just cut off limbs and hollow out the rest.


All that food is getting put to good use, the queen has produced two large egg piles with several hundred eggs per pile.


The colony has grown a lot, I didn't have the patience to count all the workers so I just estimated the amount, my guess is that there are around 800.
They are starting to fill up the nest. There is brood in every chamber, over hibernation they are also getting an Upgrade.

An interesting behaviour I noticed is that they don't like to lay their larvae on the steel mesh and actively avoid it.

it pains me to think about that their active season is coming to a close, at the end of September I'm gonna reduce temperature and food so that they will be in hibernation mode by mid-October.
Then they will put into the fridge and left alone until Easter apart from a few short checkups to ensure that their nest is still moist.

Until then, have a great time

Great work with the colony! Couldn’t you take them out sooner than Easter if you miss them?

Also tagged with one or more of these keywords: lasius, european, gardenant