33 replies to this topic

Crematogaster minutissima is a small, yellow species found in most southern US states and further south into Mexico. C. minutissima is highly polygynous and some antkeepers have observed the alates in their colonies having "nuptial flights" inside the outworld and mated females returning back to the nest as new egg-laying queens. They produce a caste of larger "intermediate" workers that lay trophic eggs which are fed to the larvae and queens.

On July 8, 2019, I received two of these queens from SuperFrank. They were in the same test tube and had a few eggs that had been scattered around. Their test tube had sand in it, so it was hard to see much. A few weeks went by and I could no longer see any eggs so I just assumed they failed at founding and were basically doomed.

After I stopped seeing their eggs and the queens buried themselves into the sand, I stopped checking on them because I did not expect anything to come from it. Today I decided to check and see if they were still alive, and I was surprised to see a single worker running around in there with them inside a chamber in the sand. I dumped the sand out of their tube and moved them into a new tube. Both queens are still alive, and they have just one worker and one pupa. I quickly gave them some sugar/syrup water because I haven't fed them in the 2.5 months that I've had them. 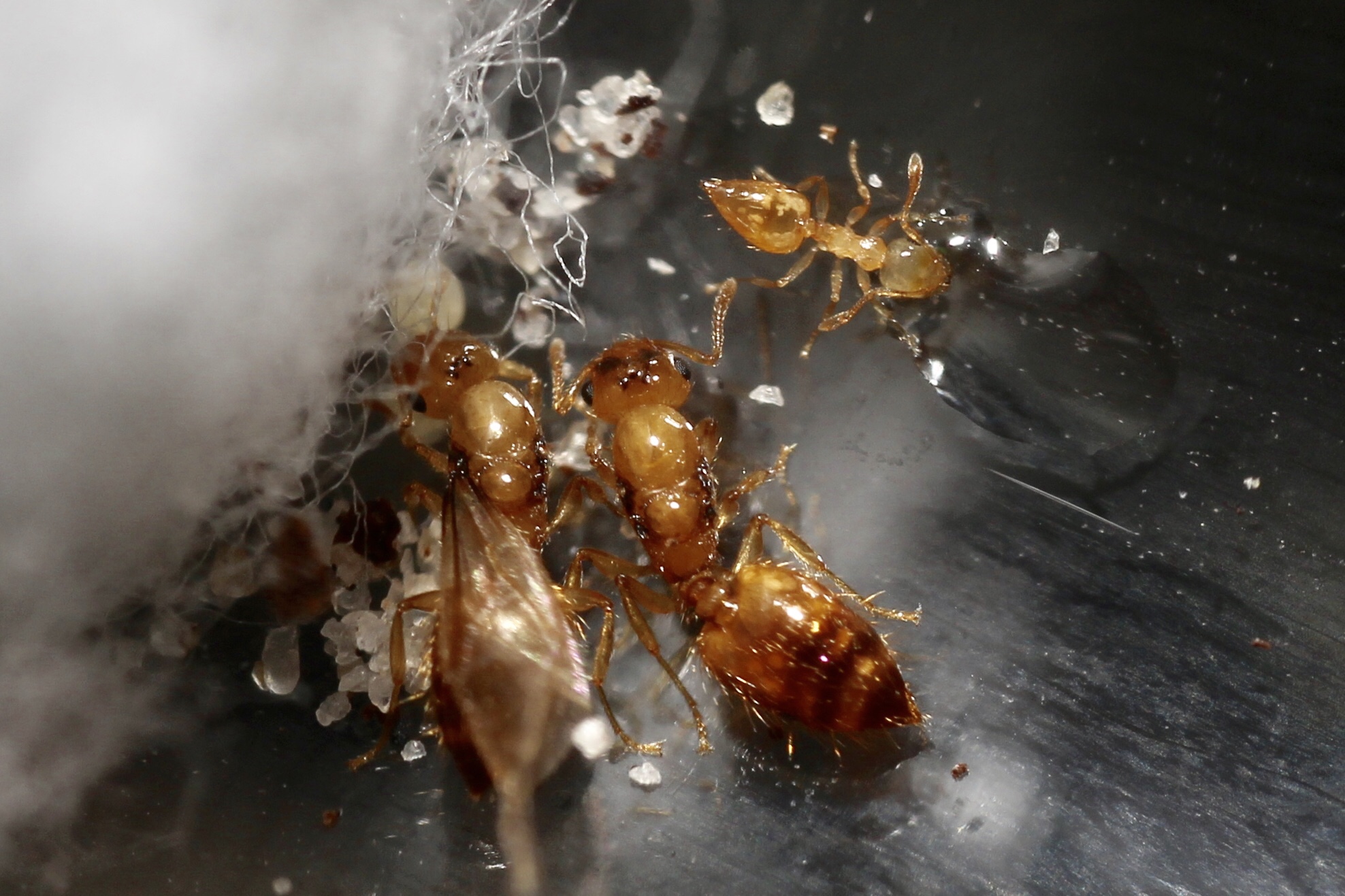 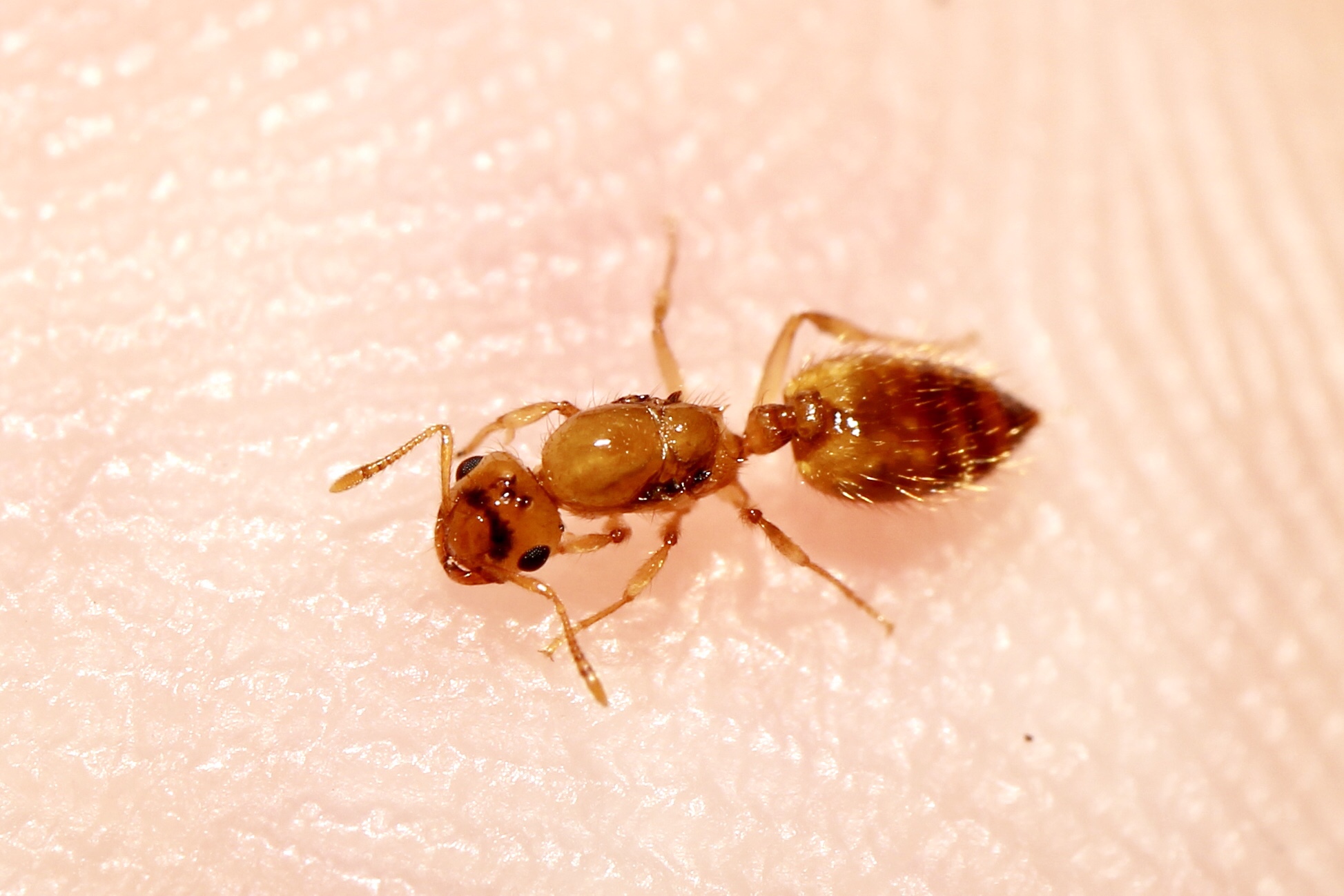 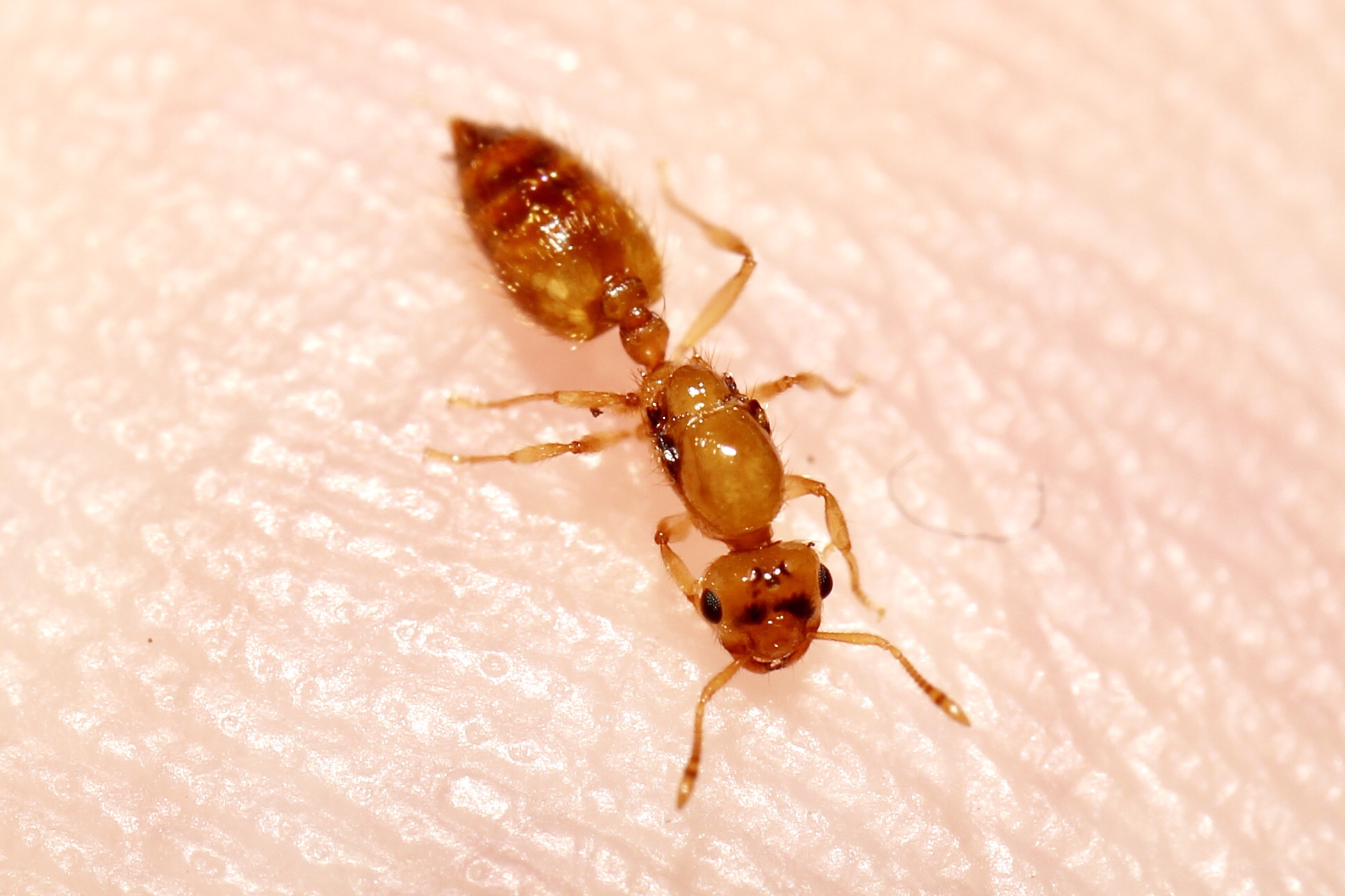 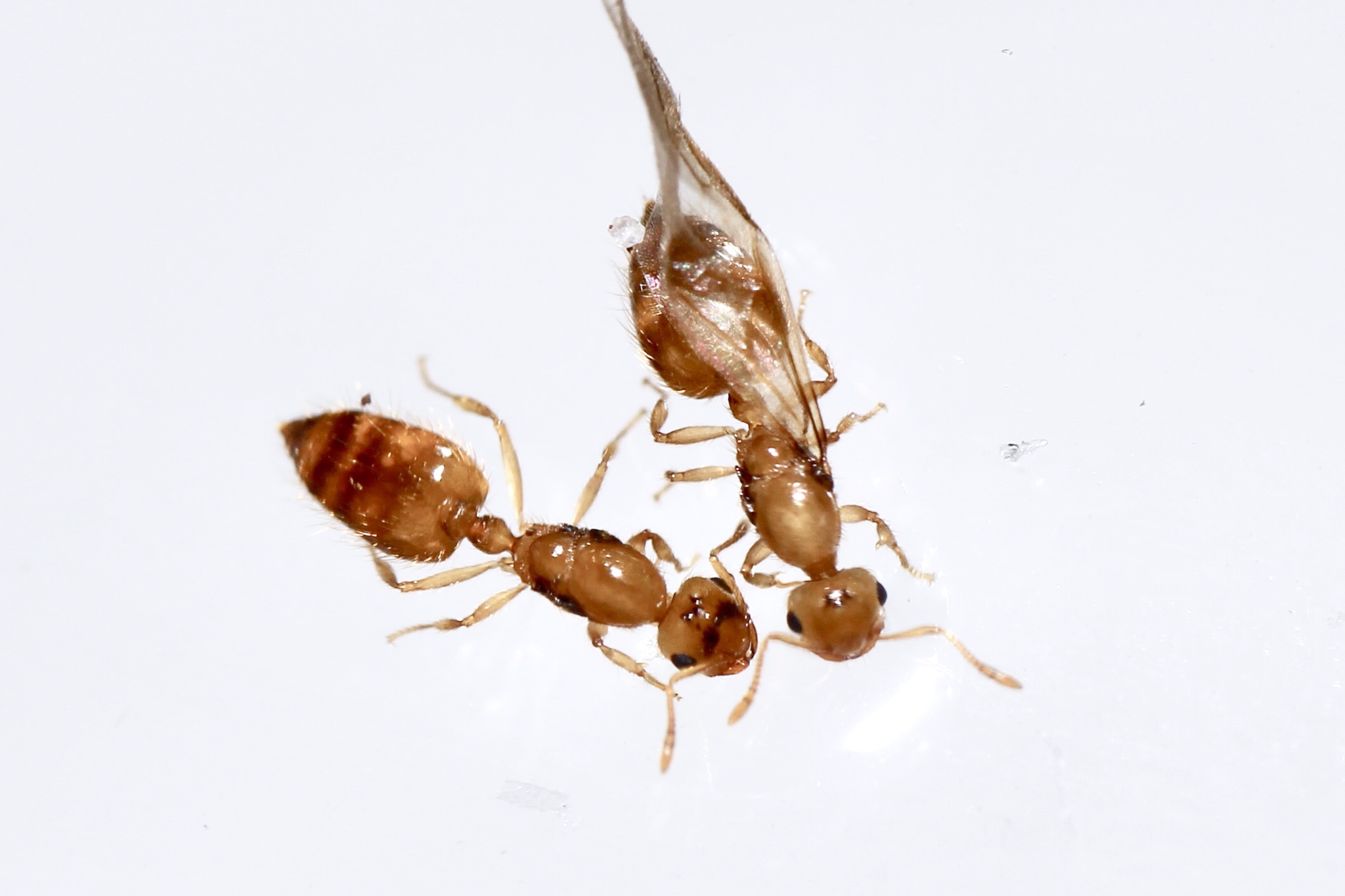 Awesome! Two years ago I had a wild collected colony of these. I lived on a large piece of land and located colonies of both the polygynous and non-polygynous species. It took a while but I was able to tell the two species apart by their very few physic differences. My colony had around 15 queens and 250 workers, all collected from about 7 separate wild colonies. And yes, when I tried to introduce C. missouriensis ​queens to the setup then they were always killed.

Although they are typically seen foraging right at sunset and into the night, my colony was entirely diurnal. By far the most fascinating thing about these ants is how synchronized their movements are. They look like water when they walk together in large groups. You'll see what I mean once your colony gets larger.

The second worker has eclosed and there is a nice batch of eggs now.

Some eggs are starting to hatch. One thing rather remarkable about this species is the size of the eggs relative to the ants themselves. For how tiny these ants are, their eggs are huge. Yet, they still manage to pump out a decent amount. 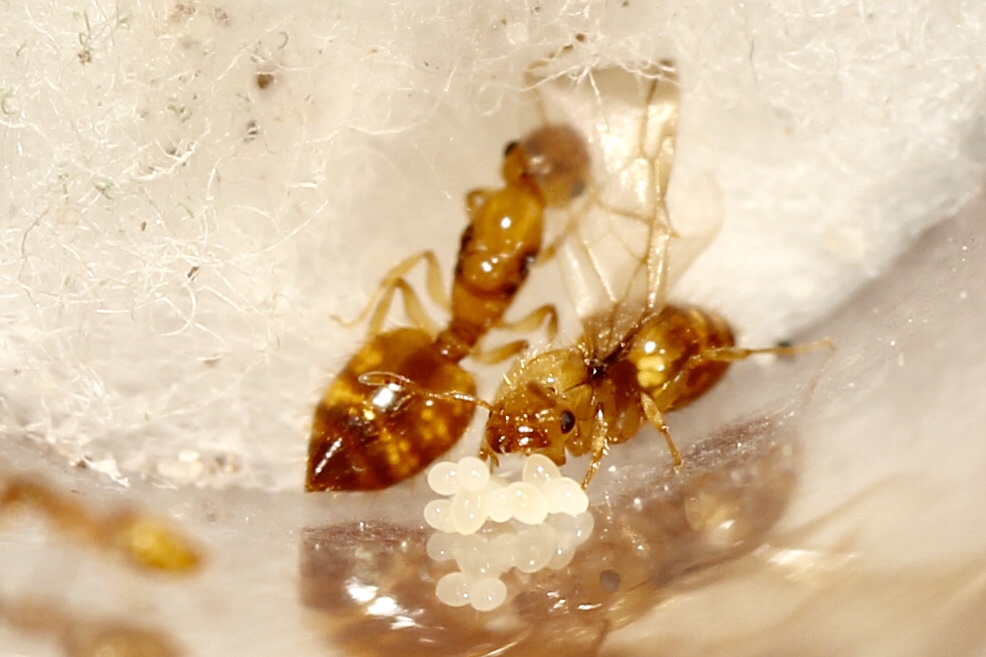 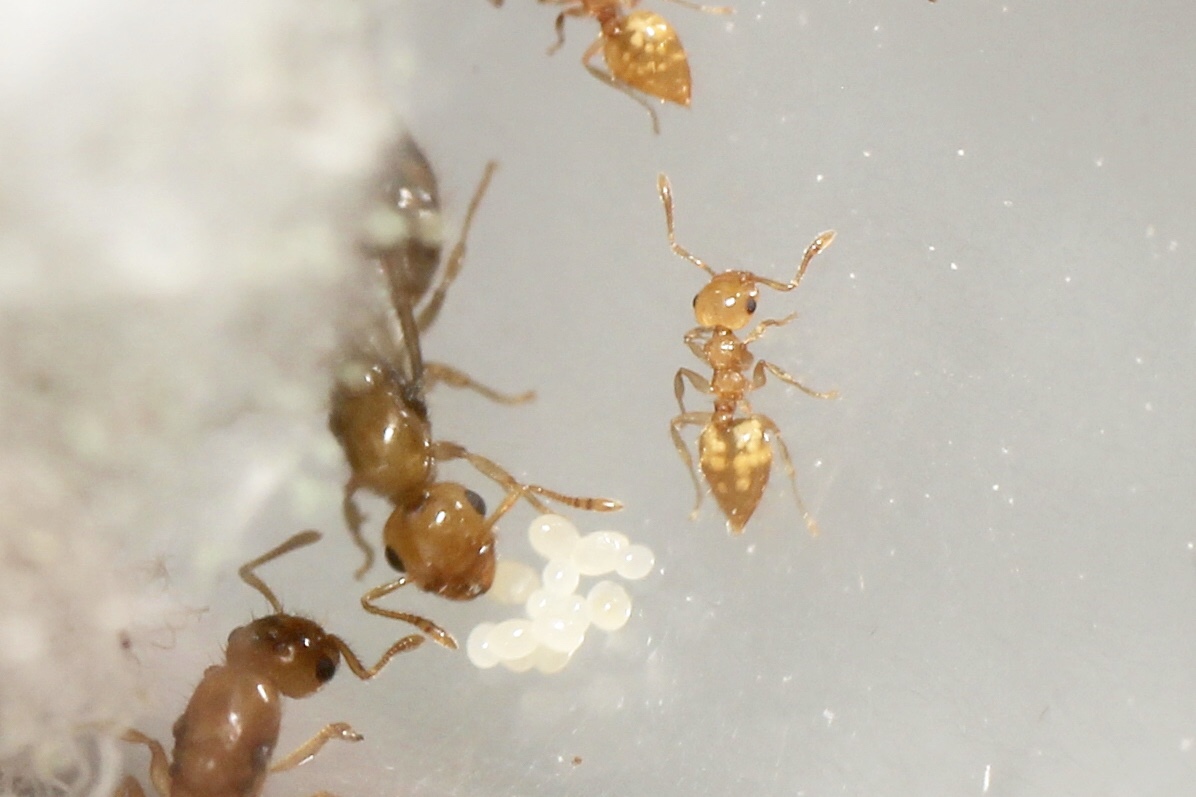 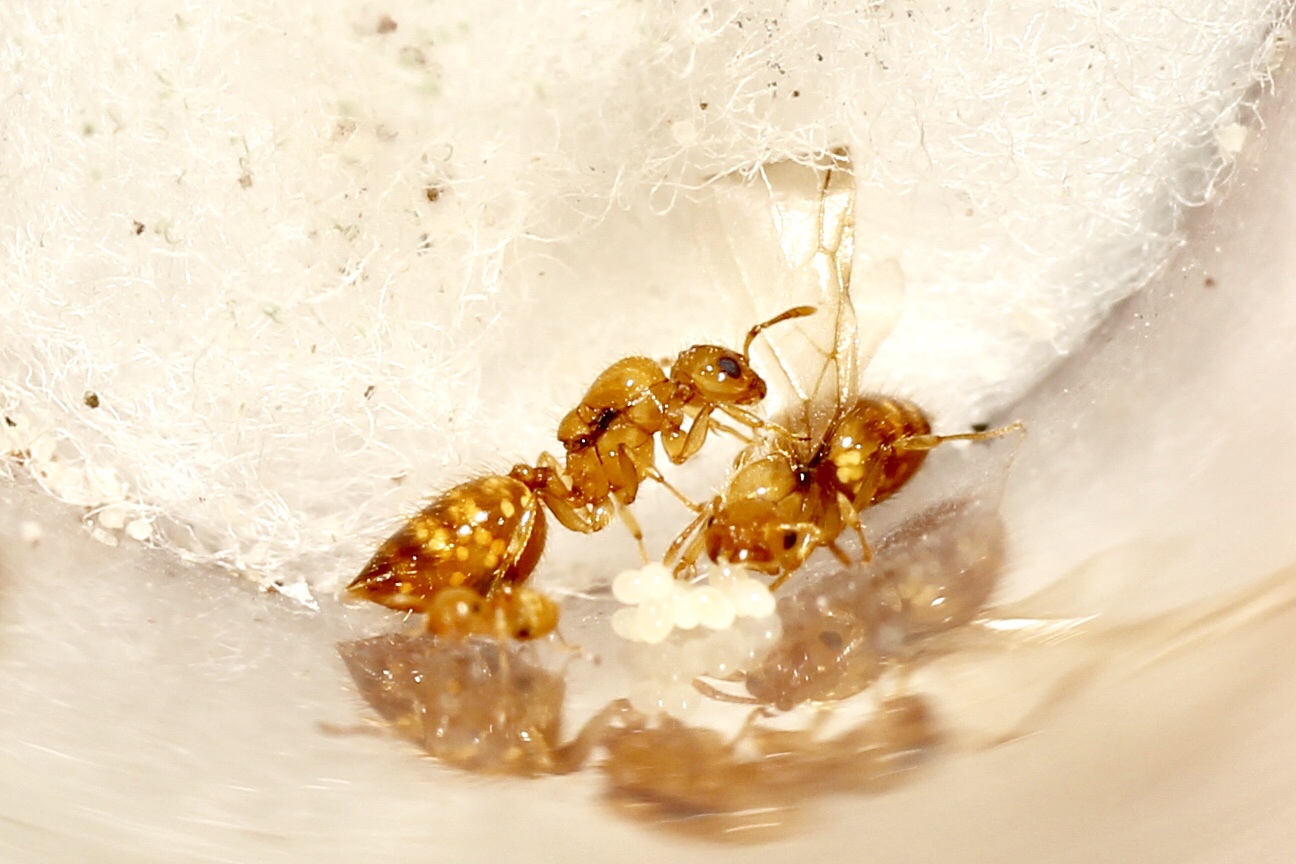 I don't think they're eggs, as the workers have those little white spots too. Not sure what they are though.

I think those are just markings. You can see them on every ant in every picture. Cool.

By the way, these are C. minutissima. For one, missouriensis is not known to be polygynous, being strictly monogynous. In addition to that, missouriensis has a distinctly granulate mesosoma.

In the early morning of May 28, a few days ago, I found several Crematogaster minutissima queens on my own for the first time. Of the 8 queens I found that morning, 3 of them were noticeably smaller than the other 5. I wondered if I could have both minutissima and missouriensis, but I think a true missouriensis queen would be larger and look more distinct, so I am considering it to be size variation within minutissima. 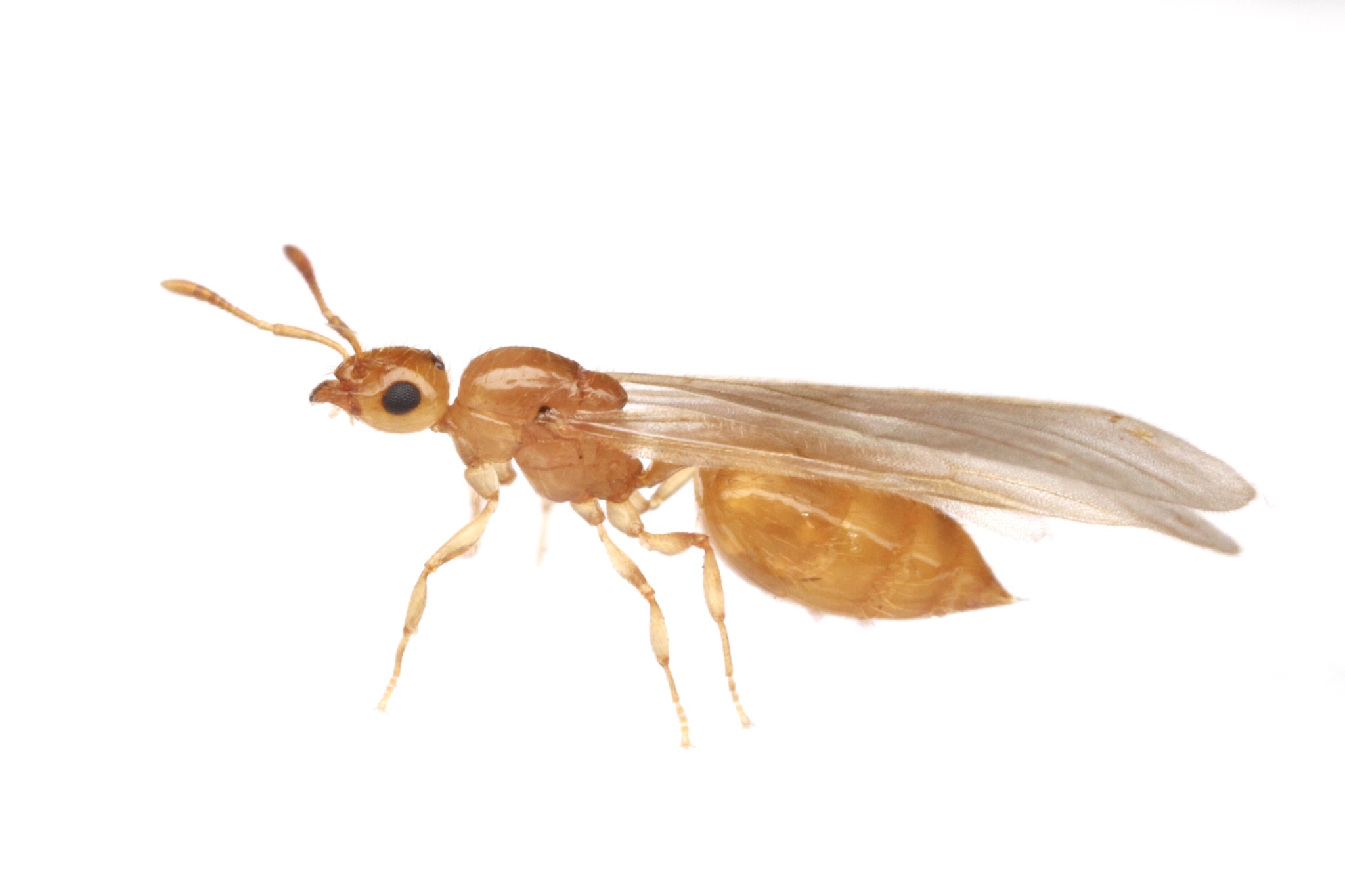 Here is the progress of the 6-queen group (I added another queen that I found yesterday while in the woods). The 3-queen group, not pictured, does not have any eggs yet but two of the queens have shed their wings.

Look at those giant eggs! 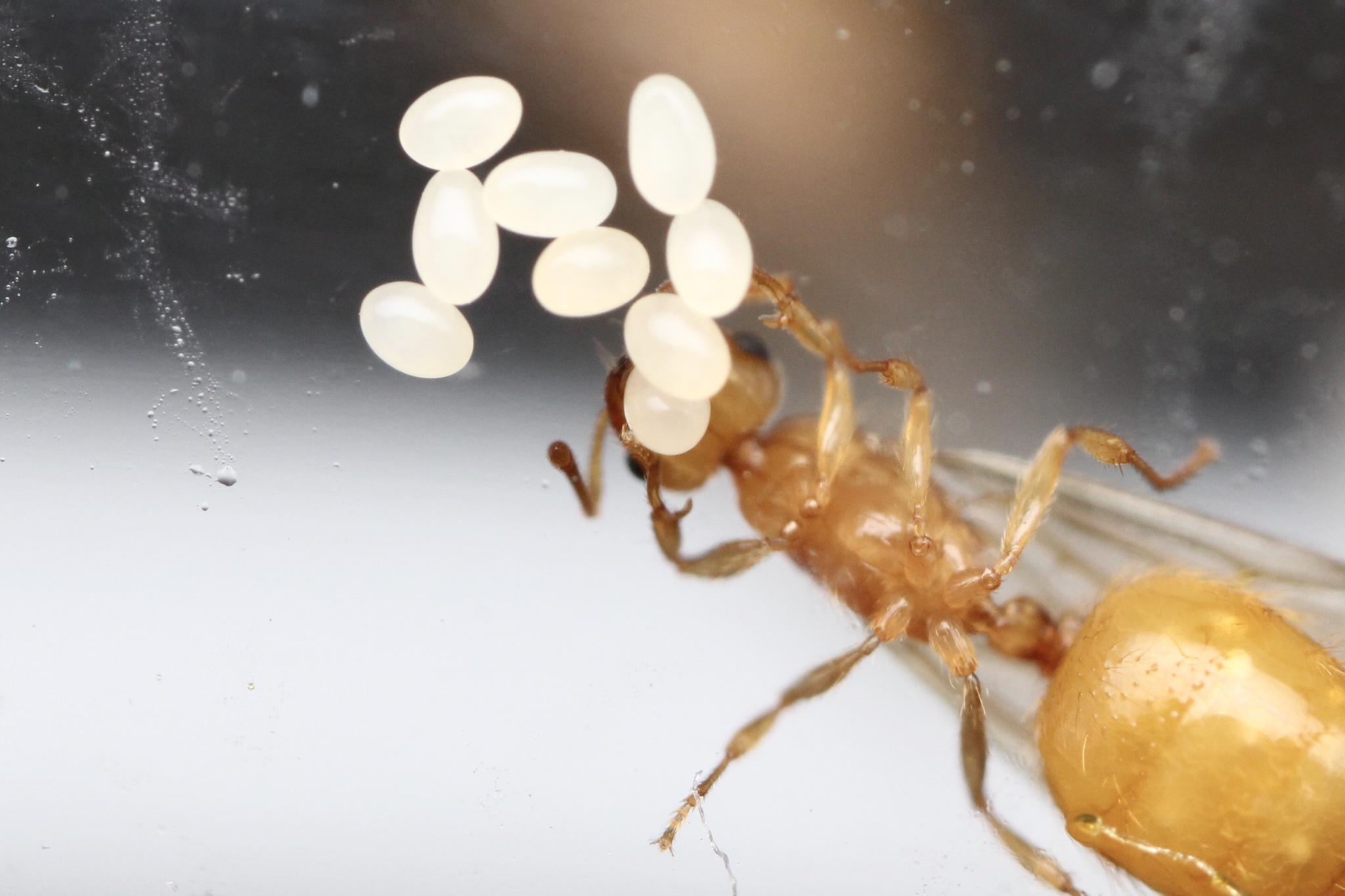 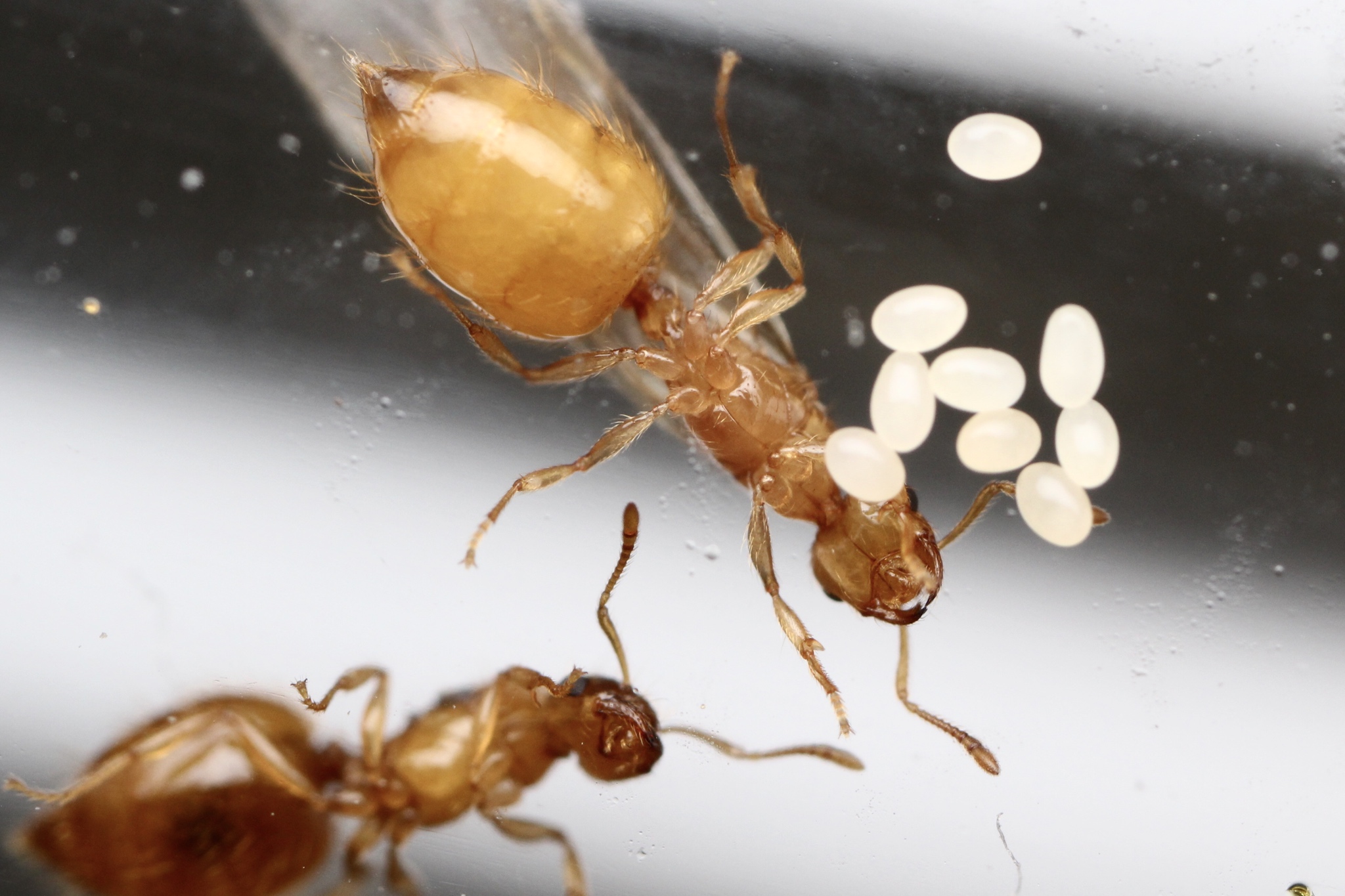 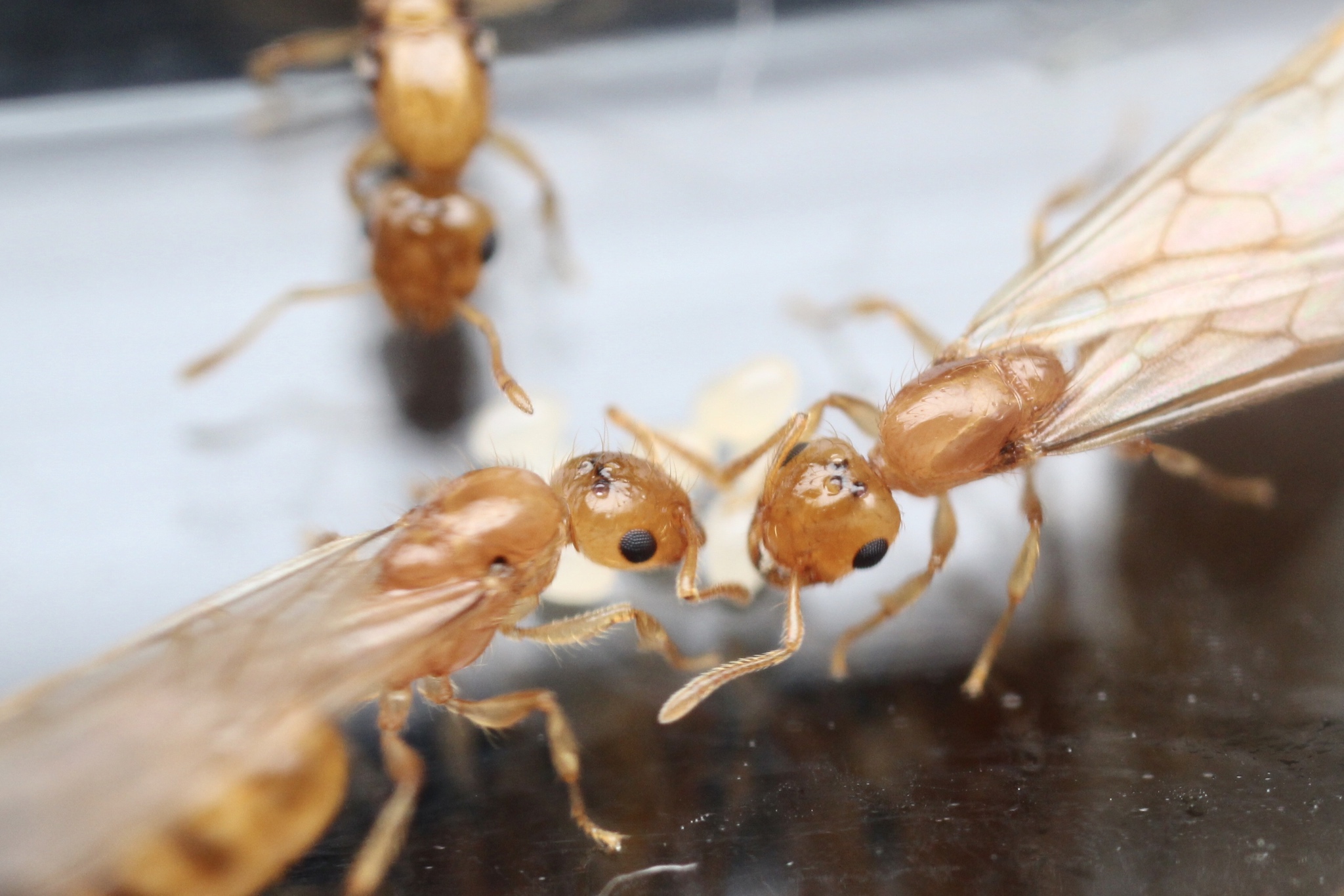 Those are gorgeous ants! Great pics and appreciate the journal. Thanks.

I've been catching more Crematogaster minutissima queens, but for this journal I will only be closely following the progress of two groups, each with 6 queens. One group, the group with the larger queens, which were pictured in the last update, and another group of smaller queens which had only 3 queens in the last update but now has 6 as I have caught more.

Here is the first group from the last update. Only 1 out of the 6 queens are dealated, and their first larvae have begun to hatch. I am still not certain that these larger queens are actually minutissima, because they are clearly larger than the queens in the other group and even appear to have larger eggs than them. 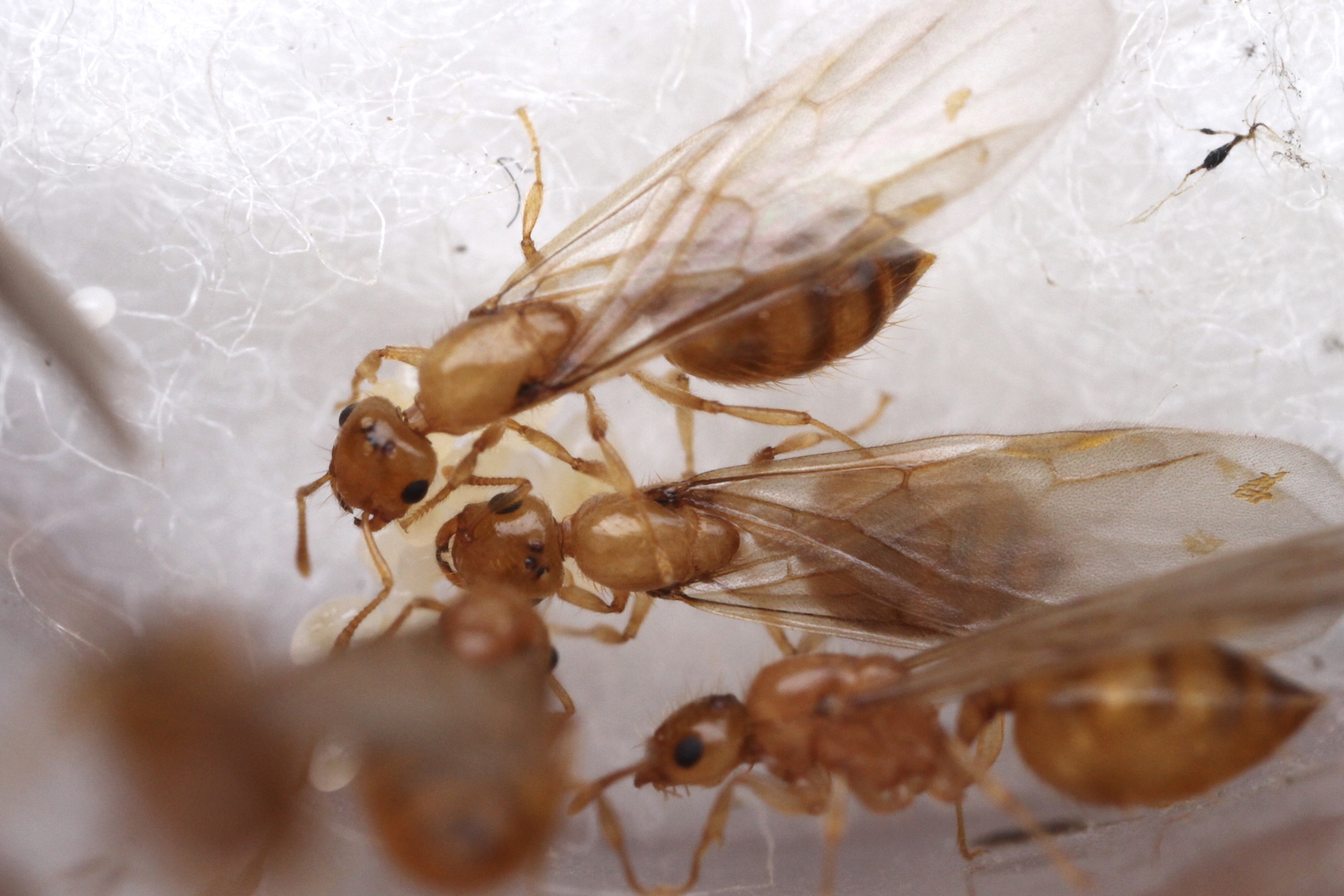 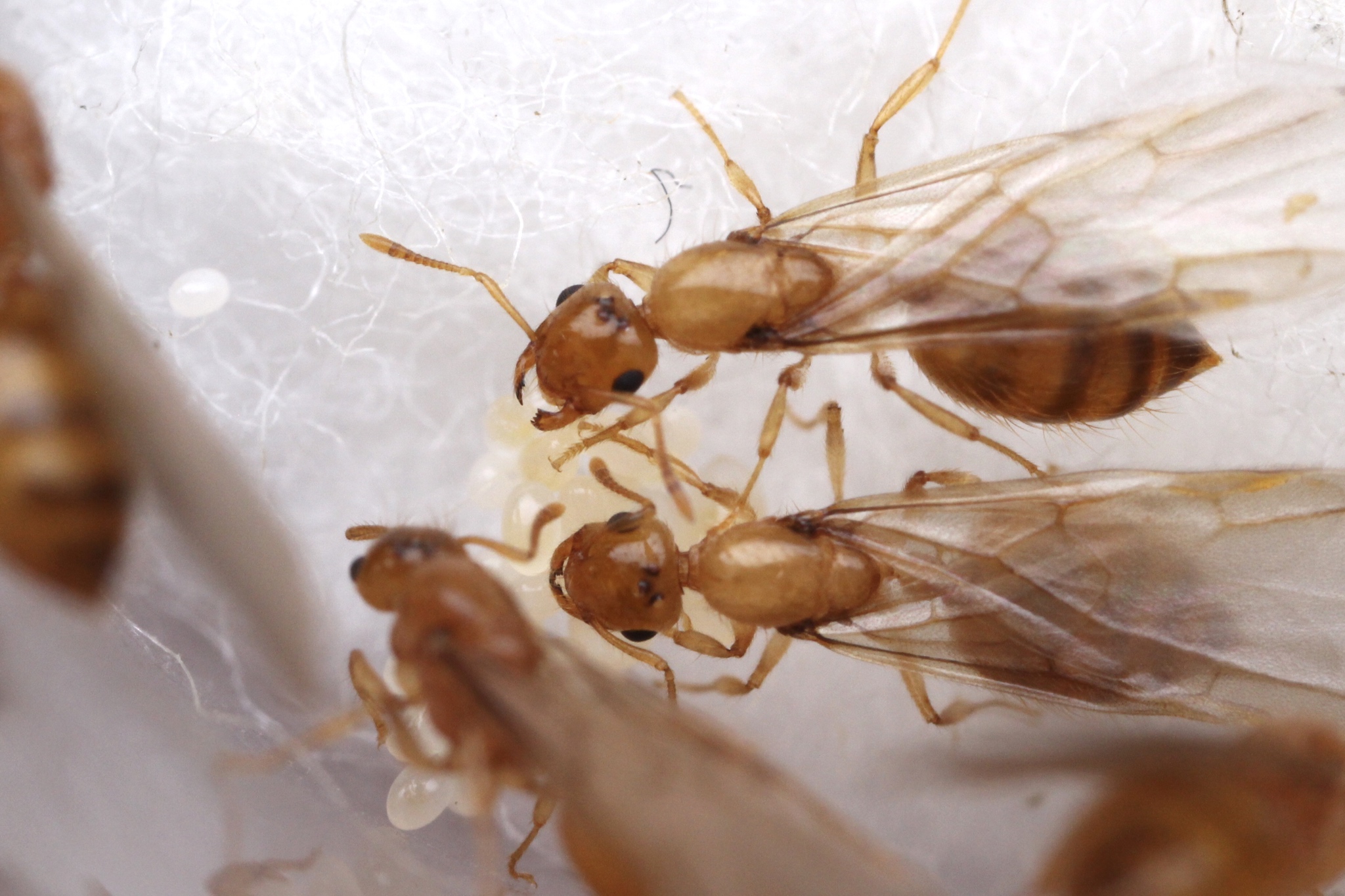 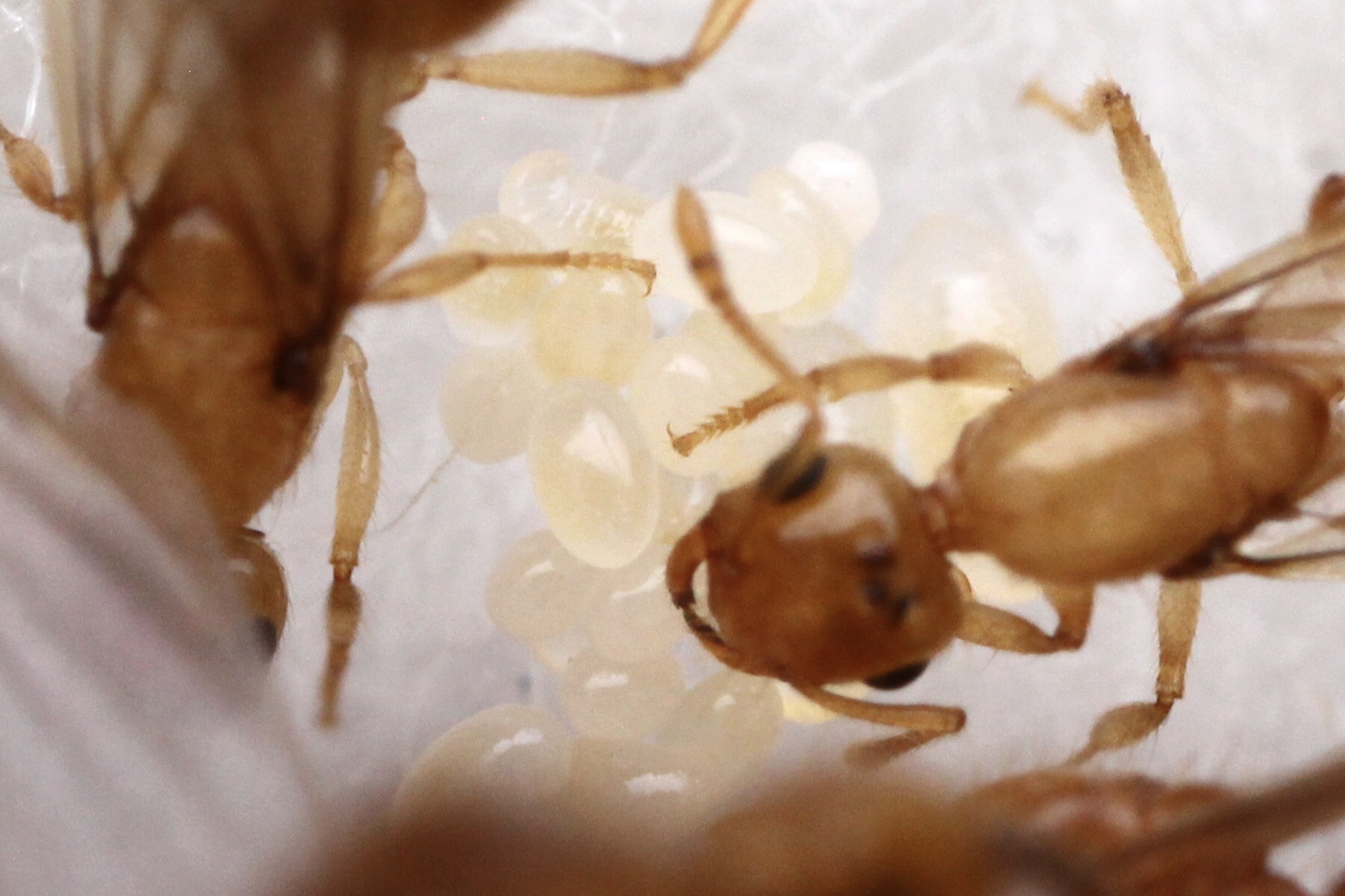 Here is the second group of queens, all 6 of which are wingless now. They have a sizable batch of eggs. 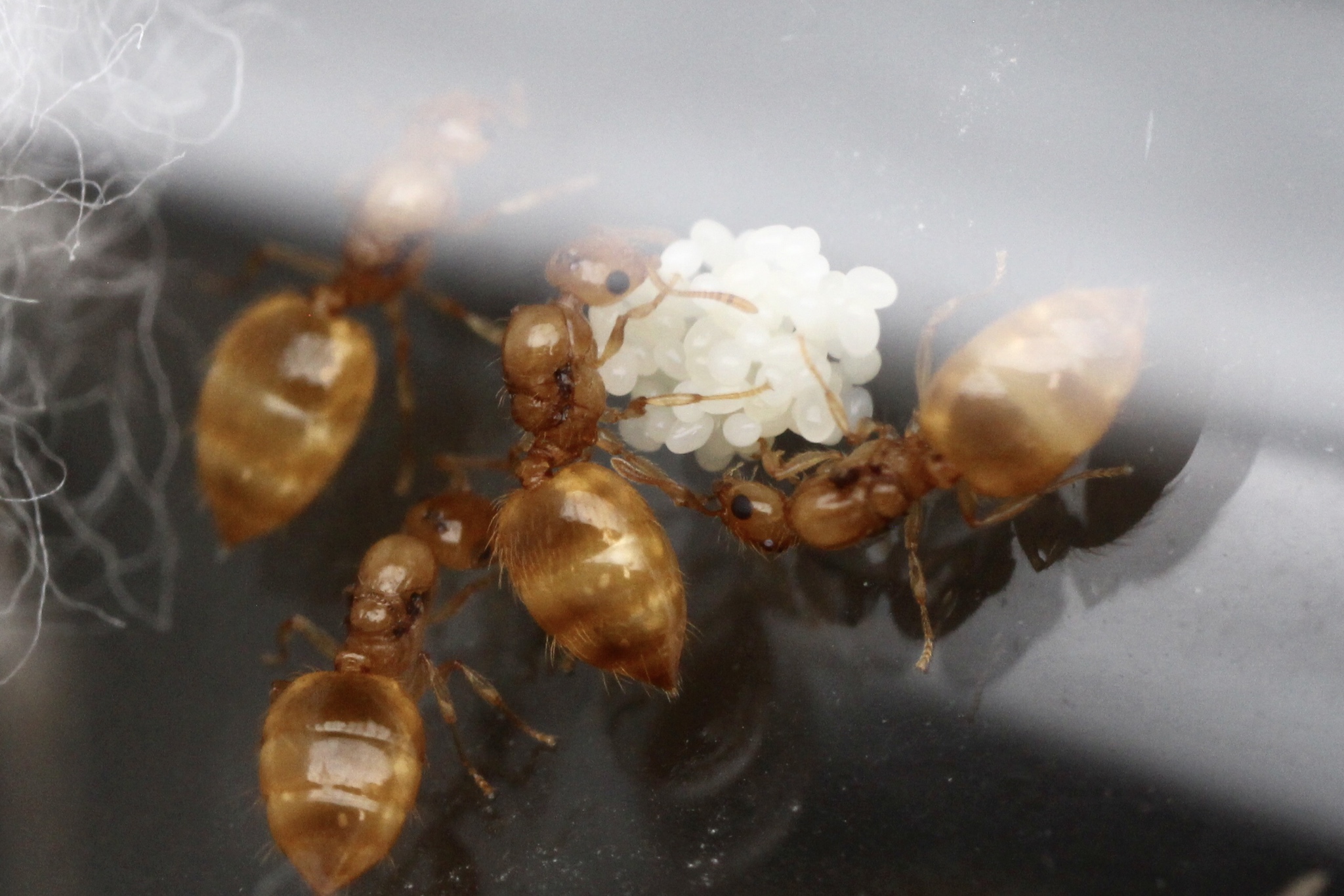 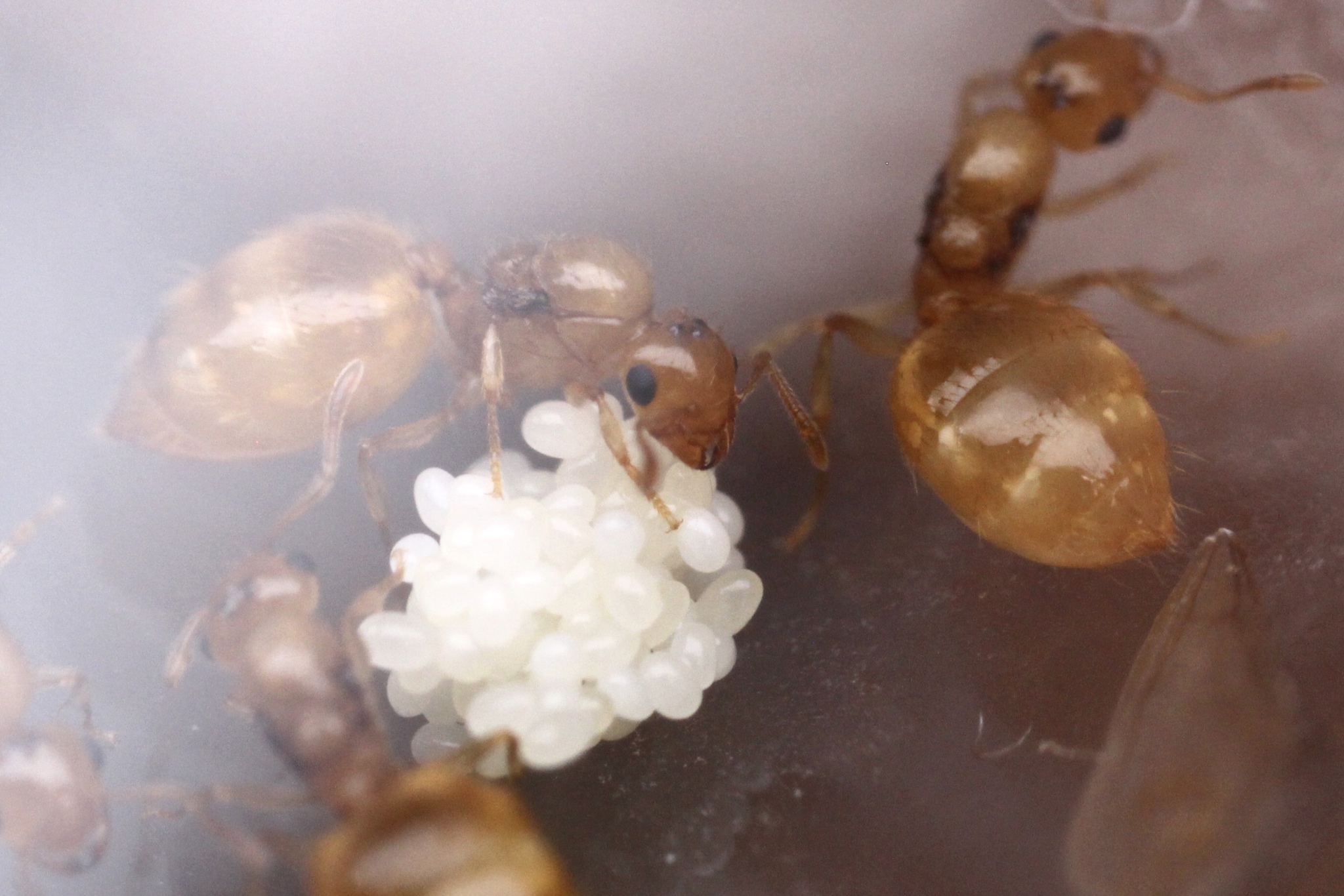 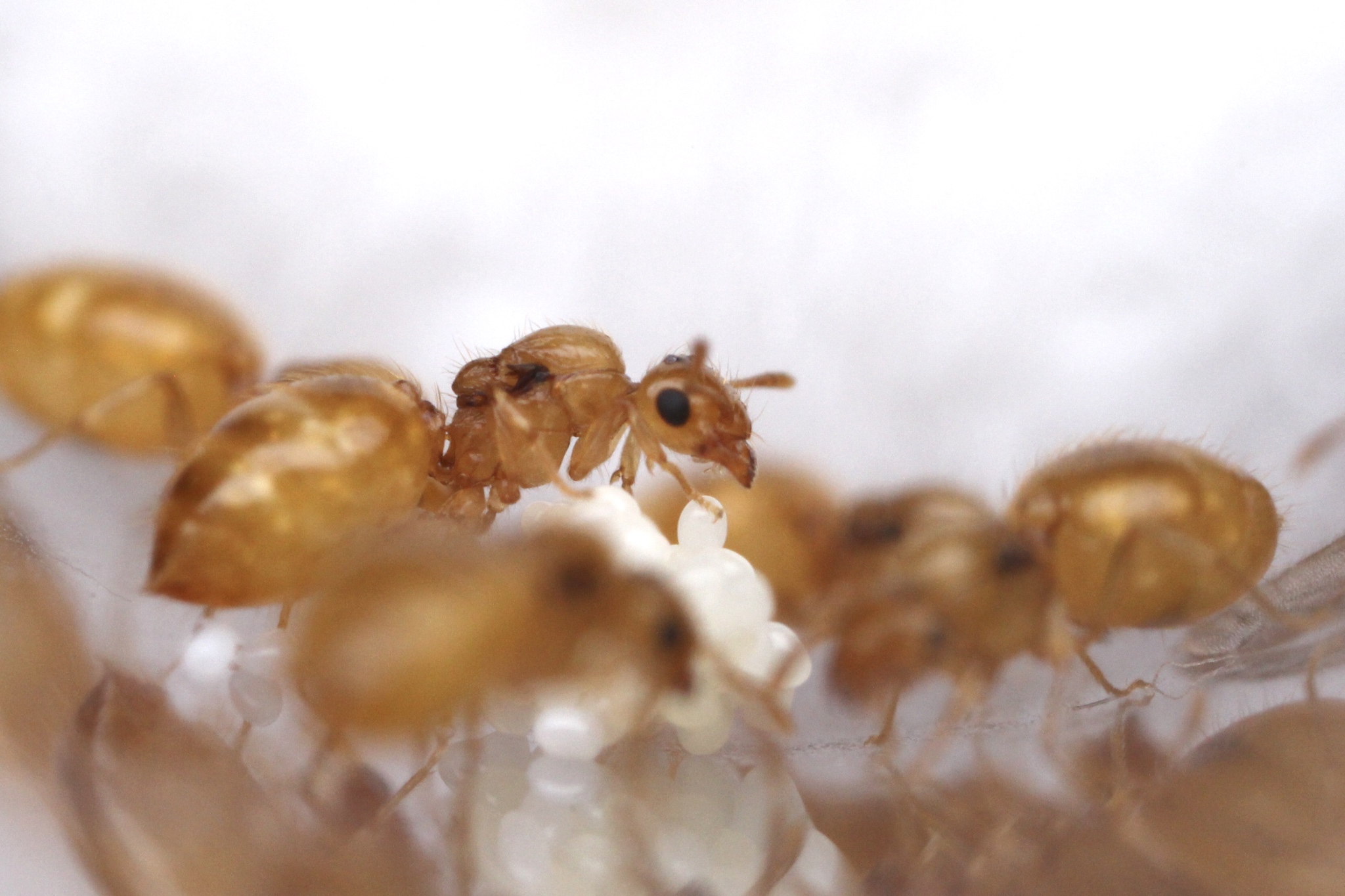 The first queen group has a few pupae now. 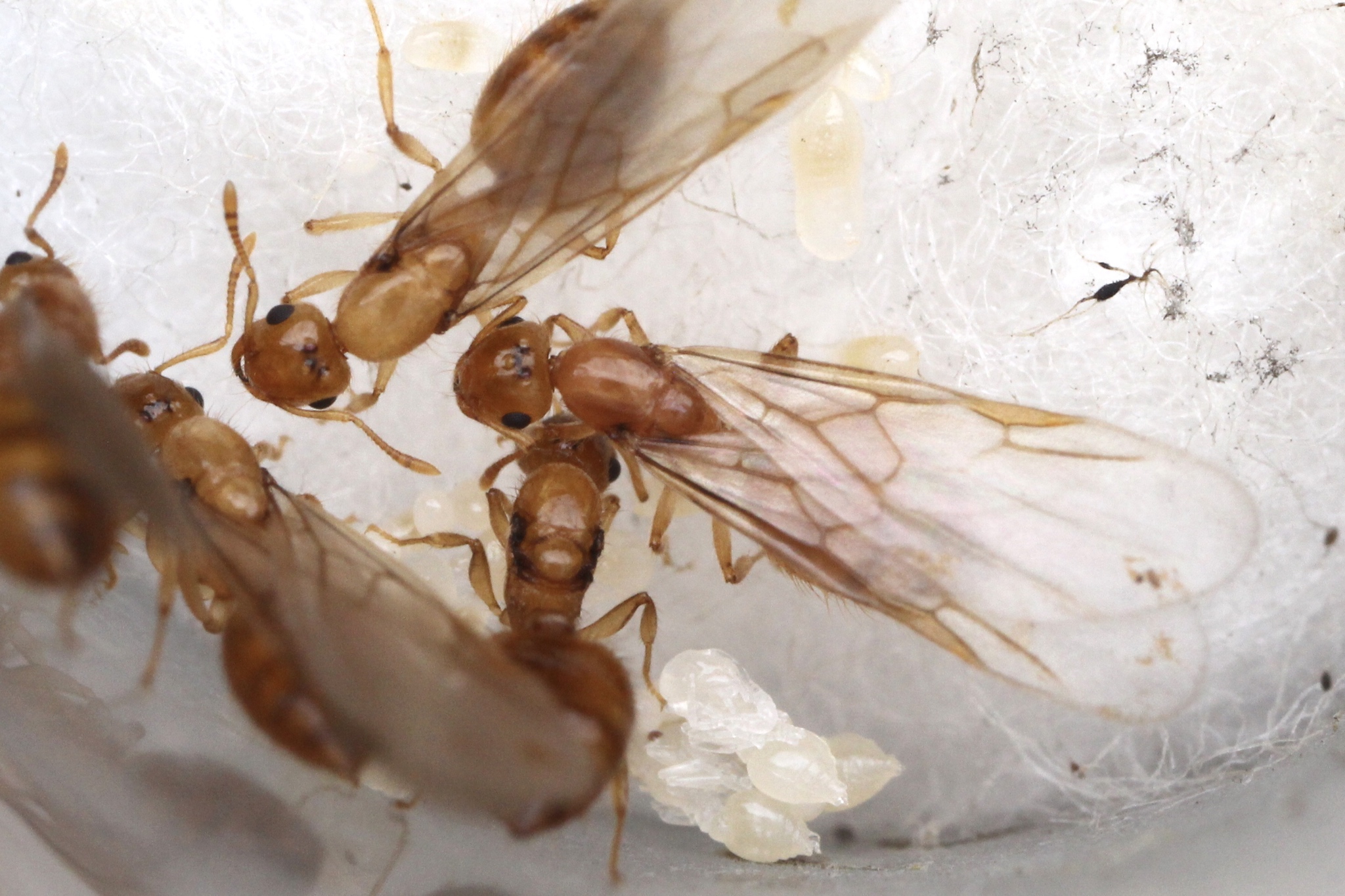 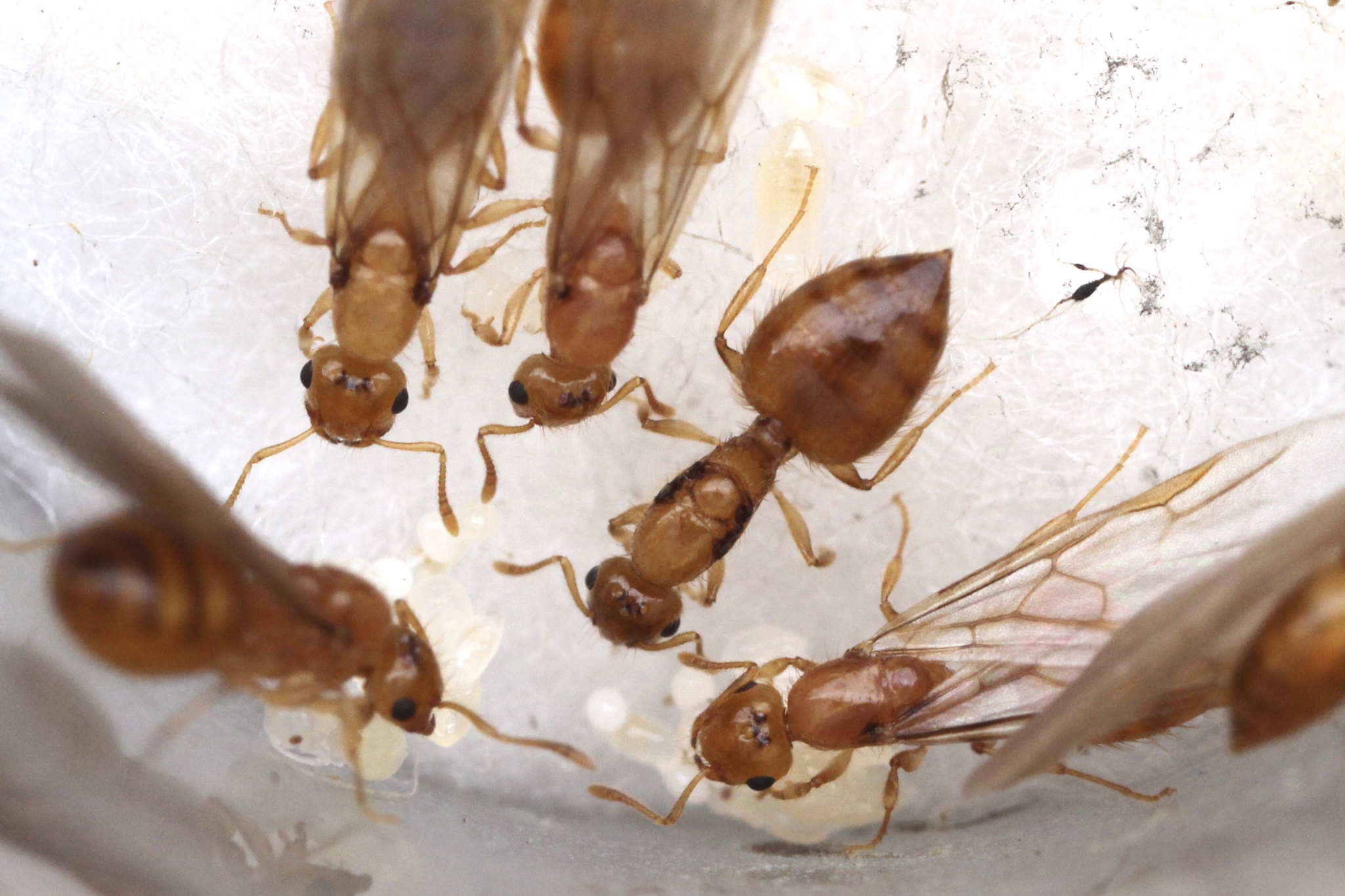 The group of smaller queens only has eggs still.

I don't know why it's taking so long. 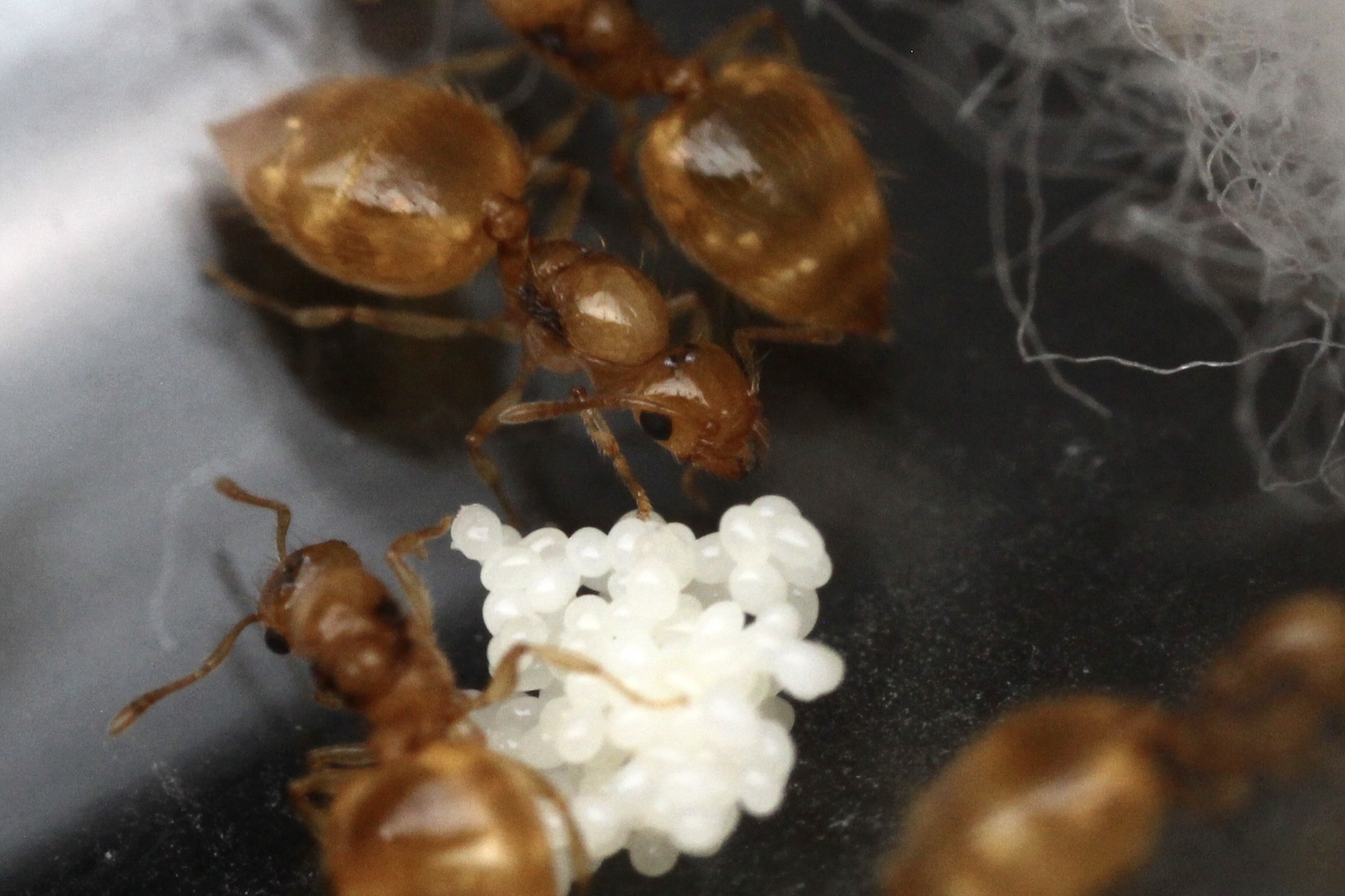 They have the beauty of orange/yellow Lasius, and the cuteness of Crematogaster.

First workers for the group of large queens. 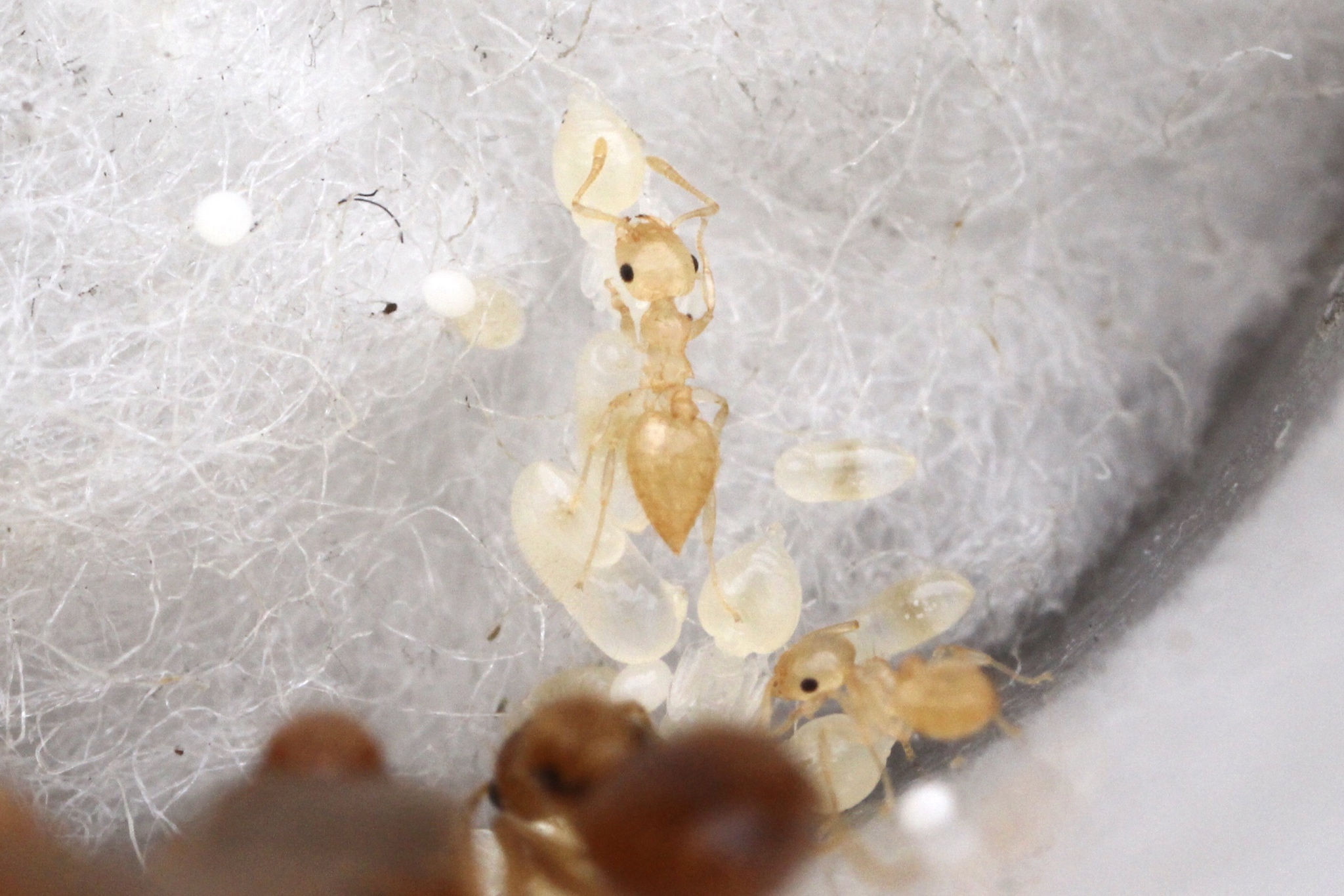 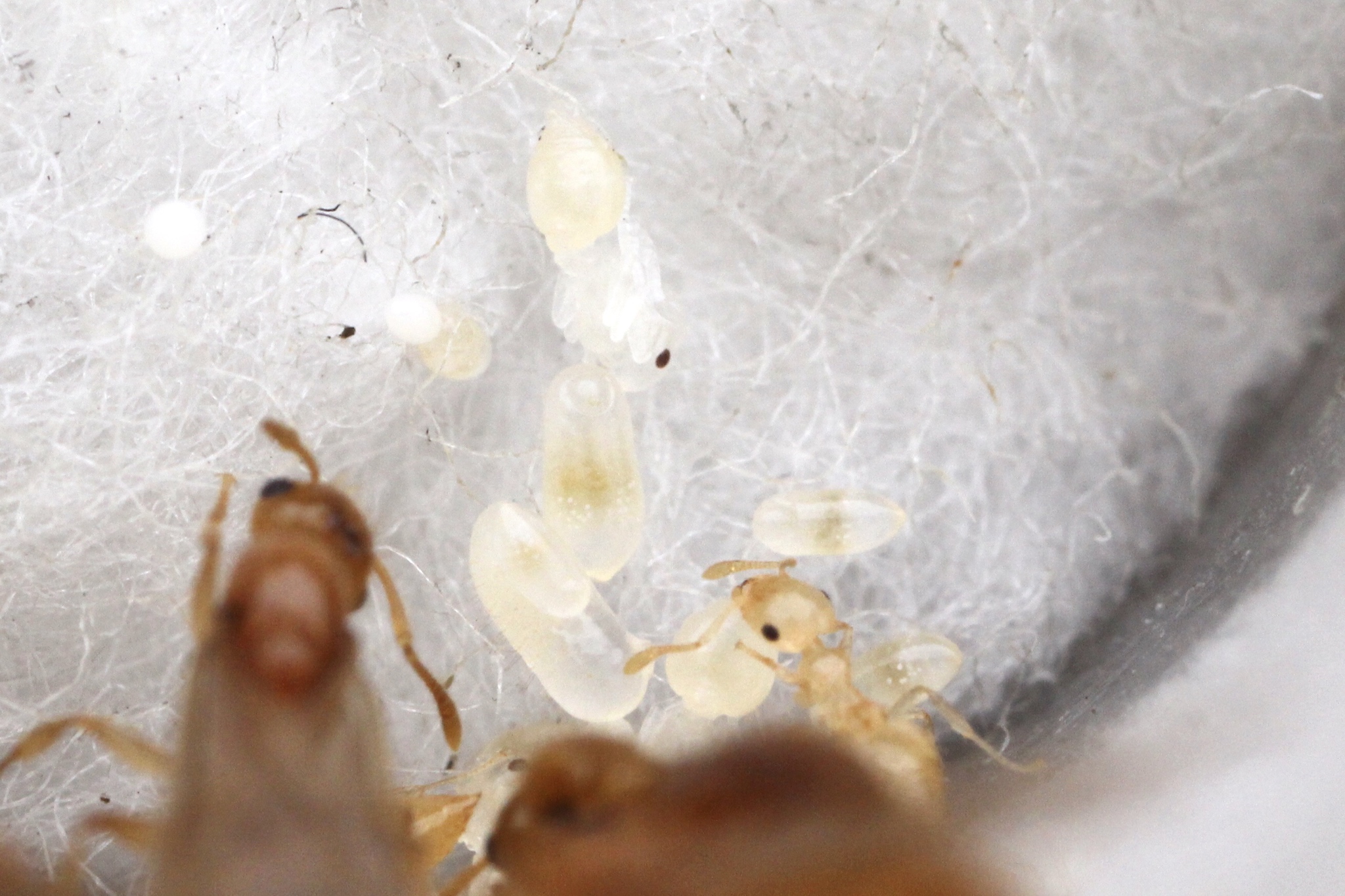 The group of small queens still only has eggs. I'm getting worried there's something wrong with them. 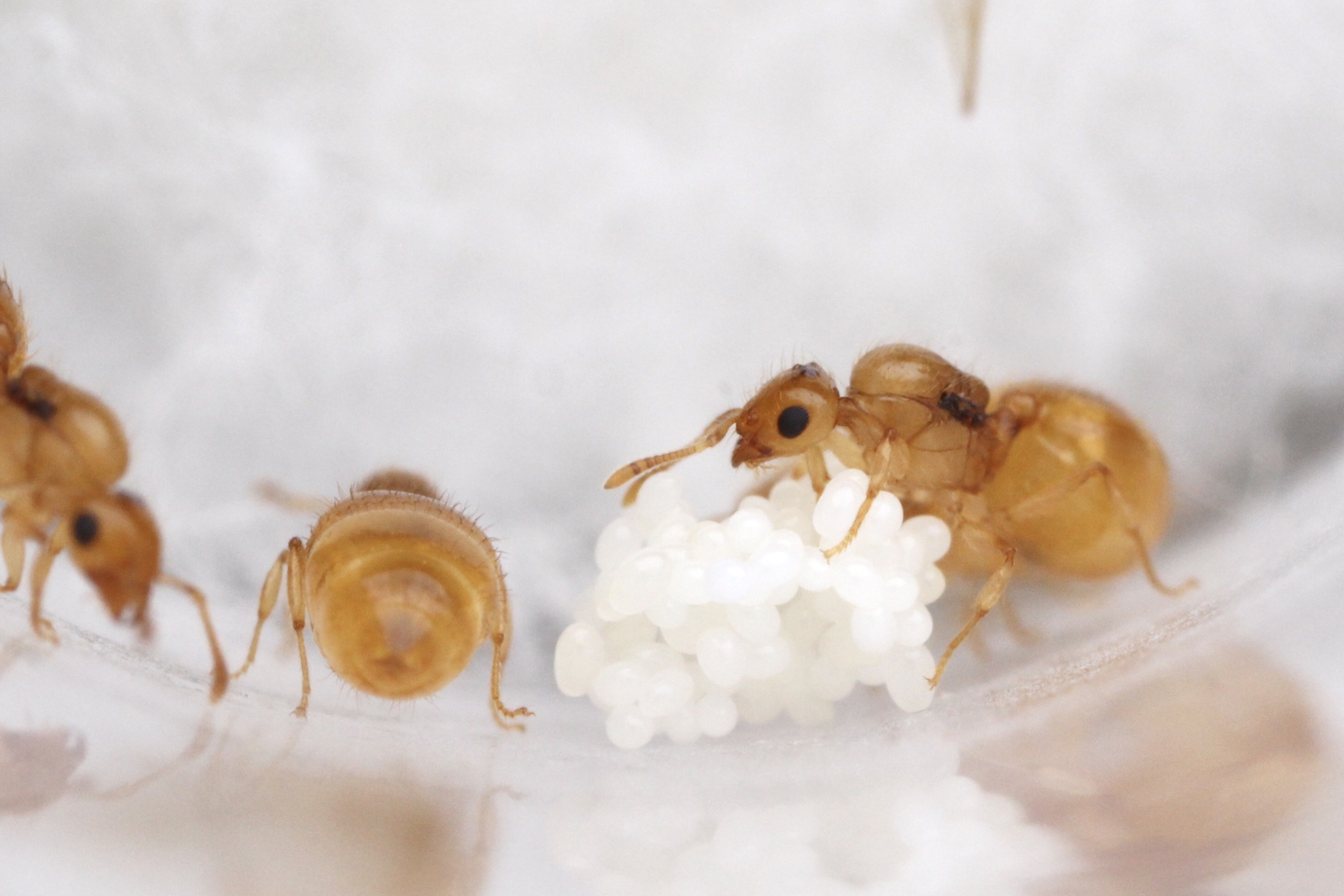 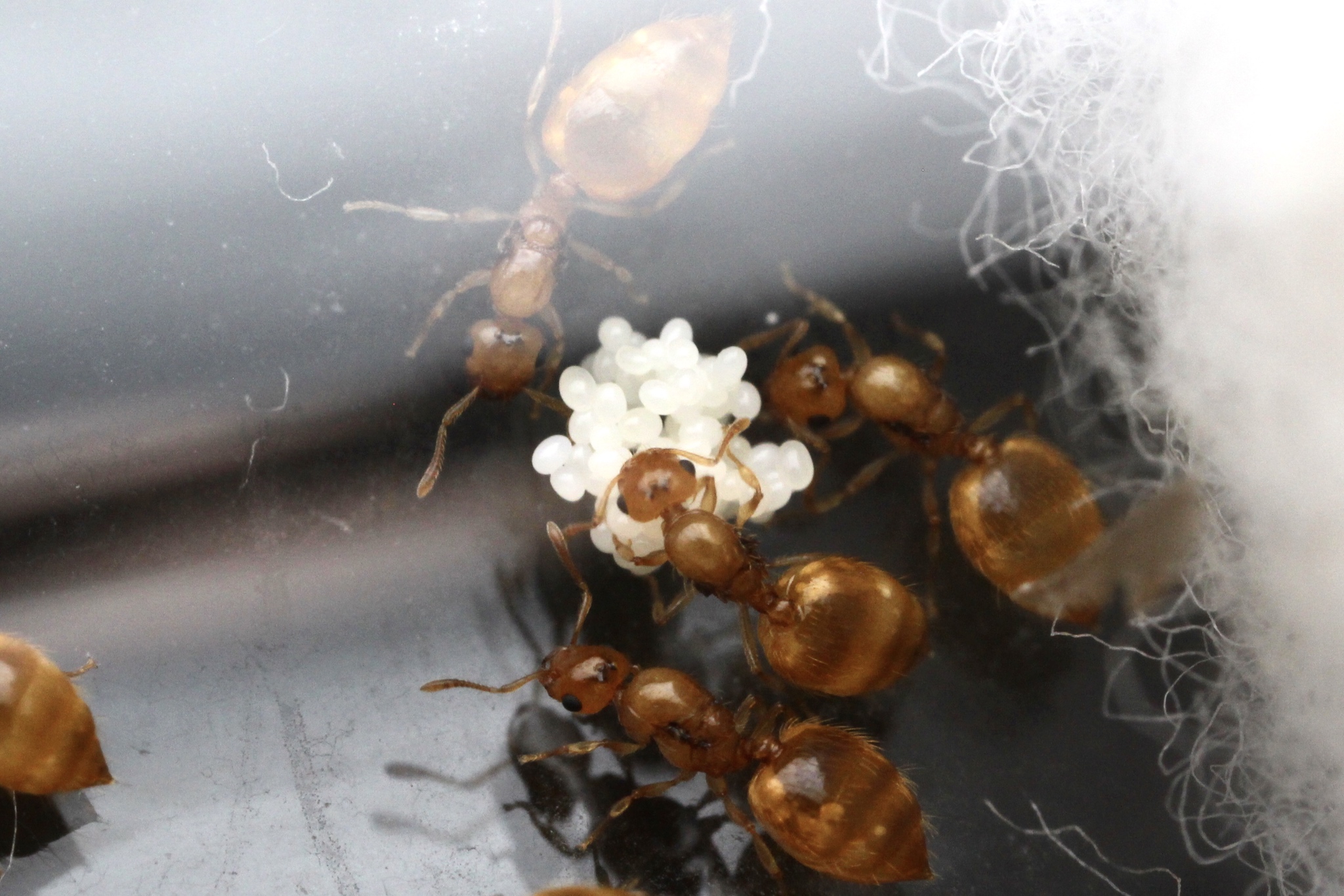 Everything is going very well, even if these colonies are growing at a slower rate than what I expected. They are certainly different from the Crematogaster I am used to. I have at least 3 colonies with workers, but the group of smaller queens from the last few posts was my only group that never had their eggs develop.

I would also like to share that I recently traveled to northern Alabama and I found both queens and workers of Crematogaster missouriensis while I was there, a species that is known to be very similar to C. minutissima. Before finding missouriensis, I wasn't sure if all of my minutissima queens were really minutissima, but I can now confirm that missouriensis queens are unmistakably larger than the queens of minutissima. They're at least twice the size. Here is a collage I made where each picture is adjusted to the accurate size of the queens relative to each other. The smaller one is minutissima, the larger one is missouriensis. As you can see there is also a slight difference in color. 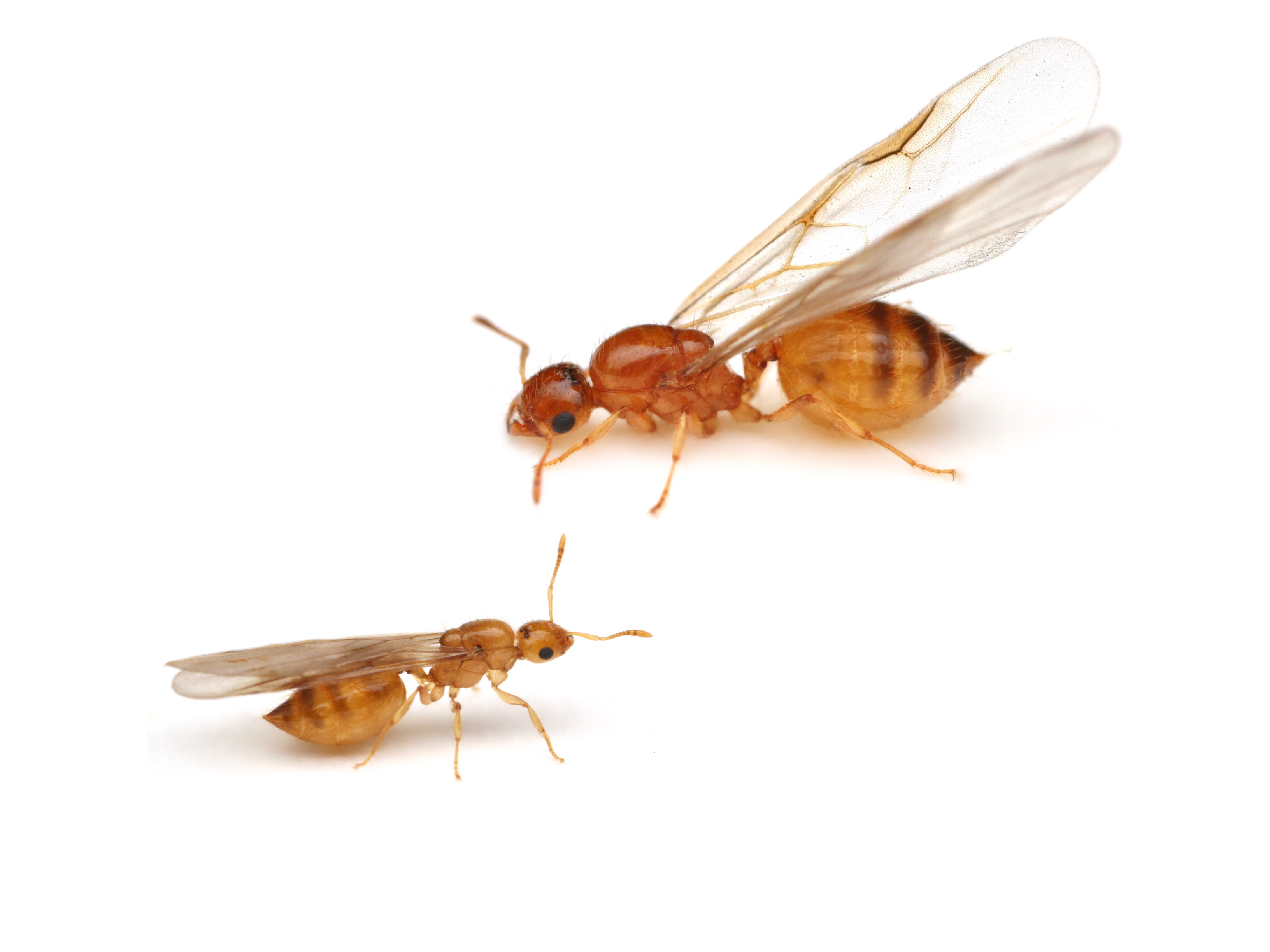 Here are some pictures of my most far-progressed Crematogaster minutissima colony. Lots of eggs have been being laid recently and there are at least 10 workers now. 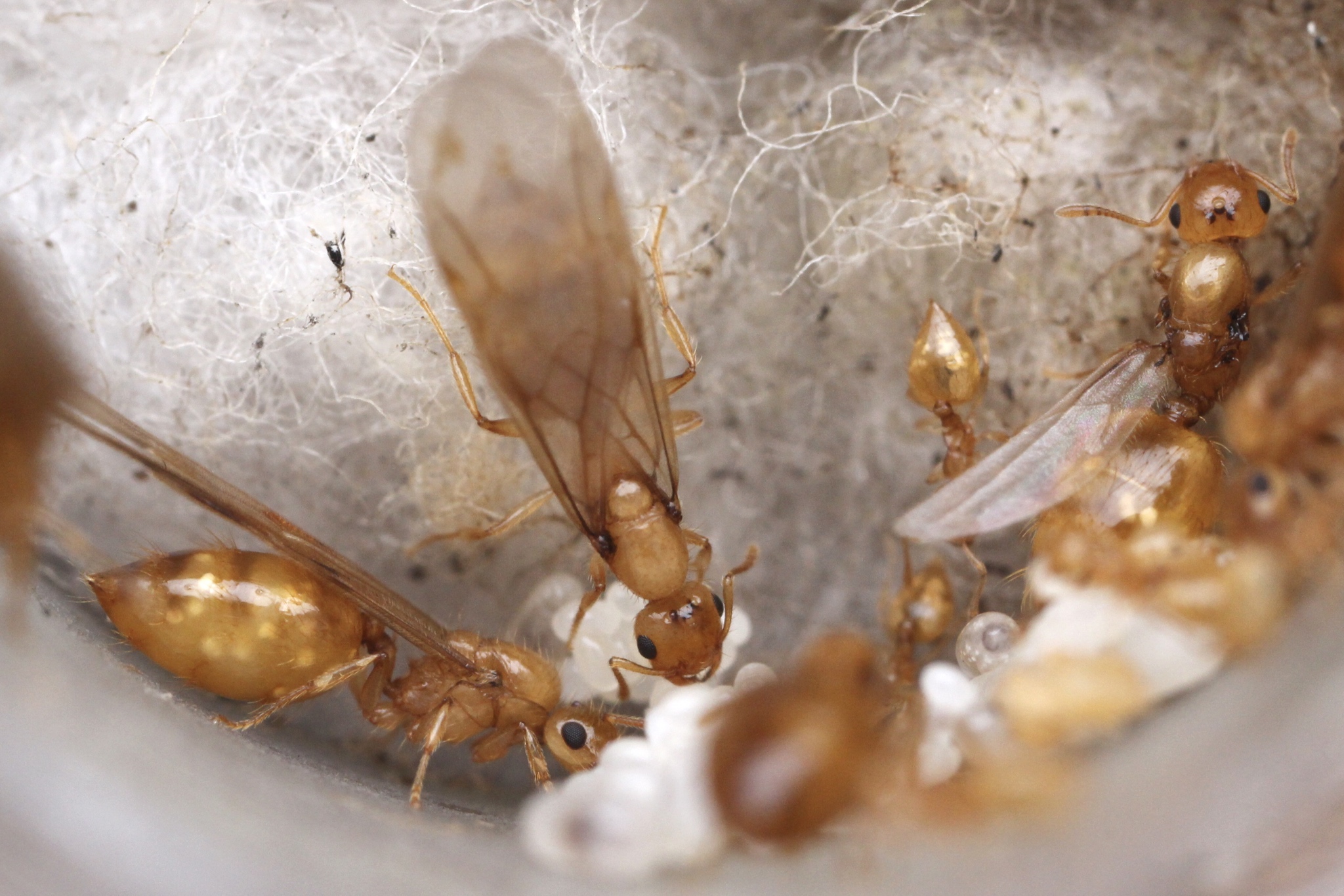 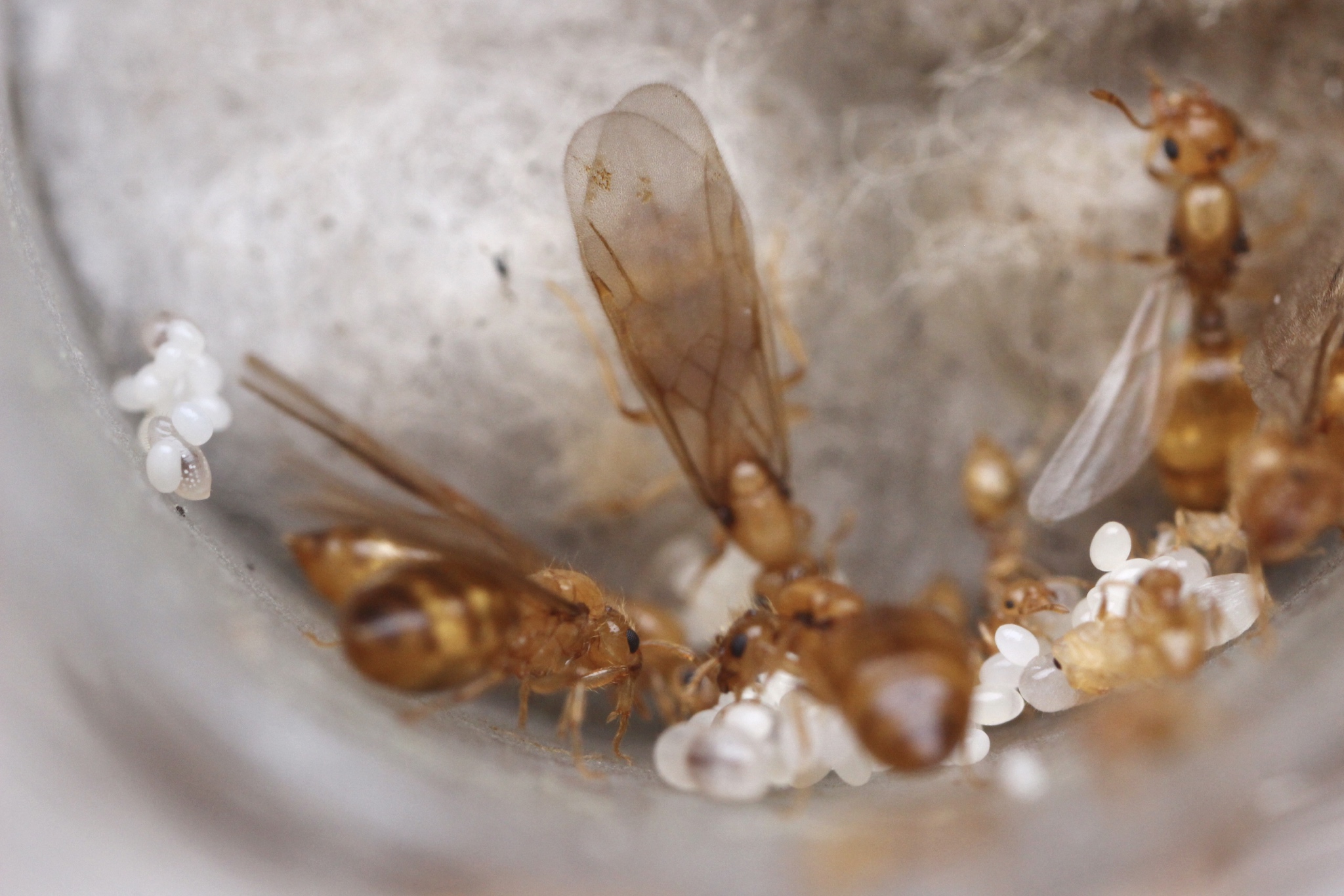 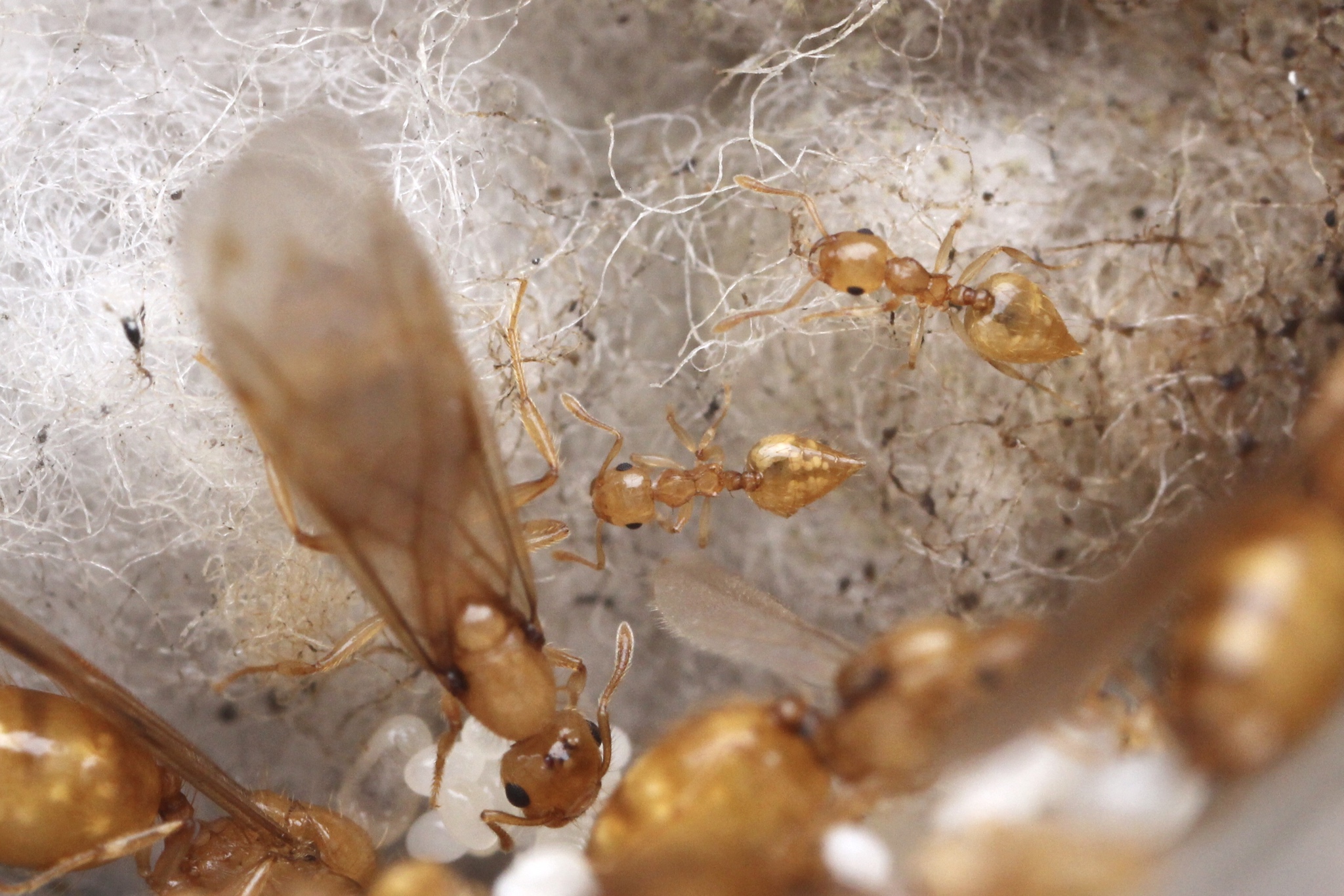 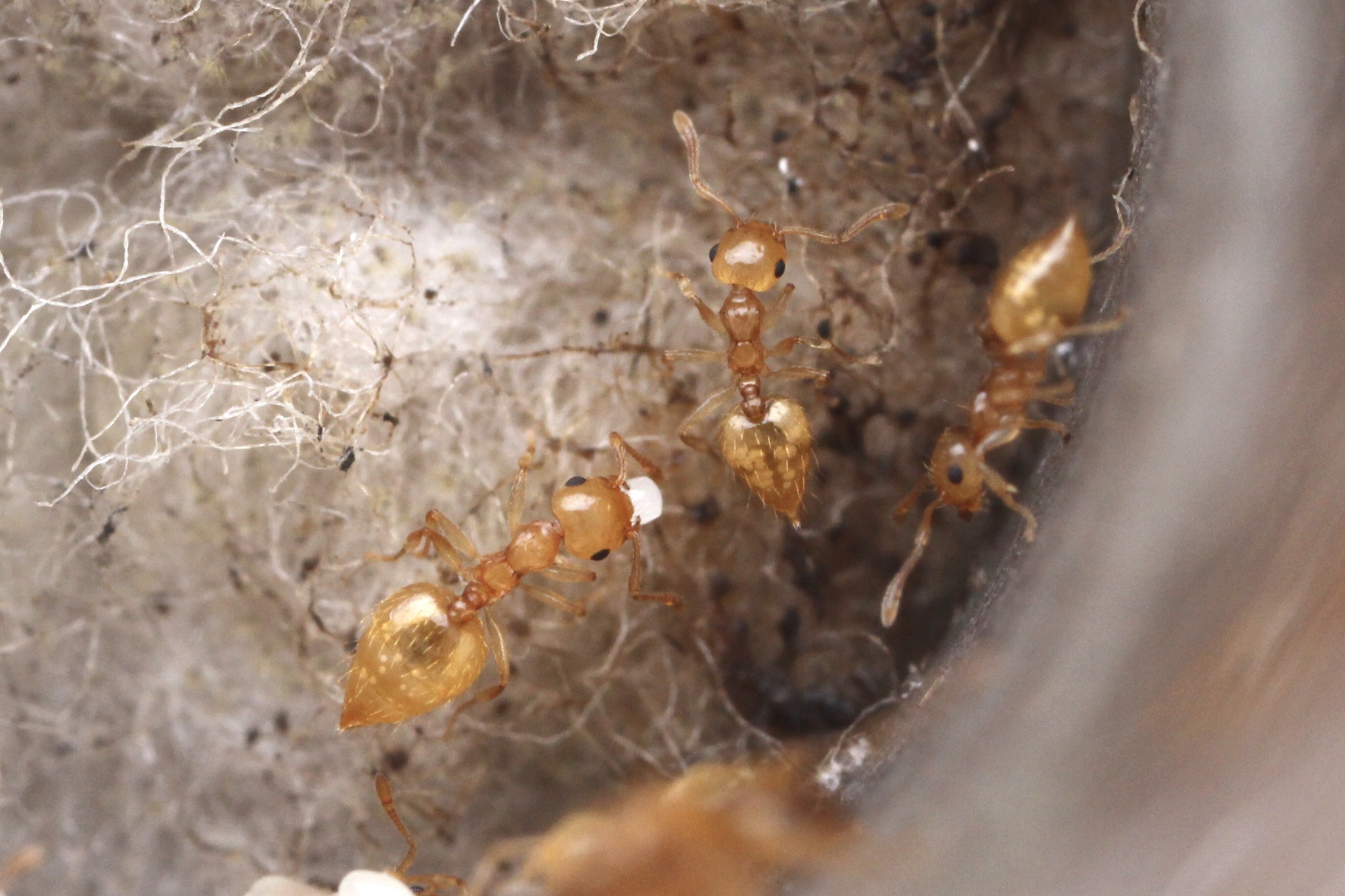 Also tagged with one or more of these keywords: crematogaster, missouriensis, minutissima, journal