Cephalotermes rectangularis belongs to the Termitidae family of termites and the sub-family of termitinae and the genus of Cephalotermes (the genus only known member). They are an forest specilized termite that feeds on highly decayed wood and lives in the jungles of Central Africa and West Africa. They live in higly structured, carton mounds, usually located by a log or tree trunks. The surface of the mound is very hard and 5-10 cm thick, though behind this thick layer the carton is much softer until you reahc the queen cell. Many nests have also large open tunnels in the surface that might have a ventilation function. The nest has a labyrinth construction and it is the primarily defense of these termites. They are also hard to collect since they quickly retreat deep down into the nest if you break it open. 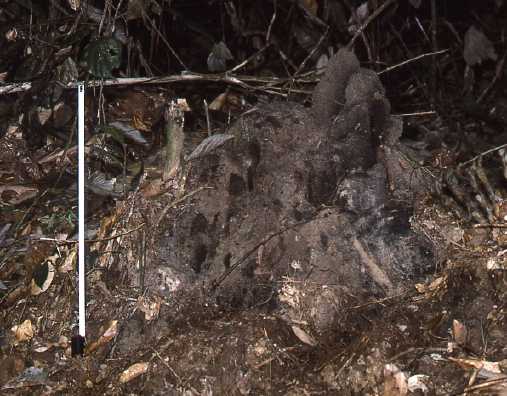 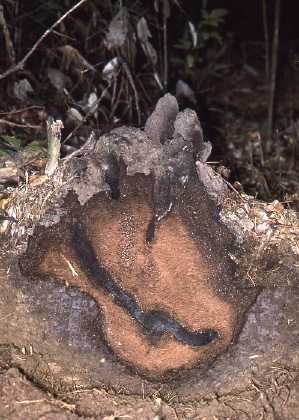 Pictures on the carton mounds picture by D.Firugue, Gabon

The colonies can have several million individuals but only about 0,1% of the colony is soldiers which aren't much bigger than the workers. It is because soldiers aren't much needed when you have a big labyrinth that easily make your enemy end up getting lost and have such thick walls that protects the nest. Almost all defense investments are put on the construction rather than the soldiers. They have probably one of the best defense of their nests in the termite world.

The alates are really small and probably some of the smallest in the termite world they are also very fragile and have very few nutrients reserves. Nupitals happens twice a year in enormous numbers but the chances of founding a new colony is extremly small if they do the colony will most likely last for decades. The queens of cephalotermes rectangularis get very physogastric and has the biggest weight difference between physogastric form and alate form. The queen weights about 25 000 times more than the queen did as an alate in comparison Macrotermes Bellicosus queens weights 500 more times than whatt she did as an alate.

C. Rectangularis queen with workers and a soldier picture by Dr. Jan Sobotnik and TRT, Cameroon 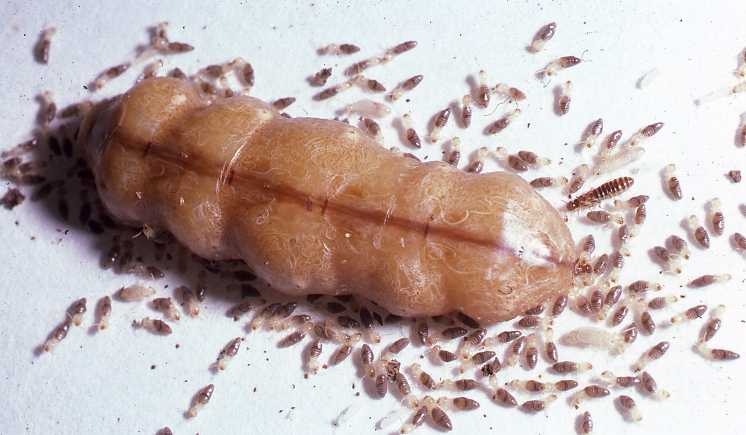 Queen and her workers and king picture by C.Bordereau 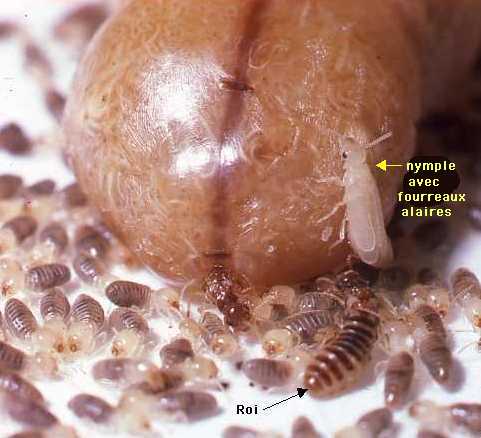 Close-ups on the Queen and king and a nymph picture by C.Bordereau

I think I covered the most interesting parts, people that I know usually gets very suprised by this termite since the queen is so large comapre to her body. I hope you like this, I didn't go to deep because there is not much about them I can find.

They are probably one of my favorite species termites atleast in termitinae as they got labyrinths and have those highly physogastric queens.

Wow.... How large is the queen (in millimeters)? She looks like a living sausage....

I can't find any source that state the length of the queen. I guess I could ask Dr. Jan Sobotnik a termite expert, I think though she is probably much smaller than what she seems I would guess something between 30 mm to 60 mm but idk it is hard when you don't even know how long a worker or soldier or even an alate is

The queen alate weights 0,81 in mg and as physogastric they weight 20250 mg that is all what I know, if all the facts are right. So I know atleast the weight of her I guess

Nice! Finding an accurate total lenght mesurements in termites is way more difficult than one could expect, even in the case you would find sveral measurements in various taxonomic keys about a given species they are (at lest in my experience) extremely specific stuff, like the width of the postmentum or the lenght of the tibia, which are great for someone with a microscope and the task to ID the specimems, but from which i personally can't figure out a sufficently veritable TL (total lenght). Jtermiteo, in the case you'll ask Jan let me know his answer, i'm curious too.

Sure, I will if I ask him. Yeah accurate length measurements among termites can be hard to find it took a few weeks before I started to find how long workers and soldiers of Hodotermes was

That's a really fat termite queen.... wonder if the termites in Virginia get that big.

I found a pair of Reticulitermes.

Also tagged with one or more of these keywords: termites, giant physogastric queens