181 replies to this topic

I've had the idea of starting up a journal for some time now to chronicle the interactions between ants and native plants in my habitat garden. It is still pretty cool for much ant activity, but many plants will start blooming very soon, and insect activity will kick into high gear. I hope to show how native plants can benefit native ants and vice versa. This connection is very well known when it comes to butterflies, but I think more people in the ant-world need to realize the vital role native plants play in all eco-systems.

There are plenty of other cool insect visitors in my garden, so I'll share updates on them as well.

Here is a nice corner of my yard in full bloom last fall with Aster novae-angliae, Aster ericoides, Solidago rugosa, and Yucca filomentosa. Some Rudbeckia laciniata is in the very back. 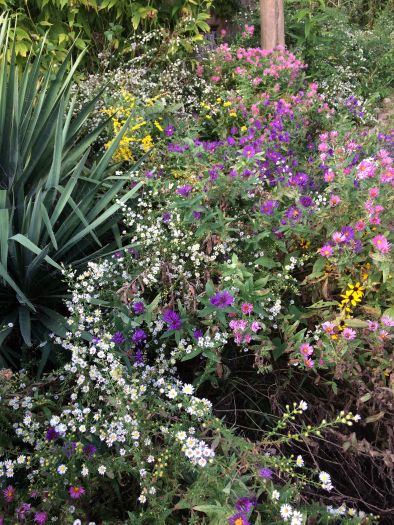 Plant and insect activity is really ramping up in my native plant garden. Prenelopis imparis flew two weeks ago. I could tell because I found about 12 males drowned in my birdbath one morning. The next day, I found a queen while doing yard work. She hadn't shed her wings or laid any eggs after a week, so I decided to release her. I've observed this species tending aphids on the flower stems of my golden ragwort (Packera aurea). This plant usually grows as a creeping ground cover, but in early spring it sends up 12" tall flower spikes, which never fail to attract lots of aphids.

Last Thursday we finally hit 80 degrees, and there was a big Camponotus flight in my yard. I found two winged queens that afternoon while my kids were playing in their sandbox, and two dealates around 9:30 crawling on my patio. After some research, I identified them as C. chromaiodes. The following day, I found a male drinking nectar from my wild geranium (Geranium maculatum). This is a beautiful spring bloomer that happens to be the first native plant I added to my garden eight years ago. They're basically indestructible, and they have a really cool spring action seed dispersal method.

Here's a photo of a nice corner I have planted with wild columbine, wild geranium, and golden ragwort in the rear. Pollinators love all of these plants and the columbine is a hummingbird favorite.

I actually encourage flowering lawn "weeds" to help pollinators as well. My lawn is full of dandelions this time of year, which I use to brew up a heavenly dandelion wine. Part of that process entails plucking of lots and lots of petals, and while doing this I always find lots of tiny ants on the flowers drinking nectar. This year I found Monomorium minimum, Solenopsis molesta, and Tapinoma sessile on the flowers.

My yard is quickly approaching native jungle stage. Once the summer solstice hits, it will be in peak bloom and full of insects. One of my favorite plants blooming at the moment is Penstemon digitalis. Bumble bees love it, and it is one of the easiest native plants to grow from seed. Here is a photo of a bloom and its visitor:

Another interaction I have enjoyed observing is aphid tending on my Virginia Creeper vines, Parthenocissus quinquefolia. This vine gets a bad rap because people mistake it for poison ivy, but it is one of the highest wildlife value plants around. Bees love the inconspicuous flowers, and birds relish the fall berries. The bright red fall color is spectacular as well. It is easy to grow from seeds gathered in the fall and sown in pots that are left outside in the winter for cold stratification. It can also be propagated through hardwood cuttings, but I find seeds easier. Honestly though, it will probably just show up in your yard in bird droppings if you let it. A piece of this vine has grown up over my wall and attracted many aphids. I big group of Crematogaster have been tending them, which you can see in this photo:

A non-native weed I have in my yard is vetch. It kind of bothers me, but at least the vines disappear once their seeds drop. I just noticed that the vines are always covered in ants visiting these little nectaries. Bumble bee queens enjoy the nectar, and I see lots of ladybugs on the plants too, so I guess it isn't all bad. Here's a photo of an ant drinking from a nectary. Plants with these nectaries are fascinating to me.

vetch is edible and commonly known as the wild pea because the seed taste like peas. the newer tops of the plants taste like bean sprouts.

Very nice!! I love native plants! I won't let any garden projects happen at the camp I manage unless they plant Native! I wish I had the diversity of yours though!

We did just have a group of Girl Scouts plant a Bee Garden which turned out quite nice.

I don't understand. are you being sarcastic or genuinely interested/surprised?

I don't understand. are you being sarcastic or genuinely interested/surprised?

I'm having fun with a new $10 clip on macro lens for my iPhone. Here are some shots from my native plant jungle.

This is what I think is a Hylaeus bee on gray dogwood. This bush was a volunteer in my mother's garden that I transplanted five years ago. This plant has incredible wildlife value, and it is finally blooming this year.
Bombus impatiens pollen gathering on Tradescantia ohiensis. This has to be one of the showiest native forbs, but each bloom only lasts a day. It is an important pollen source of new bumblebee colonies.

People sometimes ask on here how to attract aphids. Considering that aphids are pretty host specific plant parasites, native plants are really the best way to attract these insects and in turn help feed native ants through honeydew excretions. In this update, I want to highlight a couple of attractive and very easy to grow natives that aphids are attracted to.
The first is Bidens polylepsis or beggar's ticks. This is a tall fall blooming native annual. It's bright yellow flowers are among the last things blooming in my yard, and they are very attractive to bees of all kinds. The flat seeds are stick-tights that cling to clothes and fur for dispersal. Big stands of this plant are easy to create simply by broadcasting seed in the fall or early spring. Though it is far from blooming in my yard, these plants are already helping to host aphids and Crematogaster in my garden. I'll try to remember to update this with photos of their lovely blooms in September/October.


I have these growing in a barrel on my patio along with another great aphid plant, Rudbeckia hirta. This is the common black-eyed Susan, which abounds along roadsides throughout the country. This plant grows as an annual or biennial depending on conditions and is very easy to propagate by spreading seed in desired locations. It is the state flower of Maryland, and much loved by seed eating goldfinches. Here is a photo of another species of aphids on Rudbeckia along with a lacewing larvae, which are fierce predators of aphids.


Anybody could fill up a garden with these two plants spending five dollars on seeds or better yet gathering local seeds for FREE.

And here's a cool looking ant-mimic jumping spider I saw yesterday hunting on my Heliopsis helianthoides plants. More to come!

How much does it take to maintain all that?

Seeing as it's all native, I would assume not too much.

How much does it take to maintain all that?

Seeing as it's all native, I would assume not too much.

Not too much, really. Most of these plants are naturalized, so I just let them do their thing. It’s “wilder” looking than most people would go for, but that’s the look I’m after. I do water every few days when it’s dry, but last year it was wet enough that I didn’t need to. One of the big tasks is cutting down all the old stems of the perennials to keep things looking neat.

And here's a cool looking ant-mimic jumping spider I saw yesterday hunting on my Heliopsis helianthoides plants. More to come!

I know, right?? I see them frequently in my yard.

I'm gonna keep my eyes open then! I love Jumping Spiders and I see really cool ones all the time but I'd remember if I saw that one.

Even the way they move is so convincing that these mimics are easy to miss. Looks like a Camponotus minor until you examine closer.

I had dinner at my parent's house last night and was able to admire this corner alongside their driveway:

These are all plants I raised for her from seed a few years ago. The butterfly milkweed (Asclepias tuberosa) and narrow leaved mountain mint (Pycnanthemum tenuifolium) are native, but the rose campion (Lychnis coronaria) in the middle is not. This cost no more than $2.50 and some patience. Small ants love nectaring on milkweed, and there is NO plant more popular with pollinators than mountain mint. It is like crack for bees!
I got my love for plants from my mother, but I've opened her eyes to the value of native plants. We've filled up her garden with natives now!
Here is a great quote I read last week:
"More than any other species on the planet, we have the ability to shape our environment. I firmly believe that if we all decide to make an effort to restore some of the local plants to our landscapes, we will in no small way help make our own piece of the world a richer, more diverse, and, by consequence, a healthier place. This is not politics, it is simple truth."
-William Cullina Wildflowers: A Guide to Growing and Propagating Native Flowers of North America

Unfortunately until you are able to go to Home Depot and buy Native Plants for the same price as the crap they sell this will never happen.

Also tagged with one or more of these keywords: native plants