Hello guys, I caught a species of Crematogaster queens last summer 2018 while I was working at my old job. The story of how this colony got to where it is now is pretty intense and grizzly so sit tight and enjoy the story. If you don't care about it, I also have pics for you.

If you're the sensitive type, I wouldn't recommend reading the story.

Summer 2018, another blistering hot day on the job, but today was more bearable since it rained the day before.
Dozens of flying ants were landing on my sweaty uniform as I brushed them off thinking they were fire ant queens. It's rare for me to find anything other than S. invicta since they've overtaken the majority of the area. They were getting in my face, in my ears, in my mouth and I was starting to get annoyed because Texas heat don't play... I decided to take a break in the back of my work van when I noticed the queens on a nearby bush. They were taking apart the outer layer of the twigs to get inside and I know that fire ant queens don't do that. I also noticed that they're movement weren't as frantic as our foreign invaders. Upon closer inspection I realized that they were a Crematogasters.

I emptied out my drink cup and tossed in 5 which were later was rehoused into the closest thing I can resemble to a last minute test tube. They settled in for the night and were already grooming each other. Within 2 days there were already a small clutch of eggs. Everyday after that the mass of eggs increased day by day. After a few weeks in, there seemed to be a decline in the egg pile. There were a few larvae now so I'm assuming maybe there were some cannibals among them. Through-out the years, when I had a macro lens, I would zoom in to see what the larvae were up to and it was a common occurrence to see a larvae feasting on their siblings. I know that sometimes queens would eat excess brood also during the founding stage. I tried giving them honey, but they wouldn't take it. The queens also seemed to have established their social hierarchy. The dominant queen stands tall and more proactive with nursing the brood while the submissive queens stay lowered and aren't as active with the nursery.

Here's is when the things become violent. At this point when I checked on them, 2 of the submissive queens were dead and when I came home from work, their bodies were ripped to shreds. I'm not sure if it was a natural death, but the 2 queens that died were the most submissive ones so it's not far-fetched to rule out intentional murder.

A few months pass and all of the callows seemed to have hatched around the same time resulting in a huge boom of workers for the founding stage... They finally started to accept food such as honey, almonds and insects. They don't seem to eat much compared to Solenopsis. They were getting pretty big in numbers and I noticed queens violently attacking each other so I decided to buy a bigger setup. I connected the test tube to the slightly larger setup and the workers began to explore. One queen was dealt the most damage and lost a few limbs, I'm assuming she was the least dominant due to the workers attacking her as well. The next day the damaged queen left the tube nest and stayed in one corner of the enclosure along with a few workers that claimed their alliance with her. I'm not sure why these workers decide to leave with the weakest queen, but they did. She continued to stay in the corner with her followers, not laying a single egg. I'm not sure why she didn't choose to live in the damp claustral area. The damaged queen and her followers would explore it, but never went inside.

The other 2 queens refused to leave tube and continue to fight, but it was less violent as time passed, mainly just spreading their jaws at each other, perhaps they've reached a stalemate? About a month passes by and more workers hatch. They begin to take food, but these ants are pretty picky... They will not actively swarm a food item that was offered to them the day before and will flat out ignore it if they continued to receive the same food, even if there was plenty. If I didn't offer them anything different, they would retaliate by consuming their own brood... Talk about throwing a tantrum, this was pretty extreme. I let tubes dry out as I continued to keep the claustral area moist so that they would move in.

I arrived home from work to discover a very alarming scene. The workers were fighting amongst one another and so were the 2 dominant queens. I wasn't sure what to do. I tried to separate them, but it seemed that the workers have already chosen their alliance and would attack the queens and other workers. The curious scientist in me wanted to decided to study this behavior so I just put them all back in the setup and let nature take it's course (I know, I know, but give me a break alright? There are lab rats being nuked for the sake of cologne as I type. I tried separating them already, leave me alone). I never expected for Crematogasters to be so violent, hierarchal and picky with food. Even my old Solenopsis colonies were never like this. The least dominant queen would run and hide avoiding conflict as much as possible, but would fight if a worker would clamp on to her. I don't think she is going to make it. I haven't seen her lay a single egg after a month of being in the out world.

Finally the civil war was over, there was a mass of dead workers, but still plenty of live ones to go around. The 2 queens died side by side in the tube, deadlocked for their position on the throne. Ultimately it was the queen with her run and live another day tactics that survived. All the surviving workers swore their allegiance to the cast away queen. They began to clean up after the massacre by piling up the dead bodies on a drop of honey and tending to their new queen. I helped clean what I can. I was surprised to how quickly this colony grew in such a short amount and was a little upset that it fell the way it did. A few weeks after the storm and the colony had a small batch of brood. They finally moved in the claustral cell after it had completely dried. Turns out this species prefers it a little more on the dry side, maybe that's why they refused to leave their test tube.

It is now November 2018. There hasn't been too many new workers, small clutches of brood at a time and still picky as ever. Activity has slowed and they seem to be getting ready for hibernation as the temperature was starting to drop. They stayed within the claustral cell for about 99% of the time at this point. I made sure they had some protein, water and honey and let this new colony settle in for the winter, they've been through a lot and deserve some rest.

The colony has awoken several weeks ago, but seem to be in full swing this month. Unfortunately, the colony has lost over 90% of their workers during hibernation. These were all that was left, a massive pile of dead bodies were put on top of their claustral cell. I have no idea why they chose that area to be their cemetery, but I cleaned it up for them. There's not much activity in the nest, only 2 workers would be out at a time to forage. They DO have a few larvae though, I'm not sure why they do this, but for some reason as of now, they'll feed their larvae until it looks like they're going to explode then they'll consume them. I don't understand the point in this or why they do this. The colony is small now and there hasn't been much activity, but she finally laid a clutch of eggs a few days ago. I hope for the best with this queen and the colony.

A lot took place in this formicarium. 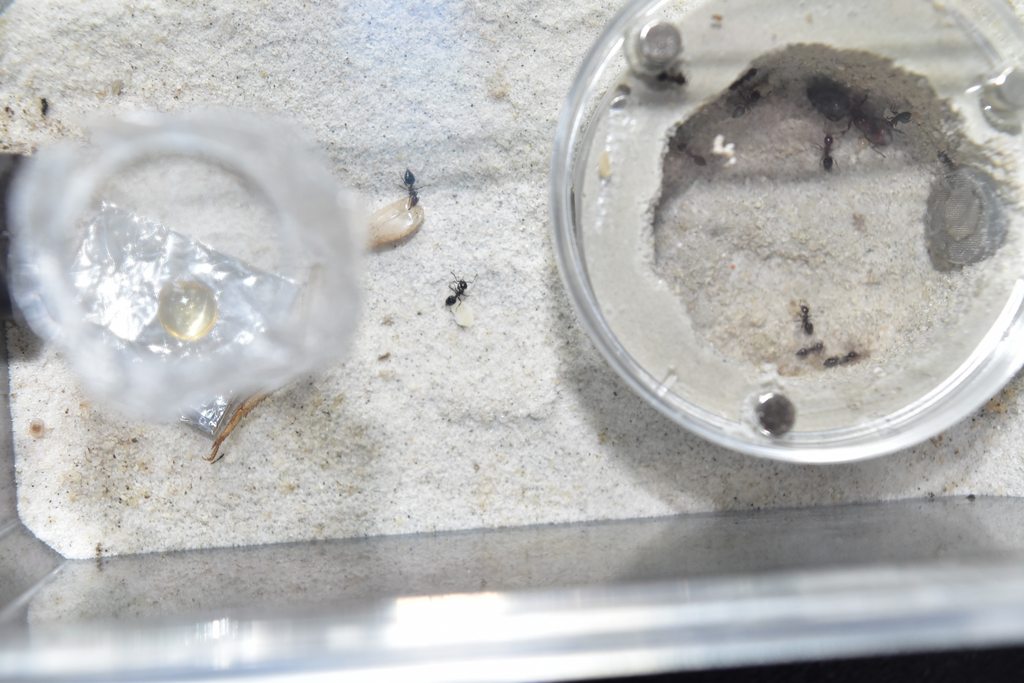 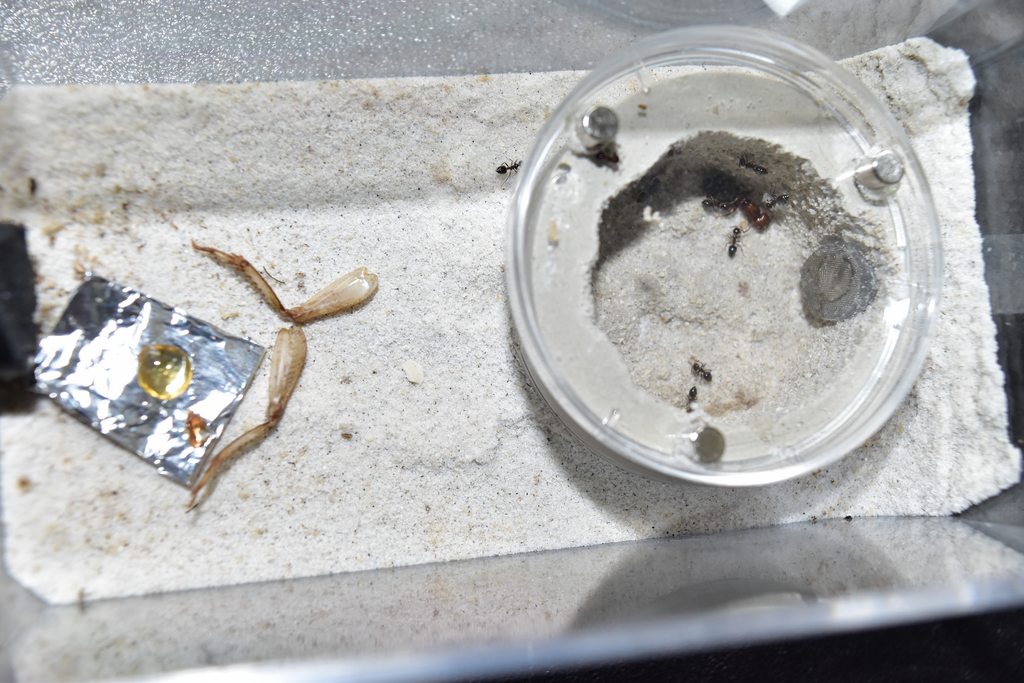 Here is a larvae they force fed a a larder before draining it. 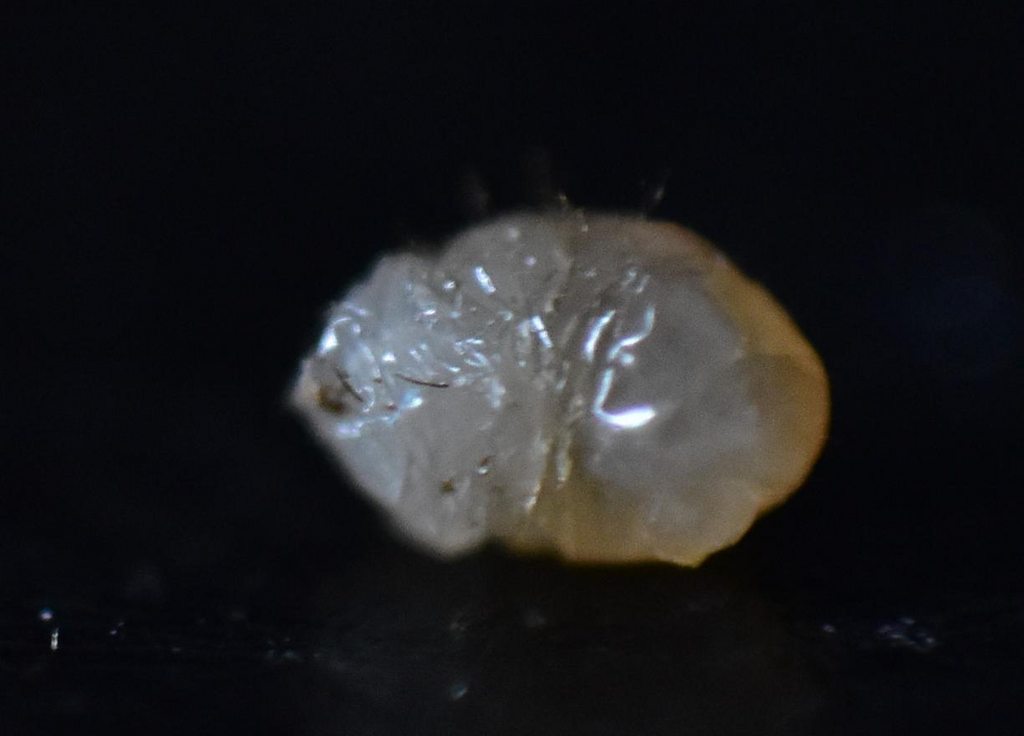 Sorry for the grizzly losses. This is proof that whatever species of Crematogaster you have is NOT polygynous (I think most aren't). Hopefully the remnant can recover, and in the future you can raise more queens separately. I think it's generally safe to assume that a queen is not polygynous unless you have clear data to prove otherwise.

Here's a video of them in THA Atom Nest. Can anyone tell what species they are?

I've madea strange discovery, I decided to put them in my closet instead of leaving them out with my other ants. For some reason they have large larvae now, I guess Crematogasters don't respond really well to light. The queen laid a clutch of eggs months ago, but they never hatched or they just ate and relaid them without me noticing. I've never had a problem leaving out colonies in light before until now.