77 replies to this topic

I would still keep her on the side. Sometimes queens just randomly die and it would be nice to be able to replace your queen.

I think you might have the same Pheidole species as the one in this video:

At first, I thought the same. But after cross exam the video and my species, I think there is a slight difference. The species in the video seems to have smoother appearance and the majors do not have dramatically large head as my species. I can't be 100% but it doesn't really matter. Too many variant in Australia, I found even the sugar banded ants have slight variety in different state.

Unfortunately the new queen died, due to unknown reason. The abdomen is flatten and dried up, possible parasites from the water.

On another hand, good news is that the major worker has finally eclose. She already tried to get into action and push away other minor workers to go up. 3 minor workers have to hold her down by biting on her antennae. A video has recorded for this moment. 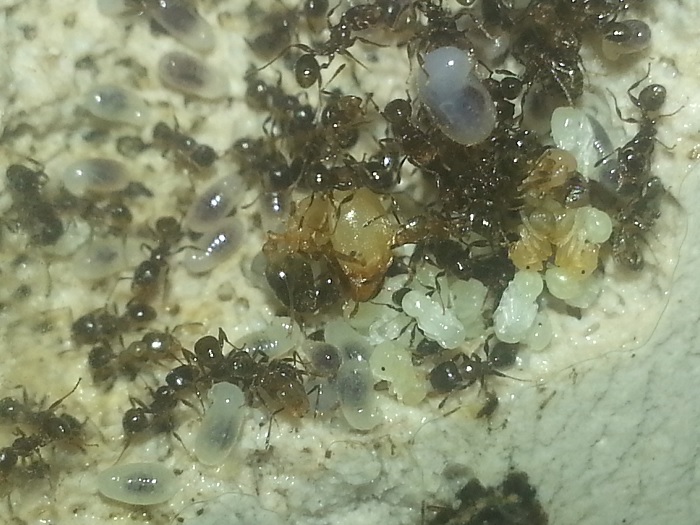 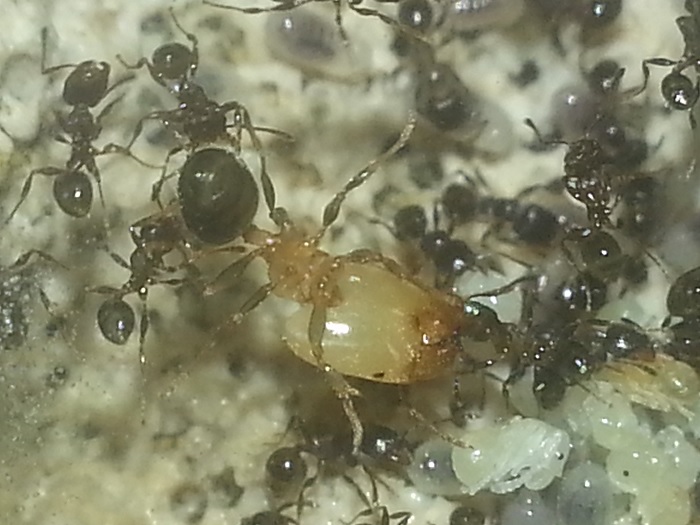 The major worker has become a bit darker now. She also moved to the chamber where used to be garbage dump. The ants have clean the chamber and removed all the garbage. Therefore it is still quite dirty on the glass and hard to take a clear photo. 8/1/2016
The major worker is getting even darker. I plan to give them the grass seeds in a week's time so the major is ready to crush them. Meanwhile all the majors are still retreat to the very bottom chamber when there is danger alert. One of the alate queens has finally eclosed. The wings are well groomed and look after by the workers. I wonder if this species mates within the nest?

Don't think they mate in their nest. Otherwise they wouldn't need nuptial flights. Although some Pheidole species are known for branching by mating within colony and super colony with multiple queens. Furthermore this colony don't have any drones. Hence I would need to find drones to test this out.

I know of species such as Tapinoma sessile that have nuptial flights and mate within the nest it is entirely possible.

I know of species such as Tapinoma sessile that have nuptial flights and mate within the nest it is entirely possible.

The thing is, this colony did not produce any drones, only alate queens. So my thought is, this colony is still young and with plentful food and resources, they make alate queens. When the colony get older, they start to produce drones and pass on the gene. This way they can share the survival of the gene globally, just my random thought on this phenomenon.

They could still produce drones. I agree they definitely have nuptial flights. I'm just saying they might breed in the nest because the colony is not at it's full grown size yet. This might indicate they are trying to speed up growth. Also other males could come from nearby colonies to mate in the wild.

They could still produce drones. I agree they definitely have nuptial flights. I'm just saying they might breed in the nest because the colony is not at it's full grown size yet. This might indicate they are trying to speed up growth. Also other males could come from nearby colonies to mate in the wild.

That could be the case too. Pheidole can have multiple queens in one colony indeed.

16/1/2016
I have found another queen, this time on the dry ground instead of the water. So far she is surviving well. The major worker has started her work, dealing with large difficult foods like seeds and insects. I have recorded her dissecting work in action. Thanks, yours is really nice too. The major in my colony only come out to help when the colony is low on food and has been hungry for few days. This way they will thoroughly process the food by cut up all the parts and feed to the larvae! When there are plenty of foods, the major will become lazy and just stay in the nest, carry out patrol, defense and storage jobs. The carcass will remain in the outworld. Fed them some seeds, which I processed them first in order to avoid germination within the nest. They have stored all the seeds soon after. One wingless queen got dragged outside and get dissected by the workers. She could be the one of the virgin queens who shredded wings. Other possibility is the original queen died from old age, but I doubt that. I guess also partly due to the fact that I haven't feed them for a while now even though there is always honey available. The other virgin queens with wings still alive though.

This morning I saw one of the virgin queens wandering out of the nest and appeared to be seeking to take off. Then she moved back to the nest afterward. I shined the led light into the nest to have a closer look. Surprisingly, this somehow trigger the nuptial flight again. So I quickly took some photos after removed the lid of the outworld. At one stage, she almost climbed all the way up to the top and the workers can be seen nibbling on her to encourage her. I tried to pick her up, but failed and ended up scared the queen back into the nest. Soon after, mass workers swarmed out to defend, so I had to leave them alone. 6/3/2016
I fed them a living grasshopper, the battle lasted for quite a period of time. In the end, the ants won, at cost of some minor workers got chewed up. Aftermath, upon returning to the nest, each soldier ant was cleaned by the minor ants at entrance. Just like science fiction movie, these soldier ants had returned from some rough battles in the barren outworld. This colony is very clean and well self maintained. I guess for me that is a good thing, the formicarium is kept neat and tidy without my effort. The video clip shows some actions during the battle, one of the soldier ants can be seen got kicked flying due to the powerful hind legs of the grasshopper.

Too dark, too crowded.