20 replies to this topic

No pictures, but unlike my other journal (of the Drywood termites) you can expect pictures in this one. There is actually stuff to see.

Also, I'm not 100% on the ID of Coptotermes. Hence why its put in ( ) with a question mark. There is that one termite that looks like them, out by Palm Springs. But, that is a desert species (that makes lots of "mud" tubes on dried grass and shrubs) and I'm nowhere near where they'd be. I'm pretty confident these are some type of termite in the Coptotermes genus, if not Coptotermes formosanus themselves. But, I could be wrong since if the desert species is anything to go by, it could be something similar to those. Seeing I'm in middle of a city however, and the area they are in has been entirely changed with landscaping and lots of new plants...that makes it more likely for it to be Coptotermes.

Now onto the journal.

(They are actually Amitermes californicus. Thanks for the help IDing them properly)

First thing I did was carefully get all of the termites out of the wood pieces I got, along with secondary reproductives. In the past, I've used 2.5 gallon plastic aquariums. But, those are too big and I can never see them. Instead, I liked the setup my Drywood termites are in and used the same type of glass jar I used for them (different jar of course). Its a pretty small jar, but should be good for a long time. Termites are often in cramped conditions. It should also be a far easier to maintain setup, and I'll be able to see them all the time instead of them disappearing into the mountains of dirt.

In total, I probably got an unknown amount of secondary reproductives and 100-200 workers/soldiers. Which isn't bad at all actually. Hopefully they succeed in making a good colony.

I don't know if C. formosanus has made it to the deserts. I know it lives in the southeast of America, along the gulf, and I think there have been reports in California, but I think those were along the coast. You could have one of two things from what I know - either Heterotermes aureus, or Reticulitermes tibialus, both from Rhinotermitidae, both building mud tubes, and both looking somewhat similar. Pictures of a soldier would help confirm an ID.

I don't know if C. formosanus has made it to the deserts. I know it lives in the southeast of America, along the gulf, and I think there have been reports in California, but I think those were along the coast. You could have one of two things from what I know - either Heterotermes aureus, or Reticulitermes tibialus, both from Rhinotermitidae, both building mud tubes, and both looking somewhat similar. Pictures of a soldier would help confirm an ID.

Yeah, there is no C. formosanus out there in the desert. I know LC3 has said what they are in chat, but I always forget. They kind of resemble Coptotermes, because of the egg shaped heads on the soldiers but are actually different and actually have a bit longer mandibles.

The ones I have have also have the egg shaped soldier heads. I'm pretty sure they are Coptotermes especially given the fact everything here was imported from other places. But like I said they could be something that looks similar. I'm pretty positive with the ID though.

Let me get some pictures of the colony, I'll come back in a few minutes with new pics. I dunno if I'll be able to get any soldier pictures though, since they are already in the jar. But, its a good time to see the workers and what not.

Than the typical rectangular heads of most native termites.

But, maybe a second person will have an opinion cause my eye glasses are screwed up and have bad eye sight cause of it and even looking at the computer screen is blurry lol. So my ID guess probably way wrong. No money for new glasses sadly. Anyway...took a while to get one of the soldiers to come out, and the pictures came out pretty good (can even see the mandibles!). The termite jar itself none of the pictures came out that great. One came out okay though. I need different lighting and background for proper pictures of the jar. 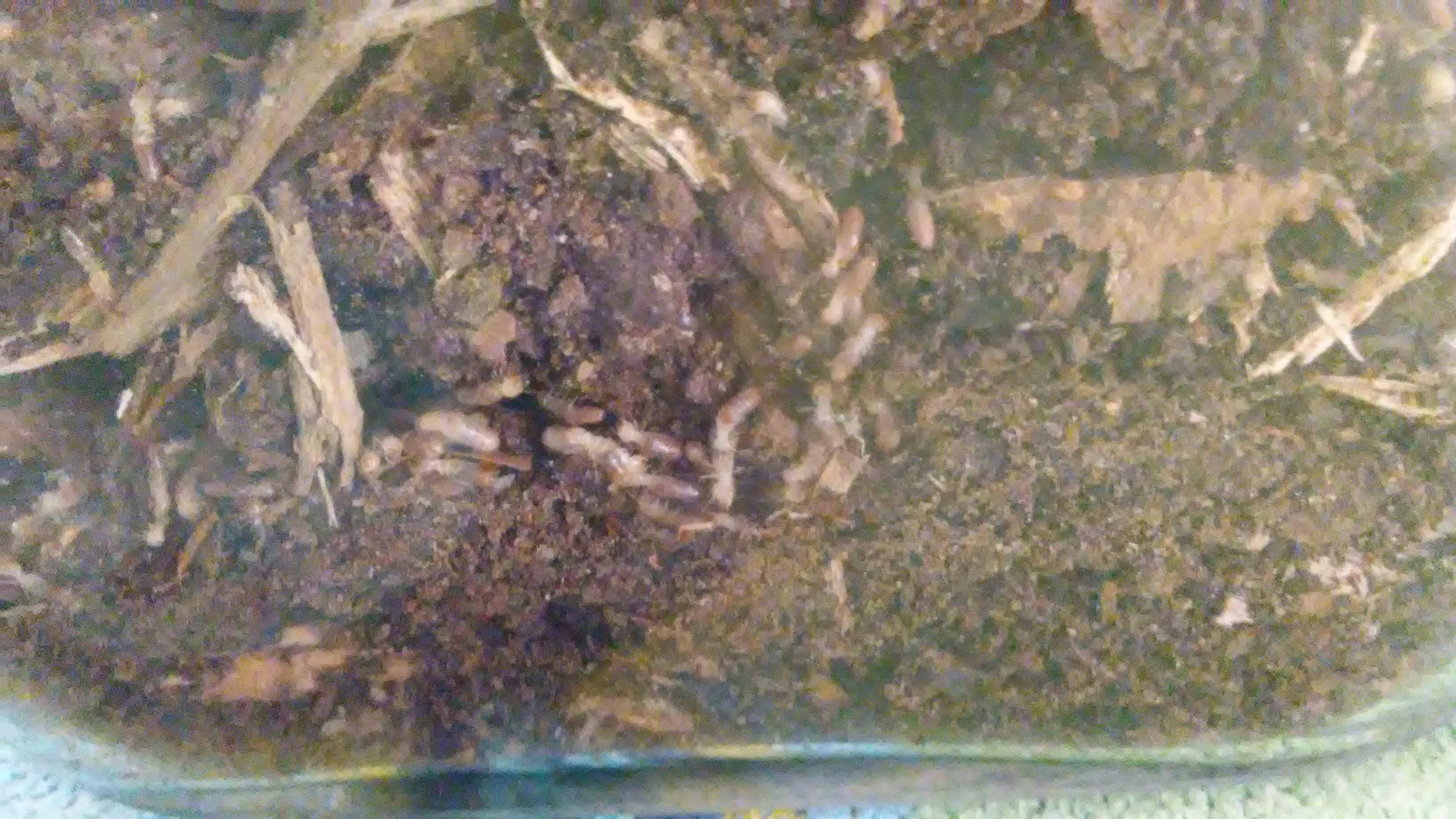 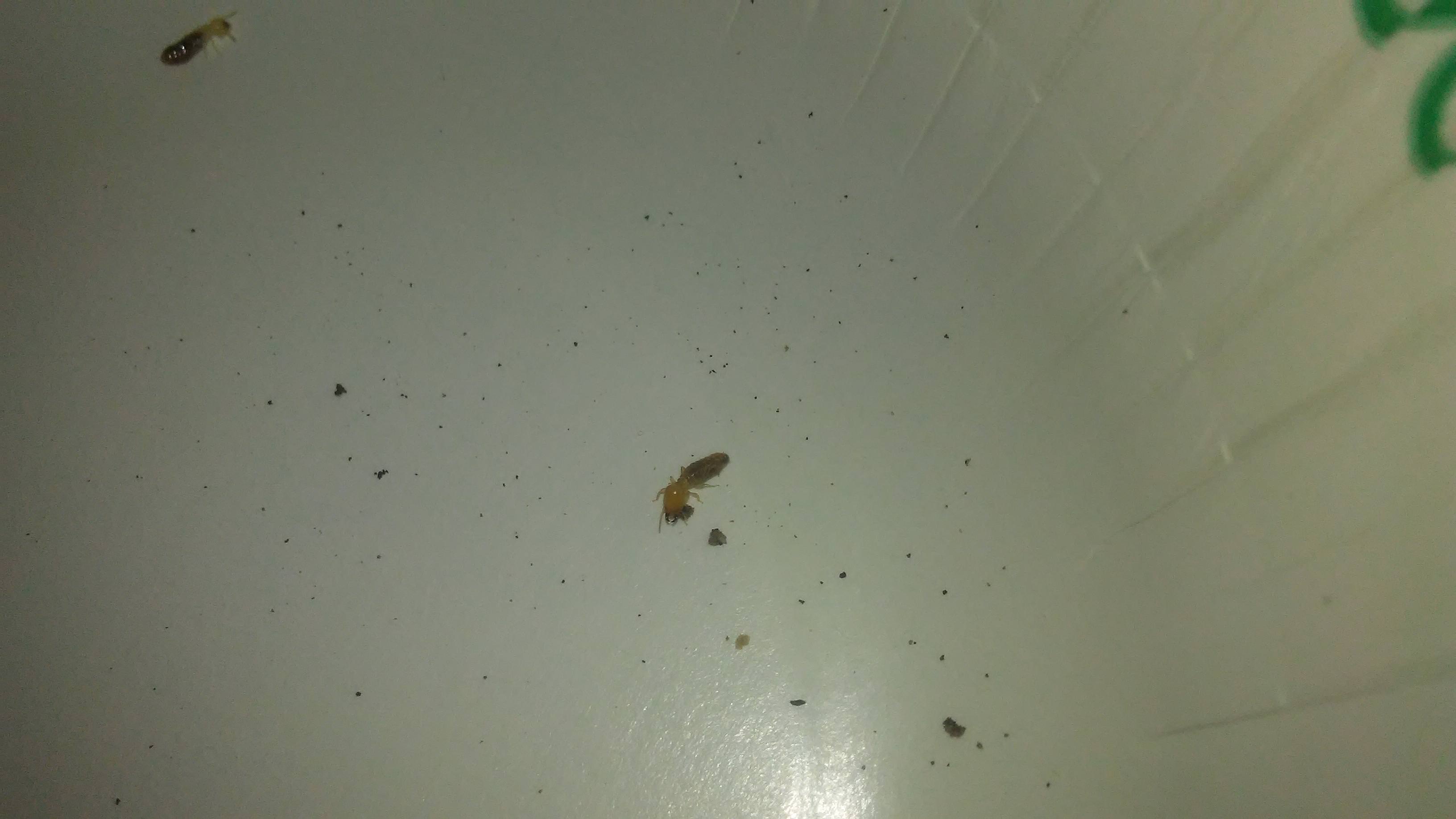 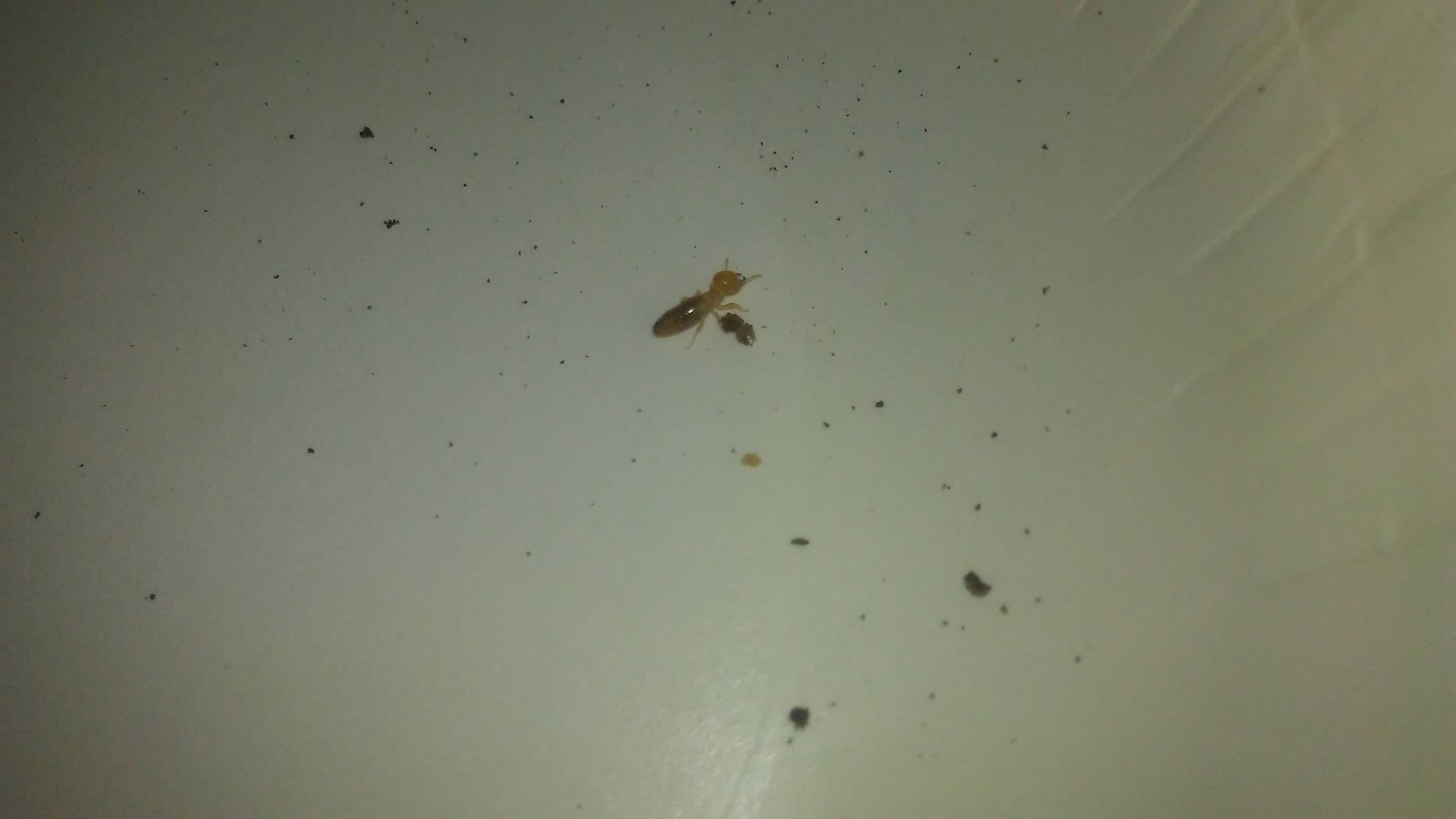 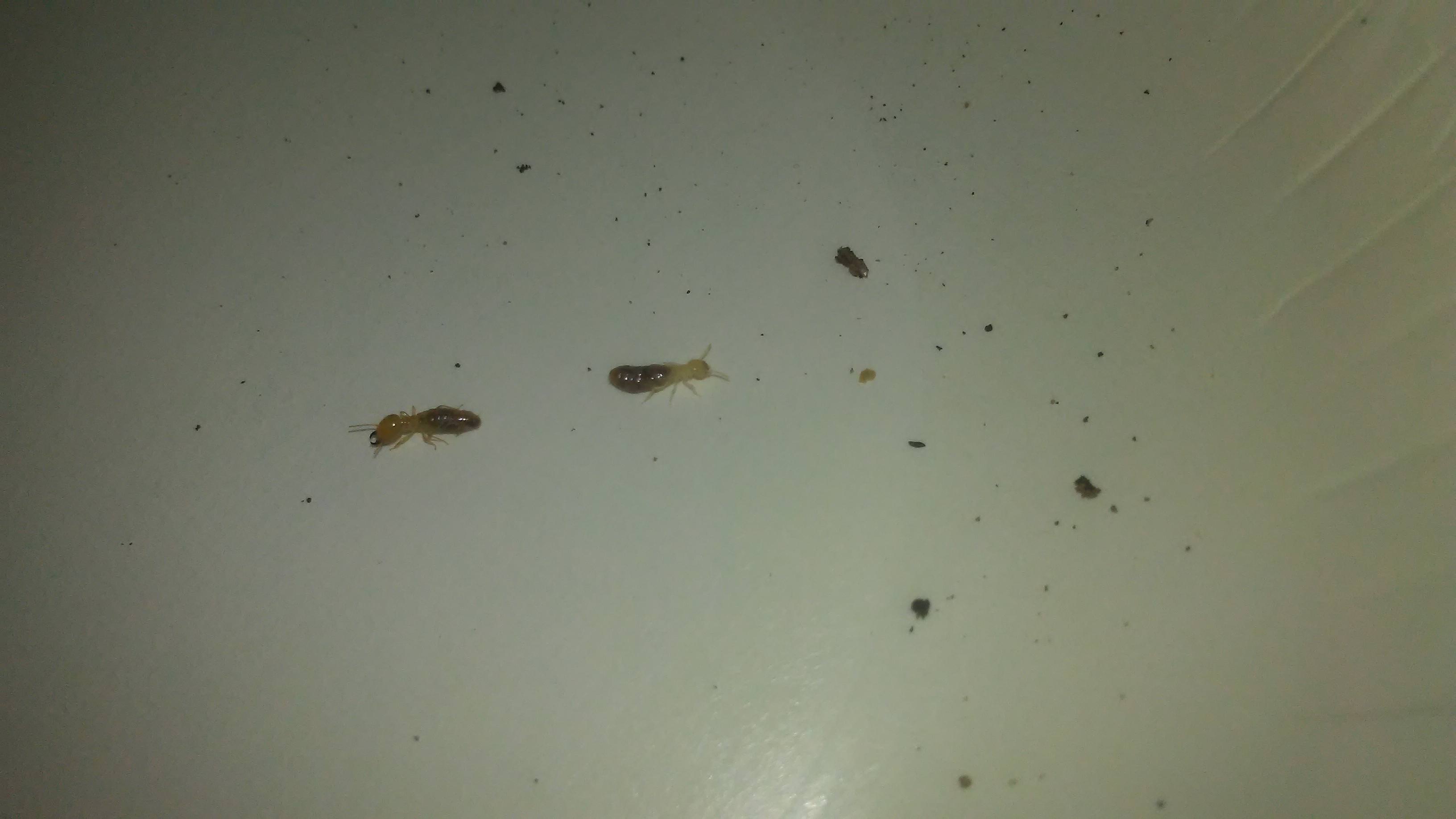 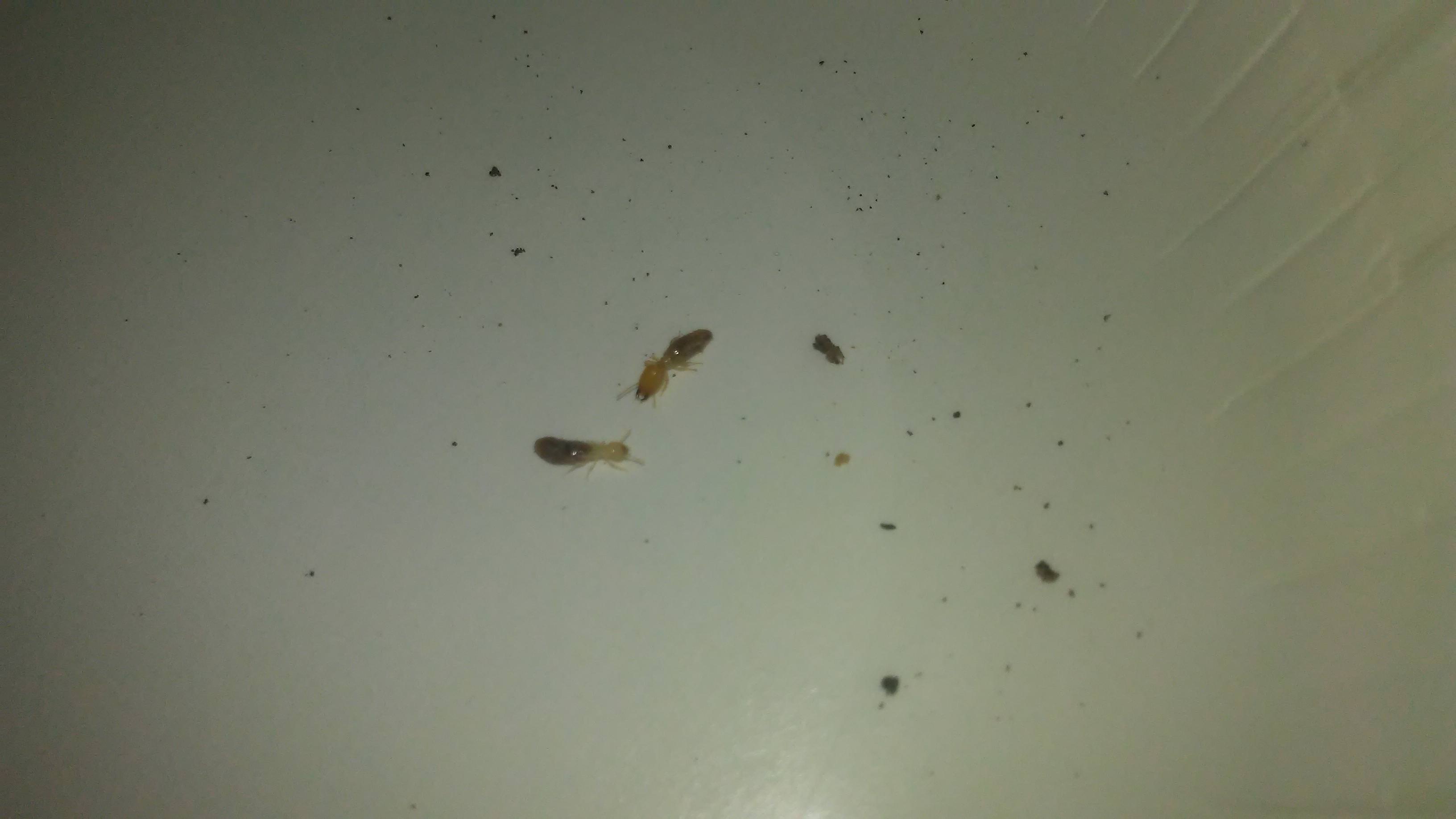 Wow those are Amitermes. From what I can make out of the mandibles in the second and last picture these key out to A. californicus.

Some info: They feed on just cellulose stuff from what I know, wood, grass, cacti, cow patties, fungus on wood. They are normally absent during the summer and come up during the spring and fall to feed. They have a really low percentage of soldiers, something like 1-2% of the colony. This applies to Amitermes in the US in general.

This is really odd. I used this site to try and ID what sort of subterranean termites you have: http://entnemdept.uf...eterotermes.htm. Based on your pictures, though, it's none of these three, so none of my earlier guesses. Your soldier's mandibles look alot shorter and rounder than Coptotermes, Reticulitermes, or Heterotermes. As well, something about the colouration of the workers looks a bit off - my termites lack that much of a dark area on the abdomen, as does Coptotermes I believe. Also, I misread earlier. My bad, I thought you were saying that you were near a desert, not that you aren't. This changes the whole range of species that this could be. Maybe make a post in the Termite ID subforum - perhaps a more knowledgeable member will come along and be able to solve this.

EDIT: Speaking of which, LC3 posted whilst I was writing this. So mystery solved.

That is lucky! A lot better than Coptotermes in my opinion. The Amitermes I found in the Palm Springs area were a lot of fun to keep. They are (at least the ones I got out there, not sure if all would have similar behavior) as active as some ant colonies are. I remember mine would always be exploring and making mud tunnels over twigs and what not. They were a lot of fun to watch. Hope this colony ends up the same.

The colony is still doing great. Some of the secondary reproductives are both a bit longer and fatter. They've dug up a lot of the soil in the jar already, and there are so many termites. I might actually need to find something bigger for them (that still allows them to move on their own, I don't want to kill them by force moving them), since they number easily close to 1,000 in numbers.

How do you go by locating subterranean termite colonies and getting secondary reproductives?

How do you go by locating subterranean termite colonies and getting secondary reproductives?

Not going to be much help, but I just go where dead wood has been laying around for a long time. That can be a dead tree or logs/wood on the ground. But, a lot of the times there'll just be ants or spiders instead. So, its a bit of random luck.

Best time to get termites though is in the Winter after a rainstorm. On rare occasions they'll be in an irrigated urban area and easy to find any time of year. But in urban (Southern) California, irrigation almost always mean Argentine ants are far more likely instead.

Do they come out more in the winter or something?

Do they come out more in the winter or something?

Yeah. Termites in general like all the wet soil, wood and rainy weather. I found another species that I'm not entirely sure what they are, but I found a whole bunch of them during the thunderstorms we had a few days. Granted I found them before the rain happened, but not nearly as many.

Pretty much for southern California, I kinda see ants being a spring/summer insect (in general, many ants of course are active year round) and where as I see termites are generally more a Fall to early Spring insect.

The Amitermes are doing great as usual. I really need to give them a bigger setup though, but haven't had time. I'm gonna try giving them a better home tomorrow though. I have a plastic aquarium that be suitable so all I really need to do is go get dirt and fill it up. Take like 30 minutes at most, just need to find 30 minutes of free time.

But their numbers haven't shrunk at all, and there is just as many as before.

I plan to. Not sure when though. Dads work stuff is in the way of the shelf I can use to take pictures of the bottom of the jar. And I don't want to move or touch his things for his work. Though not sure if I'll be able to get a picture of the queen or not by time his stuff is cleared out.

Huh I also expected it to take much longer. But then information on this species seems very scarce (as with the other South west Amitermes sp.). Yay data.

Anyways I probably should have posted this here much earlier: 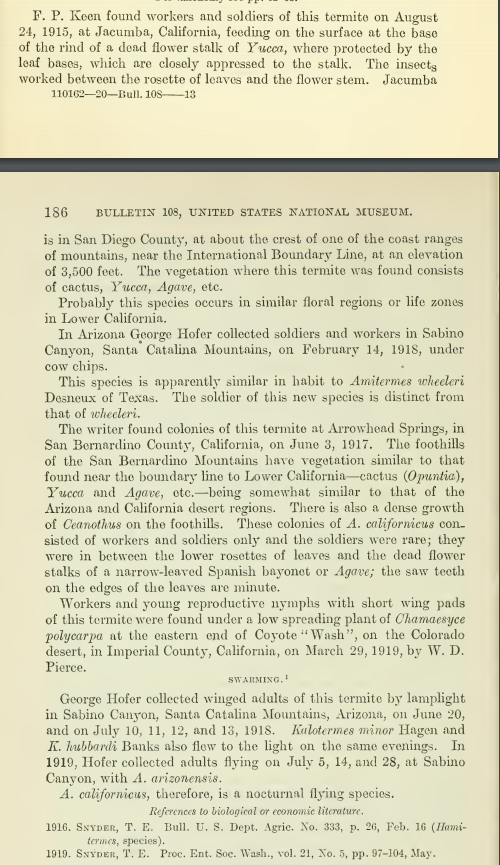 From: A revision of Nearctic termites by Nathan Banks, 1920.

Thank you for the info

It seems the ones here are in a completely different environment than where they say that is. Granted, the foothills would match their native habitat it sounds like. And I've actually found Amitermes in the foothills after it rains. This particular colony though, the area I found them in has been transformed by irrigation and landscaping.

But now that I think about it, I think the vast majority of the subterranean termites around here are Amitermes. I've found them in three different areas now in not too widespread area. I always wondered what they were because the soldiers looked different and didn't seem like they had many soldiers. They are most common subterranean termite locally here, and never put the two together until I read through what LC3 posted and their environment.

Also no pictures of the queen, dunno where she went. And the pictures came out okay, too much reflection though. But hey they are pictures.

I gave them a much needed upgrade to their home. 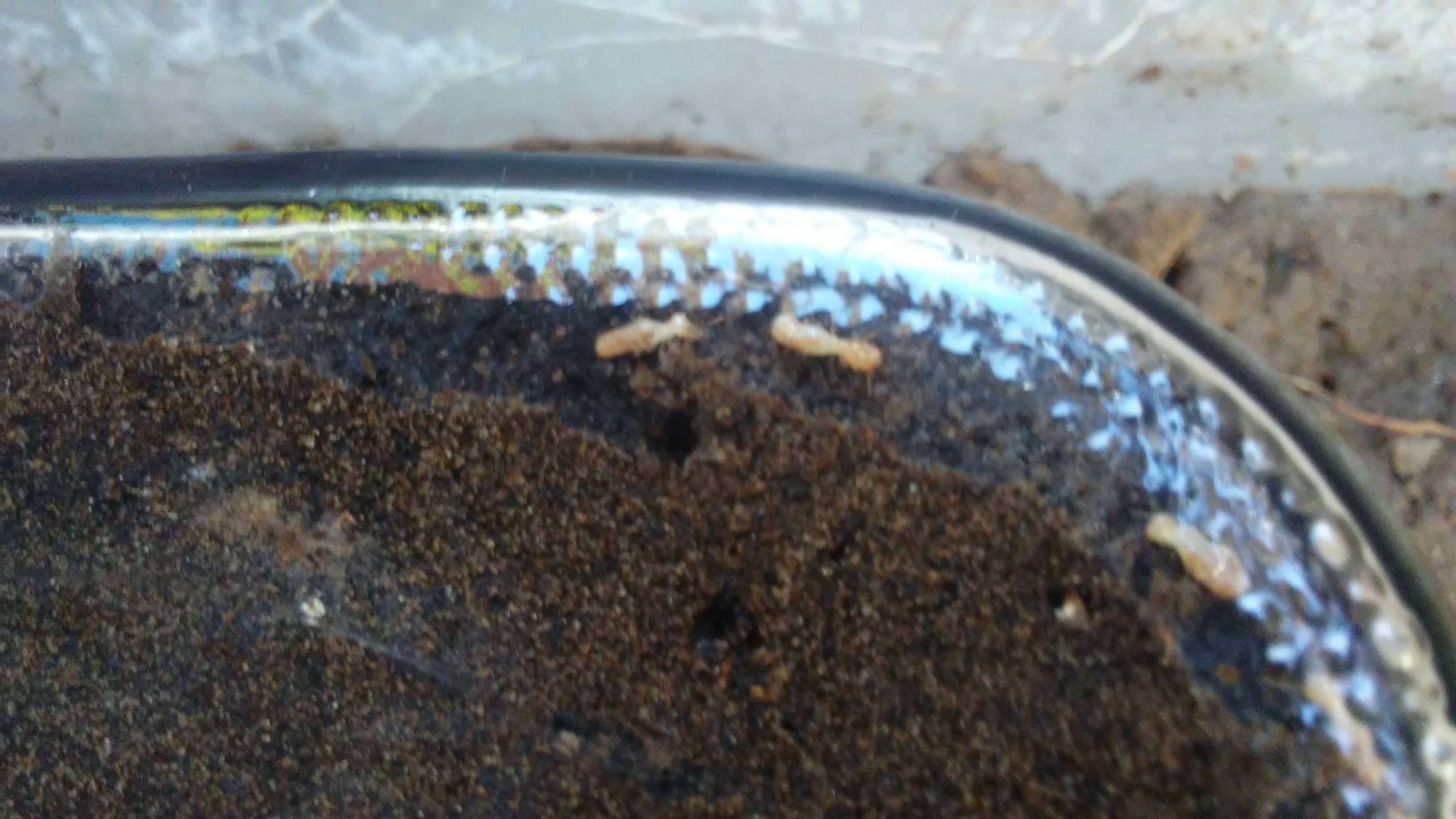 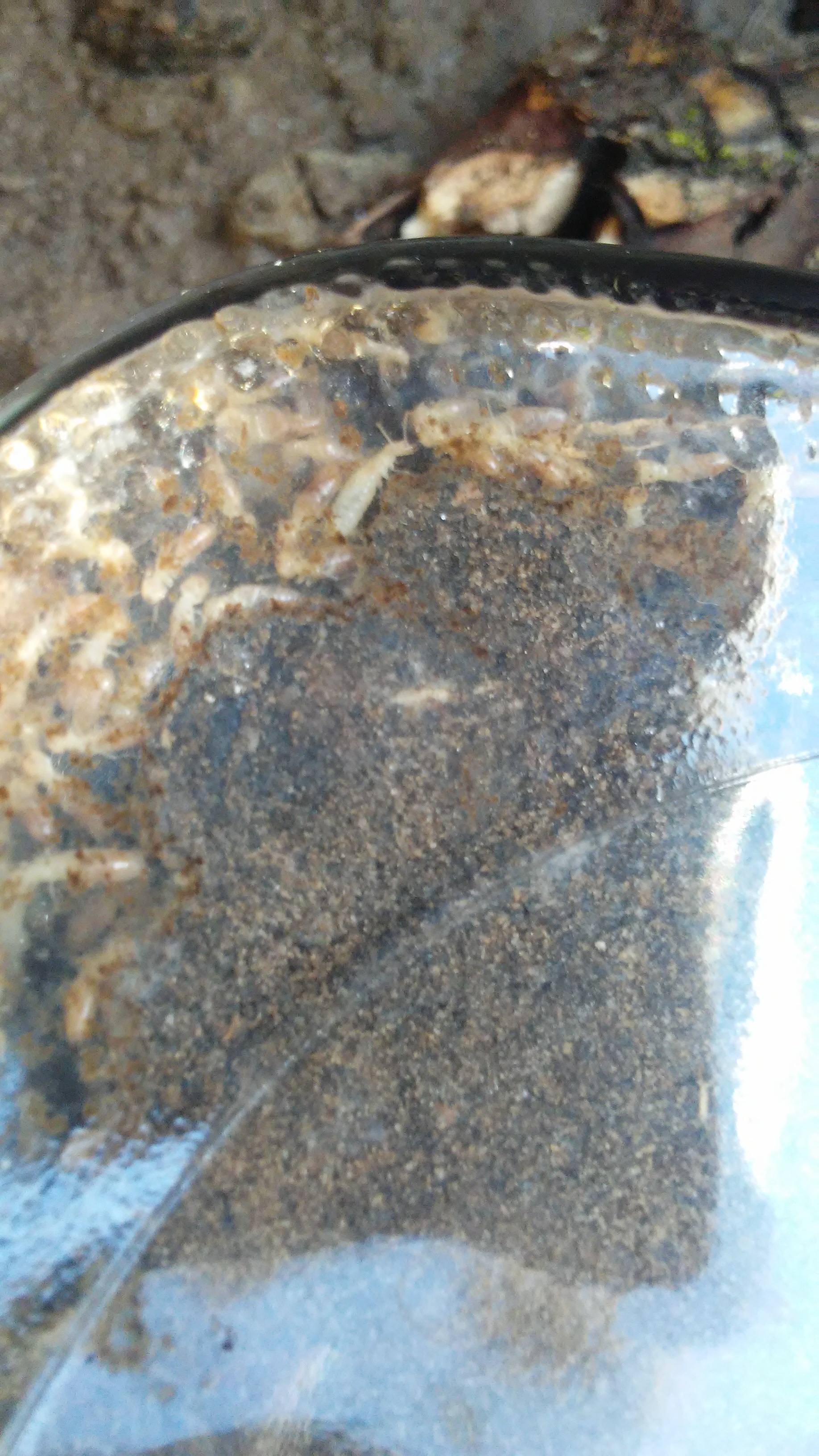 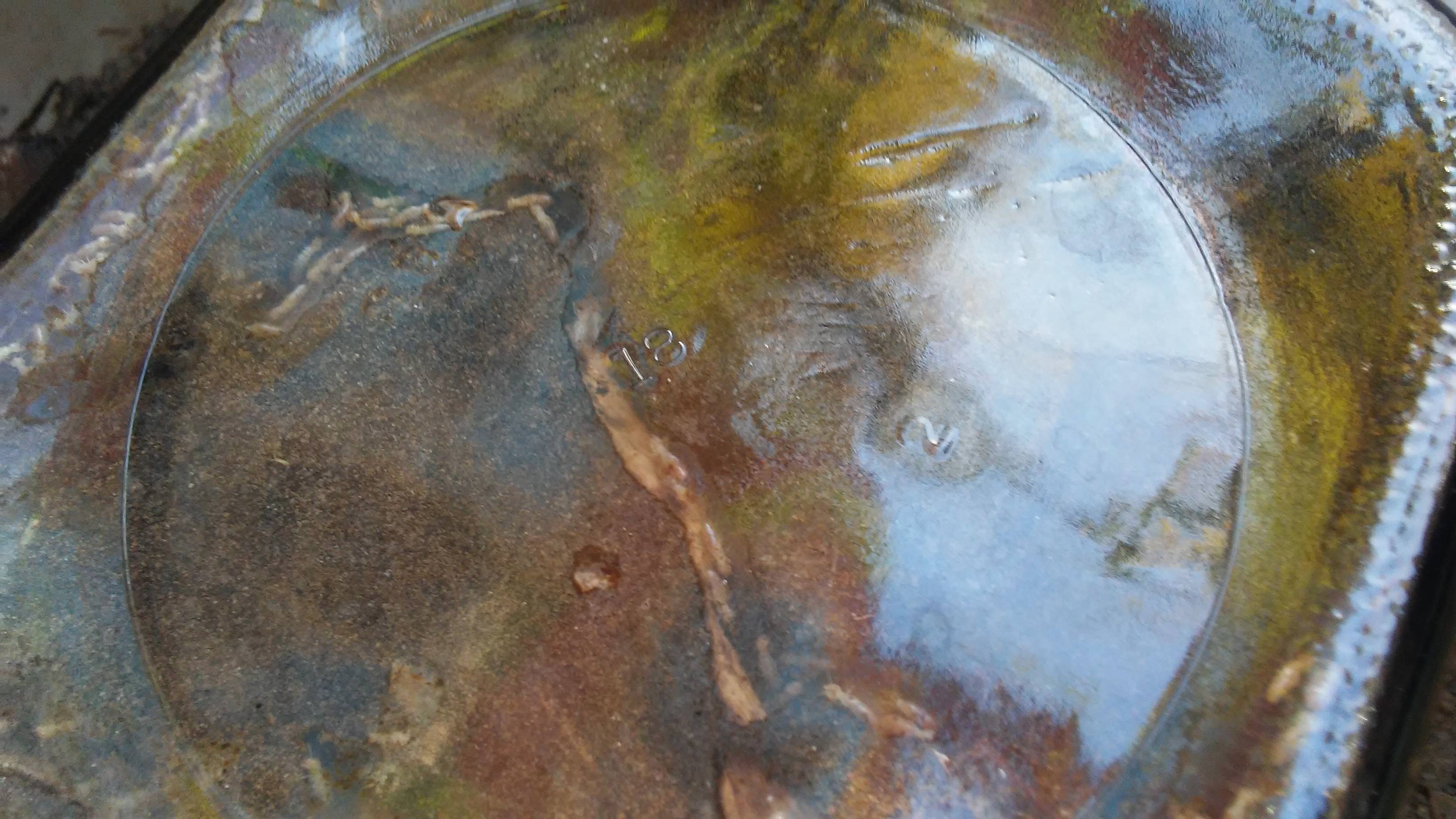 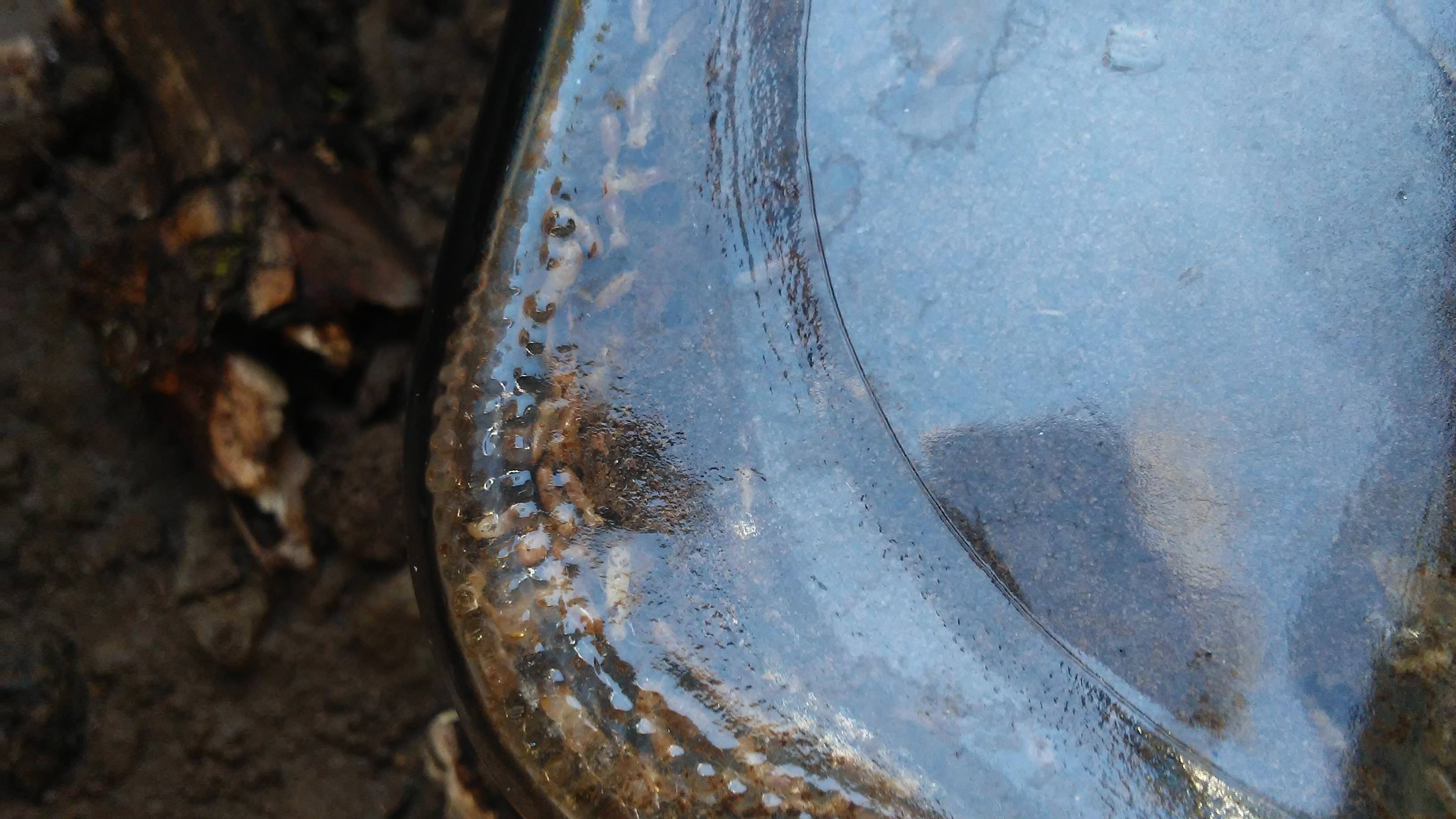 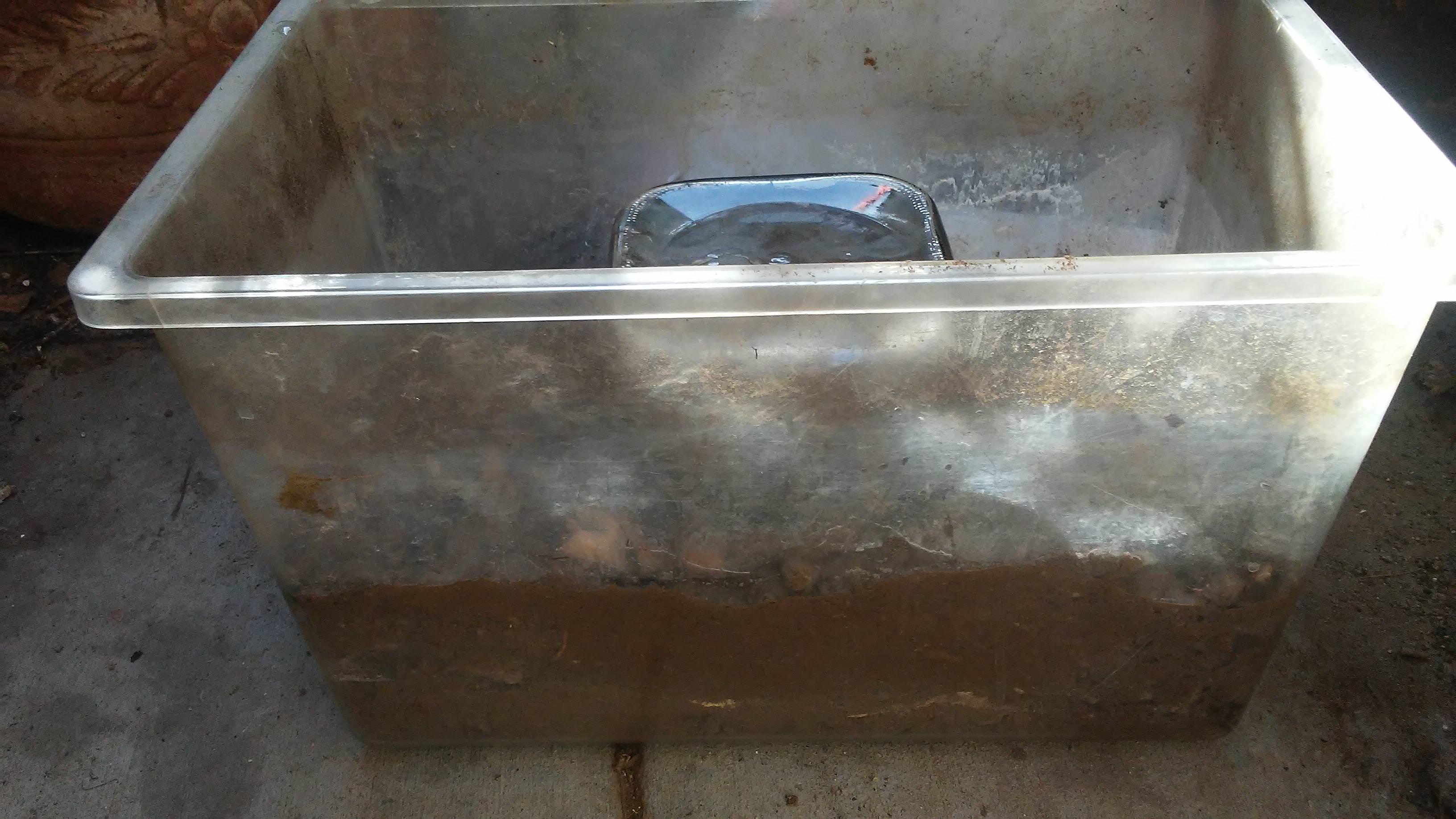 For such inconspicuous termites they seem suprisingly active.