40 replies to this topic

Hey everyone, it has be three years since I last update my last post on my Drywood termite colony living in there dowel home. The colony is about nine years old now, which they are doing great and growing larger since the last time I showed them off. I'm guessing the colony is up to 250 to 300 members almost and I've seen a many young wing alates walking around the colony now. I hope I can start some offshoot colonies with other alates soon once they are mature. Here are some picture of the daily activities they do in there colony. A lot of the workers tend to casual forage around and soldiers wander around looking for a fight. 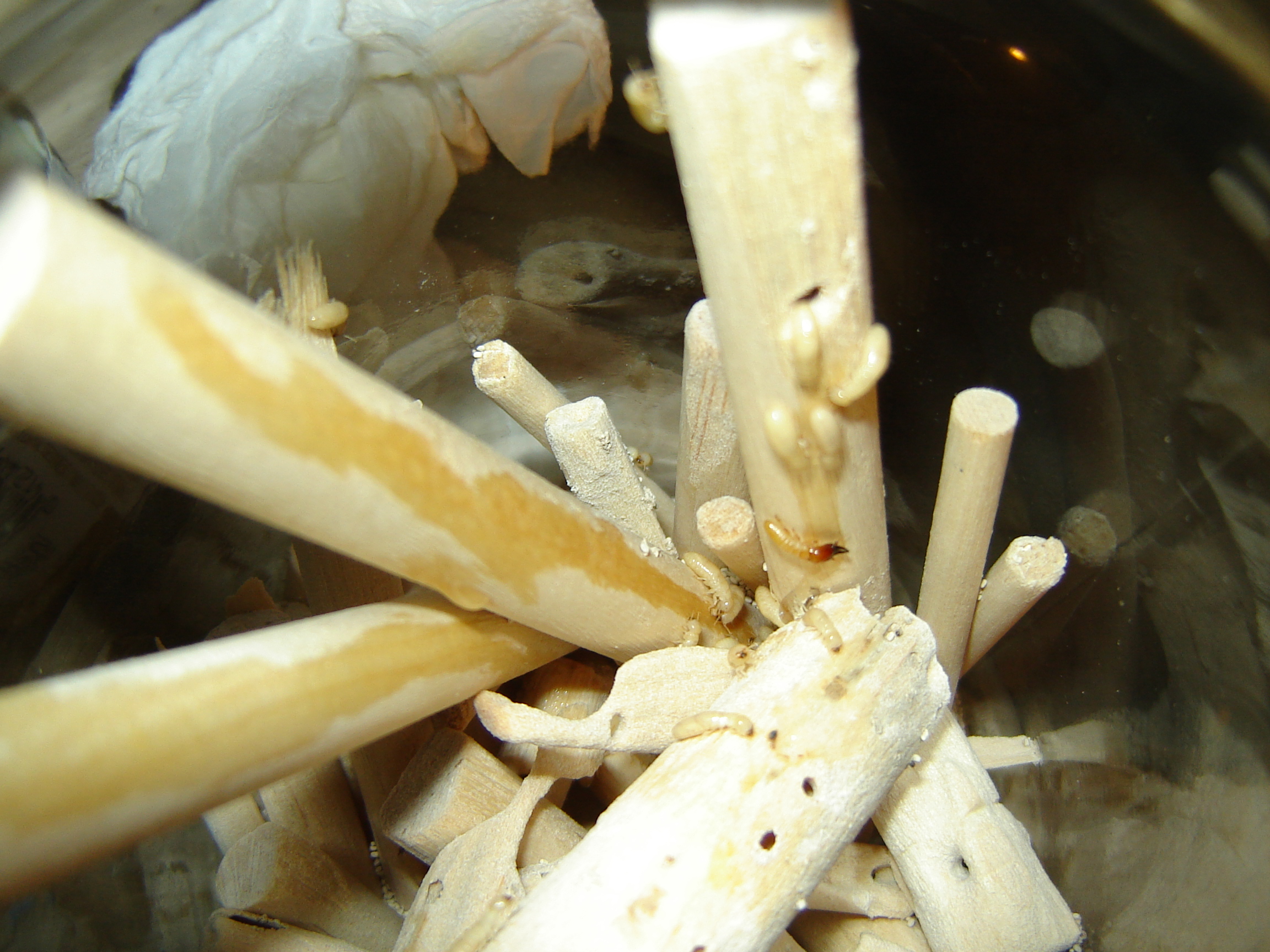 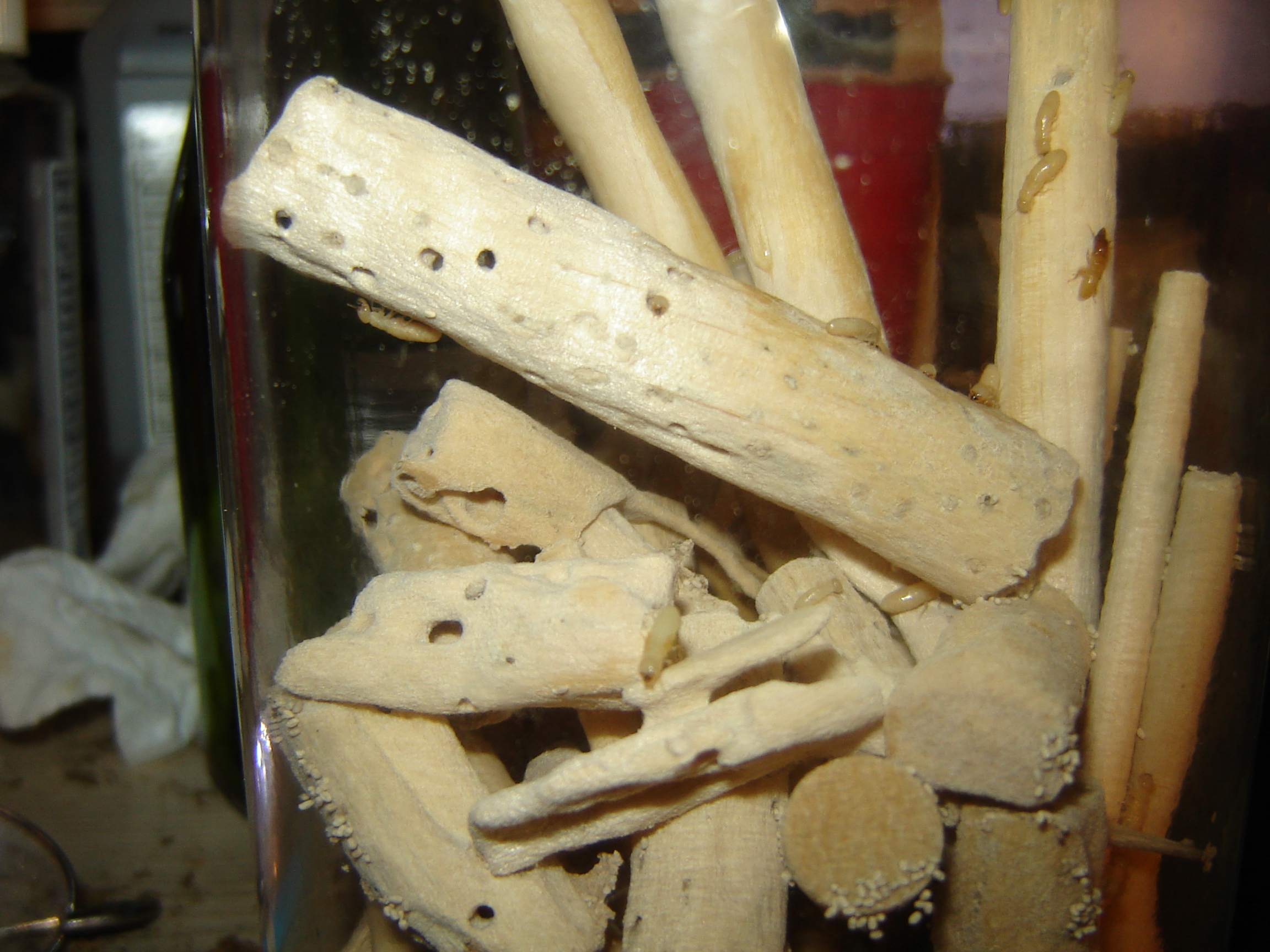 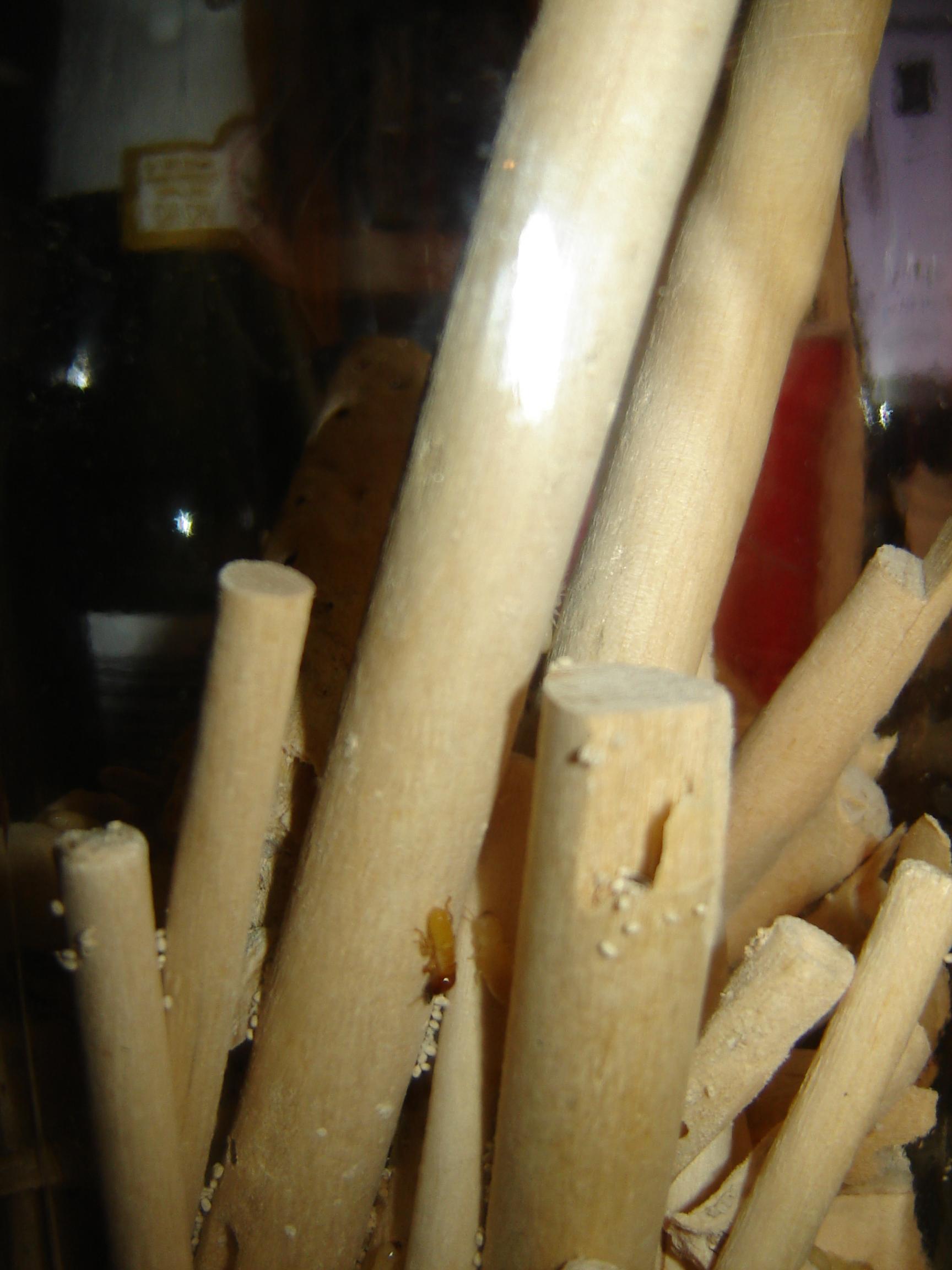 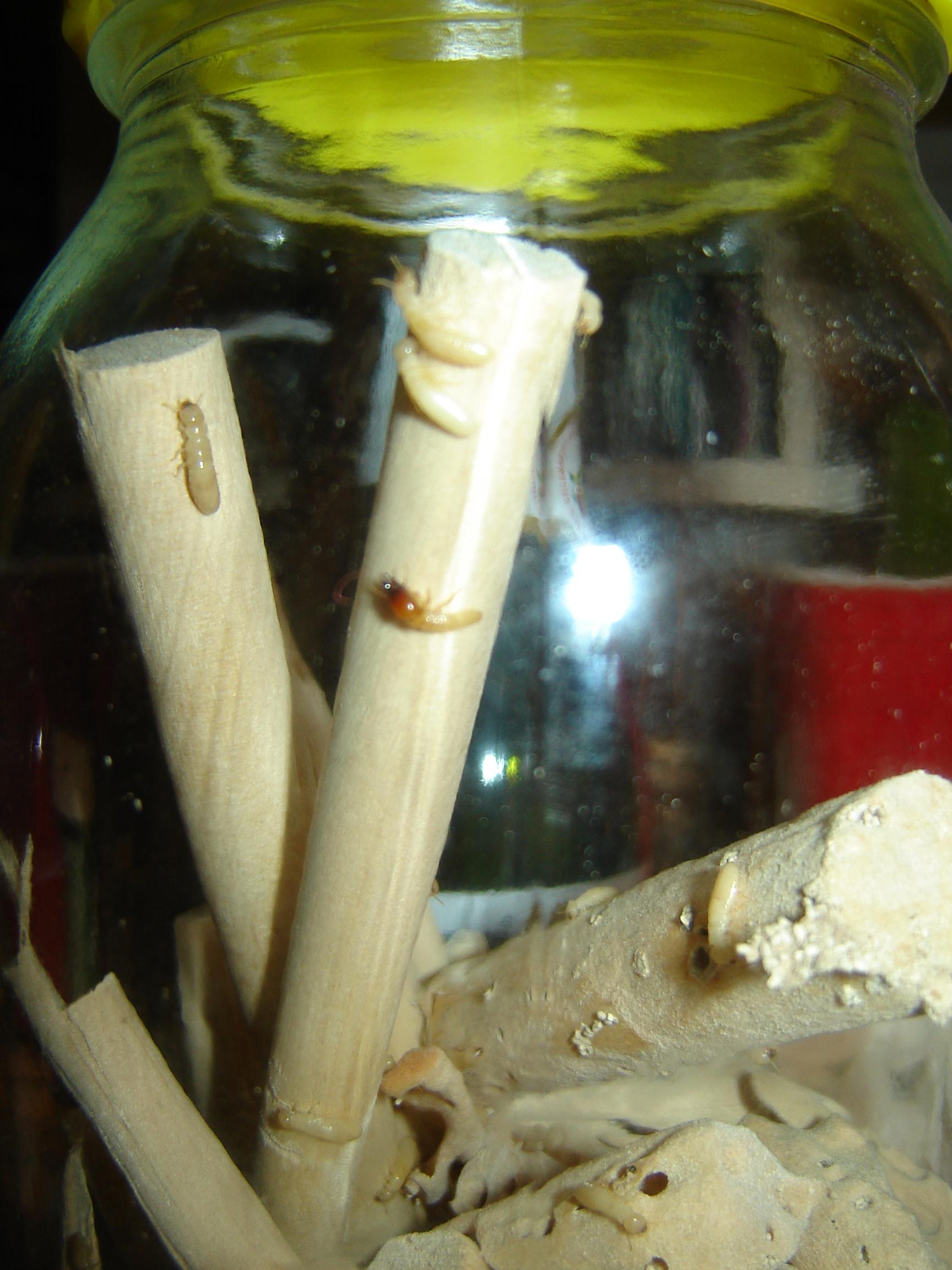 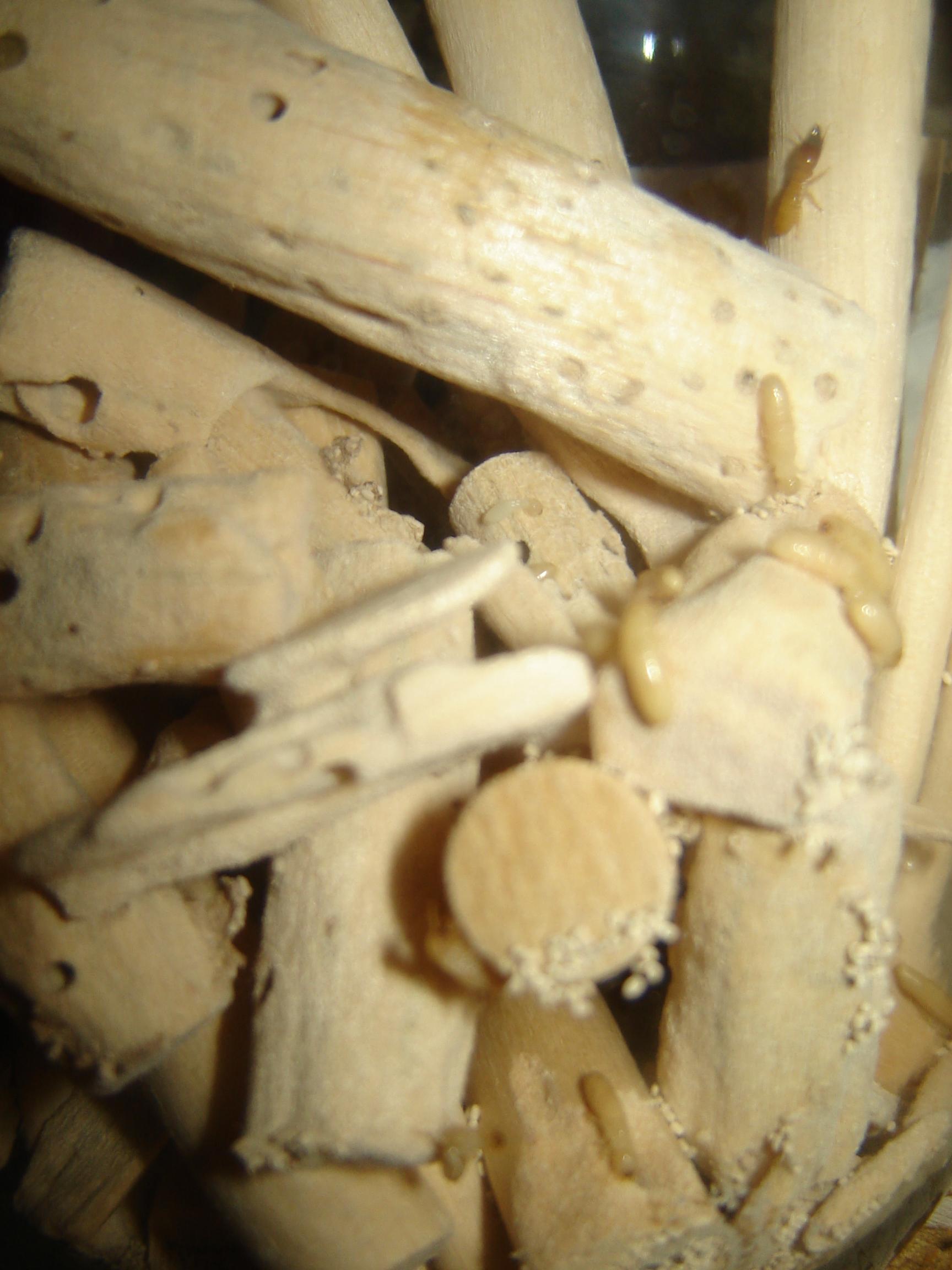 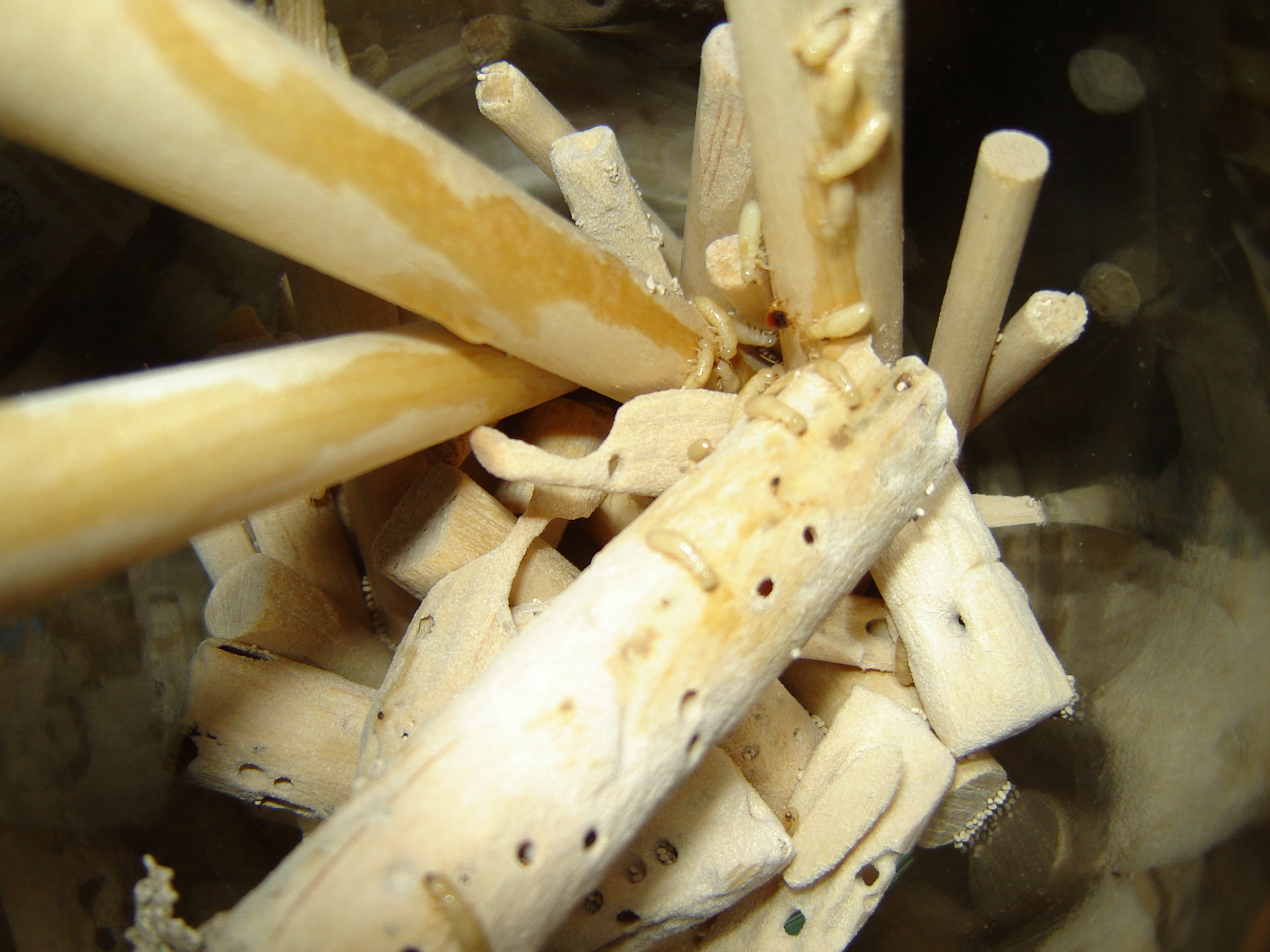 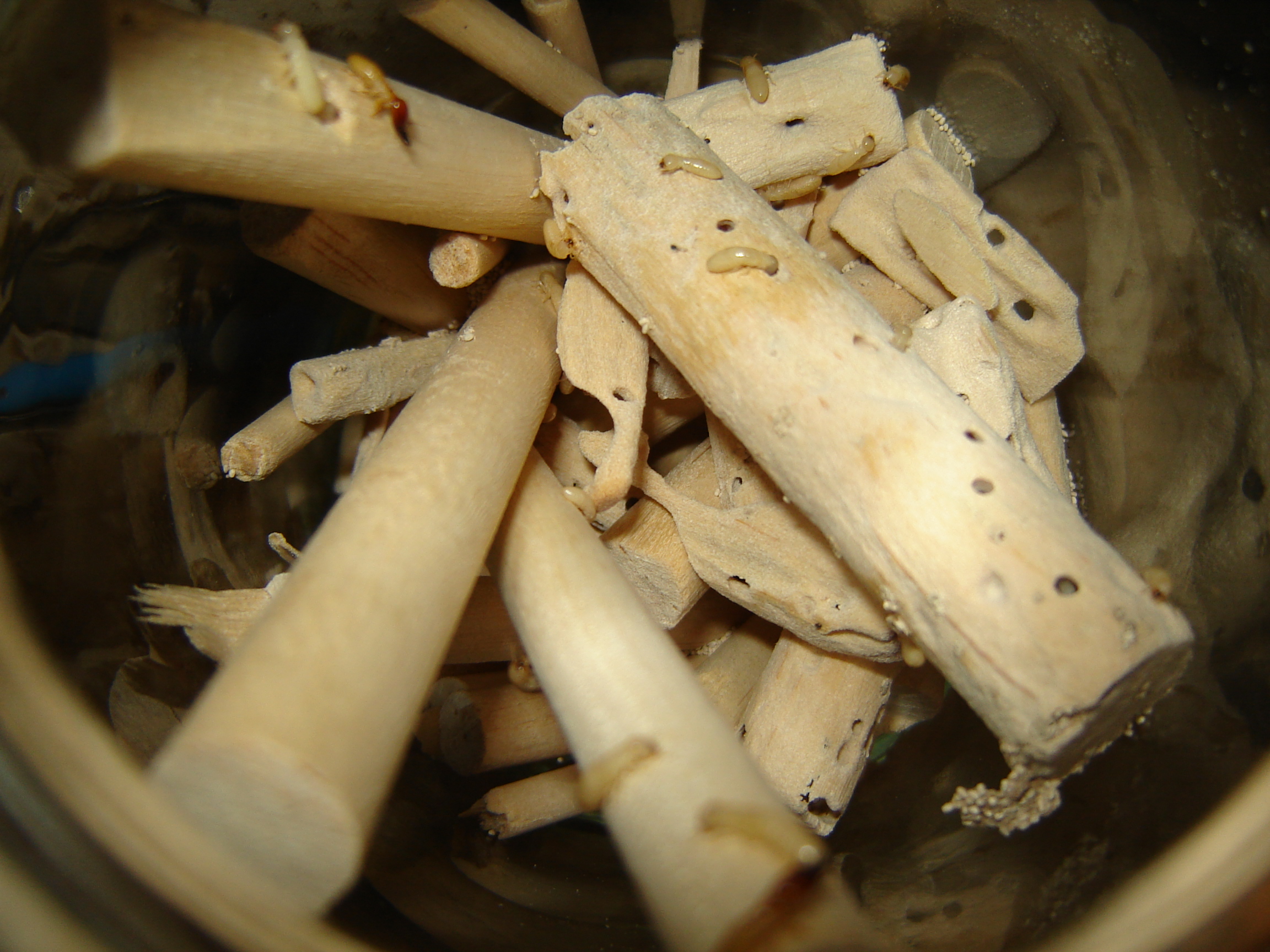 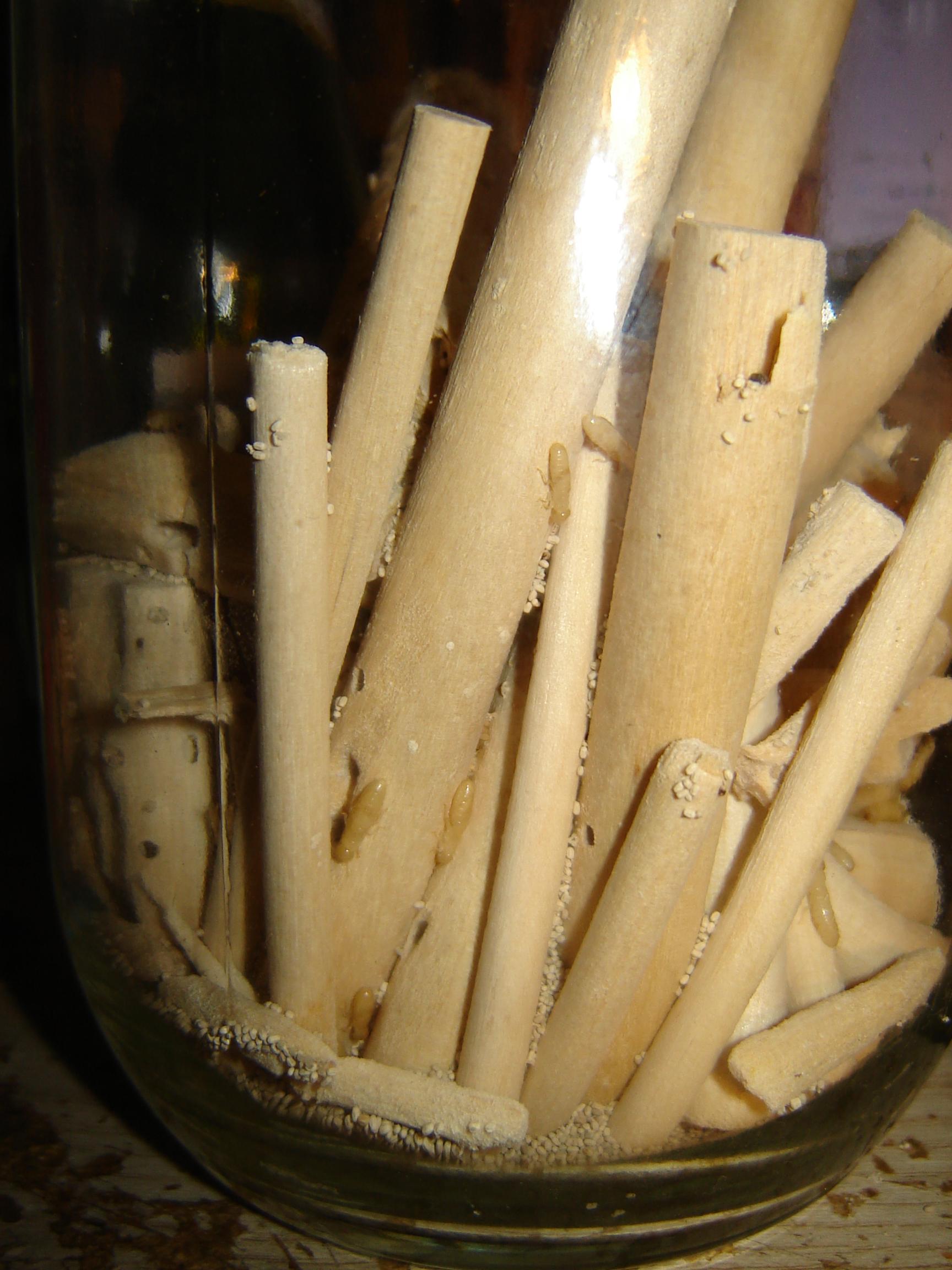 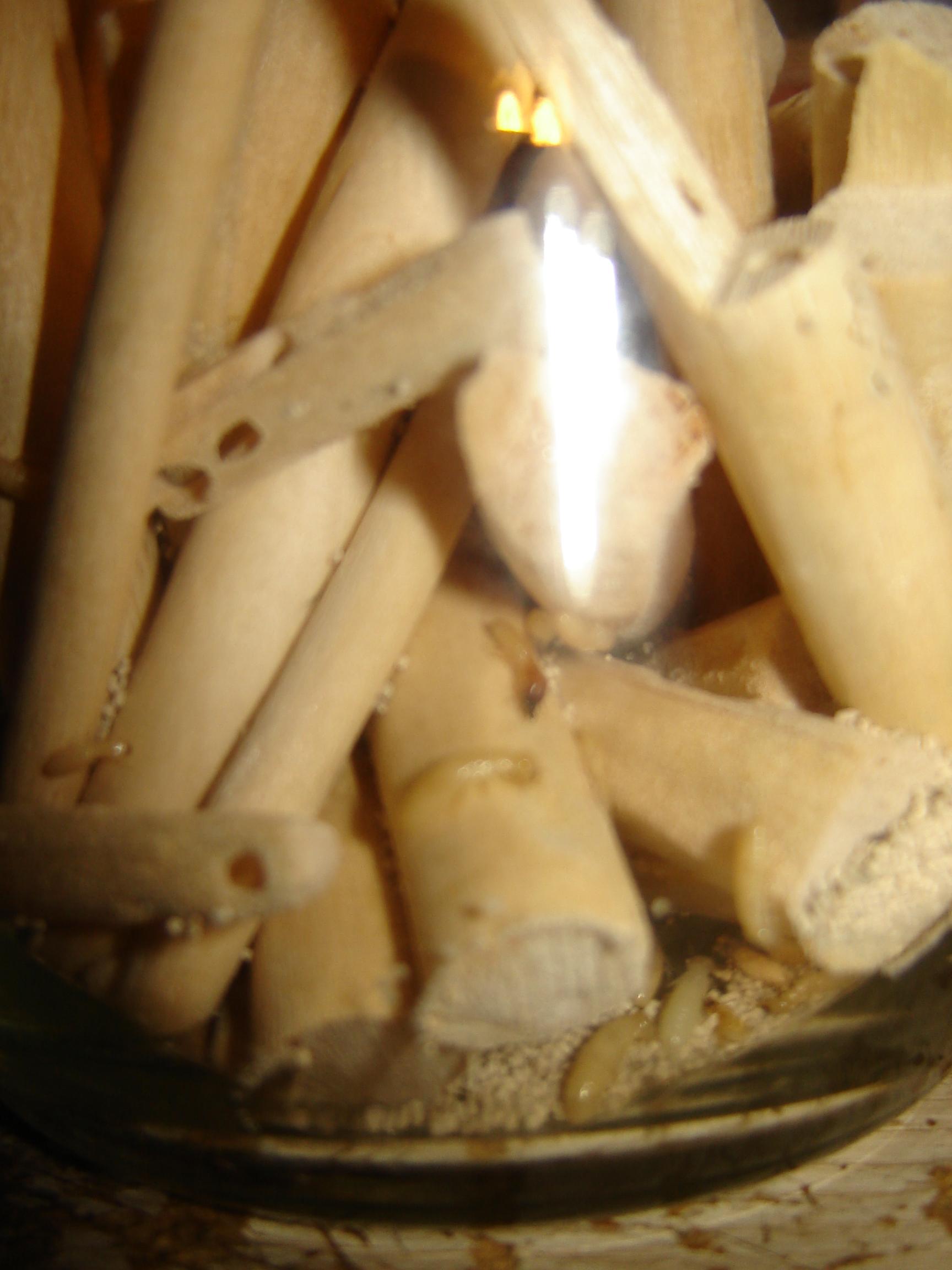 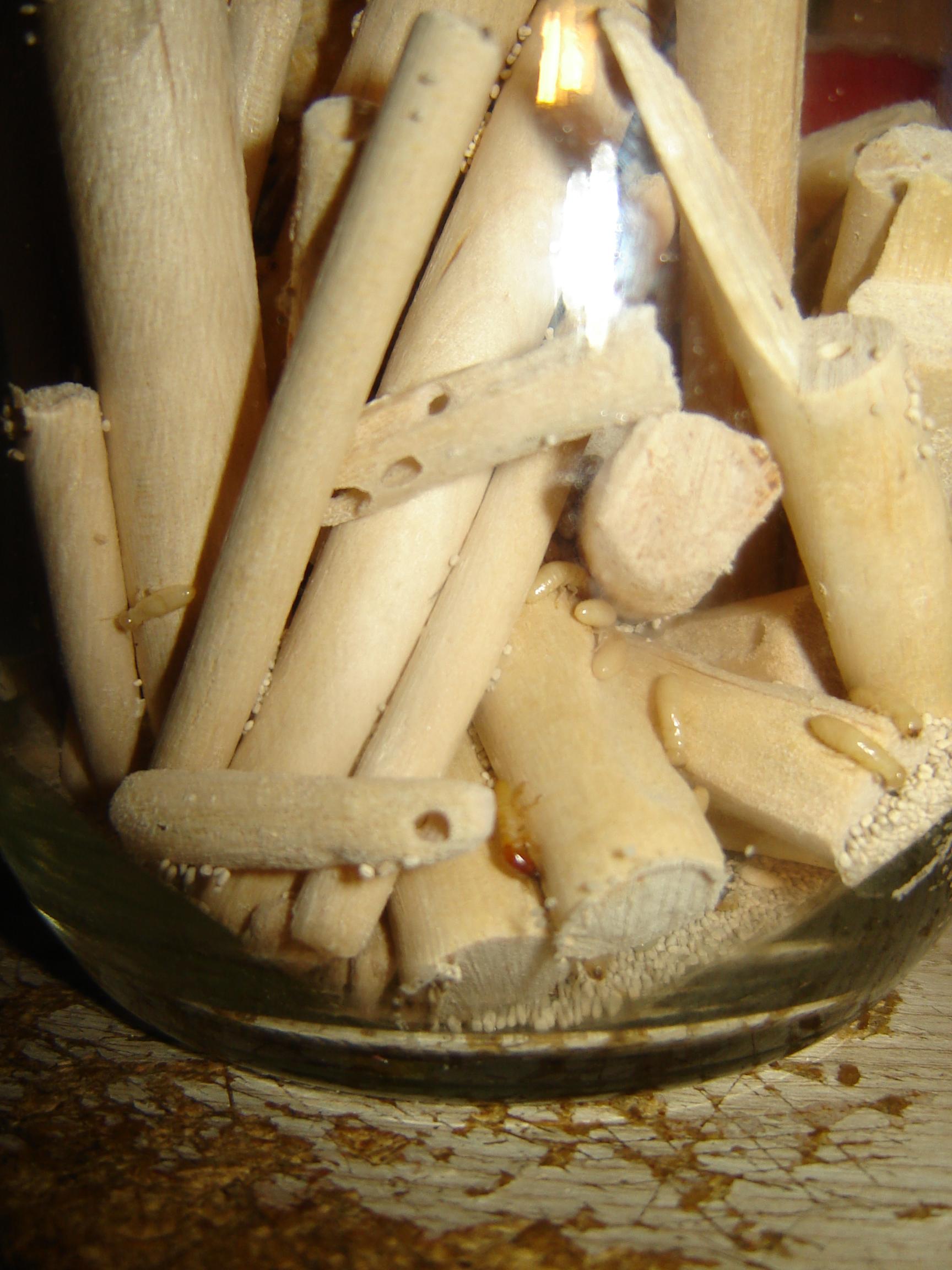 Though I like the idea of ant farm style nest and I have tried them in the past with failure. I found that every time I tried placing Drywood termite in ant farm style nest, they don't live past two years mark. I have been more successfully with the dowel home.setup.

no they can't climb glass surfaces

Drywood termite are from a arid dry environment. They live, feed and nest in wood which has a very low moisture content. So drywood termite have evolve the ability to extract water even from the driest wood. So I don't give them any water at all. But I did try a test in which I placed a few drop of water onto one of there dowel home to have 30 to 60 workers rush out of the dowel to drink the water I placed. This then lead me to my conclusion in another past test which I tested 6 Drywood termite colonies. In the test, three dowel homes were to be keep bone dry and the other 3 to be misted ever three days to keep them moist. The test colonies kept bone dry lived fine and the colonies which I periodically misted all failed. So I believe the few drops of water was not because they need the water but this actually a defense mechanism or a automatic reaction from the colony to drink up the water before fungus or disease-causing organisms associated with moist environment could take hold and hurt or kill the colony.

Well it depends of which termite species you have, since drywood termite are from an arid to dry environment and also depends on factors such as location, food availability and environmental conditions, entire colony may take five years or more to mature. Eventually the colony stabilizes and reaches maximum egg production. At that point the colony will contain between 2000 - 3000 individuals with eggs, immatures, soldiers and workers. I remember reading that queen can live up to 40 years old and ndividuals member have a life of 4 to 5 years and I think this has to do If the queen dies, worker will start to develop functional reproductive organs to take her place and take over her duties.  But most drywood termite colonies remain small, but colonies with multiple queens and king contain up to 10,000 to 20,000 individuals.

hey everyone I just wanted to show my termite colony moving into a fourth dowel home I placed in to give them more room to grow. I have never been able to witness there move into dowel but today I was at the right time and manged catch them doing their move so I took picture and  would like a share with everyone. They currently occupy three dowel and make the fourth into a home 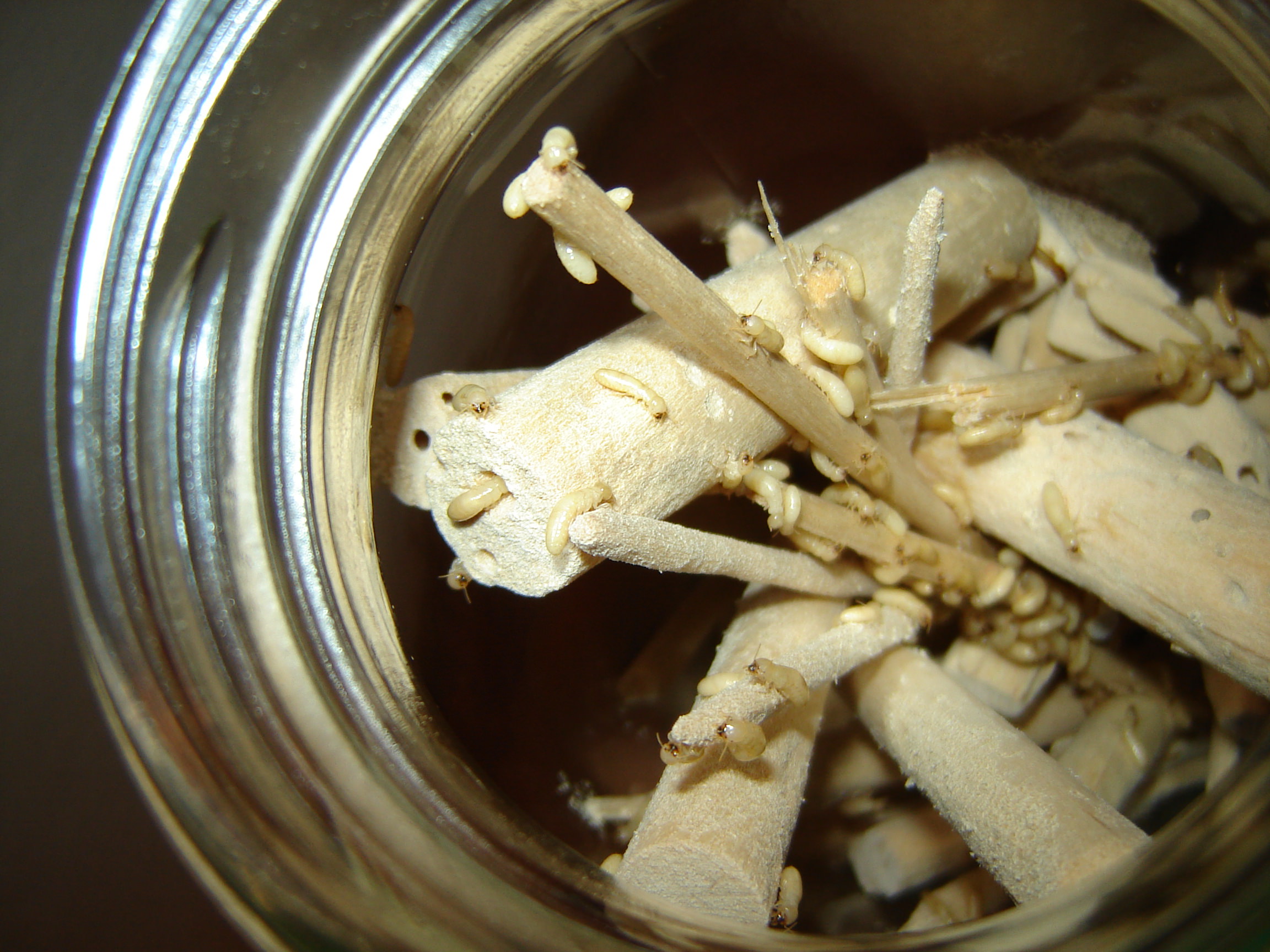 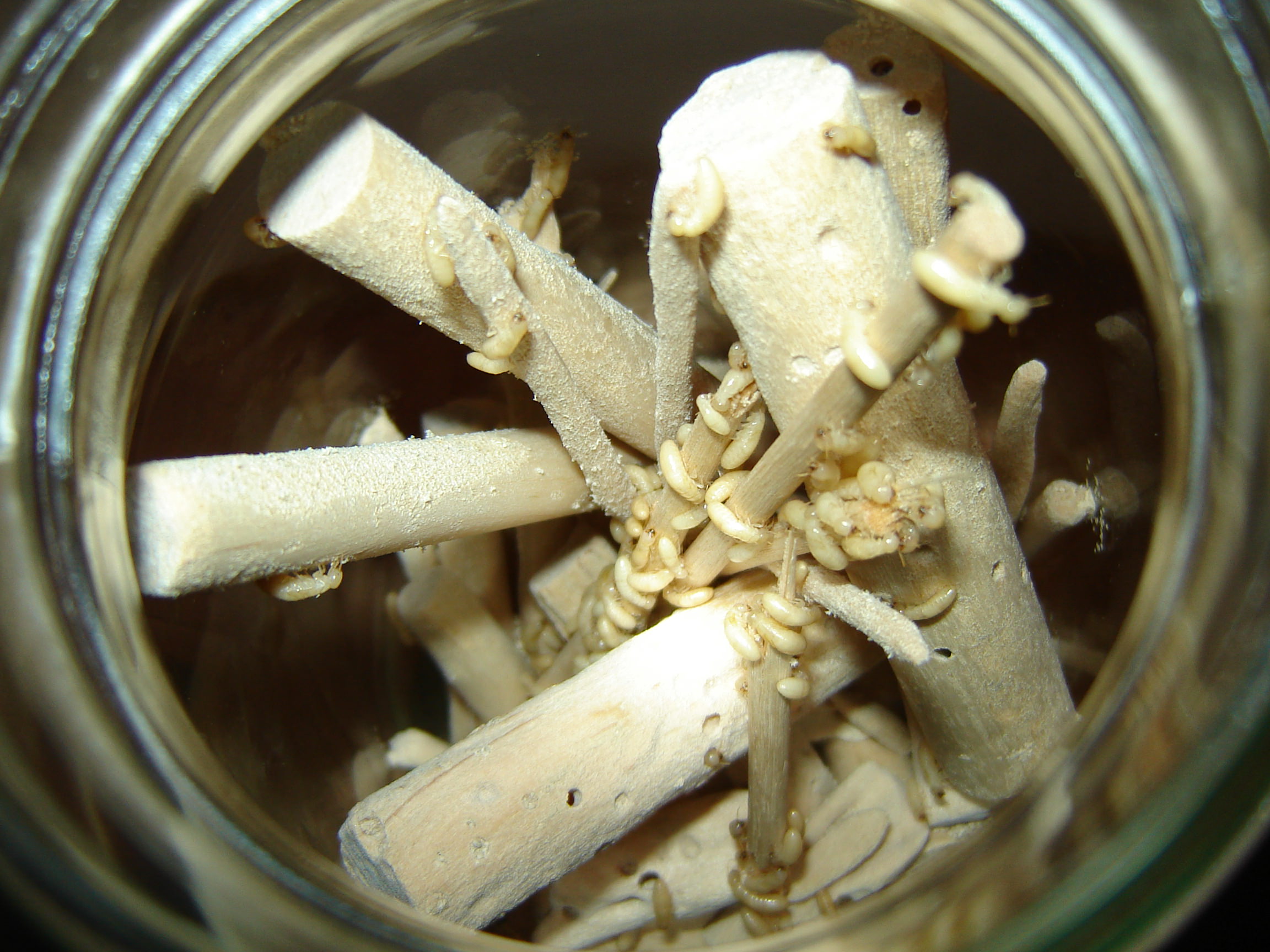 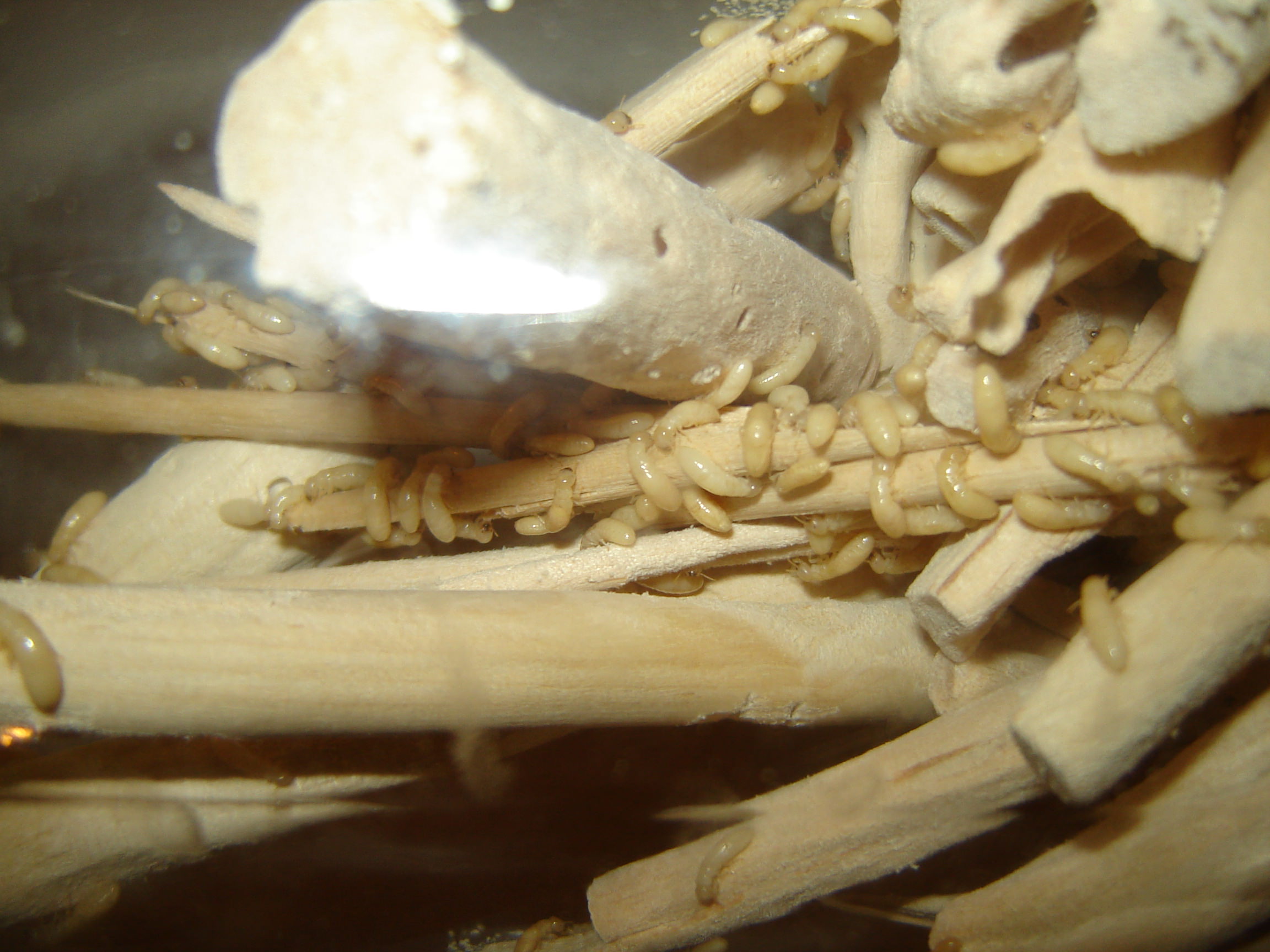 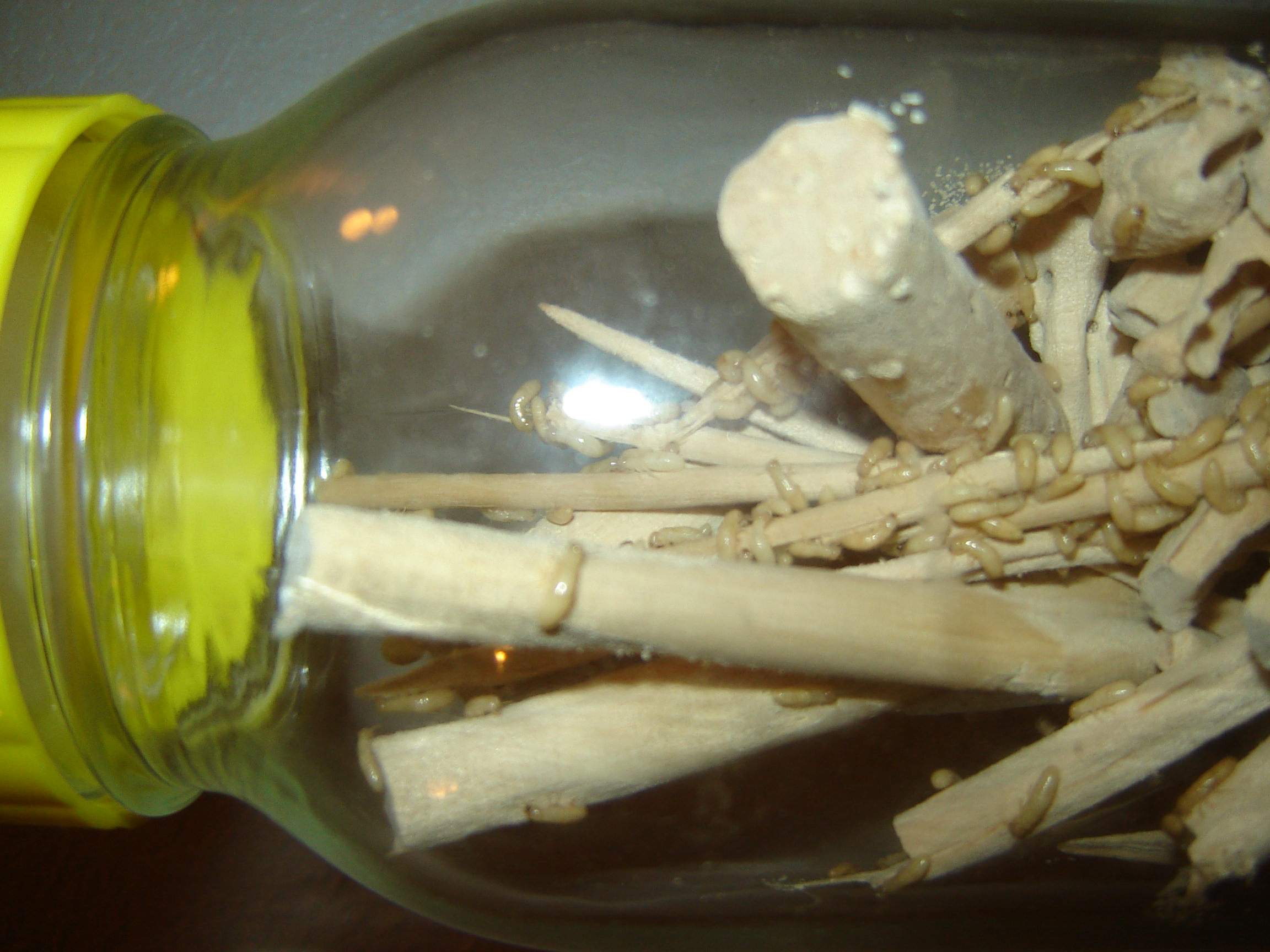 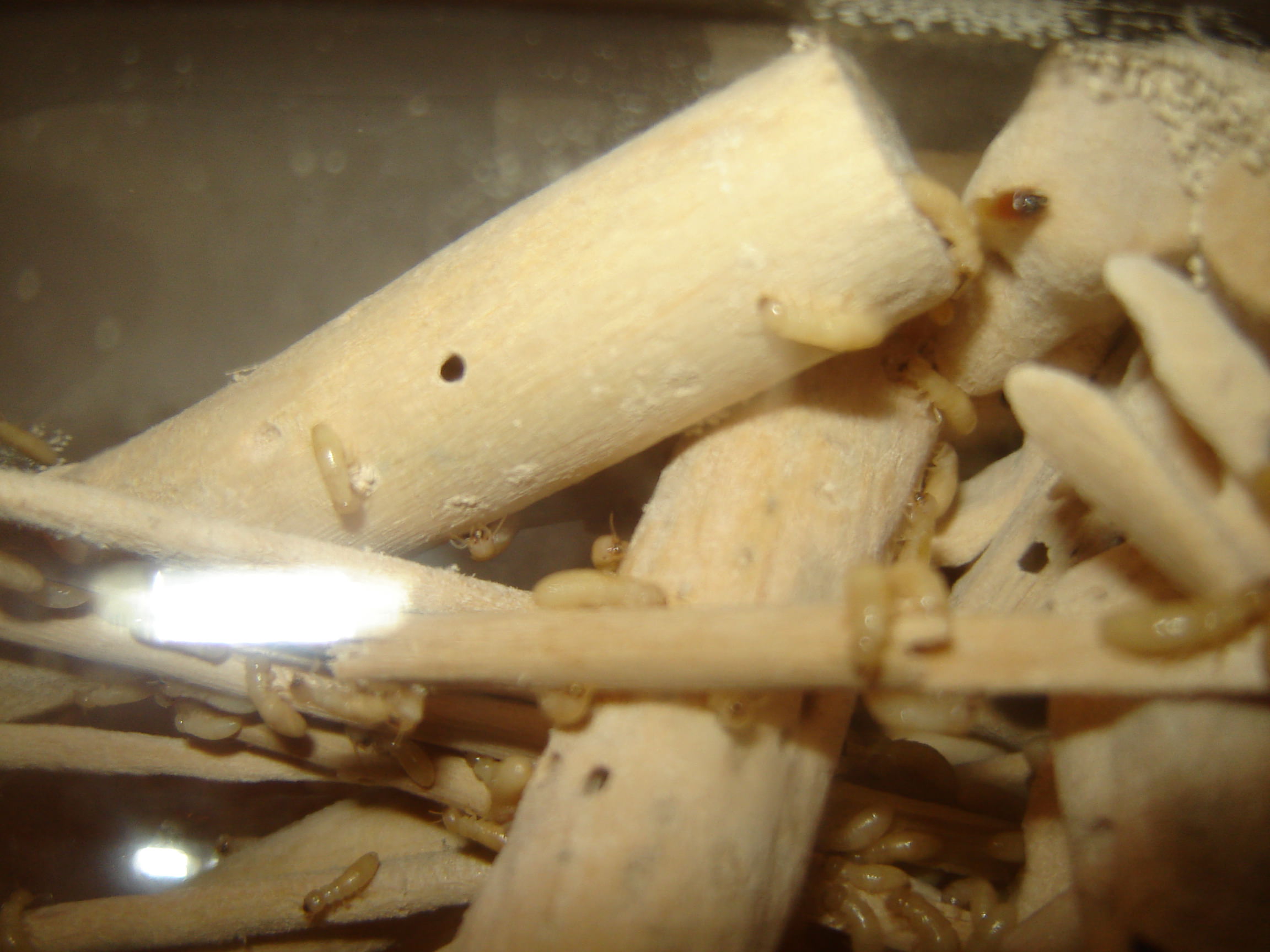 Hey everyone I finally managed to take two picture of the king being escorted by a few his royal bodyguards. I tried waiting for the queen to come out also but think I scared them all off with the flash on the camera, I will try not to do that again on their move into the fourth dowel home. As you see on the second picture the photo is blurry because the king is running off. lol

Also you see young white wing alates following behind him 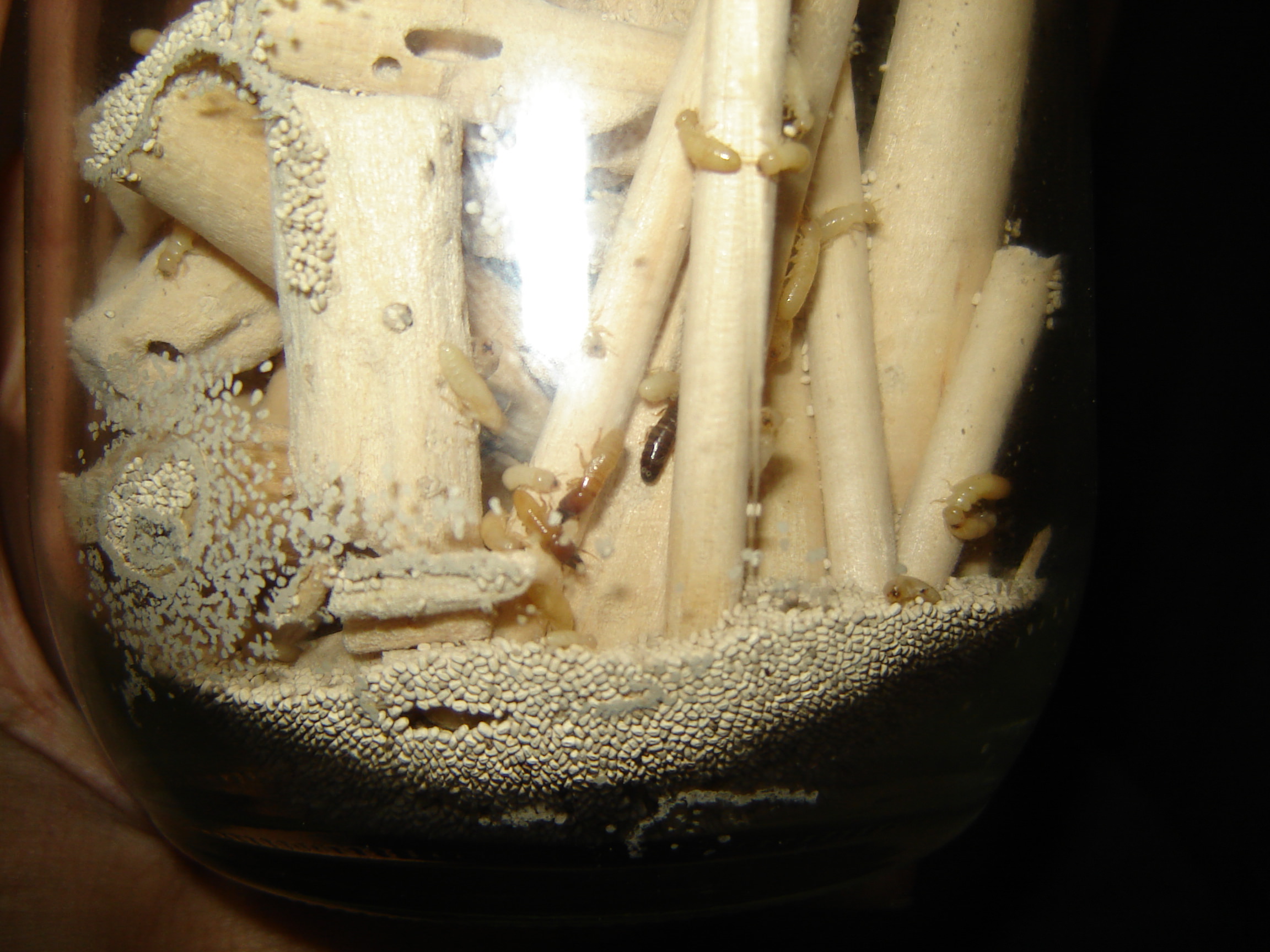 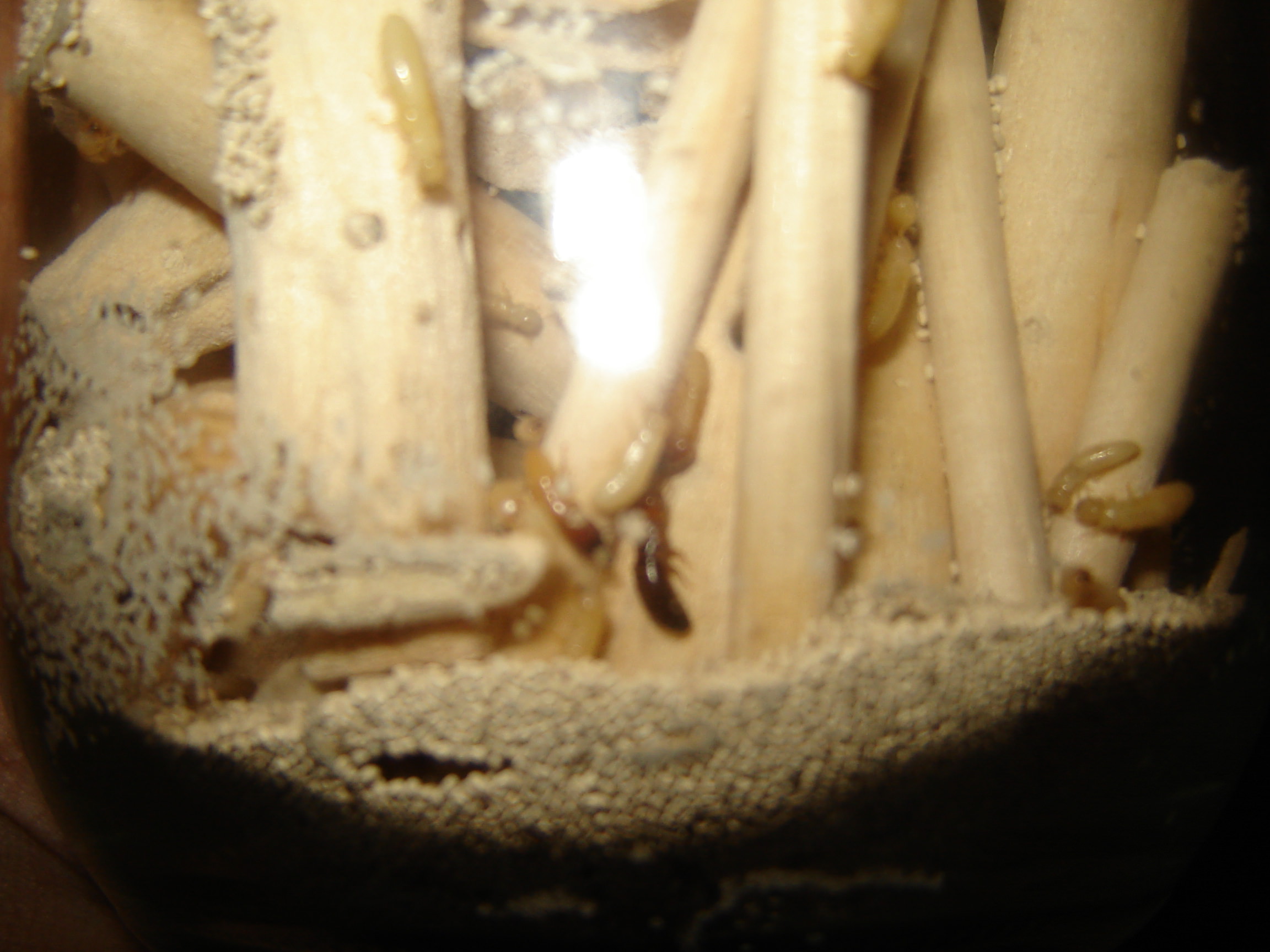 I got the queen on picture

. She is trying too back out from the hole so she can get out. I only took one picture and I'm happy with that because I don't want to stress them anymore then I have to on there move to the bigger dowel home. 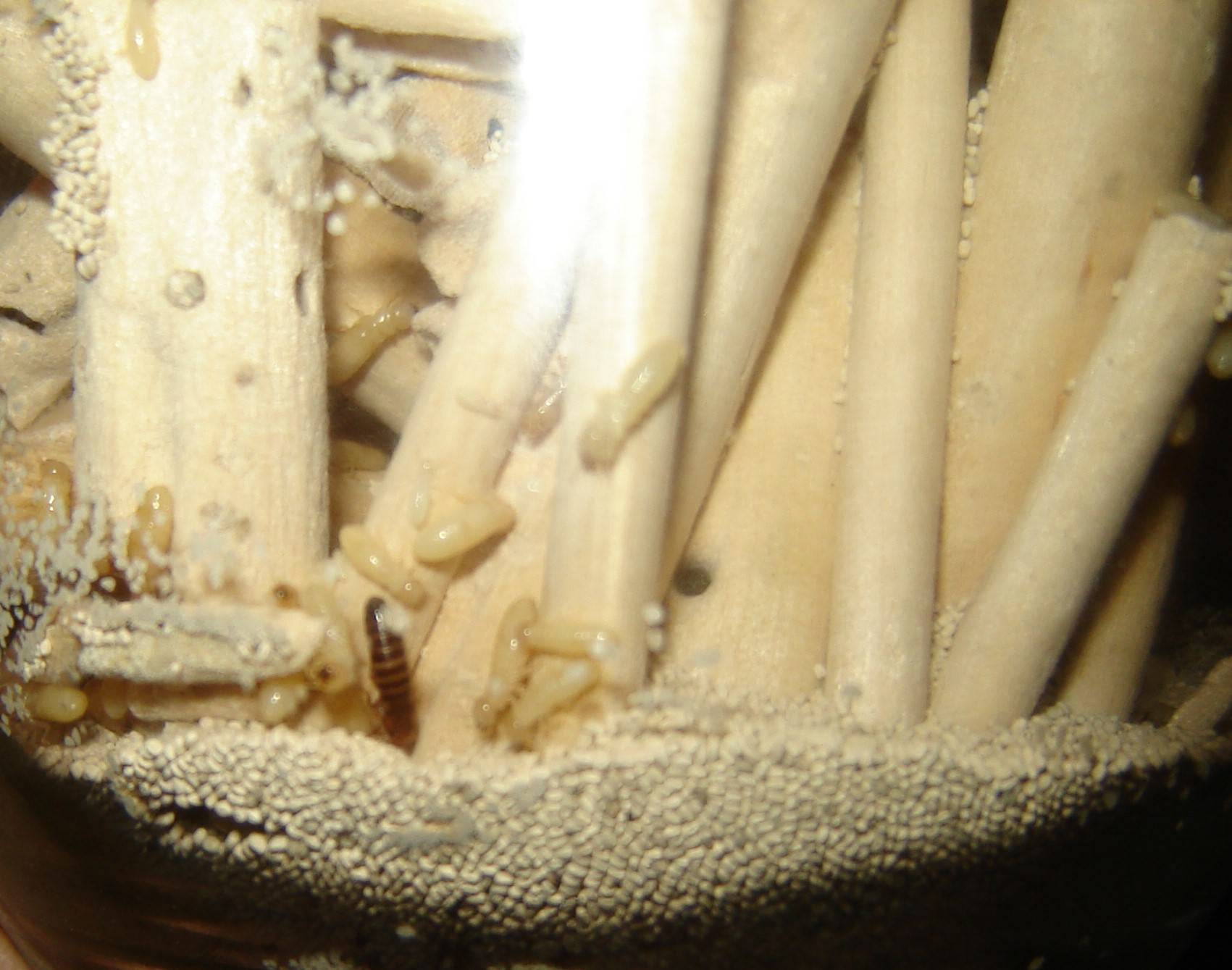 Definitely the best Drywood termite colony I've seen out of anyones. I pretty much copied this design with my alates I got, so hopefully they survive. Haven't had much luck past few years, but I think the setup is a lot better.

Going to try Dampwood termites too. Only two places I know of sell them though. Termitat and that is way too much money. And that one site I forgot name of, but its 33 dollars for 30. Still kind of a lot, but still cheaper than Termitat. I don't live anywhere near Dampwood termites sadly, and never seen any in the local mountains.

Thanks Vendayn, I'm glade you like my dowel wood setup and I'll give you some tips on the care for dowel setup. On the picture 1 you can see my second dry wood colony, it is about close to three years old now.  The keys points to understand this is setup keep a eye out for the frass or wood waste in the bottom left next to the dowel colony. The dowel home function as a place for them only to live, eat, keep young, and eggs.  It doesn't give the colony any room to make frass chambers so the limited room forces them to throw the frass outside of the dowel. This is key to keeping them and knowing if they are alive in there nest for the early two hard years getting them establish and not being able to see the queen, king or workers. The more frass being thrown will tell you the colony is alive and growing. But no frass might mean they are dead or they are slow  at being established and might have made a small frass chamber but will eventually have to change that room to more living space. So have a lot patients Vendayn for your colony. 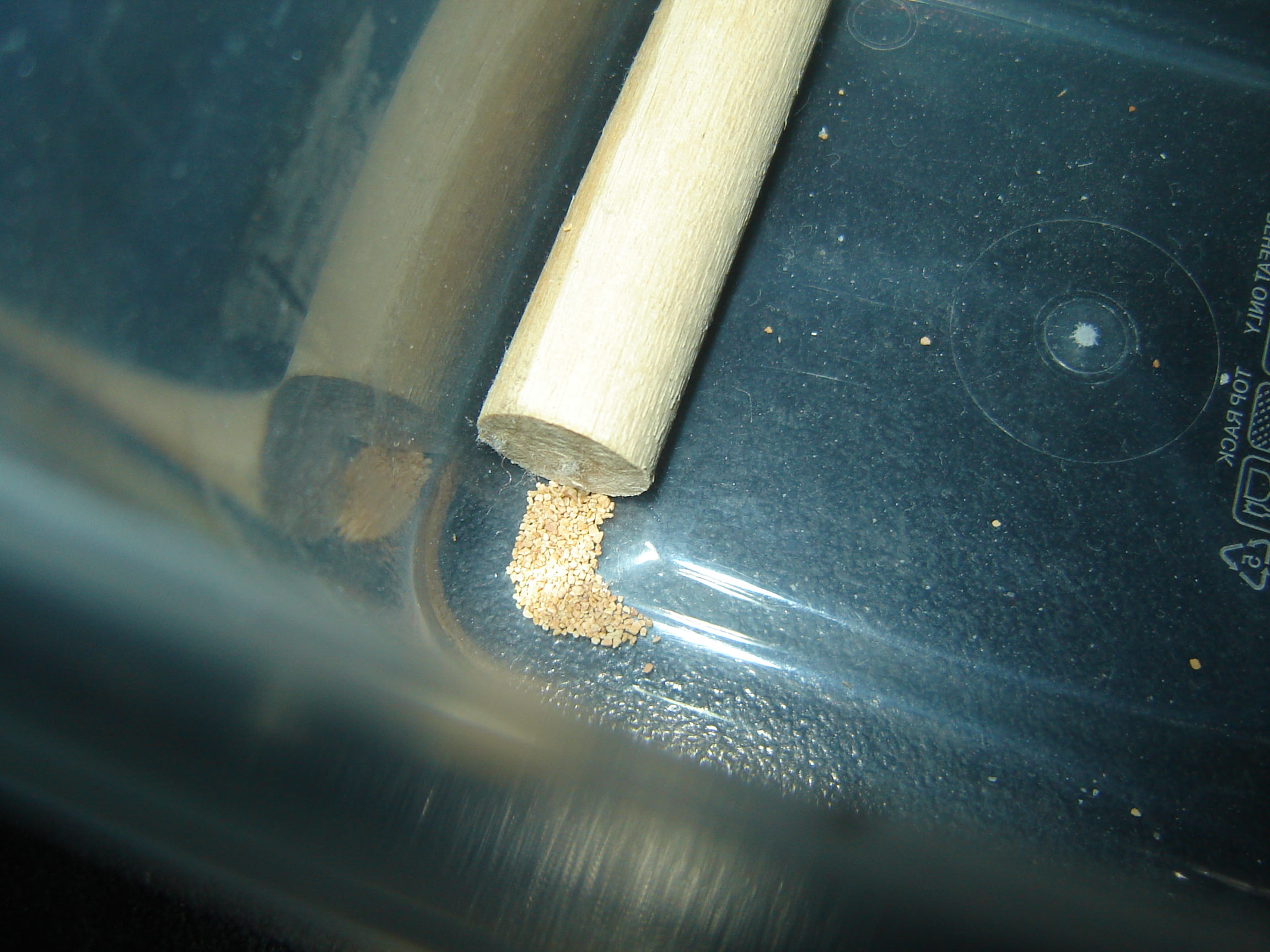 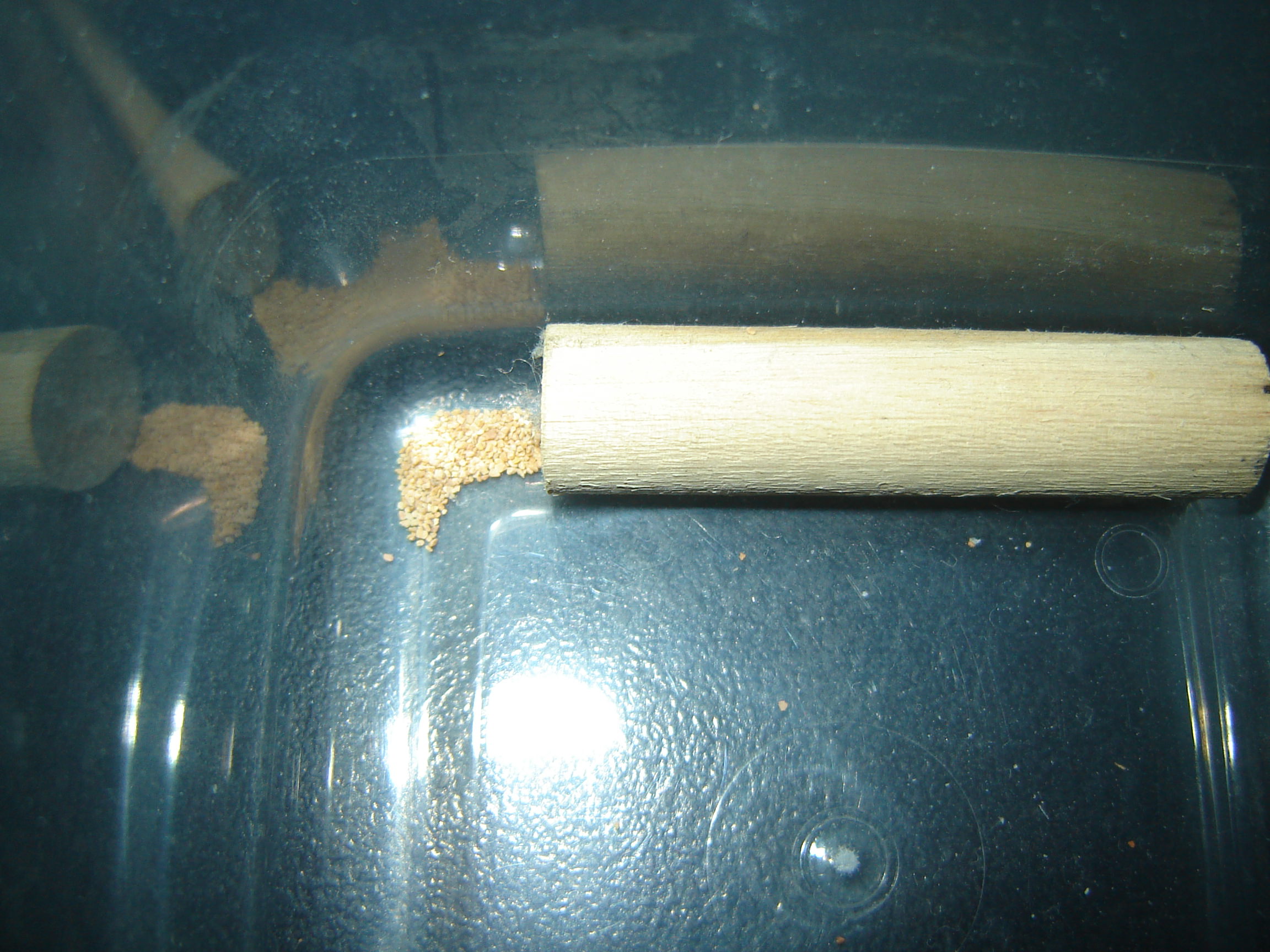 On the third picture is a old use up dowel home and you can see that there is only the two chambers for worker, soldier and the bottom keep young, eggs, king and queen.

Thanks for all the information

Do you have any opinions on starting them in a (large) test tube, but otherwise the same setup? Dry test tubes with dowel for them to live in. There shouldn't be any difference, right?

I put some in a jar, since I read they can combine together or/and have multiple queens. That and I only have one jar I can actually use that is made of glass. I'll see how that goes. But, wanted to keep single pairings in test tubes and I have lots of test tubes. No water or anything, just the dowel with the pairs.

I have never use test tube before so I can't tell you if it would work or not. As I only been using baby food jars, food jars and mason jars to house them. But it can't hurt to try if you have extra pairs of king and queen to try it on.

What do you use for a lid on the jars?