112 replies to this topic

In mid-July to late August, I go out to their area after a summer storm to collect males. If I'm lucky enough to get out there the day after a decent shower, both males and females leave the nest between 6:30AM-7:30AM. The males leave first and the females follow 10-15 minutes later. I've not found a lek, because the terrain is very challenging. If I find dealate females, I also bring a few back. I collect only what I need for that year's project and nothing more.

The day after I return with the males, I water the parent colony and the female alates arise the next morning. I collect them and put them with the males in a separate tank with soil heated from above by a incandescent lamp. They all gather under the lamp to get their body temperature up to optimum. Then they all begin to run around in a frenzy. The males latch-onto the females who struggle, ensuring only the strongest males will be successful. The first mating takes place and is completed within a couple of minutes. The females try to depart, but can only go so far before another male grabs onto them and mates as well. I may leave them in the tank for the entire day, ensuring they are fertilized many times which should sustain fertility for a lifetime. I suspect the females depart the lek after the first or second mating in the wild, as their hillside gets extremely hot very quickly in the morning and they need to find shelter to survive.

So, the only triggers are water for the parent colony the day before and an overhead lamp. If I turn-off the lamp, the mating frenzy ceases after 10-15 minutes as their body temperature drops sufficiently. The whole affair is a matter of timing and replicating the conditions they experience in the wild.

Good news -- The queen looks like she's fertile after all. She now has three little larvae of her own, as well as the two P. rugosus pupae that I boosted her with when I thought she wasn't fertile. She seems to be taking good care of all of them. 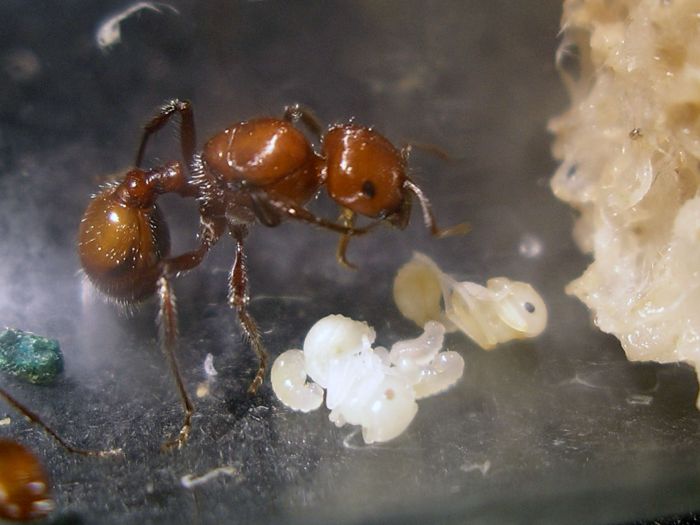 This colony is still alive and well. The three larvae are slowly growing, and I can see they're definitely being fed the ByFormica Formula 100 food I've given them. One of the P. rugosus pupae finally eclosed and everybody's getting along great. yesterday I moved the colony into a foraging container with a layer of sand in the bottom.

@Retroman Can you post journals on your colonies? I imagine they are pretty big and successful.

Yeah, I saw his homemade "ant farms" and they're pretty cool. It would be awesome to see pictures of them here.

I want to see pictures...

me too, what kind of ants does he keep.

Remember Dragon Warrior, anything is possible when you have inner peace. - Master Shifu

You should ask him over on his thread (http://forum.formicu...-and-technique/).

me too, what kind of ants does he keep.

This colony is still doing great. I know for sure the queen is fertile now, because the first of her three larvae just turned into a worker pupa yesterday. On top of that, she has laid another 25 or so eggs, one of which I can see is already turning into a lara. One thing I noticed is how well the two P. rugosus workers take care of the brood. They almost never leave them, constantly feeding and cleaning them. The three P. tenuispina workers are almost always out foraging around in their container.

Since this colony was so willing to accepted the P. rugosus workers, I just thought I would see if they would accept P. subnitidus worker too. Until now, I have never been able to get any P. rugosus colony to do anything but eat or destroy P. subnitidus brood. I dropped a pupa in there that was just starting to eclose, and they all seemed to accept it just fine. It wasn't more than a day before it eclosed, and they were all working together showing no signs of aggression at all. Since this colony seems to have absolutely no problem accepting other species, I went ahead and tried P. californicus (bicolor) as well. This is another species I have never been able to mix with any other species yet. Well, sure enough, the P. californicus worker eclosed today, and it too isn't having any trouble with the colony at all. Right now I have four different species of Pogonomyrmex all living together happily! 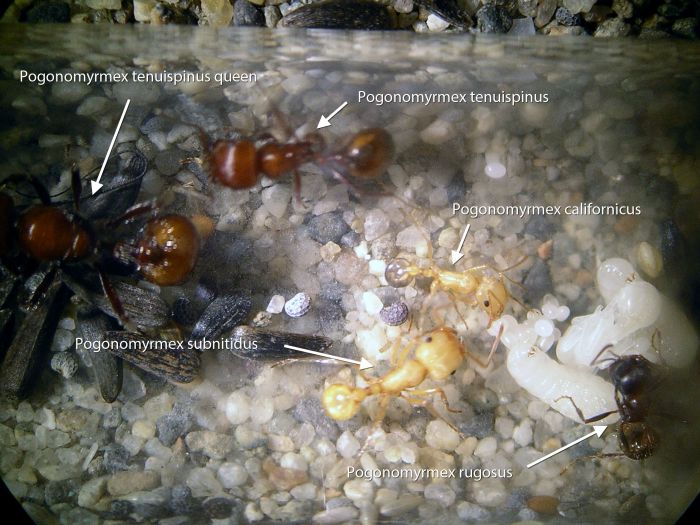 Another thing I saw the other day, was one of the P. tenuispinus workers laying a trophic egg. It was biting and biting like crazy at the tip of its gaster, and then I saw a little egg starting to pop out. She kept trying and trying to grab it, but it didn't look like it was coming all the way out. Eventually, It looked like it, or part of it was just hanging there damaged.

That's crazy. All you ever hear about is the horror stories of mixing species. I've never heard of different species coexisting, let alone 4 different ones, albeit the same genus.

The good man is the friend of all living things. - Gandhi

Quite interesting, like DesertAntz said, never really seen 4 species together like that, let alone out of different subgenera. Try giving them a Veromessor pergandei pupa!

I actually wanted to try that next.

Obviously this is my only P. tenuispinus colony I will have until next year, so I don't know how much experimenting I want to do on it, even though I don't see much risk to anything but the brood being given to them. I just have never had a Pogonomyrmex colony that's this accepting of other species, so it sure is tempting try.

I am sure if the Veromessor pergandei worker becomes a problem for the colony, it would happen when it is still a callow worker. The crushing force of a Pogonomyrmex worker would quickly dispatch a callow worker of any kind. I want to see you try that sooo bad!

Over the past month, two of the three P. tenuispinus workers have died. I have no idea how old they were, so I was not alarmed by this.

Yesterday the queen's first biological worker eclosed! These things are definitely way bigger than any other Pogonomyrmex species around here--probably even bigger than P. rugosus. This nanitic that just eclosed is larger than the P. rugosus nanitics, and larger than the mature P. subnitidus worker living with them as well. To this day, every one of these workers are getting along perfectly despite being of four different species. There's a decent sized clump of eggs, and one of them has already turned into a larva, and has already grown significantly.

Here you can see the callow P. tenuispinus worker on the top left, with the P. rugosus, and P. californicus nanitics to the right of her. The mature P. subnitidus worker is on the bottom right. By now this colony has three biological workers. All three of the queen's sisters have died. All the workers from the four different species still seem to be getting along great. One more egg turned into a larva and was just about to eclose, when they all decided to eat it. Now they just have the little pile of eggs that they've had for quite a while.

Everybody in this colony is still alive and all four species are still all getting along great. Two of these eggs they have had for a long time have finally developed into larvae. Let's hope they don't eat them this time.

The two larvae are growing larger, and the queen has finally laid two more eggs.

Aaaaand they ate both of the larvae again. She has laid a bunch more eggs and they're now turning to larvae, so again, we'll see what happens to these.

Just like my P.rugosus... Are they all still coexisting?

Also tagged with one or more of these keywords: pogonomyrmex tenuispinus, journal, dspdrew