56 replies to this topic

Alabama anter, termites are really hard to raise from scratch. Also, Crazylegs you're right it is chrysogaster. piliventris don't have the red

Alabama anter, termites are really hard to raise from scratch. Also, Crazylegs you're right it is chrysogaster. piliventris don't have the red

Mmhmm I know but worth a try right?

I can turn over just about any stick in the yard to collect some termites.

Or just leave the outside light on in the eve to collect something different, like a lacewing or a wood roach.

Nature is my ant fridge.

After realizing that food is presented to her on a regular basis, she has really settled in and got to work laying some more eggs. 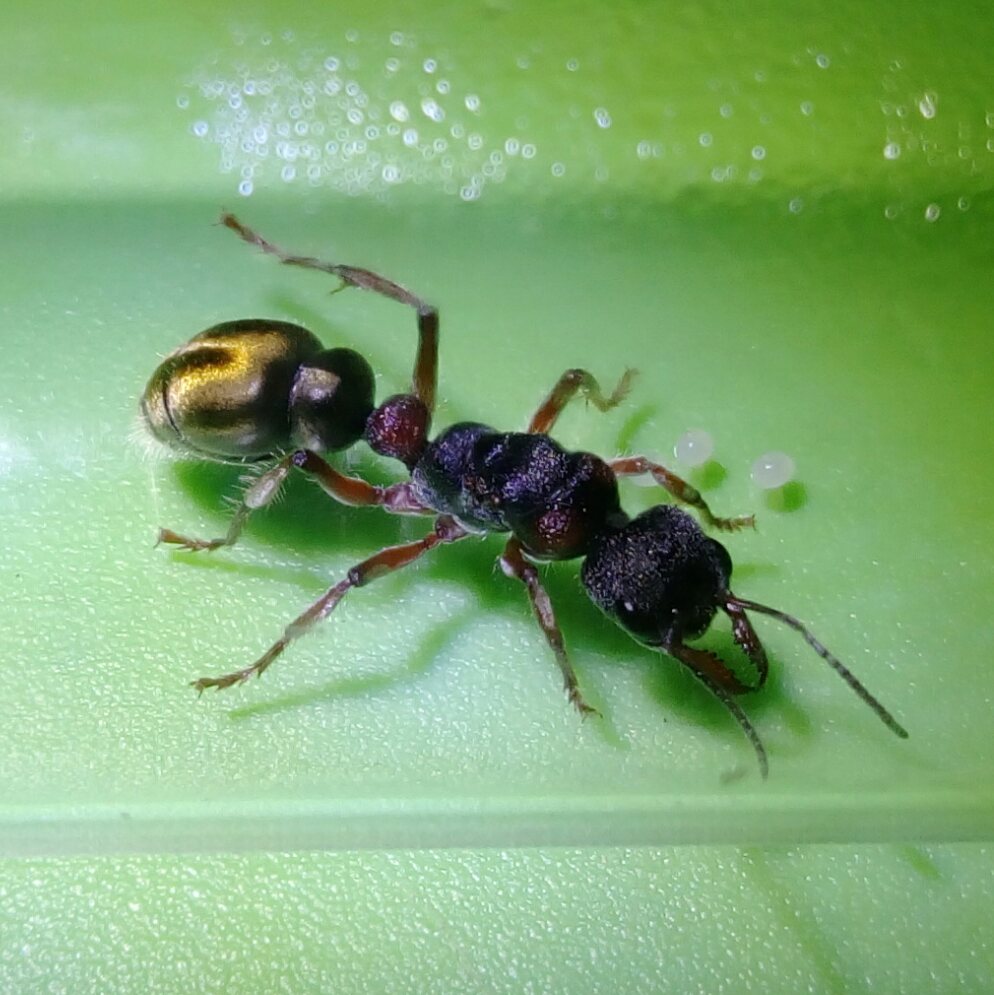 Thanks Alabama Anter. She's gonna be tough to raise, she gets so easily disturbed.

She attempts to sting anything that comes into the tube, even a pin with a drop of maple syrup was attacked before being hurriedly consumed.

I open the cork just a crack and she drop kicks her egg and comes running.

I thought it may have been a fulvipes at first but they have long slender black mandibles with the teeth concentrated at the tip.

This girl has brown mandibles with the teeth more spread along the shaft.

I think piliventris have black legs and the same longer black mandibles.

I may be wrong but I did look at those two species before concluding she was a chrysogaster.

Why are there so many similar.

Queen: daughter, stay back. I've felt a tiny but dangerous gust of air.

Seriously, though. I'm so jelly. Myrmecia has always been high on my want list. Also, maybe you should try getting a founding formicarium (like THA Atom or Hearth) to make feeding easier.

My semi-claustral tetramorium is the complete opposite of your myrmecia. When I pull out the cotton, she freaks and dives into the nearest crevice. Then she realizes that she left her eggs and goes back for them. But when she gets to her eggs, she forgets why she ran and just sits back on top of her clutch.

I have a plan for when her first nanitics arrive.

I sure hope she makes it.

I'm goin to go to Australia in the summer holidays

Better be quick, it's the middle of summer now. And it's been a scorcher.

Put a lacewing in there for her last night.

Despite it being already dead, she freaked out over it. I figured she would settle down and eat it later on.

Woke up this morning and she has eaten three of her four eggs.

The lacewing has been pushed up under the cork and looks uneaten.

Might have to leave this girl be for a bit to settle some more.

You should set the test tube up in an outworld and leave the entrance open. Put like sand in it and partially bury the tube. Then, open up the test tube and put her food in there; that way feeding is more natural.

I'm currently building a formicarium for this ant with a built in founding area.

Just don't want to rush it.

I've named this girl "Ereshkigal" ( Ruler of the Underworld )

Under advice from some of you guys I've modified her tube to go into a small outworld. 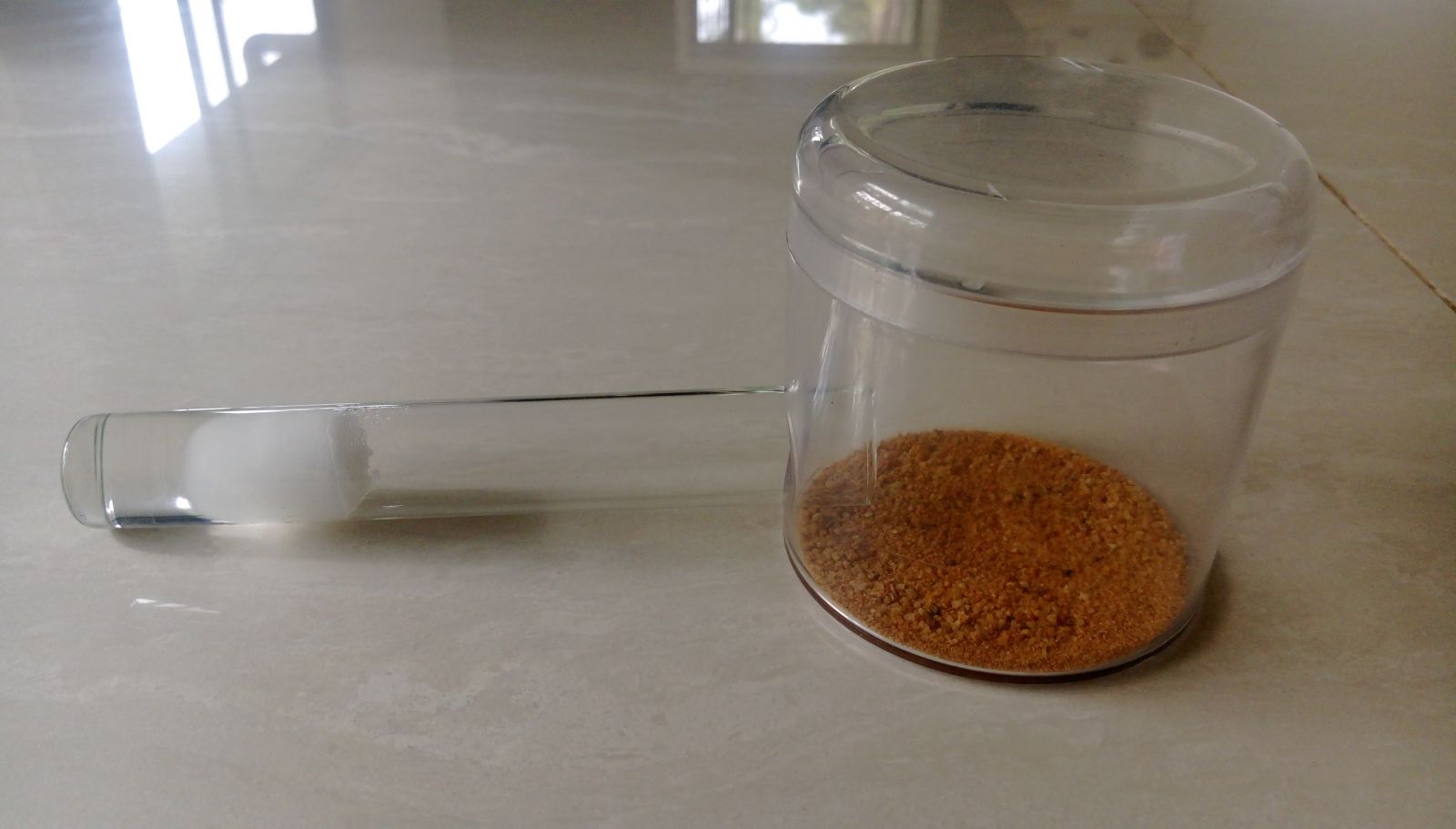 She immediately began taking small rocks from the outworld into her tube.
I think the container had chocolates in it or something, I can't remember but I probably ate them in one mouthful if it did.

I've narrowed down her favorite food to small spiders which I can now simply pop into the outworld for her to find naturally.
I'm trying to keep photos to a minimum for the moment, but I can tell you she is back up to three eggs. I pushed a small piece of clay up under the tube to make a little ramp.

I'm sure that this queen will get a worker.

I've noticed that with my semi-claustral queens infertile ones don't make a good egg clutch and they just scatter them. Also, you need LOTS of protein (I feed my tetramorium and technomyrmex queens an amount of protein equivalent to the body size. I also provide some honey water, but not too much because mine tend to fall in the dish.

Also, some highly predatory semi-claustral ants (pseudomyrmex, for me) just place their eggs in a scattered pile but situated close to their favorite nesting place. The unfertilized ones just have their eggs scattered all over the place (even in the outworld!)

Make a video of her killing a live termite.

I once had a beautiful Myrmecia nigrocincta queen with several larvae.

It was a month in and all was well when I thought to myself how cool it would be to see her take down a live offering.

I caught a termite worker as I didn't want her to have to take on anything with large mandibles, or the ones that have what looks like a cannon on their forehead that fires formic acid.

The scene was set and the queen could smell the termite flesh in the air and started to venture out of her lair.

She approached the termite and to my horror the termite worker sprayed some sort of invisible goo in the face of my queen.

I didn't know a termite worker could do that at the time.

She was clearly affected by it but pressed the assault and made the kill.

I was relieved to see she survived. The termite was even taken back to the larvae and she began to clean herself.

I thought she was fine but found her dead a few days later.

I don't know if the termite killed her but I won't make that mistake again.

Hunting and taking down live prey is for the workers.

I wouldn't feed termites to them if I were you. Termites are actually quite strong and you can keep termite queens/kings as fun pets. You could feed grasshopper nymphs, pinhead crickets, waxworms, nonpoisonous caterpillars, etc instead. Termites also aren't very reliable as a food source due to nuptial flights being relatively some time apart.

What would a Myrmecia queen hunt naturally in the wild during her founding period?

While there may be altercations between a founding queen and other live insects and animals in the wild, the result isn't always in favor of the queen.