65 replies to this topic

They started laying eggs about four or five days later, and now all have a pile of at least 10 or so eggs. I gave one of these to Bigb, so I now have 12. 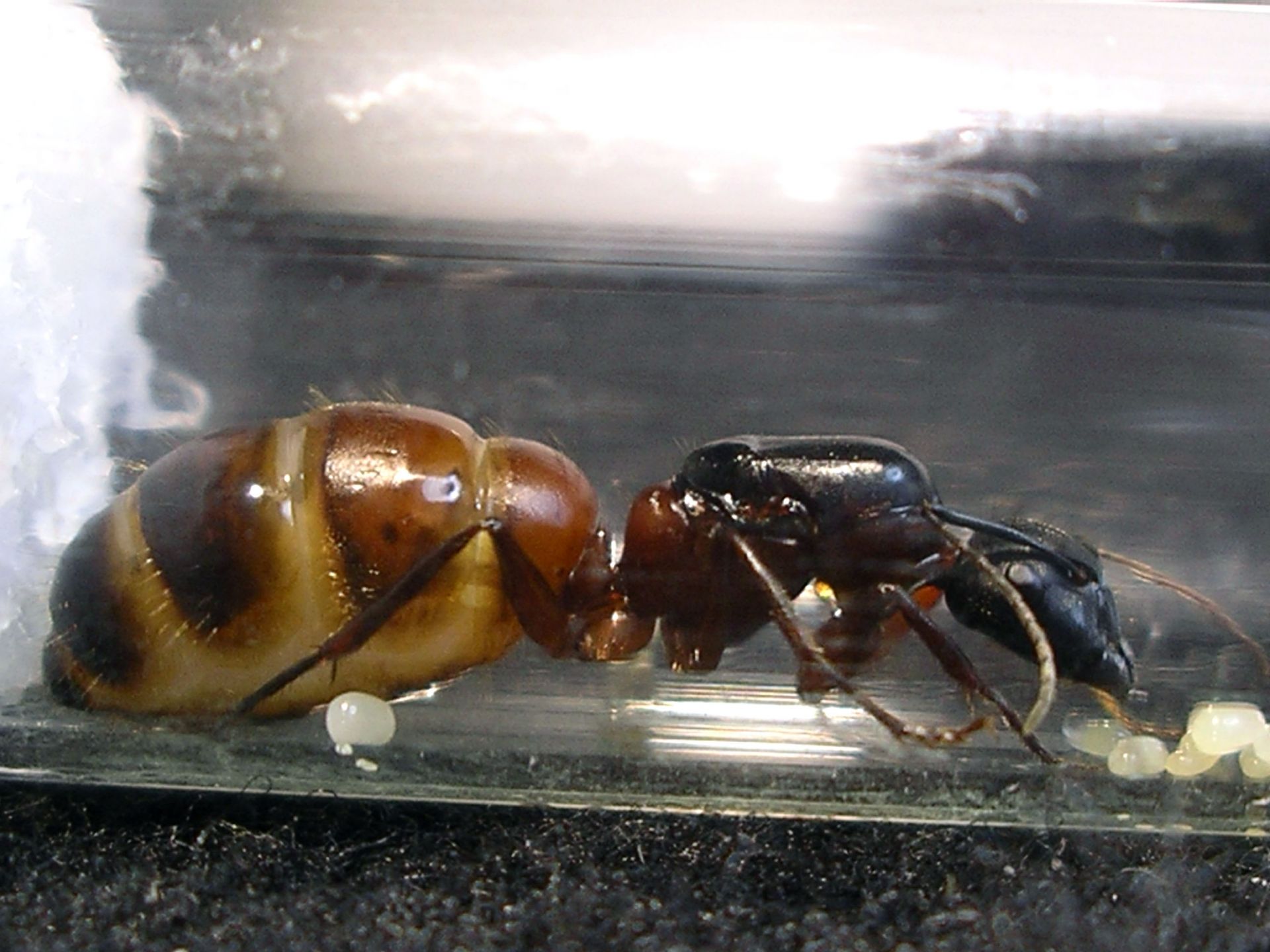 It has been about two weeks now since they started laying eggs, and it now looks like a few of them are starting to turn into larvae.

All of these queens have brood now, and most actually already have pupae. I gave away a few more and now have nine. There is one queen that keeps eating her eggs though, as a matter of fact she didn't stop at the eggs, she even tried to eat the tin foil I put her food on top of. 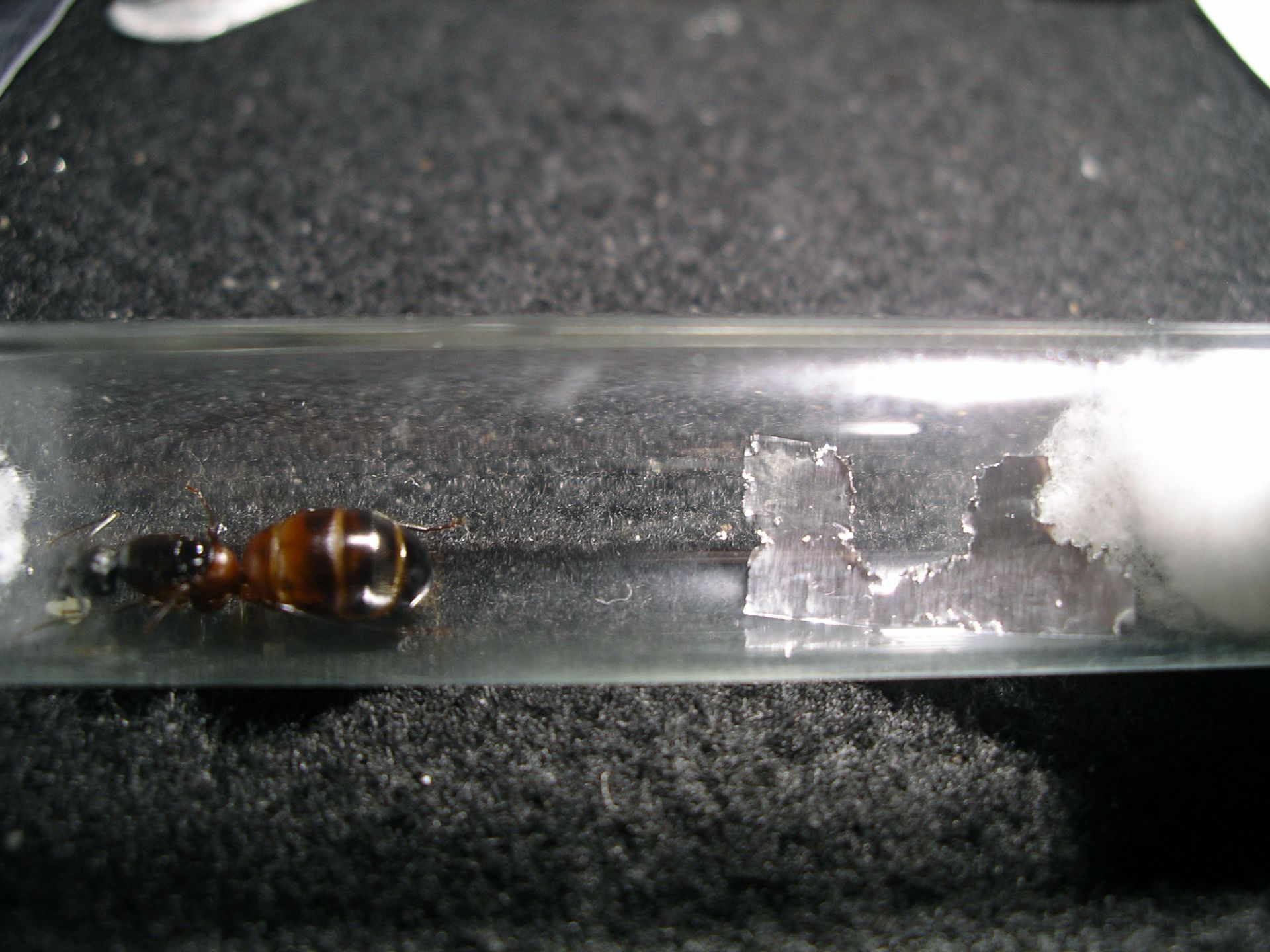 How do you find so many queens? Do you have any tips?

Well, I don't know where you're from, so I can't be too specific, but up to a week after it rains is a good time and/or during sudden warm-ups or heatwaves. Night time seems to be a good time too in my opinion. Also this goes for anyone, anywhere: You can't be lazy. Unless you happen to go out right in the middle of, or just after a mating flight, it's just a matter of probability. Queens are flying in very tiny numbers all through the Spring and Summer it seems, so if you spend enough time looking, you will eventually find one. I'm not really doing anything all that special, I just spend LOTS of time, and in my case, because of where I live (middle of the city), lots of gas. As for the last few times I went out, we happened to end up right in the middle of a mating flight. If for some insane reason, I wanted to, and had enough containers, I could have gone home with 500 queens.

Welcome to the forum BTW.

I live in Bakersfield CA. Don't get a whole lot of rain these days. Thanks for the reply, I'll keep looking and eventually I'll find something.

Thursday the 15th of May, I found another seven of these queens up in the San Bernardino Mountains, except these are all black in color. Two have died since. As for the first bunch I found, they all have about five or so pupae, along with even more larvae and eggs. It looks like they should be getting workers any day now.

I just got some camponotus and I was wondering if you only fed the the one that was eating her eggs.

Also what happened to that one?

I fed a couple of them one time, but there really is no need to feed them until they have workers. I haven't fed any of them since. The one that ate its eggs, I'm pretty sure is doing just fine, just a little behind the others now.

This morning the first worker of the bunch eclosed. As for the black ones, another one died, leaving me with four, all of which have eggs now.

Did the black one that died have eggs?

I don't think so, because I don't remember deciding which queen to give her eggs to.

After workers recently eclosed from my two Camponotus sp.3 colonies, and three Camponotus sp.4 colonies, I have decided they are both C. vicinus like I suspected from the start, and so I will be adding them to this journal.

The two Camponotus sp.3 queens were found Saturday May 3rd 2014, in a place called Little Thomas Mountain, located in the San Jacinto Mountains. I found them a few hours after dark, while the temperature was in the 50's.

Four days later they both started laying eggs, and about a month and one week later, they got their first workers. The three Camponotus sp.4 queens were found April 7th 2014, around 10:00 pm wandering around on a trail in O'Neill Regional Park, in Trabuco Canyon, California.

These started laying eggs about four days later, and about a month and two weeks later, they got their first workers. First of all, even though the four "all-black" queens don't quite have workers yet, I can already see that two of them are actually just a dark red and black variety.

In an attempt to figure out exactly what species the very pale colored Camponotus sp.2 of mine is, I have added one of their workers to each different color variety of C. vicinus I have (except for the all-black since they haven't gotten workers yet), and so far both colonies have been completely peaceful. I also added one of these workers to one of the Camponotus sp.2 colonies, and they're getting along great as well. All of the colonies are steadily growing. I sold one colony of the large common colored C. vicinus to someone through the AntCanada GAN project.

Both of the all-black colonies got their first workers right around July 4th. I went on a hike today, in the mountains south of Simi Valley and randomly there was a camponotus major. I am unsure, but i suspect it was this or C.semitestaceus, I'm not sure at all, it was only a glimpse because I was in a hurry and it was getting dark. I guess it was just a big deal for me because weirdly I have never seen a Camponotus in person...

Yeah, all I know for sure was that It was a Camponotus major.

Most all of the colonies have been sold, given away, or have died. About two weeks ago the last All-black C. vicinus colony died. As of now, I have two colonies. One colony seems to be fairly healthy, has 7 workers and some brood, and is living in a test tube inside of a foraging container. This colony's queen is so full of humming bird nectar she looks like she's about to explode. The other colony consisting of nothing more than a queen and one worker is being kept in a test tube only.

Maybe they need darker area, or even not even be in a glass test tube.

Also tagged with one or more of these keywords: dspdrew, journal, camponotus vicinus