If you may or may not know I'm kinda over obsessed with Myrmica so I put a lot of attention into them. Anyways there's this particular species of Myrmica that seem to exhibit polymorphism to some extent. I've heard that some Myrmica species are ever so slightly polymorphic but this species or colony (since I haven't confirmed any other species around here to be the same in my area) has workers rom 3.5 mm - 5 mm.  I don't request an ID since the chances of them being accurately identified is slim, but I'll put in the basics, The workers range from around 3.5mm - 5mm I caught a glimpse of their queen(s) and she seems to be around 6mm and apears to be all black compared to her workers who either have a red or orange(ish) thorax.The colony is also less swarmy then the other Myrmica around here. A few live specimens I collected. 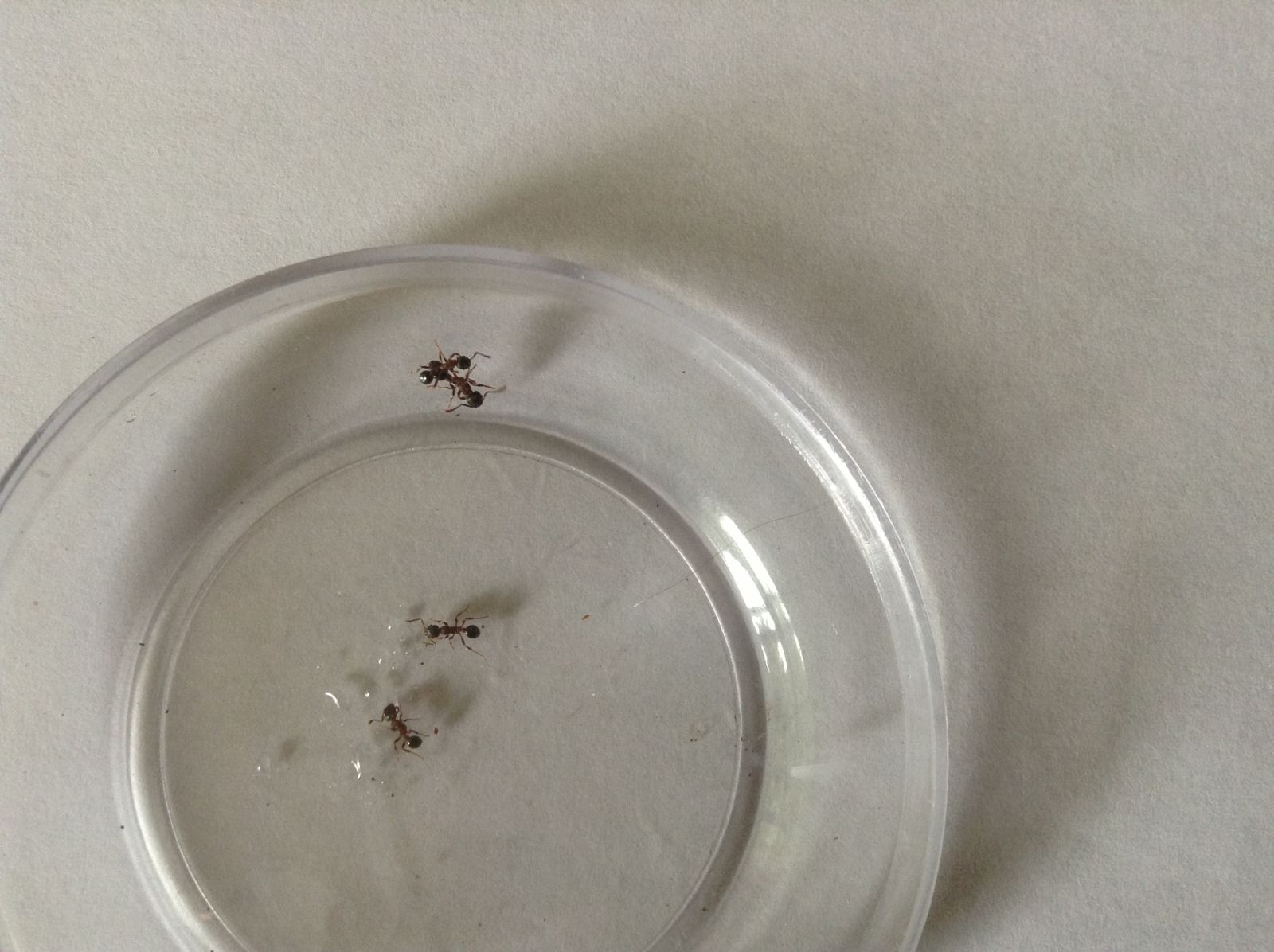 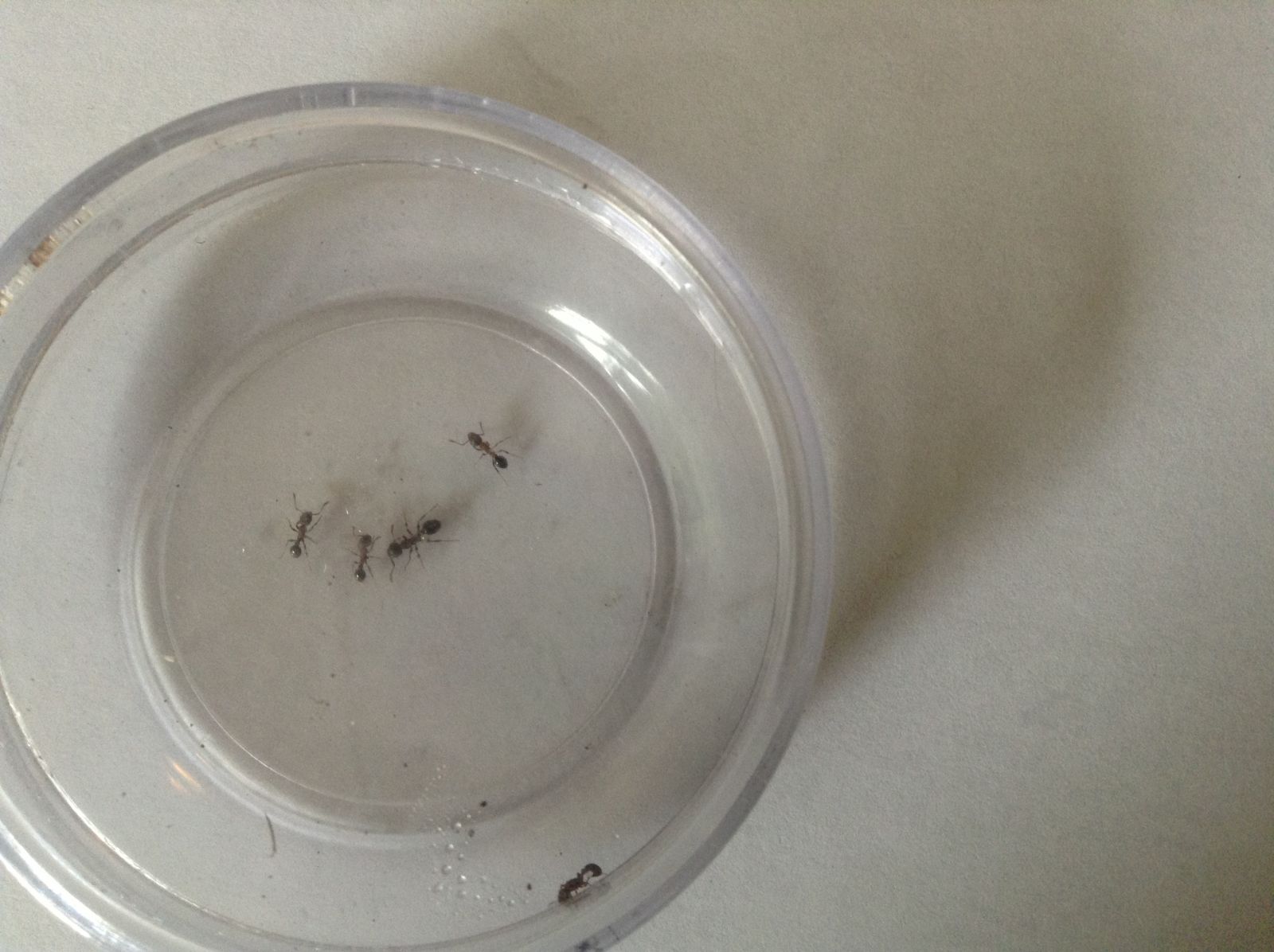 Here they're drinking honey right next to each other so it's easy to compare.

Myrmica can be different in size, in one colony from about 4 or 4.5mm to about 6mm for example (in my Myrmica rubra colony)

Other, not polymorphic ants are often from a different size, also Formica and even Temnothorax, but on bigger species, you can see it better.

if you find any mistakes, it's my autocorrection. it doesn't speak english.

I think a few of the workers larger workers might be queens. Only time I've seen 6mm Myrmica they are queens.Well what ever the case is this species/colony has a lot more clearer polymorphism than I've ever seen.

For me with the Myrmica I have around the queens are usually Solid Black and just have that queenly appearance. These just look like workers. They do seem to be the same looking ones that I find here.

You could easily identify a queen by its bigger mesosoma. Larger workers are only larger workers. In my small colony, founded last year, there are still smaller workers to find. I don't know why, the food support has always been the same.

Maybe the smaller ones have other functions f.e. caring for brood.

if you find any mistakes, it's my autocorrection. it doesn't speak english.

Large ones from the photo aren't queens for sure. Maybe that colony was founded (did I use the right word?) from a split polygyne colony? Plenty of local species do such things here in Poland, maybe yours do that too. Young queens come back to their home nest after a mating flight and then the colony cleaves into smaller ones (most of the times it's older queens who get kicked out, but they always travel with a few workers who are willing to serve them). Then such outcast colonies produce smaller workers because a colony with such few workers can't afford to produce big ones. Therefore we have a mix of large workers from the old nest and young, small workers born in the new colony.

Additionally if body proportions are the same even though the size changes, I think it's not polymorphism, I might be wrong though.

I have kept several Myrmica colonies before and still have one, and I see this in all of them regardless if they have one queen or multiple queens.  There are slight differences in worker size.

I also see this in Formica a lot.

Also tagged with one or more of these keywords: myrmica, polymorphism, workers, observations