I'm starting this thread to focus solely on my Formica colonies. Here's the original journal. At the moment, I have 5 colonies, each a different species. Identifying ants is not my strong suit, let alone Formica species. I'll list the colonies in order from largest to smallest in colony size. Colony B might not even be Formica, I'm still undecided. Hopefully as I get better pictures on this thread some people can step in and ID some of these species.

Colony A: Around 150 workers. Queen from my area in Utah Valley (spanish fork to provo).

Colony B: Around 50 workers. Colony from southern Utah Valley

Colony C: 30 workers, likely a subsericia group species. I found the queen in my area.

Colony D: 10 Workers. Queen from up north near Idaho

Colony E: 8 Workers. Colony from the same location as colony B

Queen was found in the 2020 season (sometime around late June). Due to toxic particles in their firebrick nest, most of the colony died off. I moved the remaining workers and queen out into one of my first home-made nests. When they came out hibernation, only four workers were left. I moved them into a THA mini hearth.

Around 30 workers now, tons of insects being eaten every day. They created a chamber of sand over their water tower, limiting sight.

Most of the larvae pupate No more brood, around 150 workers. 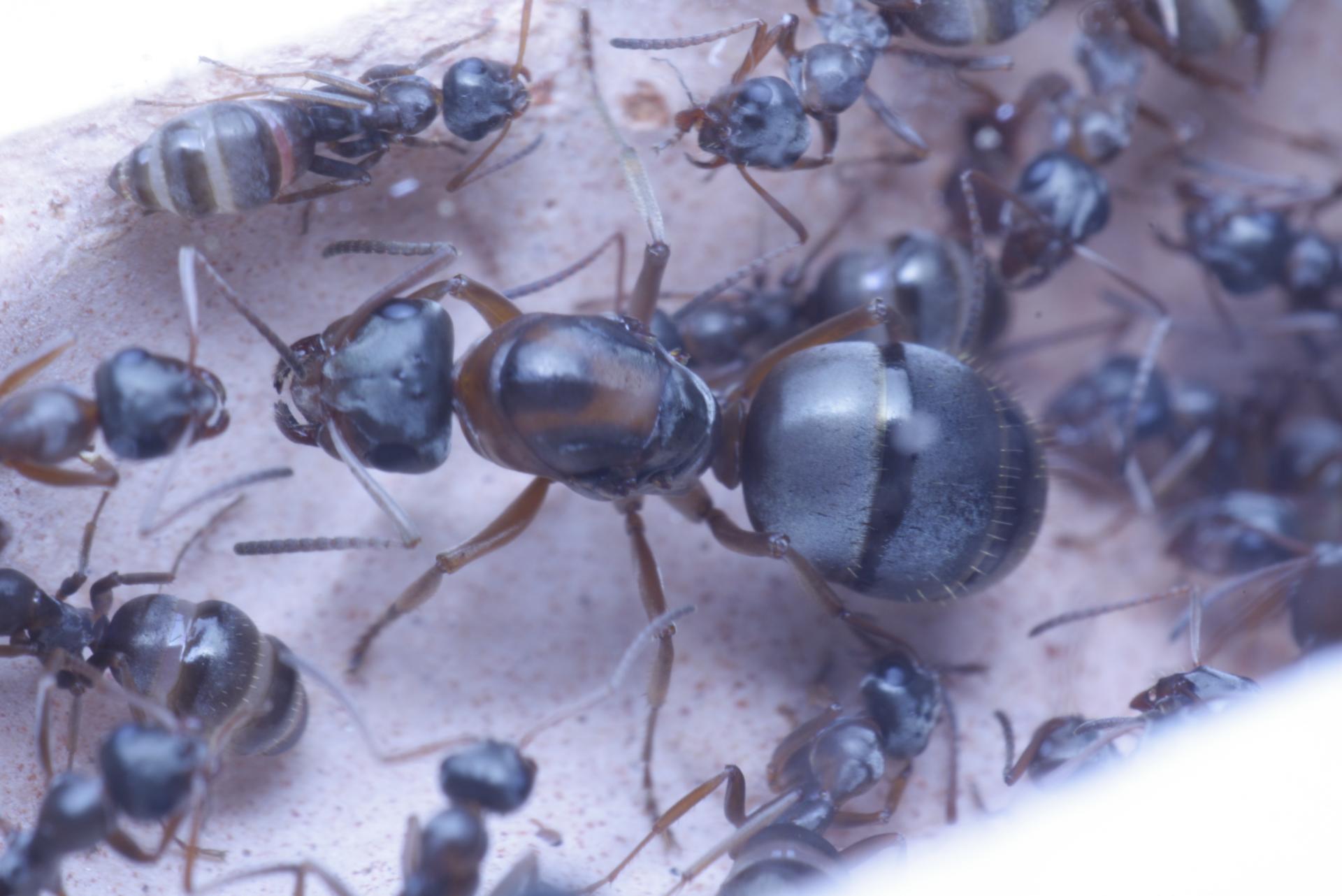 Out of hibernation, the colony already took protien today. The areas around the water towers look dark from defecation and over hydration on my part.

Colony A (formica neorufibarbis): Around 150 workers and around 50 fat larvae

Colony B: 7 queens 50 workers, piles of eggs, larvae and pupae

I moved colony A, F. neorufibarbis, into a THA type 1 fortress. They are staying in the lowest chambers with all their brood, making it difficult to get clear images. As the colony grows I'll be able to get better pictures. In the mean time here's some foragers breaking a cricket up They are in a tubs and tubes setup, planning on moving them out soon Nice work with these!

Colony A (formica neorufibarbis): Around 250 workers and brood

Colony B: 7 queens 90 workers, piles of eggs, larvae and pupae

Starting to fill their fortress with loads of brood. It seems spring time is the main grow time for this species. Today: Some brood in the outworld. Now the colony has basically doubled in size from the last image This colony goes crazy for sugar, I opened their outworld and they freaked out becuase they had brood there. They started running around but then discovered the sugar drops. Who needs pupae anyways? Colony A (formica neorufibarbis): Around 300 workers and brood

Colony B: 6 queens 150 workers, piles of eggs, larvae and pupae

Colony E: 3 queens 30 Workers. Growth seems to have stalled, it may be time to move them out of their dirt container.

They are now using the entire fortress, I'll need a new nest for them by August so I'm planning on making them something pretty cool. One of the brood chambers, most of my colonies are now hanging brood from the ceiling, maybe to create a better humidity gradient within each chamber? 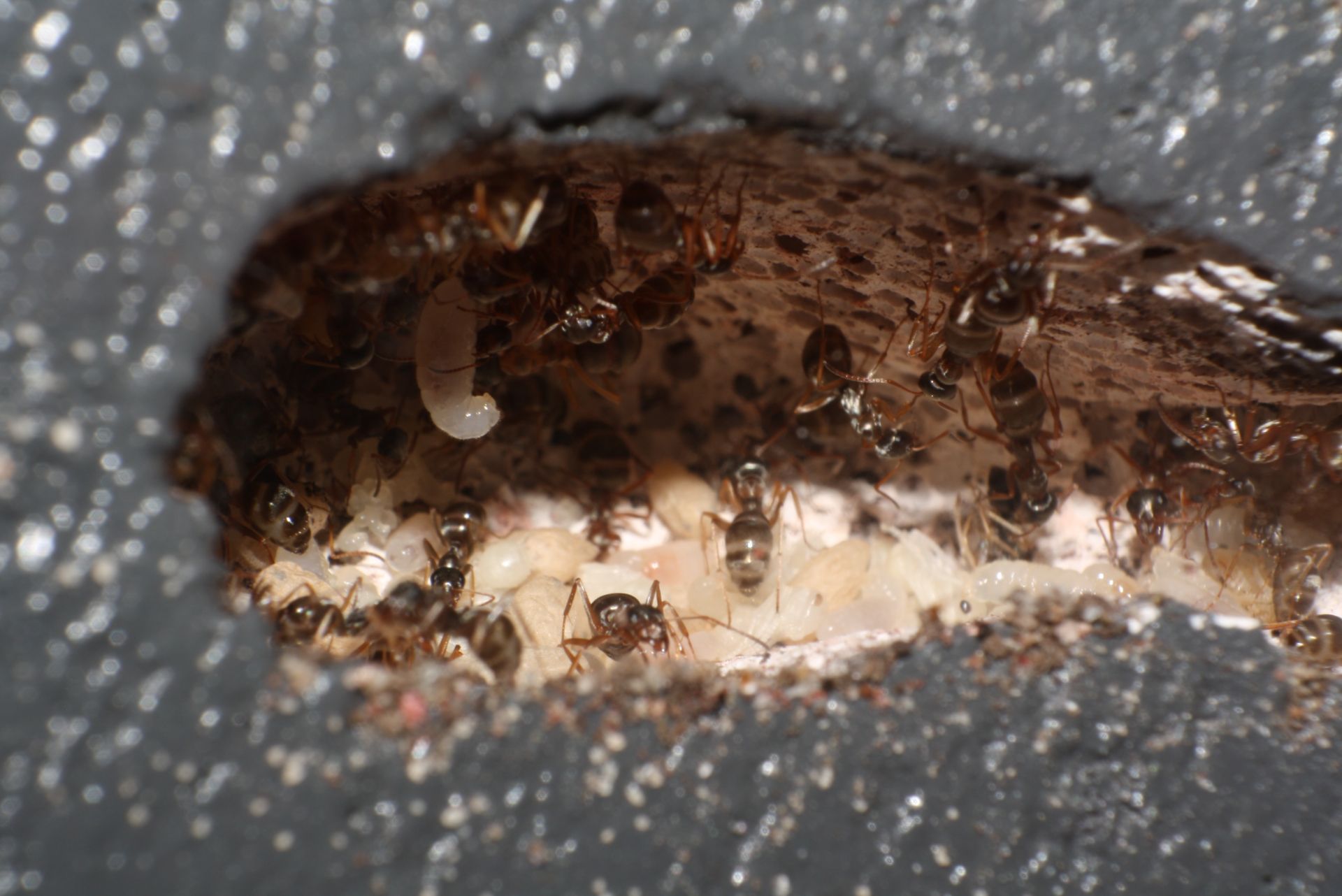 I moved this colony into a basic petri nest, it's quite interesting to see them sepate parts of the petri dish with dirt, creating their own chambers but not completely limiting visibility. The main chamber is in the bottom left of the image. I've never had problems with condensation for Formica species, and if anything it seems to contribute to the needed humidity gradient. I don't want to disturb them too much so any pictures I take right now will have poor quality. I know it's unlikely anyone will be able to identify down to species from this image, but any suggestions? Queen is about 11mm long. I found that the queen of colony A and a Formica neorufibarbis queen seem to be the same in size and coloration. I suppose Formica montanus could also be an option, and they seem to be a rarer species as well. Also tagged with one or more of these keywords: formica, journal, utah