1 reply to this topic

While I may seem like the "Strumigenys queen" to some, I've actually only seen a grand total of 10 species, which is barely anything compared to the 900 valid Strumigenys taxa alone. However, yesterday I did manage to collect a species new to me. Before sunset, I decided to go out an look for some more Strumigenys in a 3-5 acre hardwood/conifer forests remnant that's across the street from my house. Lower portions of the forest flood after heavy rains. There I've managed to collect Strumigenys rostrata, which appears to be uncommon around here, but not too much else except for lots of S. louisianae. For about 30 minutes I found nothing but some common forest ants like Ponera and a few Pheidole and Myrmecina. There are certain places in the forest I had never bothered searching before, and a massive rot hole at the base of a large tulip tree was one of them. I decided I'd give it a shot and stated picking apart some of the rotting wood on the sides of the hole. It was extremely crumbly, and contained a founding colony of Aphaenogaster fulva and some Ponera pennsylvanica. I took out my Davis sifter and started going through the leaf litter that had accumulated at the bottom of the hole. In my first scoop, which was a pretty small one, I actually managed to collect quite a few Strumigenys workers, some brood, and two queens, one of which was dead. For about another hour I continued searching the hole for more workers or queens, but I could find nothing. The sun had already set, so I decided it'd be best to head on back to my house for the night. When I got the Strumigenys into a temporary setup, I realized I had two species, a single worker of the large (relatively speaking), dark Strumigenys rostrata, and a smaller species with an extremely smooth, shining clypeus covered in silvery, appressed, scale-like hairs. This unique combination of features made them immediately recognizable as Strumigenys clypeata, which is common in most areas throughout the eastern US. There are around 10 workers, some larvae, and a single queen. There was another queen, but she was dead upon collection, likely recently deceased, as when I put her into a vial of preservative, she sank right to the bottom, as opposed to floating like older dead ants do. I'm just keeping them in a temporary setup for the time being, but whenever I get the materials, I will move them into one of the nests detailed here. Tonight, I will attempt to look for more of the colony (if there is more) and will also look for the colony from which the single Strumigenys rostrata worker came. Until them, enjoy these pictures I snapped of the colony and the S. rostrata worker: 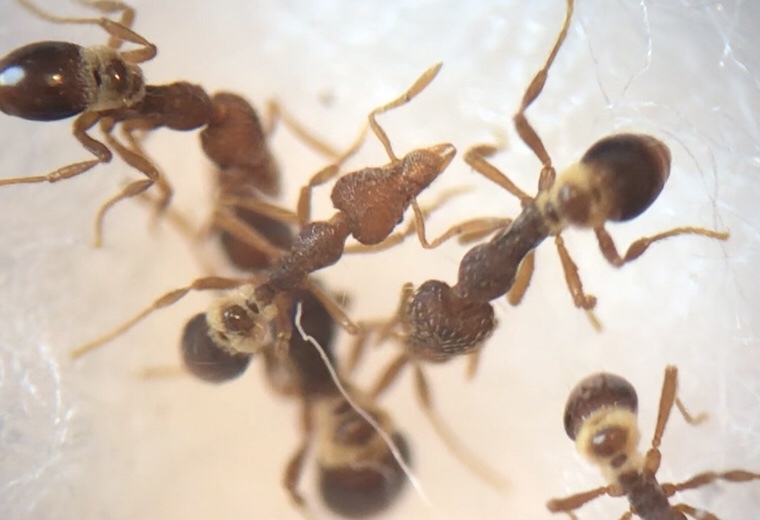 Strumigenys rostrata worker on the right, larger and darker. 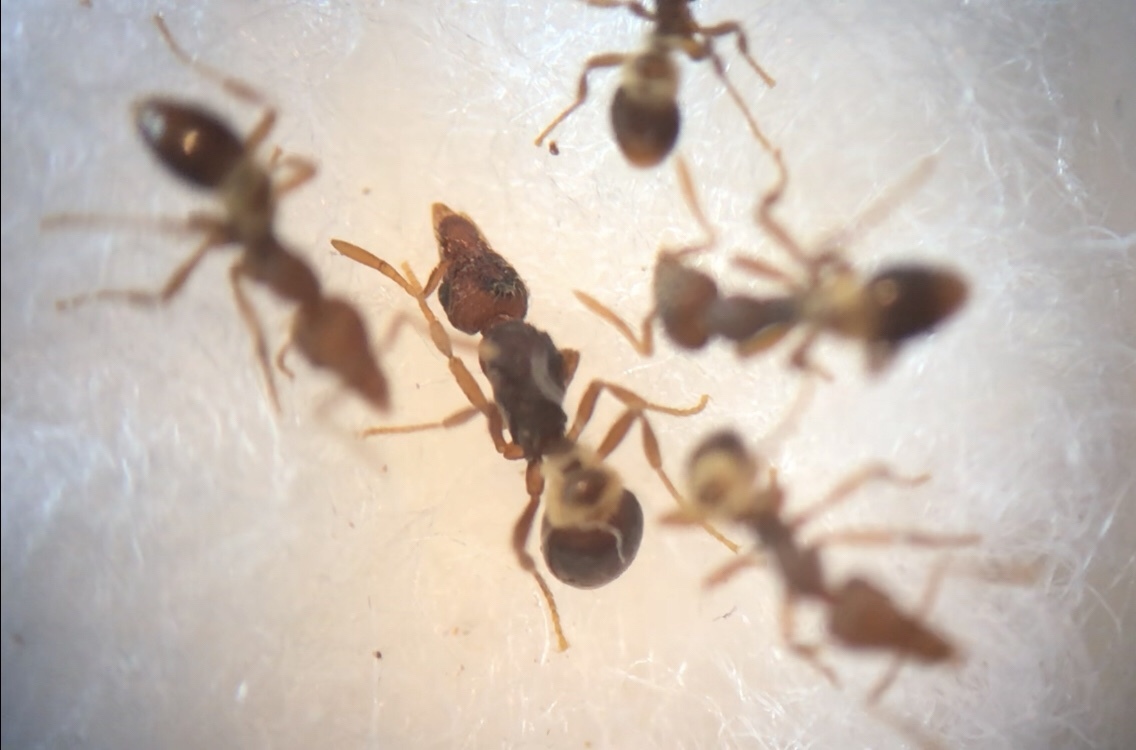 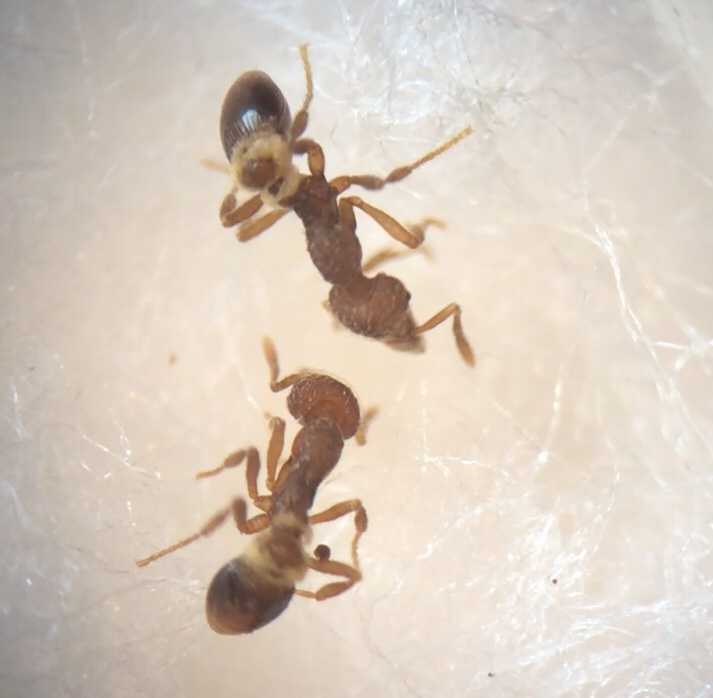 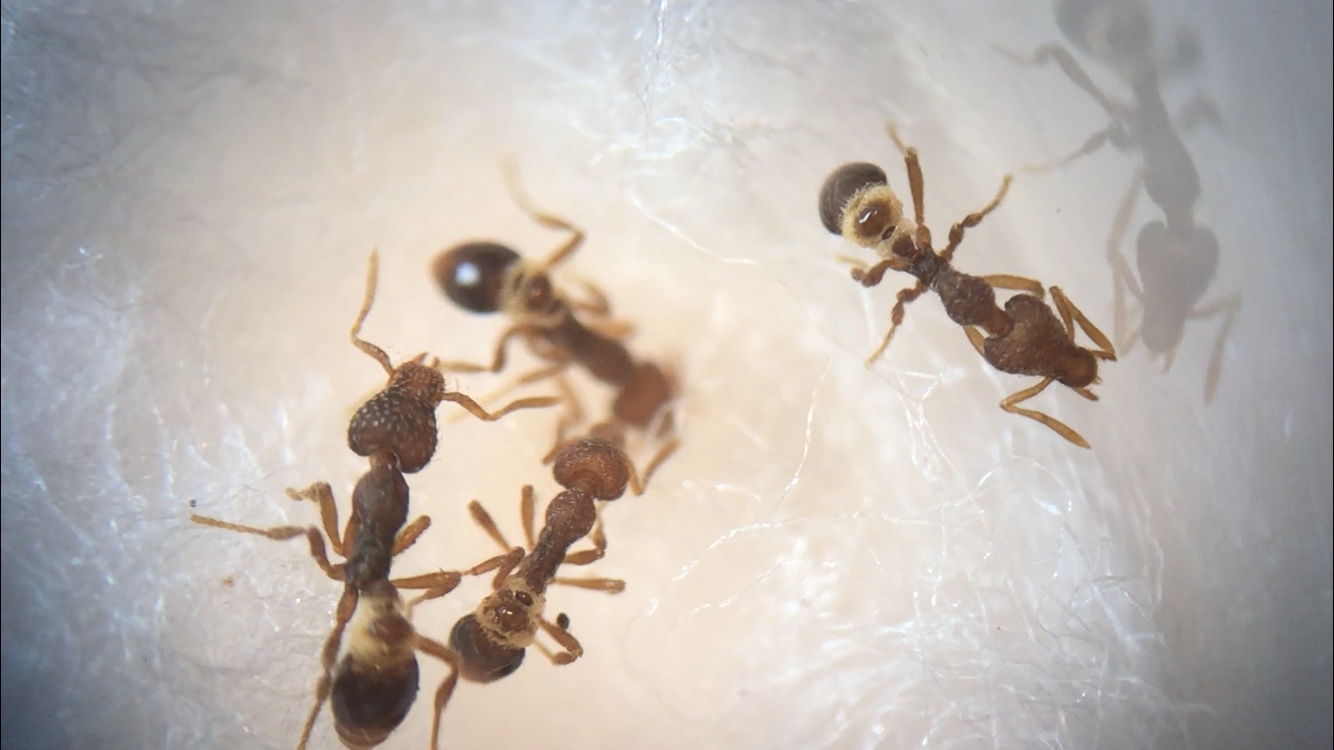 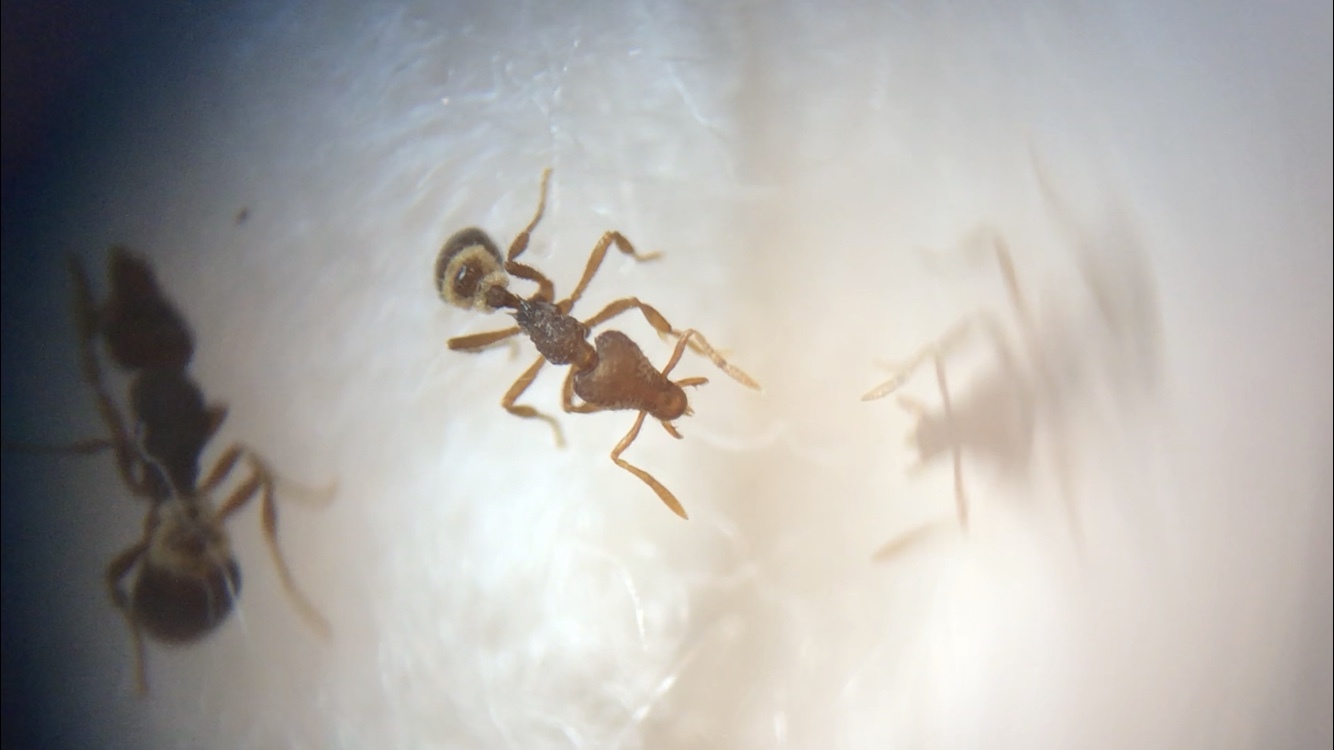 The prominent lateral lobes of the labrum are clearly visible here as two spikes between the mandibles. Protruding from each is a sensitive trigger hair, similar to what is seen in trap-jaw species like louisianae. 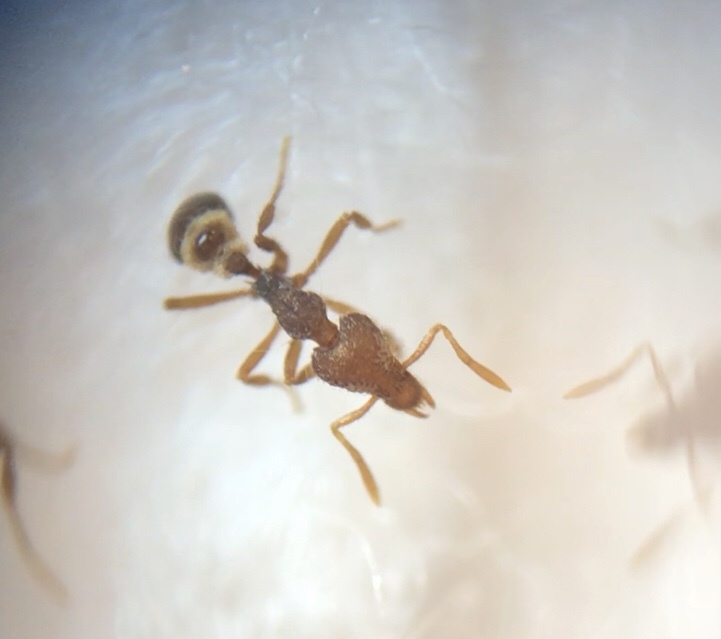 The labrum is folded forward when the mandibles are closed, concealing the vulnerable mouthparts. In trap-jaw species, each mandible contains a process that locks into a corresponding notch on either side of the labrum. This holds the mandible in place until the trigger hairs are stimulated, causing the jaws to release with tremendous velocity and force. In griping species like the "smithistrumiforms", no such mechanism is present, and the mandibles are used as pliers to grasp the prey while the ant recoils to sting.