89 replies to this topic

( 1 colony with a worker). Temnothorax  curvispinosus ( 1 queen with colony of 2 workers).

Size: 1 queen, many ants! and much brood!

This champ of a colony went strong through the whole winter increasing in size, and even having workers permanently in the outworld, which I consider as both, somewhat of an annoyance, and an achievement! I wonder how many workers there are by now though, too many to count that's for sure. Anyway, I'm counting down to their birthday as it will be in just a month + 4 days.

Well, I'm honestly unsure if I should say I'm proud or not, because they got new brood, which has been visibly, if painstakingly slowly, but they skipped hibernation because of it. Also, because of the deterioration of a bad quality outworld two workers escaped in the middle of winter >:[, hopefully once the new brood grows up it will make up for the losses. 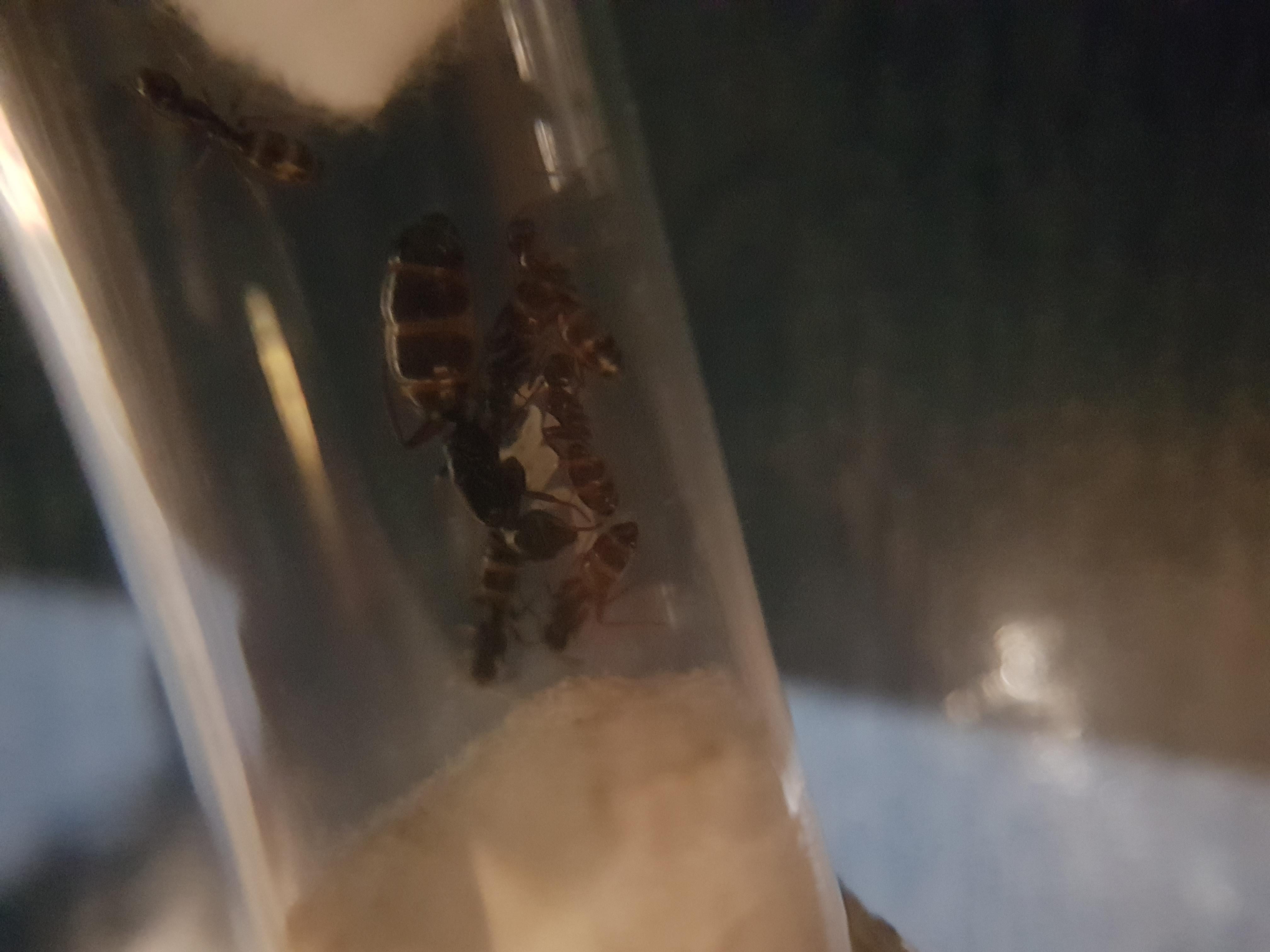 I've made an, um, a mistake with this colony to be honest, which is to say, I prevented myself from checking in on them. I can say for a fact host workers are alive, but I cannot check on the queen herself. I placed the test tube wrapped in foil in the outworld itself, and I cannot peck through the foil. Sorry about not being able to deliver here.

They've been waking up from hibernation for the past three weeks ( since I increased temperature by five every week ), and are now enjoying a steady 23 degrees celcius. I hope I will see brood appear soonishly. 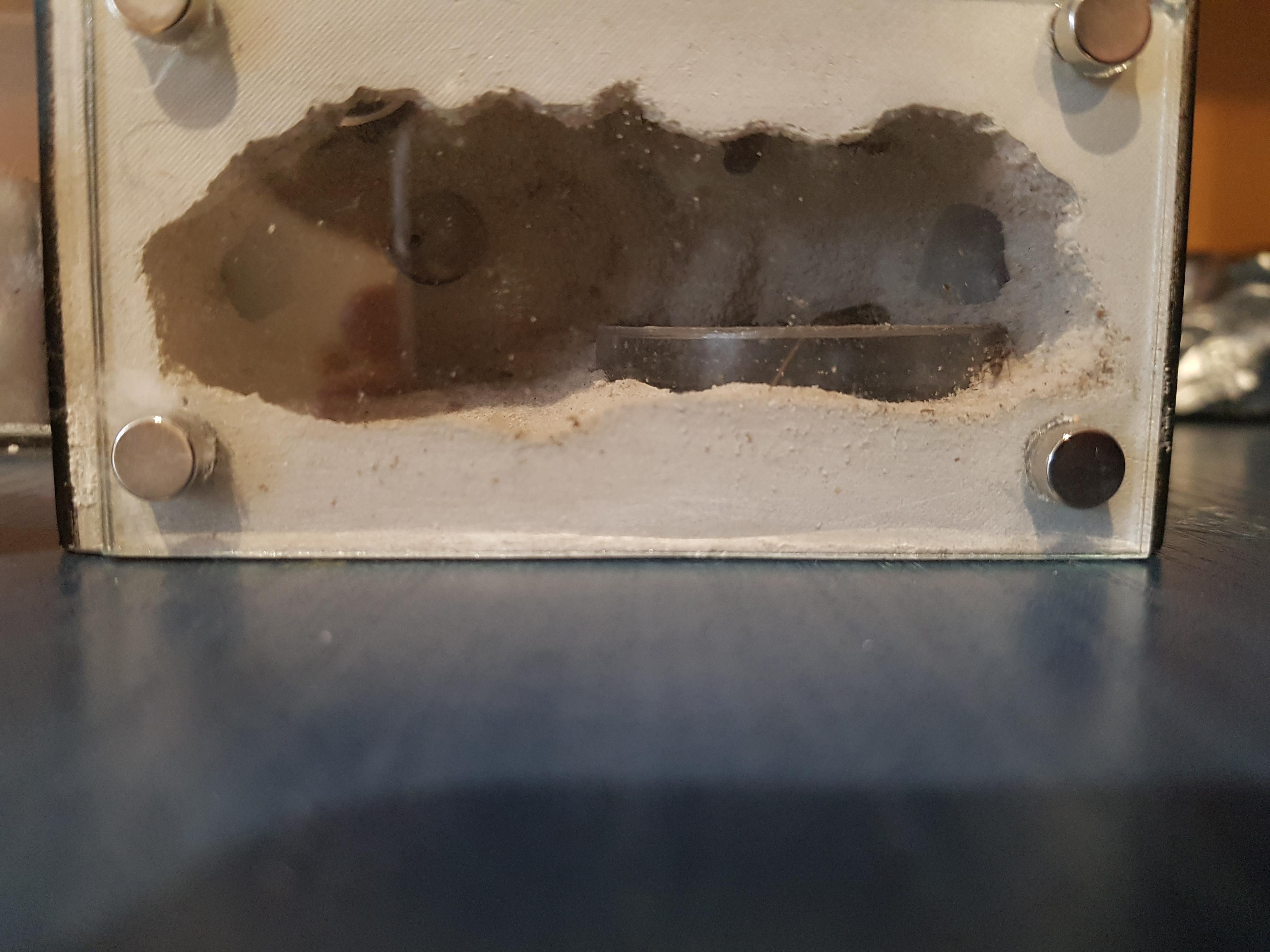 Overall, I rate winter positively for my ant colonies. I think at least. And I'm looking forward to see them grow in the year 2022.

Welcome back and nice work!

Well, a little over two months since last update, but I'm finally posting again. I'm sorry for not posting sooner, the death of my grandfather has somewhat killed my inspiration for stuff like this. Thankfully it seems it is coming back.

They've been growing, and growing, and growing, overall nothing new. I did add a new tube full of water for them since water in their original tube ran out. Strangely they are not vacating it for their nest, but I guess as long as they are happy. I missed to report their birthday, so, uh, happy late birthday to them.

You can spot the queen in this photo: She's near the entrance, around where the cotton padding ends:

Some workers always sit in the water tube, they're the watermen I guess, er, waterwomen. I was worried they are not going to increase in size due to lack of proper hibernation. Those fears however were unfounded, I guess higher-than-normal temperatures triggered something, who needs hibernation when you have global warming, heh.

That was a bad joke.

Anyway, when I was feeding them today I picked up a piece of leftover exoskeleton from a cricket and when I placed it down a worker just zoomed out of it, I was stunned just by the speed, and here I thought Camponotus were the slow ones

, anyway, I eventually captured her back. By the way, do note the one or two bigger cocoons under the Queen, I think we have some majors on the way. Ah, right, and another late birthday to them. 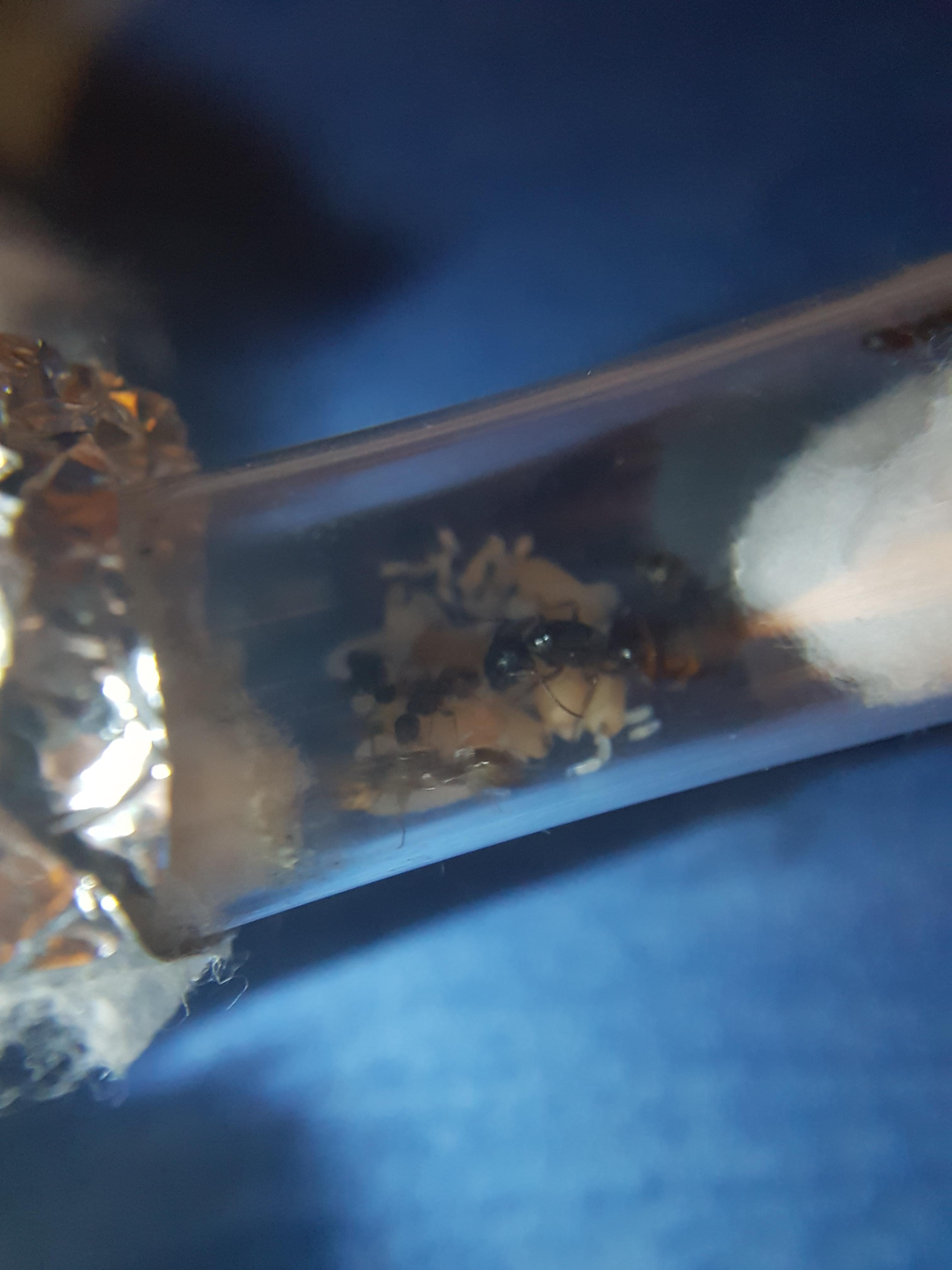 Size: A lot of workers, a lot of brood, and one queen.

Well, look who exploded in numbers. Those gals. They became very brave very fast too! No longer afraid to hang out in the outworld, they gained a habit which is as cute as it is irritating as they've started to hang around the lid. 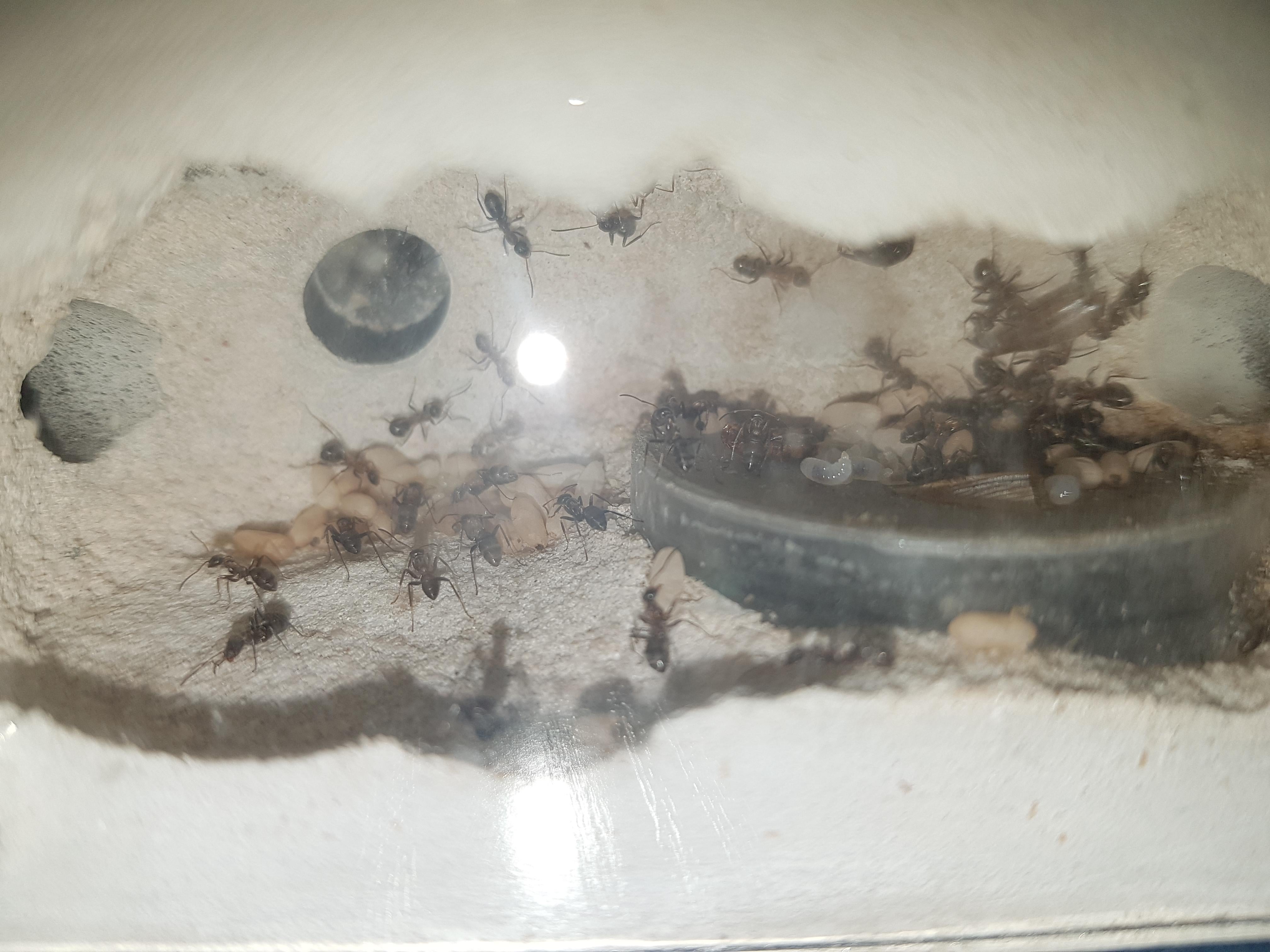 Unfortunately no signs of biological workers, and due to my predicament I can't check if they're just not coming out, I'm starting to guess the host workers may have rejected the brood but not the queen, rather ironic, I unfortunately think this colony may be headead for failure.

Last months were good, and without any major accidents or disasters, the course seems straight, and it is a good one!

Sorry for your loss. Keep your inspiration up, even through hard times.

We have a sucess! I've seen it with my own two eyes, the distinctly non-Lasius niger, compact and yellowish Lasius (cthonolasius) biological worker outside their test tube! We're halfway to a fully established colony!

Well, the vacations have effectively prevented me from updating this as I hoped. Note, all photos are by now about two weeks old, sorry about that.

Well, you know the drill by now I think, they've grown, outworld is even harder to clean ( if not impossible, thankfully they do have a population of springtails in there ), they've been ever so slowly moving out of their test tube and into their nest, that's about it really. I really need some kind of ant counter.

Test tube, a bit less populated then before, and nest a bit more. I have no idea where the queen is by this point.

Size: About a dozen workers, at least two majors, 1 queen, a bunch of pupae.

They've been growing rather nicely, and got a major, the size difference is, honestly, not as big as it is with other Camponotus species, but you can still quite clearly see it. 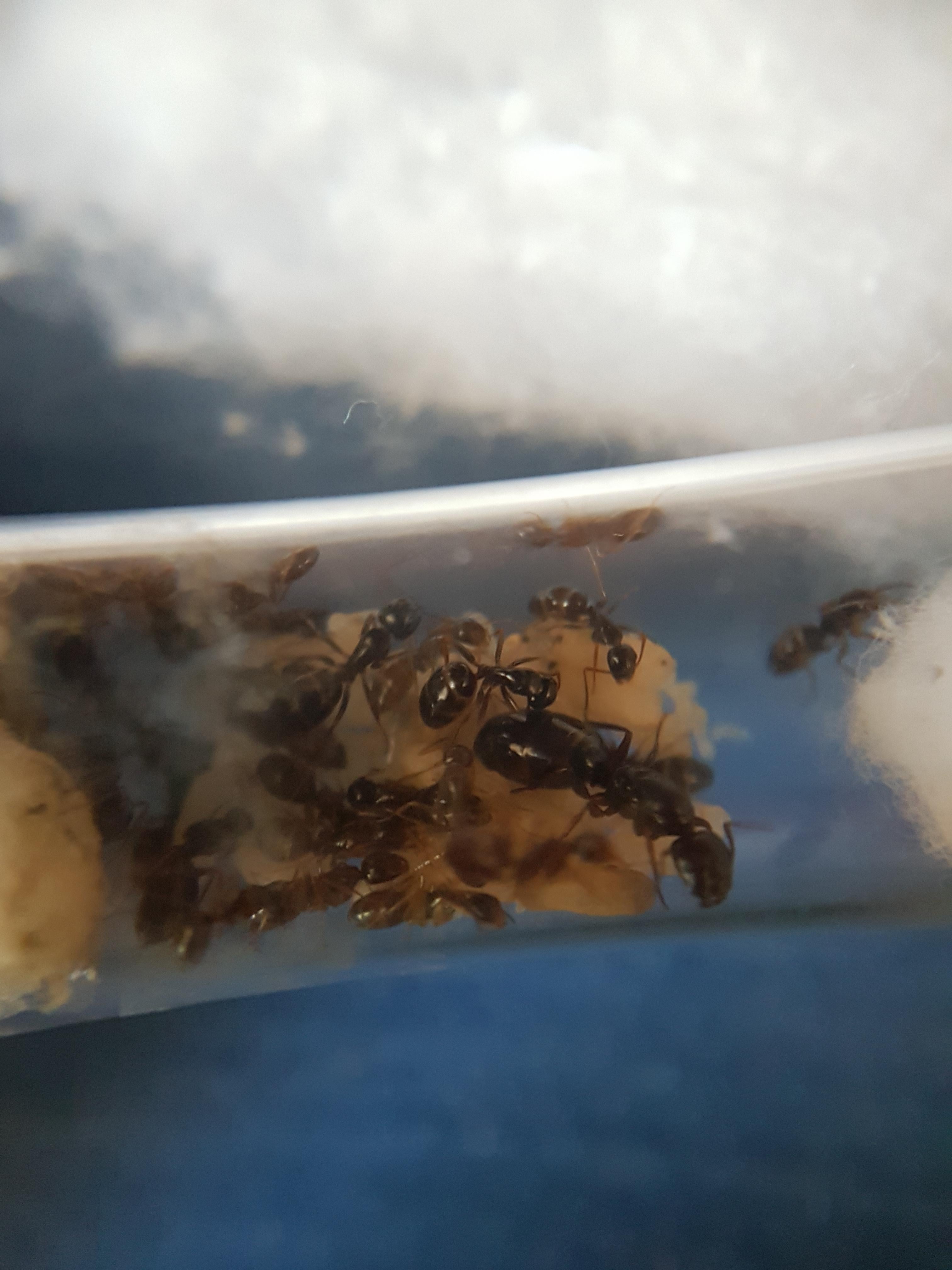 Same as always, same as always... The, presumably, biological worker I seen last time is nowhere to be seen, I hope they've just been hiding the whole time.

They've grown a lot, as is usual for them, I'm rather suprised their after-hibernation growth hasn't yet ended, but I suppose that's a good thing. I connected a new outworld, which they've begun to actively patrol, and nearly completely abandoned their previous outworld, which I suppose is a good thing, even though it does prevent me from cleaning there. I think a springtail population is developing there. I'm wondering if an alternating outworlds used for feeding would allow for easier cleaning. 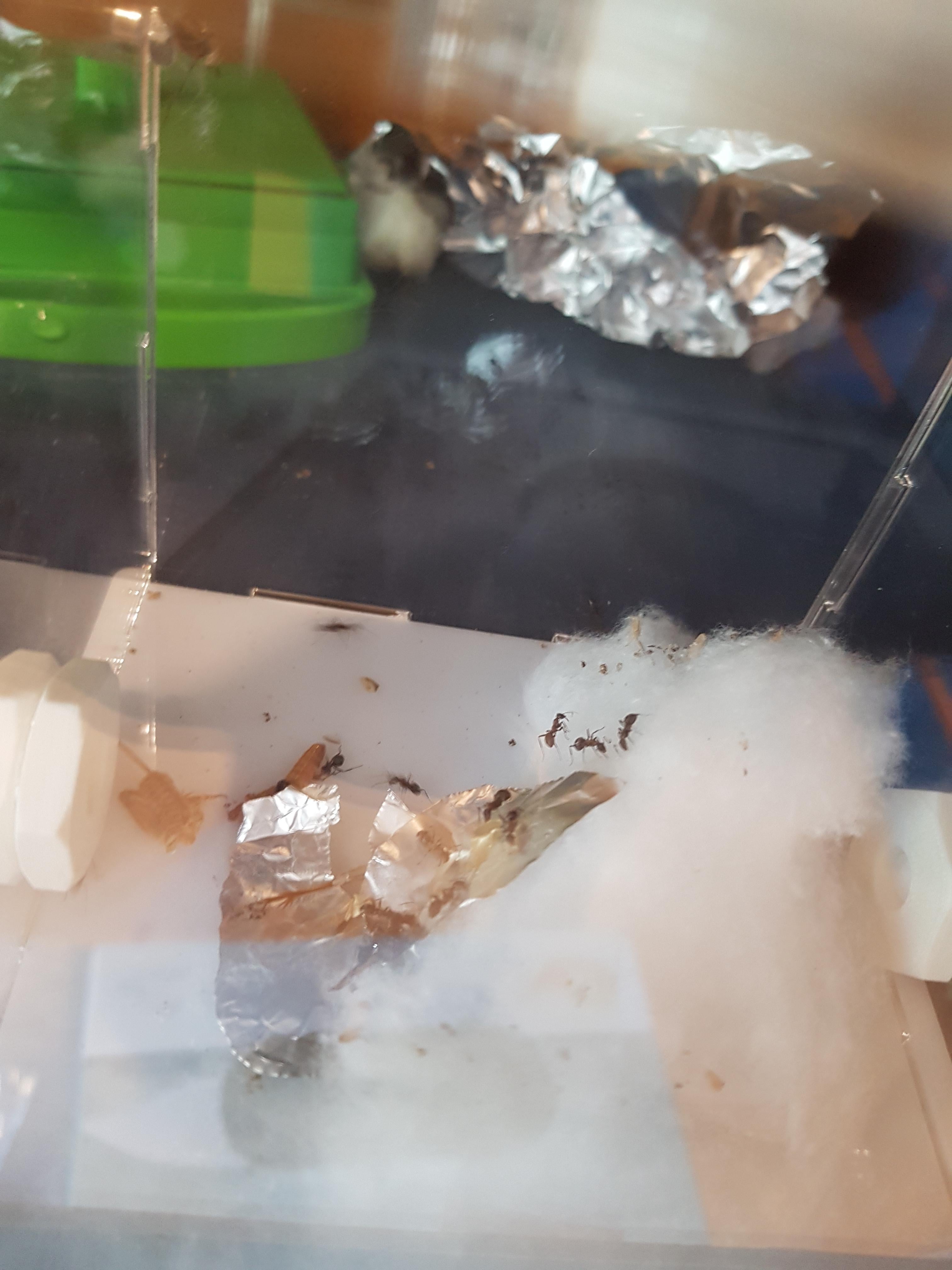 By the way, anyone knows what the brown spot is? It's gone dark since. As you can see the glass in general is fairly unclean, so I kind of presume it's just my ants being messy eaters. 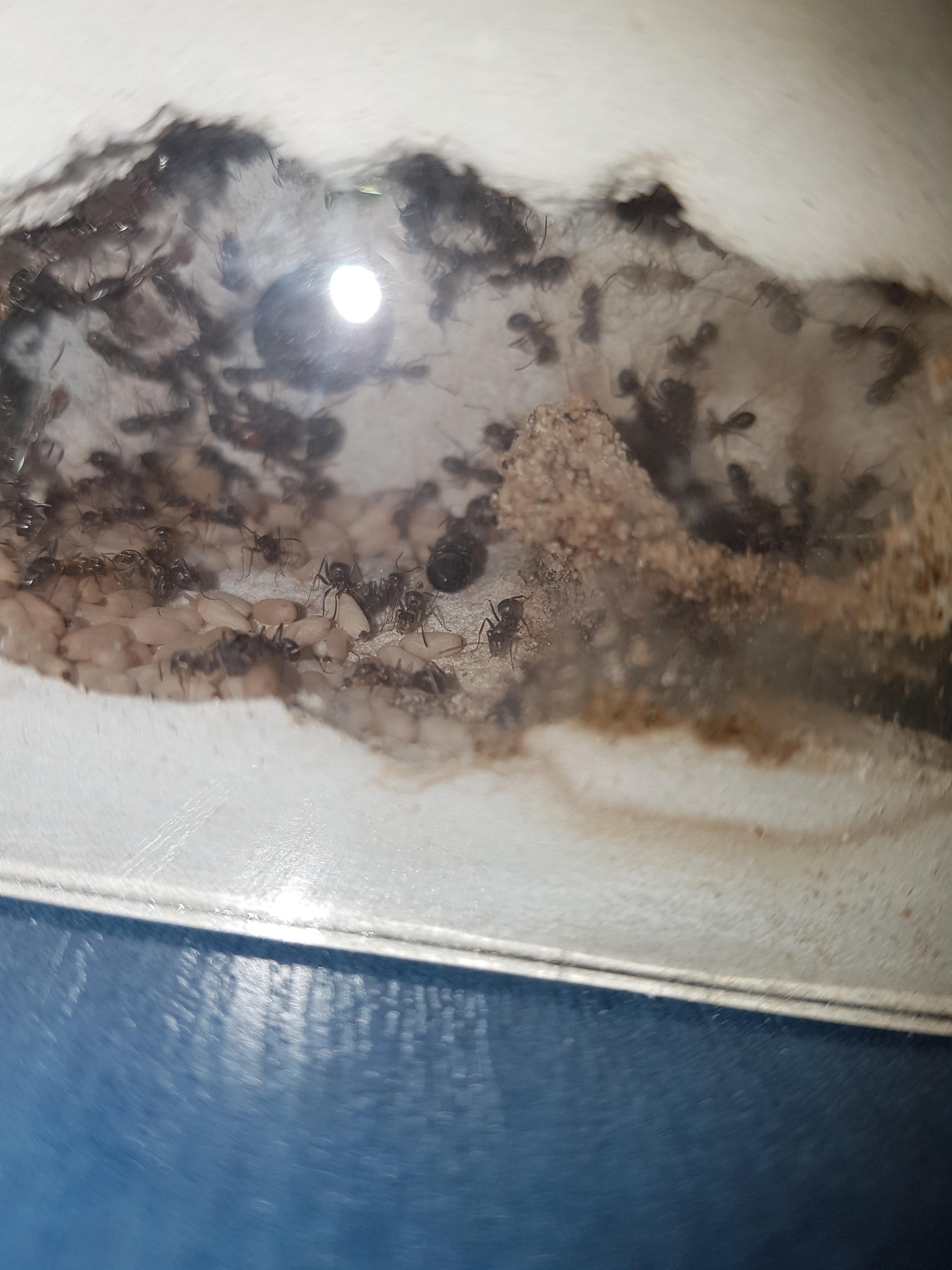 Still all good. I've been enjoying boating in Masuria, but due to this the ants have been switched to a three day cycle of feeding instead of their usual two day cycle.