I recently constructed a new Davis sifter, as the one I made prior had some very flimsy and fine screen which broke after a few months. I've built this new one with some fairly strong chicken wire that should last a few years, if not longer. Anyways, I decided to test it out in the lot beside my house where I know there are a ton of Strumigenys of all different species (and that I know is set to be developed

). I found a nice pit where a tree stump used to be and started working there. I came across some Strumigenys workers fairly quickly. I preserved three in 97% isopropyl alcohol for later identification and started to collect some live workers. I collected as many as I could find by sight and put the rest of the detritus into a 1 gallon freezer bag to run through a Berlese funnel. I used the Davis sifter some more but could not extract any more workers. I ran the sample through the Berlese and got about 7 more workers (around 15 were present at this point). The next day I went back out to collect the rest of the colony. It only took two more Davis samples for me to come across the remaining portion of the colony. Lots of brood (mostly eggs and a few young larvae) was present, though I must've collected most of the workers prior, as there were only 2 workers collected here. I ran the rest of the soil through the Berlese funnel for a few hours and managed to collect the queen. The colony contains around 25 workers, a single queen, and quite a few brood items. I plan to keep these ants in one of Adele Fielde's nests seen here. I've been trying to feed them some collembolans, but so far they have yet to accept any. I may try either some smaller collembolans, symphylans, or maybe some globular collembolans. In any case, I'll try and keep this journal updated and this colony alive.

New eggs have appeared, and quite a few of them at that! I guess the queen's been pretty busy. The colony has also accepted some springtails. I guess they just needed some time to settle in before they decided to eat.

One of the existing larva has been growing bigger and feeding on some of the springtails vigorously. The colony has been settling in very well, and are currently just nesting in a little vial with a moistened cotton ball in the bottom. I'll move them as soon as I'm able to construct one of the nests I've been designing. It shouldn't be too long now before I'm able to make it.

So when I first collected the colony, there were tons of eggs that I collected with them. However, whenever the queen laid her own eggs, I noticed the ones I collected were way too big to be from the Strumigenys. The eggs hatched a couple of days ago, and they turned out to be some sort of Poduromorpha, or as I like to call them, gummy bear springtails. In any case, Strumigenys don't care to feed on these particular springtails, so are leaving them alone. I should probably get them out, but honestly, they're not causing any harm, and the ants don't seem to mind them, so I may leave them. We'll see what happens

So the Poduromorphs are all gone, and the Strumigenys seem to be killing off the rest, not eating them that I've noticed though, which aligns with what Wilson (1953) wrote about this and many other Strumigenys species about Poduromorphs not being consumed or even attacked in most cases.

I got some photos of the colony! All photos can be viewed here on iNaturalist. 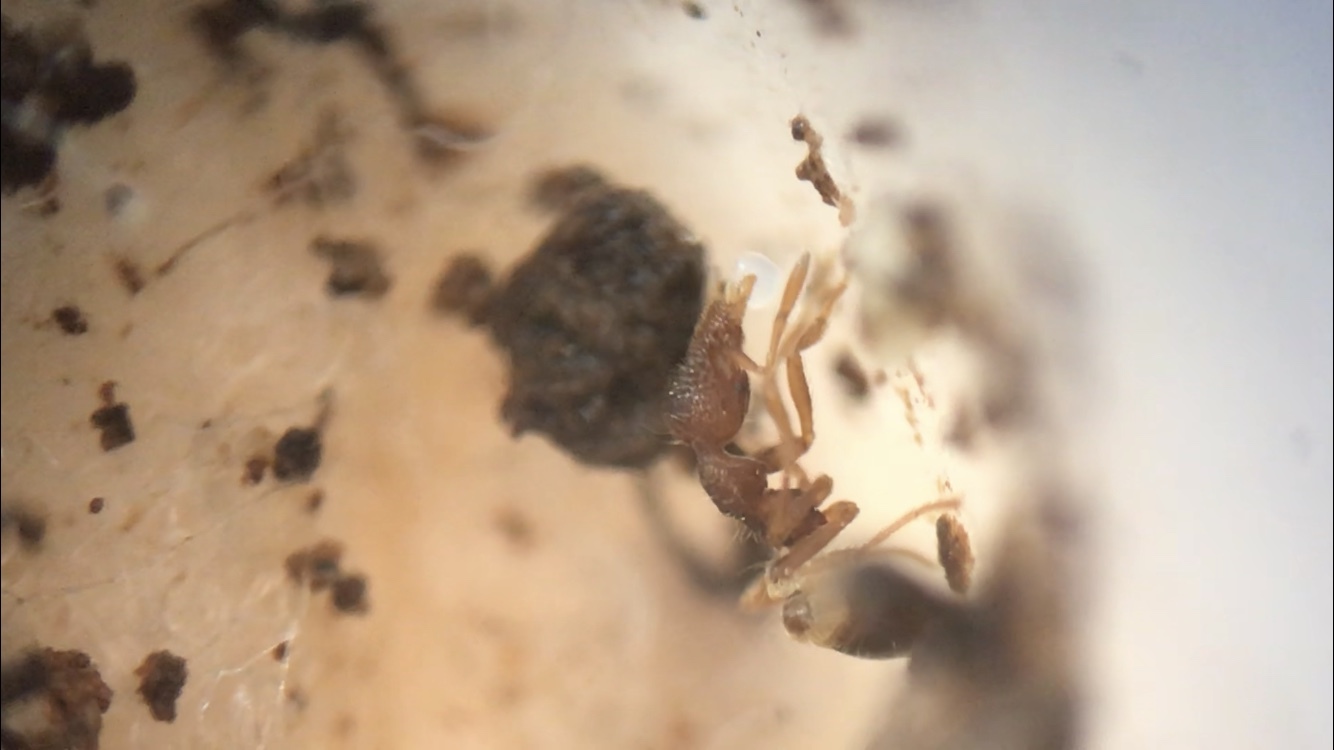 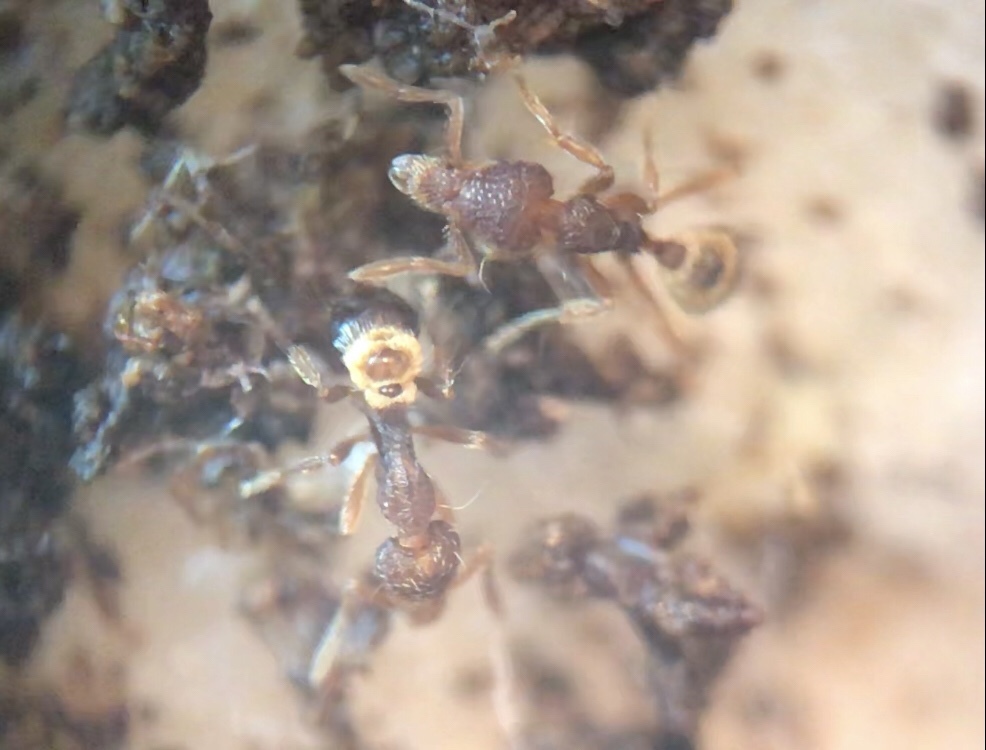 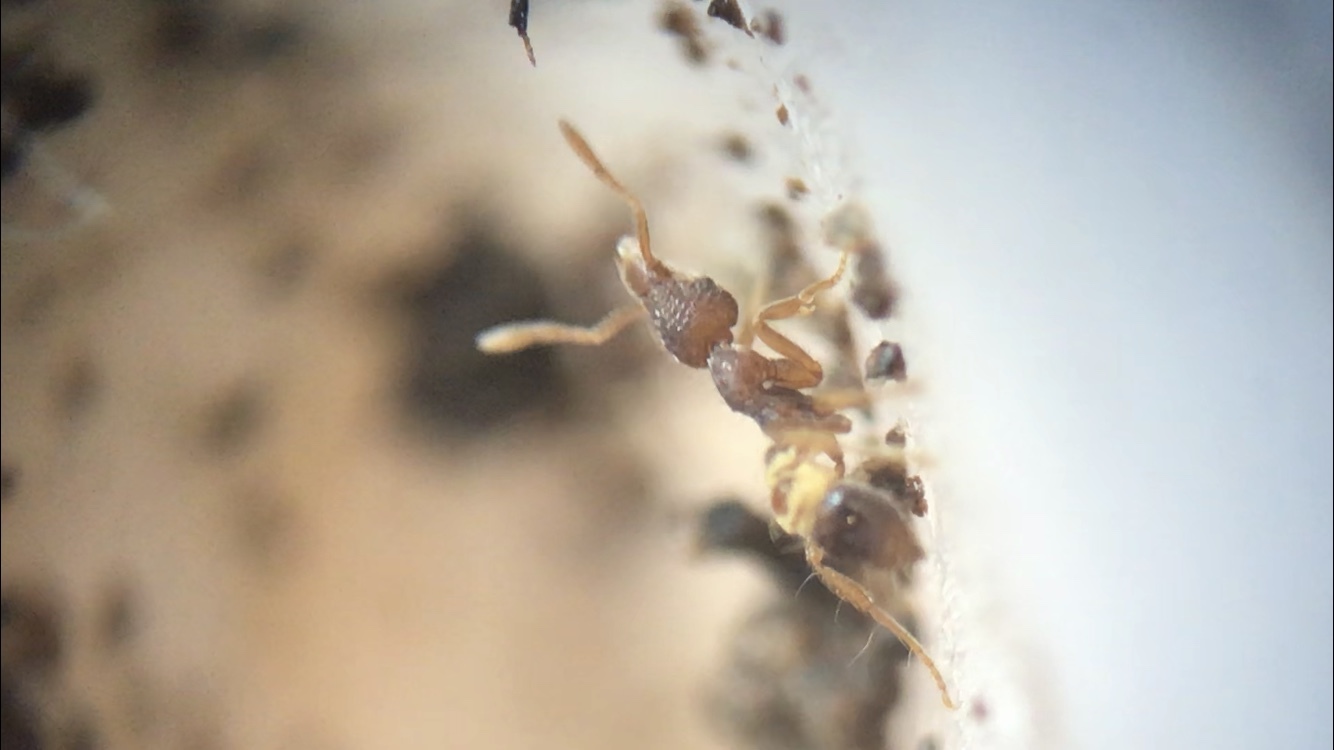