These queens were caught on July 6th. They're really big and that's about it. From my crude measuring this species clocks at around 12-13mm which would make it the second largest parasitic rufa-group Formica species in B.C after F. oreas if I'm not mistaken. They also have comically small gasters in proportion to the rest of their body.

For such a large species the queens aren't very aggressive, in fact they are quite chill, at least the specimens I posses. Actually none of the queens have killed any of their hosts or injured any. Occasionally queens lunge with their mandibles but normally they either run, do nothing, flail a bit or aggressively clean/antennae the worker bothering them. I suppose puny Formica hosts don't pose much threat to these gentle giants. Anyways at some point I introduced hosts to the queens, I think 2 or so days after catching them. I live in a desolate wasteland of a city in which no brood of any sort can be found for miles so I used adult workers.
​Queen BA received a mix of F. pacifica and F. transmontanis workers, along with 5 F. pacifica pupae from a captive colony.
Queen BB received a mix of F. podzolica and an unidentified black Formica fusca-group species, along with some brood of the unknown species.
Queen BC received the same as Queen BB but one day later. The F. podzolica are from a captive colony that lost their queen earlier this year, estimated they have around 30 or so workers. Regarding the F. pacifica/transmontanis they are very grabby. They like to bite and hold on. I am not sure if they actually ever bind with their hosts, as my impressions of them as of so far are that they are very accepting species but not particularly devoted species. Indeed any trophallaxis I've witnessed between the two were brief although they do seem frequent. The queen is clearly being fed as evidence by her gaster and they have since stopped attacking her so all seems to be going well. In comparison to the F. pacifica these gals are not very clingy, they're certainly more aggressive though. They seem to avoid the queen as a primary means of rejection rather than outright aggression. F. podzolica are notoriously bad hosts and I think it's quite possible this queen is being reared by the F. fusca-group rather than the podz, who are just helping out the fusca. All of the pupae for this queen has already eclosed as well so that may have helped but two of the pupae seem to have eclosed dead. Overall she is being tended better than queen who has F. pacifica/transmontanis as evidence by her gaster, I have also witnessed proper trophallaxis for these. This queen has unfortunately not gotten along with her hosts, who just avoid her. The hosts stopped being aggressive around the same time frame as the other queens but they never accepted her as evidence by her small gaster. I tried adding F. podzolica pupae but to no avail. I recently moved her with a F. pacifica/F. transmontanis combo and added back the 5 F. podzolica pupae. At least a few of the workers seem to have accepted her to some degree as I witnessed trophallaxis, but the same workers who did that also groomed and attacked her. One definitely did not accept her but I removed that one.


Observations on the founding of these particular F. ravida.

Method of introduction: (aiming for at least 20 host workers)
Chill workers of different colonies/species in fridge
Freeze workers until knocked out (very important, even if it means a one or two casualties)
Introduce workers together into tube
Introduce queen into tube when the workers are still knocked out
Shove queen into fridge (if possible, do not do this with weak queens or queens that recently have been heated)
Monitor to make sure no immediate threats to queen (i.e no workers dog piling her)
Add pupae or some brood item
Monitor for week


As stated earlier these queens are very relaxed, with limited resistance towards workers and so far no killing of the workers or fatal injuries. Like all parasites the sooner they receive hosts the better. Additionally success of "assimilation" is reliant on how stressed the workers are. When the workers are stressed such as due to light or vibrations they default to attacking the queen but otherwise may leave her completely alone, this is particularly more noticeable for F. pacifica. This behavior seems to continue indefinitely but appears to be virtually absent past the first week, even in the case of Queen BC. I suspect brood may also help in the introduction as it gives the workers something to do and resemble more to that of a functional colony. That and because adult workers are inherently unreliable. 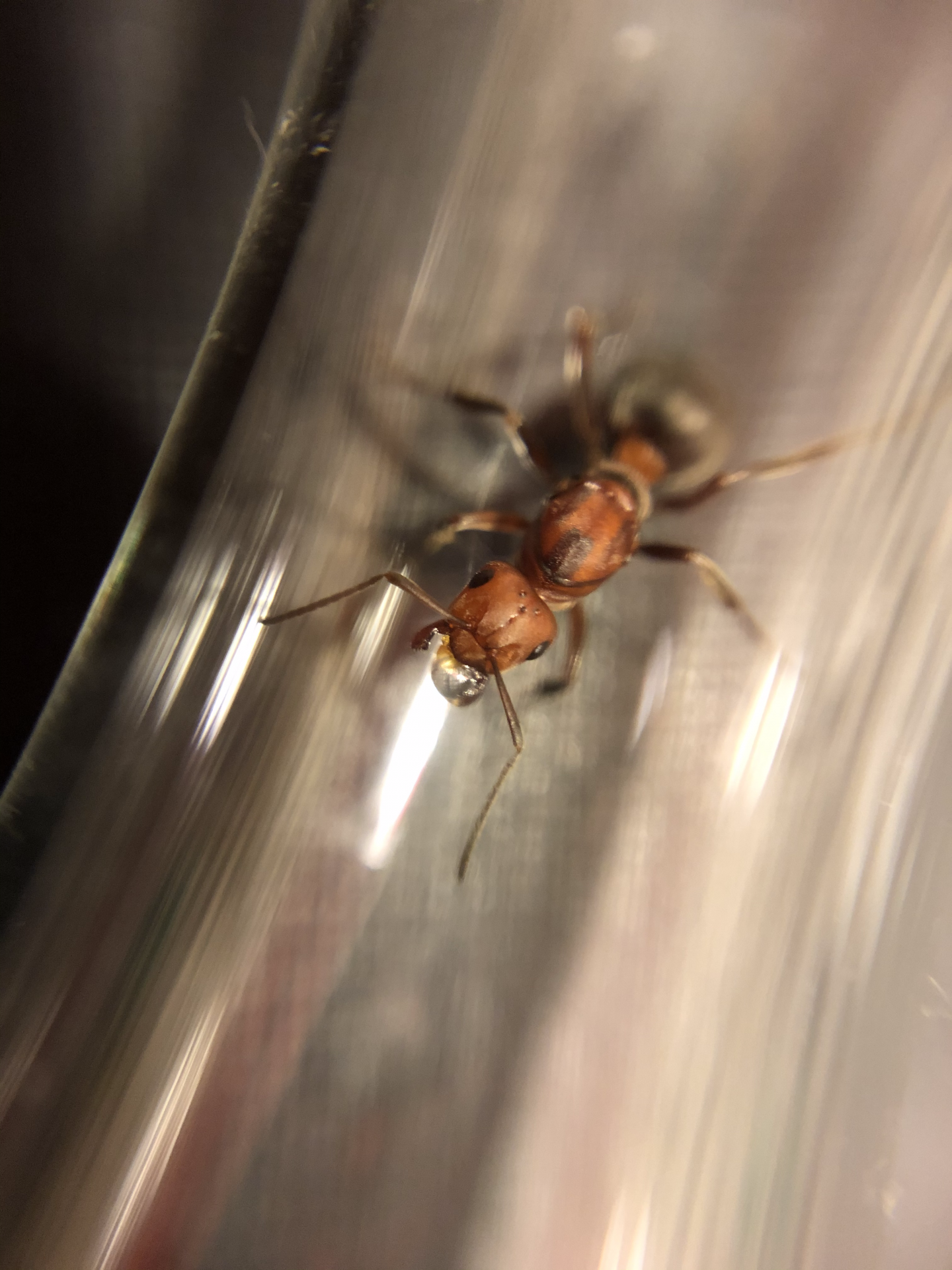 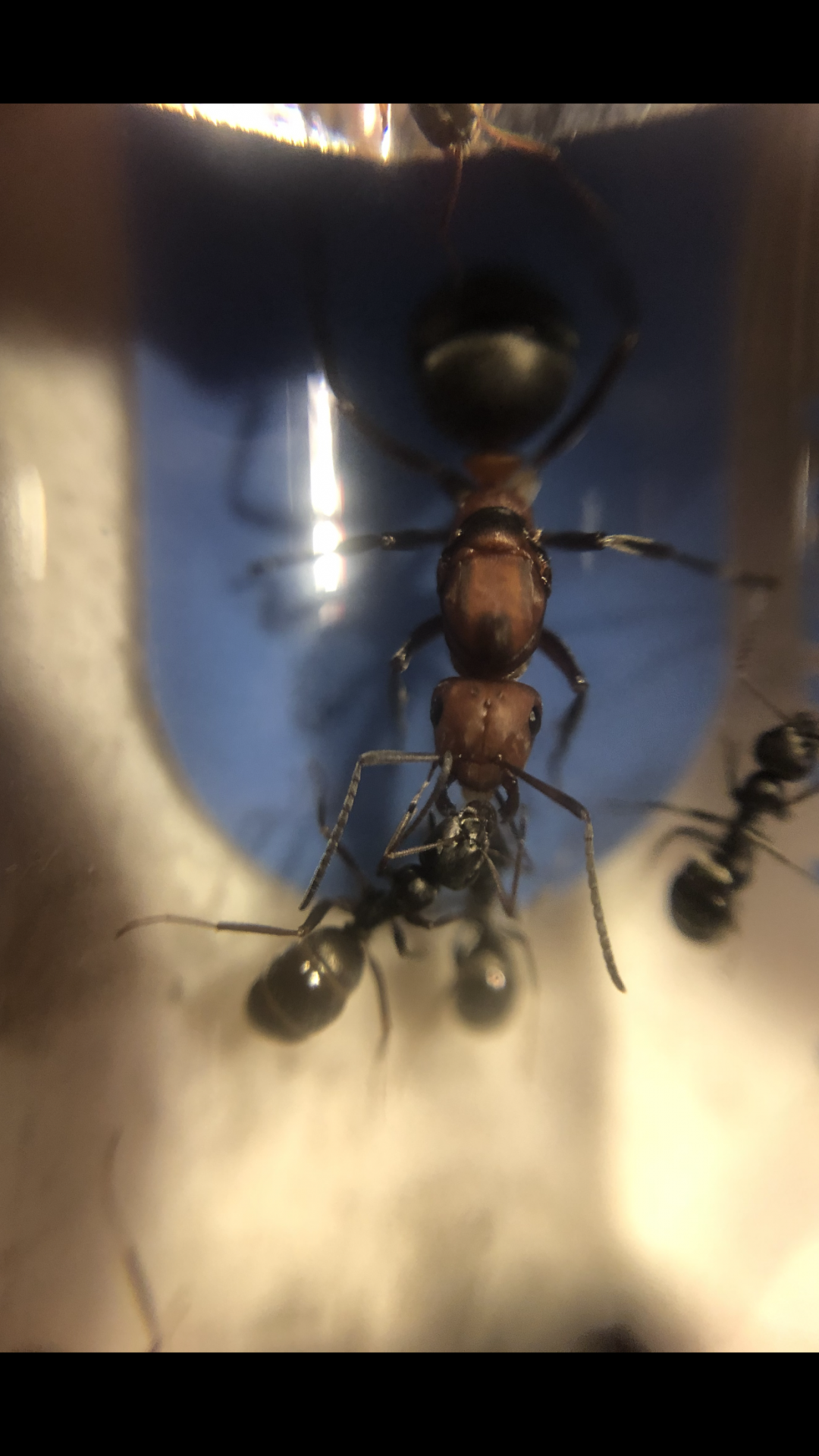 I have also noticed two methods of initiating trophallaxis practiced by these queens. The first type involves the queen opening her mandibles, keeping them open and exuding a small amount of food in the form of a droplet, presumably to attract workers. Although the queen in Fig. 1 had no hosts at the time, I think this is what it was trying to do, if not whatever the queens were doing in the tube with hosts resembled that. This method of trophallaxis is "passive" as the queen does not move while doing it. If no workers come after about a period of 5 - 20 seconds the queen relocates and may do it again. I have not witnessed the trophallaxis resulting from this to last for an extended period of time but perhaps it does not need to or works better under unstressed conditions such as in the dark. I am also unsure if the queen gains any food from this and perhaps she is actually loosing food.
The second method is "active", the queen will seek out a worker and aggressively/rapidly antennae her until she chases the worker away or initiates trophallaxis. This is quite odd to witness as it is done in quick succession; from the choosing of a worker, the chasing and antennaeing all seem to happen whithin a few seconds, maybe two or three. If successful this method usually results in full blown trophallaxis. In the video below it resulted up to three workers trying to engage in trophallaxis.

I think autocorrect may have struck again on the title........

Haha, I imagined ants eating ravioli pasta when I saw the title.

Also, cool looking ants, hope all of these guys succeed.