Hey guys. I have 2 colonies of C. laevissimus at the moment with another one incoming soon. I know these ants don't really grow all that fast and it's already July, but I thought I'd document them for now and see how far they get by the end of the year. I hope 15 workers might be a reasonable estimate, but they both have very few workers and I'm probably going to hibernate them by November.

I was so used to having calm C. vicinus pose for photos, and when these started freaking out in the lightbox, I was really confused

. I managed to get a few photos, but there is some ribbing distortion in the tubes. I do sort of want to move them out into these new 18mm tubes that I got, but since there's really no reason to other than my personal satisfaction, I just let them be.

The first colony has 2 workers and 2 pupae. 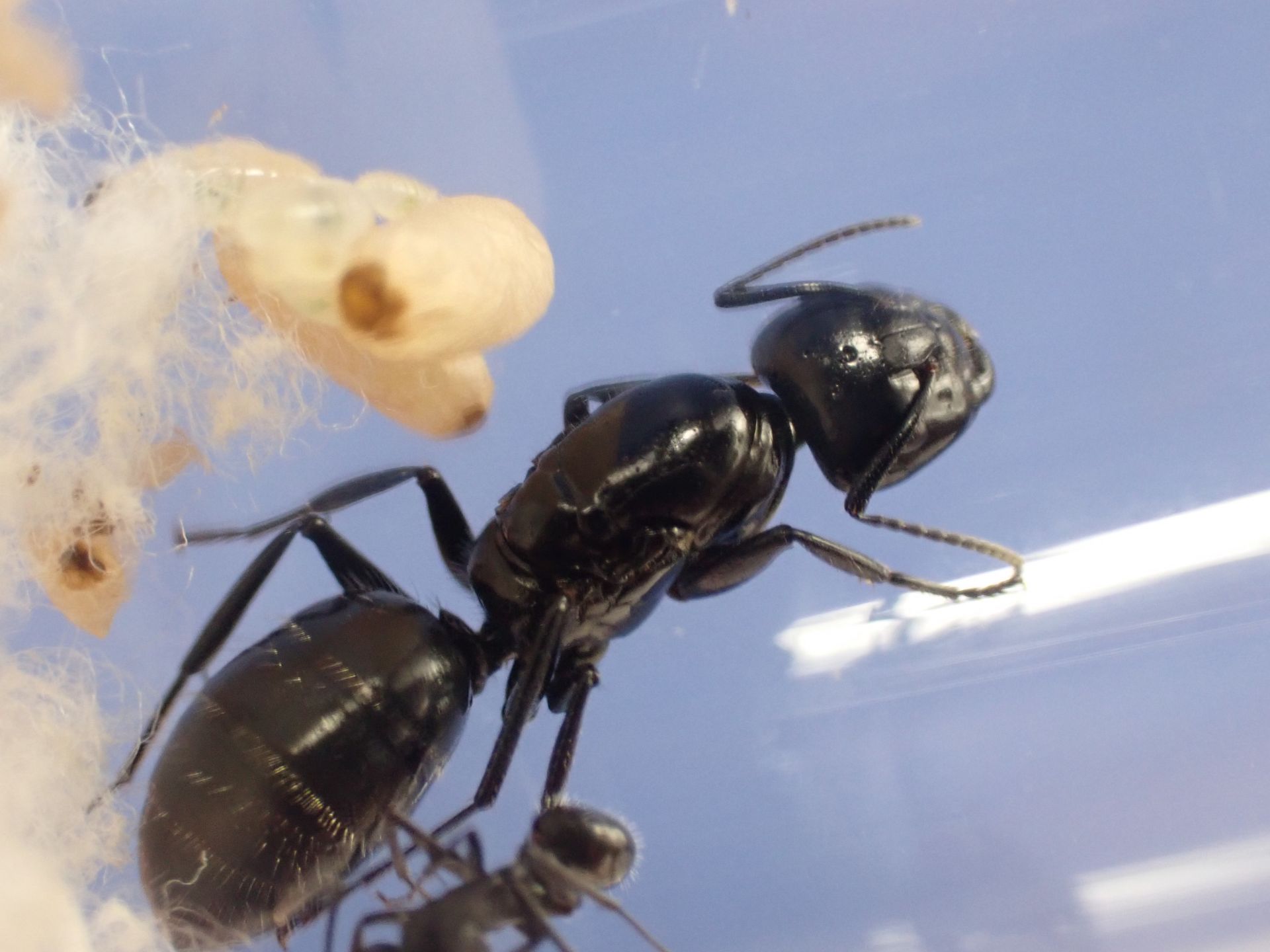 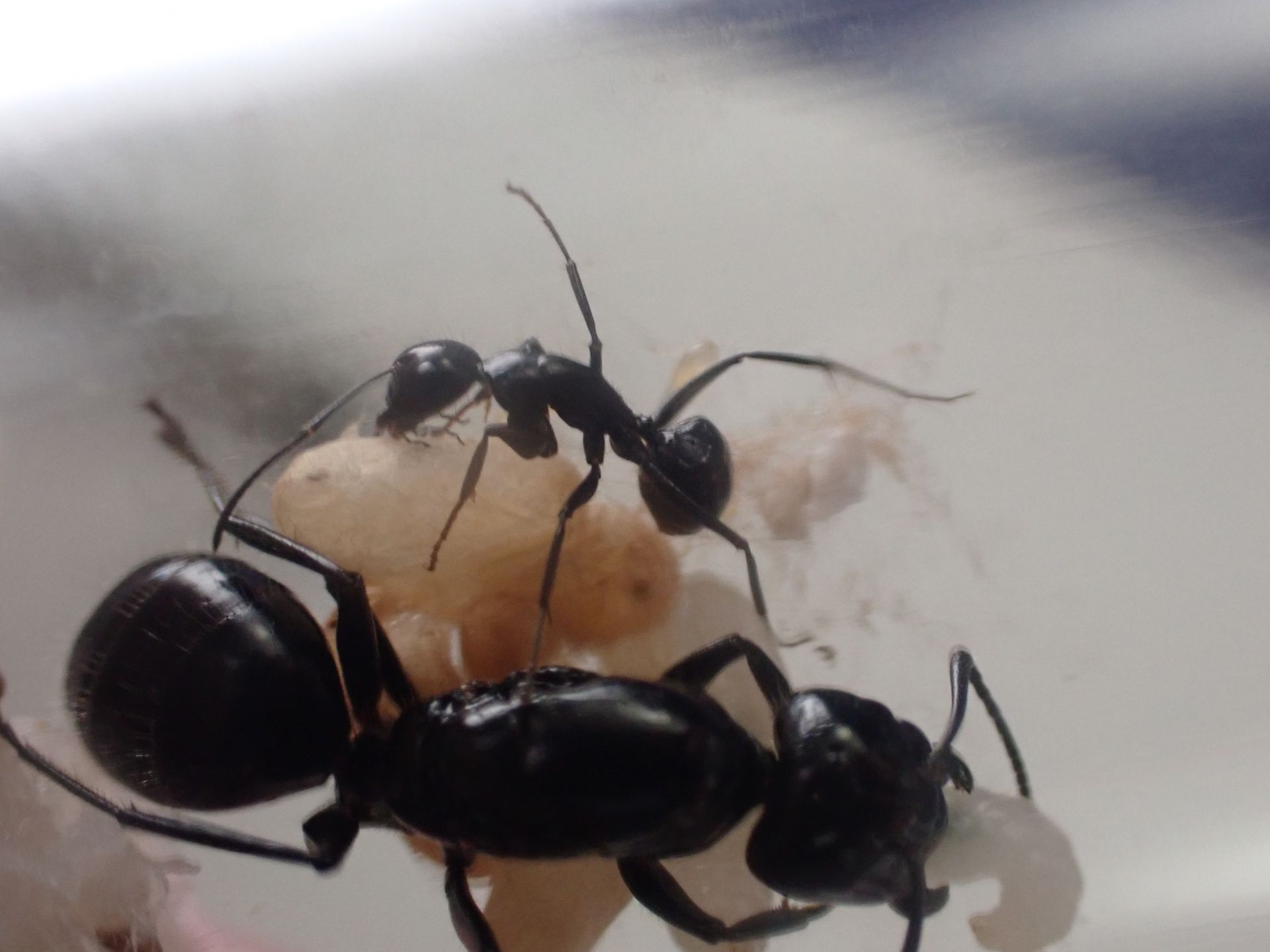 This colony will have overall more workers in the nanitic batch than colony 1, but they're still slower atm.
I tried feeding some fruit flies, since they already have workers, but they pretty much ignored them. I'm hoping they'll start eating once the colony is larger. At the moment, the only thing they do is freak out lmao.
Stuff for ID: 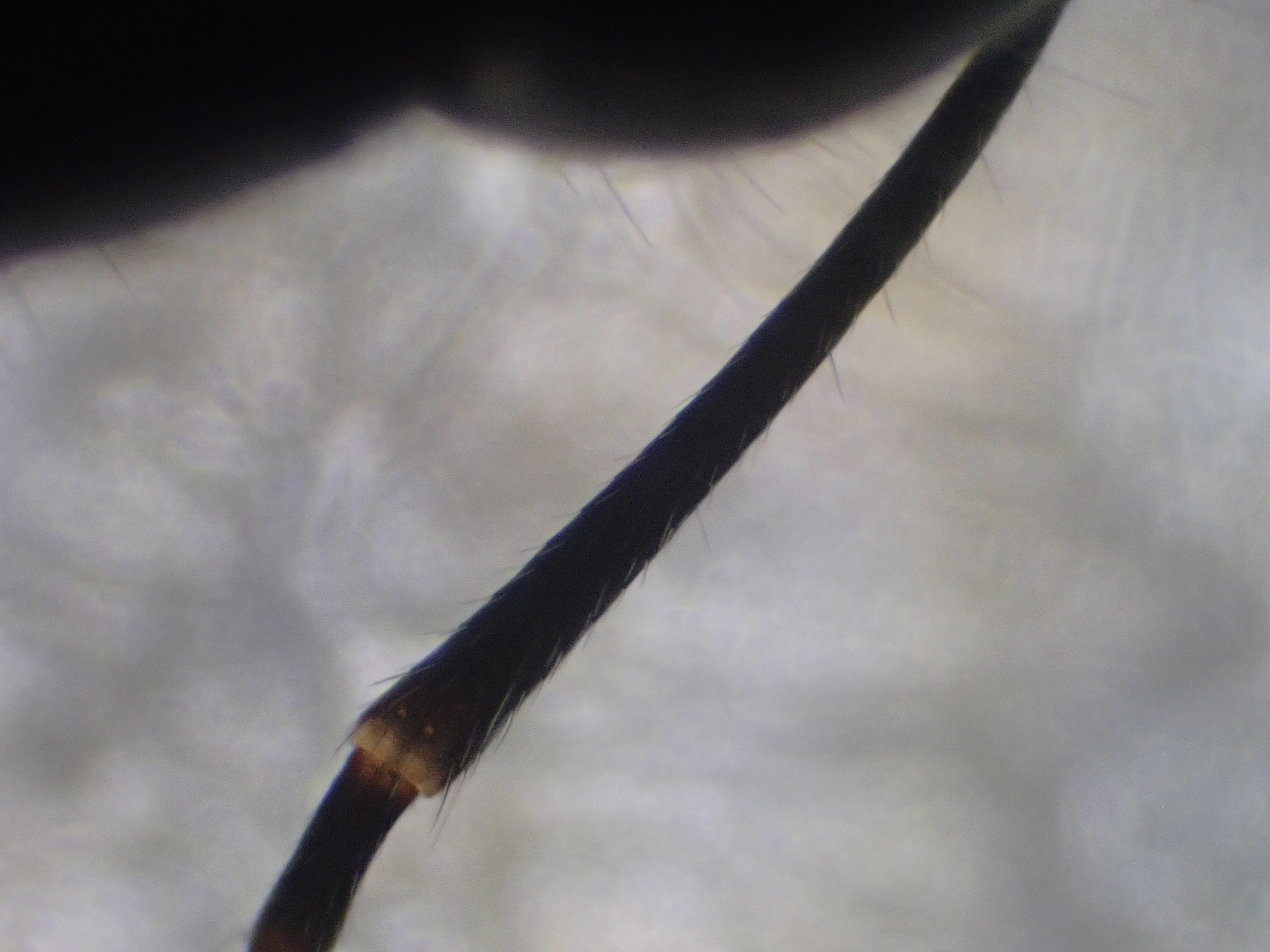 Lets pretend that my profile picture is not sideways.

Now, more than ever, we must remember that being a sheep, and not making a stand, only leads us to our doom. We must not just follow those who force their views upon others, by threatening to hurt. Stand up to them, and do not cower or grovel before them.

Antwiki isn't always the best place to look, but it cites a pretty reputable source. I don't have access to the book, but I doubt anyone would make this up.

The ID video and picture show the erect setae on the antennal scapes which laevigatus doesn't have. Even if I didn't have those pictures, I think it'd be pretty safe to assume that these are laevissimus, seeing as the characteristics for recognizing laevigatus for the past 160 years were actually the defining characteristics which distinguish laevissimus from laevigatus. I'm probably not doing a great job explaining, and the antwiki should help clear some stuff up.

Edit: this revelation was pretty new (from 2019), and it was only added to antwiki last month.

Lets pretend that my profile picture is not sideways.

Now, more than ever, we must remember that being a sheep, and not making a stand, only leads us to our doom. We must not just follow those who force their views upon others, by threatening to hurt. Stand up to them, and do not cower or grovel before them.

Yeah you probably couldn't have unless u either bought a $100 book or checked antwiki for laevigatus within the last 20 days.

In latin, the "-issimus" (like in Camponotus laevissimus) is what's called superlative (in the nominative masculine form), meaning that it is the best or most of something. For example, saying most powerful in latin would be fortissimus. Sorry for the latin insert… I just wanted to add in what caught my eye about this species name.

These look like shiny pennsylvanicus without the yellow hair.........

I was planning on making an earlier update, but after I had the message typed out, my computer spontaneously shut down, and I wasn't too eager to restart.

Both colonies now have 4 workers each. Colony 2 was actually going to have a fifth worker, but for some reason, it didn't eclose correctly, and they ended up dissecting her and sticking her remains on the cotton

I think it's cool that even though they have way less workers than my C. vicinus at the moment, they're also catching up pretty fast. I didn't expect them to already have this many eggs lain this early after getting workers. Most of my vicinus have much smaller brood piles. I guess this makes up for having later flights

I'll post an update when the 3rd colony's workers begin to eclose. The pupae look dark, so I'm hoping soon 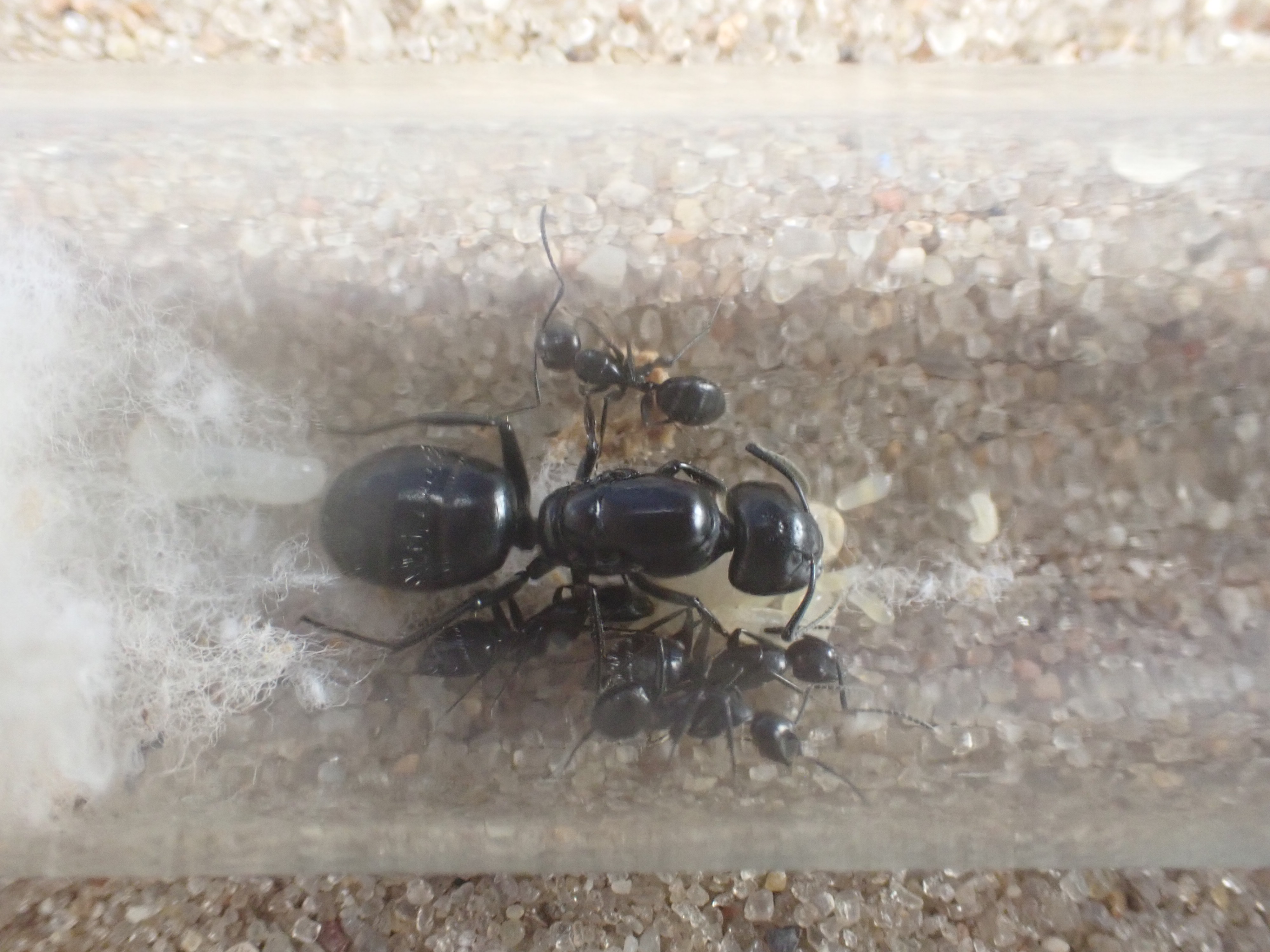 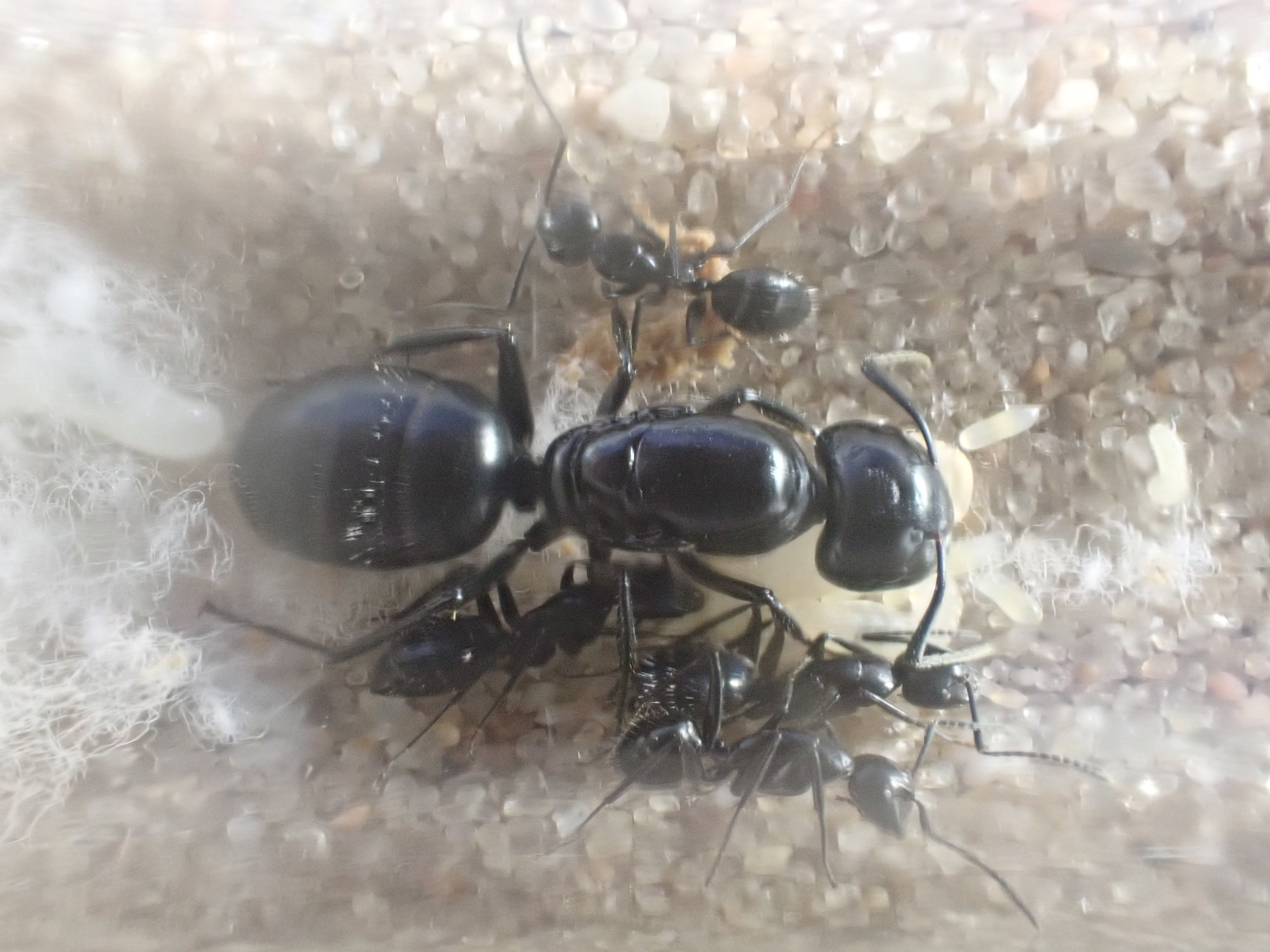 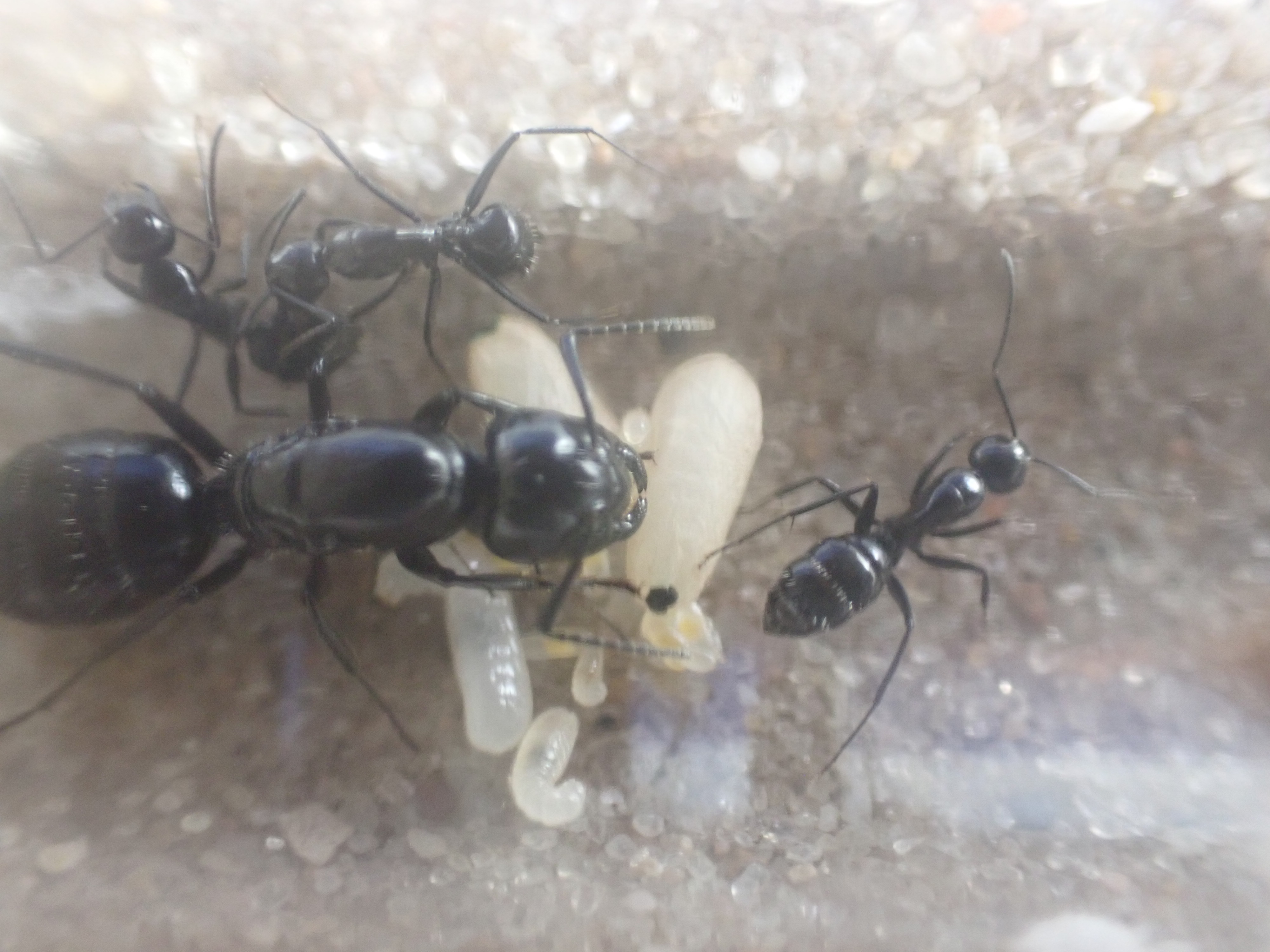 I fed them a few fruit flies a while back, but they didn't seem to want them. I'll try again tomorrow, and update on how it goes!

So I promised an update when colony 3 gets their workers. I checked on them today, and it looks like they're opening up their second pupa! This colony only had eggs when my other two already had pupae, and I thought it was infertile. I'm glad to see the colony is doing just as well.

All of the colonies now have around 4-5 workers, although the first two colonies have a lot more brood compared to the third one. They're growing really fast. I've recently noticed that they really LOVE roach legs. They also move super fast. I had 2 workers escape last night from two different colonies. I managed to get the first one back by patiently waiting, and I found the second one this morning crawling around. I almost didn't remember what colonies they each came from

As you can see from the pictures, I also moved them each into new 18mm tubes. However, my eagerness for getting good pics was short-lived, since they decided the sponges were way better than cotton and started to nest ON them instead of just next to them. The glass also got dirty really fast.

Colony 1 and colony 2 are probably both going to double in size in the next few weeks. I think it might be time to give them an outworld–escapees are not easy to deal with at all. 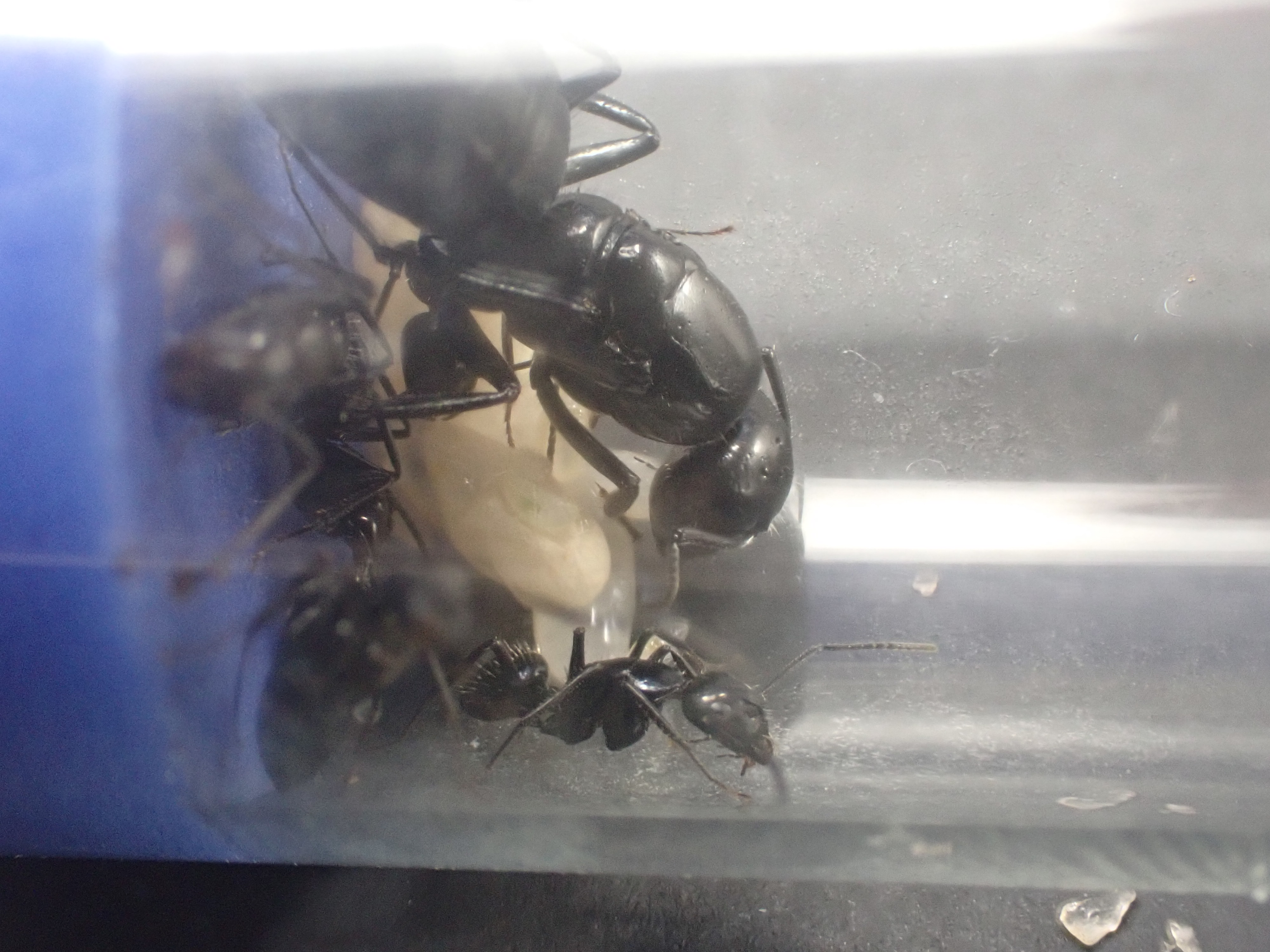 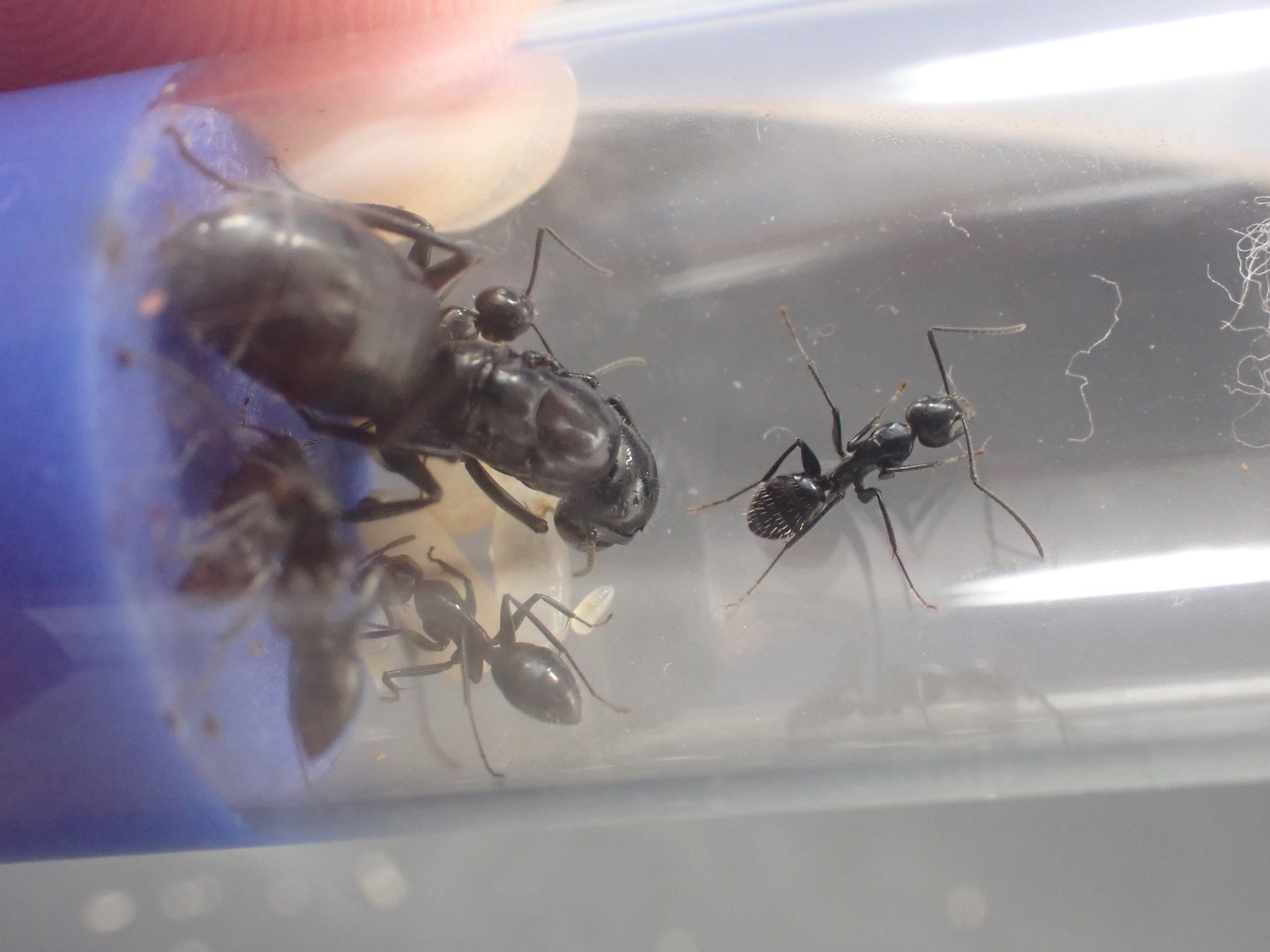 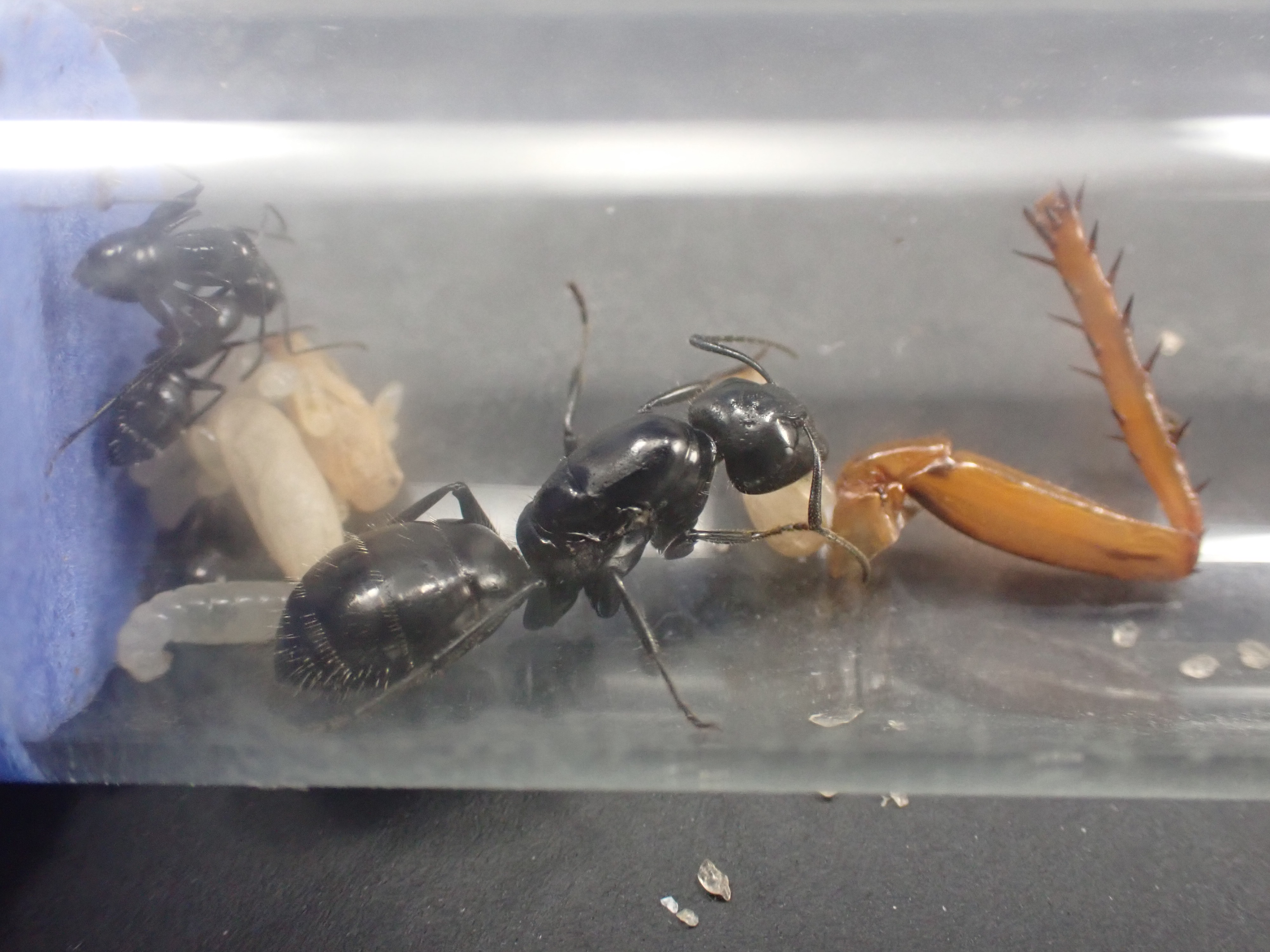 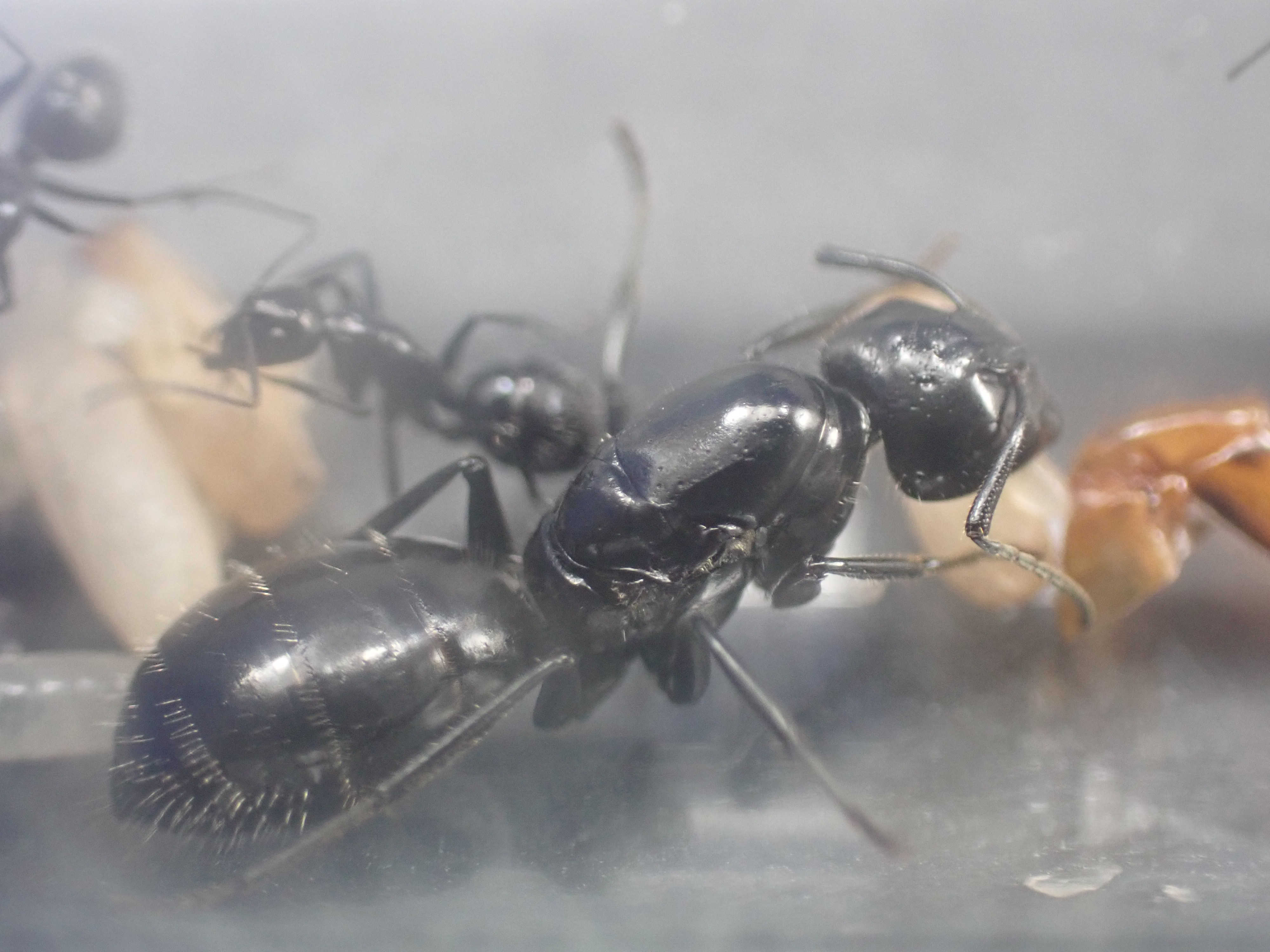 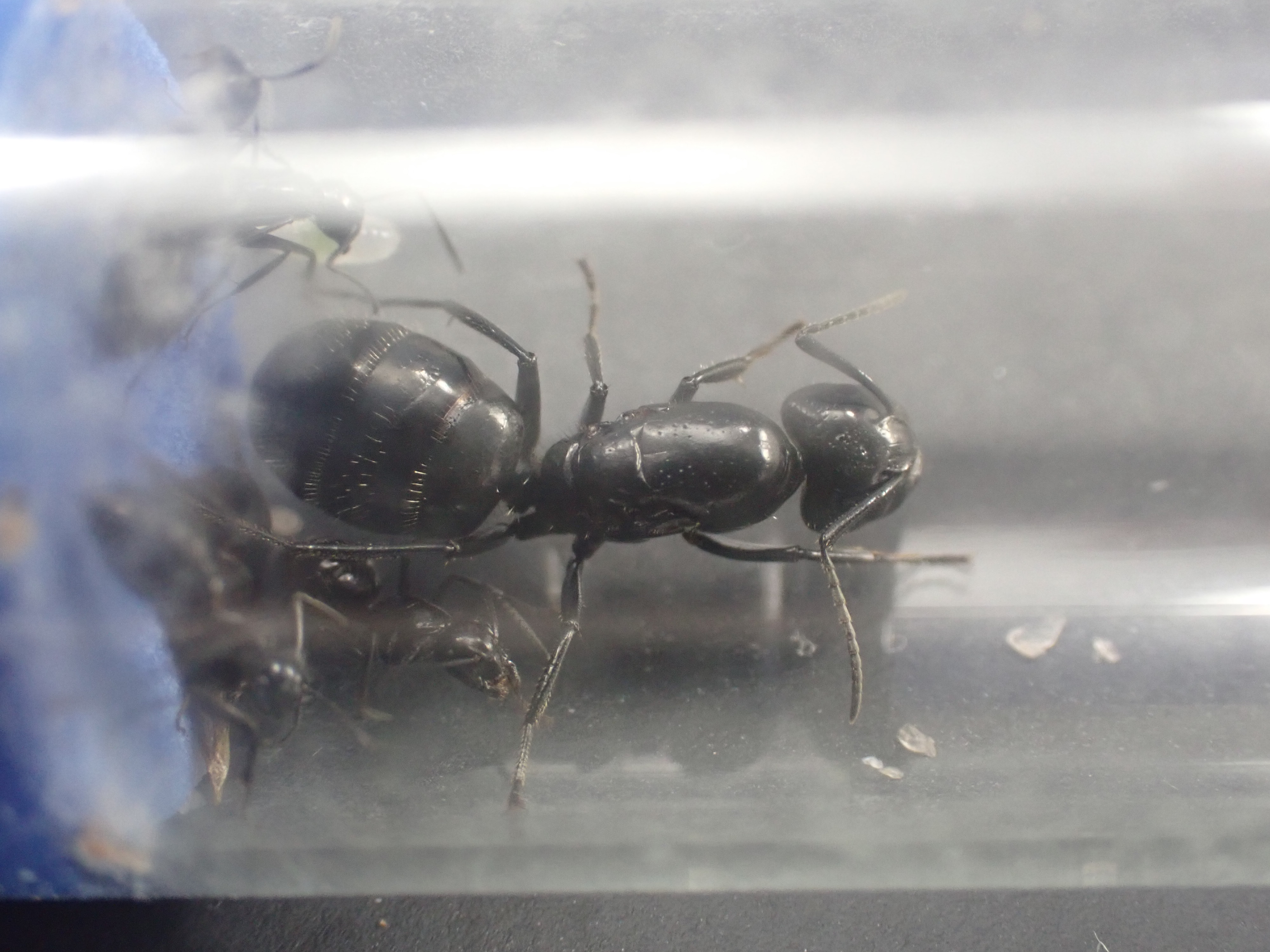 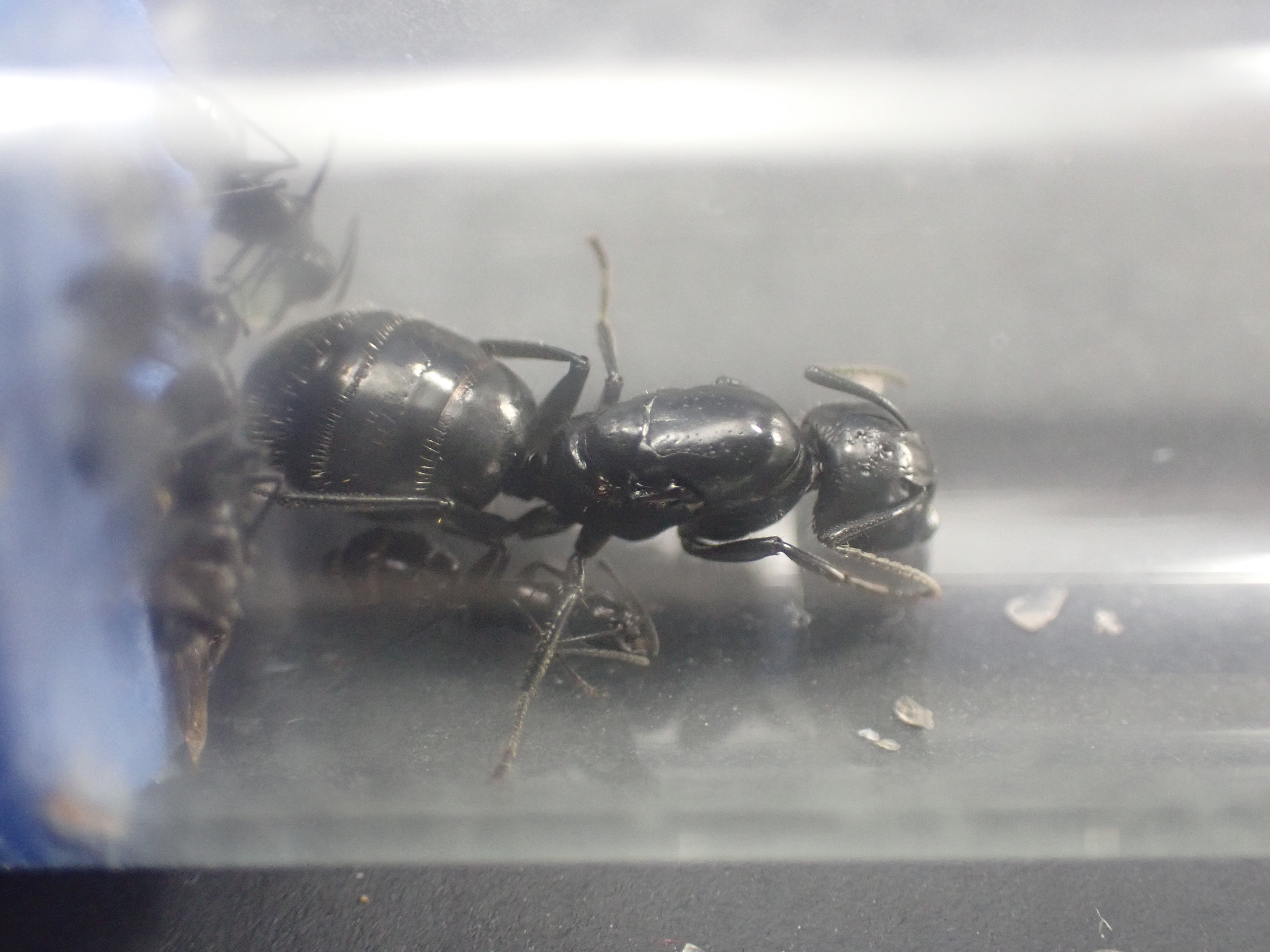 Also tagged with one or more of these keywords: camponotus, laevigatus, carpenter ant, ant, journal