Welcome to my first branch off my main journal, featuring my Camponotus colonies! As you may or may not know, I am dividing up my main journal, as my collection is growing to a point where combining all my colonies into a so called 'all inclusive' journal was getting too confusing for many to follow. If you want to follow these colonies' stories, Go Here.

So, two weeks ago today (Sunday, June 21st, 2020) I went anting in a local patch of woods in a park, which can be accessed through residential streets, sidewalks, etc. I usually ant in a little patch of woods with overgrown trails, where no one ever goes. The woods are light there, making navigation easy enough, yet it's dense enough so that forest dwelling ants love it there. So, I there I was, flipping over rocks, searching for any colonies underneath. I wasn't having much luck, as the only colony I had caught was a small Myrmica colony, who's container accidentally got knocked over after only fifteen minutes or so of possessing them, allowing the queen to escape. However, as I exited the woods, looking down into a small ravine (drainage system, with view of road and residential neighborhoods on the other side), I flipped over a rock, and Camponotus pennsylvanicus workers of all shapes and sizes came rushing out! I quick scooped them into a container, hoping the queen was there. Unfortunately she wasn't, and I was a little discouraged, thinking the queen was either deep underground, or that was a satellite nest. However, when I flipped over the rock adjacent to it, more workers were present, along with a very fat queen! I quick scooped up the queen into the container, and tried to catch as many workers as I could before heading home. Over all, I managed to get over 100 workers, a good percentage of the colony. I then placed them into a huge plastic storage bin, which I would have otherwise used as an outworld. I placed in some wood chips and cotton, and watered it every day or two. The setup is in my garage. It's temporary, as they have a THA 'Station' formicarium on the way. So then, much to my surprise, when I looked into their enclosure the next day, the queen had been busy laying eggs overnight! I counted around 50. Over the next few days, she laid somewhere between 100 and 200 eggs, which will double the population. As of now, the queen is skinnier than an unmated alate, and is taking an egg laying break. However, the eggs have been hatching into small larvae in the past couple days! They are hardly distinguishable from eggs, yet some have tiny larva-like heads. A couple days ago I also gave them a test tube, which they partially moved into. 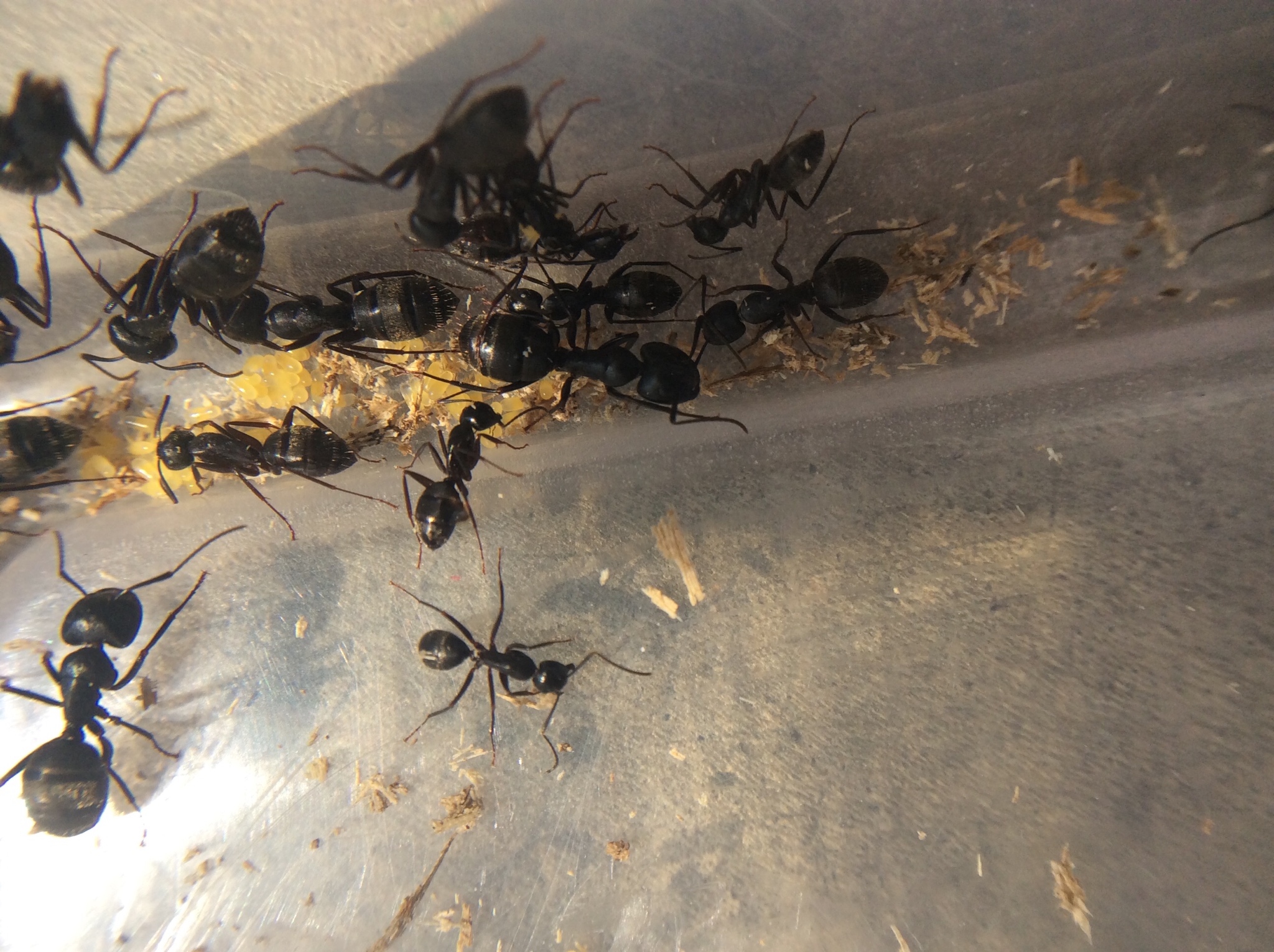 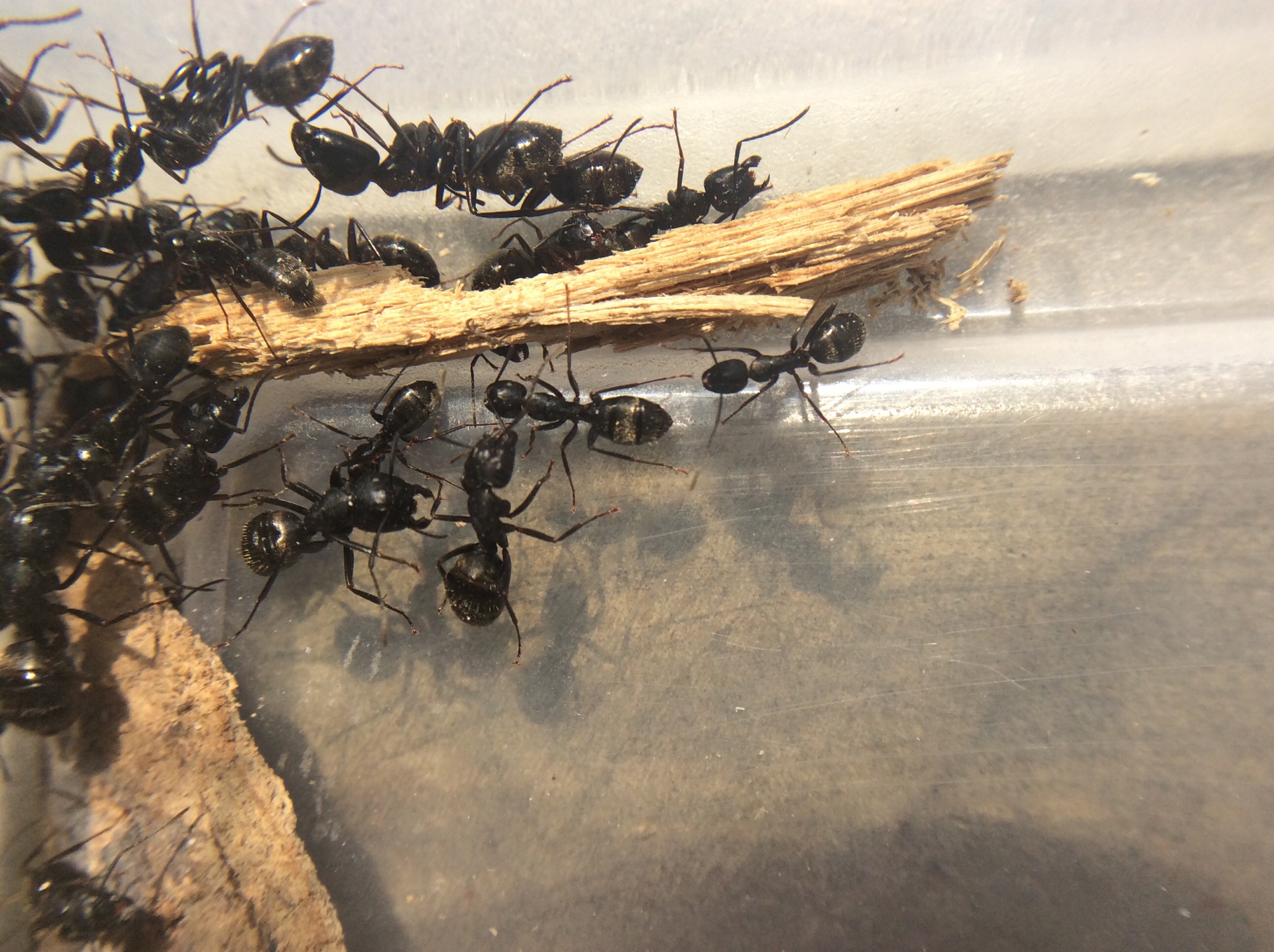 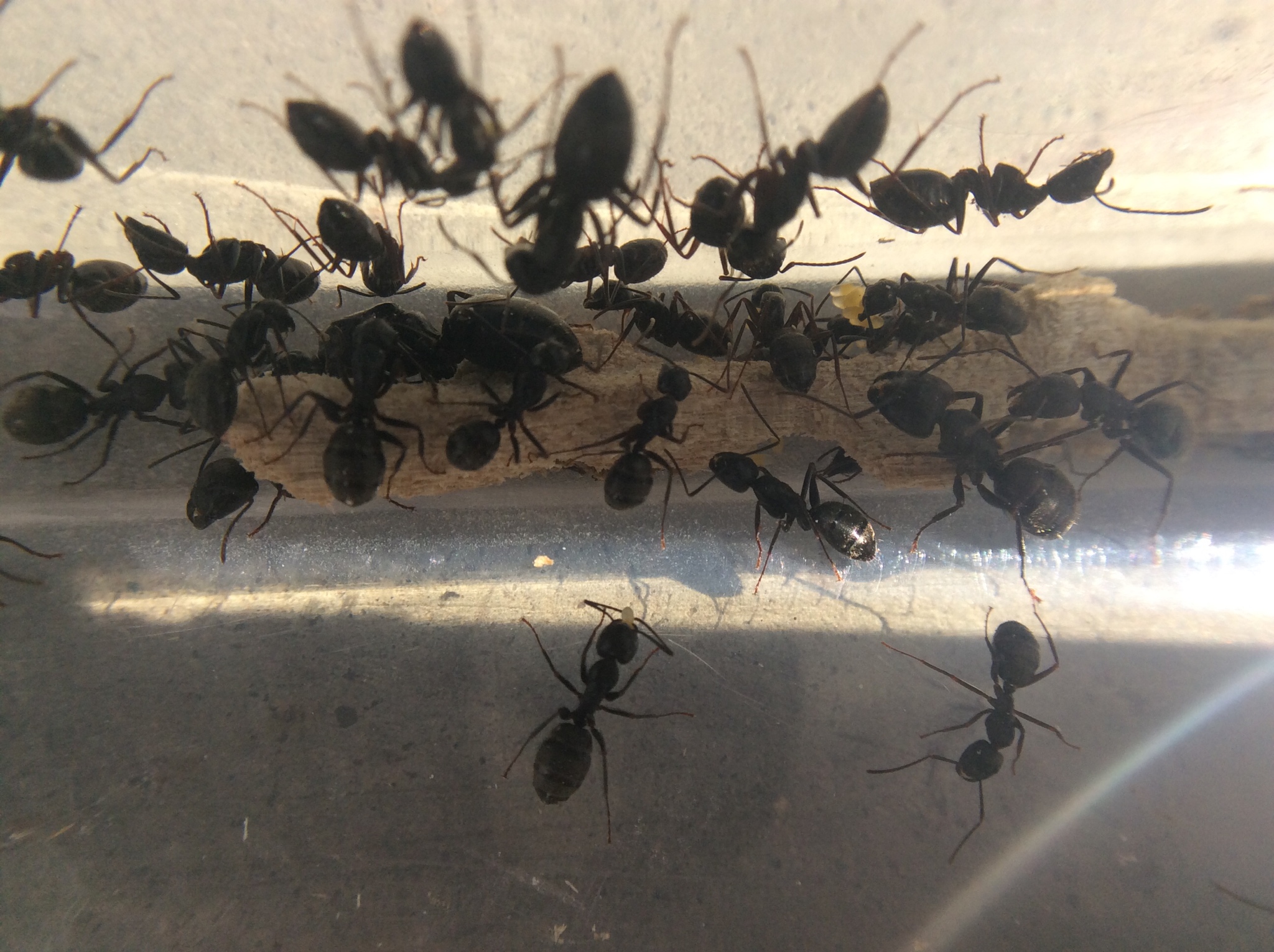 That same day, a Camponotus pennsylvanicus alate landed on my deck. I immediately made a test tube setup for her. For the first few days, she just sat at the end of the tube, doing absolutely nothing. I assumed she was an unmated dud. She didn't even bother to drop her wings! However, one day, I peeked in, to see that she had both dropped her wings AND laid a couple eggs! Over the next week, she laid close to 15 eggs! She is the most productive queen of this species I have ever seen both in my experience and online. But since I already have a large colony of this species, I may give her away if I manage to bring someone into the hobby. But I will be keeping her for a long, long time yet, so I figured I might as well include her!

The queen had just recently began her egg laying spree. As previously mentioned, she has 15ish eggs at the moment, while in the photo she still only had 4. (This is probably the best photo I've ever taken of an ant, by the way) 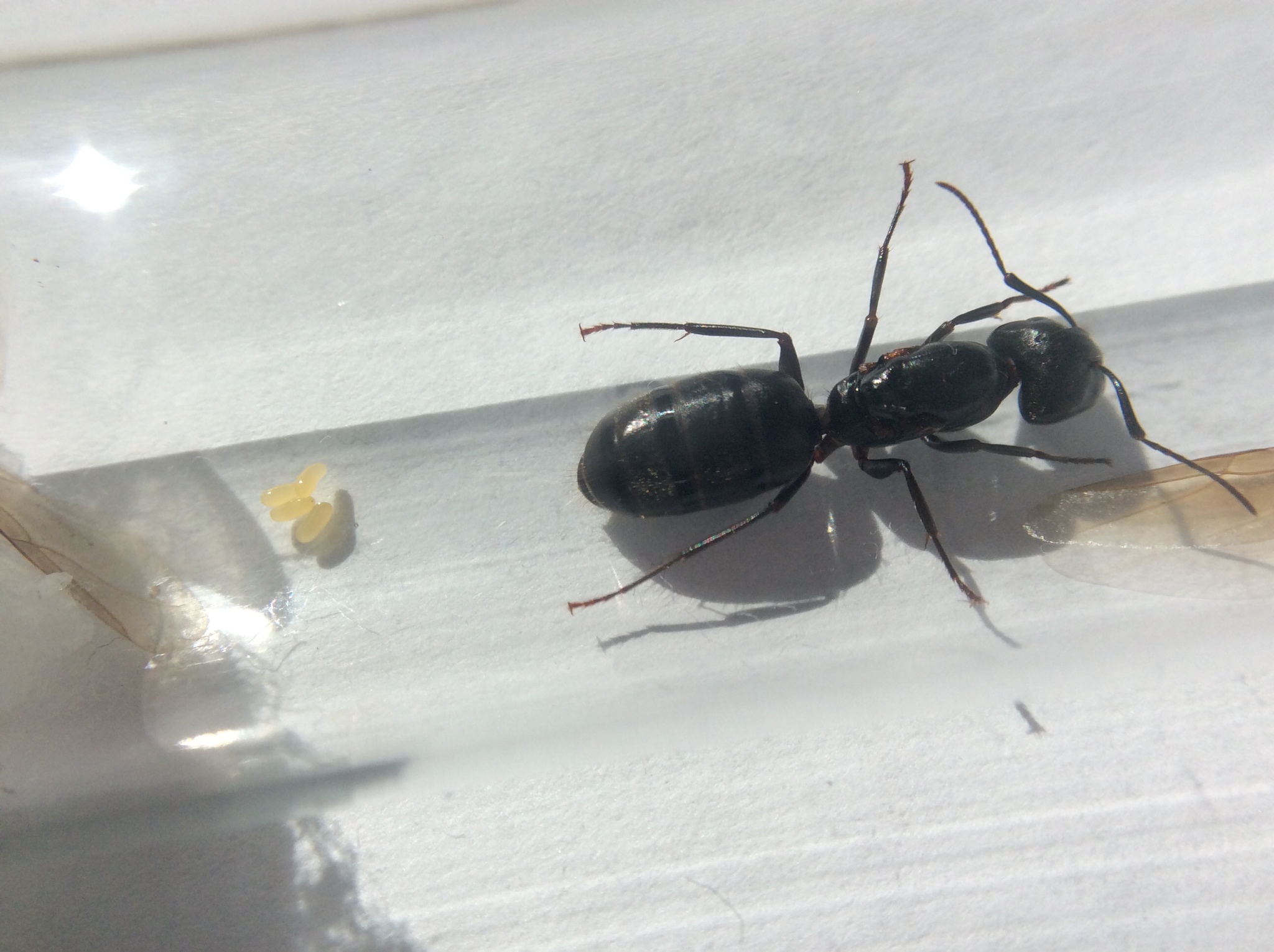 Ants_Dakota recently went on vacation to South Dakota's Black Hills, which is probably the most diverse area ant wise in the state. He caught many queens and colonies, mostly Camponotus. So, I managed to get my hands on the two vicinus queens he caught while flipping over rocks (they were caught under different rocks at different times). I told him to put them together, as I've always wanted a polygynous colony of this species. It was an experiment, testing to see whether our variety are polygynous. Well, it turns out they are! They huddled together and groomed each other in their collection container, and showed/continue to show great affection toward one another. I like this particular pair, as they slightly vary in size and color, making them easy to tell apart. Queen 1 is slightly larger and bulkier, and has a stunning, metallic orange/red color at the tip of her gaster, and over some of her thorax. Queen 2 is a bit smaller, and has that same orange/red, but only on the thorax, and in lesser quantity. So, as of now, the pair is in a tight competition with my pennsylvanicus queen in terms of number of eggs. They also have around 15. However, their eggs are slightly larger and noticeably rounder and a slightly different color than other Camponotus. I believe they are in subgenus Tanaemyrmex, correct me if I'm wrong, so that's probably why. My other Camponotus are in the subgenus Camponotus. 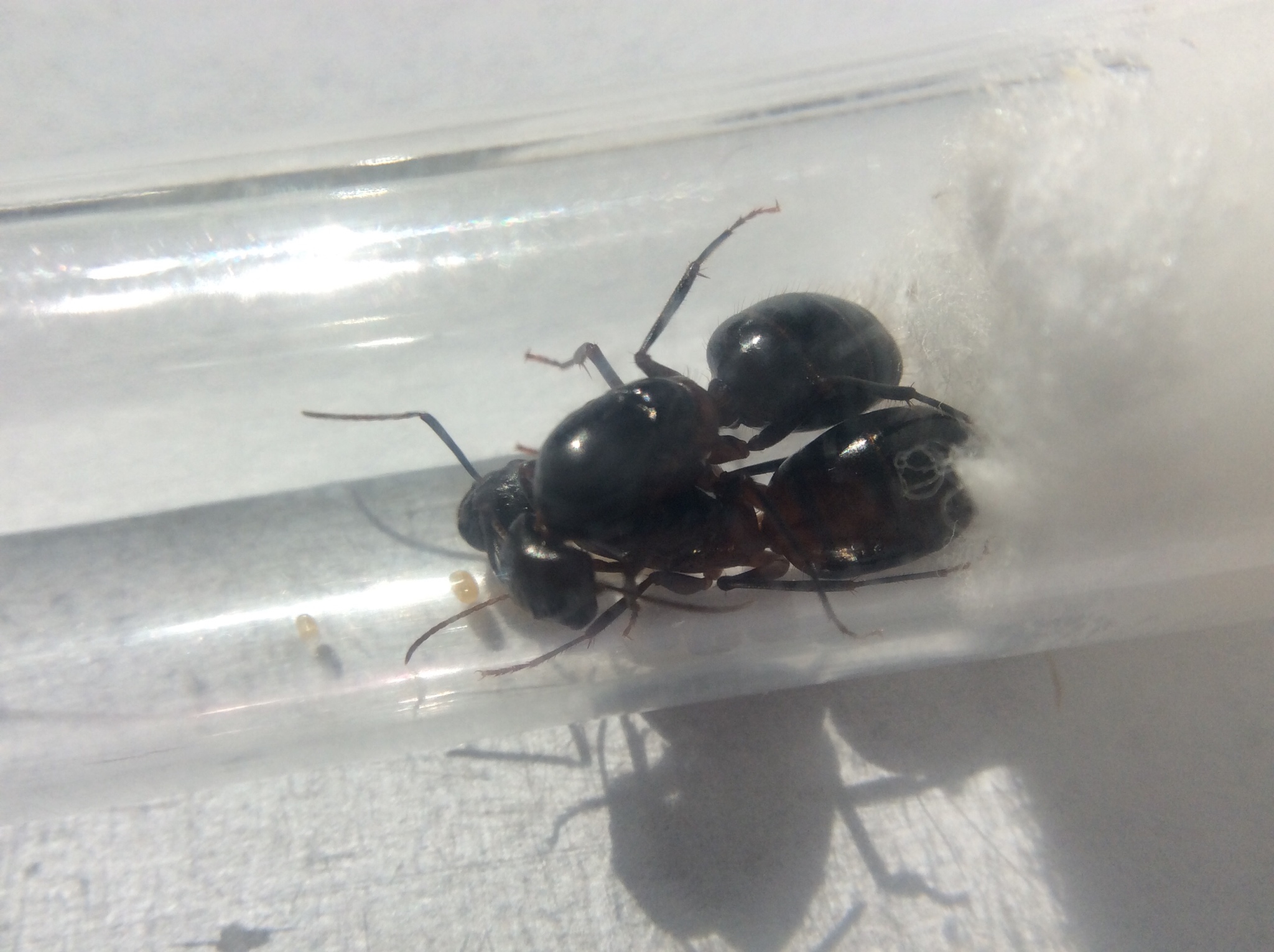 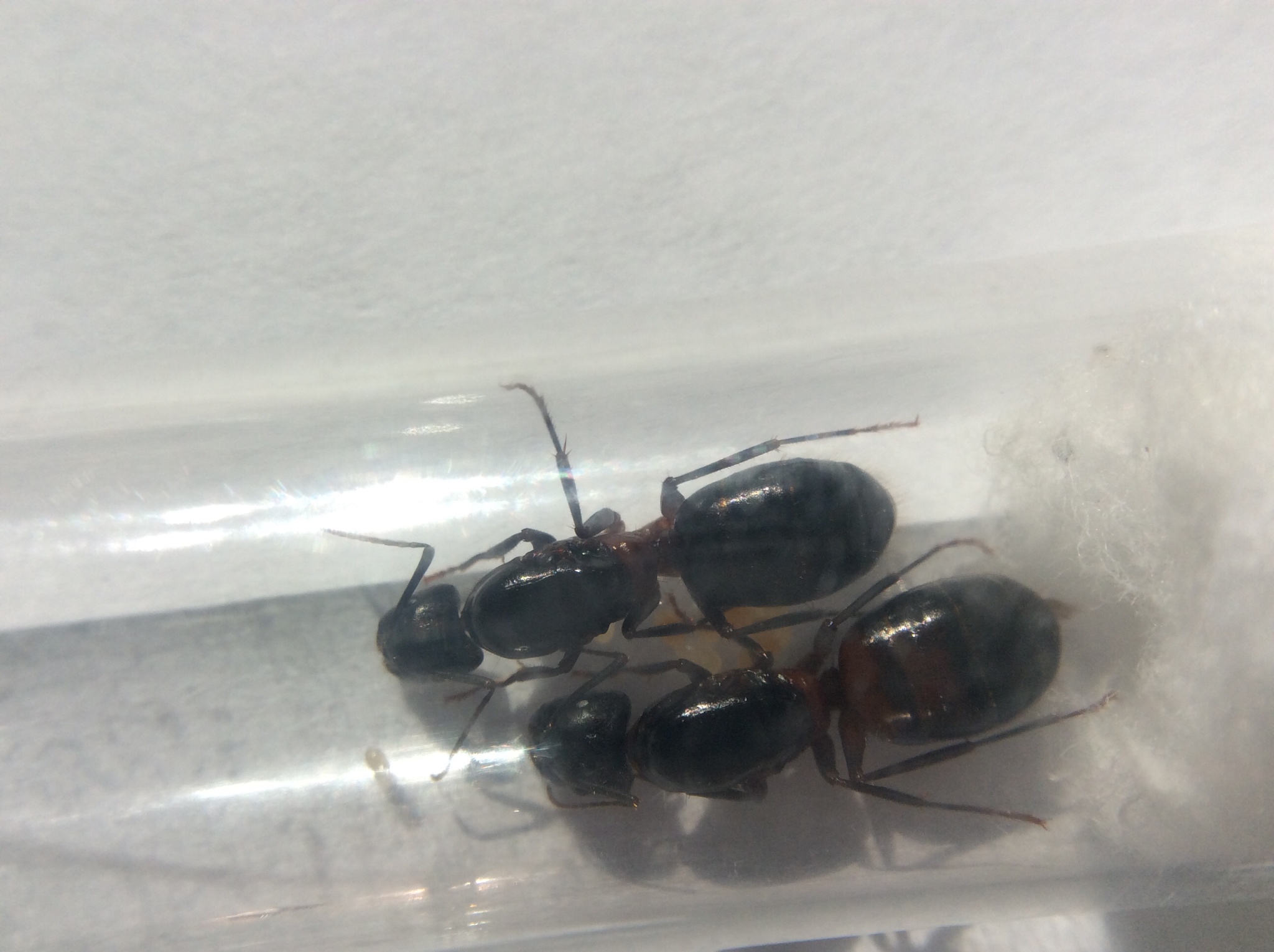 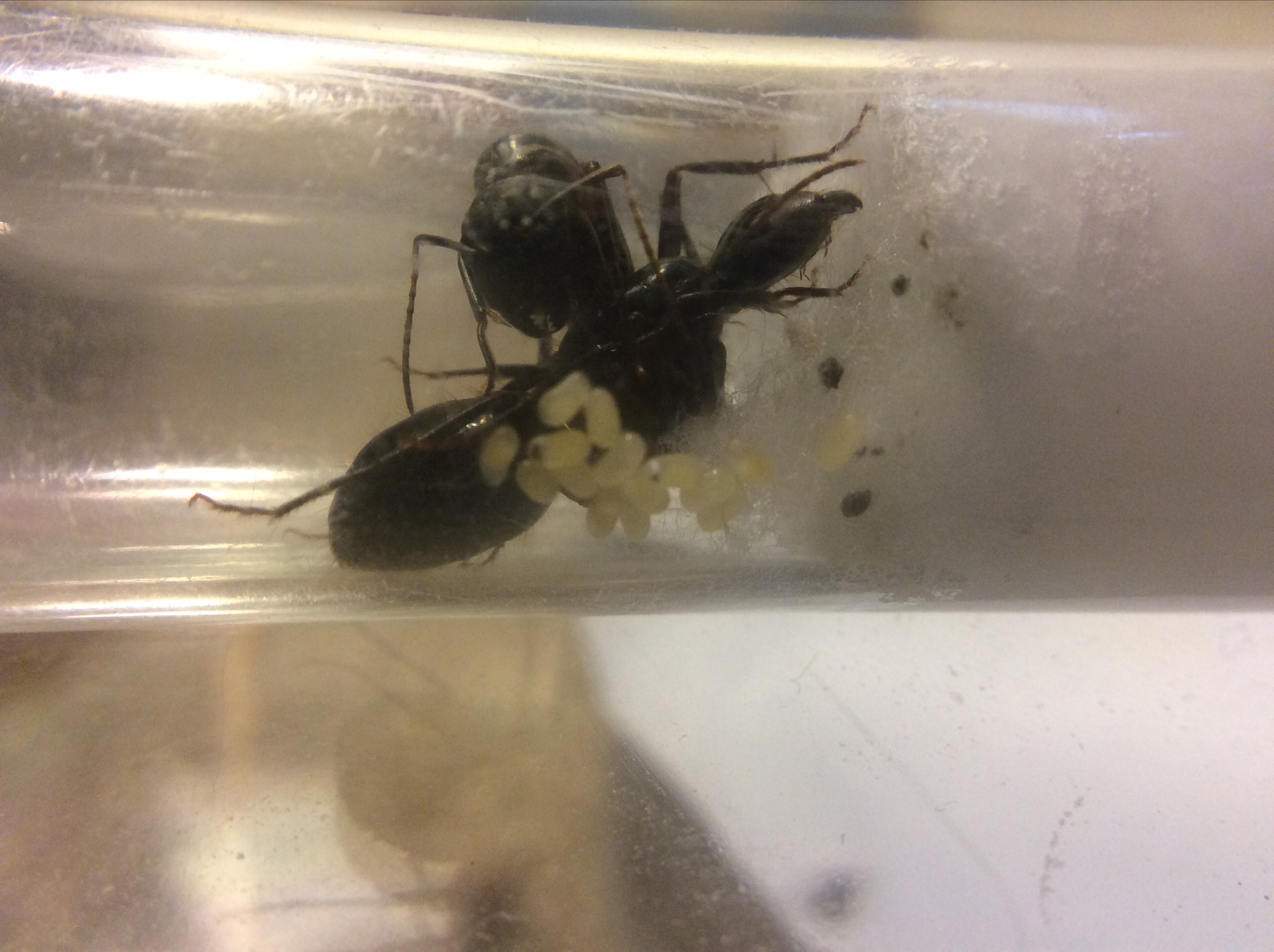 Ants_Dakota caught three of these in the Black Hills. He kept two and sold one to me. She currently has 7 eggs. I heard somewhere once that this species grows slightly faster than pennsylvanicus? I'm excited for this queen, if so. 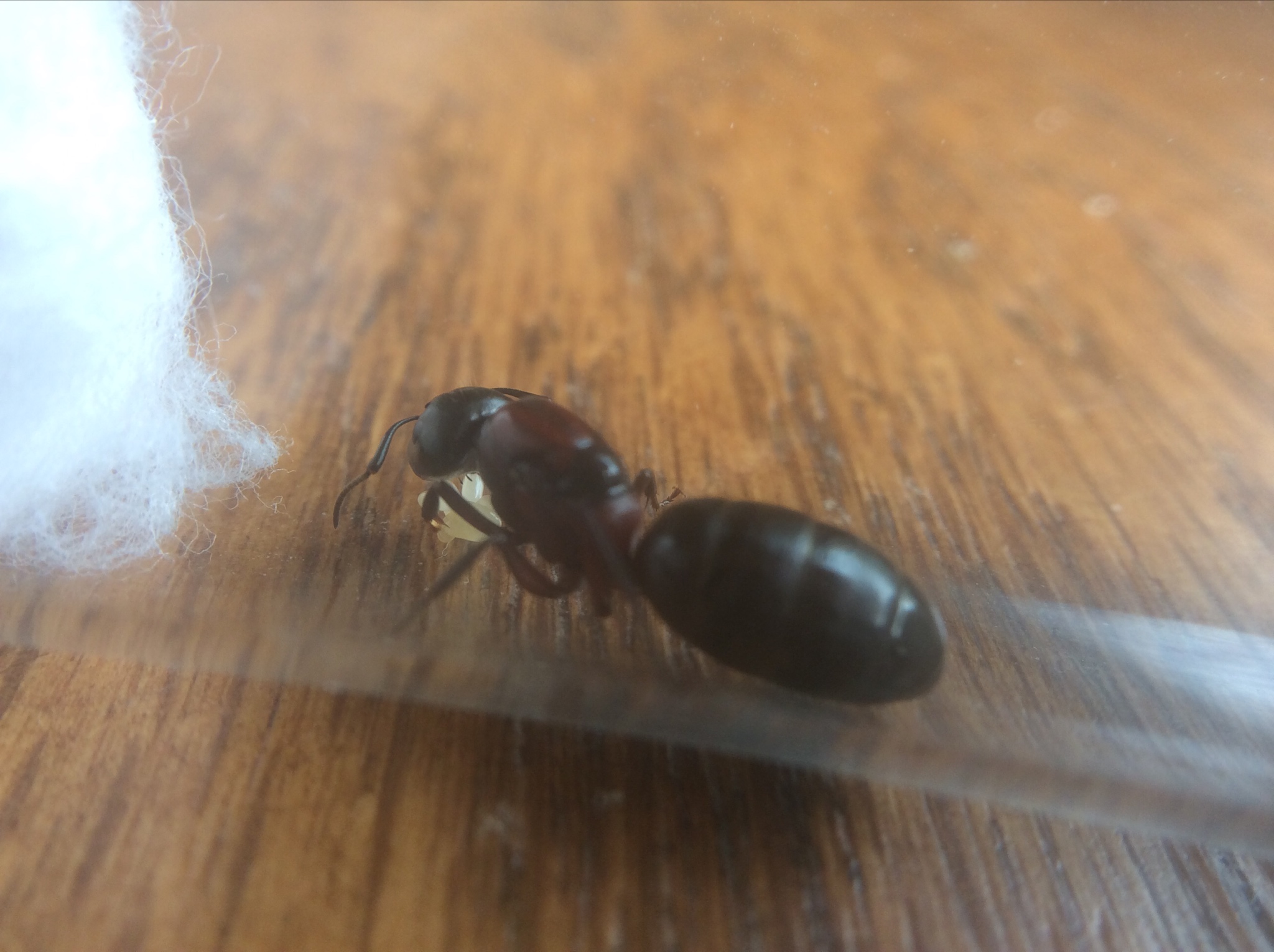 This is where any other information partially or fully relevant to this journal but not relevant to any specific colony in this journal will be posted. There are no additional notes for this update.

“A Camponotus pennsylvanicus alate landed on my deck“

You find elates everywhere... Here I am finding nothing but Argentines on my anting trips..

“A Camponotus pennsylvanicus alate landed on my deck“
You find elates everywhere... Here I am finding nothing but Argentines on my anting trips..

Well, it’s much harder to find alates here than other places. I’d much rather find Pogonomyrmex or Trachymrmex, Odontomachus, what have you.

“A Camponotus pennsylvanicus alate landed on my deck“
You find elates everywhere... Here I am finding nothing but Argentines on my anting trips..

Well, it’s much harder to find alates here than other places. I’d much rather find Pogonomyrmex or Trachymrmex, Odontomachus, what have you.

Cali ain’t as easy as that, you rarely find those when you live in Argentine Land, where I am...

The only way I can find not-Argentines is a at LEAST hour drive out from my place.

Well, I have some sad news for both colonies. So, as I mentioned in the previous update, I was awaiting a THA 'Station', in which I planned to move the colony. However, that arrived only a week ago, much longer than I had anticipated. It turns out that the baby powder barrier around their temporary enclosure weakened, allowing workers to cross it and squeeze past the lid, and were exploring my ant cabinet in my garage. They then moved all the brood (they had larvae at this point) and over half the worker force out to God knows where. I attempted to fix this problem by moving them into another temporary container. However I failed miserably when I plugged a hole meant for a tube (it used to be an outworld) with clay. I failed to anticipate that they could of course chew right through the clay, and then the entire colony escaped. I attempted to search for them, even convincing my dad to open a tiny section of wall in the garage on the basis of me potentially preventing a carpenter ant infestation. There was nothing there, unfortunately, and I haven't seen the colony since.

So, my only comfort to the loss of Colony A was Colony B, which was just a queen. I actually did manage to capture a few workers from Colony A after they escaped and attempted to introduce them to the queen. She killed all but one, but I suppose one is better than none, right? Well, I continued to feed her and her worker, and eventually, after an abnormal amount of time, an egg hatched. Then the worker died, and the test tube flooded. All brood was lost. Then I moved the queen into a new test tube, but she never recovered, and died a couple weeks ago.

Turns out these queens ended up eating most of their eggs, with only 3 making it to mature brood. Fortunately, however, one of those three eclosed a couple weeks ago! Though I am baffled as to why the other two do not develop. They are mature larvae, yet need to grow a little more before pupating. They won't pupate and won't grow, yet I feed them and they're kept warm. Not sure what that's all about. But anyways, I ordered a Mini Hearth with the Station. I selected the vicinus colony to inhabit it. I moved them in the day I received the formicariums. Also it should be noted that Mac was kind enough to add museum glass to make up for the 8 week wait. What an amazing guy.

I still really love THA formicariums, and apparently the vicinus do as well. The queens decided to lay shortly after I moved them in! I count around a dozen eggs, and the queens are both filled with food, as is the worker. 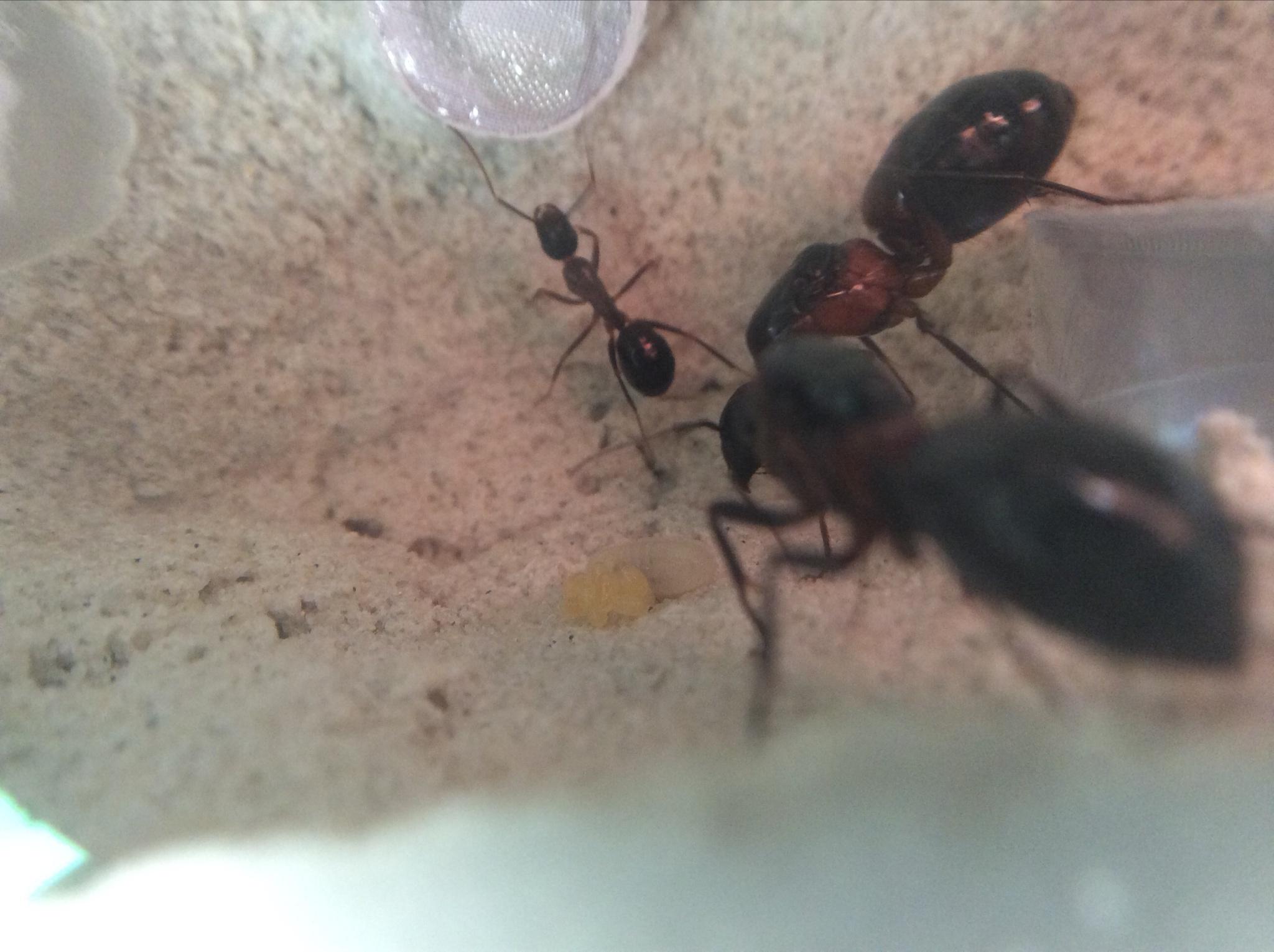 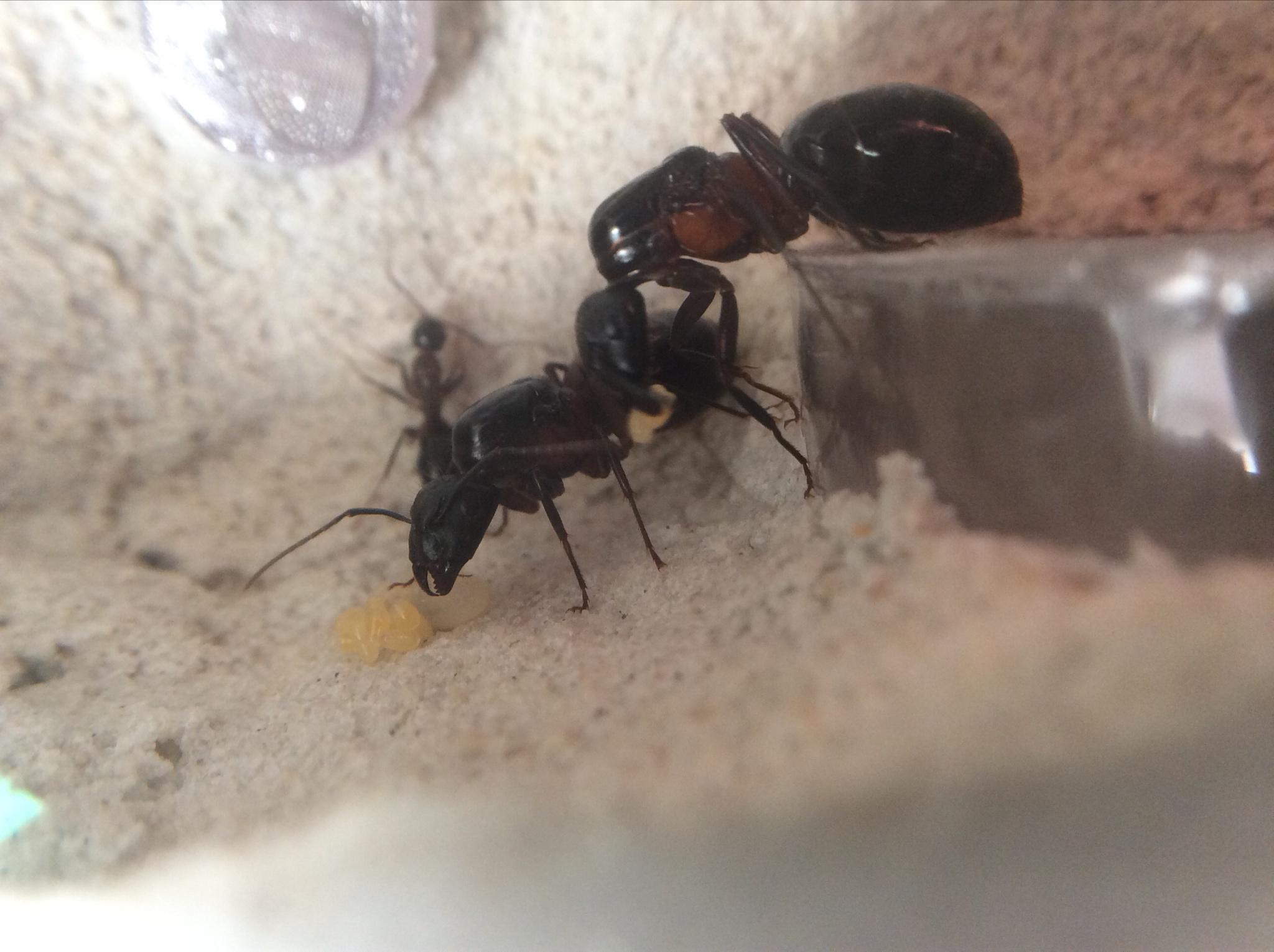 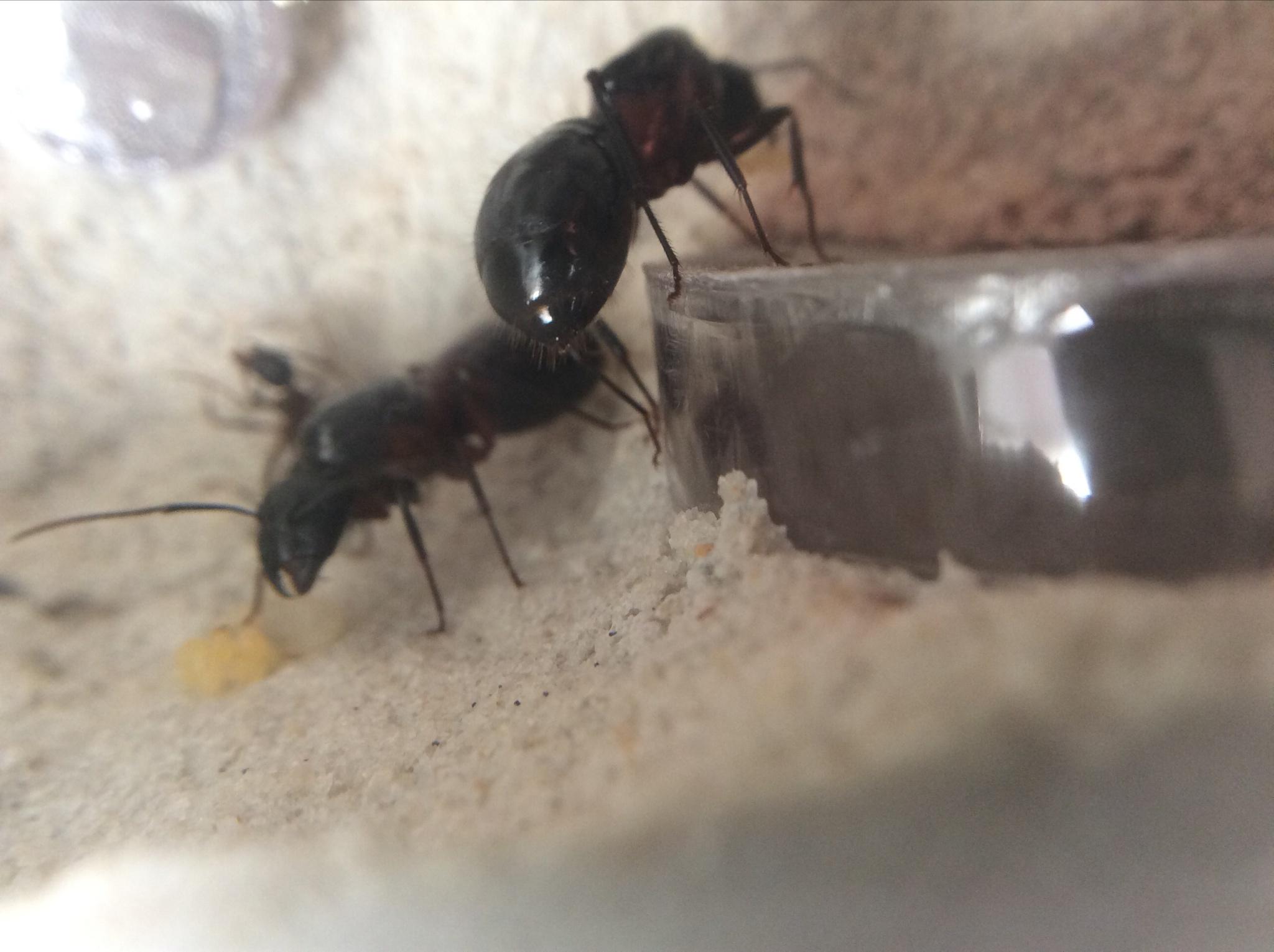 Also, here is a video of the colony.

This queen received her first couple of nanitics around the same time the vicinus did. Since then she has laid a dozen or so eggs, which have recently all hatched into larvae. 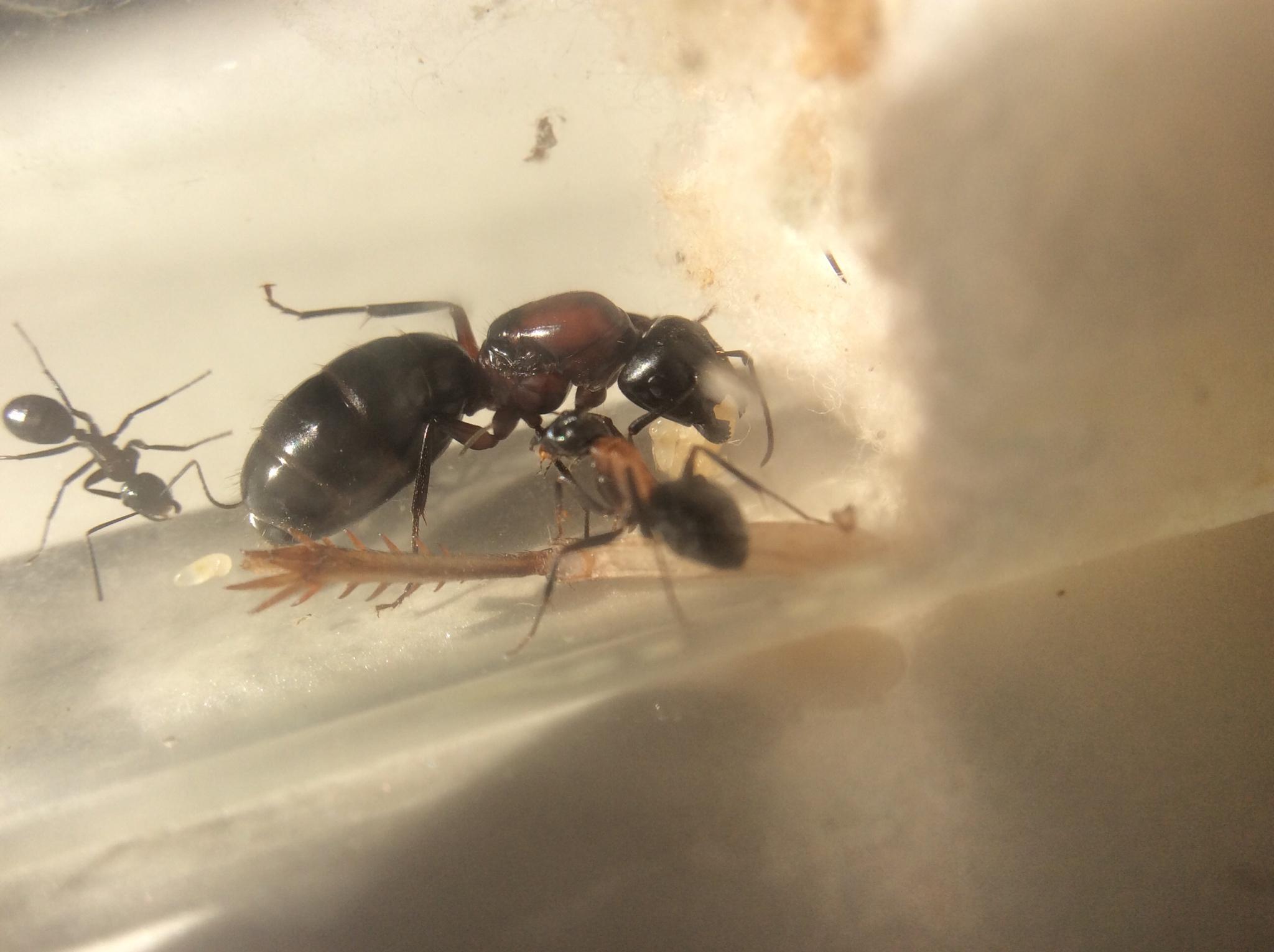 In a few weeks from now, I will have a pleasant surprise for you all, that will include but not be limited to this journal! (It does involve the Station I ordered.)