Earlier this year I accquired two Crematogaster queens. In the beggining it was really rough, as the queens only had 1-2 workers and no brood and the workers were dying left and right. One of the queens however laid lots of eggs and brood while the other would occasionally lay eggs, but later eat them. The queen with lots of brood mysteriously died one day(most likely due to me not realizing that the water in the test tube ran out

). The brood that the queen had produced, I gave to the other queen hoping that she would adopt the brood.and raise up some workers. At this time all her workers had died and I was uncertain about her survival. The queen proceded to eat all the brood but 2 pupae, which would later eclose into adult workers.

Now the colony has around 70 workers and about 100+ pieces of brood, with about 3-4 new worker eclosing everyday. The colony eats almost anything I give them; freeze dried crickets, Dubia roaches, and even bluegrass seeds. Because my species of Crematogaster is from the desert, they love their heat. I current have them in a home-made incubator setup, with a constant temperature at around 86-90 degrees. They are housed in a size two Antkit acrylic nest connect to a simple Tarheel Ants outworld.

Also if anybody knows what exact species this may be, let me know, I would greatly appreciate it. (Only thing I know is that they are from Southern California) 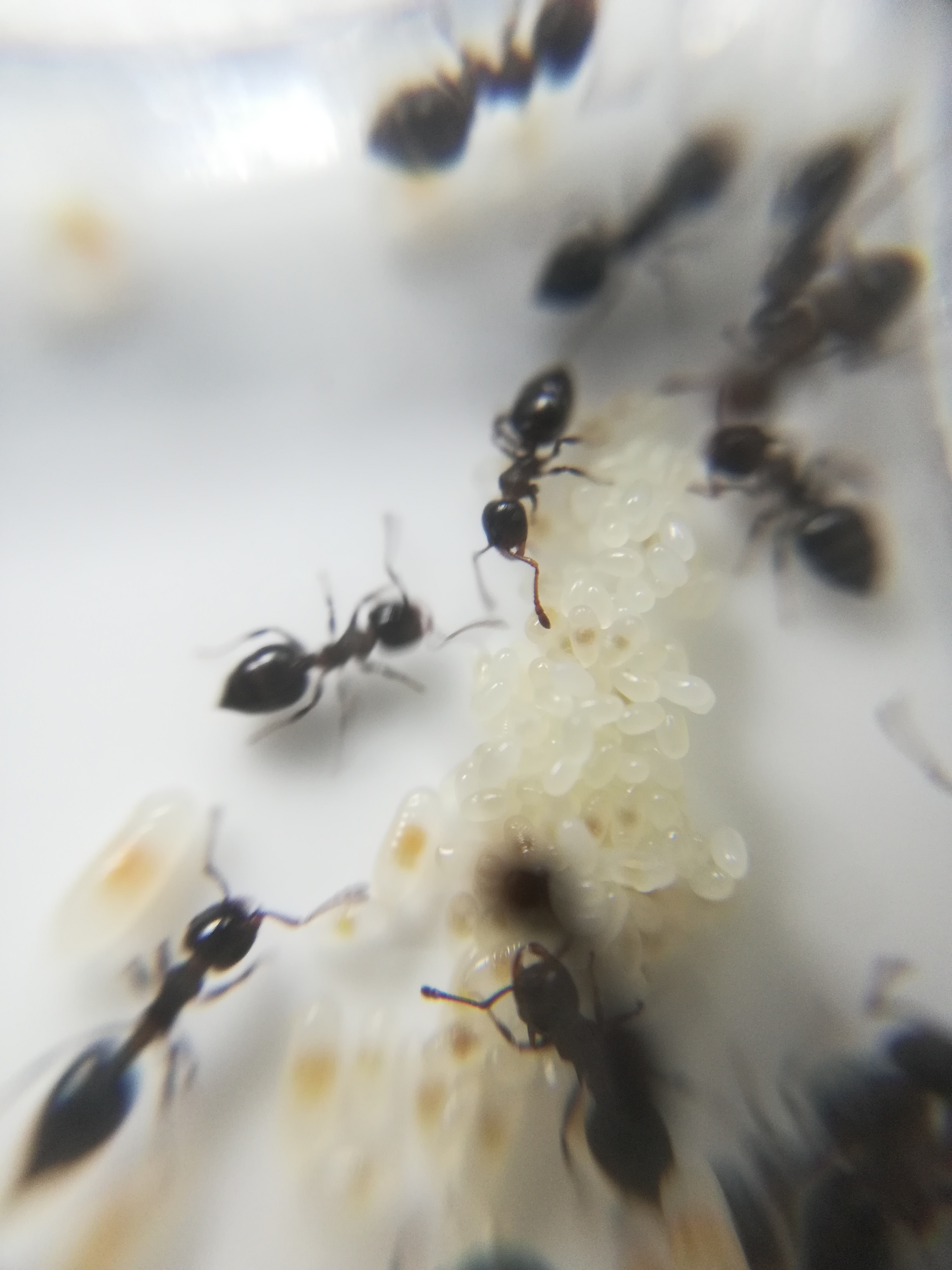 Zoomed Out View of Brood: 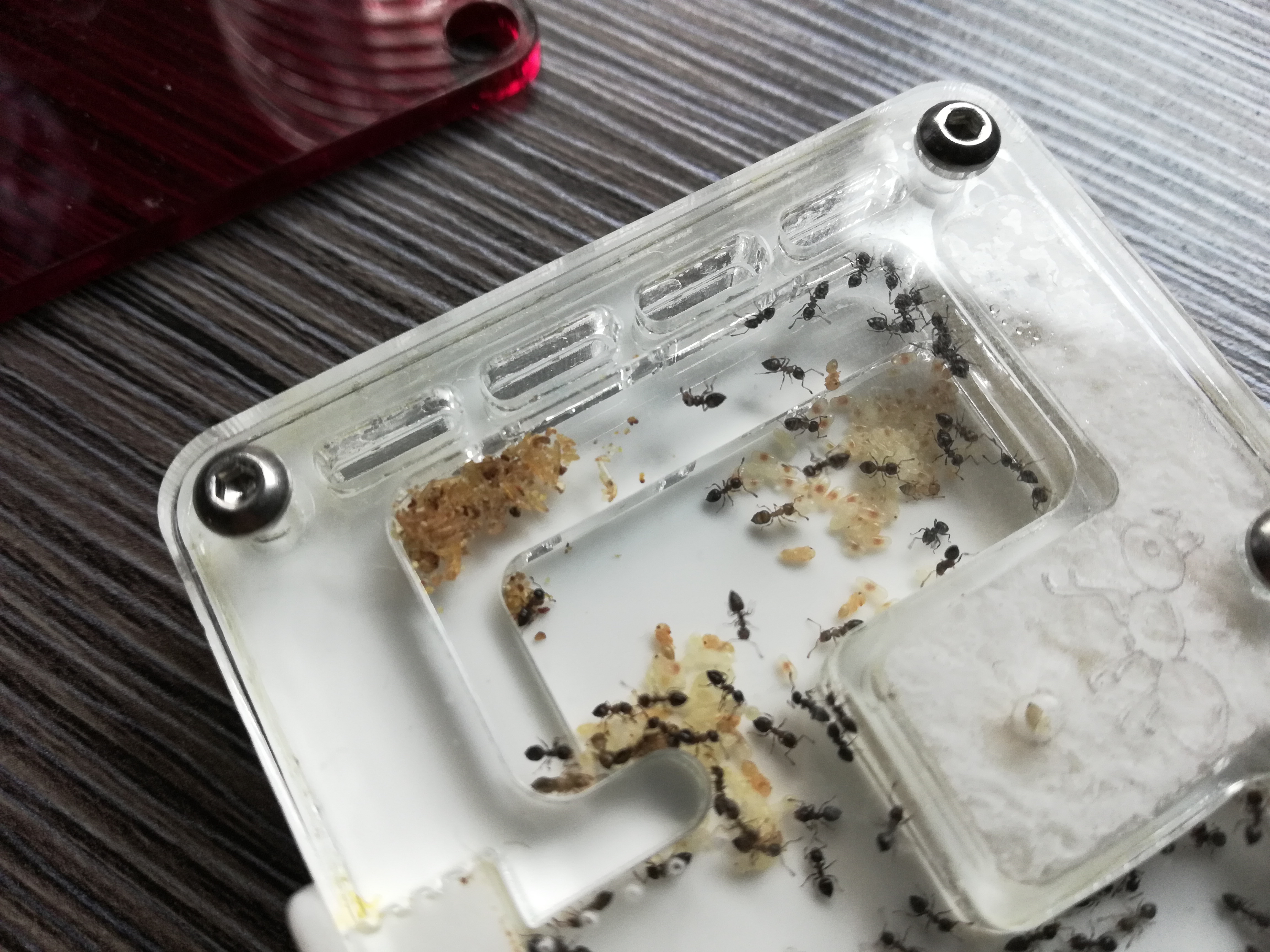 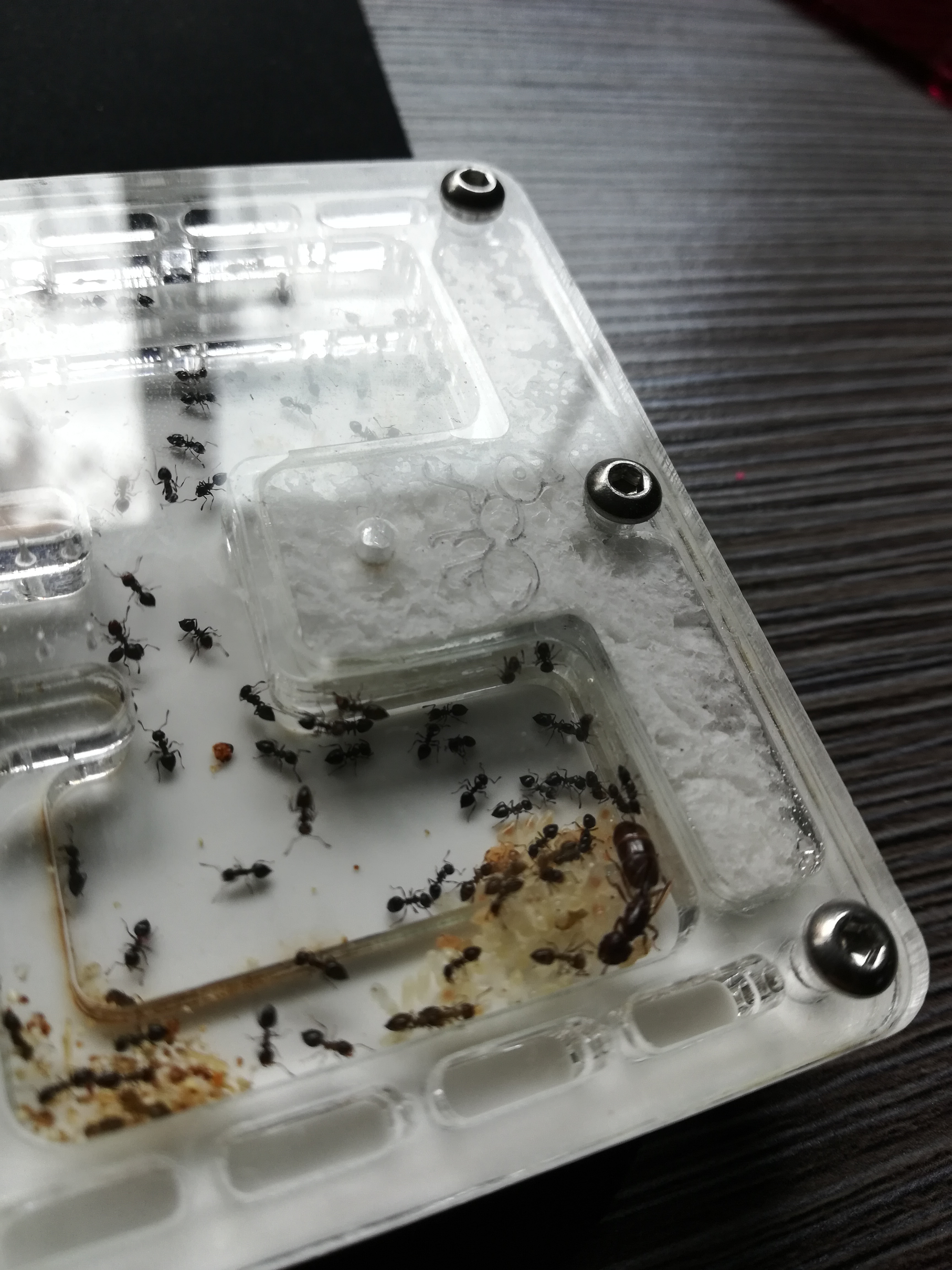 Closeups of the Queen: 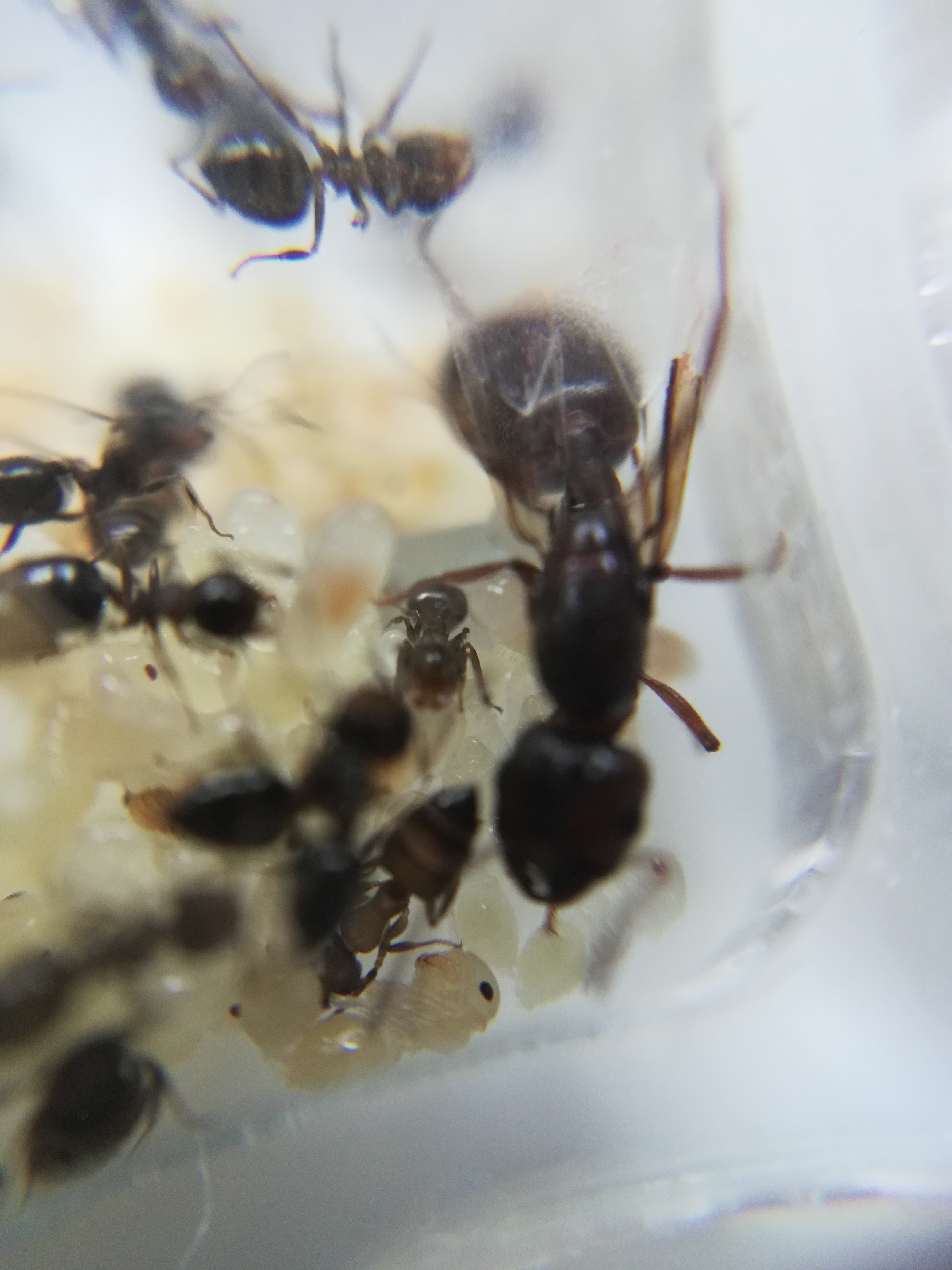 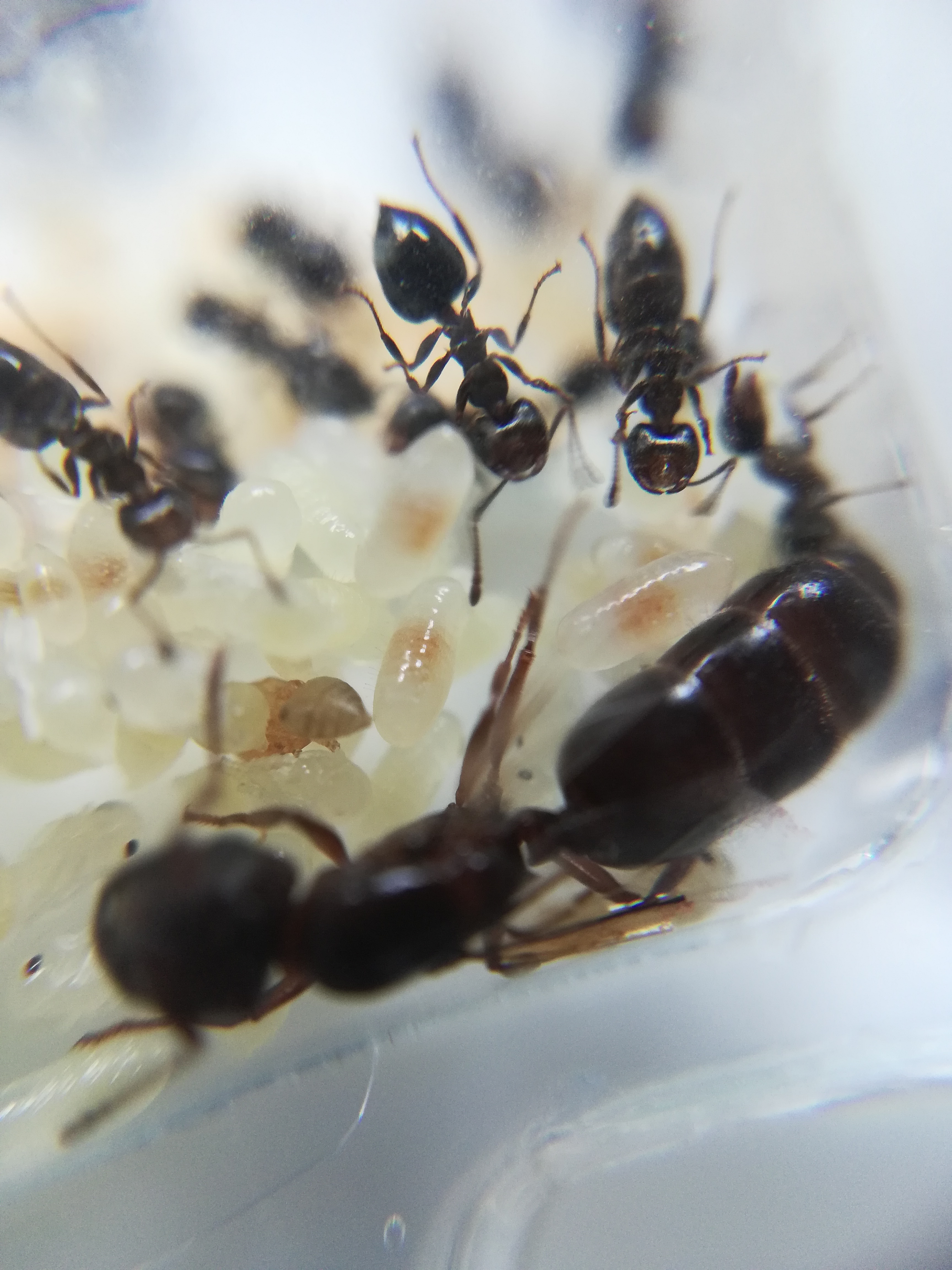 Nothing much has changed with this colony, other than the fact that they continue to grow! I now feed these girls entire large crickets, and they absolutely devour it. They seemed to maybe have slowed down due to the winter time, but still maintain an impressive amount of brood. I am really happy with how this colony is doing, and they are currently one favorite species to keep!

Time for some pics! 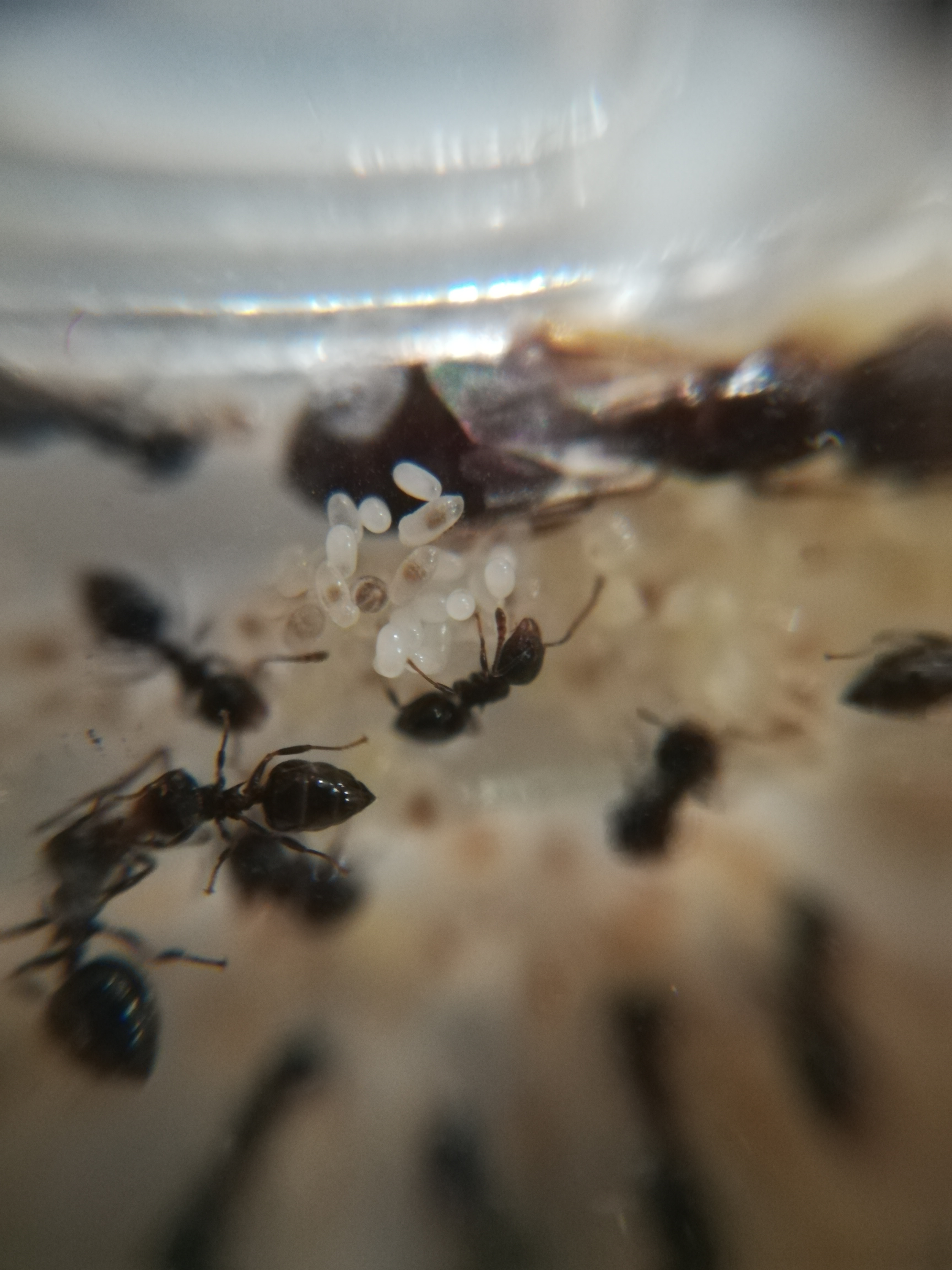 Some of the Colony's Larvae: 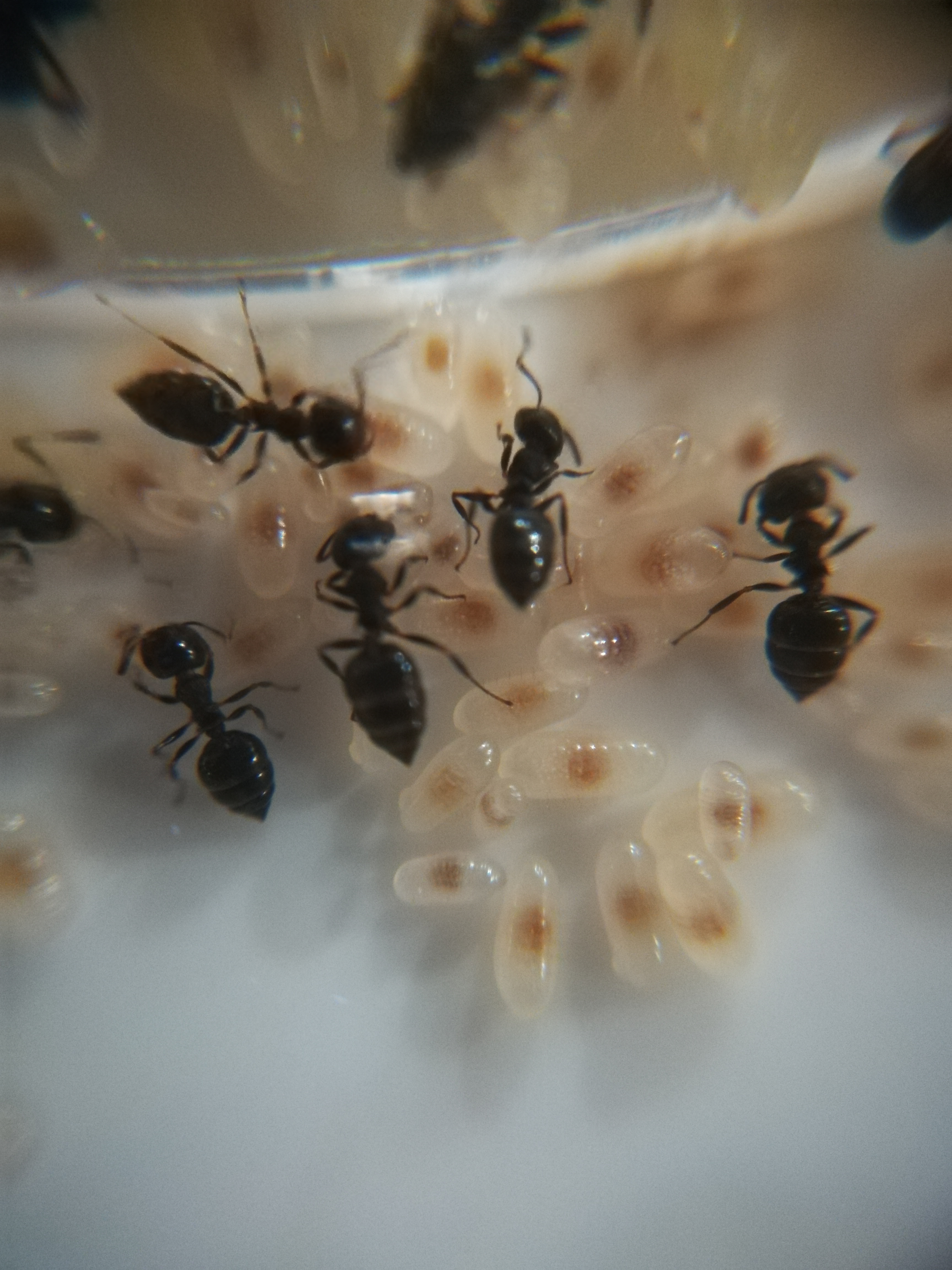 Some of the Colony's Pupae: 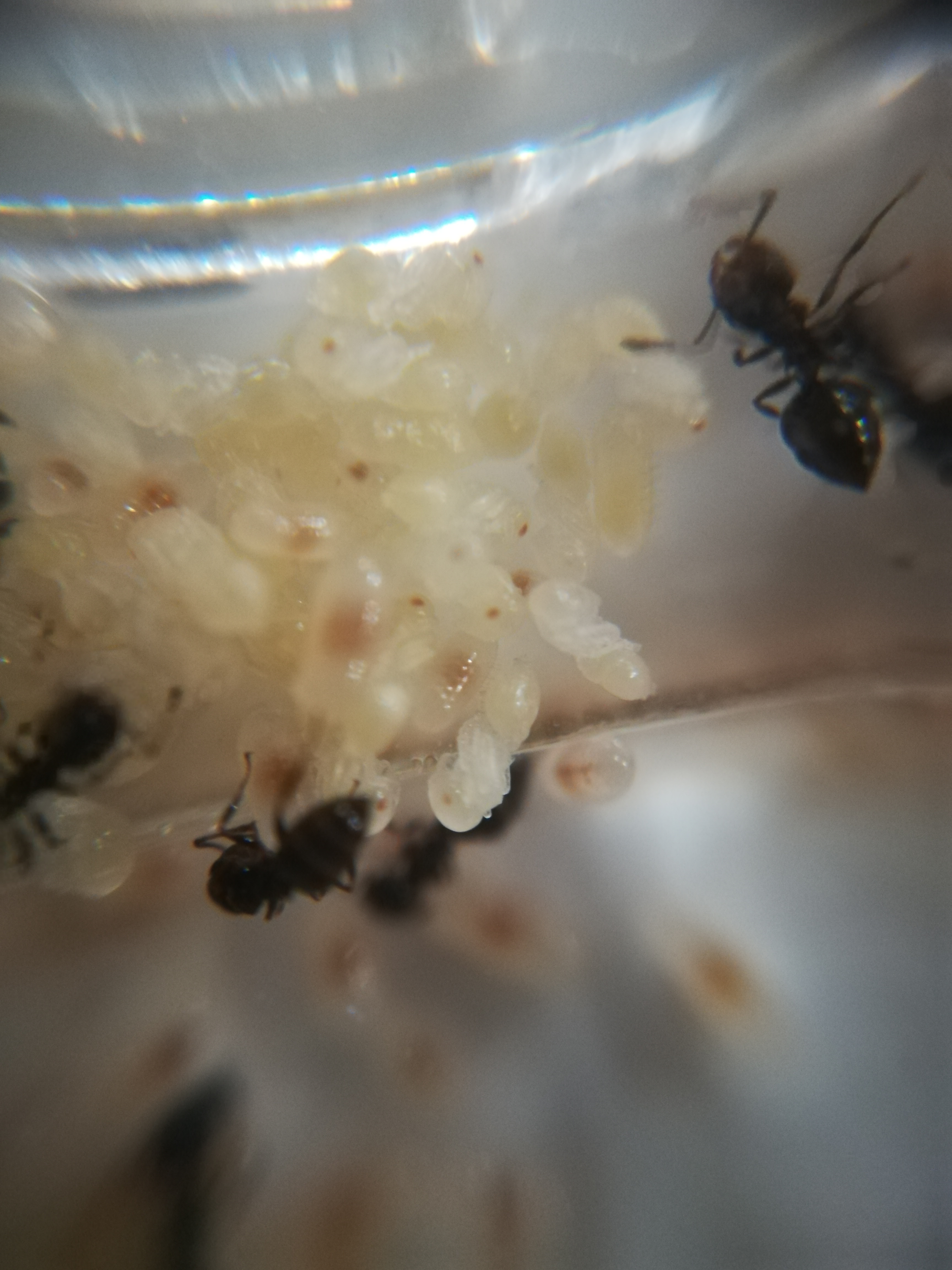 Close-up Shot of the Queen: 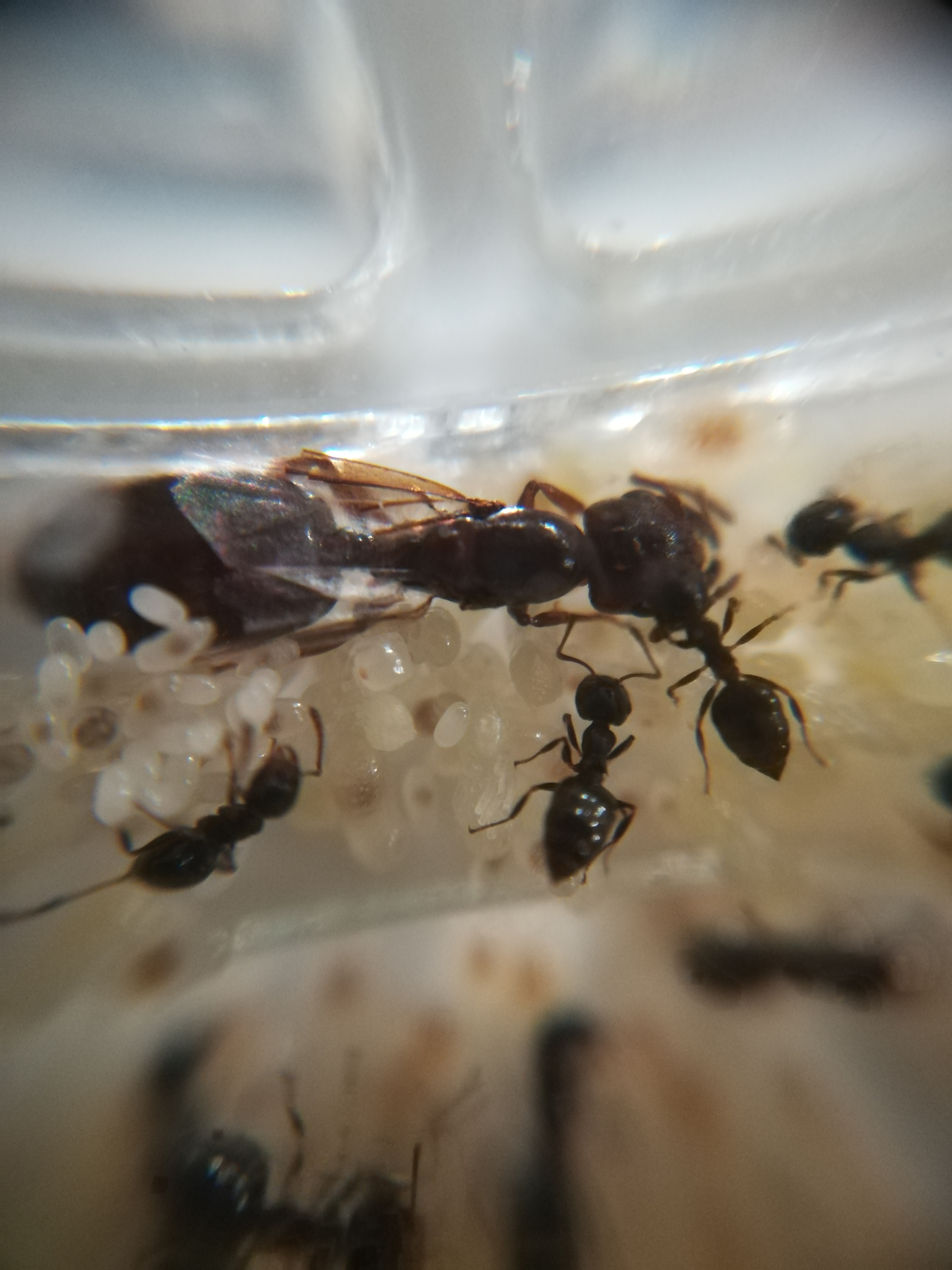 Zoomed-Out view of the Brood Pile: 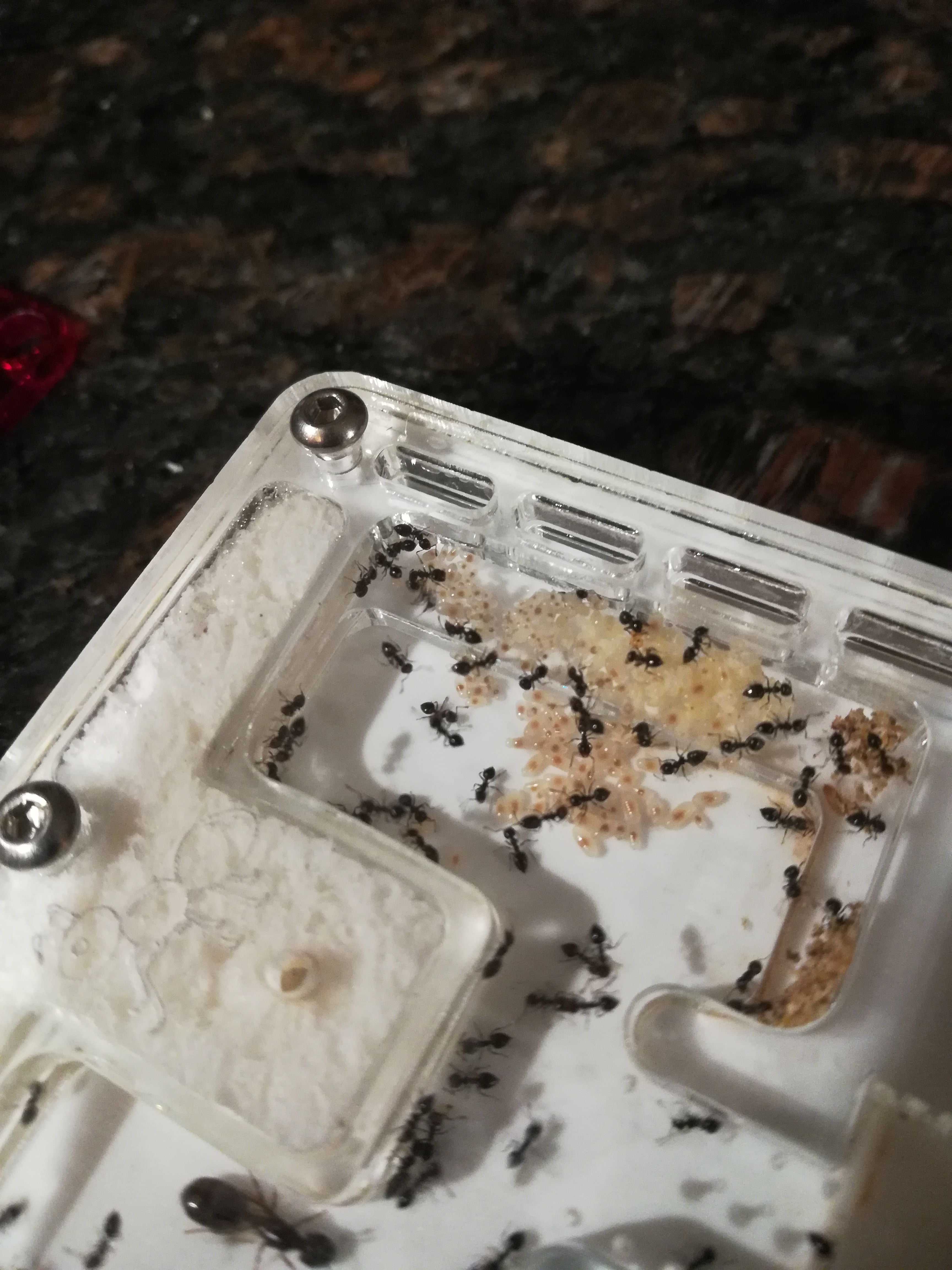 Picture of them drinking Honey(Sorry for the bad photo as I can't use the macro lens in the Outworld): 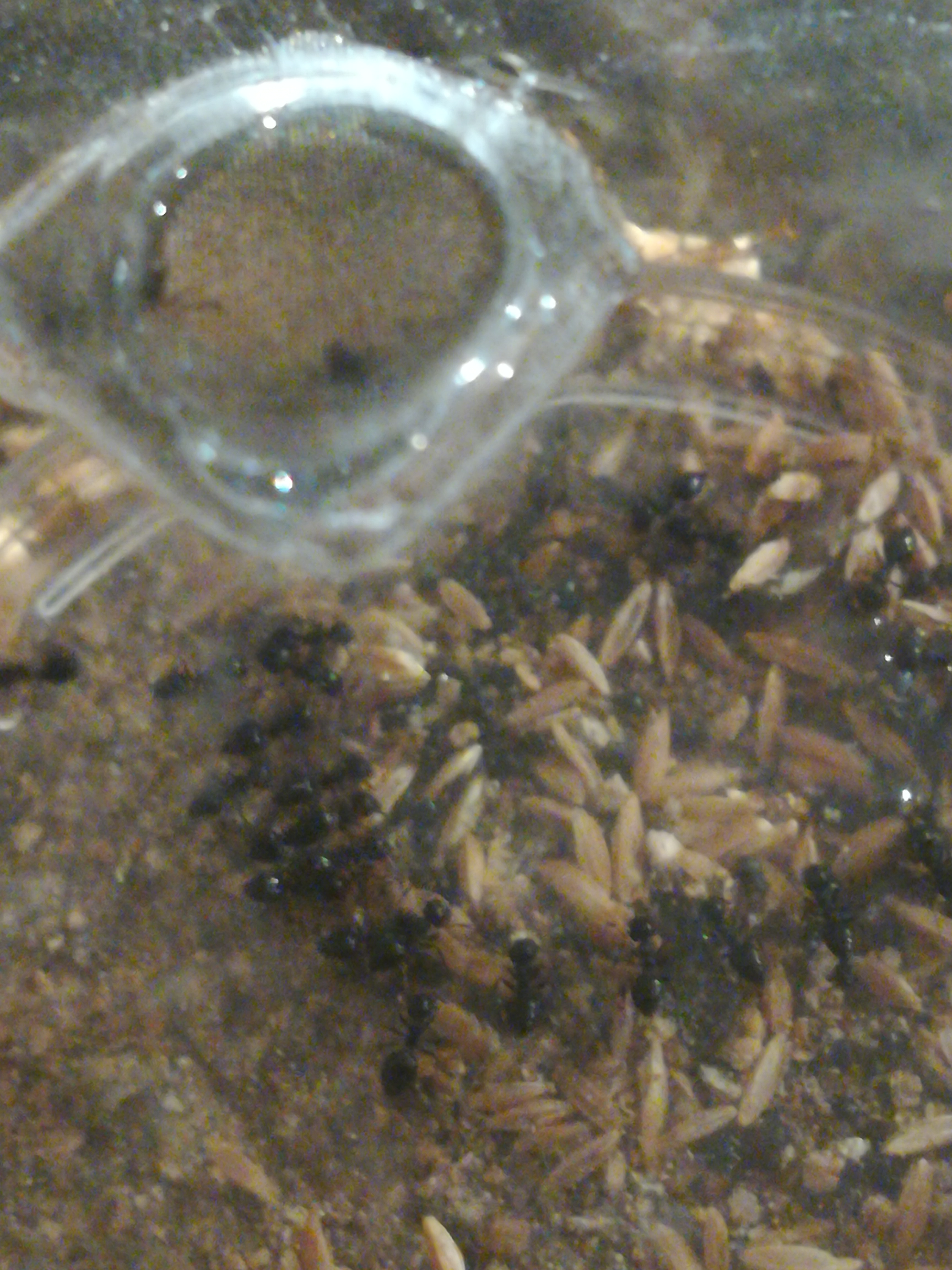 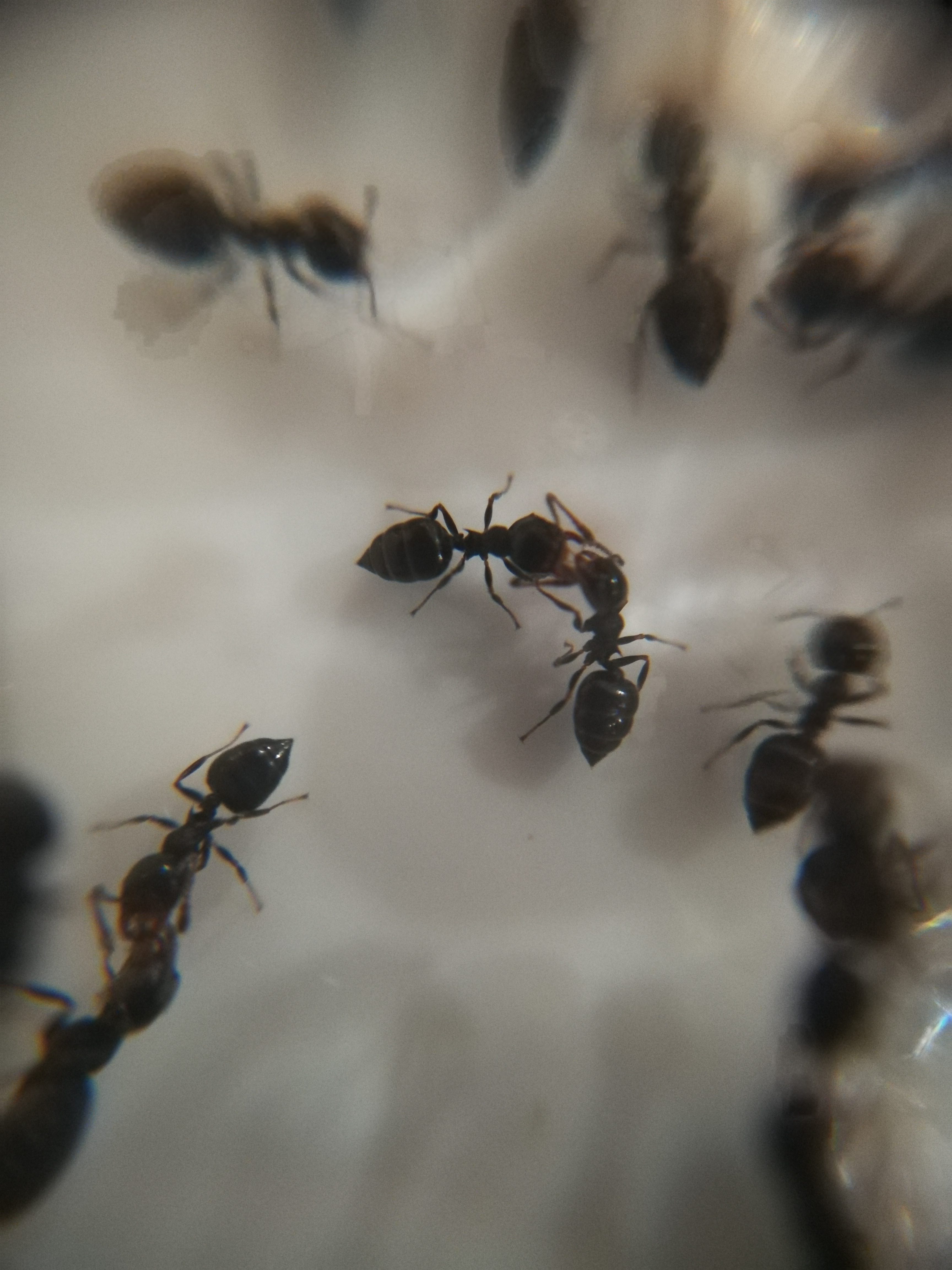 Are those seeds? I didn’t know Crematogaster like seeds. Also when do you change their liquod/sweets. Raw honey can go bad and ferment. YsTheAnt told me about your colony. Real jealous. I like Crematogaster. Also try bloodworm soup. Most ants love it, and the brood develops much faster. Use the freeze-dried Hikari brand.

Are those seeds? I didn’t know Crematogaster like seeds. Also when do you change their liquod/sweets. Raw honey can go bad and ferment. YsTheAnt told me about your colony. Real jealous. I like Crematogaster. Also try bloodworm soup. Most ants love it, and the brood develops much faster. Use the freeze-dried Hikari brand.


Yes they are Kentucky Blue Grass Seeds. I was just experimenting and decided to throw some in there. They mostly ignored the seeds but to my surprise actually harvested a couple and brought it into their nest. I’m just to lazy to clean up the seeds in the outworld;). Regarding the honey, I feed them a water mixed with honey mix as it is easier for them to drink. I think it still has the ability to ferment, but these girls drink the honey up so quickly it doesn’t stay there for too long. I will definitely try making the blood worm soup that you recommend for them.

Yeah the bloodworm soups really helps. Also, you may want to feed that to your aphaenogaster that you caught with YsTheAnt if you still have them.

As for the honey water, just add some hummingbird nectar. The nectar acts as a preservative.

Also tagged with one or more of these keywords: crematogaster, journal, antkit