Termite alates are flying in now, at least near the bush behind the football park near me.
I was looking there after dusk with a torch to see if A.longiceps were flying, they were not... and was walking back up a ramped road at the back of the football field on the edge of bushland, and saw a winged termite alate on the road.
So I put the torch down to try and capture her, which is hard!
I had to use a sheet of small paper to do it in the end. And more arrived both winged and unwinged, attracted by the torch I guess.
Lots of Camponotus were running around as well, nigriceps and consobrinus, plus Polyrhachis

So these appear to be a Heterotermes cf brevicatena species.

I see some pairing, but it's hard to get a container that they can run in, without letting them escape, they slip on plastic etc.
In the end I just put some wet tissue at the bottom of a glass petri dish
Paired couple, female looks so similar to the male 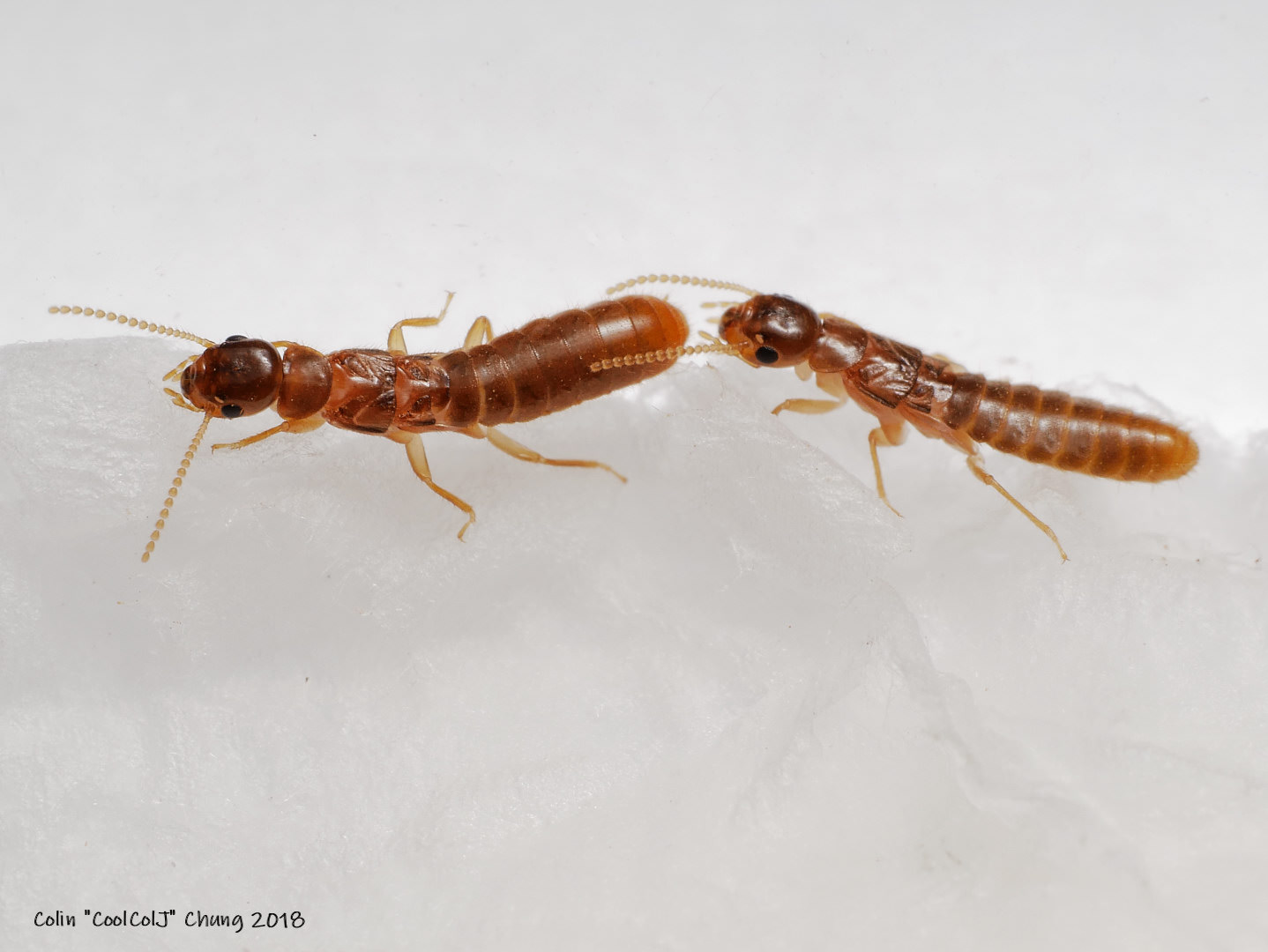 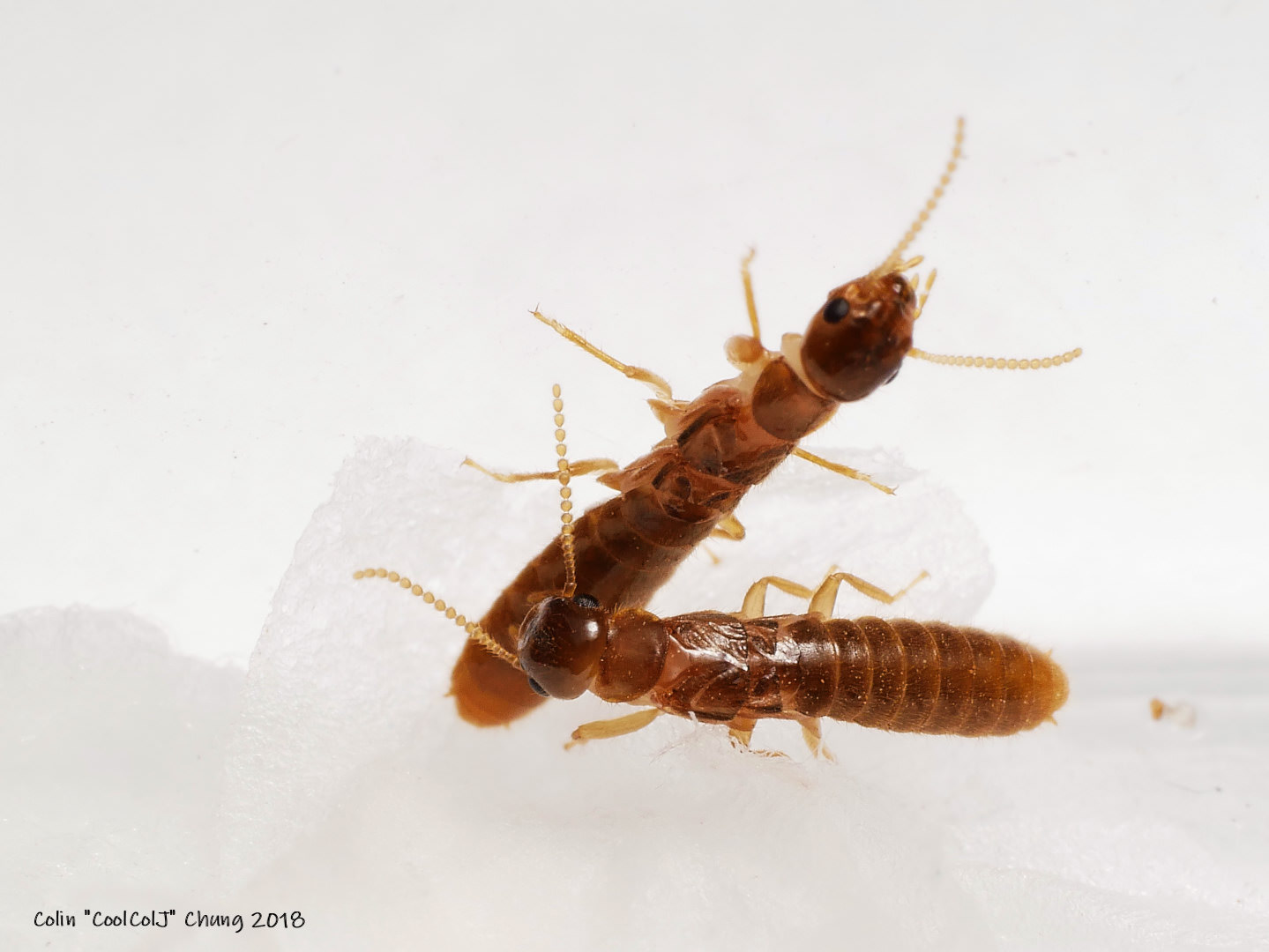 2 Paired up immediately which I put in a test tube based all wet cotton setup. They have been digging and munching on the cotton already extending the starting chamber I made them. 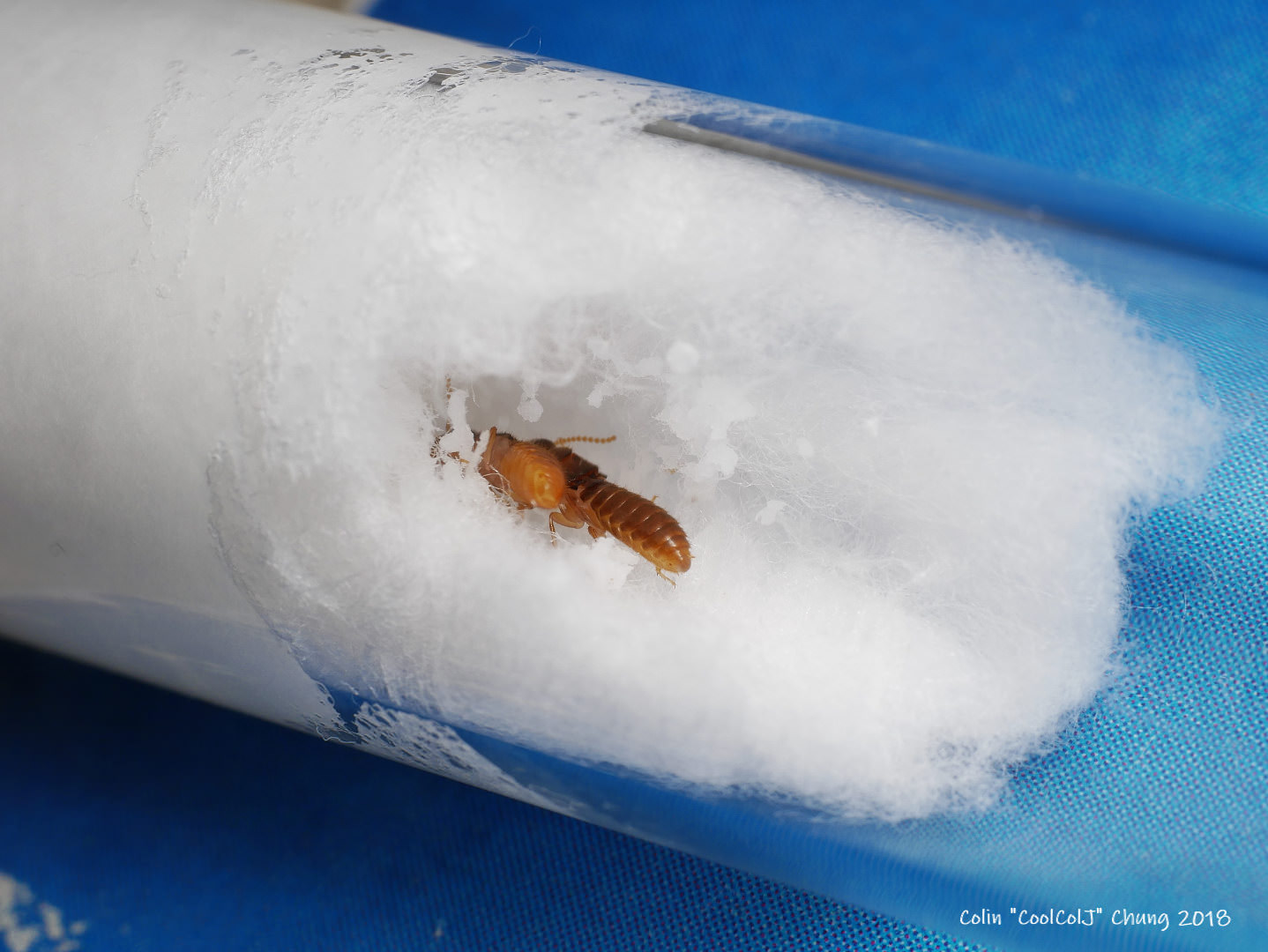 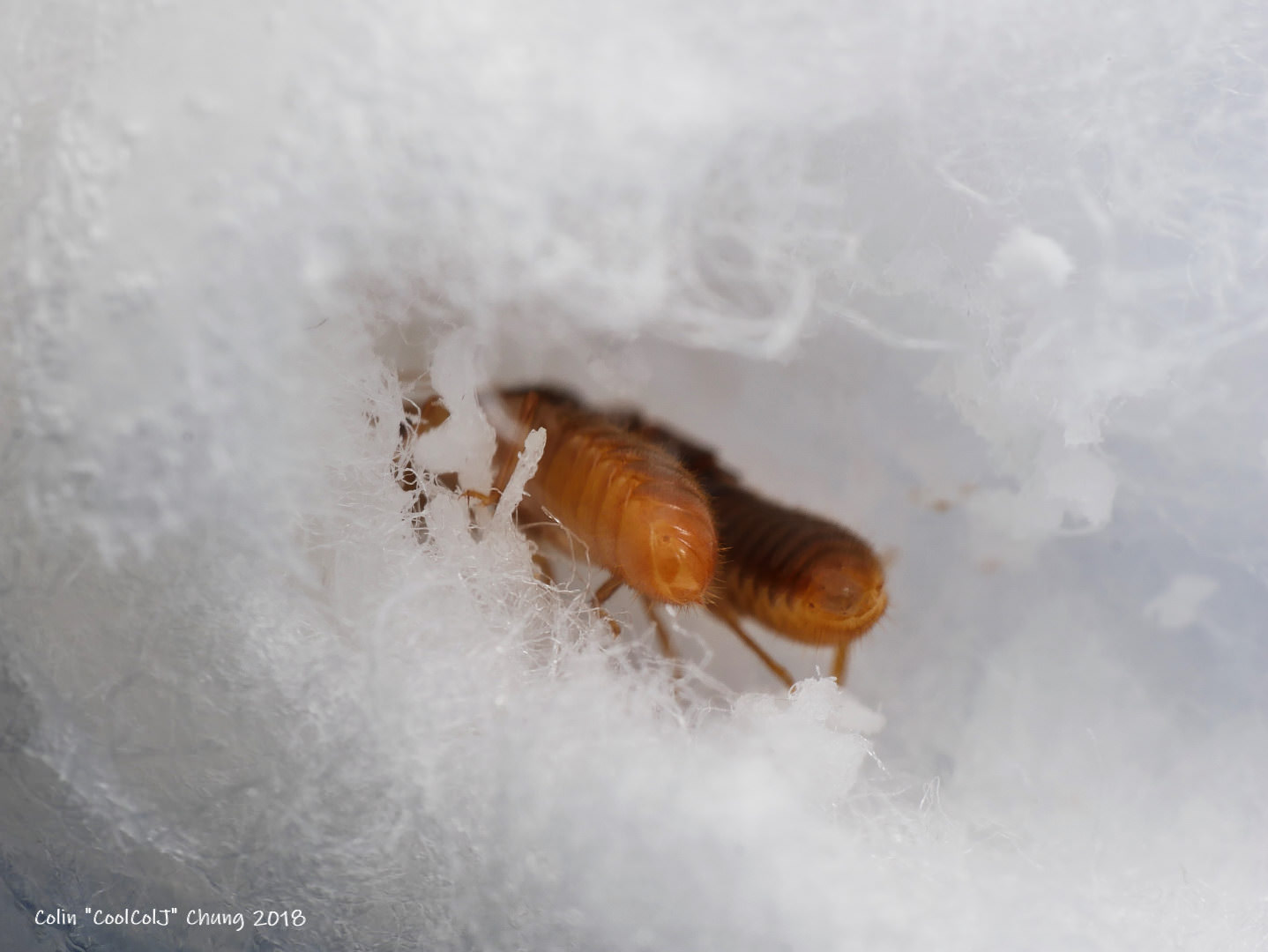 Of the 5 remaining 1 male died which I fed to my R.metallica queen, then another was fed to one of my Pheidole colonies... they ripped it's head off instantly.. I think the Major did it! 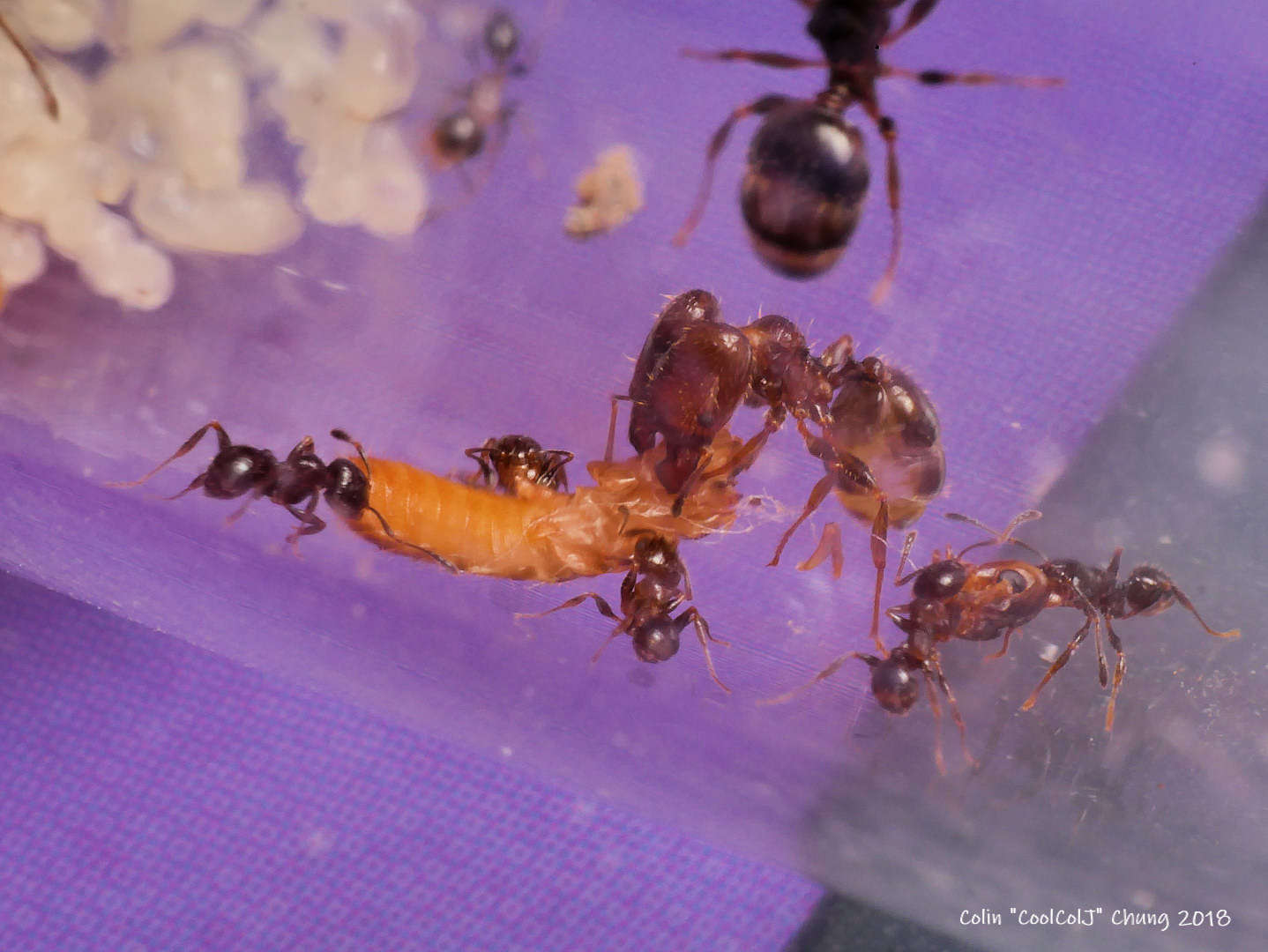 So the remaining 3 - 1 queen and 2 kings went into a wet toilet paper test tube setup, and they too have tunneled a little. I don't know what dynamic having 2 kings will have...

But whenever I see the queen move one male tries to tandem run with her while the other one goes crazy and they all run around a bit and then settle, and remain static for long periods 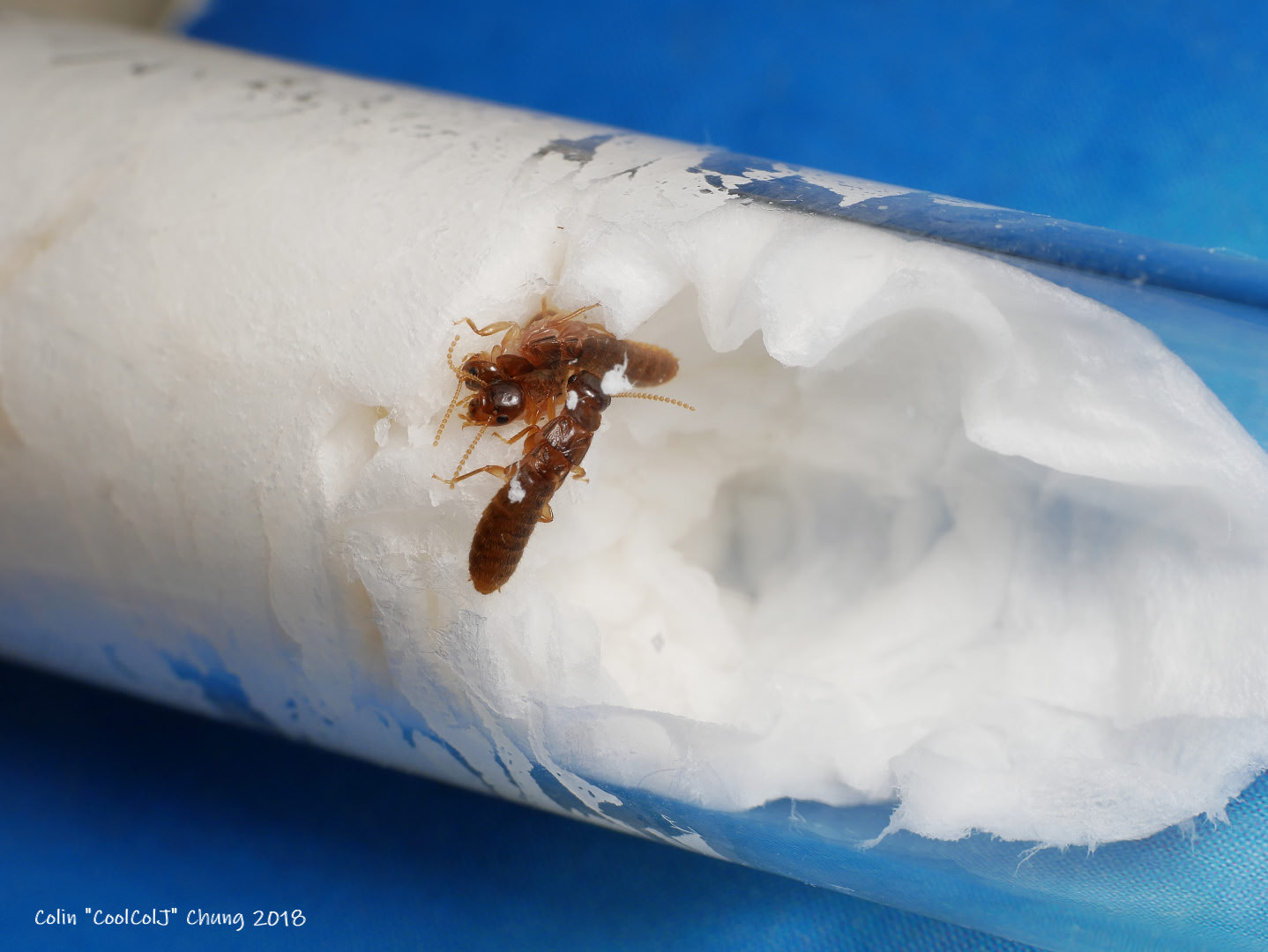 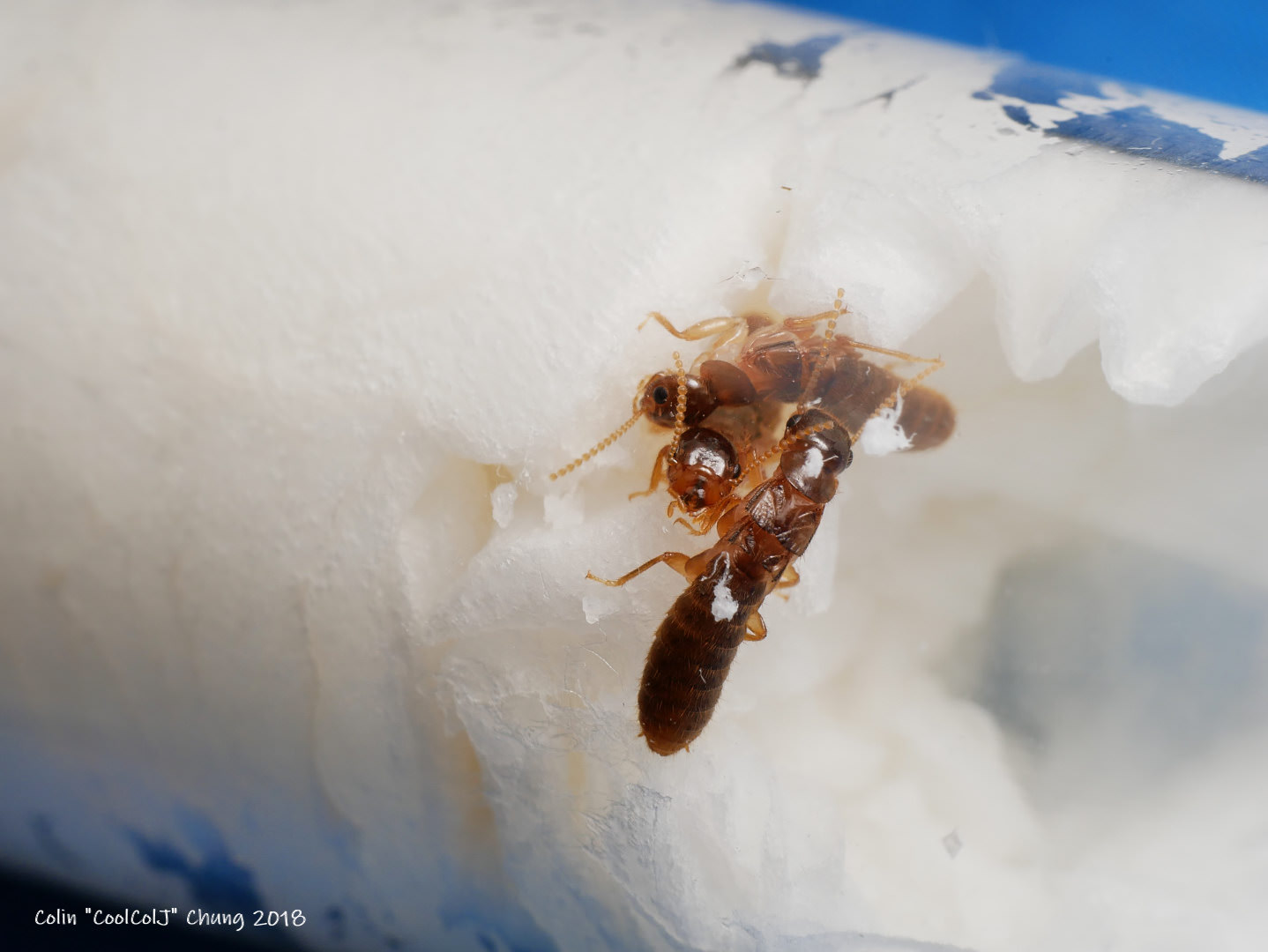 Toilet paper setup - one of the two males/kings , I think, looks to have separated himself from the main couple, so I'll remove him and feed him to my ants....

interesting - that setup above, they have been fighting.... I see some severed legs.. and one dead termite... I think I may have removed the wrong termite to feed my strobe ants...

So with only 1 termite in that setup, it's time to retire the lone termite...

So with only 1 termite in that setup, it's time to retire the lone termite...

Do keep an eye out for more, and consider moving your cotton ones to the toilet paper if they aren't already established - toilet paper seems much easier to dig in. Although I suspect it may dry out faster.

Fed the lone termite to my Polyrhachis, well I put it inside their test tube and it ran up to the cotton and then got set upon by the single nanitic
Kill 2 birds with one stone

Then I moved the couple to the toilet paper setting, I used a kebab skewer and lured them onto it, easy move

Are heterotermes able to fully sustain off of toilet paper or cotton?

Are heterotermes able to fully sustain off of toilet paper or cotton?

We will find out I guess

Have only moved and widened a passage a few mm...

They are also tunneling against the the side of the test tube.

So 3 weeks on they are still alive, so I guess toilet paper does them good

They have made a 15mm x 5mm slightly curved passage on the left side of the test tube against the glass.
I have red film around the test tube, and they don't mind it obviously

So now, both termites can be fully inside this passage.

I can see one egg against the glass inside the furthers end of the test tube!
Will try and get a pic soon

So 3 weeks on they are still alive, so I guess toilet paper does them good

Glad to hear it - It's interesting how some termites don't do well in that kind of setup, but others (like these), seem to prosper.

The happy Heterotermes cf brevicatena termite couple with their single egg, top left of chamber.
Took them 3 weeks to dig/eat out this little chamber against the side of the test tube, of wet toilet paper.
I also see them clean each other and chat 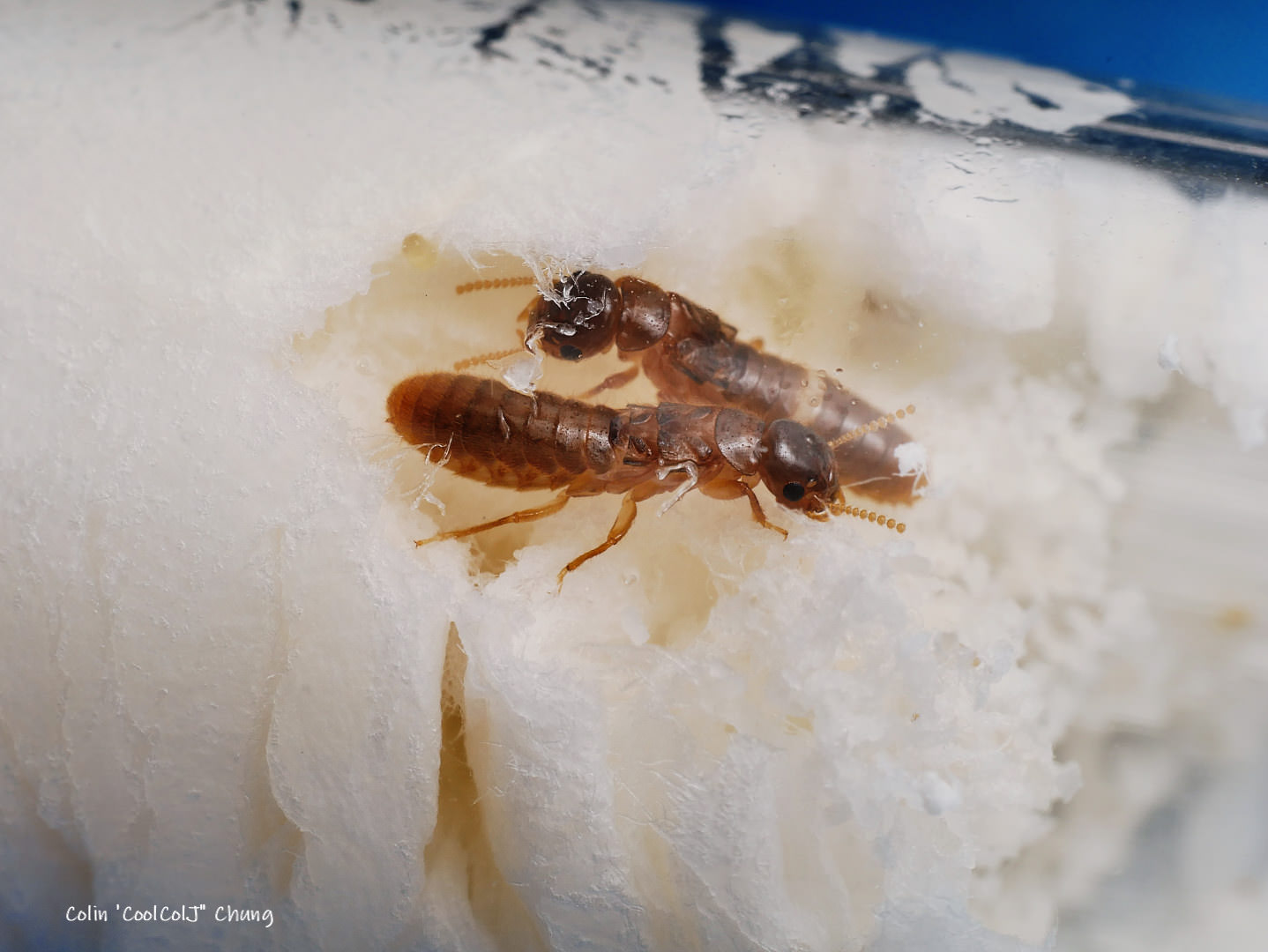 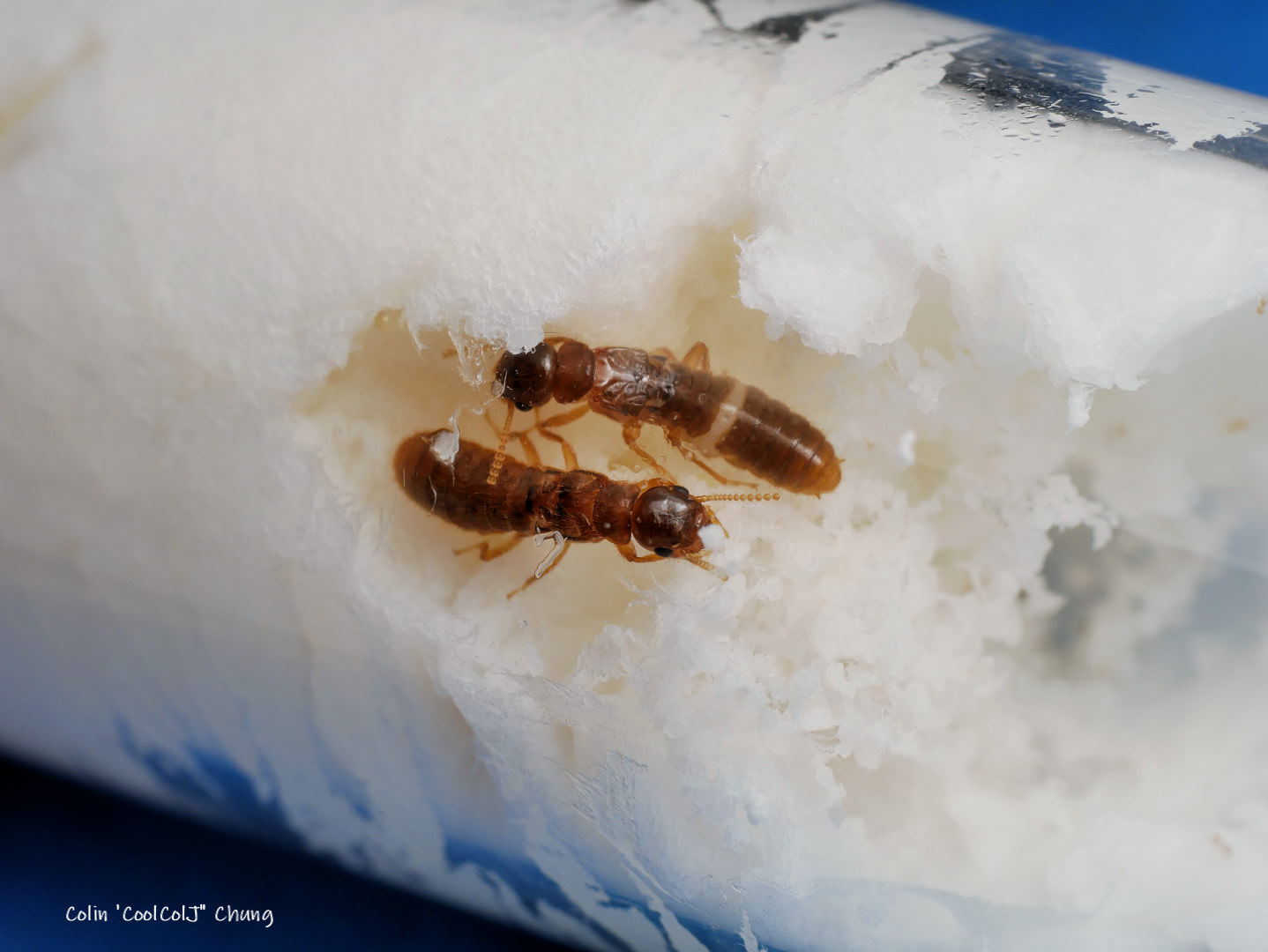 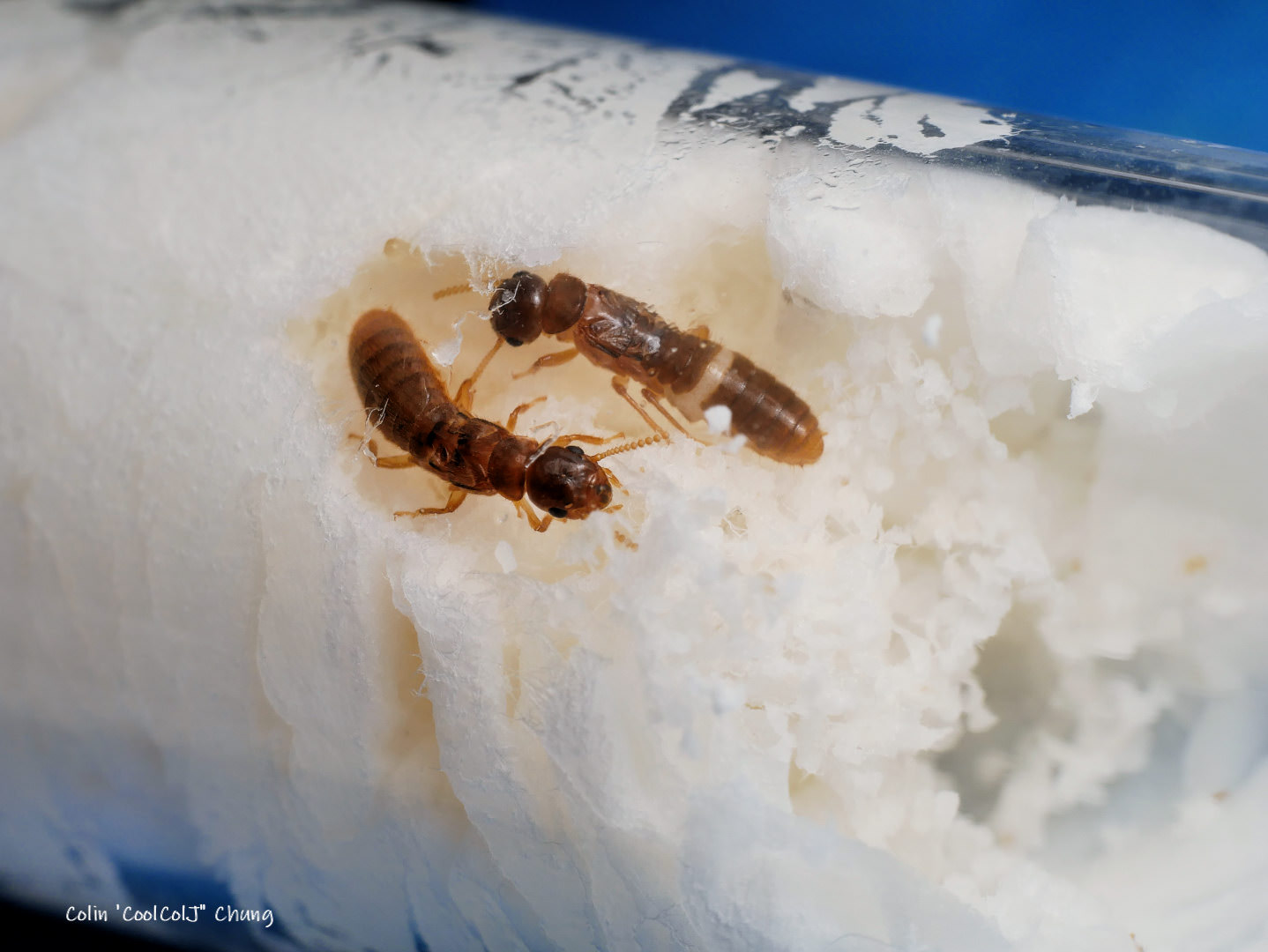 I noticed the female has a white band on her gaster that she did not have before.
So she is expanding

Second egg has been laid, and the queen's bum is expanding, more white showing through the brown plates on her gaster.
You can see the split on the gaster in the photos above.
Makes it easy to tell the queen from the king now

The chamber is now large enough for both to sit side by side
Haven't caught them mating yet, despite the great visibility

Any signs of mold yet? I'm trying to determine what factors lead to mold in my toilet paper setups, wherin some tubes have mold, whilst others are empty of such. I wonder if maybe founding pairs have mold inhibitors? I don't have any to test my theory.

Any signs of mold yet? I'm trying to determine what factors lead to mold in my toilet paper setups, wherin some tubes have mold, whilst others are empty of such. I wonder if maybe founding pairs have mold inhibitors? I don't have any to test my theory.

The pics above were taken a week ago, and 3 weeks since being wet and no mold.

While the container of toilet paper in my incubator that i wet to maintain humidity, the top one has molded already.

Perhaps exposure to air might be the cause, with the spores and stuff

No mold as far as I can see.
I squirted some water into the front glass part of the test tube and let it seep in, but it didn't absorb so still pretty wet

Couldn't see where they moved the eggs to through the red film.

Put the test tube into my ghetto incubator to speed things up a bit.

They have spent a few weeks in my incubator, and today this is what I see, they dug up a new passage and made a new wall of substrate.
The toilet paper looks a little dry, so maybe they are doing this to keep humidity up inside.
I added water and they came outside. They have some eggs but I can't see them from outside anymore. No nymphs or workers yet

click to enlarge
some mold on the tip, but clean everywhere else 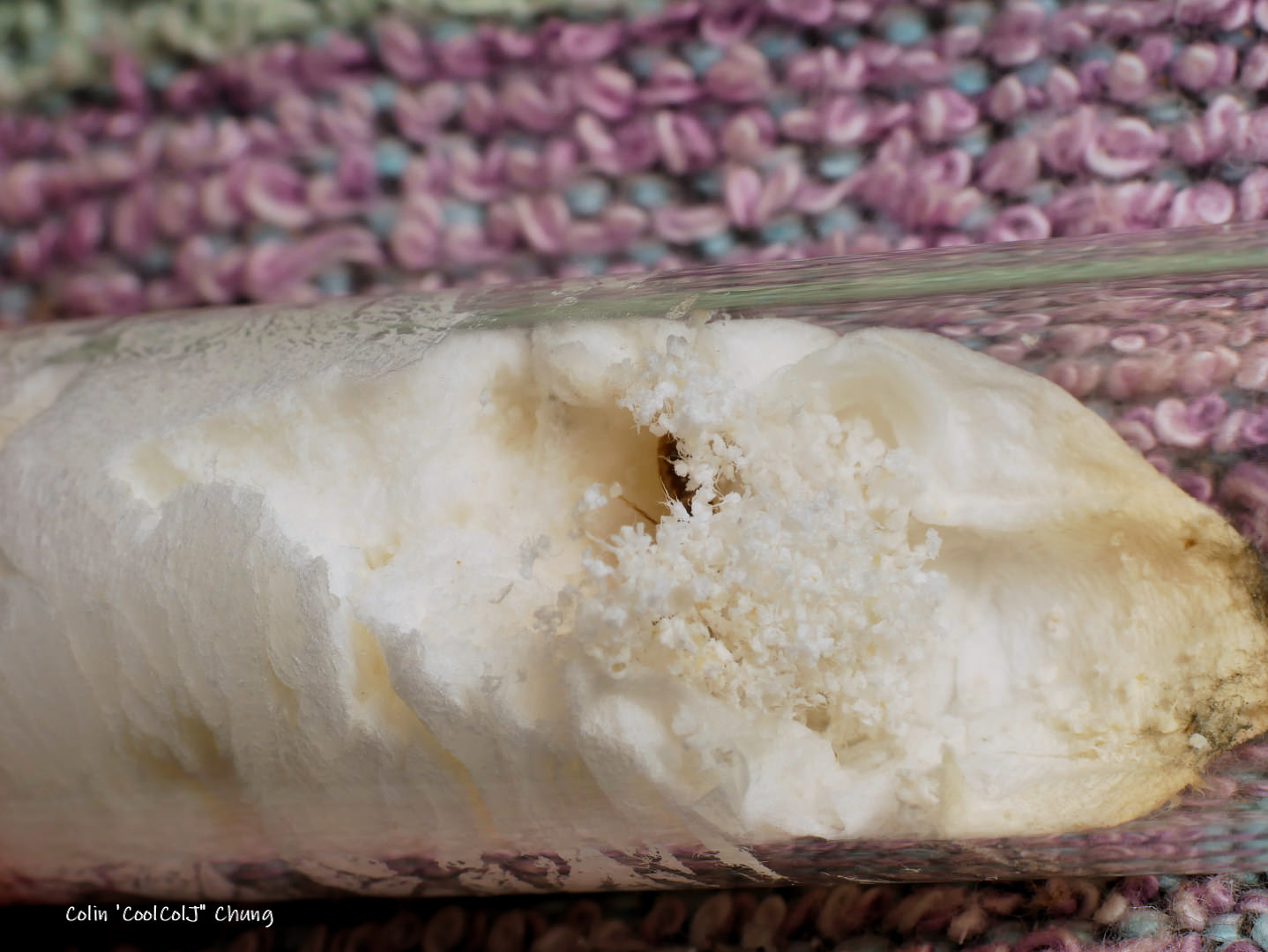 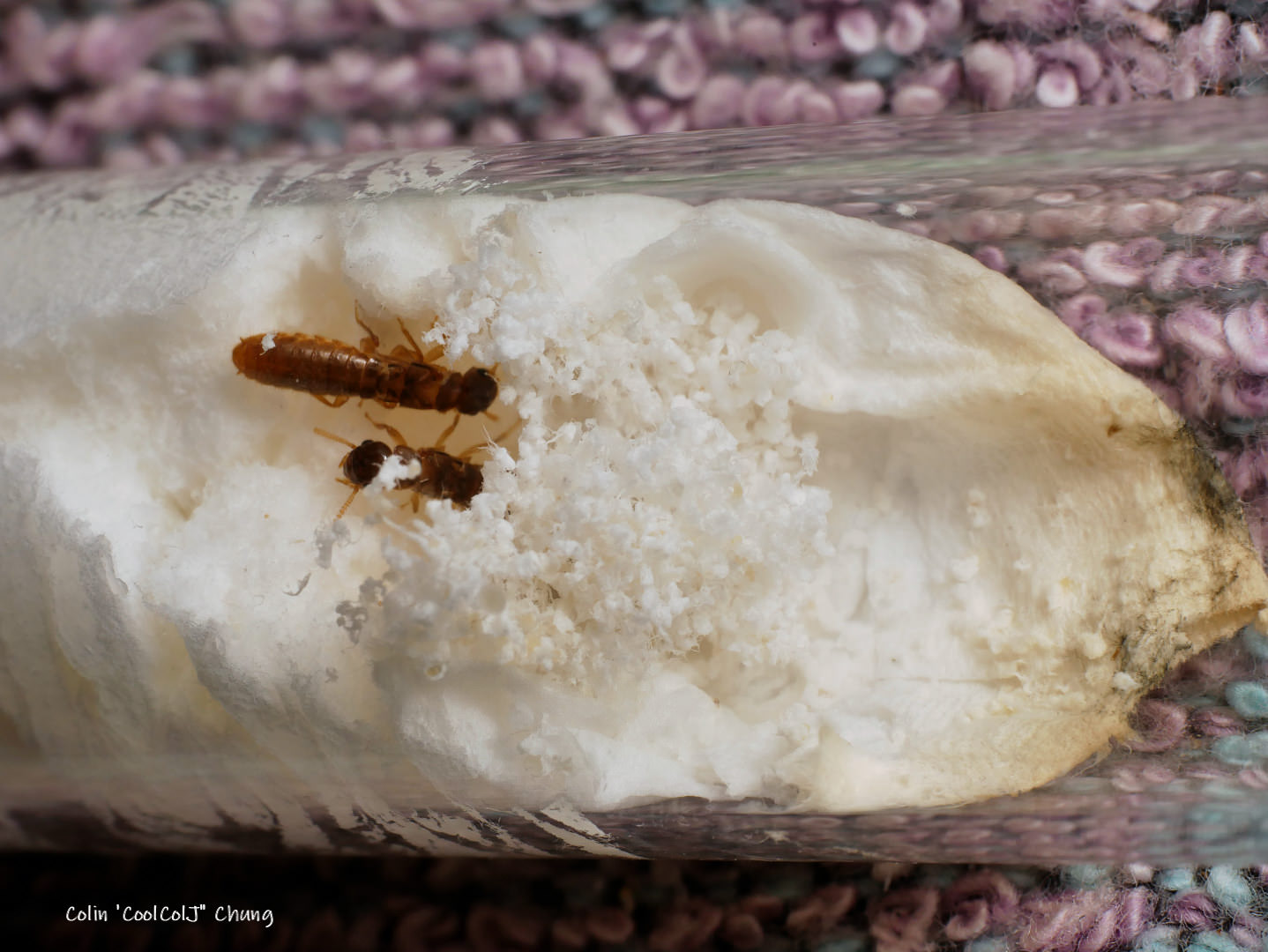 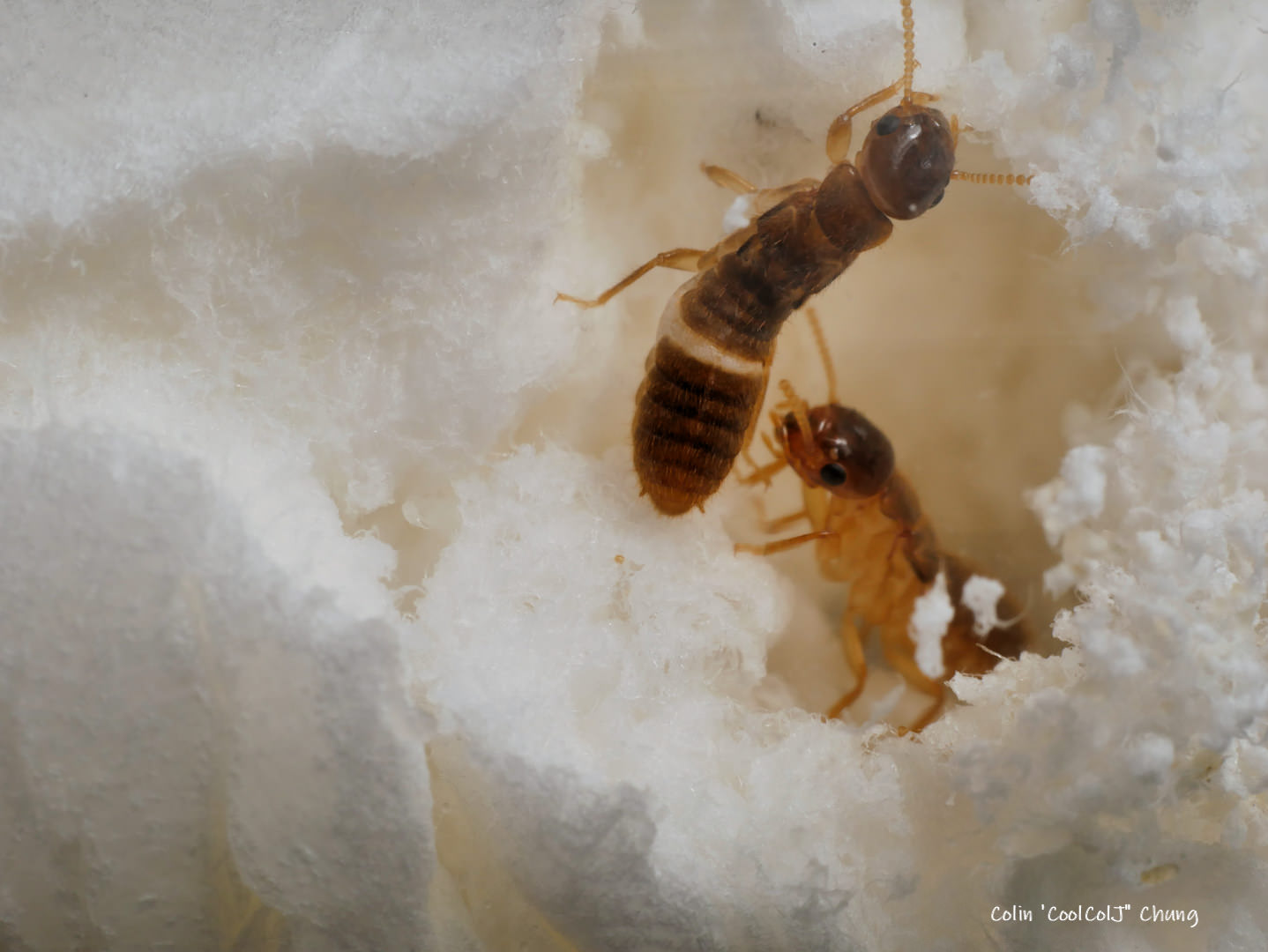 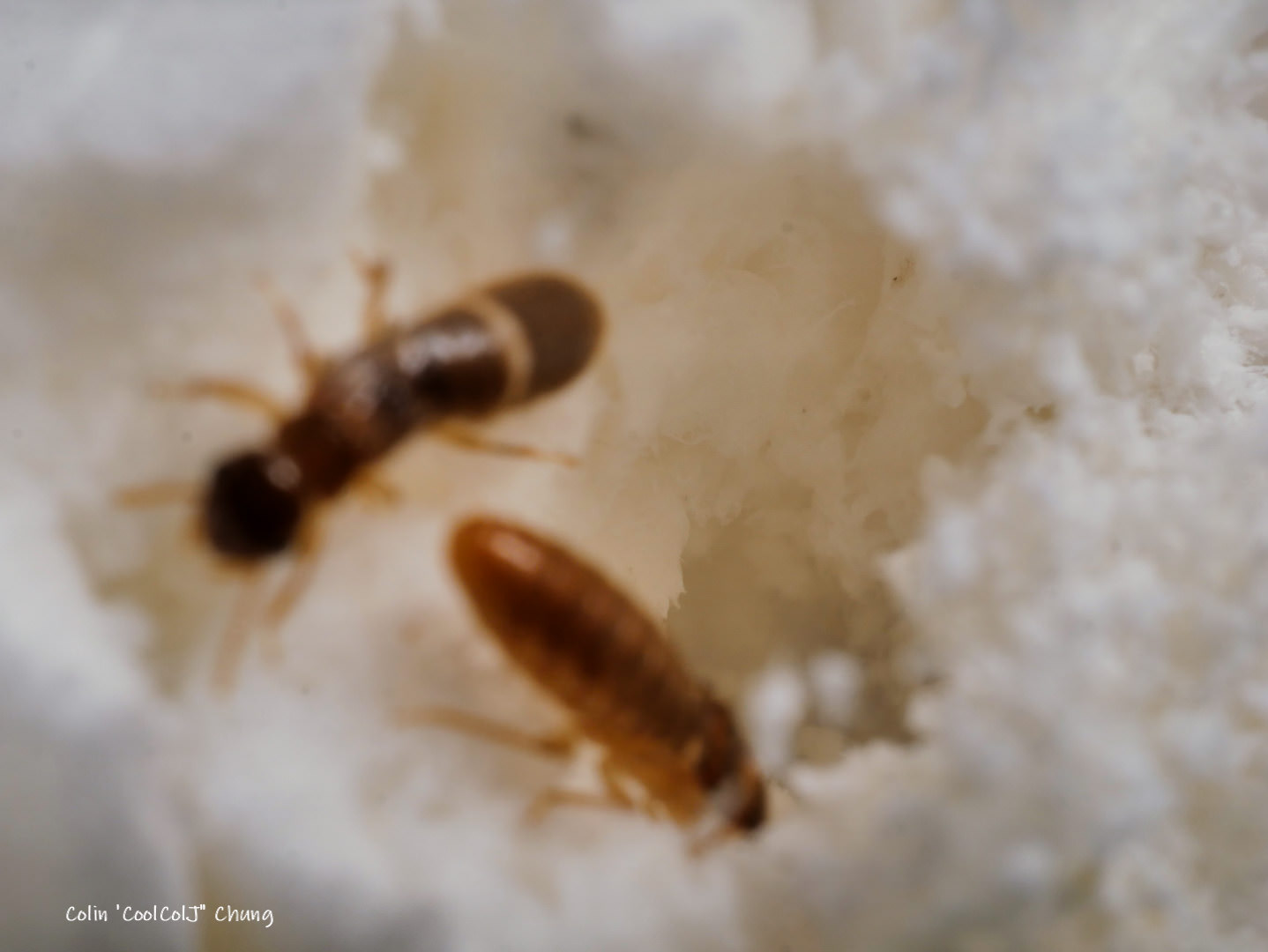 Took them out of the incubator to make room for some ant setups.
No sign of any workers

They have made a new tunnel, against the glass, from the passage on the left in this pic

I don't know what is going on inside the nest.
They did make that new tunnel and occasionally see them move down it, but they still stay front area most of the time.
I can't see their brood so have no idea where they are development wise.
2.5 months since first egg was laid and no sign of any workers yet.