40 replies to this topic

That pronotum is way too large to be Zootermopsis. The mandibles don't look to be parallel to the head either.

Yea, those soldiers have much more bulk in them then the soldiers in my drywood termites. Venydayn can you take more picture of your soldier because I want to take picture of my soldiers also and compare them together.

here are more pics, some will be better than others

Also you can kinda see it in the last picture, but the mandibles look like they curve upward. Unless it was how the picture came out because it clamped its mandibles together, but it looks like they go upward. And I thought that was what I noticed when I was looking at the soldier with my own eyes, I thought that might be a bit unique/standing out feature. 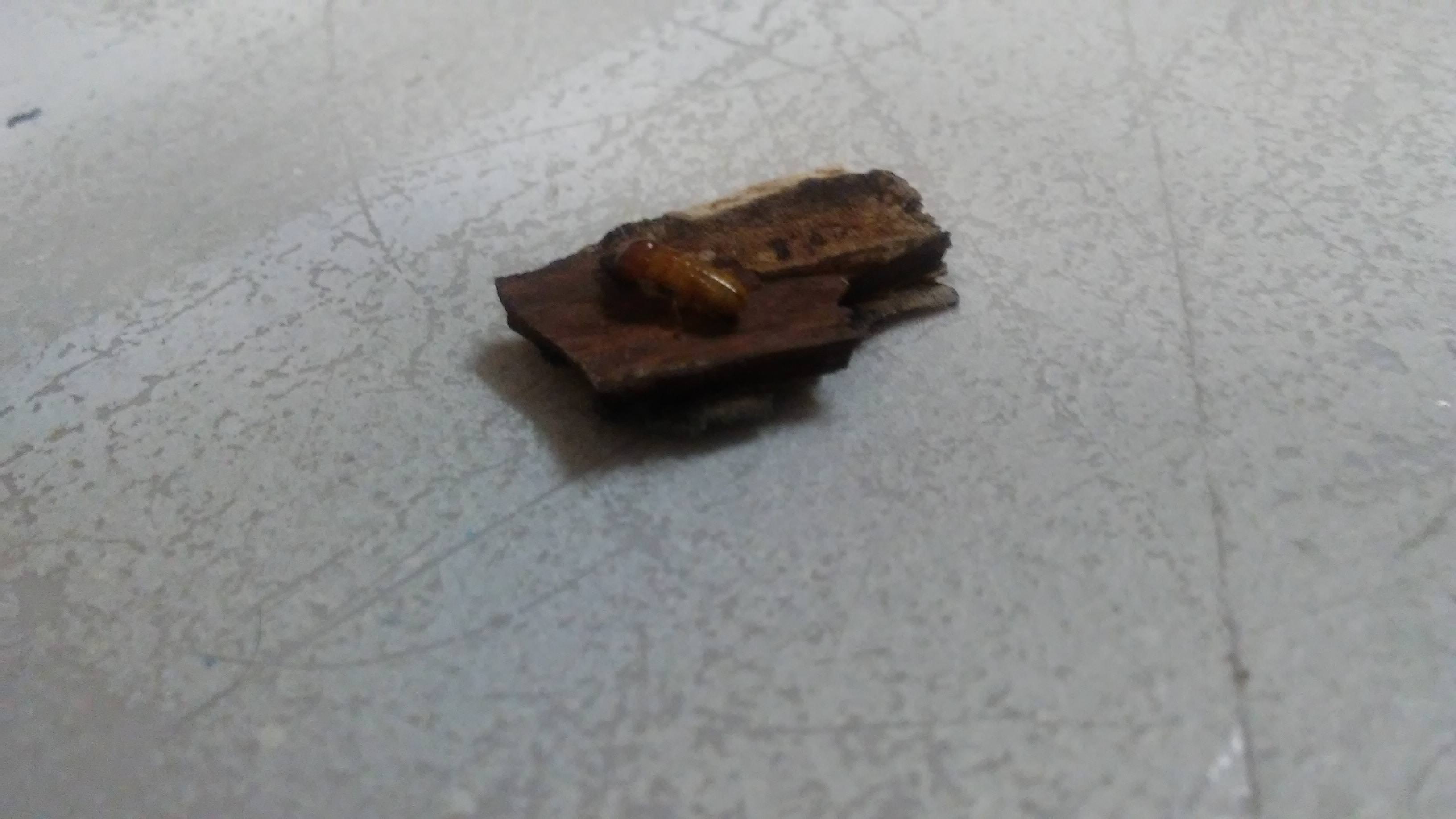 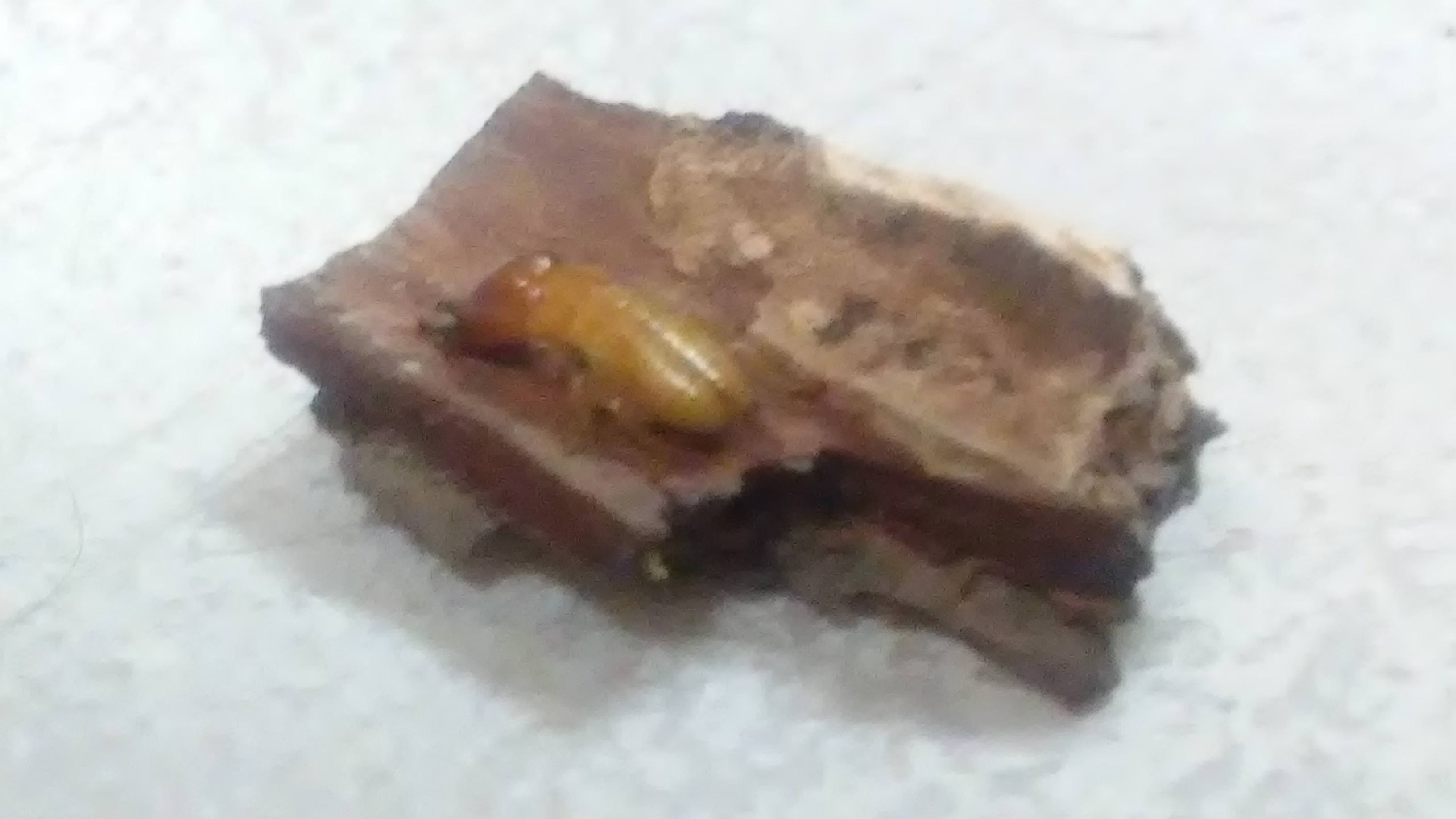 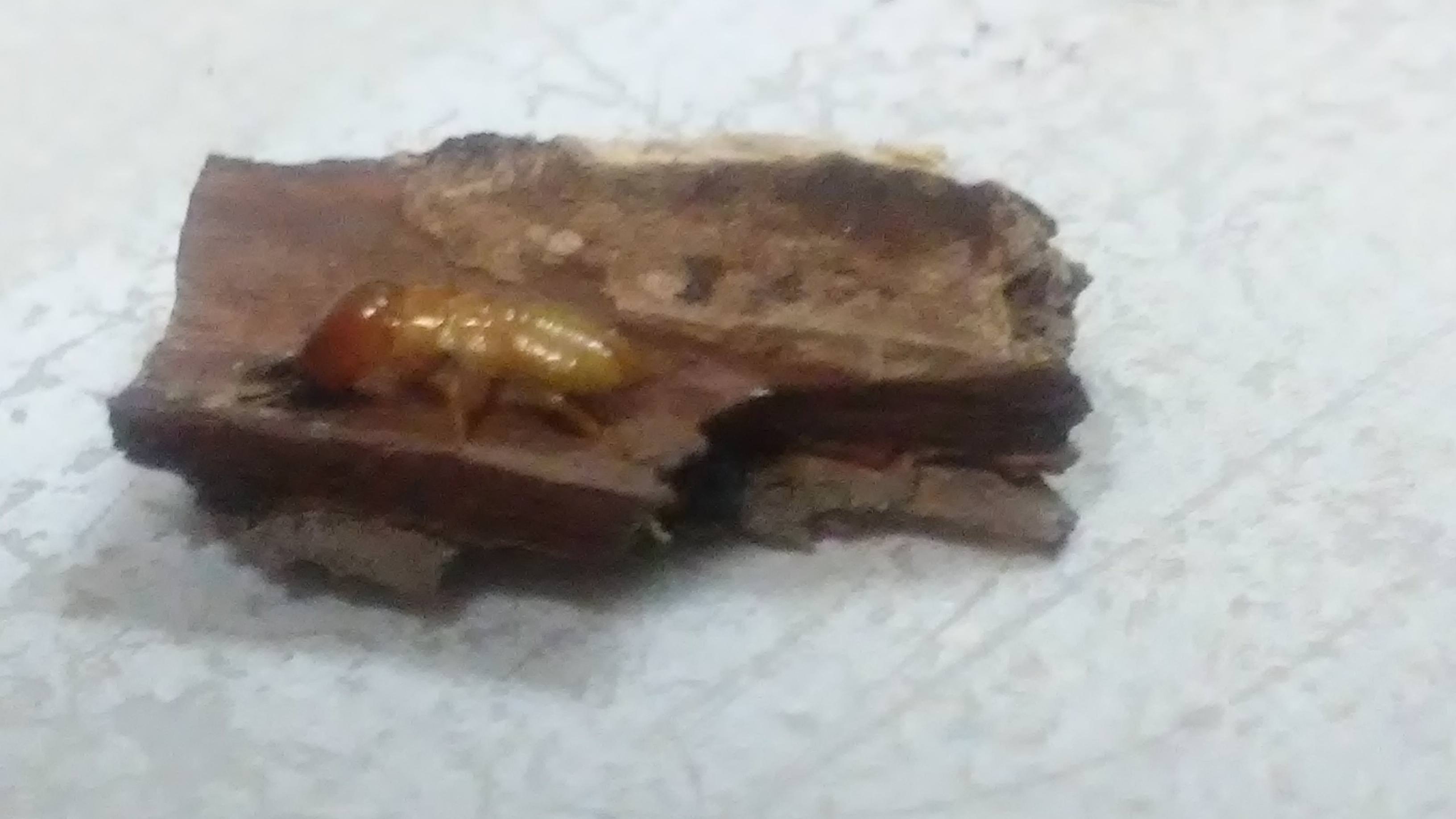 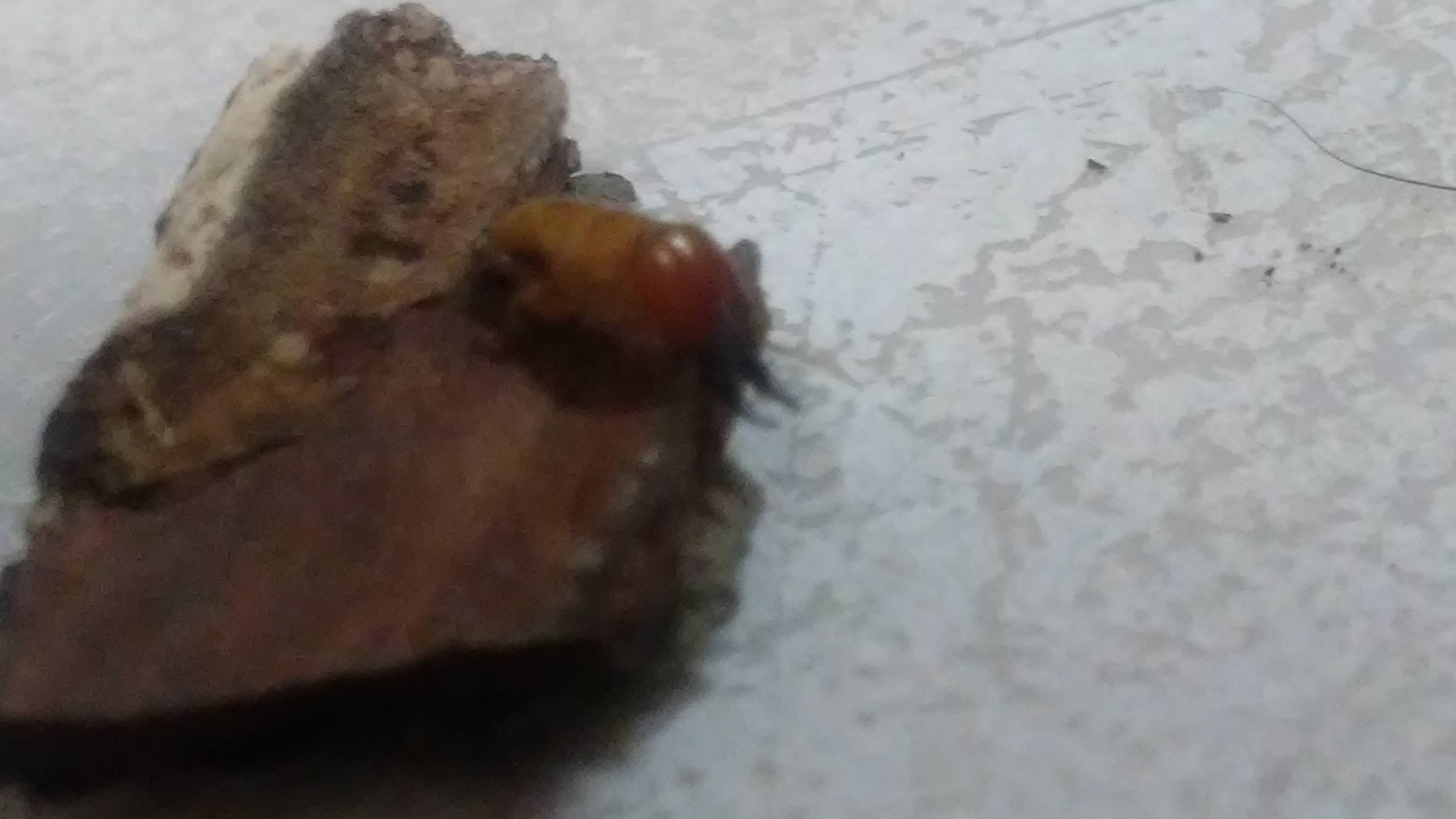 Yeah they do curve up, and my wife confirmed it

And here some more, these came out quite a bit better, can see the upward curve (which the curve is quite noticeable). 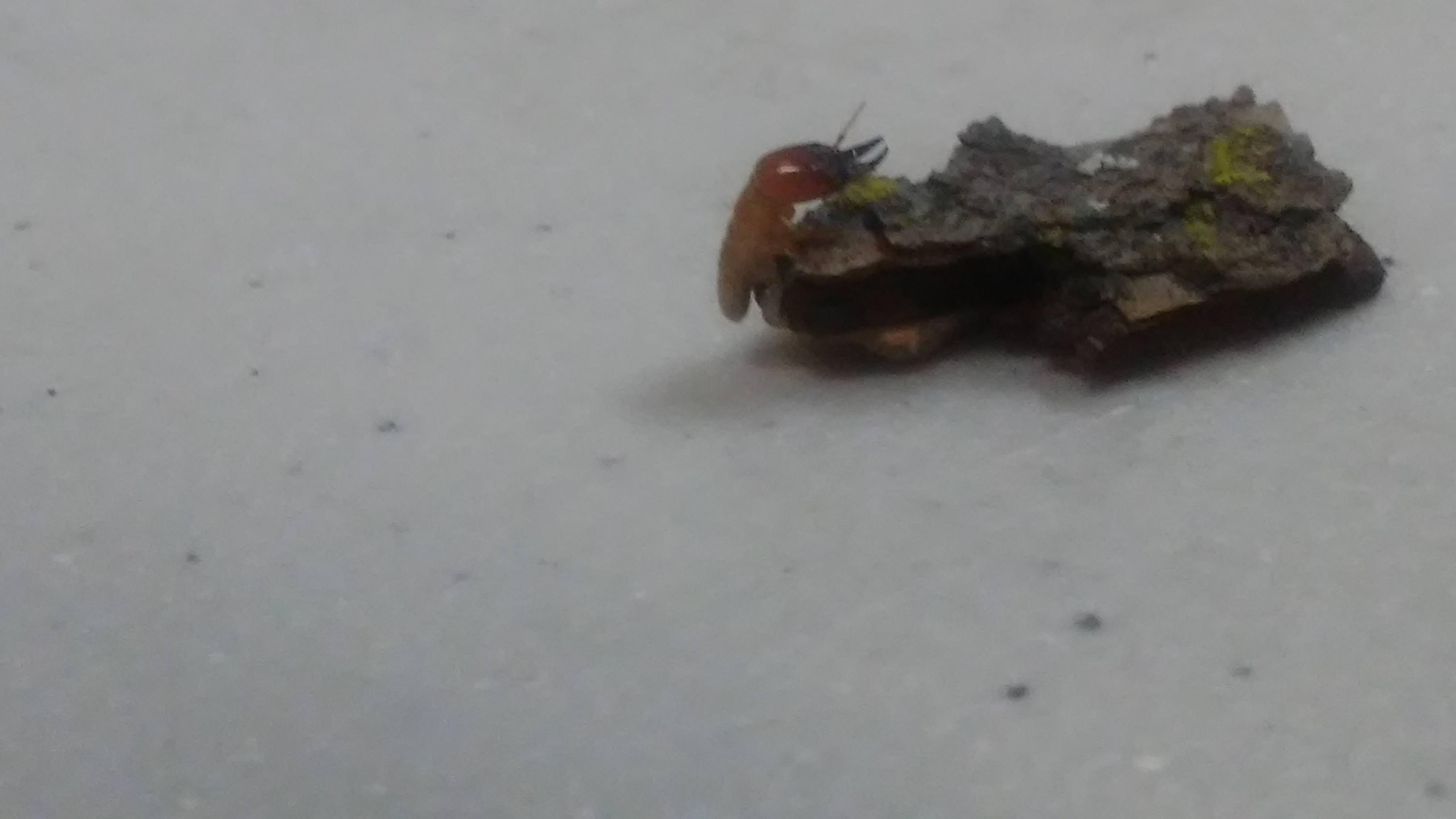 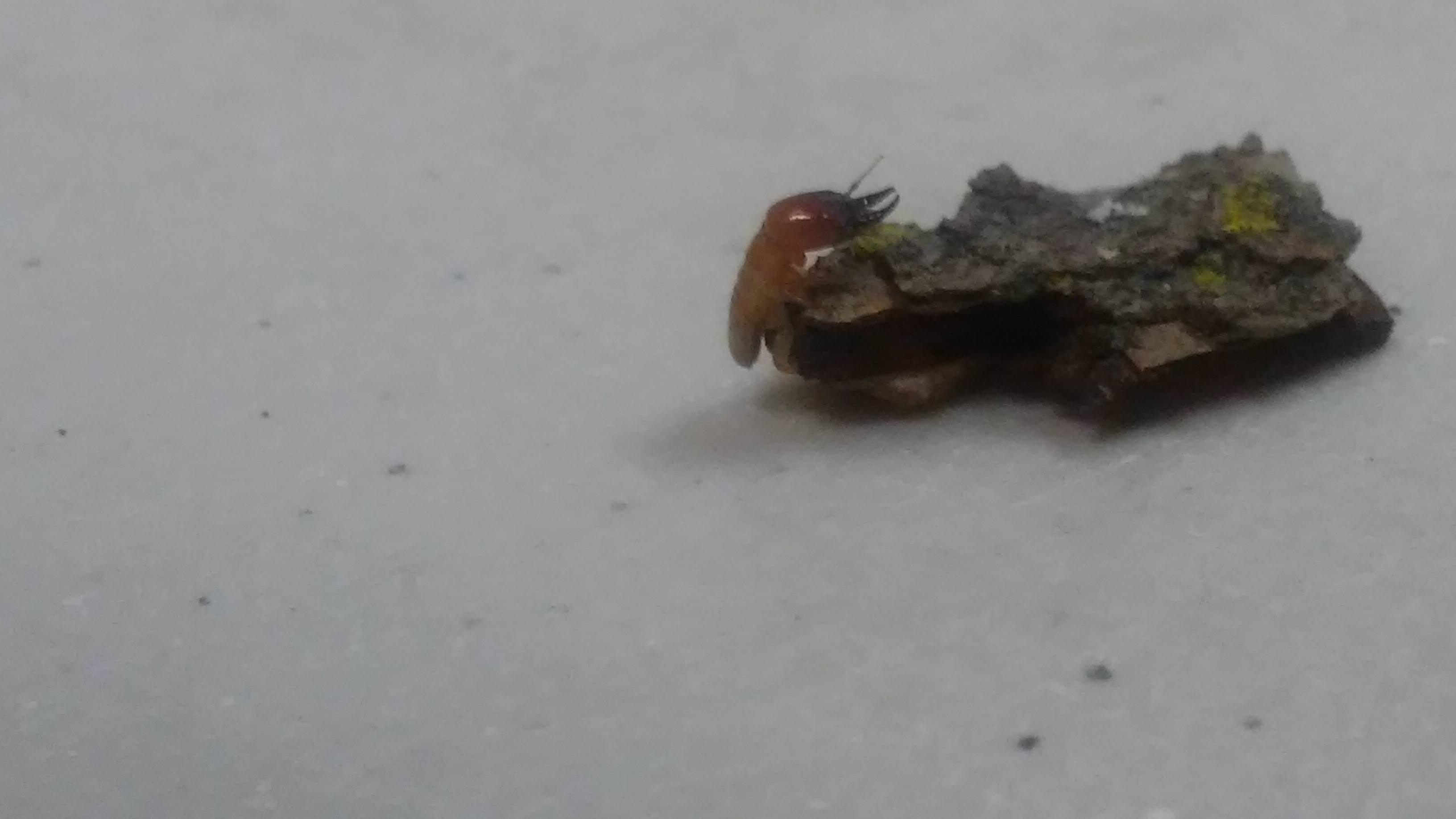 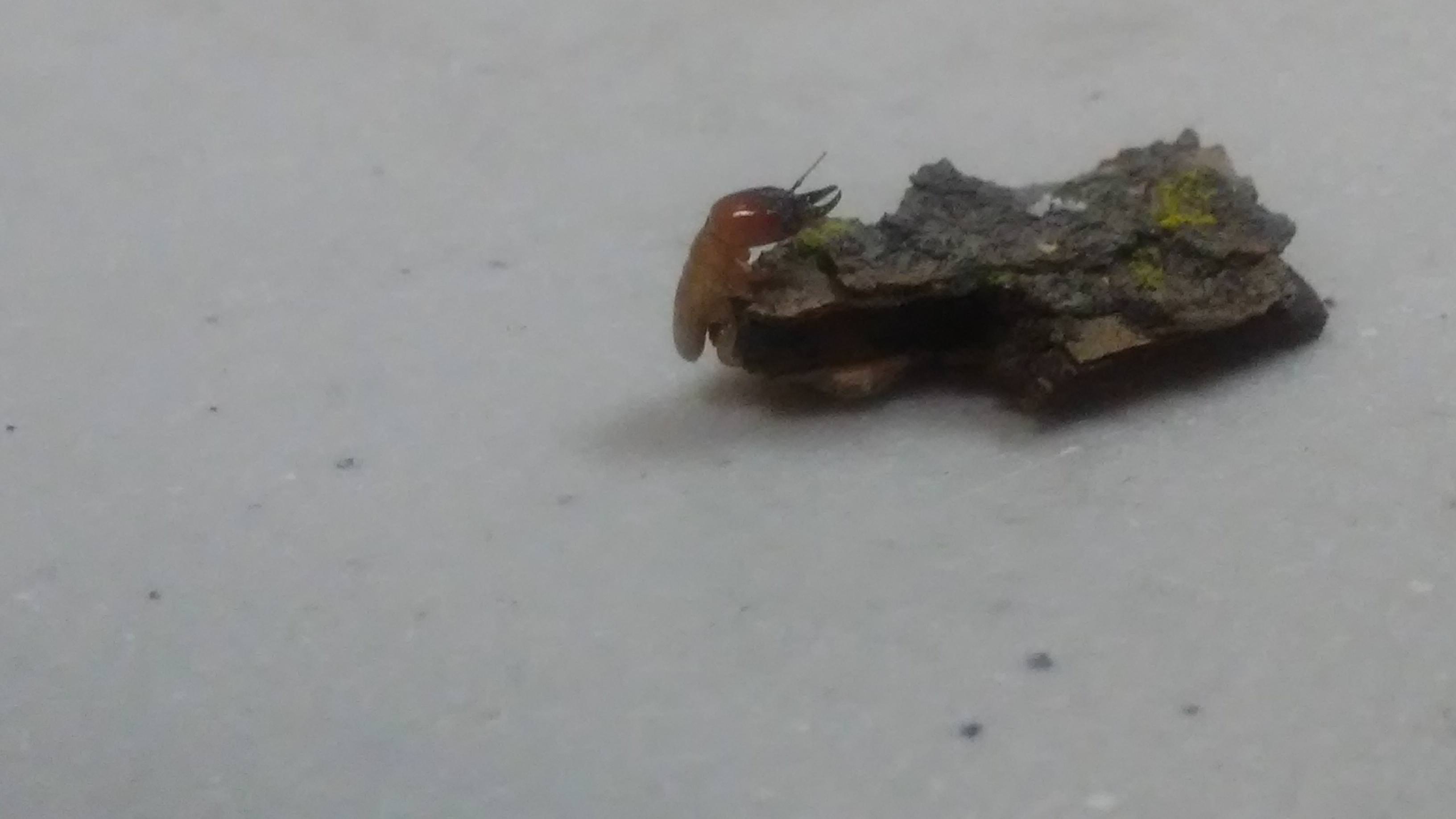 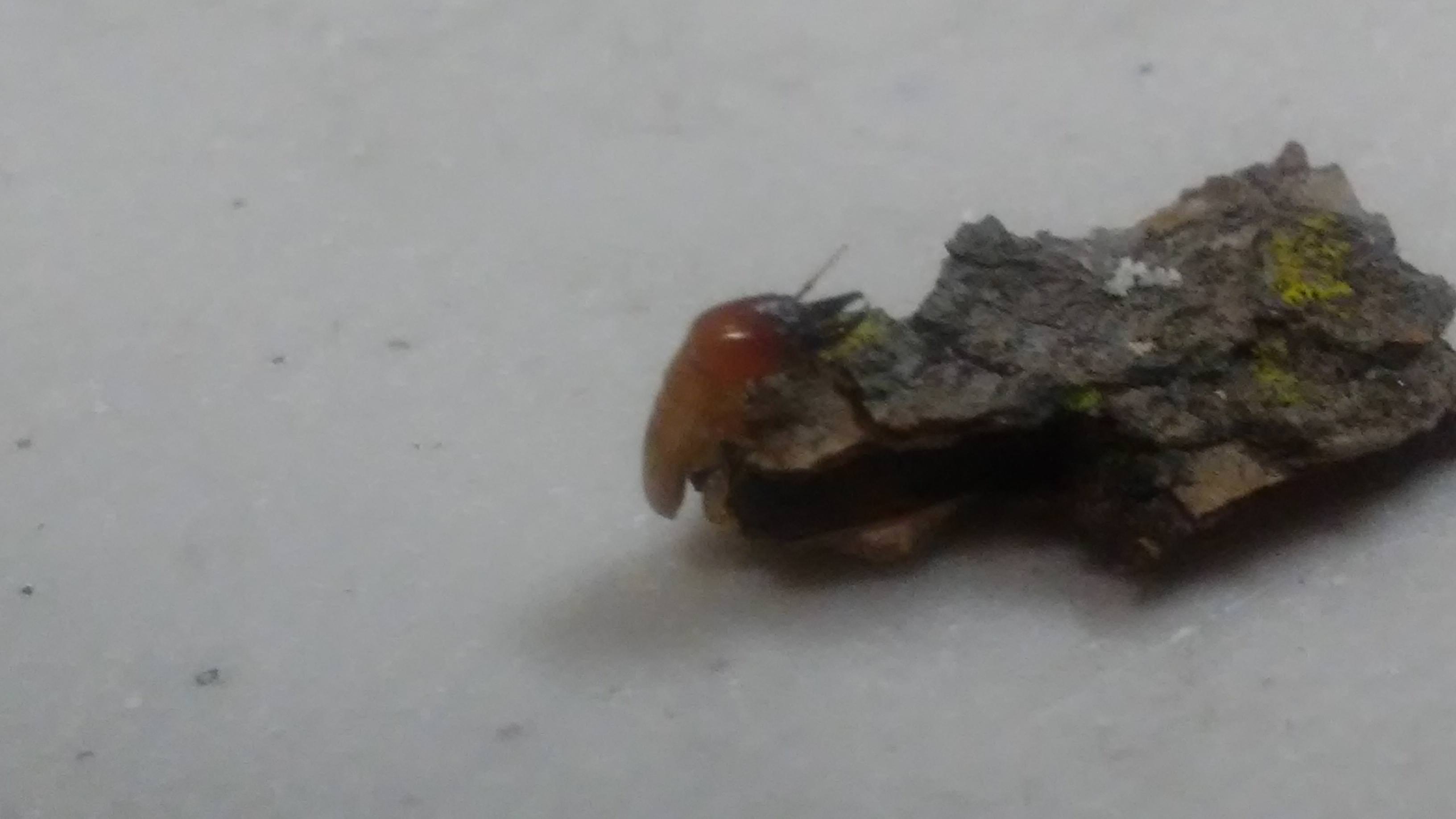 yeah, I think they are different from my colony. Your soldiers have sorter abdomen while mine are longer abdomen, also your soldiers the back legs have thickness or mass and are longer while my soldiers are sort and a little thick. I think you have something unique and very cool termites. Here are some of my soldiers picture but I'll try take better picture of mine in the daytime and compare them more later with better day light. 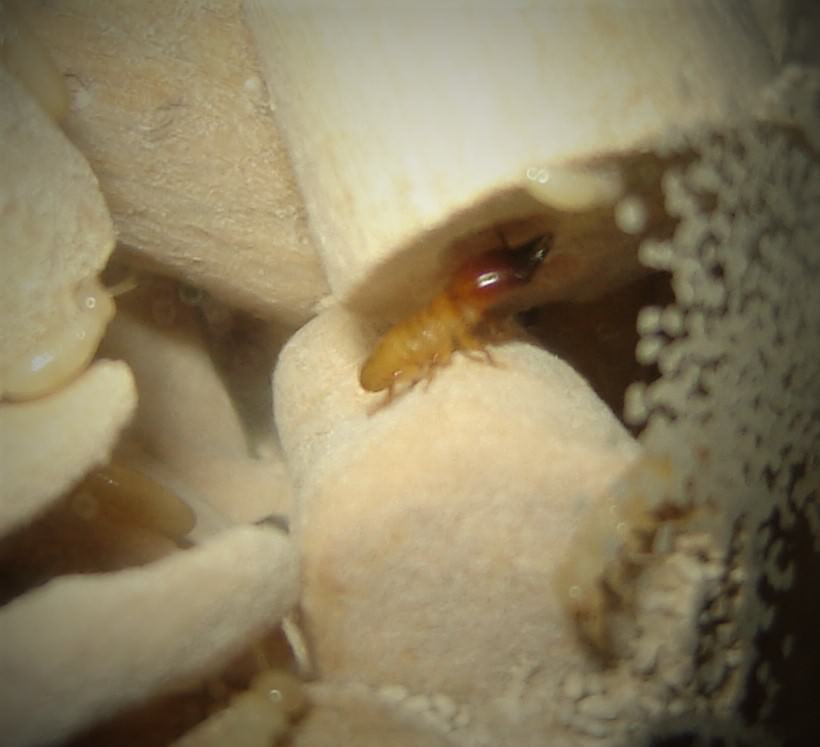 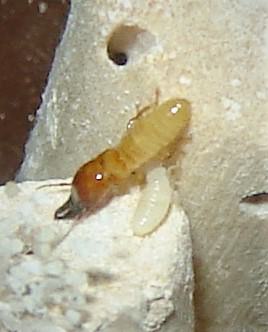 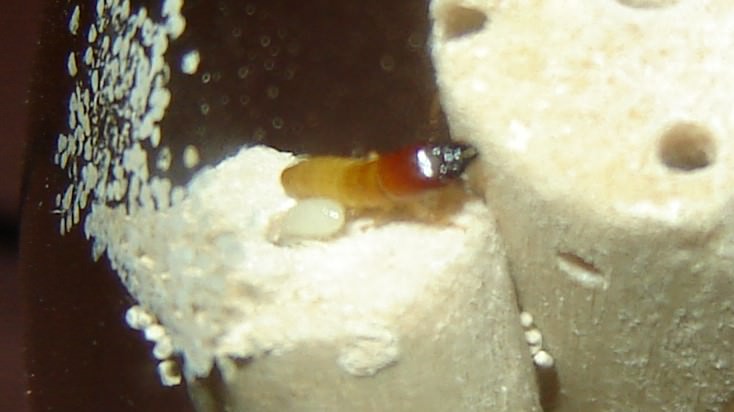 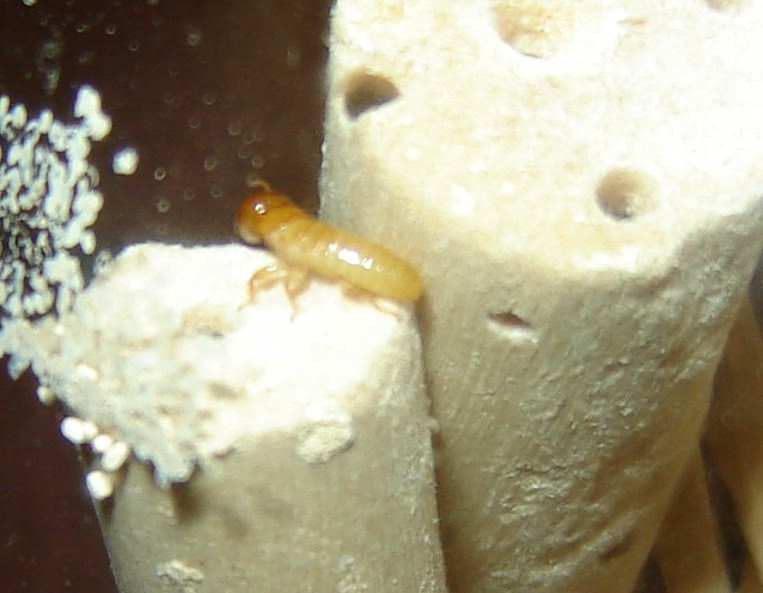 These are supposedly "only" found in Arizona, but only one collection and I can only find one picture of them. And no other info at all. But, they kind of match. What do you guys think?

I'm thinking they probably are Incisitermes arizonensis. What really standout was there leg thickness on the first picture post of your soldiers. They match the soldier type. If we can find more picture we can confirm it more with the upward curve jaws we show on your other post. 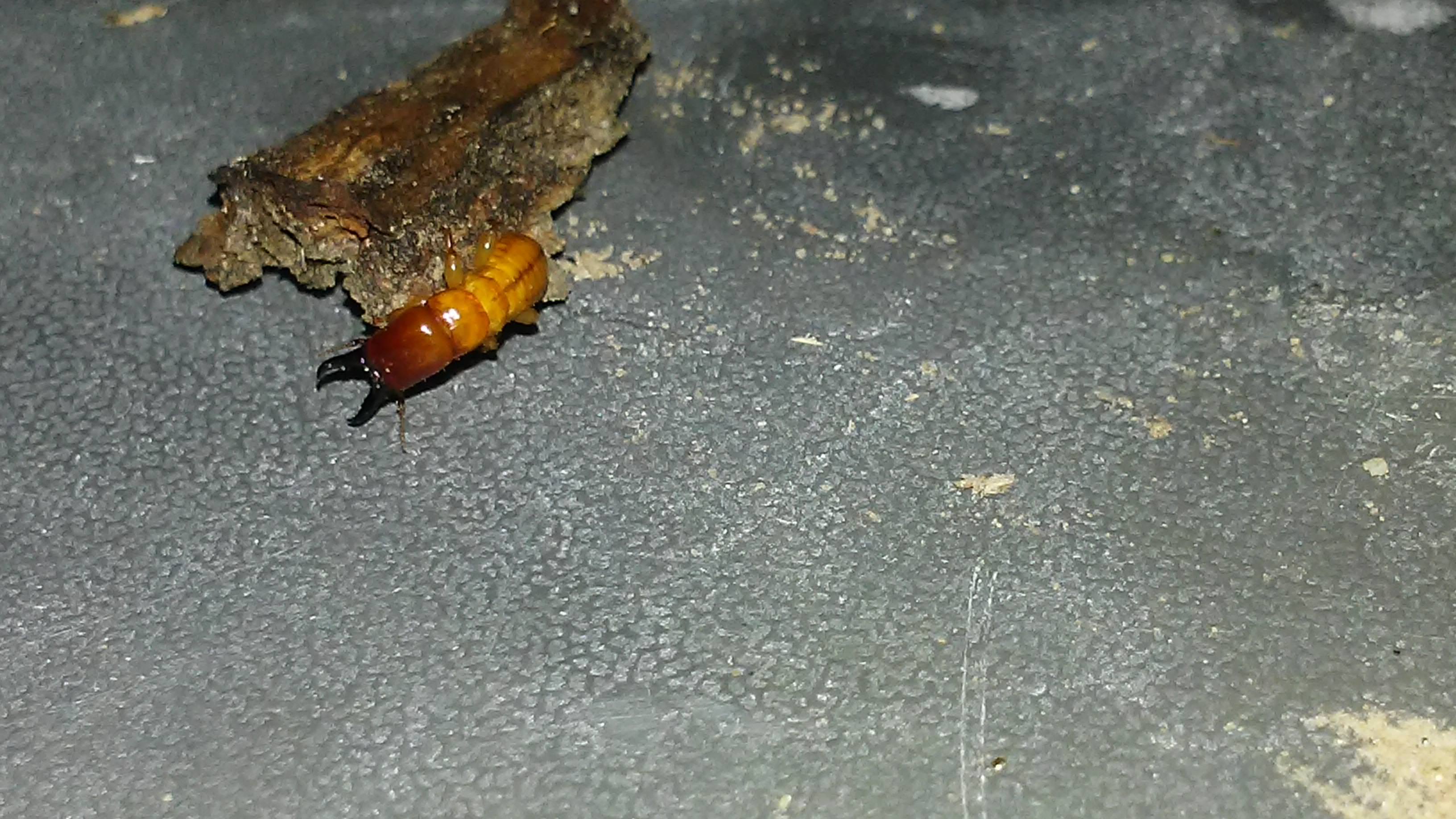 Closest my phone can go...my phone surprisingly gets really close for an old phone

I also edited the brightness/glow with photoshop, and one pic I decreased the noise. One pic I left as it was.

Also the upcurve on the mandibles is almost unnoticeable, so I think before it was the angle the soldier was at. 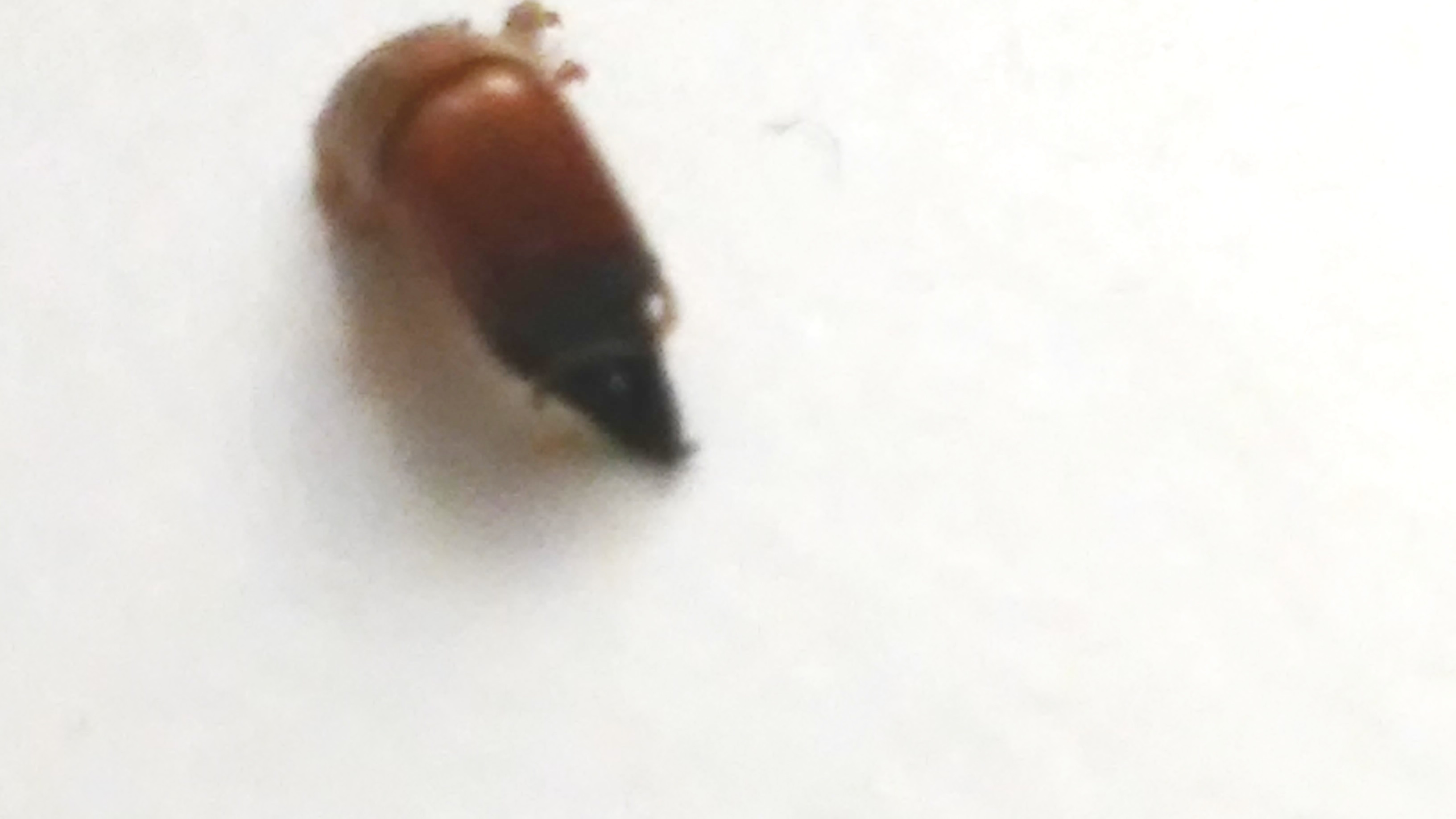 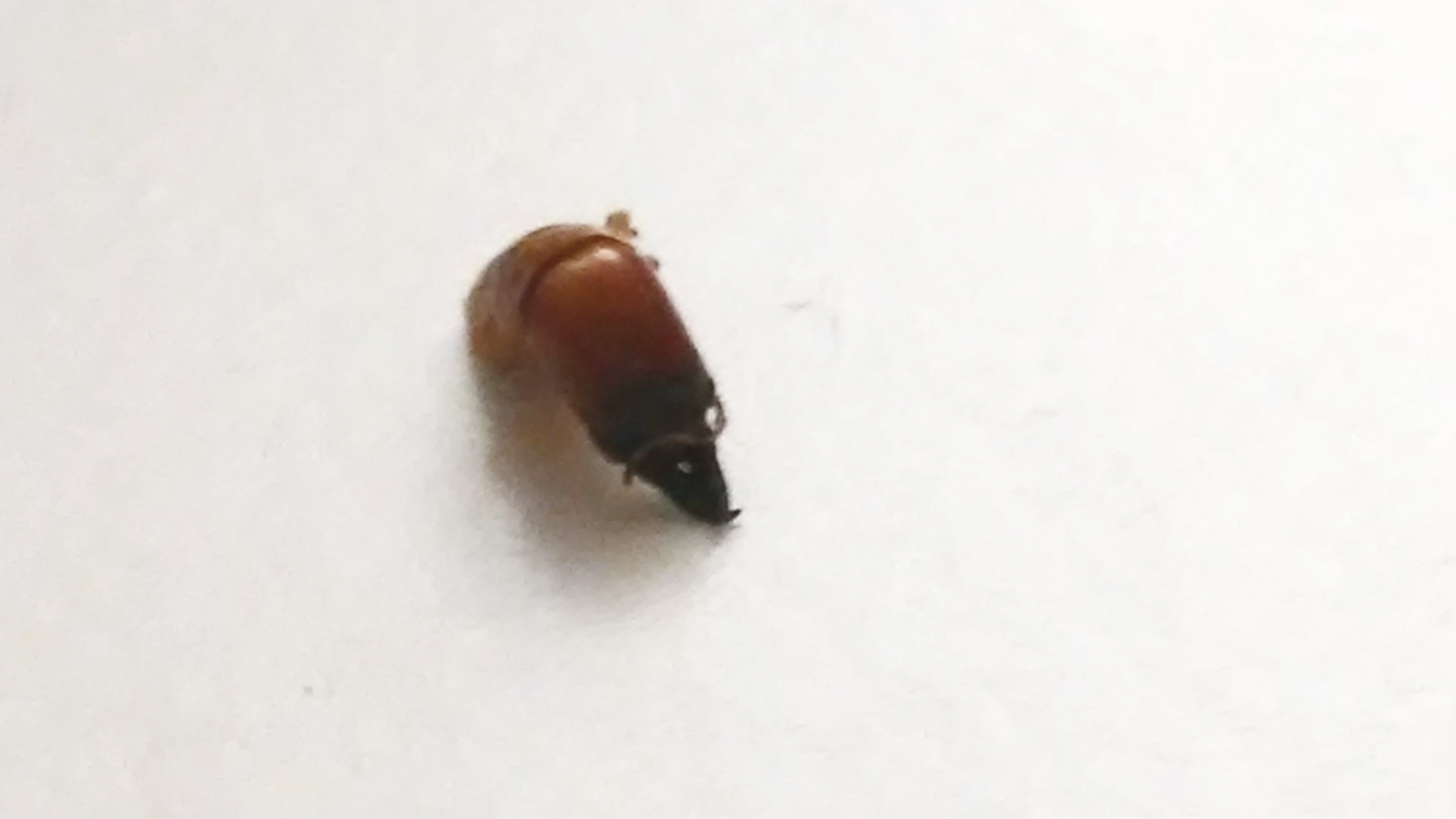 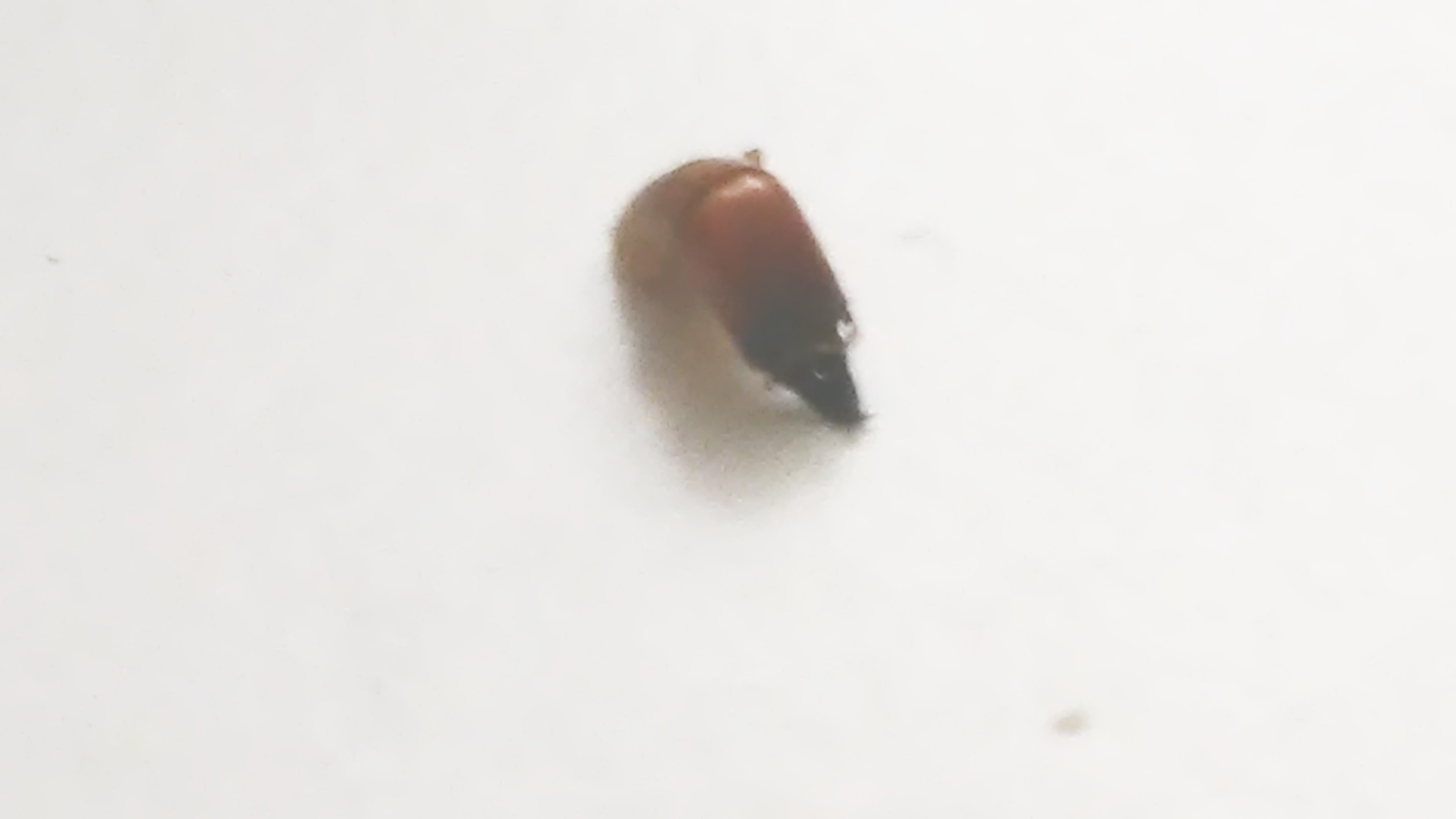 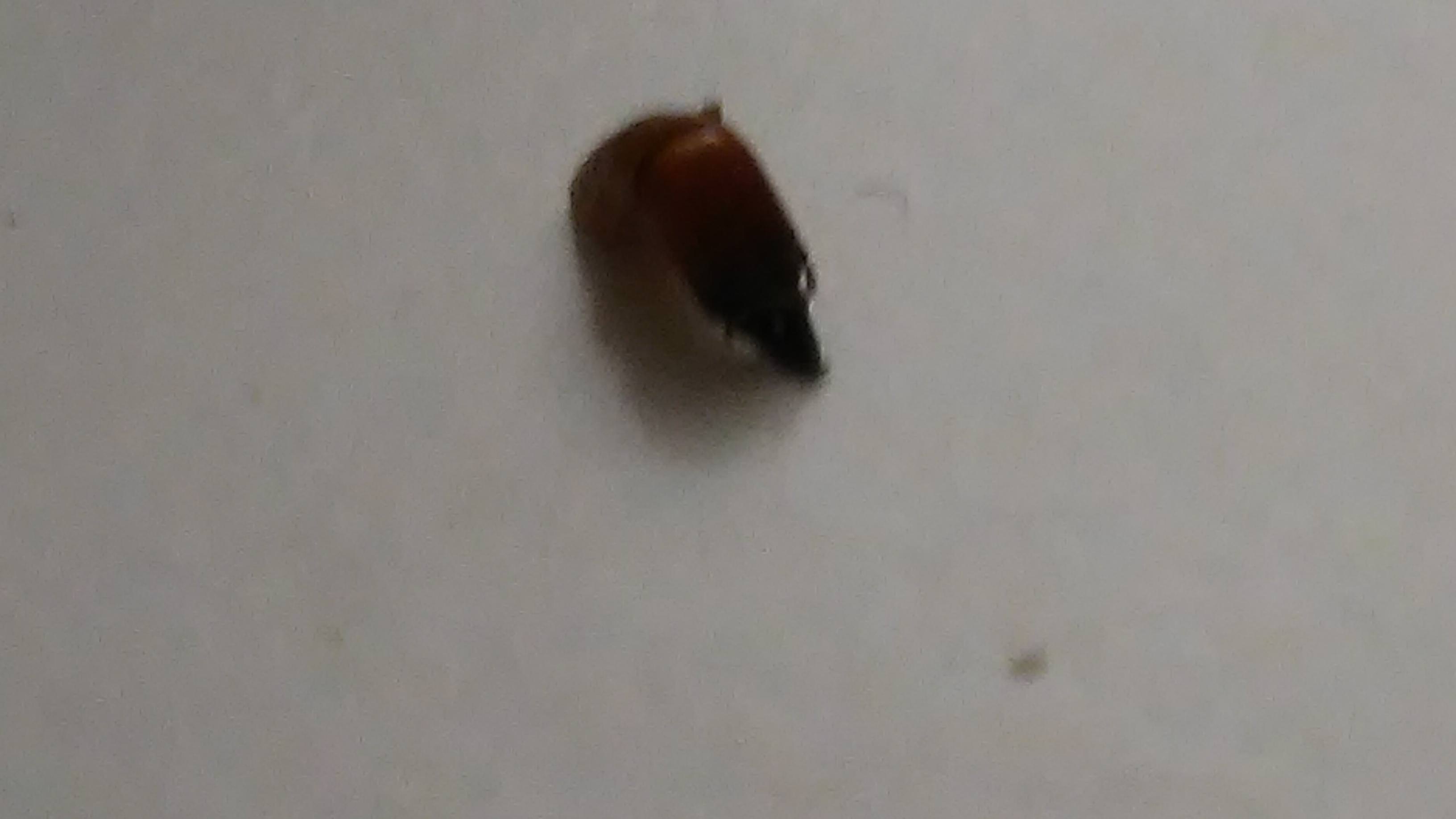 Today (10/14/18) I got a second colony of whatever genus and species they are. Tomorrow going to go back and see if any may be in the soil itself (which is how I'm thinking they are getting into the pieces of wood on the ground) or in smaller pieces of wood that are laying around the tree. But, I got a lot and they even make actual trails (I don't imagine they'll make mud tunnels as never seen that behavior with them) like subterranean termites do which is neat.

I'm keeping them in a plastic aquarium (its best I have, don't have anything big enough made of glass) with plastic wrap over them (enough air gets in/out still). The setup I'm keeping really damp, because obviously whatever they are need a lot of water. I've seen them thriving in rotten wood so wet with water that it drains out of the wood. This particular species of termites dry up super fast (over night I always end up with a bunch of dried up termites) so their setup can't dry out at all as for my experiences with them. I plan to hydrate the nest multiple times a day, since they do not do well at all in a dry setup.

As for number of termites. I must have got a lot with this new colony, but I couldn't say the exact number. They are very active though. Keeping them in a damp and cool but humid setup has increased the activity a lot; compared to my previous attempts at keeping them.

I'm going to wait for official word from GCsnelling, but...

Almost certainly to be these. They have been found right exactly where I live, in same exact river and same general area. The alates actually match too. Though the ones here seem to take on a more red appearance, other pictures I've seen of them they look different.

Got more termites for my colony.

The colony is centered in a shaded area (only partly sunny, but mostly shady and never full sun). They are also far easier to get after a rainstorm but Incisitermes minor probably be the same way. But, I keep finding sticks and branches filled with them on the ground.

Also that Nathistoc site seems like got pictures mixed up like LC3 pointed out in chat. But still waiting to see what G C Snelling thinks they might be.

Here are some alate pictures I took. Yesterday the wood I got must have been filled with alates, even though it was rotting wood on the ground. I sent these to G C Snelling and LC3 as well. Also not best quality, cause I had to hold onto the wings since didn't want them flying in the garage.

But I'm finding a ton of termites of these on the ground in pieces of wood. 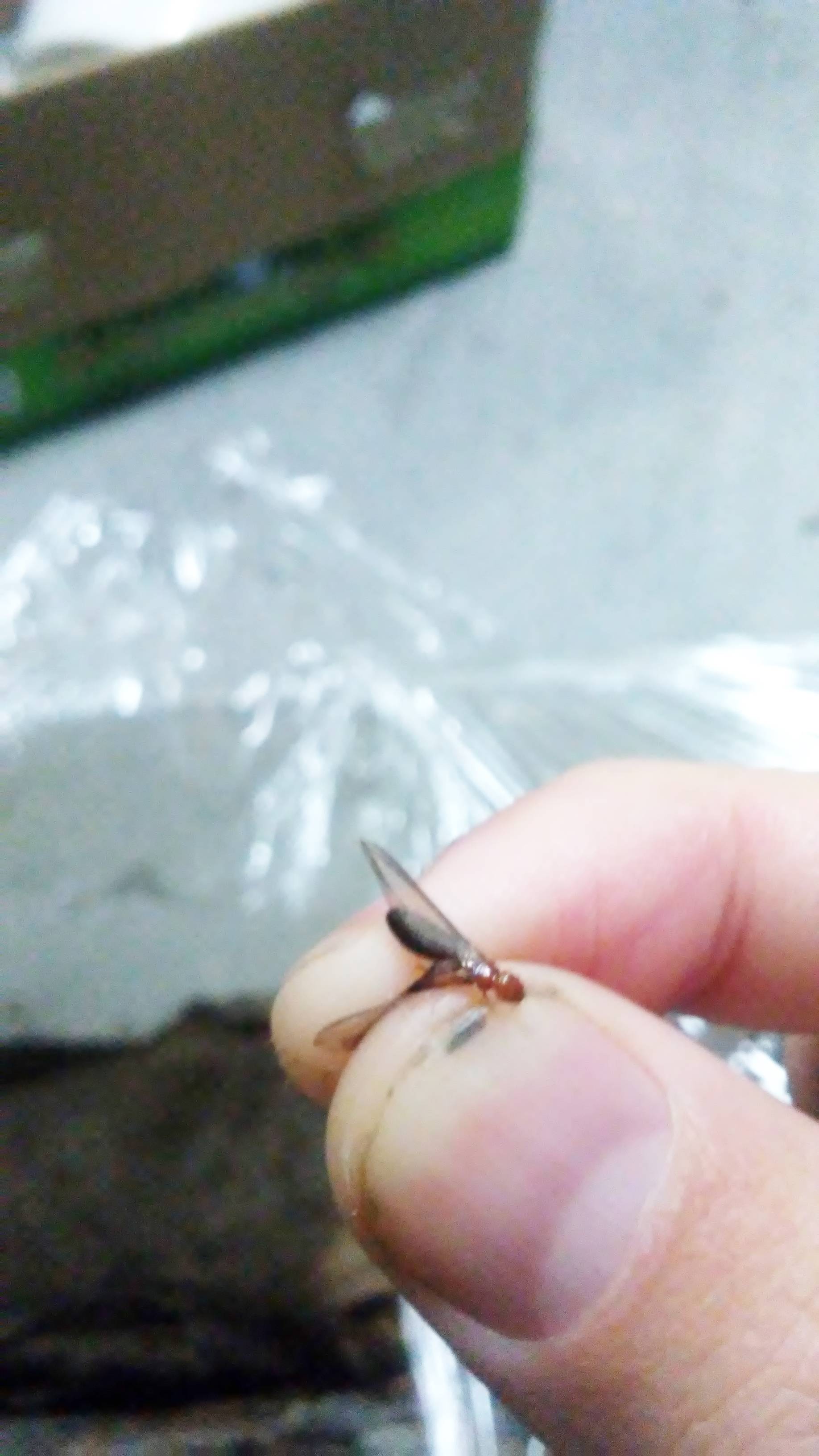 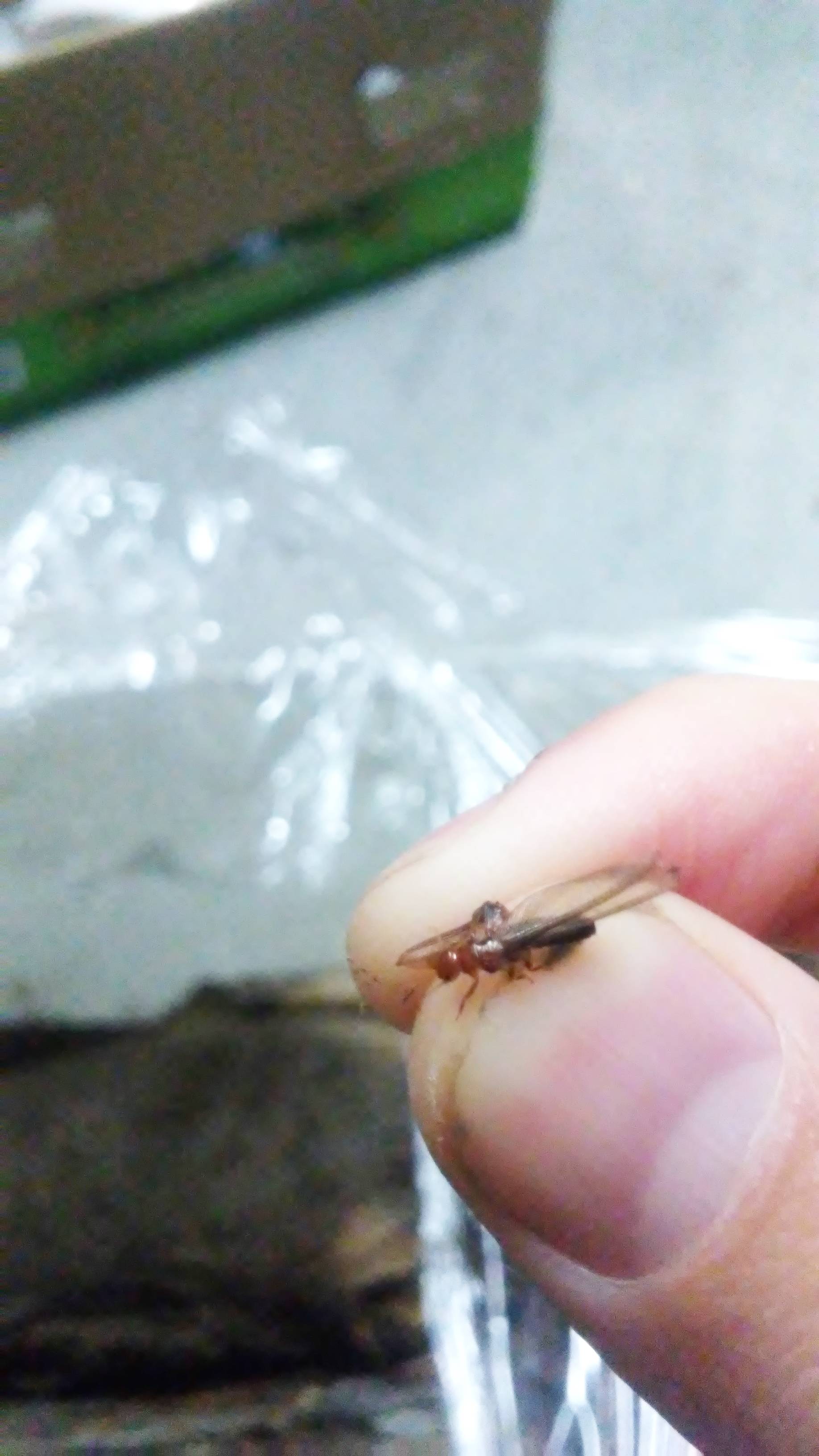 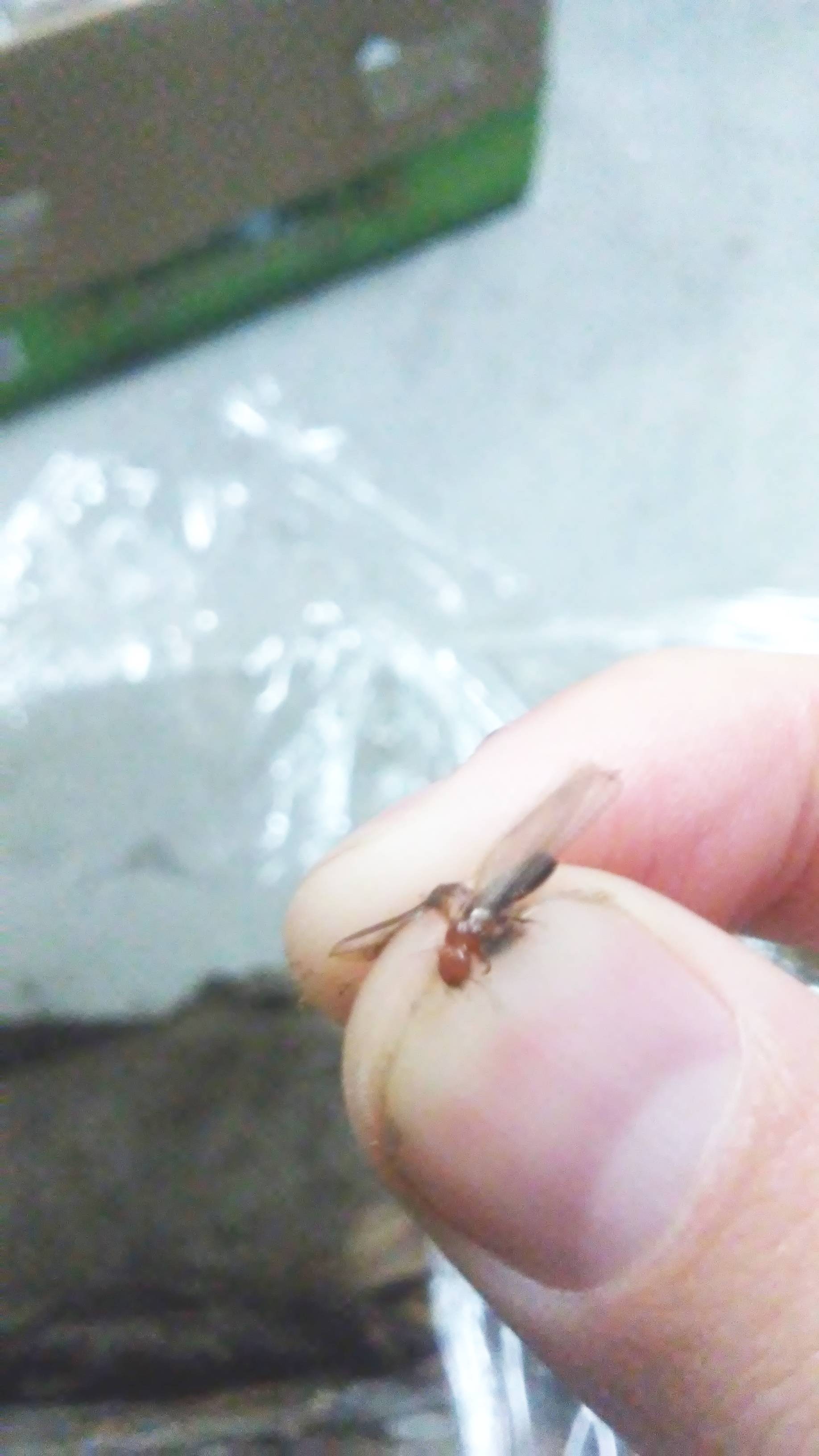 Got more termites today. It'll have to be the last pieces of wood I get, since no more room for wood. But, they are surprisingly easy to get, as I keep finding them on the ground. The colony must be huge from wherever the main colony is.

Boy, these sure are an enigma. They look so much like Incisitermes, but their need for hydration is baffling. They remind me a bit of a termite I'd seen some footage of, I think it was called Margerinitermes or something. I think they are dampwoods - if I can find the footage again, I'll be sure to send it.

Boy, these sure are an enigma. They look so much like Incisitermes, but their need for hydration is baffling. They remind me a bit of a termite I'd seen some footage of, I think it was called Margerinitermes or something. I think they are dampwoods - if I can find the footage again, I'll be sure to send it.

Yeah, they do look a lot like Incisitermes. But, I've only been finding them in wet wood and mostly on the ground in rotting wood. Even if its like LC3 thinks that they adapted to irrigation, that is still weird they suddenly aren't really "dry"wood termites anymore and dry up super fast.

I don't think they are Zootermopsis either. My guess its a dampwood termite of some type, but not Zootermopsis.

I also have a suspicion they travel on the ground or/and dig in the soil. I'm finding too many of them in rotting wood ON the ground, meaning they are actually going to the wood on the ground in some manner. This also means a piece of wood I broke a month ago (that was 100% empty and was laying on the ground) and then this month after the rains, it became filled with termites, was correct. That in itself almost crosses off Incisitermes minor, since that is not their behavior to do at all.

My own colony I did notice, actually does explore on the ground to get to other pieces of wood. I haven't seen digging, but they do travel on the ground. Which goes back to probably why I see so many termites in wood that is laying on the ground.

So, unless G C Snelling thinks otherwise it seems LC3 is probably right with Incisitermes minor. They are just an unique type of them that adapted to wet conditions (like they must have done in Florida). Still cool cause they adapted to a wet environment which is unique for I. minor. Unless Snelling says otherwise, we'll go with that.

Here are some pictured of the alates.

Seems like this one soldier proves that it isn't Incisitermes minor. The soldier is a beast! It would make Pogonomyrmex californicus workers look small.

Sorry for lower quality, I got super excited seeing such a massive termite. 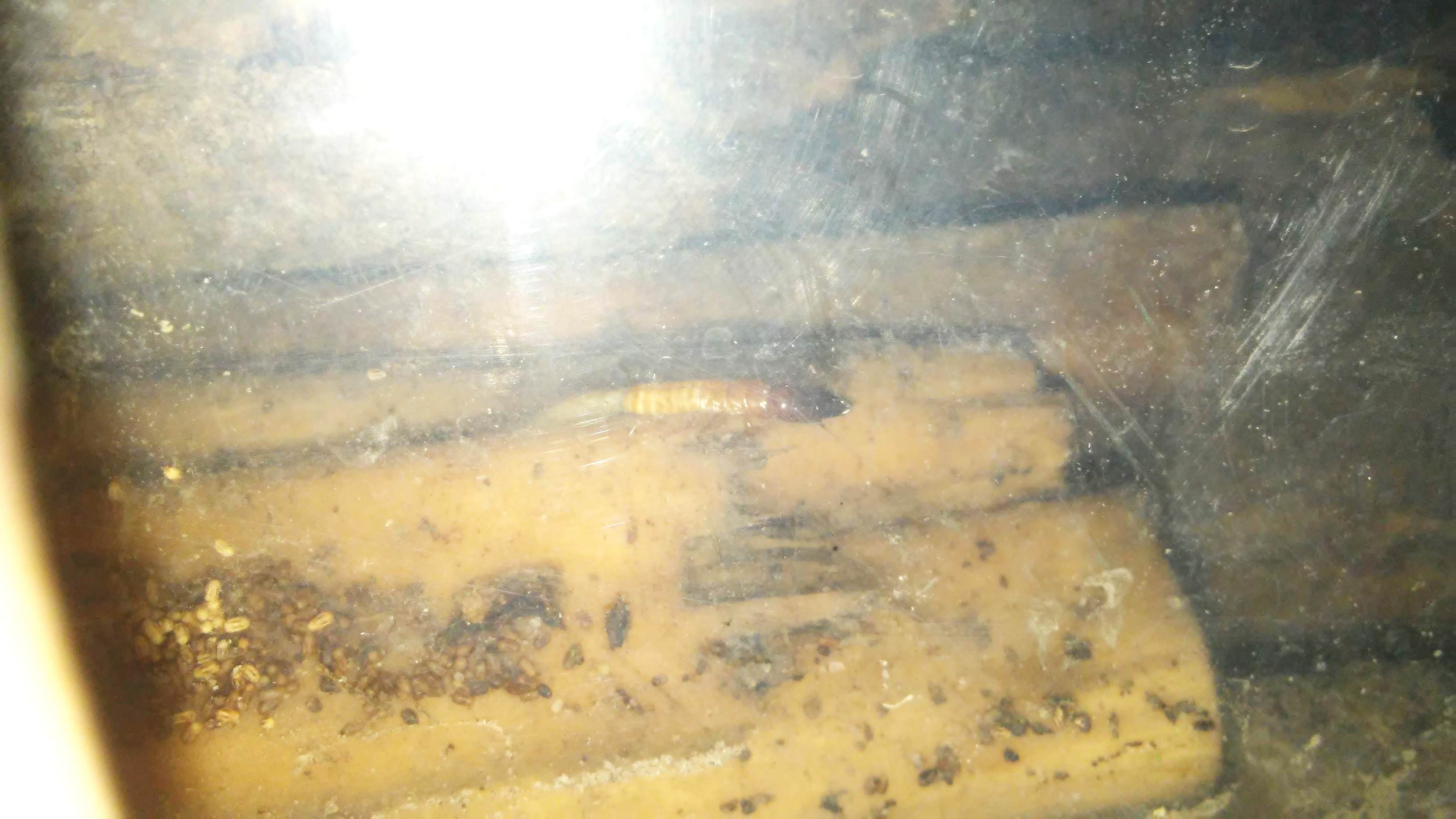 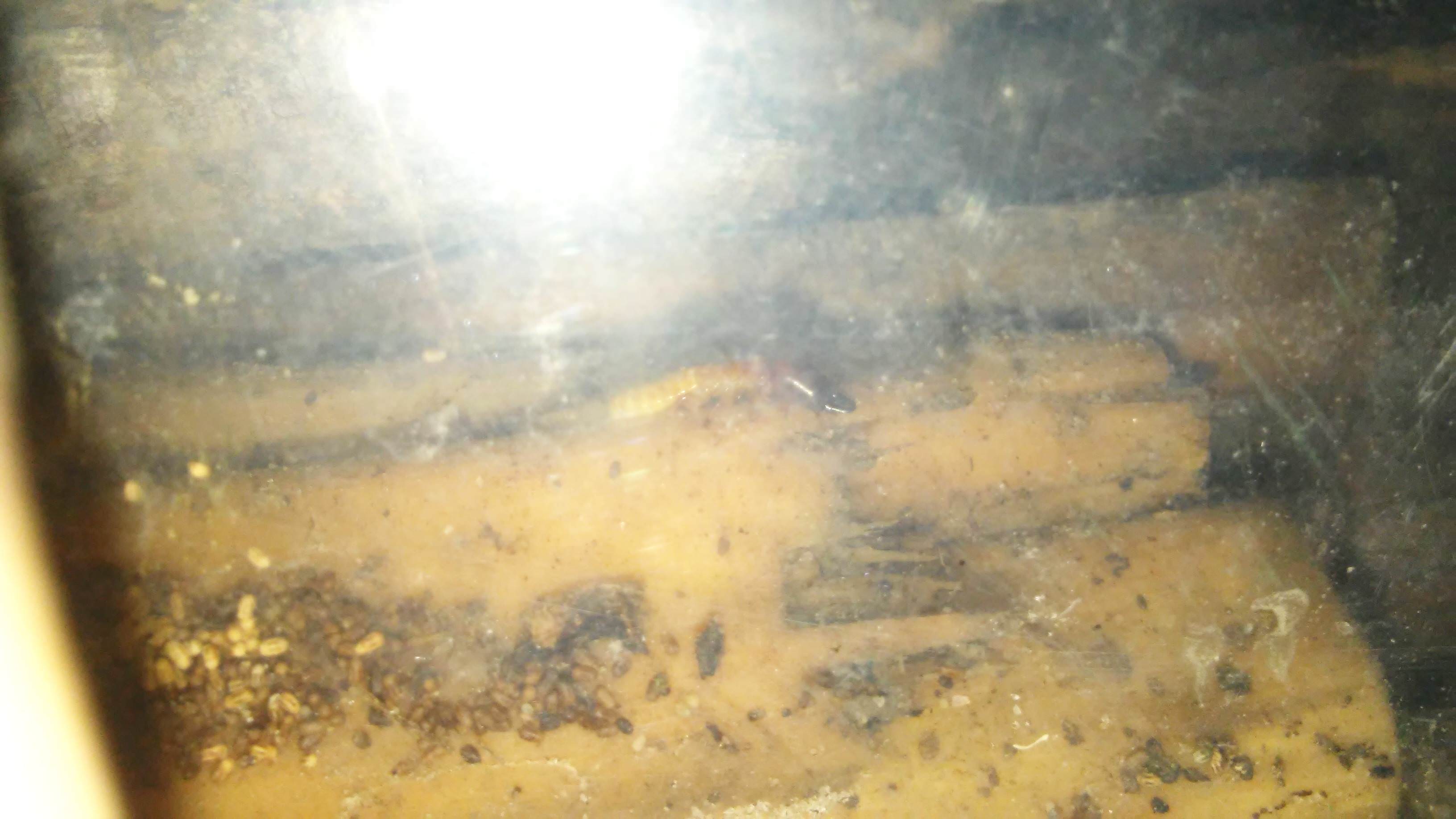 When I get a new 10 gallon aquarium (hopefully tomorrow), I'm going to fill the bottom with dirt on one side and let water sit in a small pool. It'll probably just end up mostly muddy, but these are the conditions they seem to like in their current setup. And outside, I've found them in wood so soaked with water that the water drains out of it. And the termites were thriving in it. So, I'll try to simulate those conditions. Plus it'll be easier to maintain the dampness they seem to require, without it risking the setup drying out.

Surprise. My termites can climb mostly smooth plastic, and they are kinda big termites too.

Imagine my surprise when I saw one of them on the lip of the aquarium hanging upside down. Luckily I saw her cause she'd have fallen and dried up or/and got lost.

That is an interesting challenge I never had with termites...

Not just the aquarium either. They climbed drew's dirt box when I tried putting a few in to see how it would work. And that plastic is even more smooth feeling. I thought maybe it was the dirt box, but nope. They can climb...

Since my termites can apparently climb...

I'll probably just custom build a termite aquarium. I'll use polycarbonate though cause termites can't chew through that.

If I bought a 10 gallon aquarium, not only is the quality kinda junk...they can easily climb out through the corners covered in aquarium glue. And 27 dollars for a junk aquarium is kinda a rip off when I can build a better one myself for same price or cheaper. Plus I like polycarbonate a lot more than tempered glass, its much higher quality, doesn't break or warp and actually pretty cheap to get.

That's really odd - as far as I was aware, only some Kalotermids had "sticky feet". I suppose a barier would work, but I'd be careful about what I use - because they're so delicate, I'm sure that some barriers could really bother your termite's epidermis.