Here's a peculiar species of Colombian termites from the Rhinotermitinae subfamily described just a few years ago: Acorhinotermes claritae!

While in the closely related and often sympatric genera Rhinotermes and Dolichorhinotermes there are two very different forms of soldiers, with the minors being armed only with a labral brush (about which i'll talk later) and the majors relying mainly on a robust pair of toothed mandibles, the whole Acorhinotermes genus lost the latters during its evolutive process and all its small but very agile soldiers solely employ the labral brush to fight; this makes them the only non-Nasutitermitinae termite genera that i know of whose soldiers all possess fully vestigial mandibles and rely wholly on chemical defence.

But what's this "labral brush" we just spoke about? It's a peculiar defensive adaptation formed by an heavily modified labrum (a structure present in all termite soldiers, but usually much less prominent) shaped like a long horn whose enlarged tip is covered by very fine but numerous hairs. Just above the base of this labrum there is an hole, the fontanelle, from which a toxic defensive fluid produced in the frontal gland is secreted and due to gravity flows towards the tip, where it is captured and accumulated by the fine hairs present there... at this point, all the soldier has to do is to "paint" it right onto an enemy! Unburdened by large, robust bodies and massive heads, these tiny soldiers are not only very agile by termite standards but can also be produced and mantained in high numbers, and make for higly effective defenders for their much larger workers! 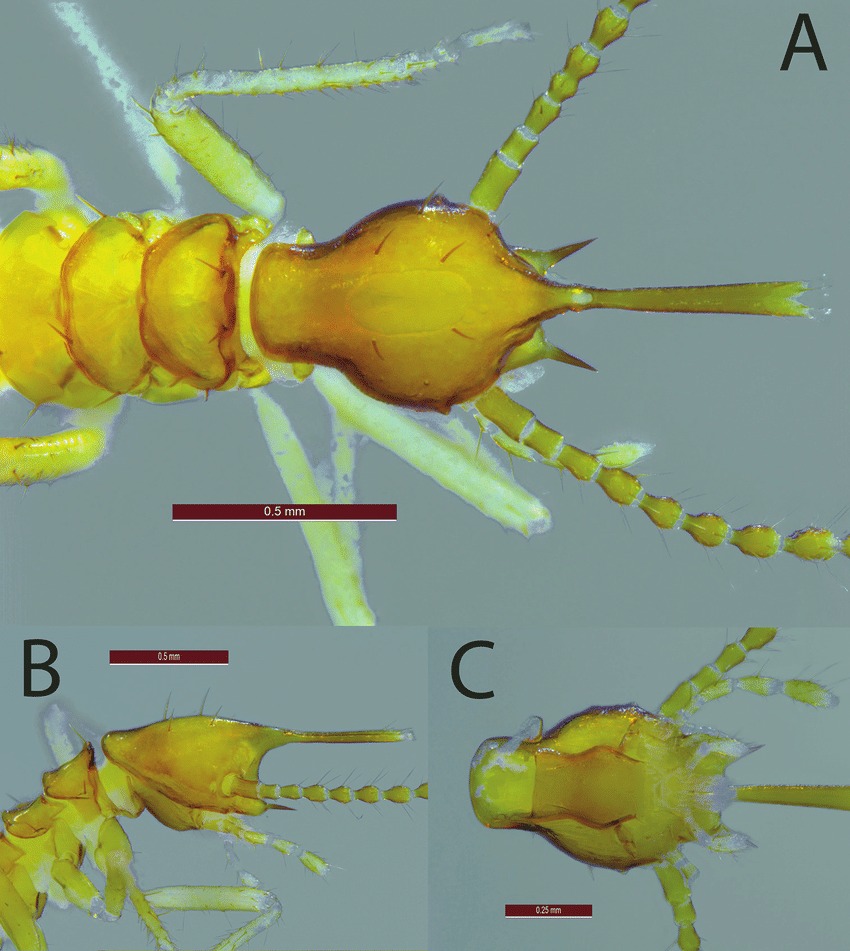 Alcohol-preserved soldier of Acorhinotermes claritae. You can clearly see the long labral brush, the hole near its base from which the defensive fluid is exuded (called the fontanelle) and even such fluid's reservoir inside the alcohol-faded head as a lighter spot on the dorsal side. These two pointy "spikes" near the front of the soldier's head are its mandibles, in this case fully vestigial. All in all, quite a peculiar critter!

Well, see you again at the next Corner!