Ant Fiction: Dotty the Ant Who Would Change the World.

I'm working on a story about one of my ants. He name is Dotty since she has a white dot (from paint) on her gaster.  Here are some digital paintings I did of Dotty: 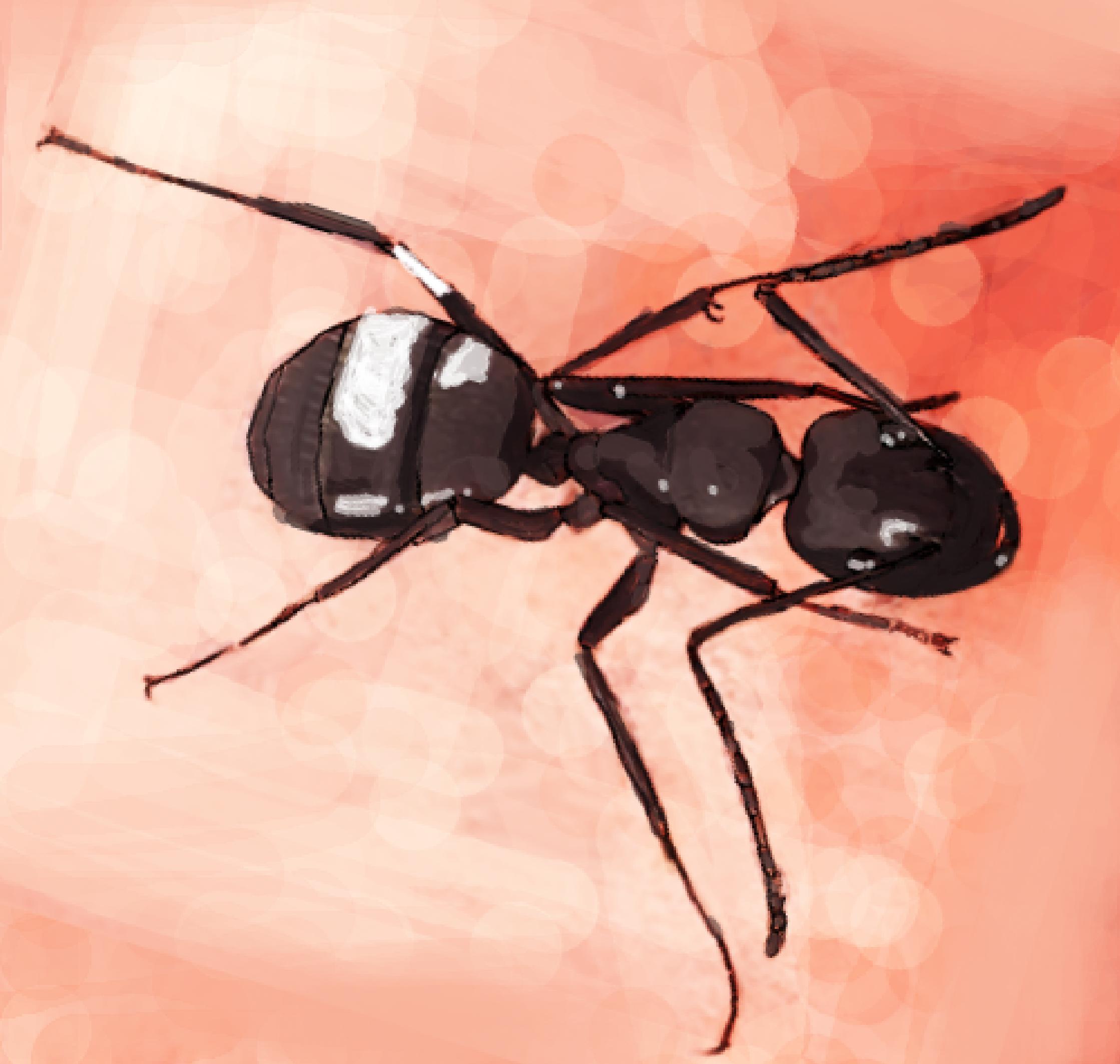 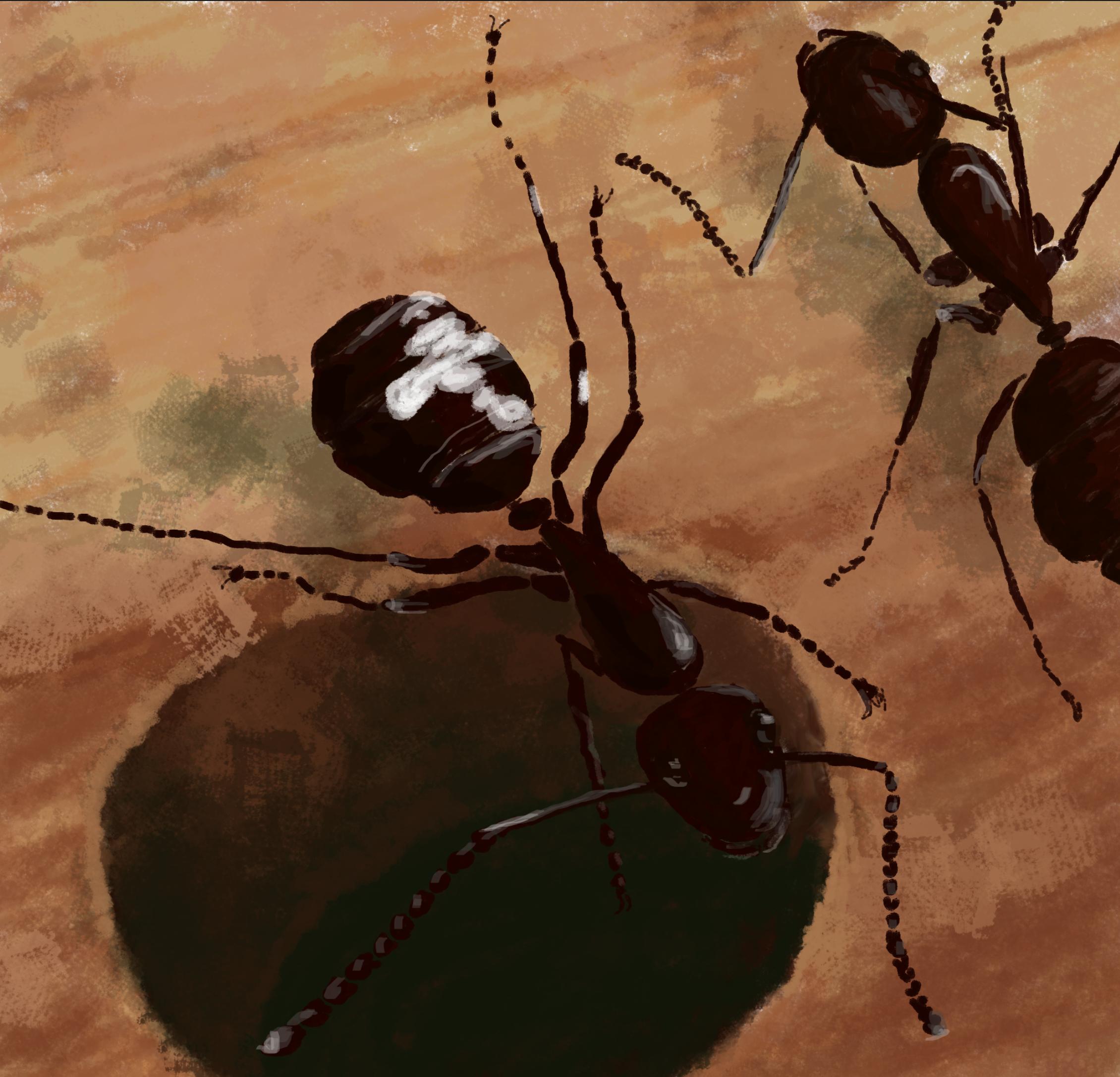 And here is how her story begins:

Dotty knew that taking young ants out for the first time was something of an honor, but, like many, colony honors, it felt a little more like a chore. Today her students consisted of a tall broad mandibled major, and a median. Both of them so young they still smelled like silk cocoons. The major, destined for a life of soldiering, still seemed a little gray in the joints, her exoskeleton not fully hardened.

But, her pupils were eager and relentlessly attentive. They loomed over Dotty, who was just a minor worker and a small one at that.

“You’re a solider!” Said Dotty “You don’t get to be scared.”

The major stopped her fidgeting but didn’t seem any more confident.

“Listen,” Said Dotty “There isn’t really anything to be scared about. It’s not like you’r going Outside.”

“But I thought we were going outside!” Said the median, obviously disappointed.

“You are going out of the nest, true, but, what lies beyond our nest isn’t the real Outside. To get to the real outside you have to go beyond the slippery walls… On the other side of this tunnel is just another kind of inside, even though most of the ants in this colony are to simple minded to realize it. It’s another closed space… but, sometimes… it’s possible to go beyond.”

“So many things.” Said Dotty. But, she realized she wasn’t doing a very good job of teaching. These young ants didn’t need to worry about mysteries like “beyond” or outsides that were really insides. Not yet at least. It would be enough for them to make it to the water place and the sugar place without flying into a panic or shutting down.

“Don’t worry. That’s what matters. We are going to be perfectly safe.”

The major seemed to really like these reassuring words. Since they seemed ready, at last, Dotty lead them to the exit of the main nest.

Like most young ants leaving for the first time they paused at the threshold, sensing changes in the air currents, the new smells, the lights. Was she ever so cautious? Dotty wondered. She must have been. But that was long long ago.

The minor worker got over her fear and marched out on to the sand to stand by Dotty, but the big major was still holding back.

“Come on! We don’t have time for nonsense!” Barked Dotty.

Caught between the scary outside, and scary angry Dotty the major decided that Dotty was probably worse, and she ran out to meet them, immediately huddling in the sand, trying to hide.

“Come on stand up. Look around. You’ll see it’s not such a big deal.

The Major stilled her nervous leg wobbling and came up out of her crouch. She lifted one antennae nervously, then the other. Only after sensing no danger did the big ant lift both high, looking around.

All around them ants were busy. Collecting food, moving brood, walking on guard duty. The activity made the big open space feel less scary.

Just when the Major was starting to relax— disaster struck.
The ground and sky vibrated. The sunlight first dimmed then brightened. The earth rumbled and a terrible CLUNK sent all of the ants, even Dotty, into a panic.

Some ran back to the nest, others hid behind rocks and in corners. Dottie's students tried to hide behind her. Which wasn’t the best idea since they were both so huge.

“Listen” Whispered Dotty to her pupils. “Look up…”

“You are very lucky students. This doesn’t happen often… but I know that when great shapes move in the sky it’s possible to climb the slippery walls and sometimes the sky barrier isn’t there… sometimes… you can go outside… for real.”

“Shhh…” said Dotty “Just stay still and see what you can learn about the mysteries of the world.” But, the Major was overwhelmed and Dotty realized someone would need to carry her back inside. Probably, it would be her…

Dotty was very tempted to climb the slippery walls right now and see if she could escape again.

But, doing that when she was supposed to be teaching young ants would be very irresponsible. So instead she watched; the great looming shape was coming closer.

With a terrible thud a massive chunk of apple landed right next to Dotty and her students. The great sky shapes could mean good things… or bad. It seemed that today they meant apples.

“Investigate that food!” Dotty said to her students. The median worker jumped to the task, but the major was still paralyzed with fear. “Listen I gotta take her back.” Said Dotty. The median nodded understanding.

And with that Dotty decided that school was over. She lifted the major with ease and and got her to the entrance of the nest. Getting her big body through the door was tricky but with the help of some of her sisters they managed.

Would such an ant ever make a proper solider? She wondered.

Would she ever get another chance to go beyond the sky barrier?
Thinking of the Major poorly wasn’t fair. Real outside scared Dotty as much as fake outside scared the poor major.

“Someday soon!” Thought Dotty still gazing at the mysteries above.

Please release a book on this! It's awesome!

Check Out My Pages!

this is excellent!! i love xenofiction and have been craving something like this for ants. The paintings are great too, i love your style.