29 replies to this topic

@That_one_ant_guy good question, it would depend on the quality of the agar, and the concentration. But in general the gel starts to become softer at 50C, starts to melt at 80-ish C, and completely melts around 100C. Since you probably won't keep your ants hotter than 32C (I assume that is kinda the max for most ants?) you'll be more than fine, without worries the gel will melt.

@Formiga Hey man! Thanks for your interest. I love the idea to use it as an emergency protein supply for rainy/cold days.
And I had no idea that you used gelatin in old photography too, that's pretty cool:P Why did they need too use gelatin?
Regarind your queen ants, too bad they died! They would've been great for testing. Perhaps next nuptial flight I can send you some tubes so we can test it together?

Awesome! Great to see your interest.

1) This morning I put honey on a little plate into the tubes. The reason behind this was that I wasn't sure if they ''liked'' to eat the gel. Both colonies quickly discovered the honey in their tube, with a scout ant running back to tell the colony in both cases. Both colonies responded the same: nothing. Neither the scout, nor the other workers went and ate the honey. Looking at their fat little ant buts, it looked like they were filled up already.

Preliminary conclusion: The gel feeds and satisfies the worker ant cast. Or the honey was bad.

2) This afternoon, I saw the ant queen of the Purple Murp sovereignty stuck in the gel. She bopped her butt in it, and couldn't get out on her own.
The rest of the colony seemed lethargic too.

Based on this, it seemed I have to increase the agar concentration, to make the gel more of a solid. I'll keep that in mind for the next batch.

Because the queen was stuck, I had to move the colony out of the tube, just to make sure she wouldn't get stuck again.
I made the relocation to a new home into a little experiment.

I bopped the colony into a quickly made outworld. After the initial shock of getting bopped, the colony had to make a choice:

(Both tubes were covered up, so they'd be in the dark)

(I used a different purple medium tube than the one they were in first. Wouldn't want pheromones leading them straight back) 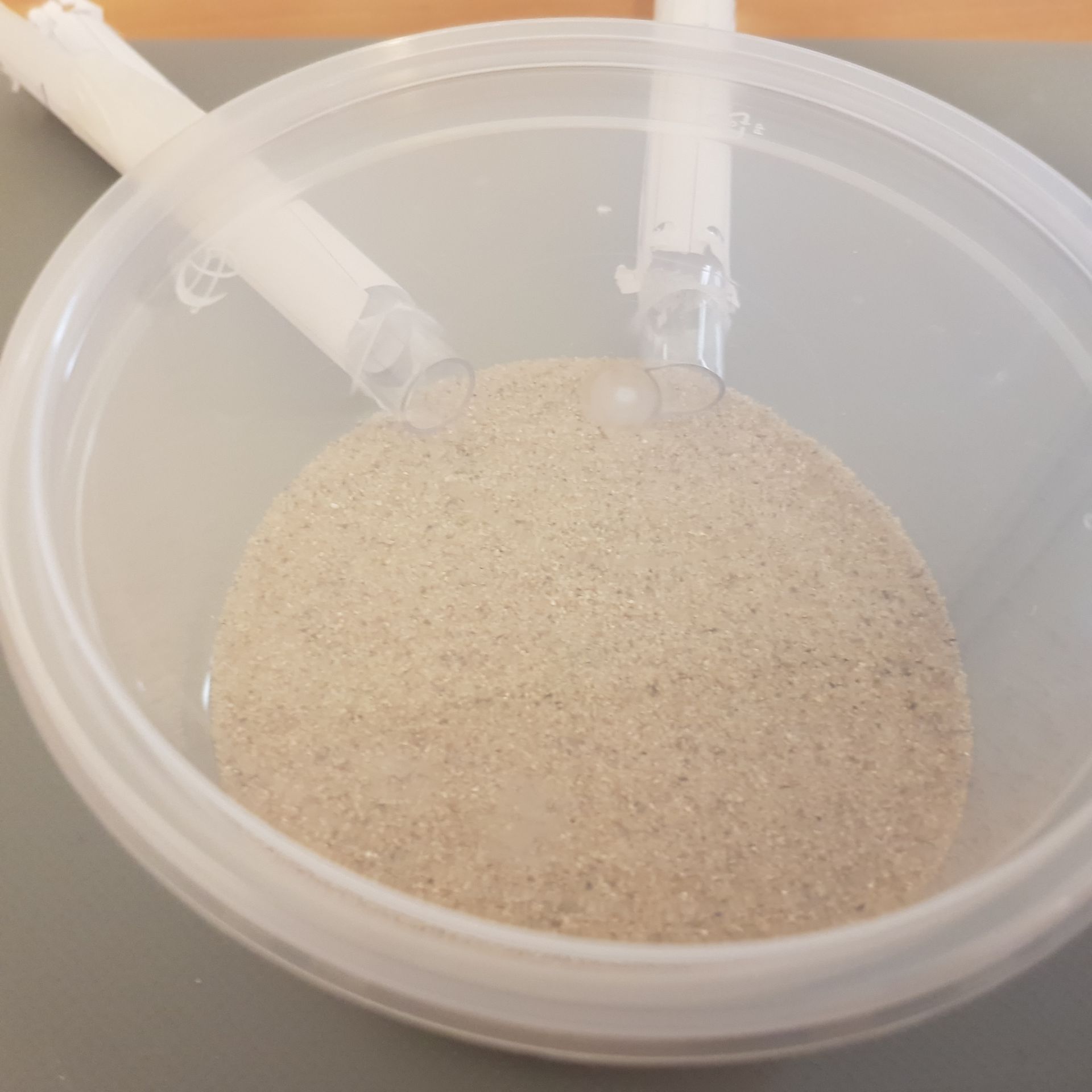 Their choice was clear. (Bad quality pic incoming)
You can see that the colony set up shop in the gel tube.
Something interesting I noted: there was a quite large gel droplet laying on the floor of the tube. They put a lot of their brood right on top of it. Perhaps to feed the larvae? Would love to know what that is about. 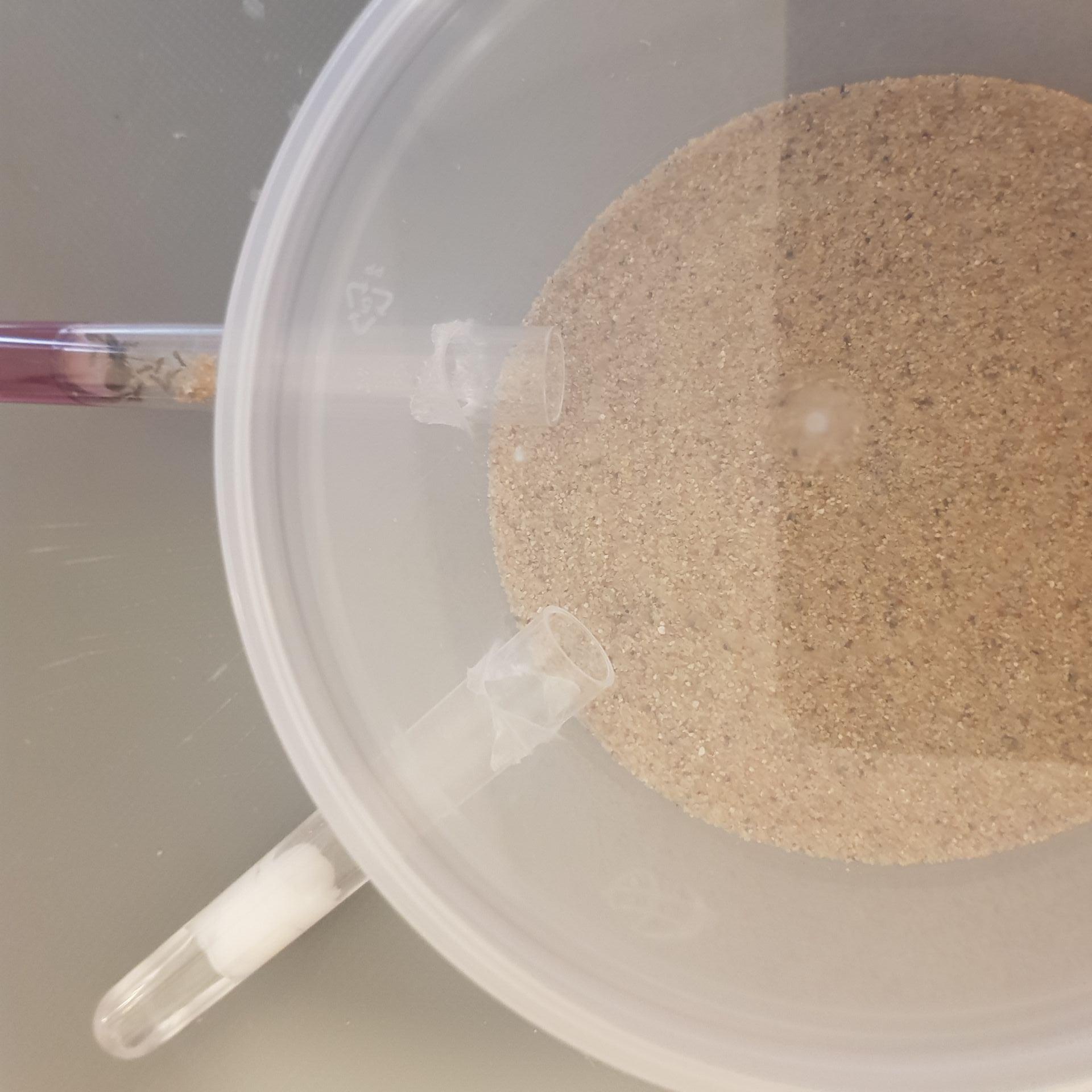 Preliminary conlusion 2: The ant colony prefers the gel tube over the conventional set-up.


Noteworthy: There is no statistical significance here. Don't consider this 100% true. The sample size is just to small. However, it looks promising on first glance.

I'd love some feedback! What are your thoughts? What can be done better? For what ant species would this work best?

This is an interesting idea, but many ants have important bacteria symbionts. I suppose it depends on the nature of the bacteria (whether they are in bacteriocytes or are gut-associated and how the antibiotic is distributed throughout the body) and also if those bacteria have resistance to those antibiotics. It's hard for me to see the benefit of this arrangement (besides just the fun of it and experimenting of course!)

I would think that the major contaminants of the agar wouldn't be bacteria though, they would be fungi (ie: yeasts/molds) which neither of the antibiotics you have used target. I think it is much more practical to use a typical distilled water + cotton/foam setup and then supplement carbs that way. This media isn't complete anyway, since it doesn't contain proteins, lipids and other necessary small molecules (ie: vitamins)

So, besides general impracticality, if you would like to continue experimenting I would add a broad spectrum anti-fungal or even anti-microbial compound such as nourseothricin or hygromycin and maybe even consider adding a protein source such as casein and maybe add a liquid multivitamin to fill in the nutritional gaps. I'm not sure how you would add lipids, though you would likely have to emulsify the fat with lecithin or something

Thanks for the feedback! I see you know your stuff.

Regarding the antibiotics, you're right about the penicillin/streptomycin.
The two isothiazolones in ppm are effective against fungi however. (Silva et all., 2020)  doi:10.3390/molecules25040991
But i'll definitely look into the two you mentioned, improvements would be great.

I'll add the vitamins in the next batch, I just didn't have them in storage at the moment,  but I won't add the lipids into the same set-up as the carbs.
I'd like to test lipids/amino acids without carbohydrates, and carbohydrates without lipids/amino acids.
My reasoning behind it, based on what has been said in former comments in this thread, is that the ants will be better able to control their own nutritional needs instead of the worker ants accidentally ingesting to many proteins.

But yeah, first i'll just stick to the carbs for developing colonies to see how it works out, and as you said, the fun of experimenting!

Hopefully later on, next nuptial flight or so, I can try out some of the things you said in a proper experiment. Emulsifying the fat sounds like a good idea!

Ah, sorry, I didn't read your journal careful enough and I missed the PPM -- that's a good addition I think

re: the lipids/protein, I have seen some commercial formulations: eg https://www.antkeepi...-protein-powder

Maybe you could make a similar concoction and add as a separate tube/feature in their outworld? That product linked above seems to by trying to get the complete suite of nutrients, though I definitely could see the benefits with separating out the three macronutrients so the ants can better control their diet as you mentioned

No problem man, I'm happy you corrected me regarding penicllin/streptomycin.

re re: thanks for showing me, i'll check it out! I definitely like the idea of adding that as a seperate tube tube as well.

Purple Murps:
These Murps have acces to a little outworld, and a different test tube with water. They have chosen to make their home in the gel tube instead of the water tube, and they are doing mighty fine there. No fungus has developed so far, and even a couple of new worker ants have appeared. I'll start counting them to be sure, however they're smaller than the others, and a bit green-ish, so I assume they are new?

Mellow Yellow Fellows:
These Fellows don't have acces to anything, accept for the gel. No water, just the gel. And these guys are also doing fine so far. Some new workers appeared, and no fungus has developed.

It also showed that they have been eating a bit from the gel. So proud of these guys.

-Pilot study going well. As a note for the next *proper* experiment, i'll increase the agar concentration to make the gel sturdier. Reason behind this: a queen butt kinda became stuck in the gel. She managed to get out though, no worries.

Good to see the outcome all positive so far!

Thanks Chickalo! Happy that you're happy.

Purple Murps:
The gel of the purple murps turned out to be to soft, to squishy, more ants got stuck in it as the gel slowly started to move. Easily fixed by increasing the agar concentration, but for now they are relocated into a normal water tube with a little sand outworld. - The gel is being eaten, that's a good sign.
- Furthermore, no fungus has developed, even though they deposited some waste stuff on top of the gel.
- They increased in numbers, from 8 at the start, to 16 now, and they have a BUNCH of eggs in different stadia of development laying under the queen.
Perhaps they should be fed more insects. I have given them none so far.
- When I do this experiment again, I'll definitely increase the agar concentration two-fold at least. I'd like to see a gel with more integrity. Would be cool if they can dig through it as well.

As far as these pilot results go, the yellow gel seems to function best.
I wonder if you have any feedback? What should be done next?

//edit: my picture taking skills suck//
//eggs are difficult to see on this pic//