59 replies to this topic

After shipping delays due to Rona my Myrmecia Forficata finally arrived in the mail.
This is my first time keeping this genus and I'm fairly new to antkeeping in general with my 2 other colonies both being Rhytidoponera Metallica. But I've done a lot of research and I'm feeling confident.

I haven't decided on a name for this beautiful queen, but she's currently in a tubs and tubes set up and came with 7 fairly small larvae. As of now, she's received manuka honey and half a mealworm. I also moved a power point up to her tub for warmth as it is quite cold here in Sydney.

This should be an interesting journey and I'll be sure to keep u all updated.

And also don't forget that larvae need substrate to spin their cocoons. Eating mealworm, larvae should have another few weeks of growth ahead, no eggs at present.

The queen has been accepting a steady supply of mealworm halves which the larvae eat in around 2 days, they are absolutely voracious 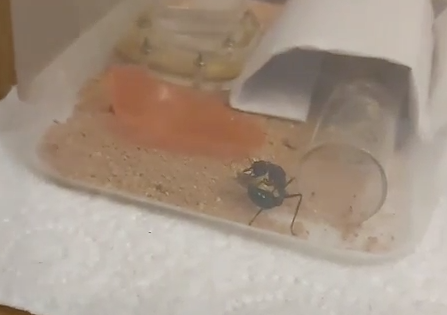 Here is the queen stinging a still wriggling mealworm Larvae have increased in size after a little over a week, I will be moving them onto crickets soon since they have been eating almost exclusively mealworms

If you're giving her crickets, give her smaller ones if you're feeding them live or you can just kill the cricket and give it to her, the reason is that crickets can be dangerous if fed live because they can injure your queen by kicking or biting her.

If you're giving her crickets, give her smaller ones if you're feeding them live or you can just kill the cricket and give it to her, the reason is that crickets can be dangerous if fed live because they can injure your queen by kicking or biting her.

Its been the 2 week mark now, and the larvae are polishing off their first cricket, they are significantly larger than when I first received them and seem to be growing at a rapid rate. They are absolute eating machines and are always to chow down on food immediately after finishing the previous item. This is in contrast with my 2 rhytidoponera colonies which haven't eaten much over the winter but maybe its because I've been heating my bull ants. I counted 6 larvae today so maybe 1 of them was consumed but i'm not sure since I didn't have a super close look as mother hen was standing over them. Either way I expect them to start pupating sometime in the next couple of weeks.

The queen has been fairly bold, coming out to take a look whenever I'm doing maintenance in the area I wonder if she has begun to associate my presence with food? 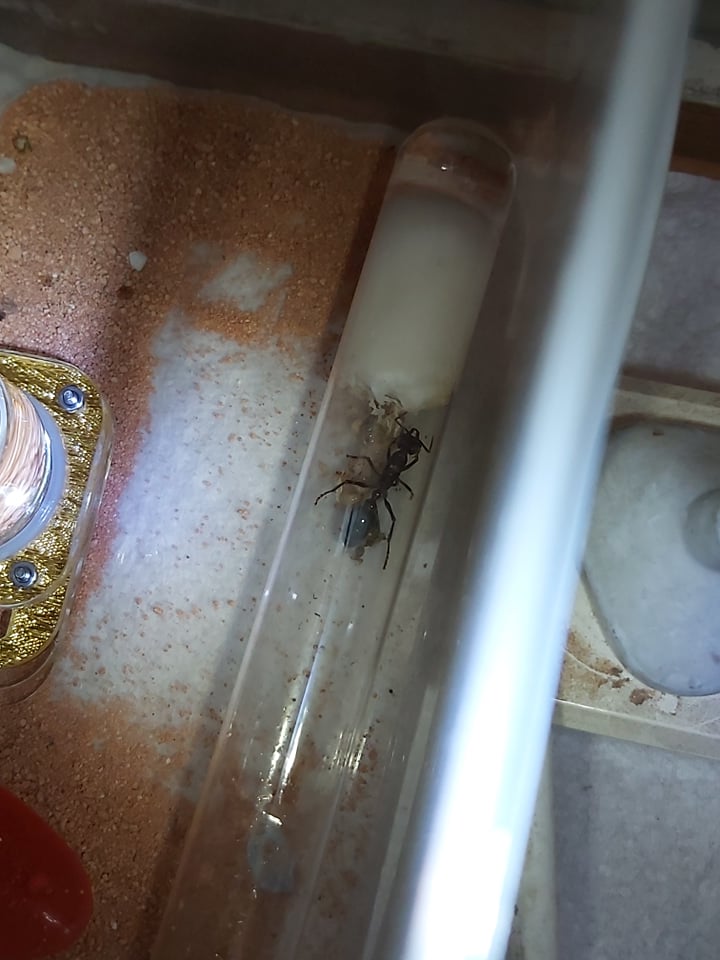 Such a cool looking queen!

Good luck, on my list to get one day. Following closely

No photos this time since I don't want to disturb them, but they are still eating continuously, as soon as one carcass is dumped, they are onto the next one. The queen really lives up to their reputation as bull ants, she is extremely aggressive and bold. Most of the time when I open the lid of the tub she comes rampaging out with jaws wide open ready brawl. She follows movements outside of the tub really closely as can be expected by the excellent vision of Myrmecia and is very reactive to things going on. I hope that doesn't mean she is more easily disturbed, I've got my fingers crossed she doesn't get overly stressed and consumes her lavae I noticed some water in the test tube so I checked to make sure there wasn't any flooding, thankfully things are fine in there and the brood are doing well. There has been a lot of condensation building up on the walls of the tub these past few days from the cooler temperatures which I wiped up. The liquid feeder has somehow managed to release  a lot of water into the outworld sand as well.

I decided to do something today about the condensation that was building up each morning to save myself the bother of wiping it up by switching her sugar water dish (a kfc spoon) for some of the old honey lying in my pantry. I had heat it up to decrystalise it but it tasted fine so that's what she's getting until I get some new honey. Larvae have grown marginally larger and are currently alternating between mealworms and crickets. Check out that cute face The larvae are getting real close to pupae size now, they seem to get noticeably larger with each food item. Their sheer growth rate has been a pleasant surprise since their heating is pretty minimal and its still fairly cold right now. The queen also looks physogastric so I'm expecting more eggs once the larvae spin their cocoons.

I'll update this thread again when I have pupae. Since my Myrmecia are in do not disturb mode, but are still accepting food so we don't have pupae yet, I thought I would show the naturalistic setup for one of my Rhytidoponera metallica colonies. These are another iconic australian ant and are metallic green with an extremely hard exoskeleton, its like those things are made of rocks. They can sting but they can't climb so they are easy to contain.

I made the mistake of putting a relatively small colony into a dirt setup so I barely see them out especially since its cold currently. I have a 2nd colony which I will be selling so I'll get some pictures of them once I have extracted them tomorrow. The dual queen metallica colony has now been extracted mostly by shaking them out of their old test tube. They milled around the tray for a while but have since taken up residence in the new test tube and rescued all of their brood. This does seem to be a pretty robust species as they seem pretty unfazed and enthusiastically took some honey today despite having a stressful past few days.